Construction at cathedral progresses in preparation for 175th anniversary of diocese 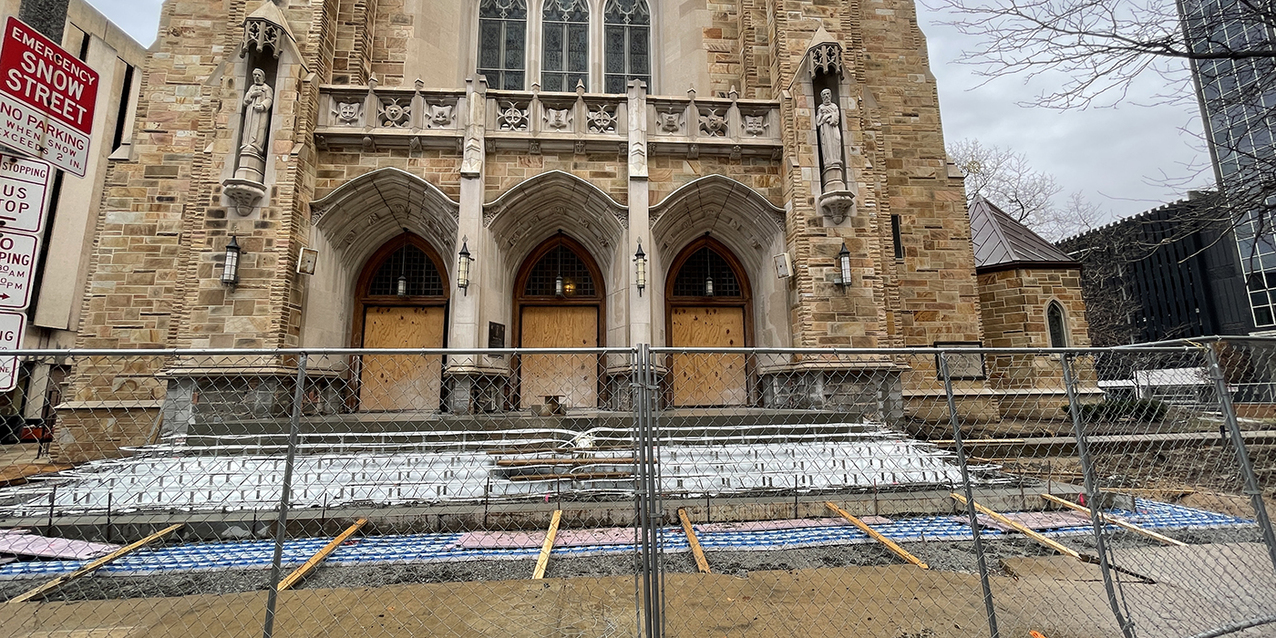 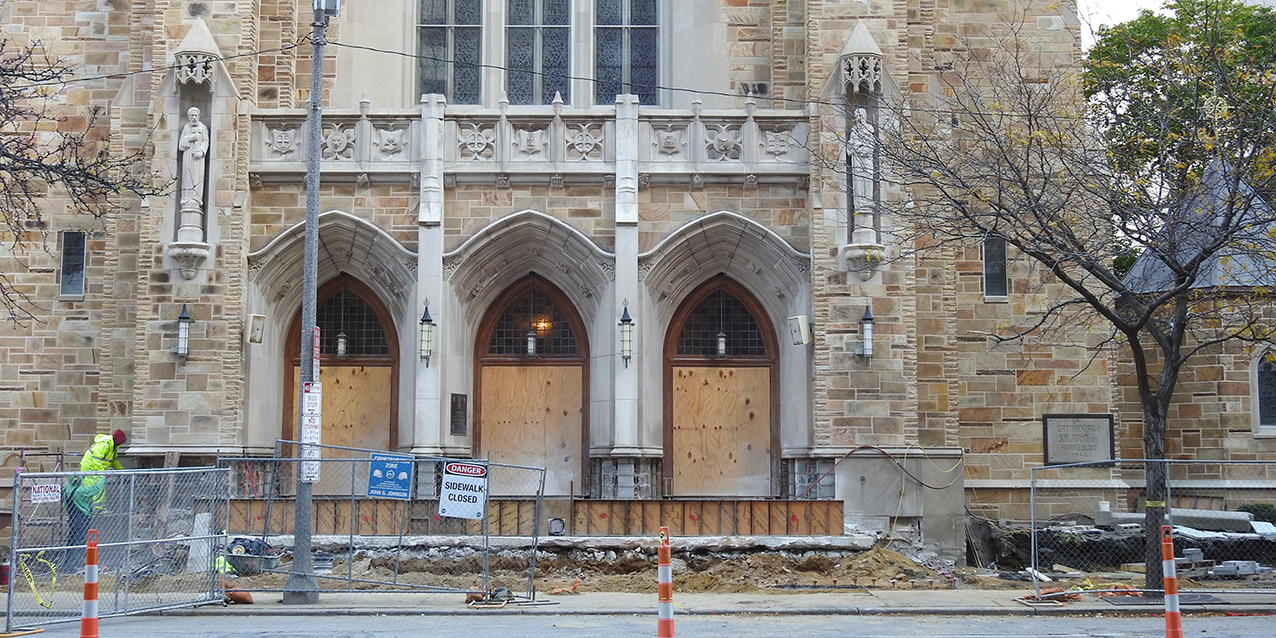 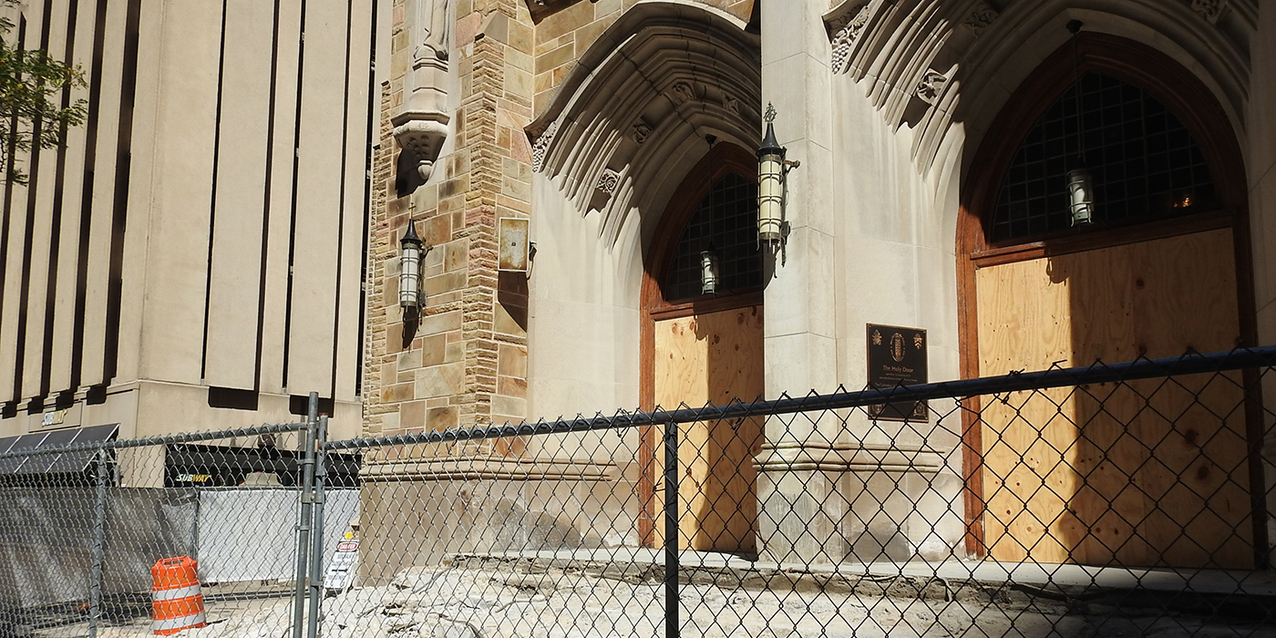 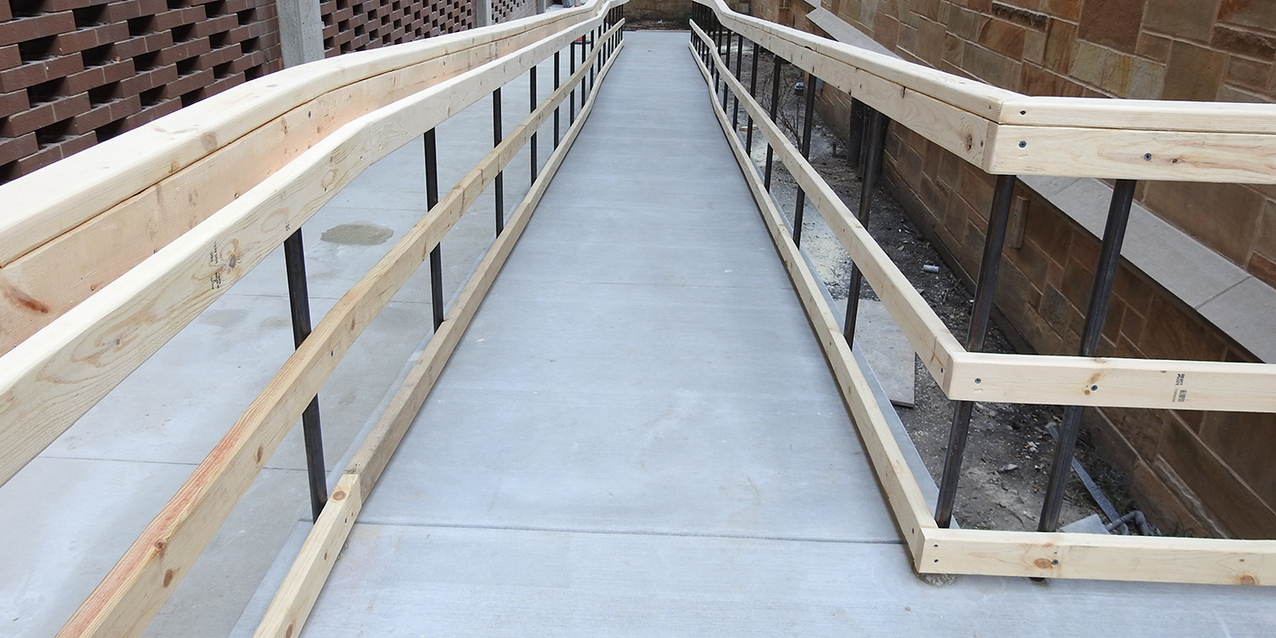 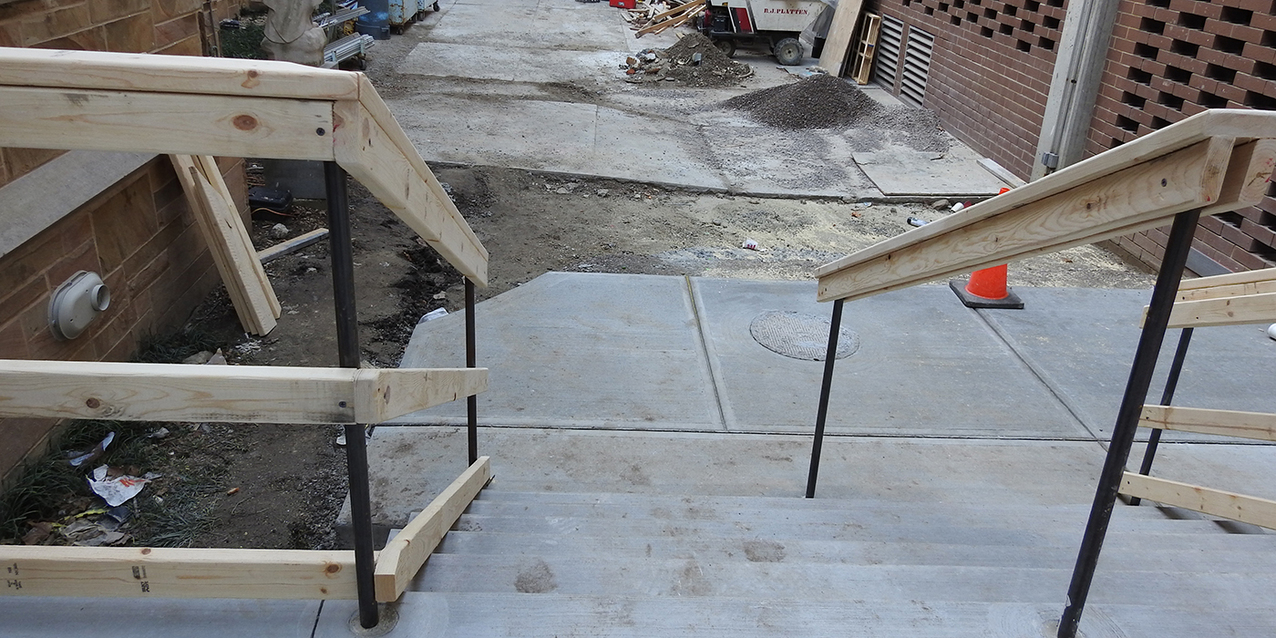 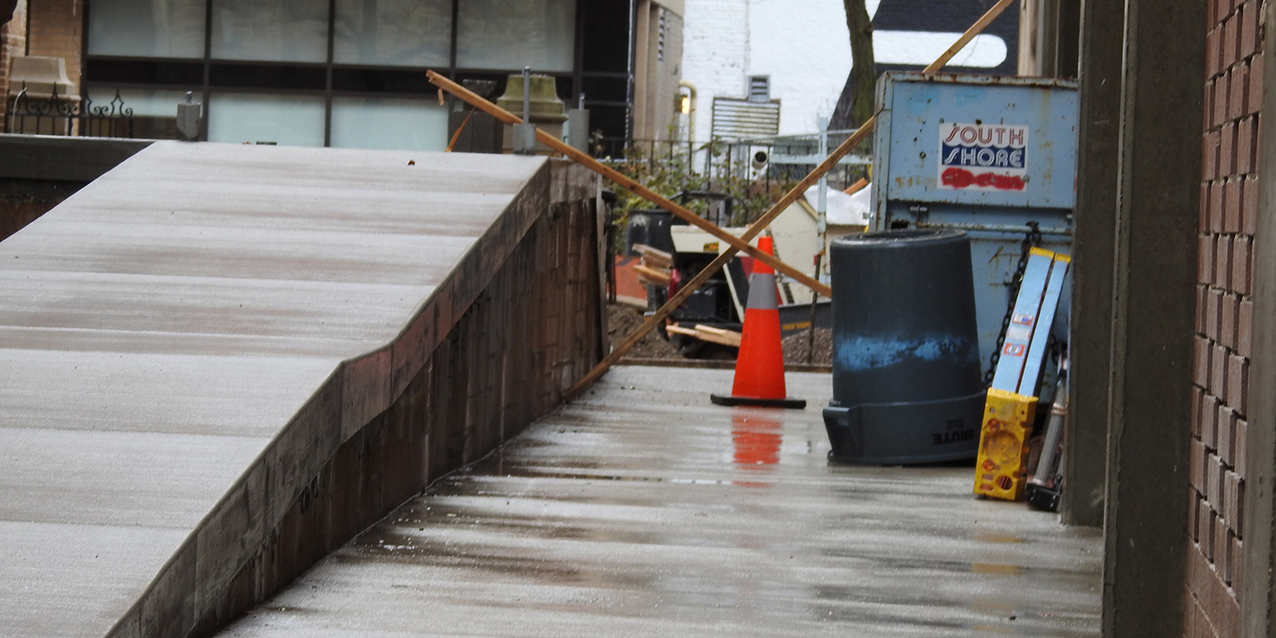 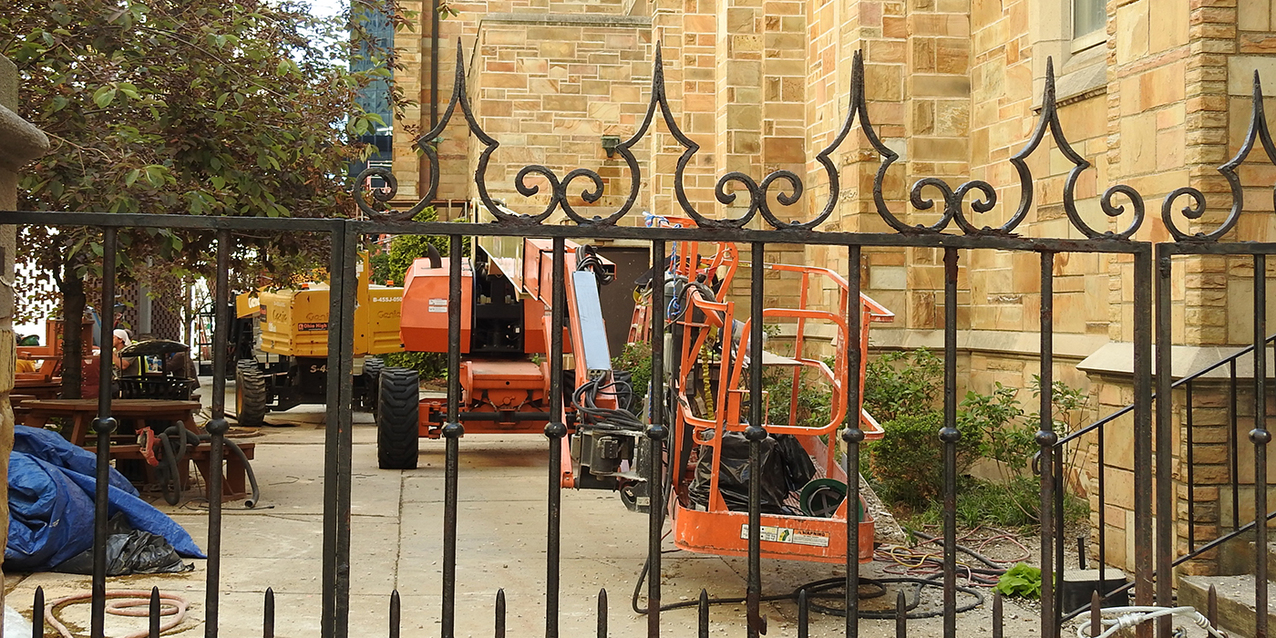 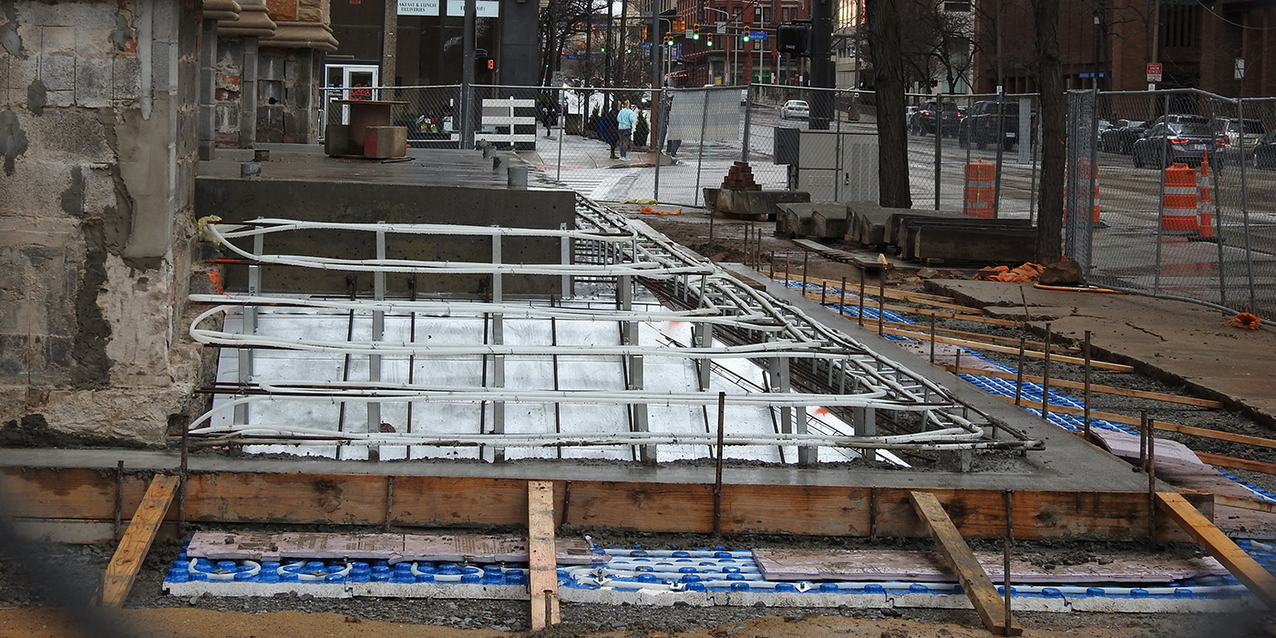 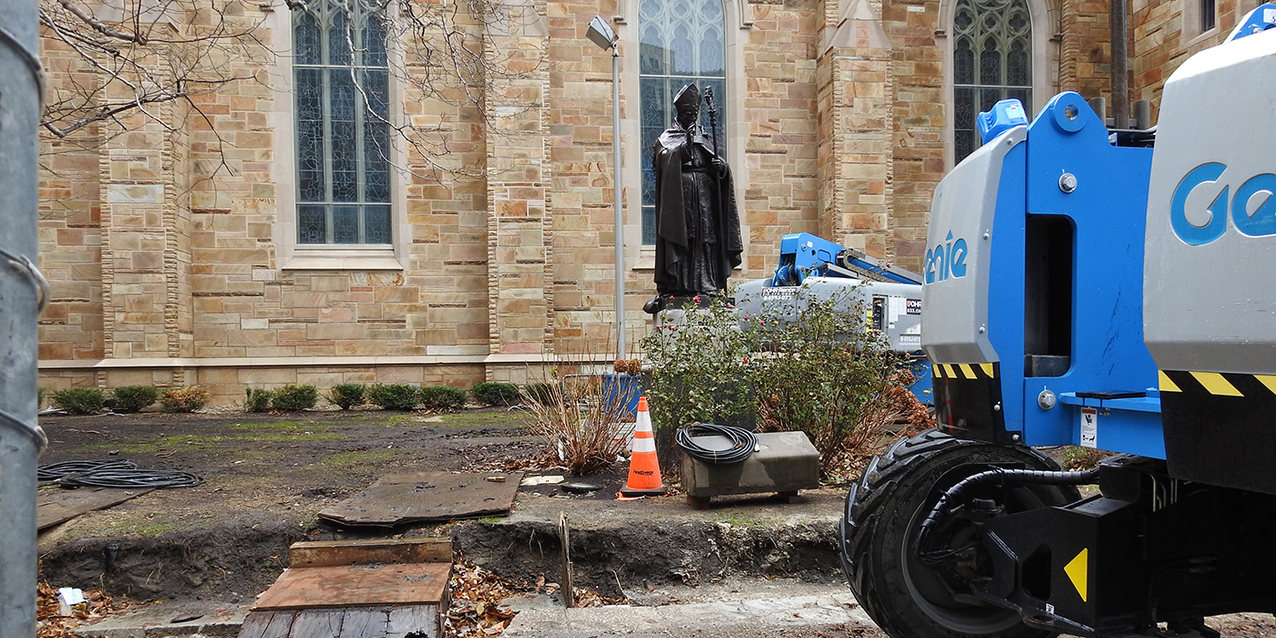 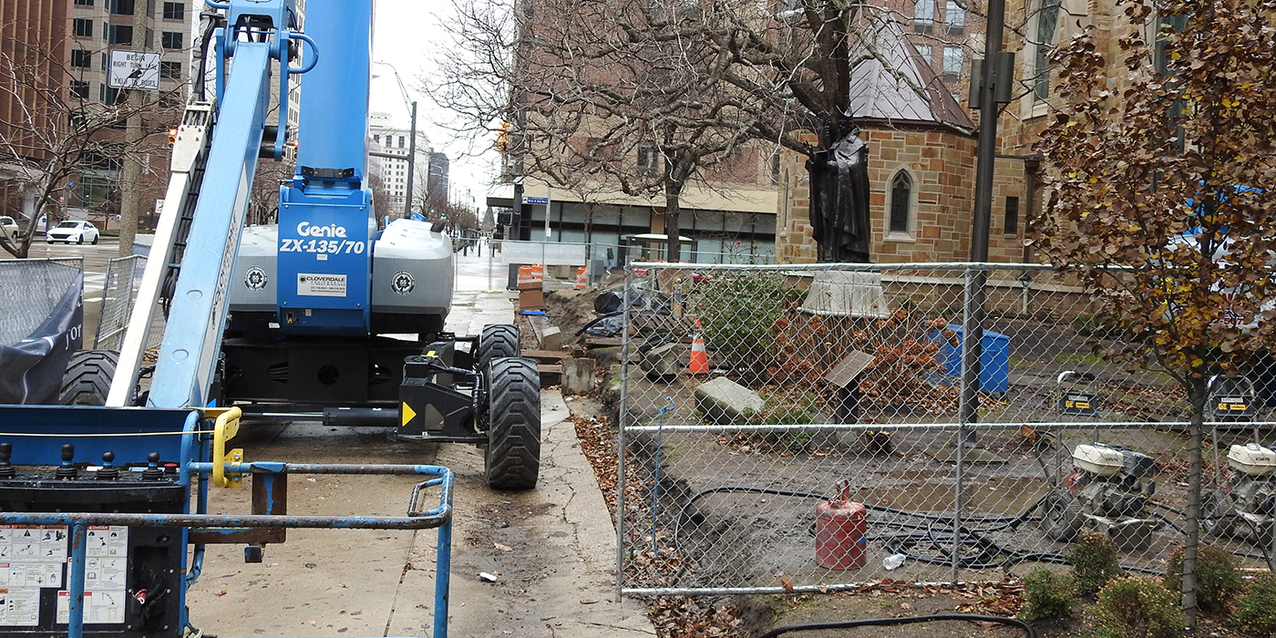 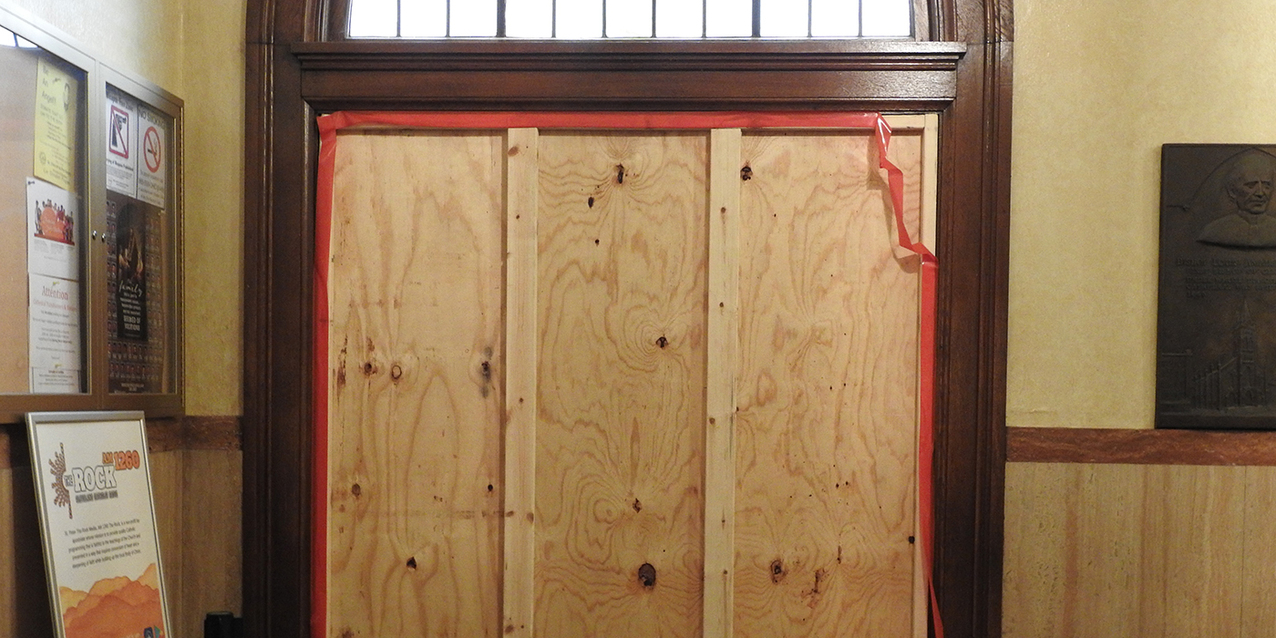 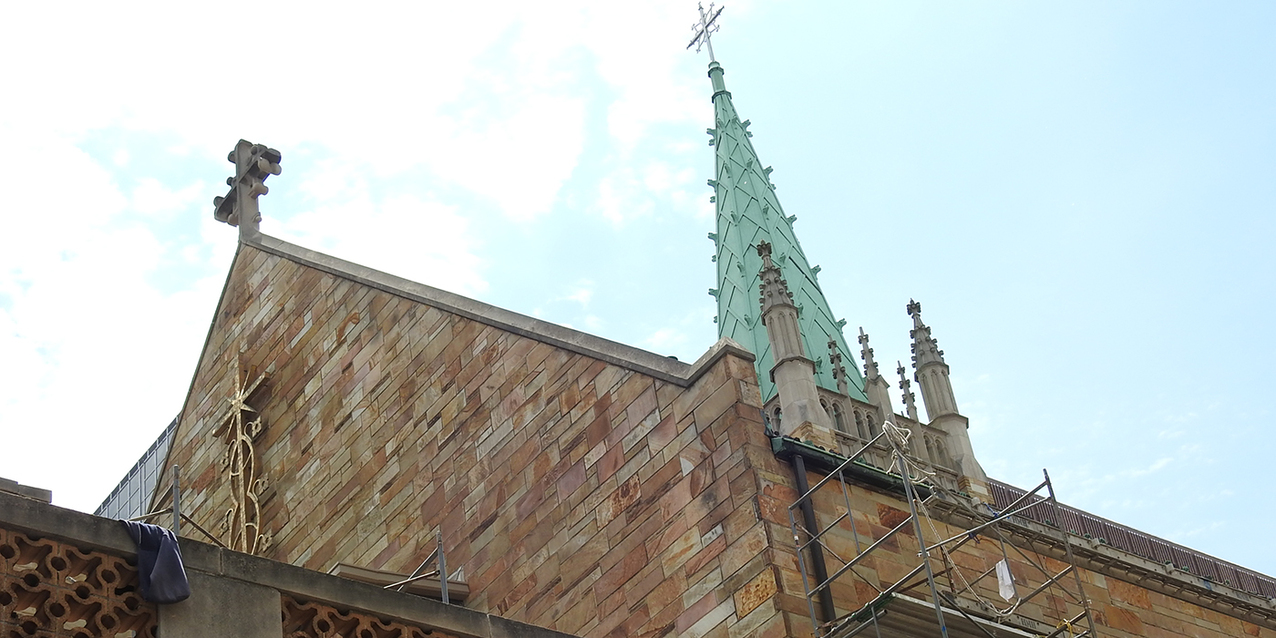 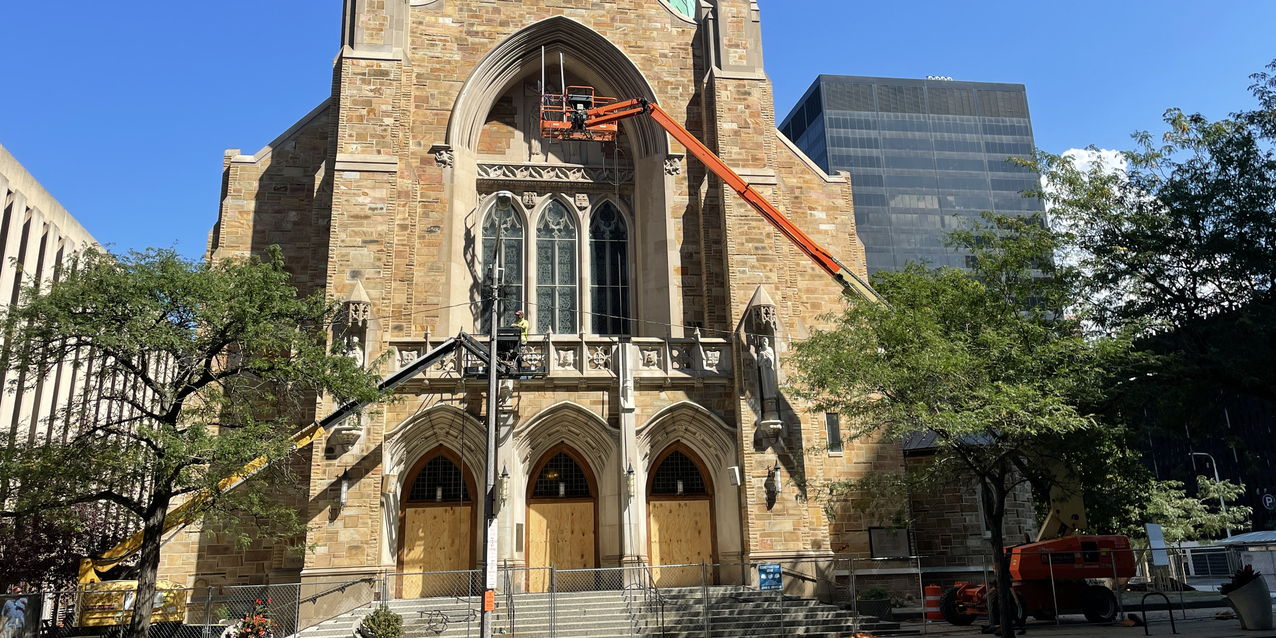 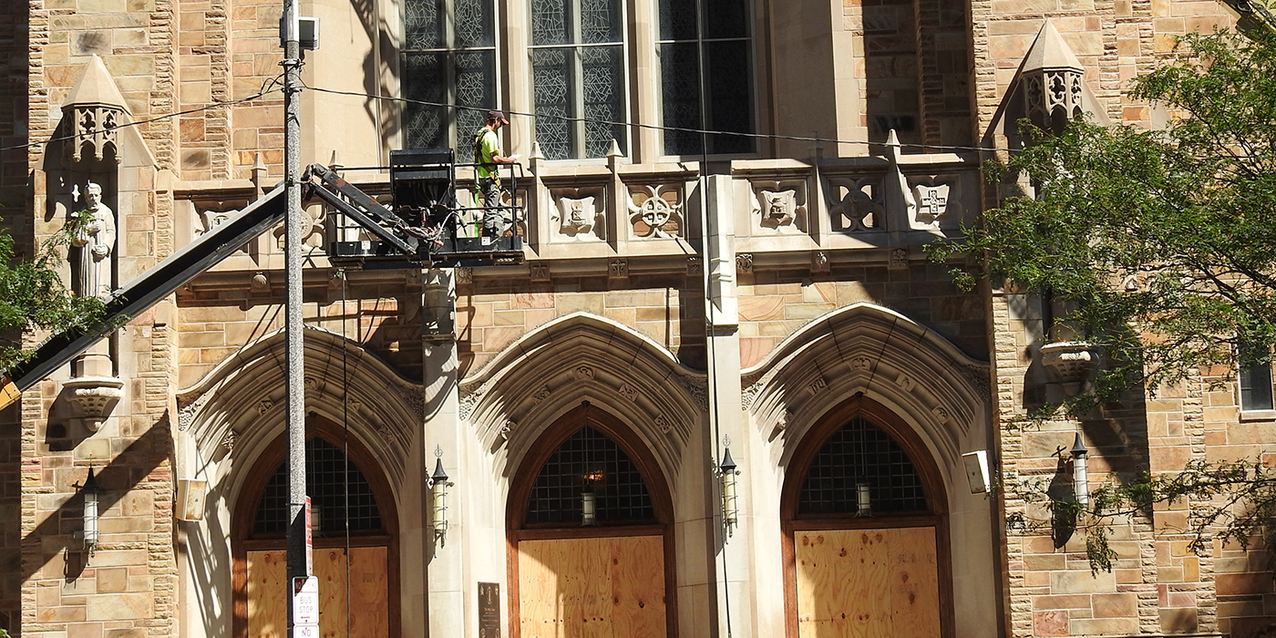 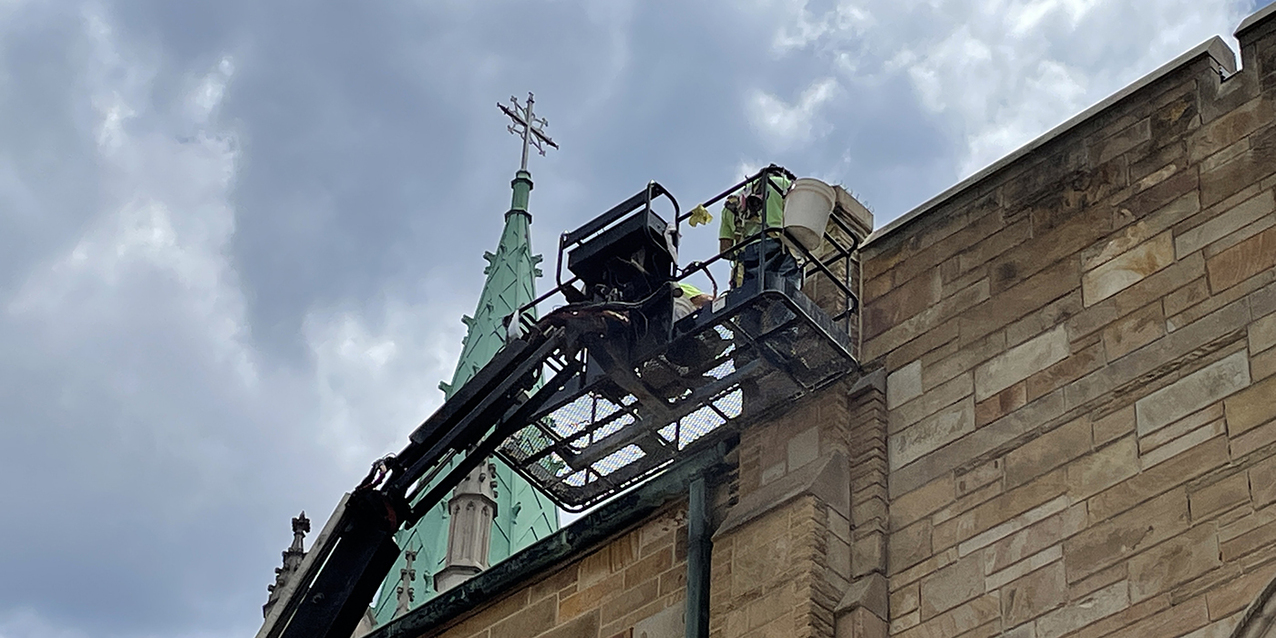 The ornate, white oak main doors of the Cathedral of St. John the Evangelist are being sanded, coated with a new polyurethane finish and new hardware, hinges and handles installed. (See the photo gallery above.)

Work on the front steps, which were removed and rebuilt, is nearing completion. The handicap ramp on the north side of the building has been reconstructed and is awaiting a permanent railing. The temporary ramp that was installed at the Superior Avenue entrance will be removed.

Repairs to the courtyard area on the north side of the building will be finished in the spring.

For about six months, construction crews have been hard at work to repair and restore the exterior of the cathedral – the mother church of the Catholic Diocese of Cleveland – as the diocese prepares for its 175th anniversary in 2022. The diocese was established April 23, 1847. Bishop Amadeus Rappe, the first bishop, began construction on the cathedral in 1848.

“This is the first major exterior project at the cathedral since the 1948,” said Bill Brady of the Diocese of Cleveland Facilities Services Corp., which manages diocesan properties. The cathedral was extensively renovated and enlarged 1946-1948 to celebrate the centennial of the diocese.

Brady said people may not realize some of the work that has been done, but it is important to keep the historic building in good condition. For example, heating elements were installed under the new steps, handicap ramp and will be installed in the courtyard and other areas around the perimeter of the church. Brady said this will melt snow and ice, making the walkways and steps safer. By reducing the use of salt, the concrete also should last longer.

“The front steps and railings will be illuminated,” Brady said, as well as the spire/bell tower. Temporary lighting is expected to be on the spire during the Christmas season. When complete, Brady said the colors of the lights can be changed as desired for special occasions or seasons.

A major exterior addition will be a 4-foot by 7-foot LED monument sign that Brady said will be installed outside the cathedral. The sign required approval from the city of Cleveland.

Sandstone all around the cathedral was carefully cleaned and tuck pointed. The roof was checked. Flat rubber roofs were replaced.

There also were improvements to drainage, air conditioning, electricity, etc.

Brady said the second phase of the project, which includes a new sound system in the cathedral, improved interior lighting, cleaning the frescos, painting walls and more will begin in early 2022.

“We want to keep this beautiful building in top shape so it lasts another 175 years,” Brady said.