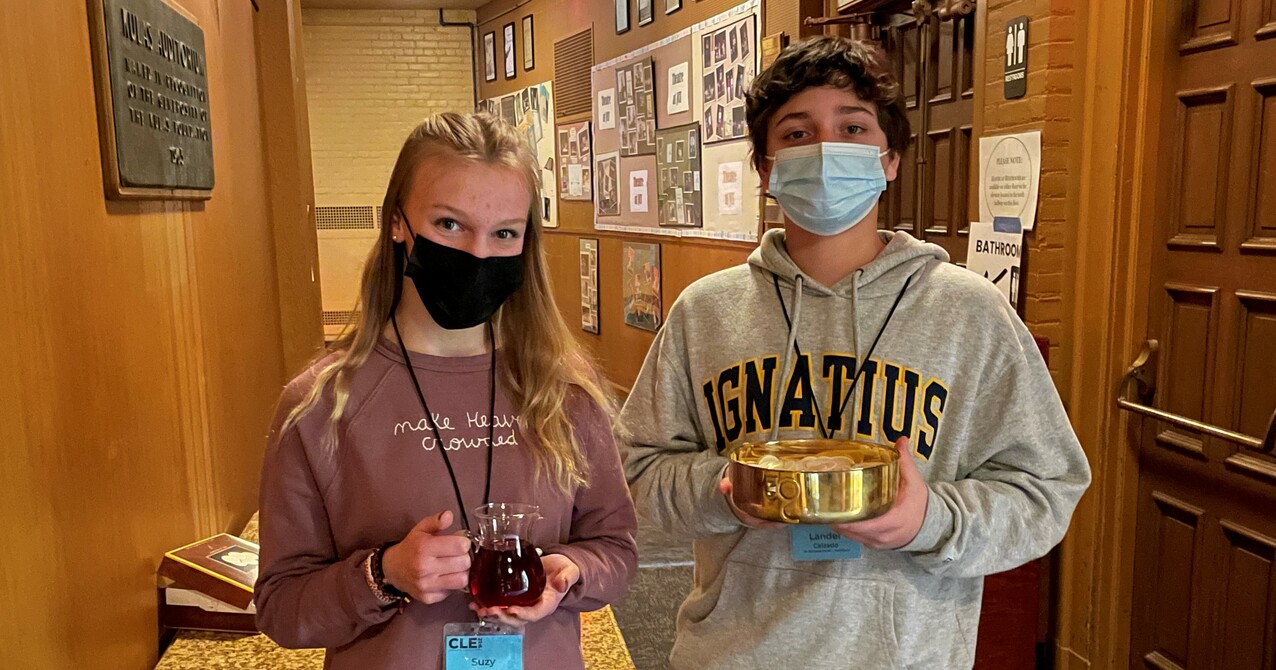 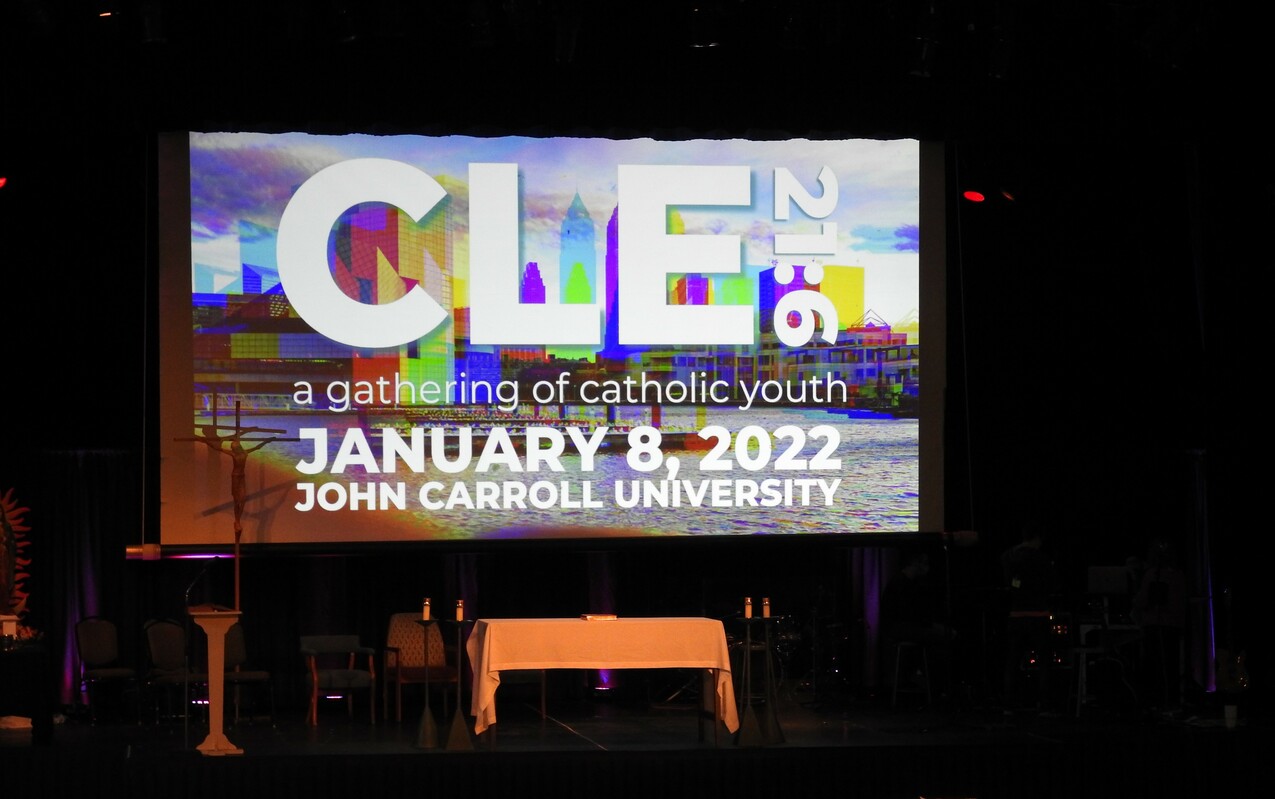 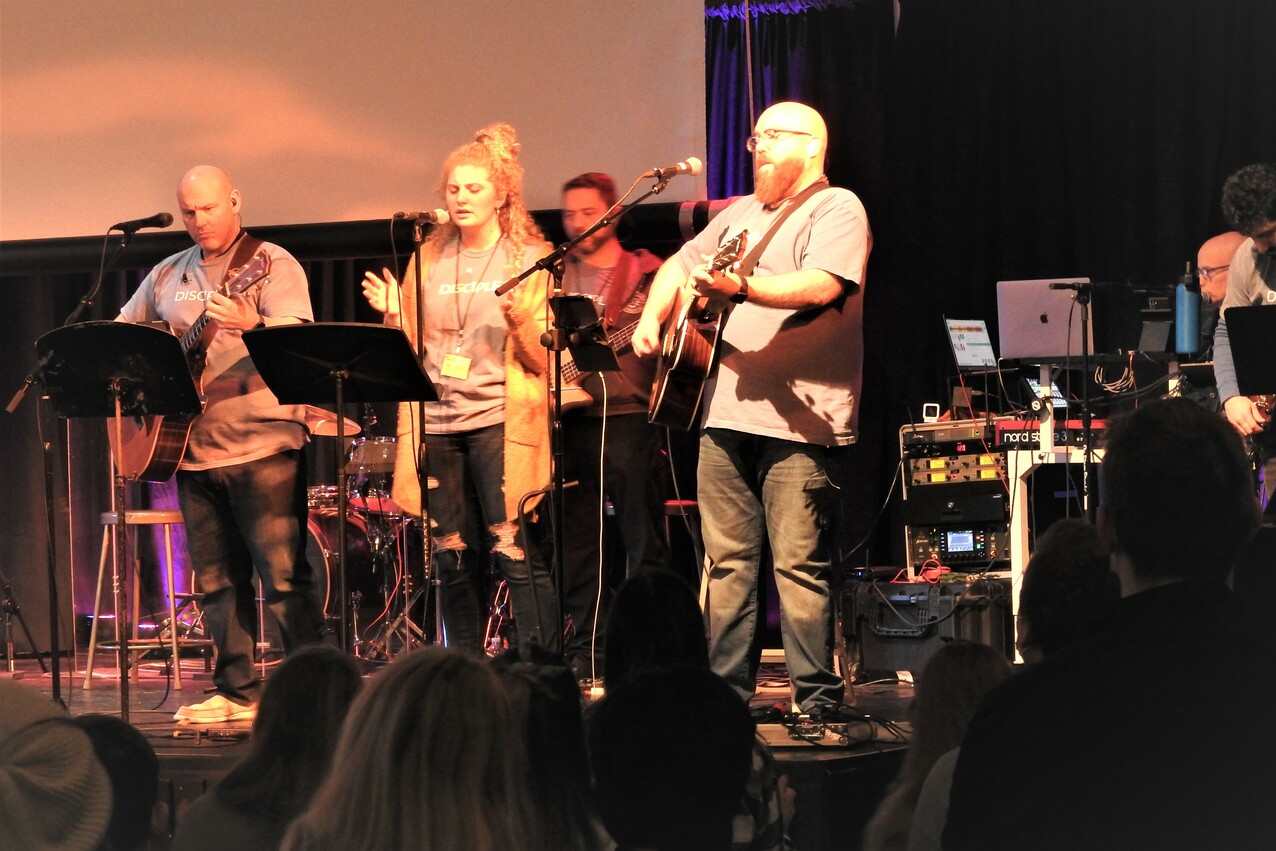 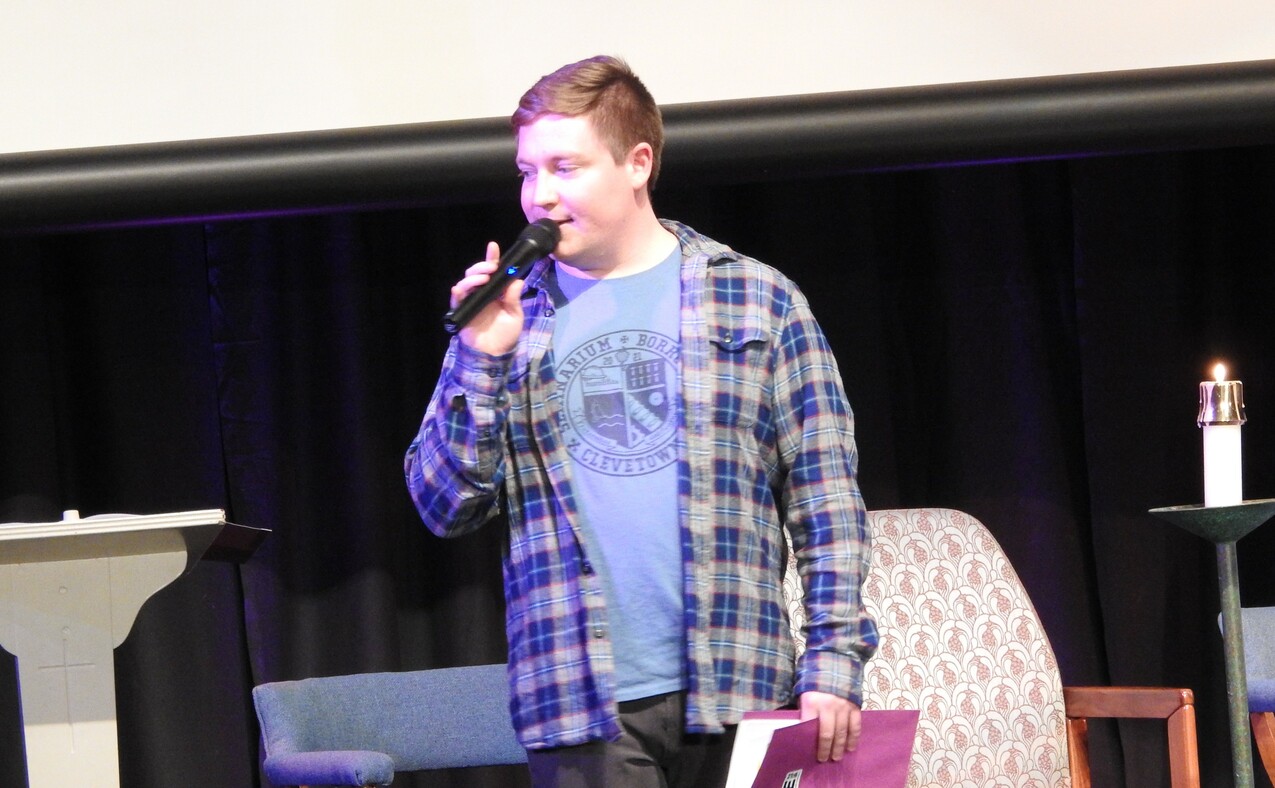 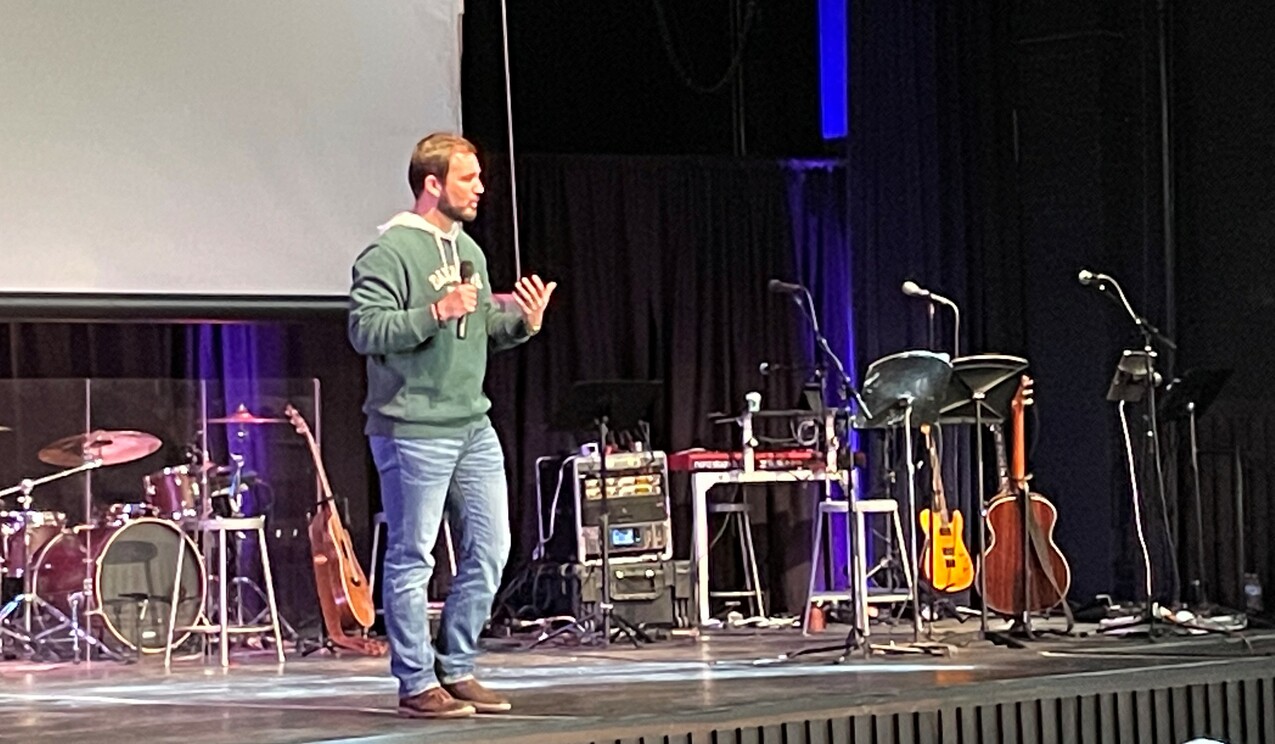 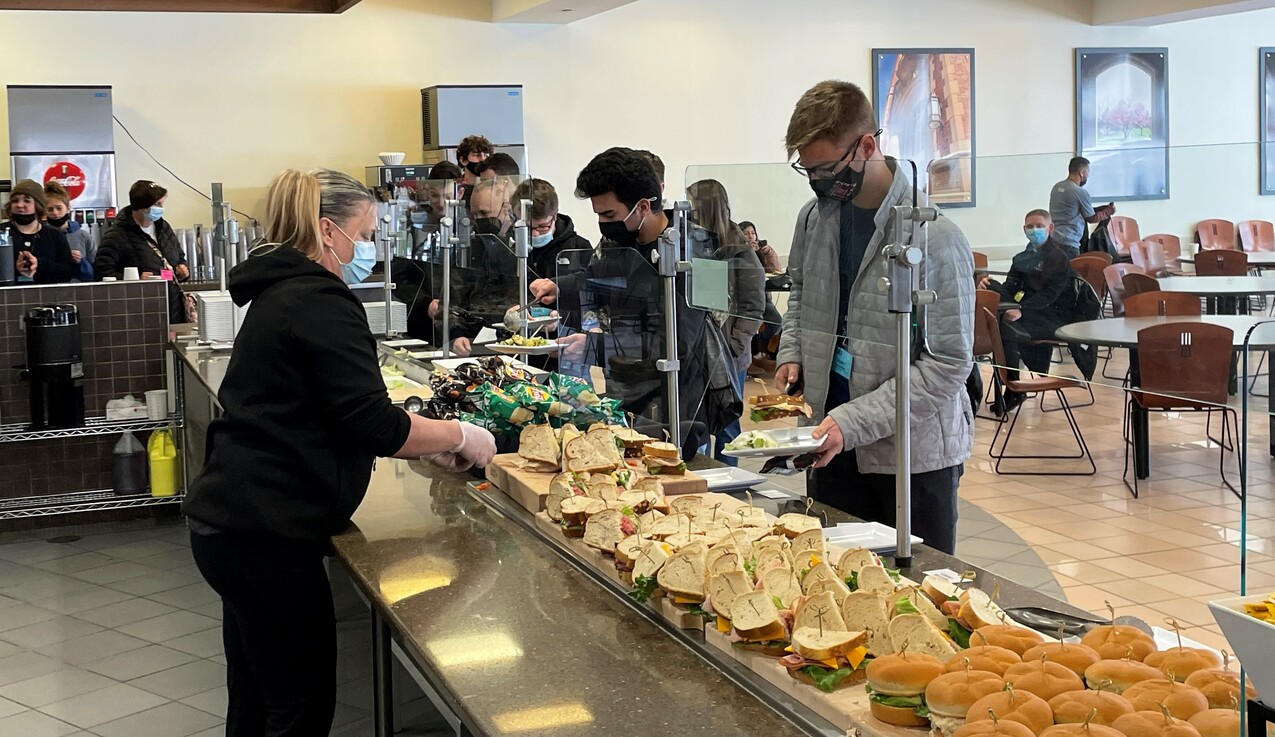 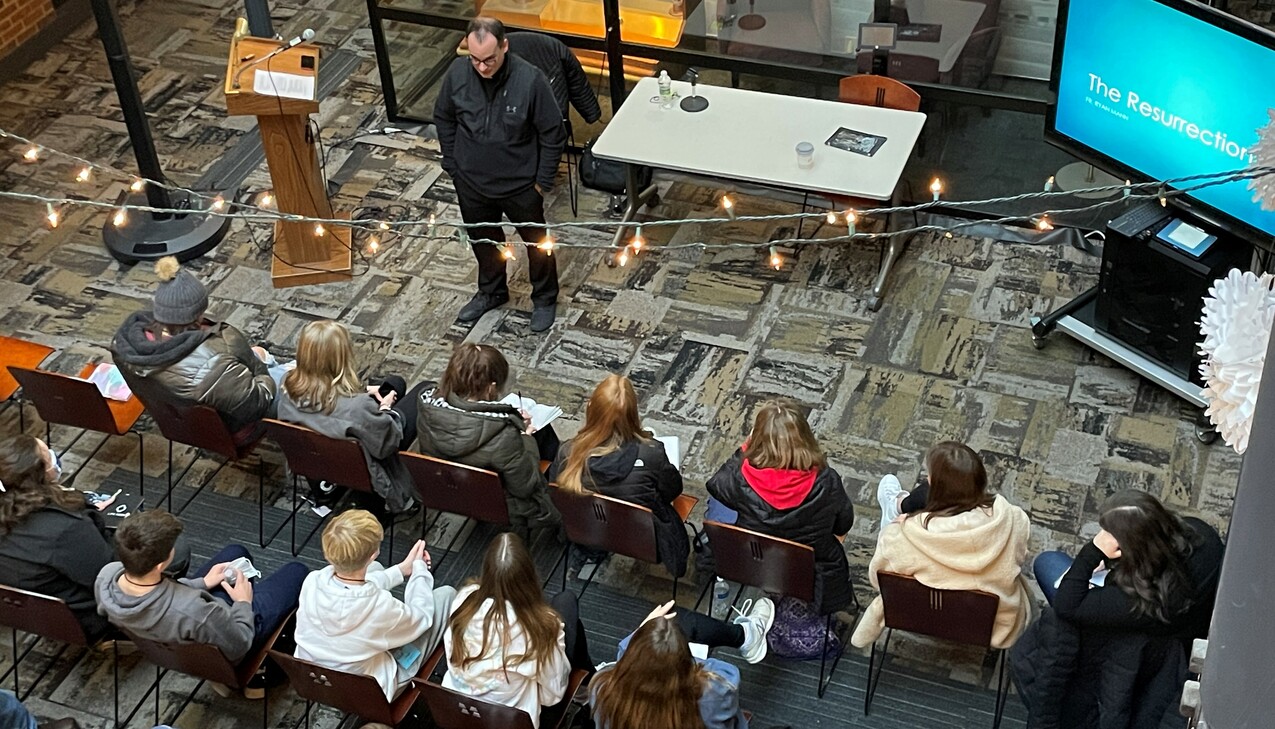 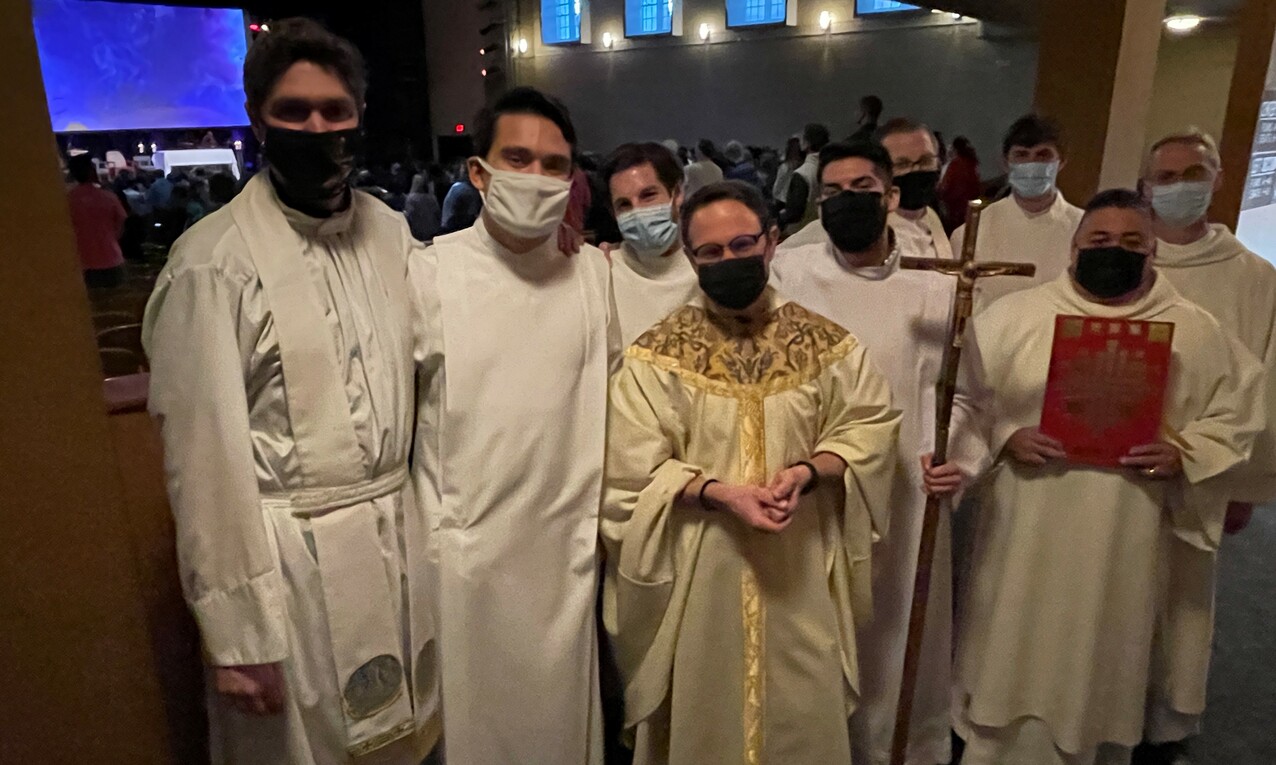 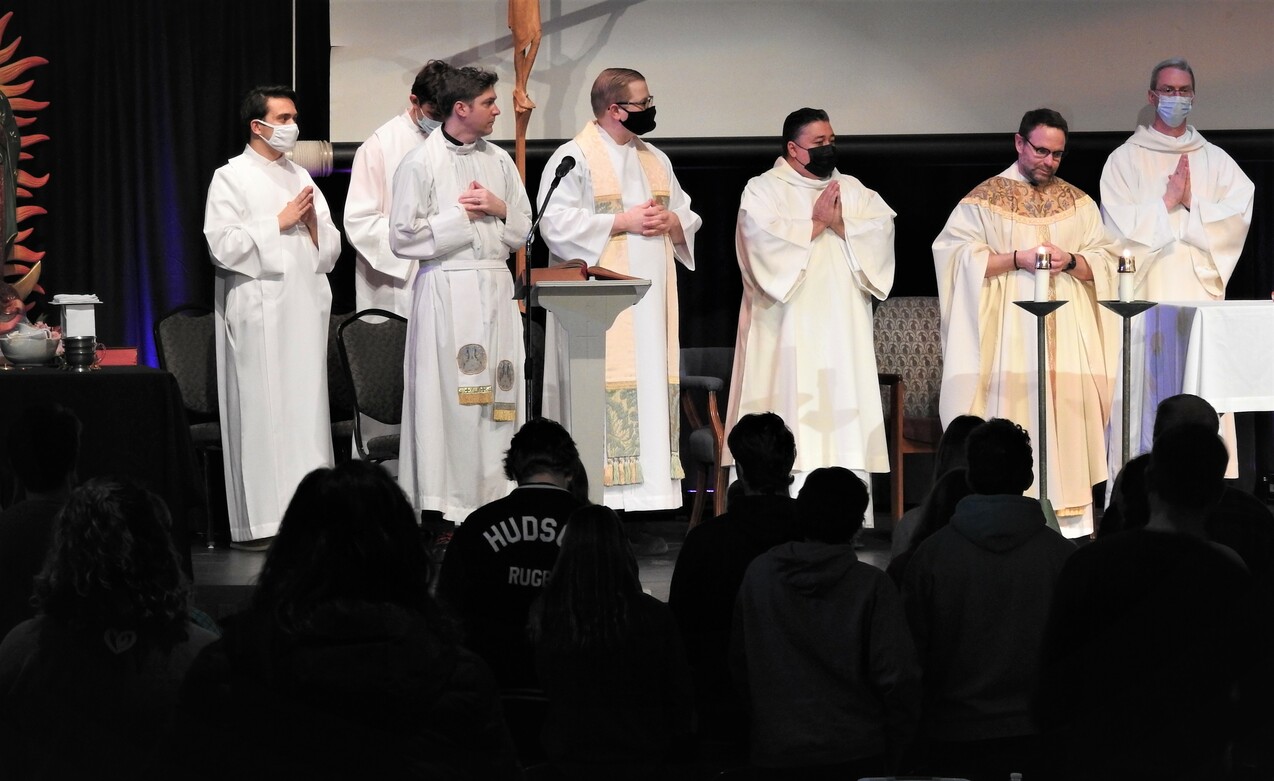 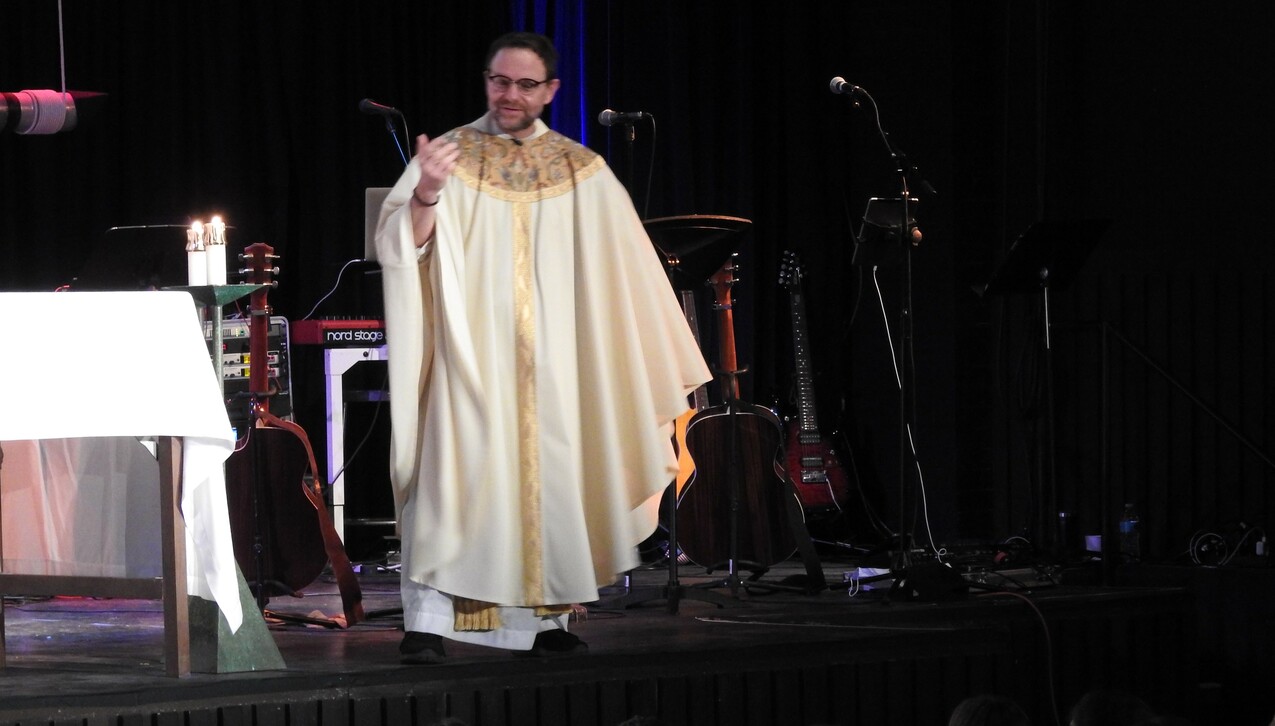 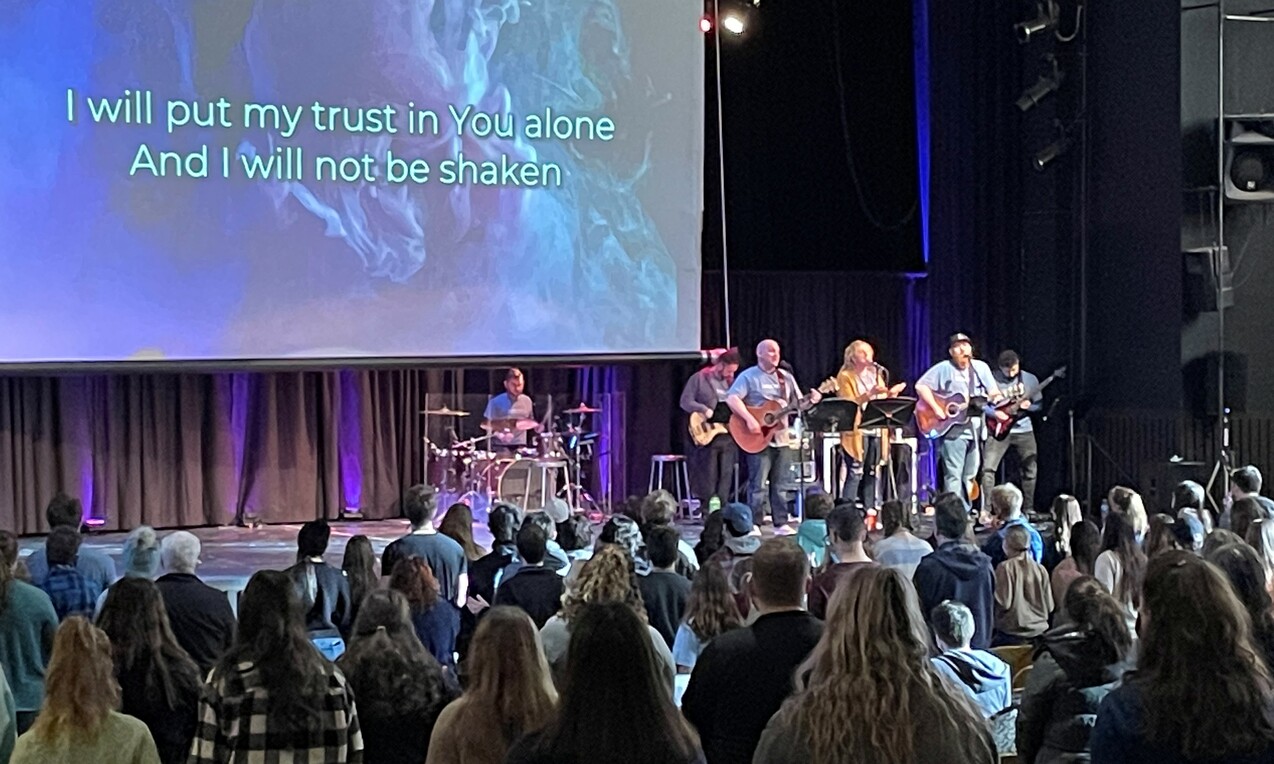 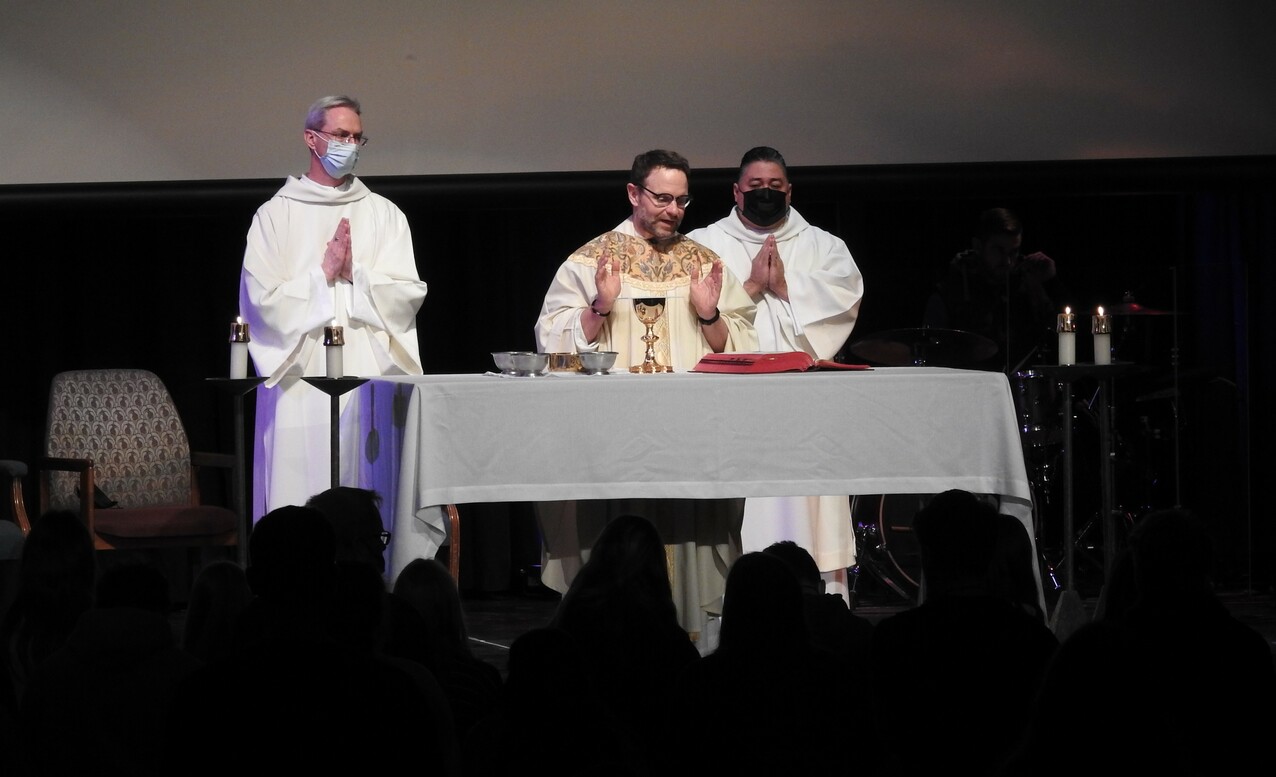 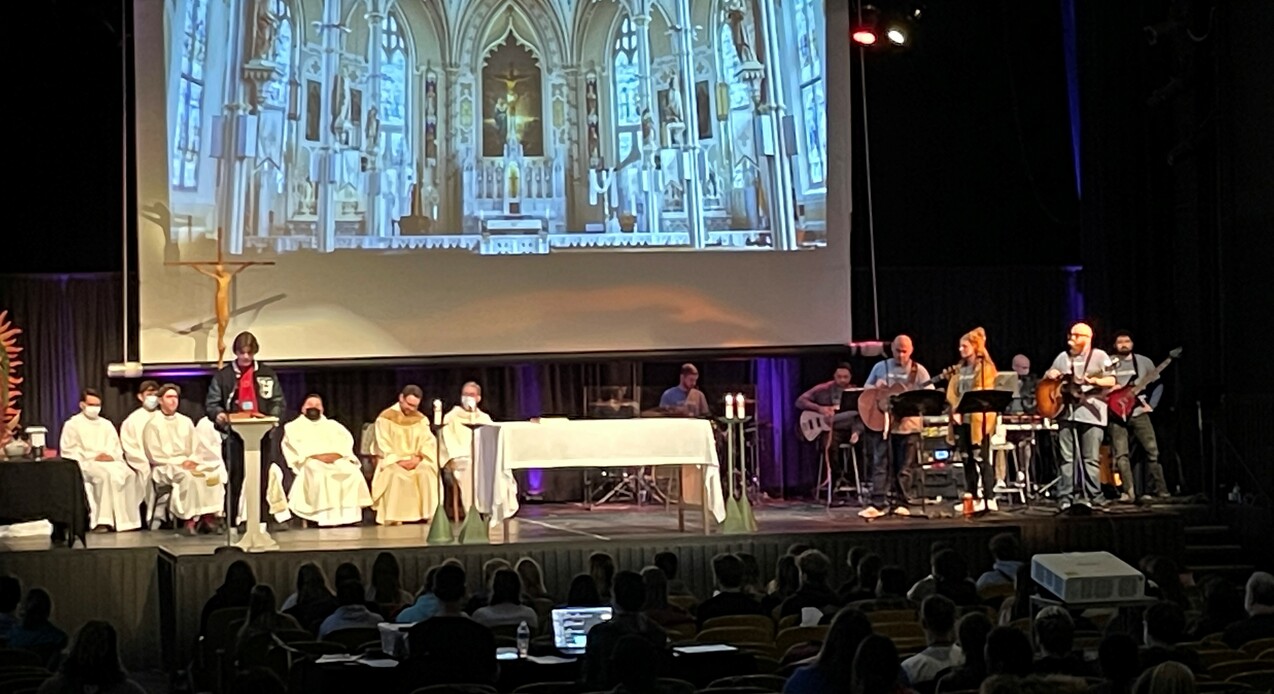 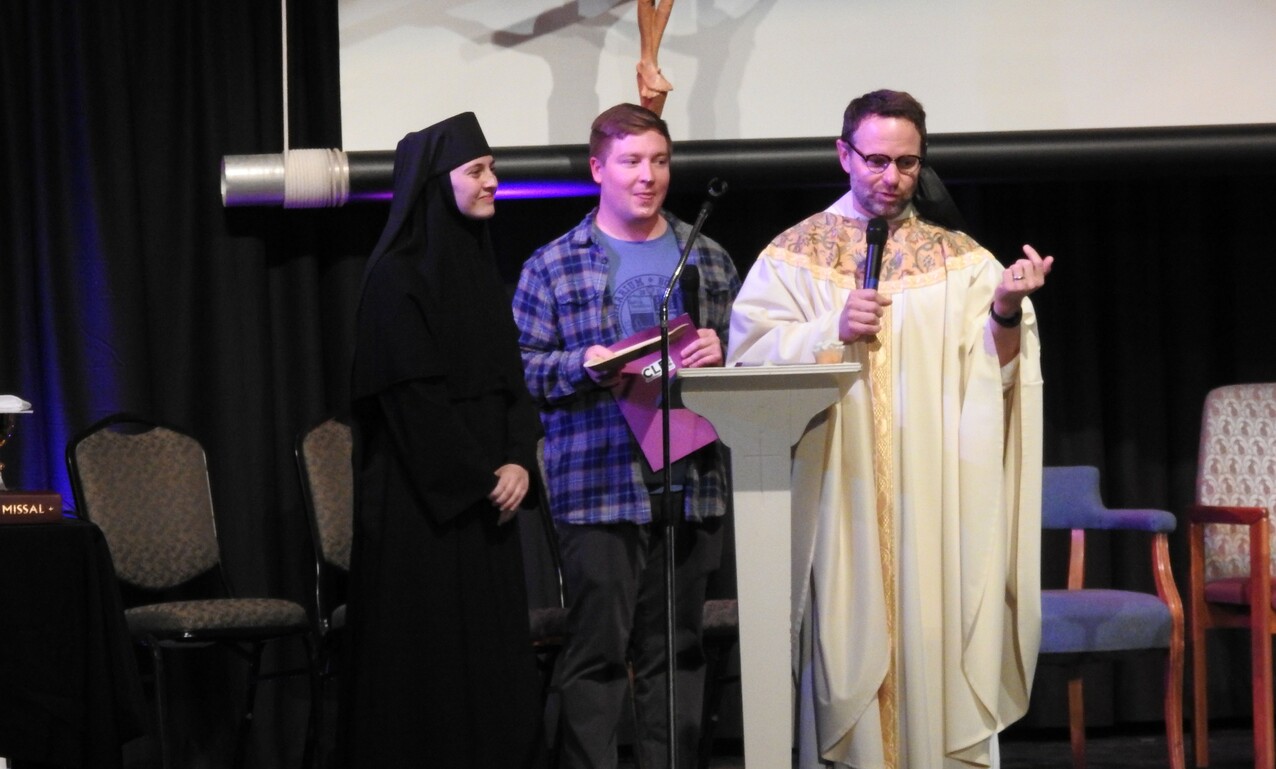 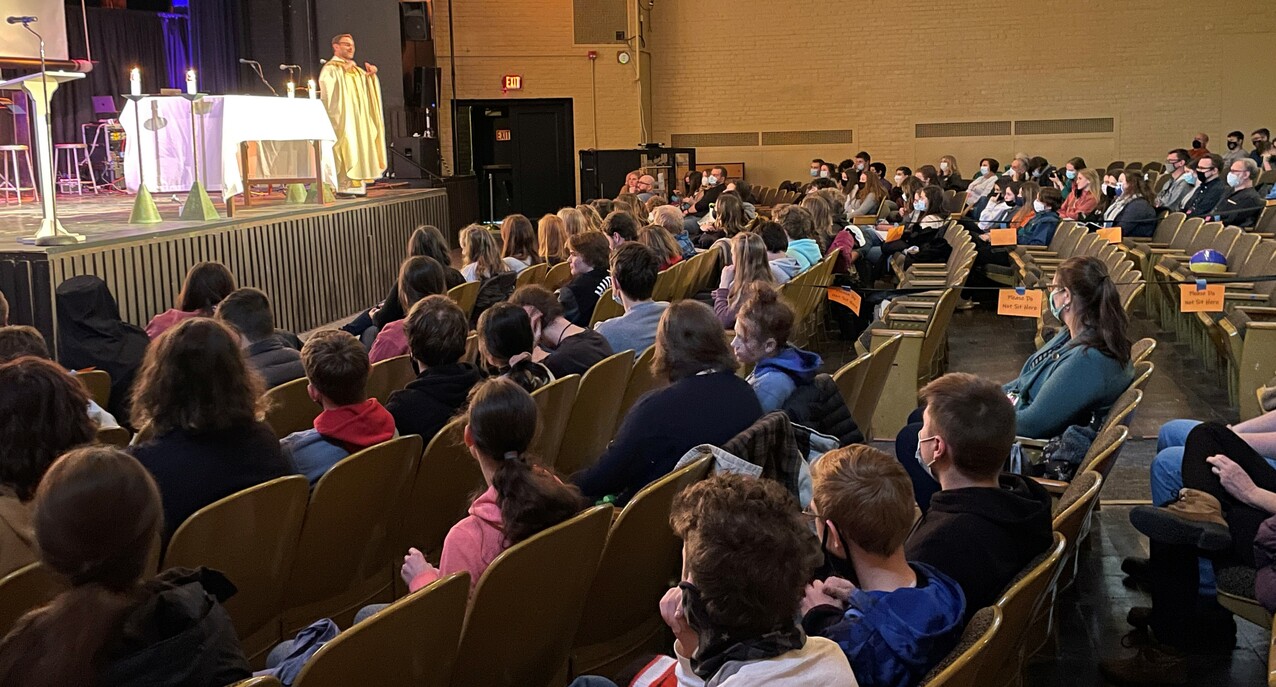 The first CLE 21:6 event on Jan. 8 drew about 350 high school students to John Carroll University for a day focusing on the theme of “Discipleship.” There were speakers, breakout sessions, parish download times, guided prayer, Mass, games and free time, an opportunity for confession and adoration.

Francine Costantini, diocesan director of youth ministry, said the event name was a play on Cleveland’s 216 area code and also was based on Matthew 21:6, “The disciples went and did as Jesus had instructed them.”

She said the students attend school together, participate in sports and other activities. “We need to feed them spiritually, also. They need Jesus,” she added.

As the students and youth ministers arrived, they enjoyed warmup activities, music before the first keynote speaker, Brad Pierron, took the stage.

Pierron, missionary program director for Damascus Catholic Mission Campus in Centerburg, Ohio, discussed the importance of building a firm foundation. He described his high school experience, going from a class of 23 at a small Catholic school in Southern Ohio where he knew everyone and was a standout in athletics and other activities, to being one in a class of 7,000 at The Ohio State University.

“I needed to find my foundation,” he told event attendees. “If you don’t get a foundation, you just wander. A firm foundation will stay with us forever,” he added, explaining the concept of discipleship.

“The art of discipleship is an art of learning to be born,” he said. Mary, as Jesus’ mother, was the first disciple. Discipleship is “a ‘yes’ to Jesus that we live out every day.”

Pierron explained the Jewish education system in Jesus’ time, noting there were three levels akin to elementary, middle school and high school. Only boys attended classes and only the top 10% advanced to the next level. The others returned home and learned their father’s trade. Jesus completed every level and was a rabbi’s rabbi, but he also learned his father’s carpentry trade.

In Scripture, the first call to discipleship was always immediate, Pierron said, noting Jesus invited them to come and follow him. The first disciples were men who learned their father’s trade; they were not among the most educated. “They believed they had nothing to give. But Jesus doesn’t take anything from you, he transforms you, like he did with those disciples. Jesus, the rabbi, found these fishermen and told them if they gave their lives to the Lord that day, he would make them fishers of men, not just fishermen,” Pierron said.

“You will change the world,” he told the teens. “We’re all in the same boat and we all want the same thing. God loves us so much he wants us to partake in his life. Discipleship is what you were made for.”

After lunch, attendees chose two breakout sessions featuring a variety of speakers addressing topics like proof of the Resurrection, why and how we worship, navigating mental health, addressing the sin of racism and answering with cultural humility, essential questions regarding gender identity and the Church and the basics of prayer.

There was parish download time and an opportunity for prayer before Mass, which was celebrated by Father Damian Ference, vicar for evangelization. Concelebrants were Father Ryan Cubera, pastor of St. Mary of the Falls Parish in Olmsted Falls, and Father Chris Zerucha, pastor of St. Bernard and St. Mary parishes in Akron. Father Ference said Father Cubera was a member of the youth group at his first parish assignment, St. Mary in Hudson.

After the Gospel, which told the story of the baptism of Jesus, Father Ference questioned why Jesus was baptized if he had no sin. Baptism cleanses us of sin, he explained, and we receive a new identity as Christians. “You figure out who you are and whose you are.”

After Jesus was baptized, Scripture tells us the heavens opened and a dove (the Holy Spirit) descended and a voice (God the Father) spoke saying, “This is my beloved Son with whom I am well pleased.” This powerful moment showed the Holy Trinity in action – the Father, Son and Holy Spirit – he explained.

Father Ference said the foundation of our life is that we are sons and daughters of God and he is pleased with us. “We find our identity in him. God the Father delights in you. It doesn’t matter what you’ve done, he takes delight in you.”

We can set up an identity by what we wear, how we live or on social media. But in the end, none of that matters, he said. We can cure our shortcomings though our relationship with God, in whom we find our real identity.

Jesus lives in us, Father Ference said, and at the end of Mass, we are sent on a mission to share the good news with the world, “bringing Jesus to pockets of the world where only we can go.”

He thanked his parents for their vocation of marriage, which resulted in his birth, which led to another vocation: his priesthood.

After dinner, attendees heard another presentation on discipleship from Deacon Joe Menkhaus, who also presided at adoration.

Costantini said CLE 21:6 will be an annual event and planning will begin soon for the 2023 program.