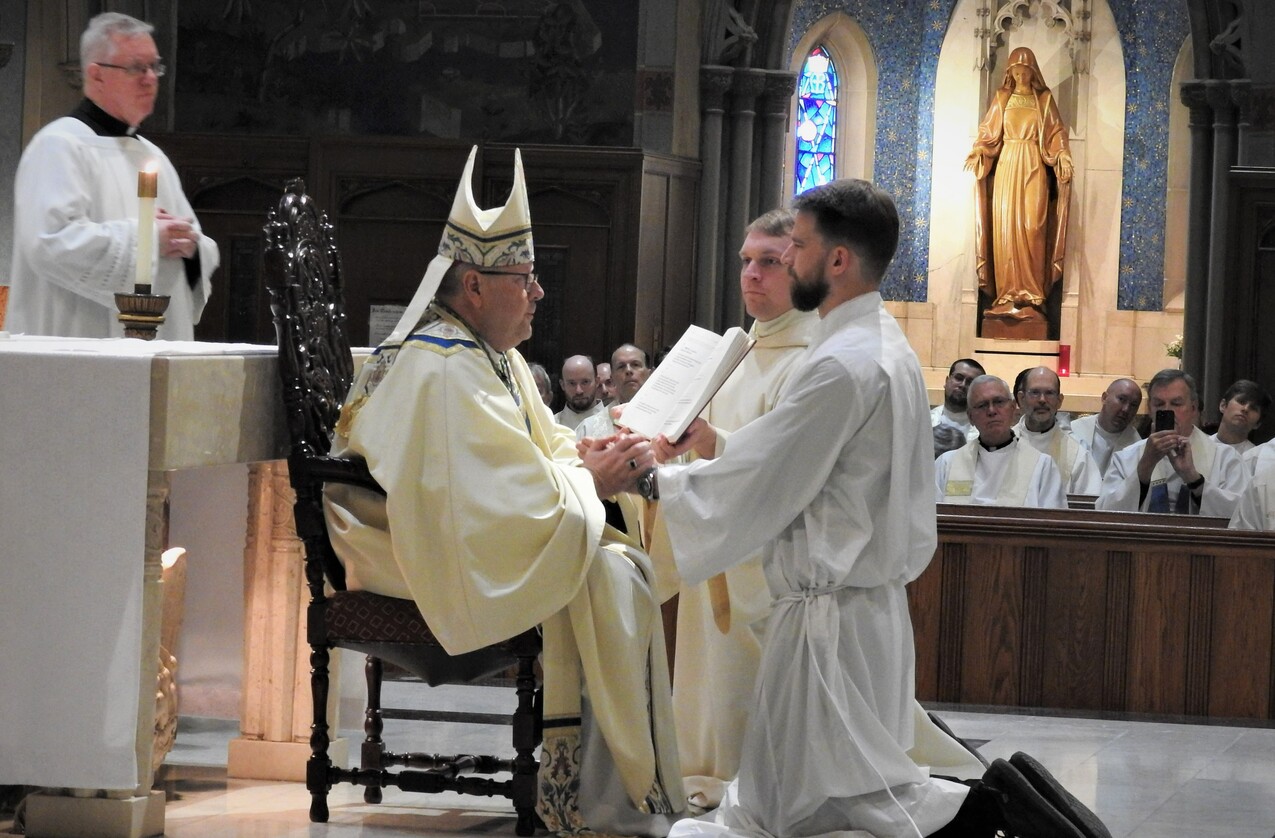 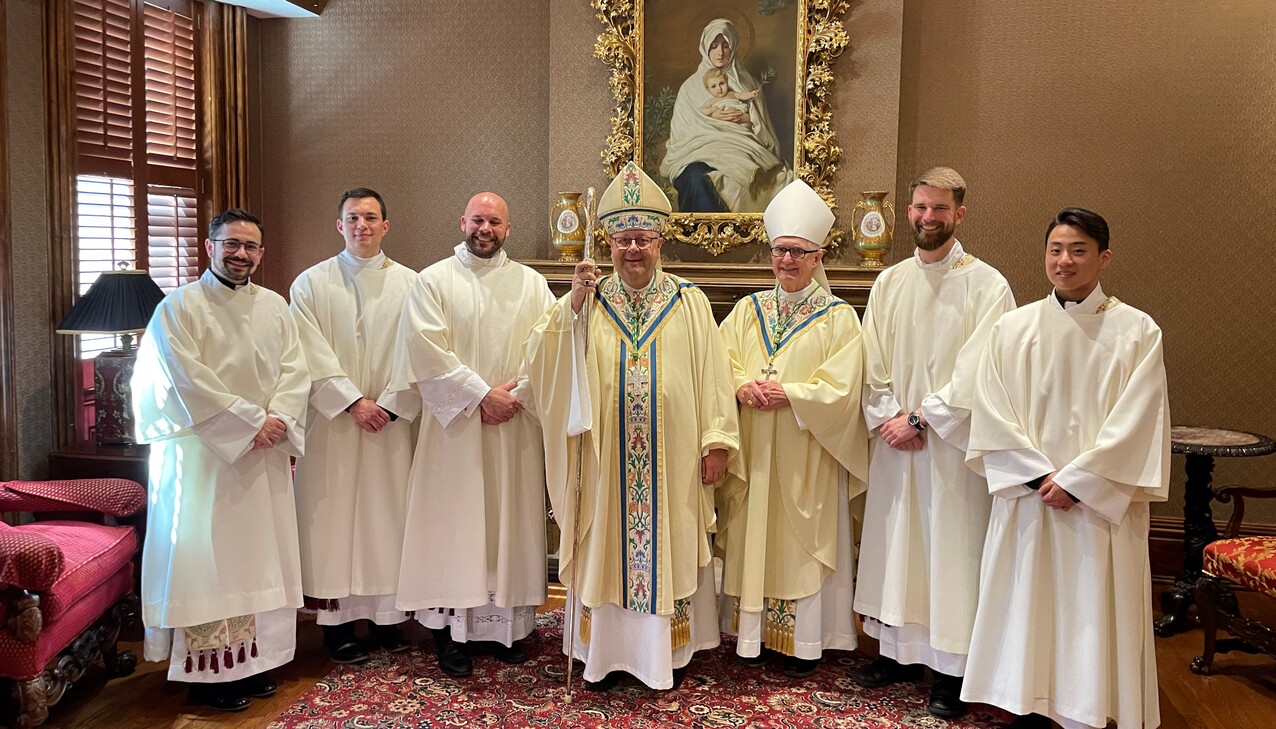 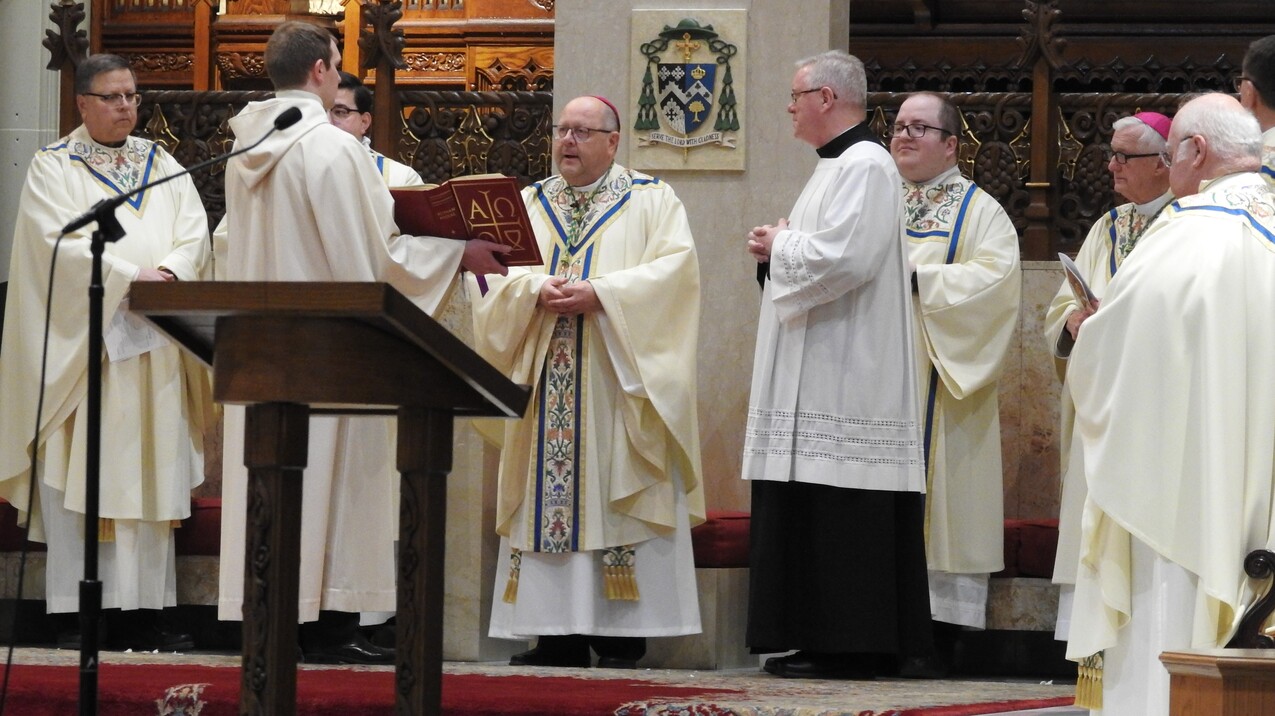 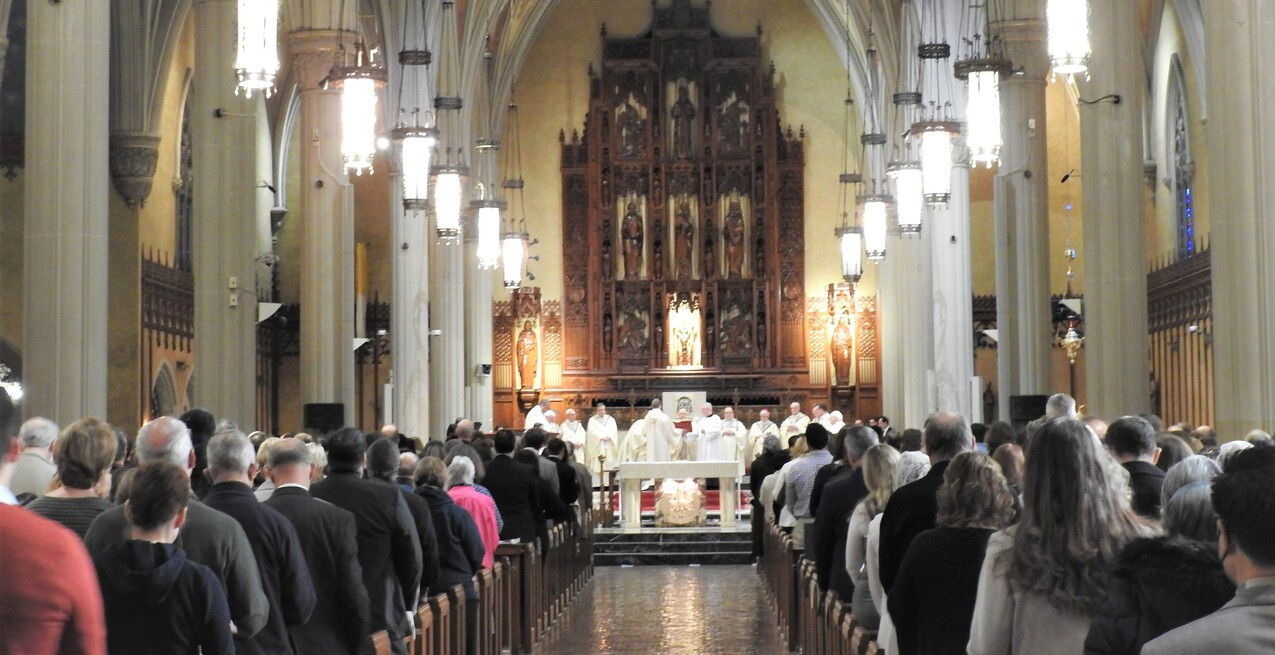 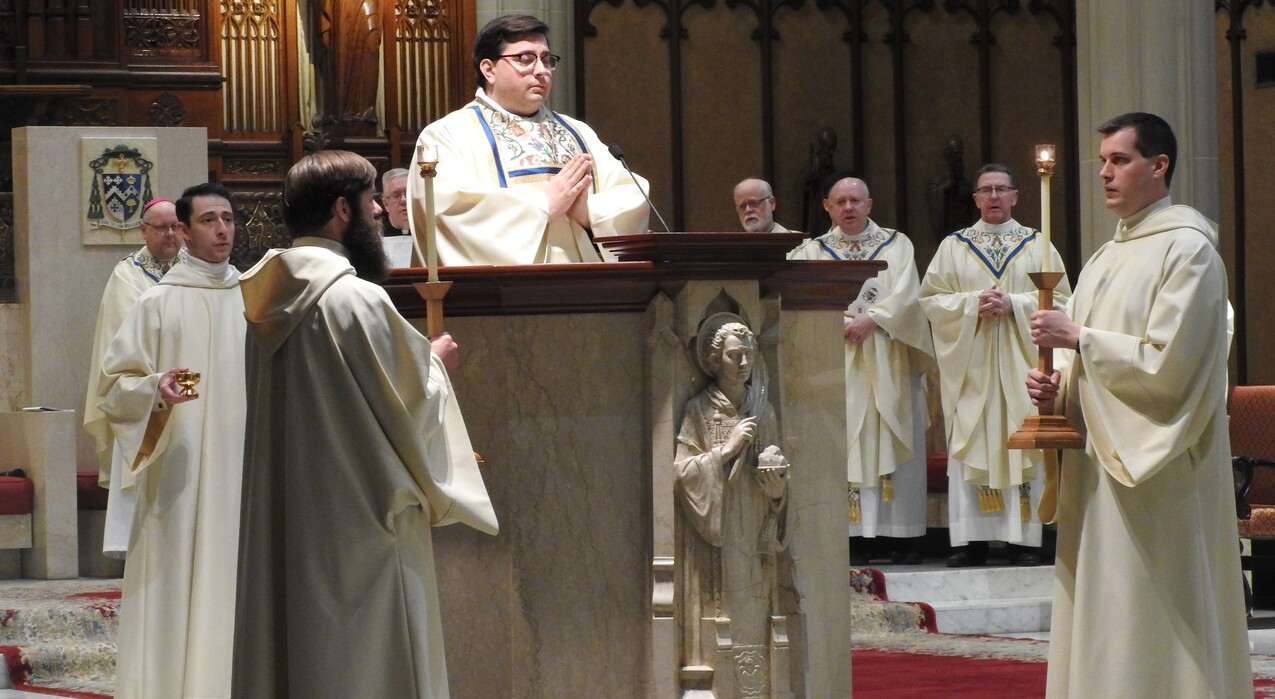 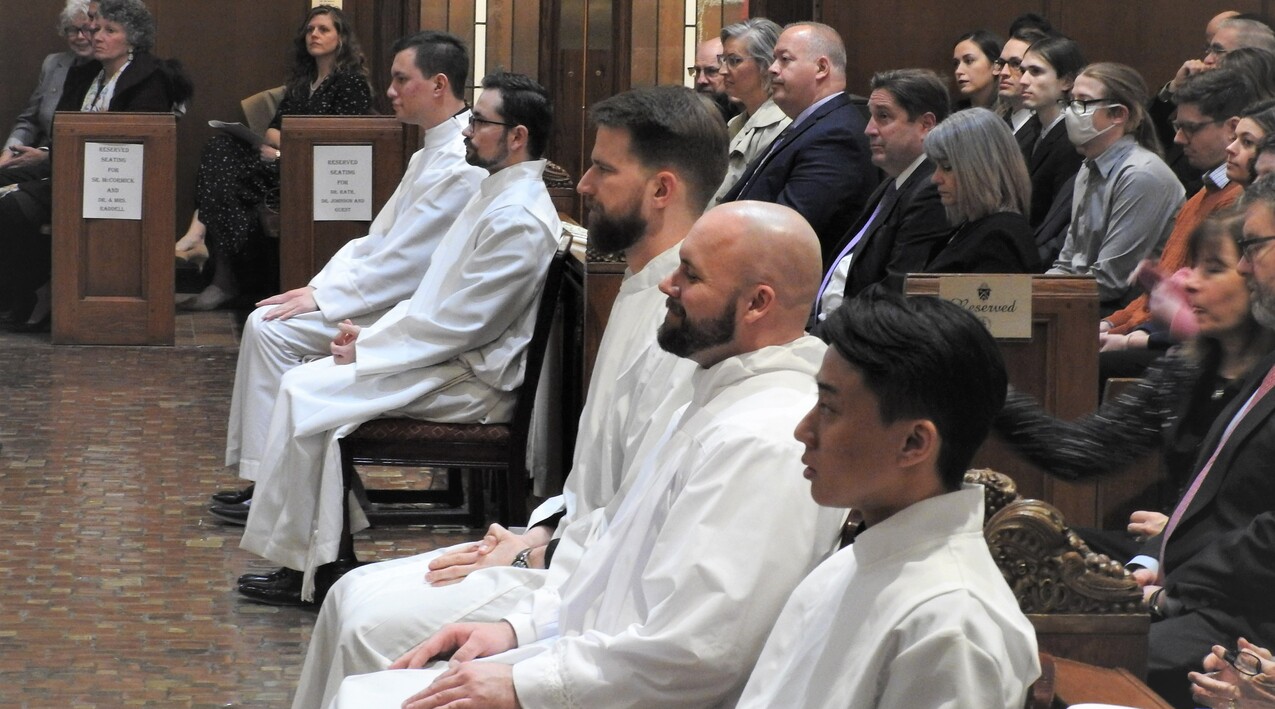 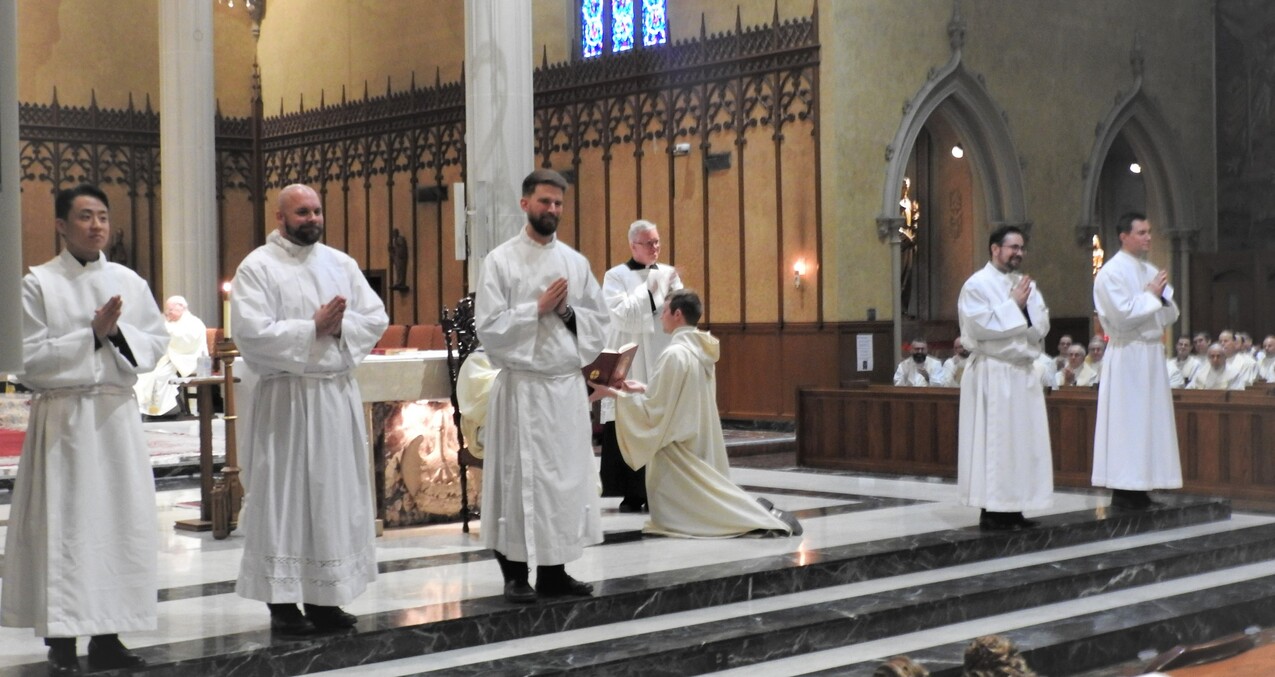 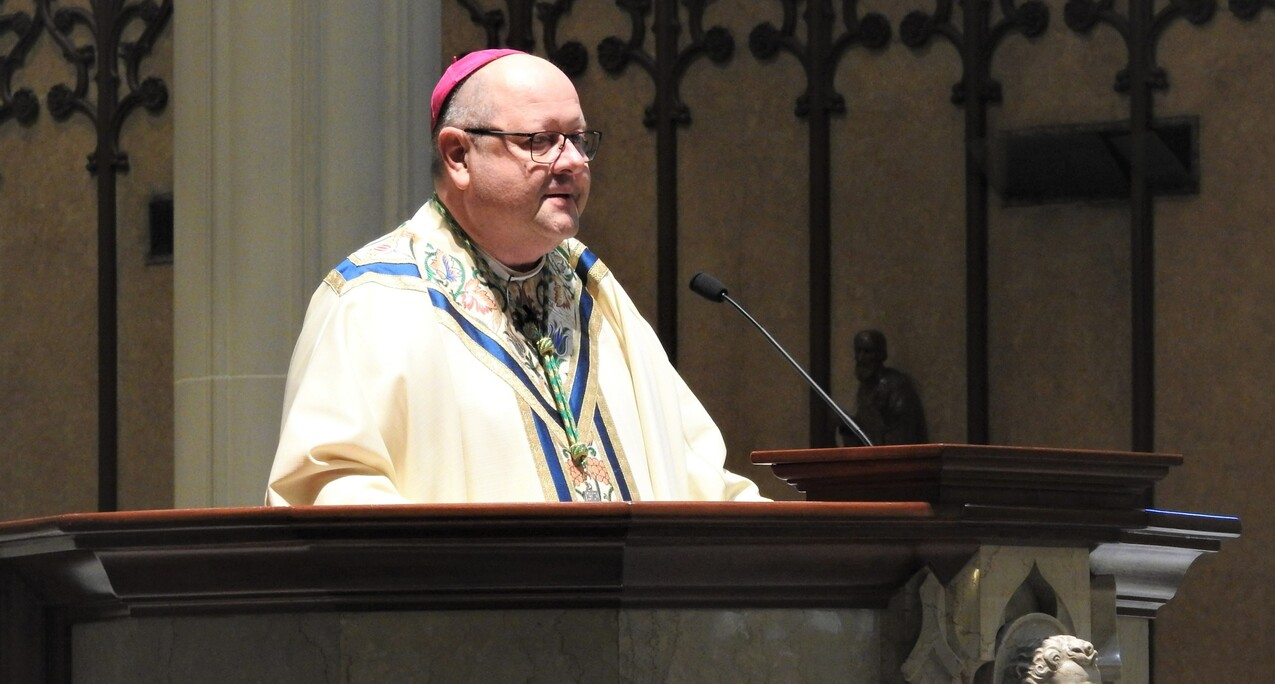 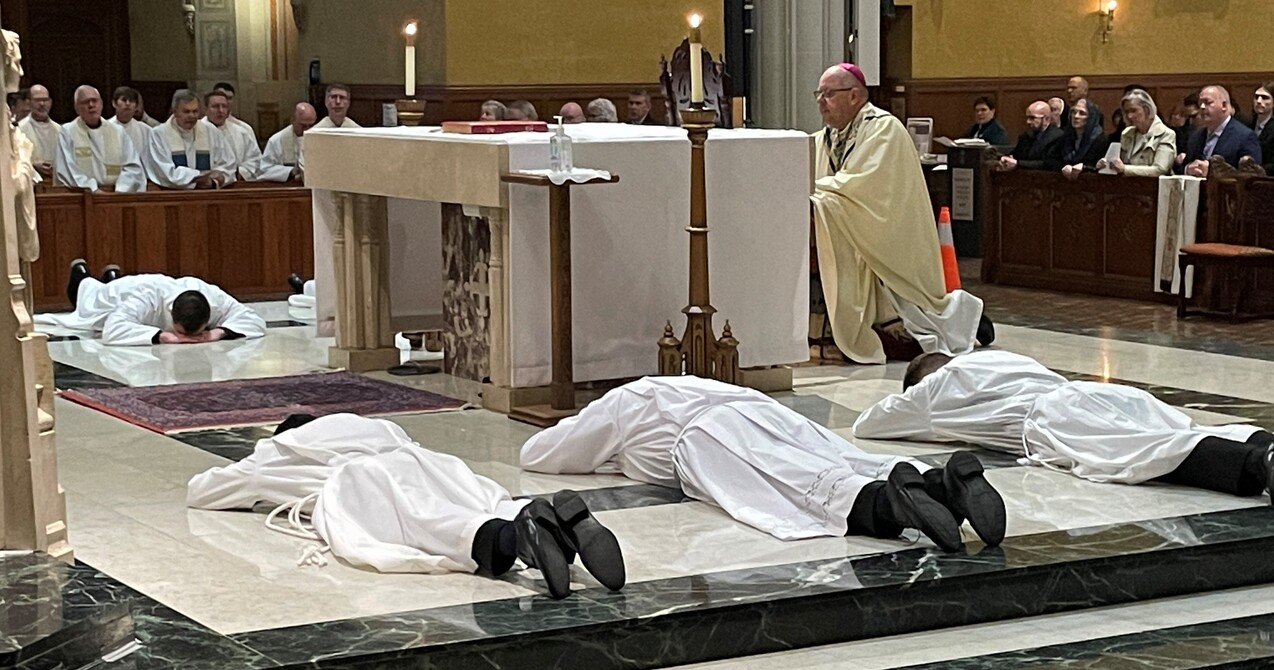 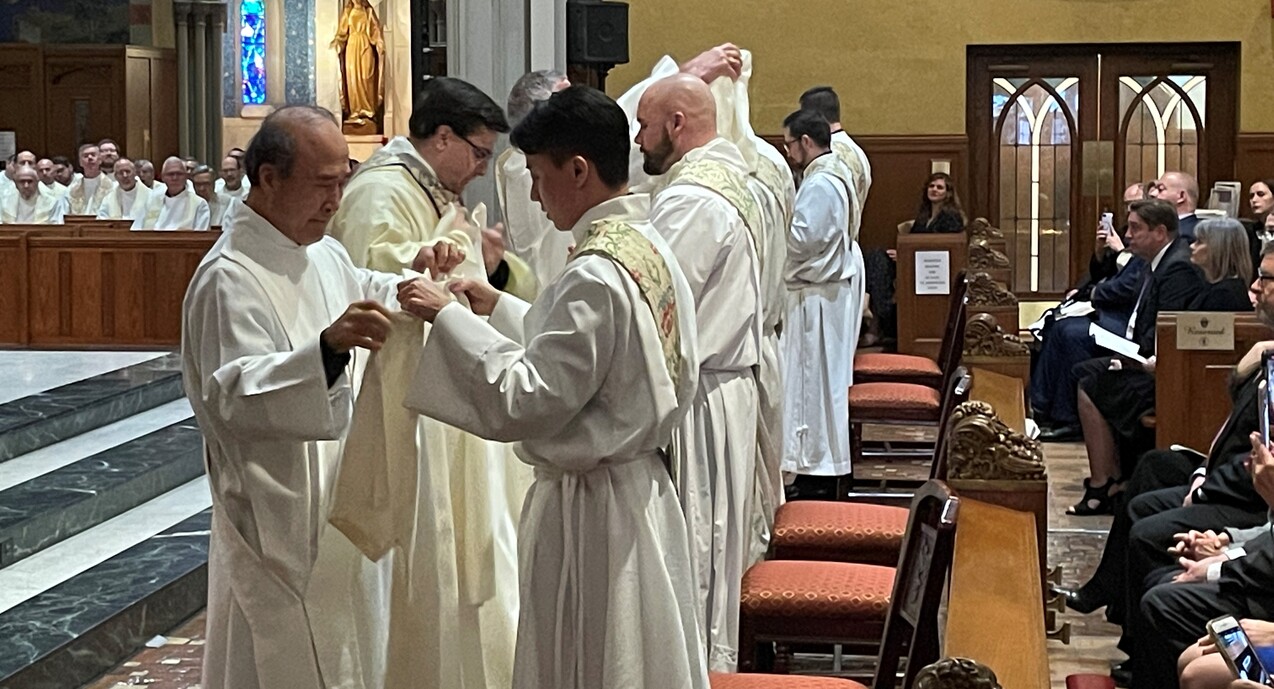 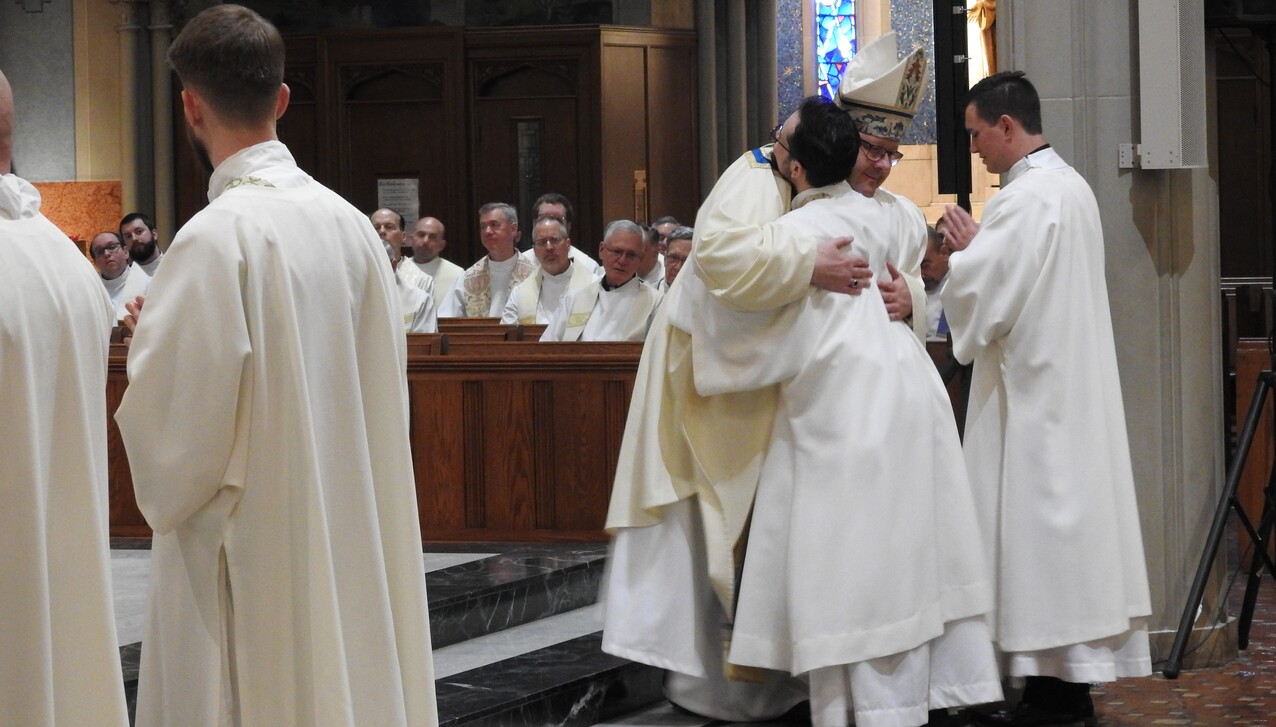 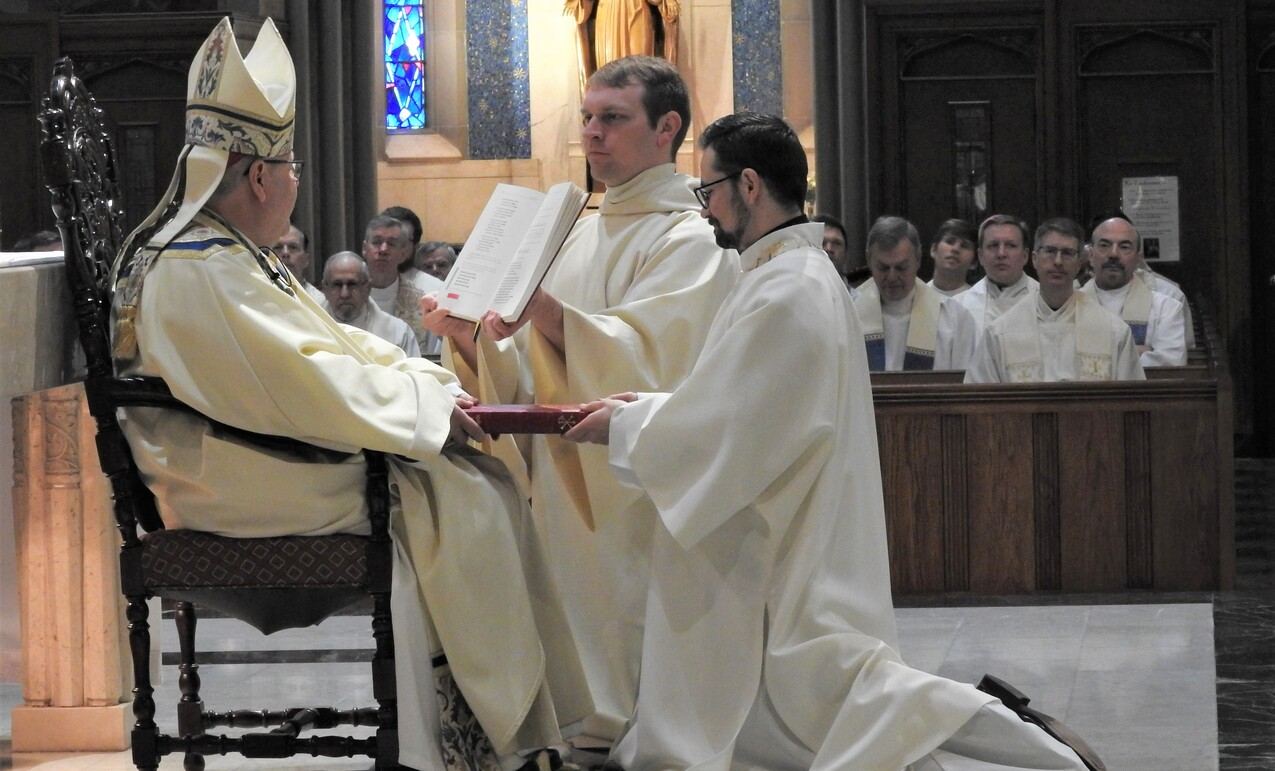 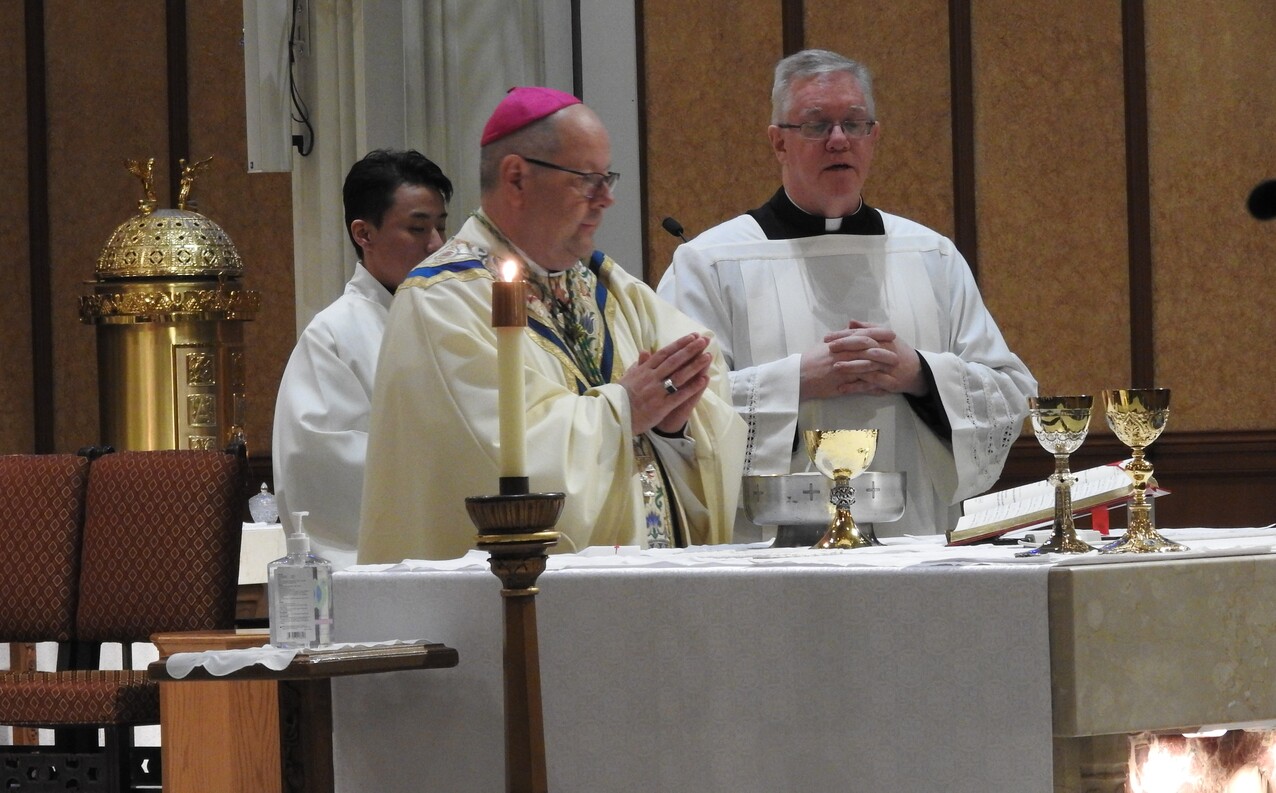 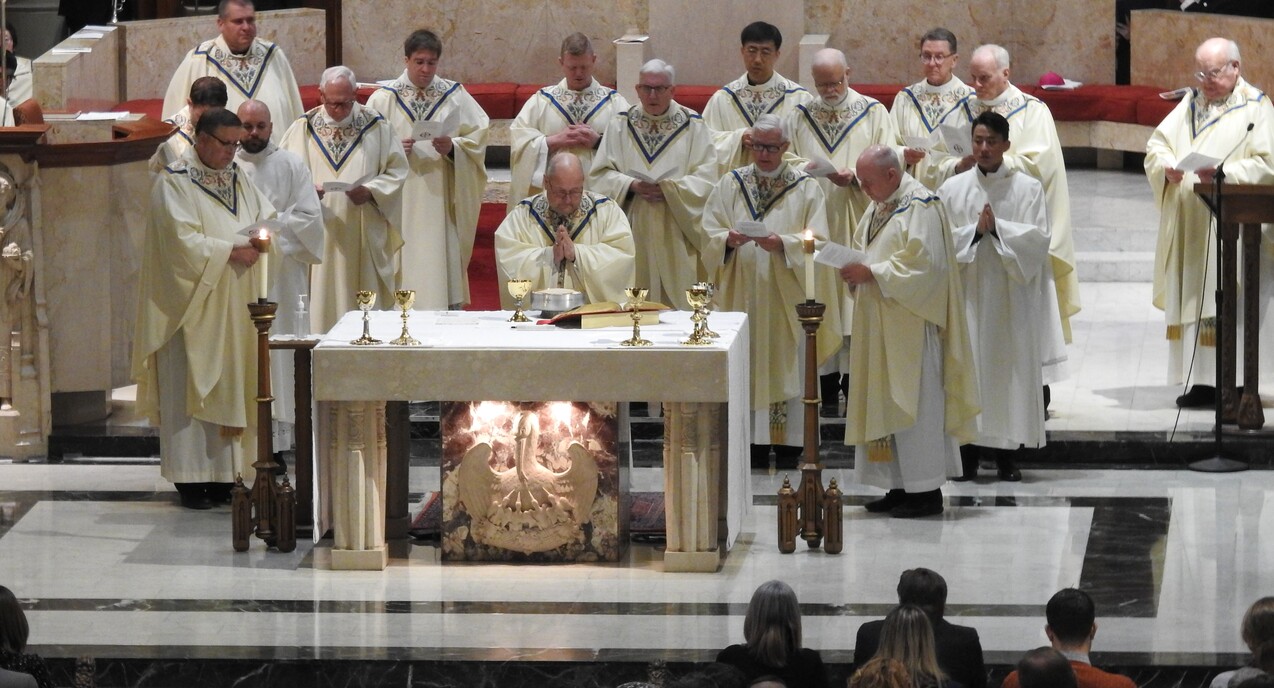 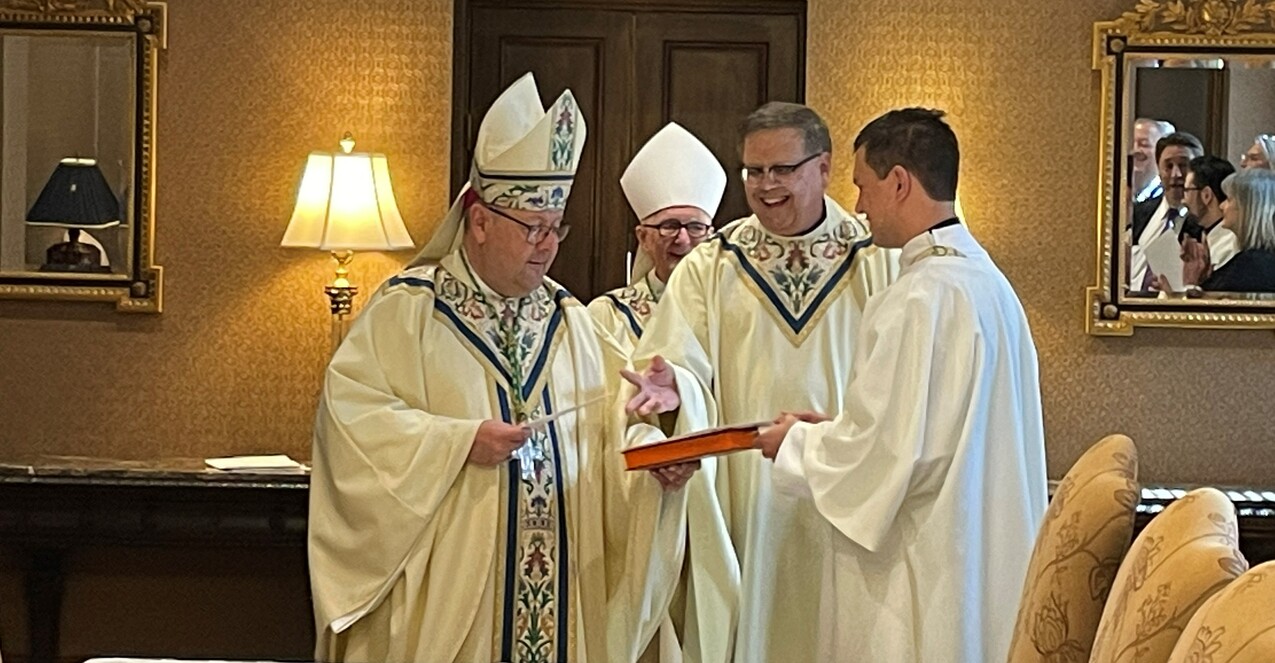 Five men entered the Cathedral of St. John the Evangelist as seminarians the morning of April 2 and left as ordained deacons, another step in their journey to the priesthood. (See photo gallery above.)

For newly ordained Deacons David Chojnacki, Dominic Gideon, Jeffrey Liptak, Christopher Stein and Fabian Duckyan Han, the next year will be filled with additional discernment, academic work and service to their assigned parishes, where they will minister as deacons. Bishop Edward Malesic reminded them that as deacons, they will preside over public prayer, administer baptism, assist at marriages, bring viaticum to the dying and conduct funeral rites. In addition, he told them they “will exhort believers and unbelievers alike and instruct them in holy doctrine.”

The five men are studying at Saint Mary Seminary and Graduate School of Theology in Wickliffe. Four – Deacons Chojnacki, Gideon, Liptak and Stein – were ordained for service to the Diocese of Cleveland, while the fifth – Deacon Han – is from the Archdiocese of Daegu, South Korea, which has a longtime arrangement with the Cleveland Diocese for priestly formation. He will serve in the diocese for several years before returning to Daegu. Bishop Malesic acknowledged Deacon Han’s family watching the ordination by livestream from their home in South Korea.

“Fabian, you remind us that our Church is not confined to the borders of our diocese, but that we are members of a much larger family of faith who belong to a universal Church,” he added.

During the ordination, Bishop Malesic laid his hands on the heads of each man. “It is the effective sign of the Holy Spirit descending on you to become ordained ministers of the Church. The laying on of hands is also the shove the Church uses to send you out into the world as one of God’s ordained workers,” the bishop said.

But, the bishop cautioned, “Do not fall into the temptation to see your ordination to the diaconate as a simple stepping stone to your ultimate vocation, or a hoop that must be jumped through in order to reach the goal of priesthood. Yes, we are ordaining you to the transitional diaconate and not the permanent diaconate. Yes, you must be ordained as deacons before I can ordain you as priests. In fact, to be a good priest – or a good bishop – you must first and always be a good deacon.”

He reminded them that in 2008 while speaking to the clergy of Rome, Pope Benedict XVI said that the “Lord himself became our minister, our deacon,” recalling the Last Supper when Jesus washed the feet of the apostles. The pope said the Lord was showing the way to serve on another by the way he served us.

“Gentlemen, you are being configured today to Christ the servant. Do not be afraid to wash feet, which involves an act of humility. Be humble enough to do what is being asked of you,” he said.

Bishop Malesic also noted that much like the shortage of workers in many businesses, the Church has a shortage of ordained workers. “’The harvest is plenty,’ the Lord said, ‘but the laborers are few.’ We want to thank you for answering the ‘help wanted’ sign of our Lord and answering his call. But remember, it was he who chose you way before you chose him.”

The bishop reminded the men, “This day is part of God’s plan for you.” He said they should let the Lord be their strength and to realize that they are not being asked to be the savior of the world. Instead, “We are asking you to point us to the savior.” He also said they should show the face of Christ to us. “And here’s a hint. It helps if you smile,” he quipped.

“Even though you are fragile earthen vessels, trust in the power of God who will work great things through you. God will use you, ordinary men, just as he uses simple bread and common wine, to show forth his glory,” Bishop Malesic said.

During the ordination, the five men made a promise of celibacy, but that is not meant to free them from obligations to others. It is meant to free them to fulfill their obligations to others, the bishop said, explaining that “God’s people, the bride of Christ, will become your primary concern. The needs of the poor will become your responsibility, the service to the Church at the altar will become your charge and preaching the word of God, whether oat Mass, in the classroom or in a one-on-one discussion is as important for you to fulfill the need as a parent has to feed the family.”

The bishop also cautioned the new deacons that they are not above the Church, but rather are being sent more deeply into it. He said the Lord would send them to some difficult places where they will bring peace and healing, announce the kingdom of God to those who are hopeless and bring Jesus to those who seek his salvation.

“Please, serve the people of God with love and joy,” he said, encouraging them to remember his episcopal motto: “Serve the Lord with gladness.”

The newly ordained their home parishes, parents and diaconate assignments are:

Three other men in their seminary class – Brook Benedict, John Rovnak and Frederick Schleuter of the Diocese of Youngstown ­– will be ordained to the diaconate on June 4 by Youngstown Bishop David Bonnar in St. Columbra Cathedral in Youngstown for service to their diocese. The Youngstown Diocese sends some of its seminarians to Saint Mary Seminary for priestly formation.