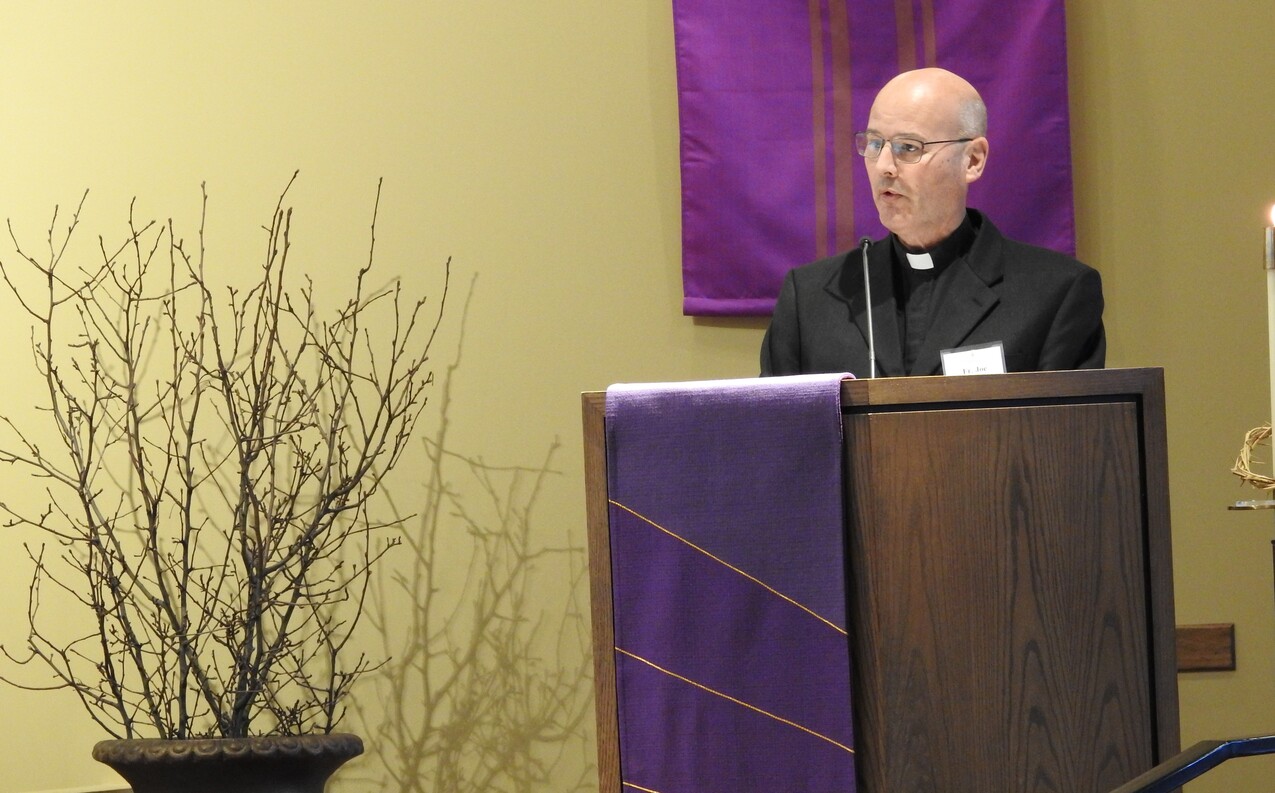 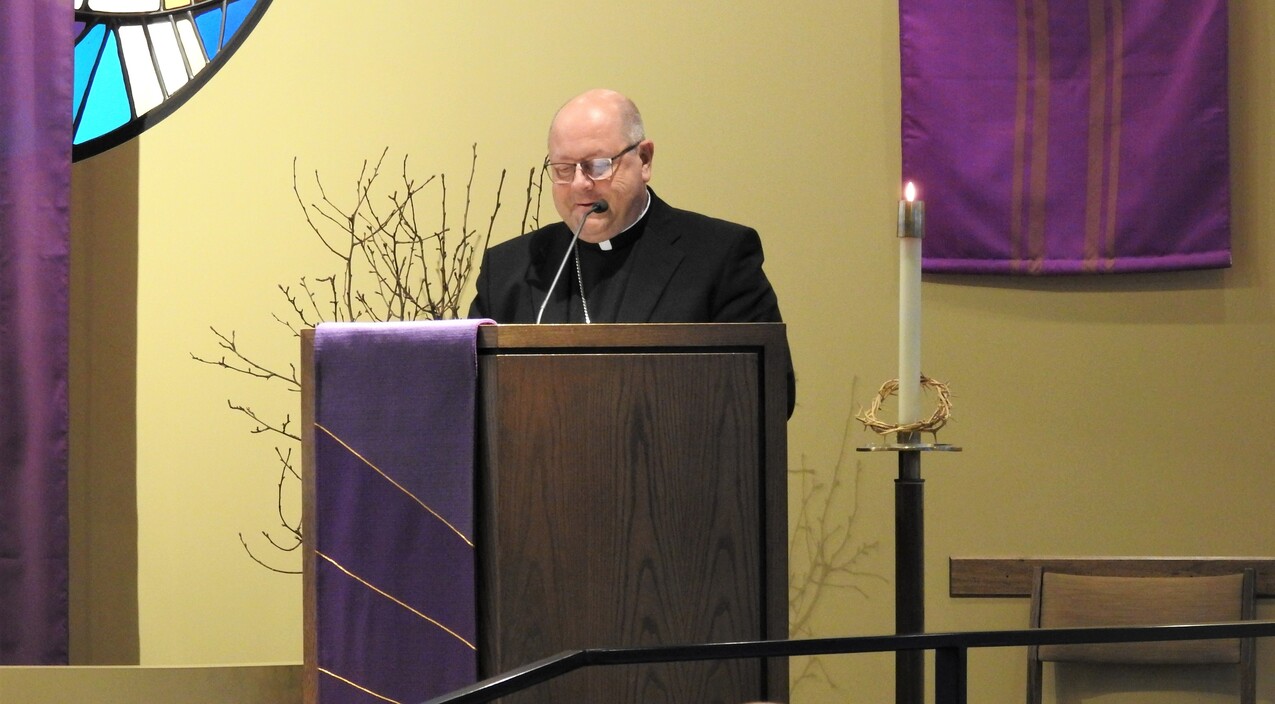 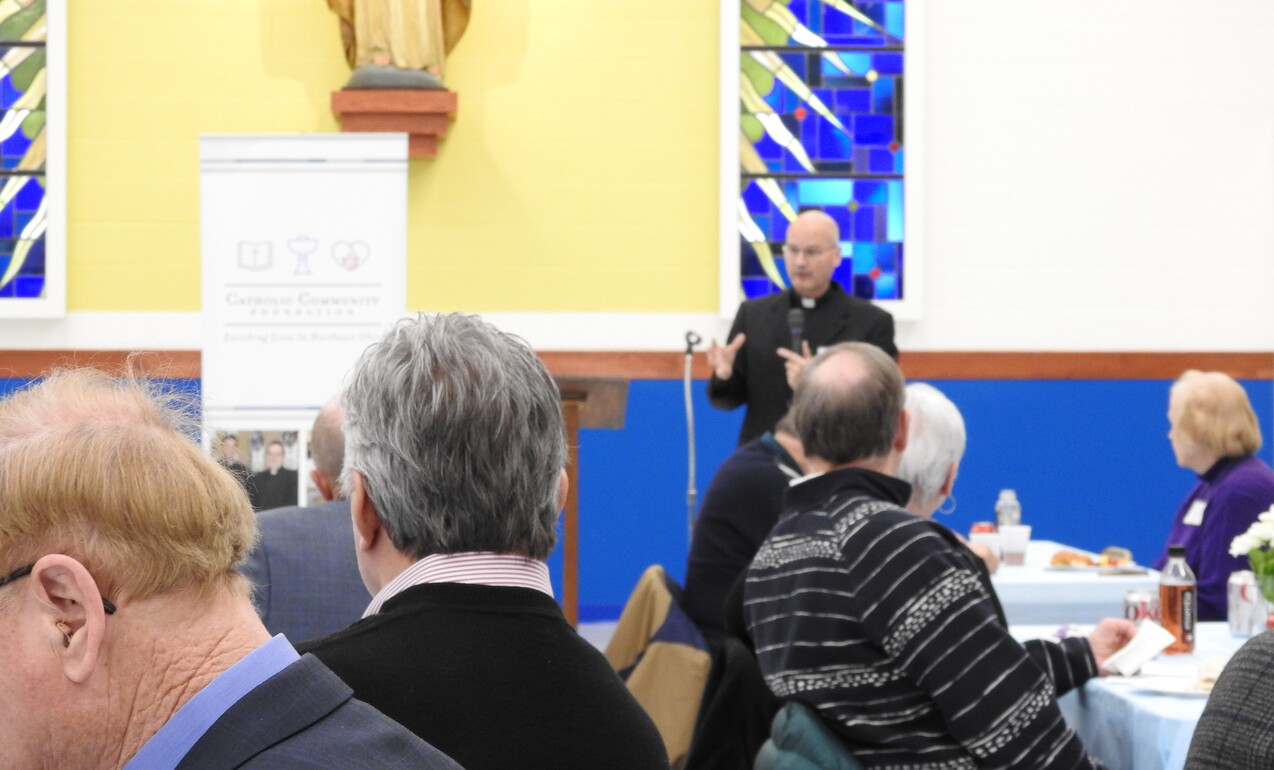 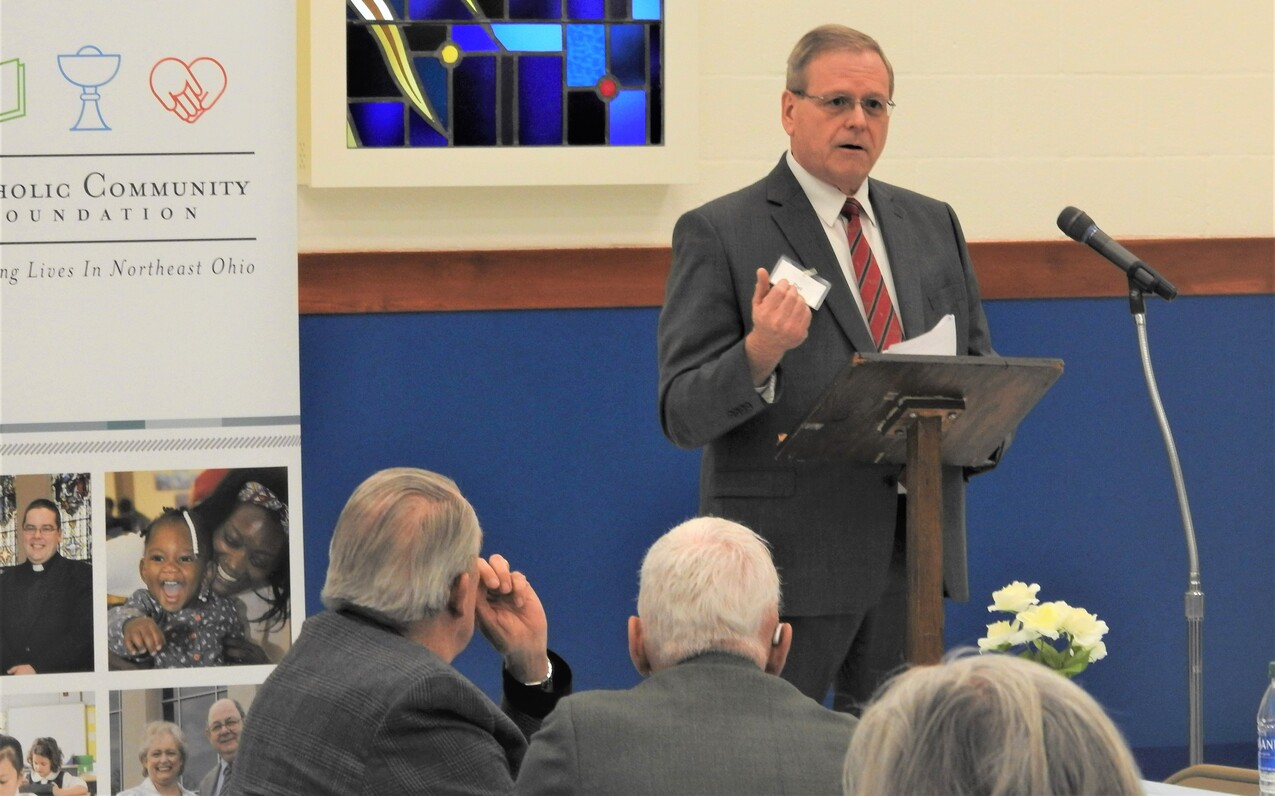 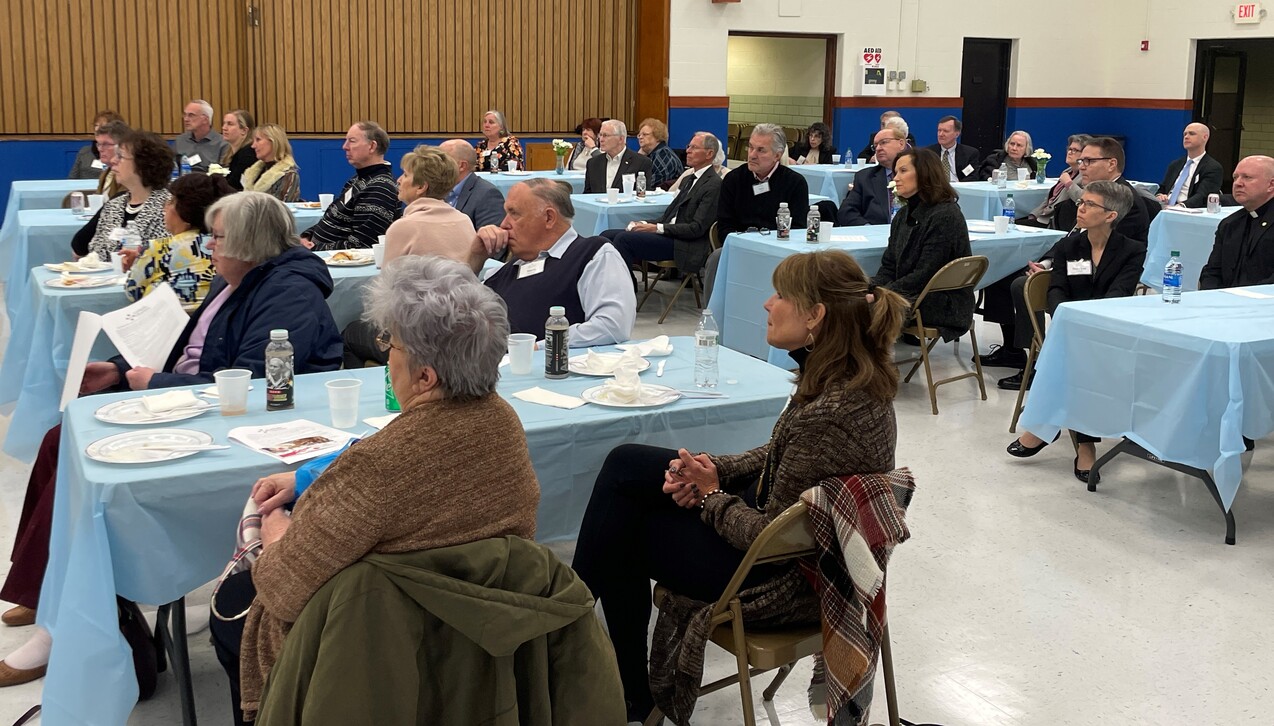 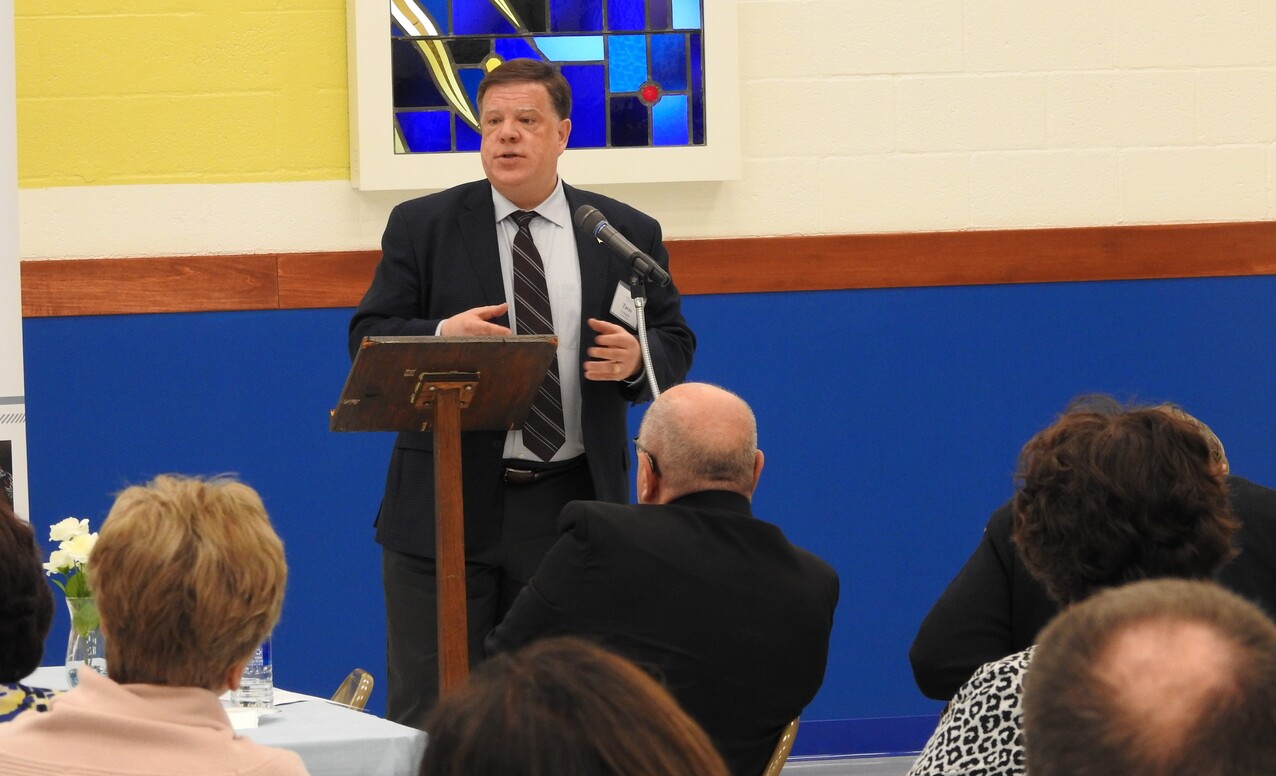 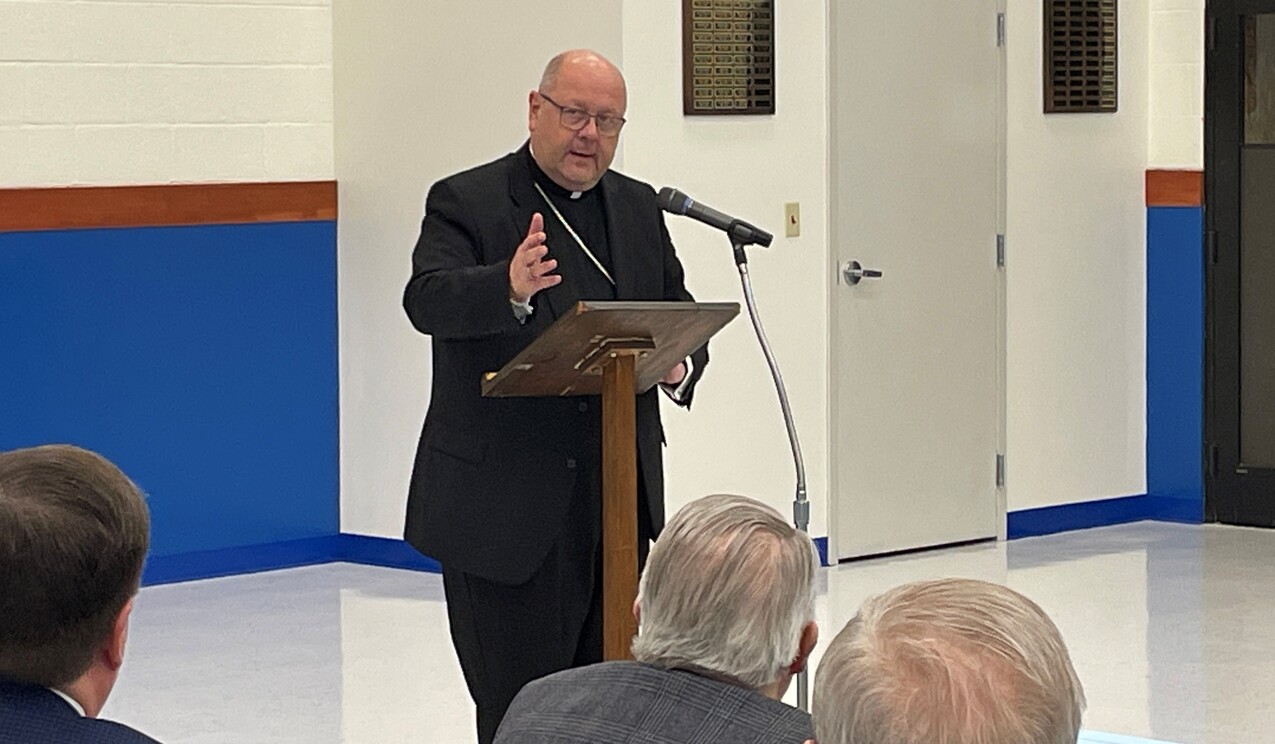 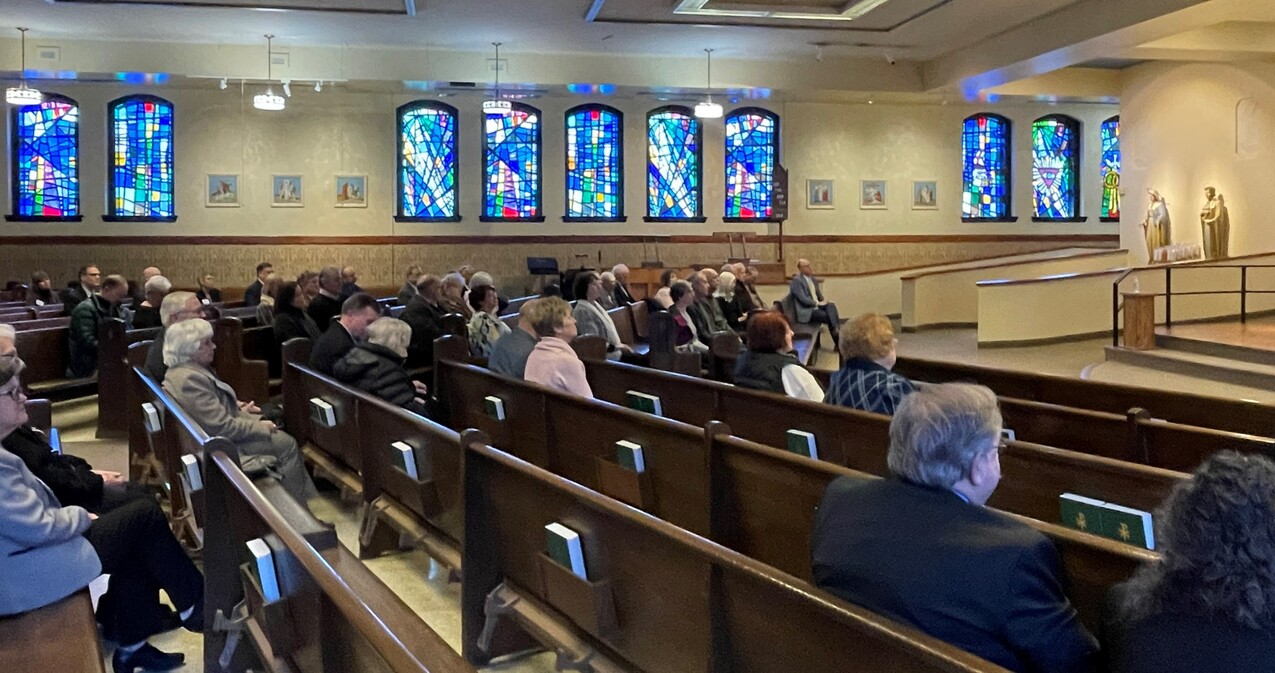 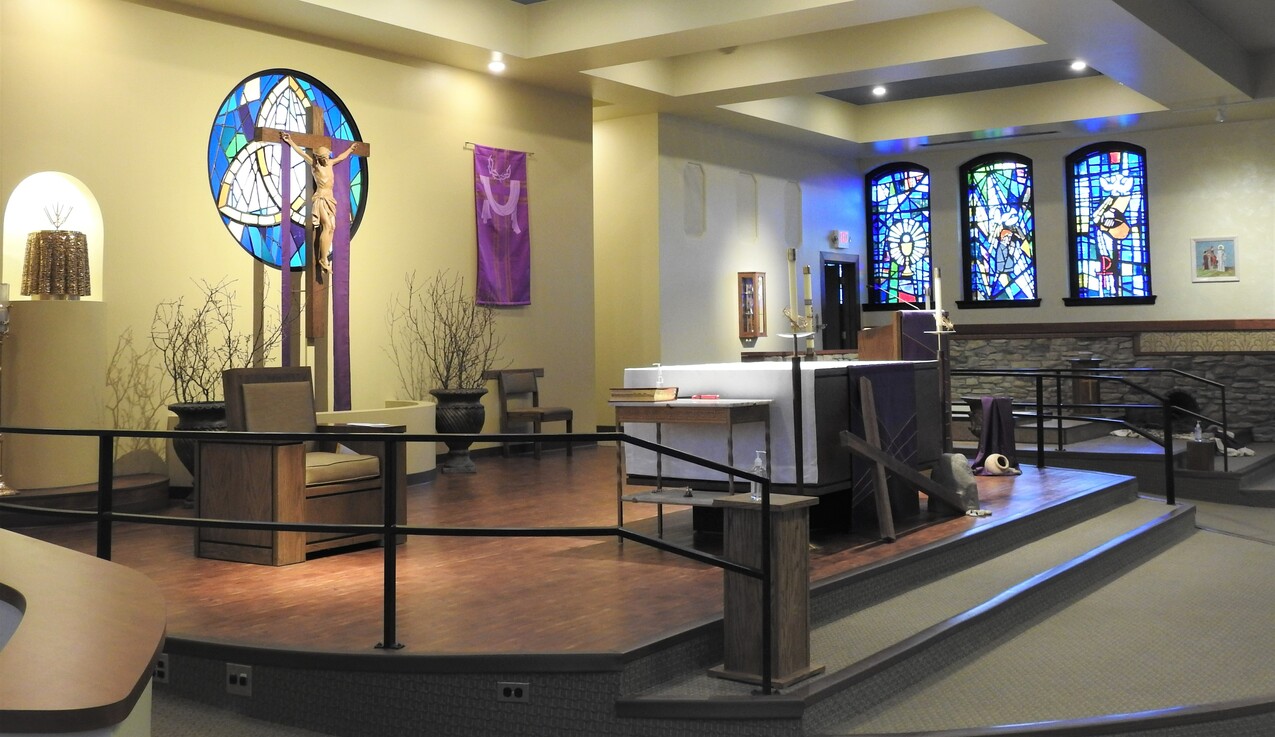 Lent is a time to pray, reflect on our life and ask whether our walk through life is matching up with the walk that Christ called us to make with him, said Bishop Edward Malesic.

The bishop spoke to the St. John the Evangelist Leadership Guild on April 4 at Blessed Trinity Parish in Akron’s North Hill neighborhood. In addition to the bishop sharing his Lenten reflection, guild members heard about the partnership Blessed Trinity Parish has with Catholic Charities, Diocese of Cleveland, an update on Catholic Charities’ Migration and Refugee Services efforts and a recap of the Ukrainian humanitarian crisis. (See the photo gallery above.)

Father Warner, Blessed Trinity’s founding pastor, said he empowered parishioners to renovate the sanctuary to make it more functional. “God blessed our efforts,” he added. Also, in the hall are framed stained-glass windows and statues taken from the three parishes and repurposed to reflect their unity as the new parish, while honoring the history of each.

The parish hall hosted twice-monthly lunch programs with entertainment for senior citizens prior to the pandemic. They hope to resume the lunches, which normally have a waiting list.

Father Warner said North Hill once was a very ethnic neighborhood. As the original residents moved out, many homes became vacant. However, due to a recent influx of refugees taking advantage of the affordability in the Akron neighborhood, vacant houses are no longer a problem, he said. Currently, 8,000-12,000 refugees who speak about 20 languages live in the North Hill neighborhood.

Patrick Gareau, president and CEO of Catholic Charities, Diocese of Cleveland, gave a brief overview of the agency’s MRS work.

Despite the war in Ukraine, Gareau said there has not been an influx of Ukrainian refugees in the United States. Afghanis are the largest group of refugees to settle in Greater Cleveland in recent months after the United States left Afghanistan last summer.

He said the process for refugees to resettle somewhere is lengthy, sometimes taking years. Refugees can receive employment training, English as a Second Language classes and other assistance for up to five years, but Gareau said most of the refugees Catholic Charities assists become self-sufficient in about six months.

He explained that because of the situation in Afghanistan, those fleeing the country were granted a special status as “parolees.” More than 200 Afghani parolees arrived in Greater Cleveland and he said another 600 could be coming.

Gareau also talked about the meaning of refugee. It typically means a person who was forced to leave their home country to escape war, persecution or a natural disaster. Under U.S. law, refugee is a person who is unable or unwilling to return to his or her home country because of a “well-founded fear of persecution” due to race, membership in a particular social group, public opinion, religion or national origin. The State Department makes this determination before the person arrives in the U.S.

He also provided information clarifying how a Ukrainian could become an immigrant in the U.S. if they have a family member here, if a Ukrainian relative can get a visitor visa to come to the U.S., the options for Ukrainians already in the country and how Catholic Charities can help.

Taras Smagala Jr., who has Ukrainian heritage, talked about the war, the humanitarian response and Ukrainian Catholic University.

He is a member of the St. John the Evangelist Guild and serves on the university’s board of directors. Szmagala is senior vice president – public and community affairs and corporate communications for Eaton. An attorney, he once practiced law in Squire Sanders & Dempsey’s Kviv, Ukraine office. He has leadership roles in many community organizations and serves on several boards, including Saint Ignatius High School.

He said the European Union is the real concern for Russia’s Vladimir Putin, not NATO.

Regarding religion, Szmagala said there are several Christian churches in the country and the Catholics, who are a minority, are helping to drive social change by illustrating a commitment to social justice. He said Ukrainian Catholic University, which has about 2,000 students, was founded in 1928. Based in Lviv, he said the campus – so far – has not been damaged during the fighting.

“The university is turning into a social service operation,” he said, noting the community is working to aid the refugees. Catholic Relief Services and Caritas International, two Catholic agencies, also have boots on the ground and are providing assistance.

In his Lenten reflection, Bishop Malesic asked for prayers for Ukraine and the terror the people are enduring.

On a more personal level, he reflected on how Lent is a tie to take stock of our spiritual lives. “Fasting” from sin will help provide room for us to increase in the virtues of mercy and kindness, he said, pointing out that Pope Francis calls mercy “the beating heart of the Gospel.”

“Let’s focus our Lenten journey this year by opening our hearts to the mercy of God and then reflect it back onto others,” he said, which can open us up even more to God’s divine grace and infinite mercy.

Kindness is another virtue that we would be wise to cultivate during Lent, the bishop said. One way to do that is to be cautious about how we speak to and of others.

“We all know the terror of the untamed tongue. Scriptures remind us that from our speech, the listener truly knows what is in our heart. Be careful – what we say can be a cause for holiness or for harm. IF we want our speech to be pure, then we must have pure hearts. Again, there comes that difficult concept of Lent: change,” the bishop said.

“Mercy and kindness are two virtues that are the guardrails of our life throughout Lent and always,” he added.

The bishop reminded the group that he shares a daily reflection during Lent and a Sunday Scripture reflection throughout the year. “Take a look and see if you find it helpful,” he added.

He also thanked the guild members for their attendance at the event and for their generosity that helps to ensure the mission of Jesus through the efforts of the local Church.

“You are the body of Christ and the light you bring shines brightly for all to see. Let us walk forward to Easter together.”