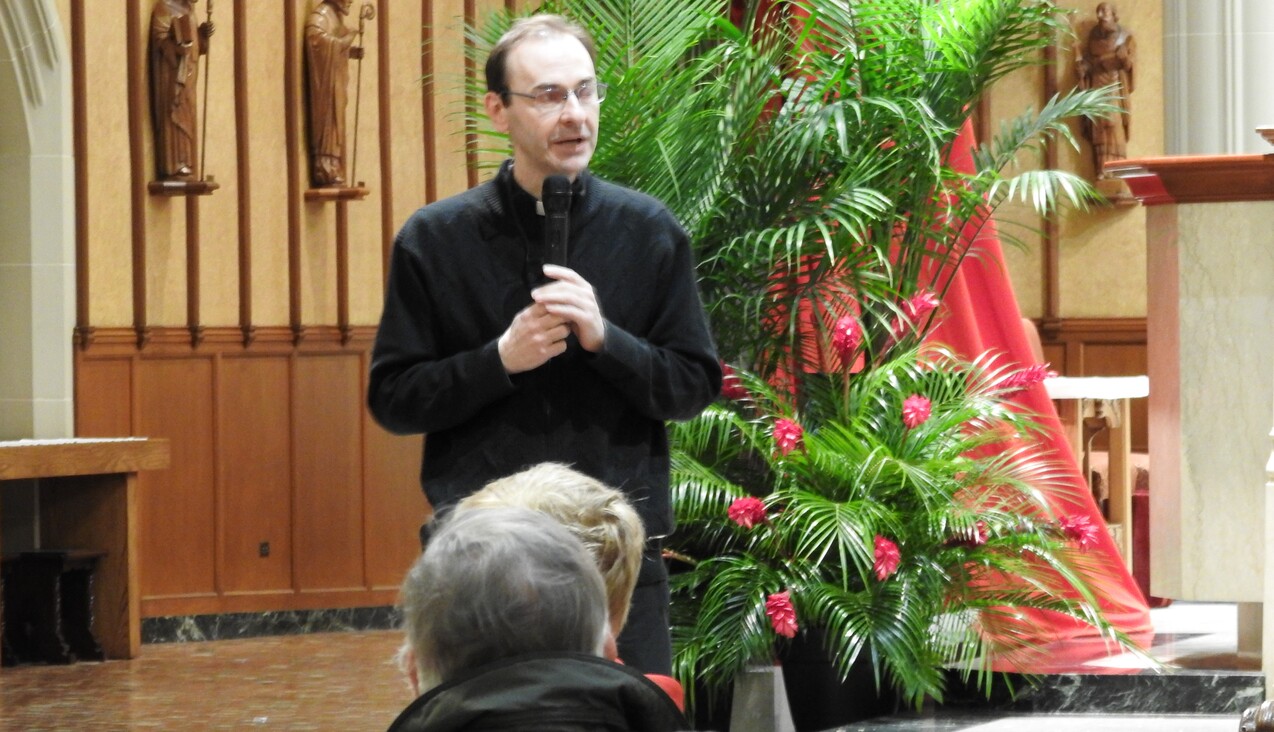 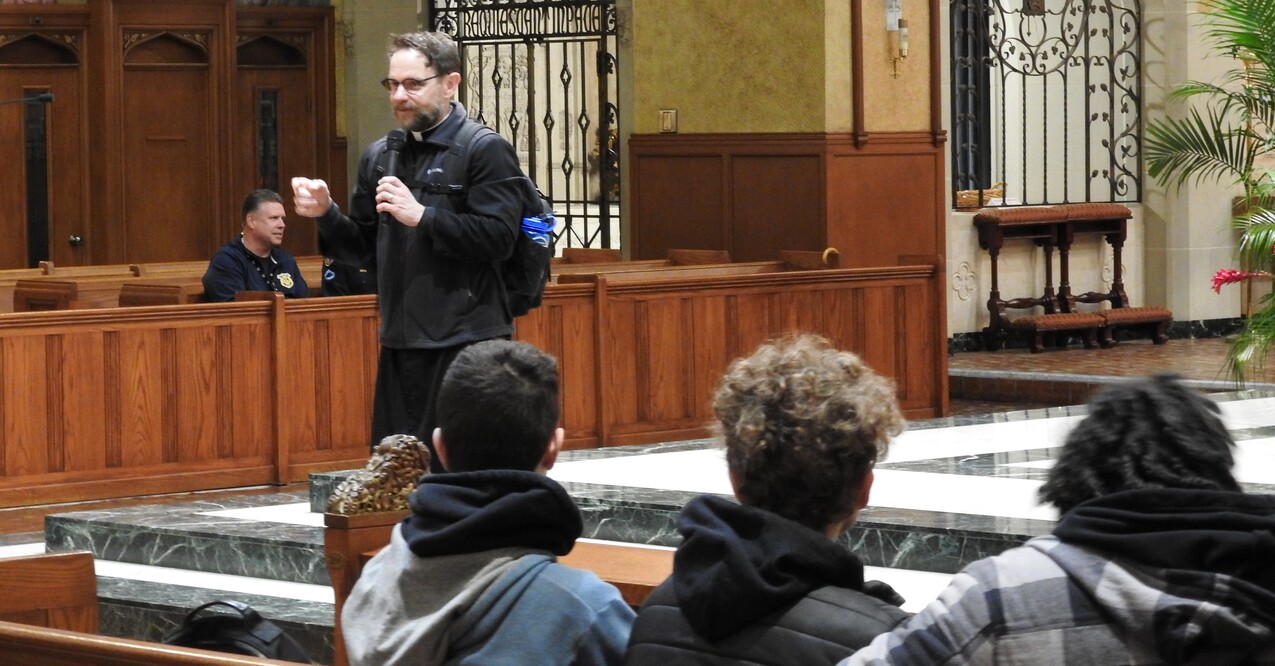 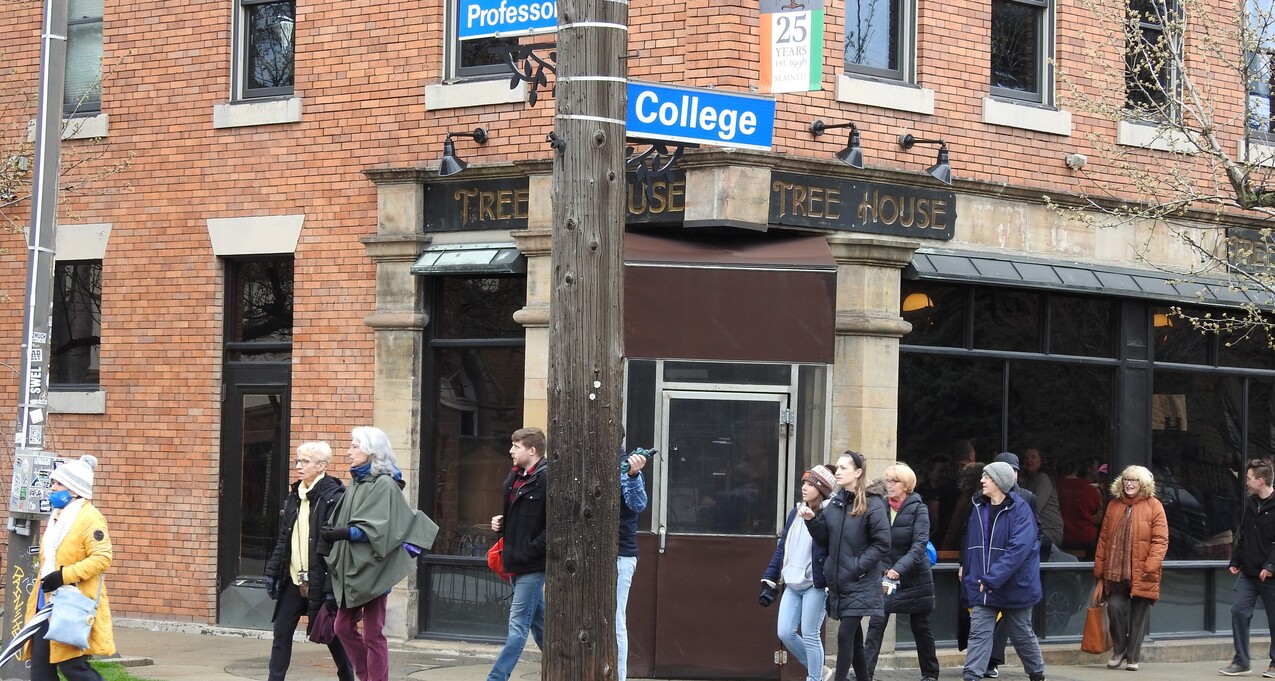 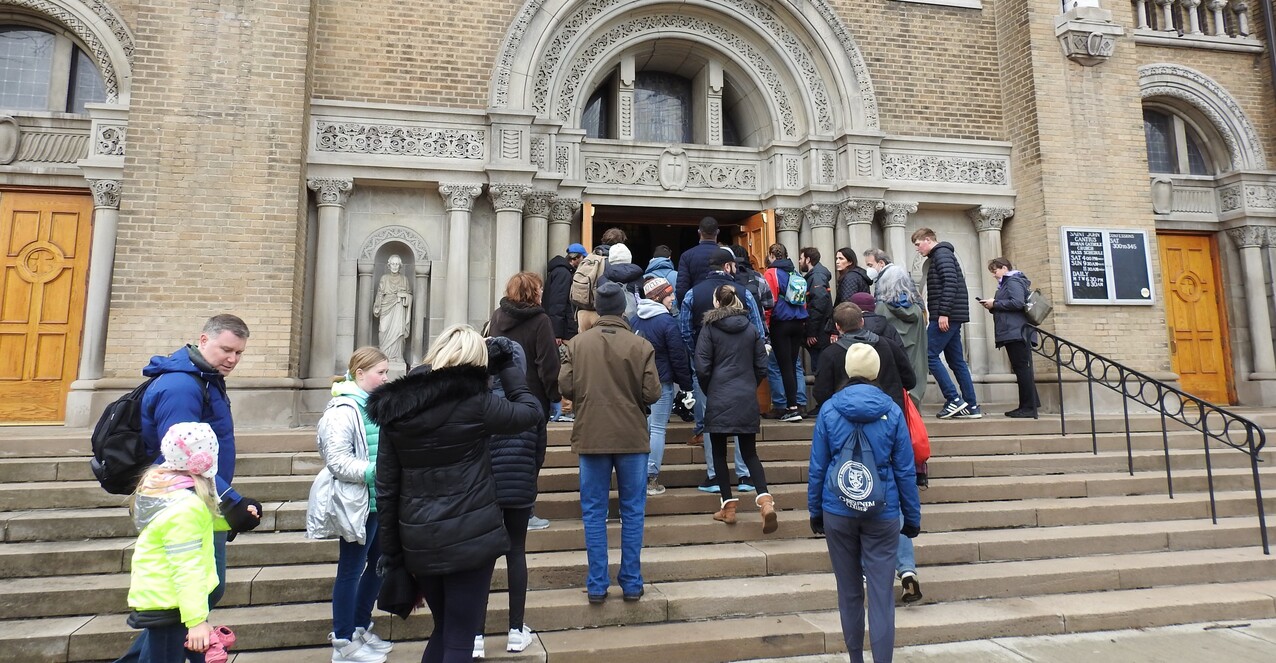 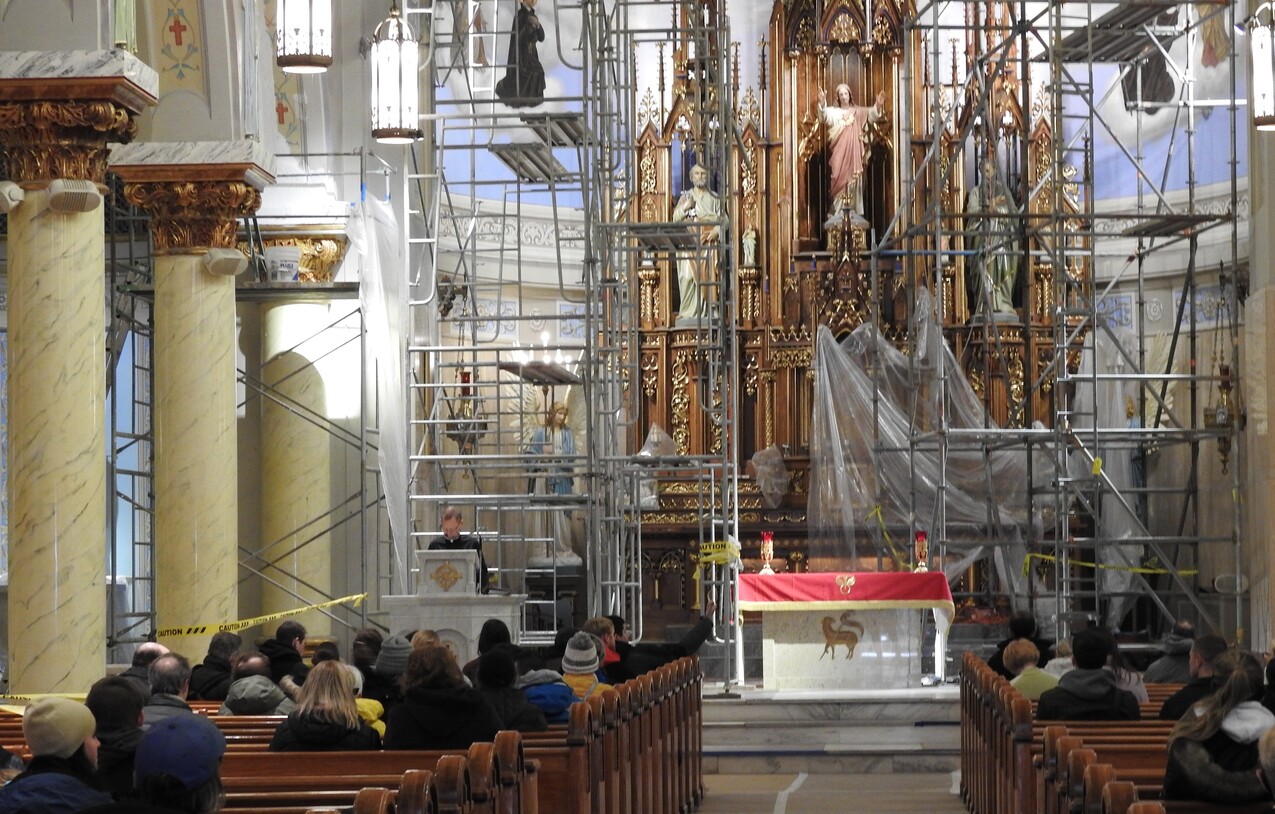 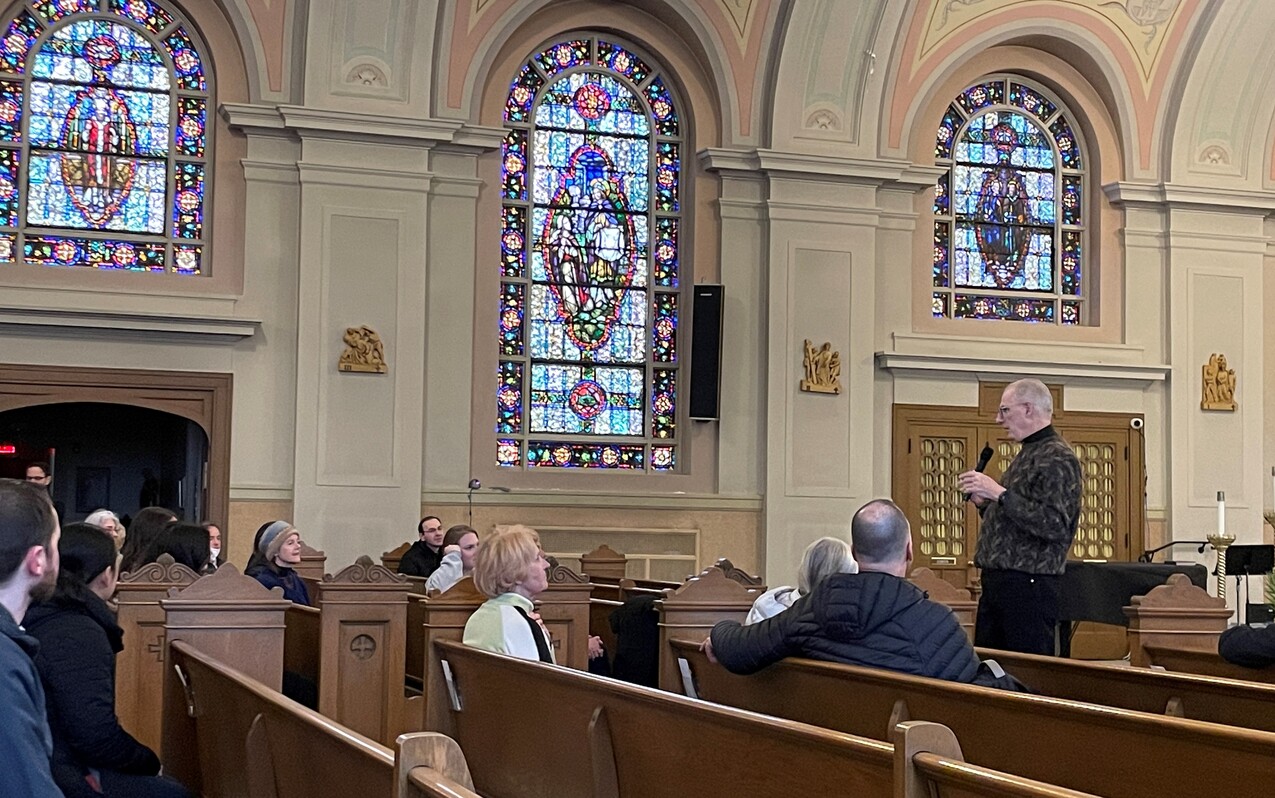 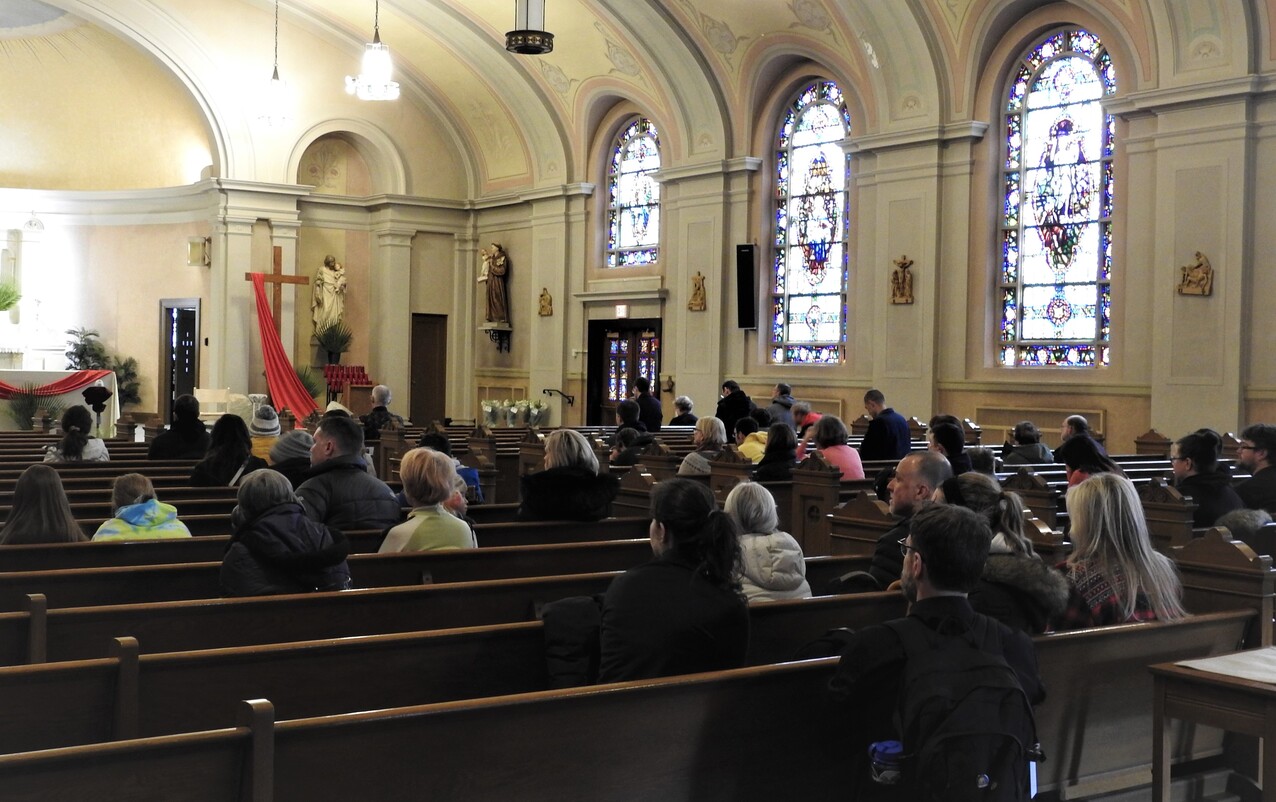 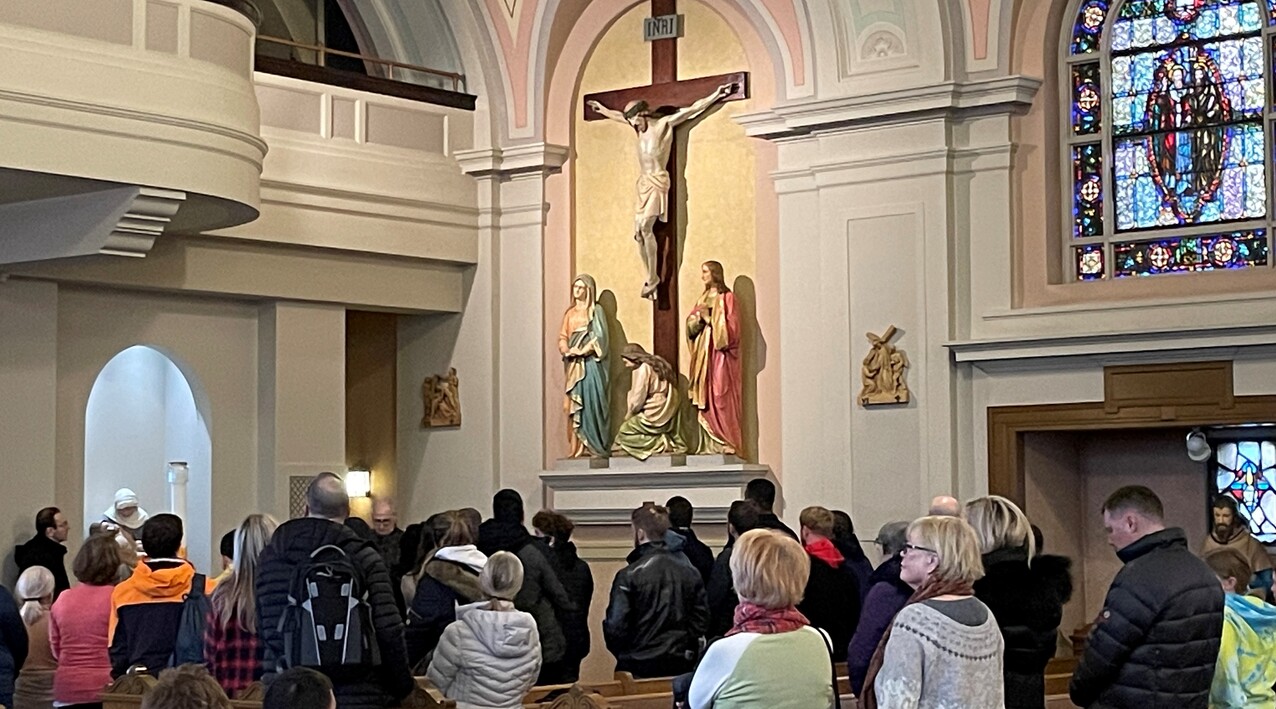 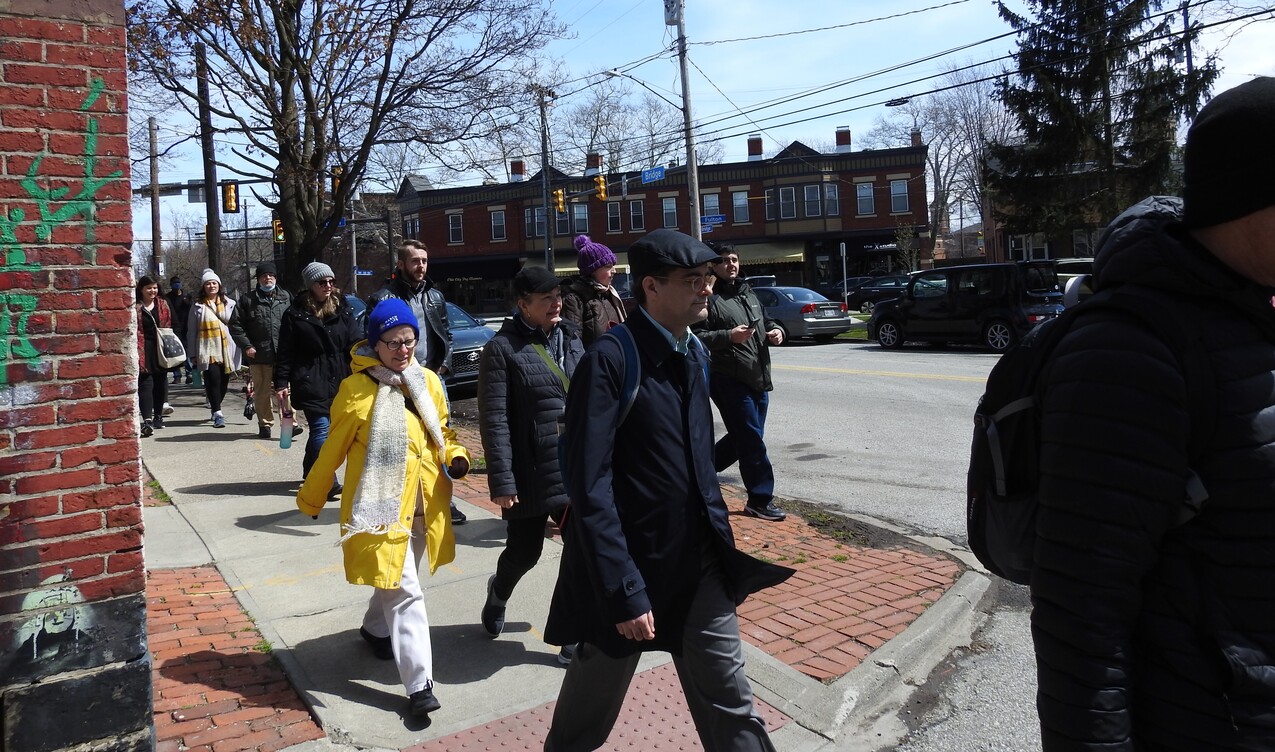 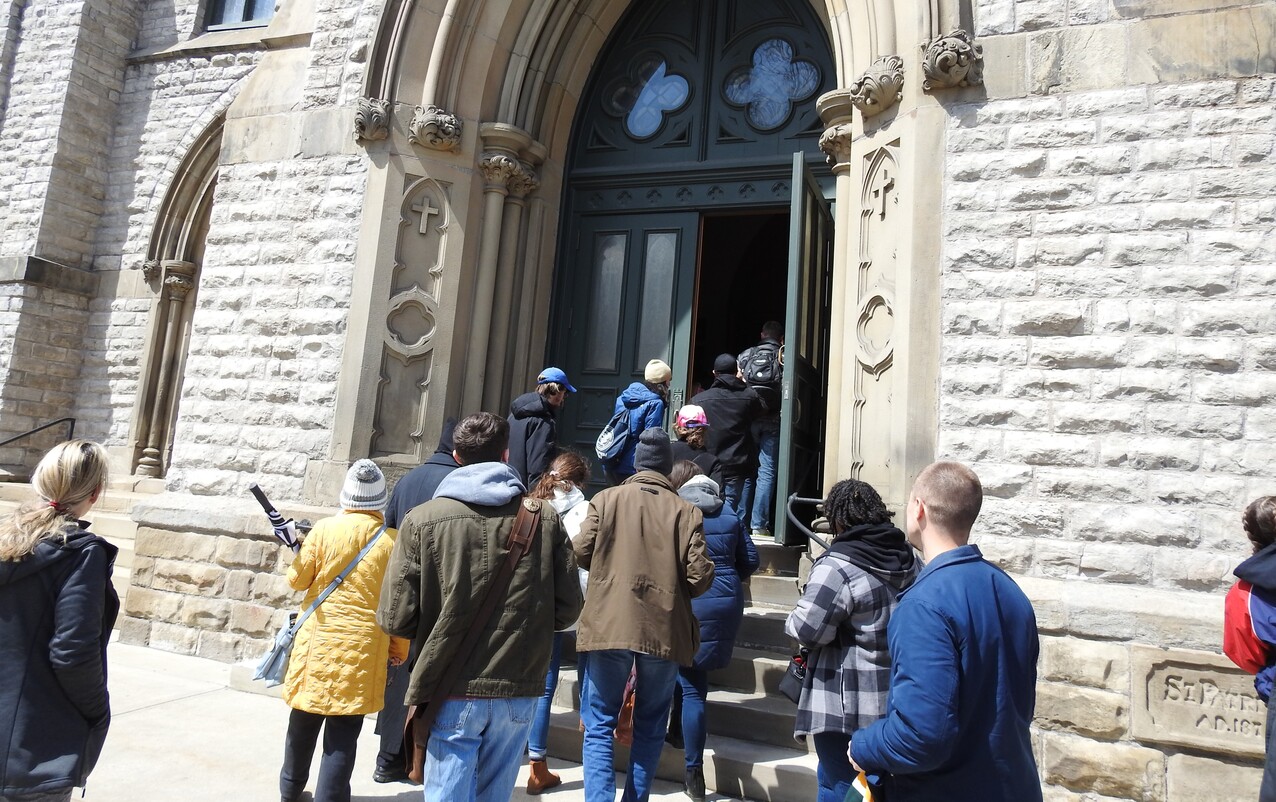 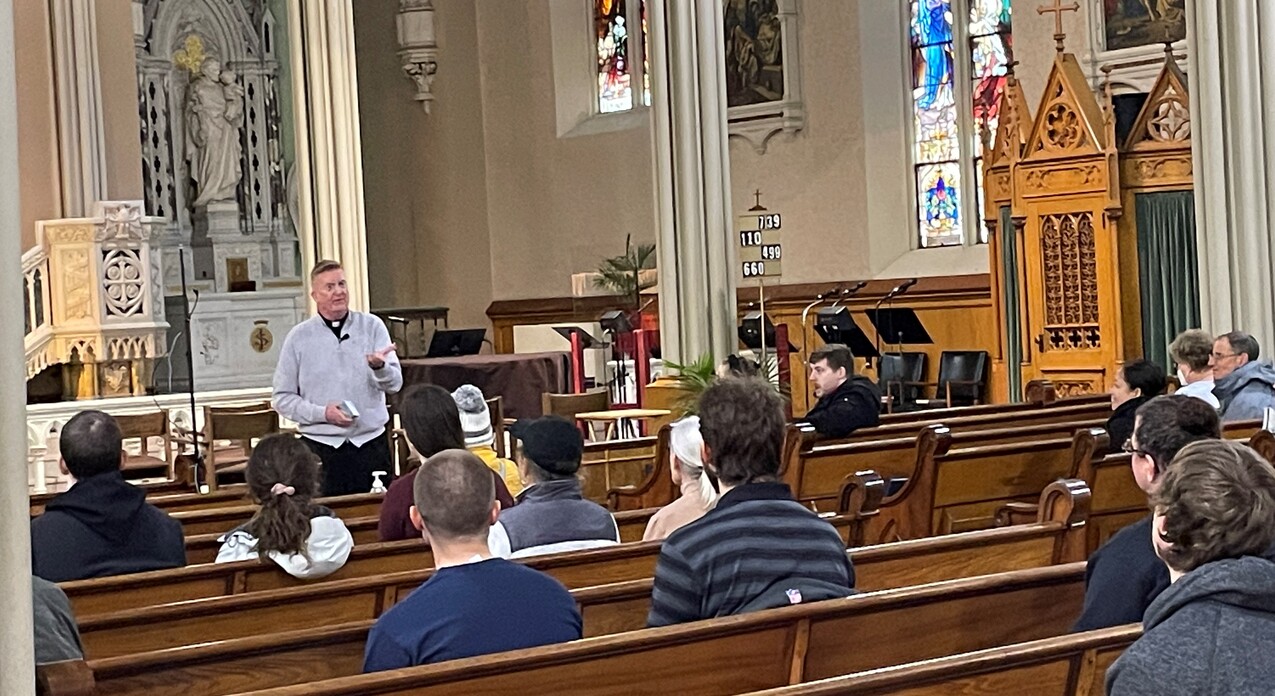 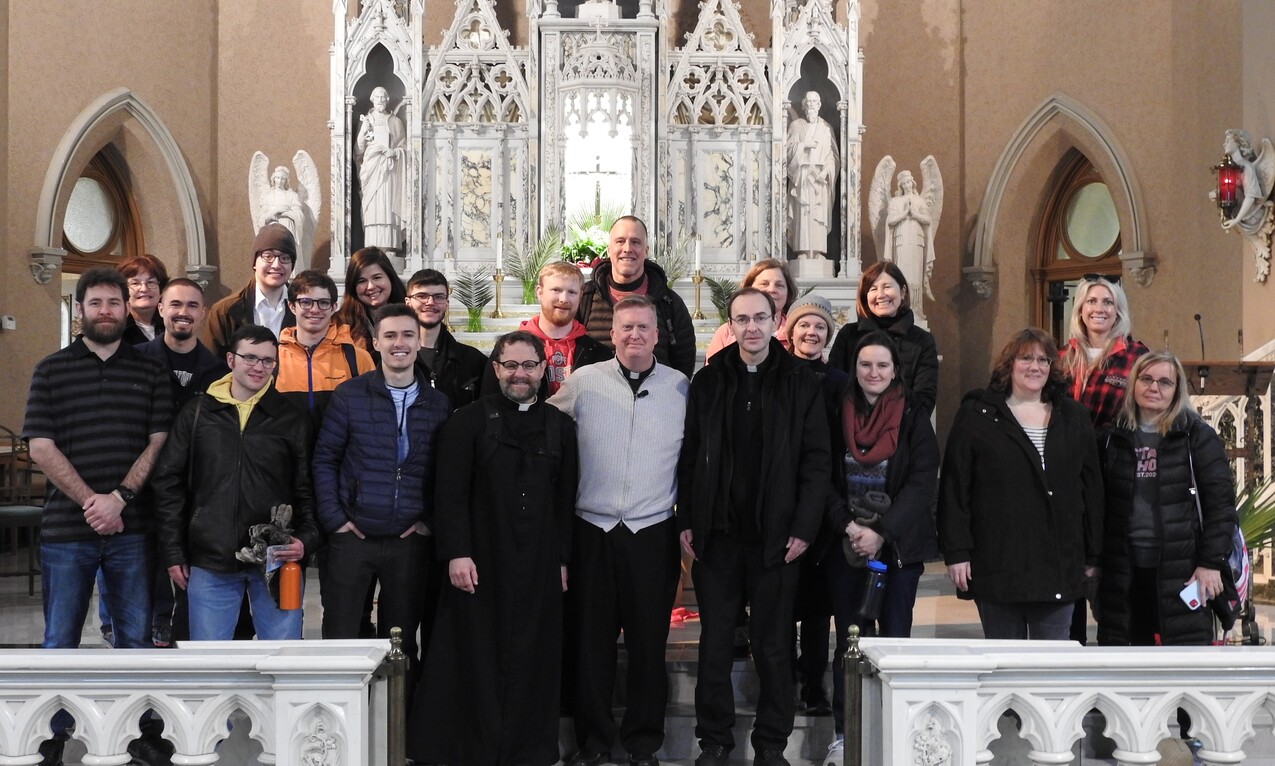 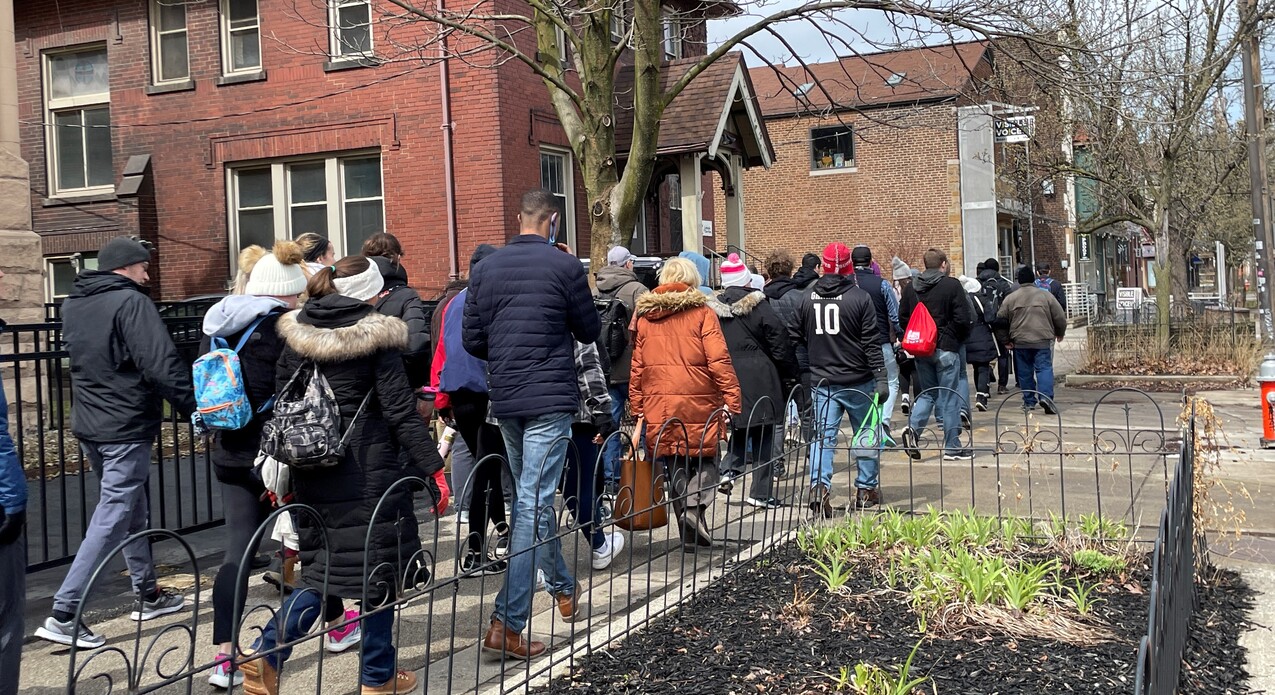 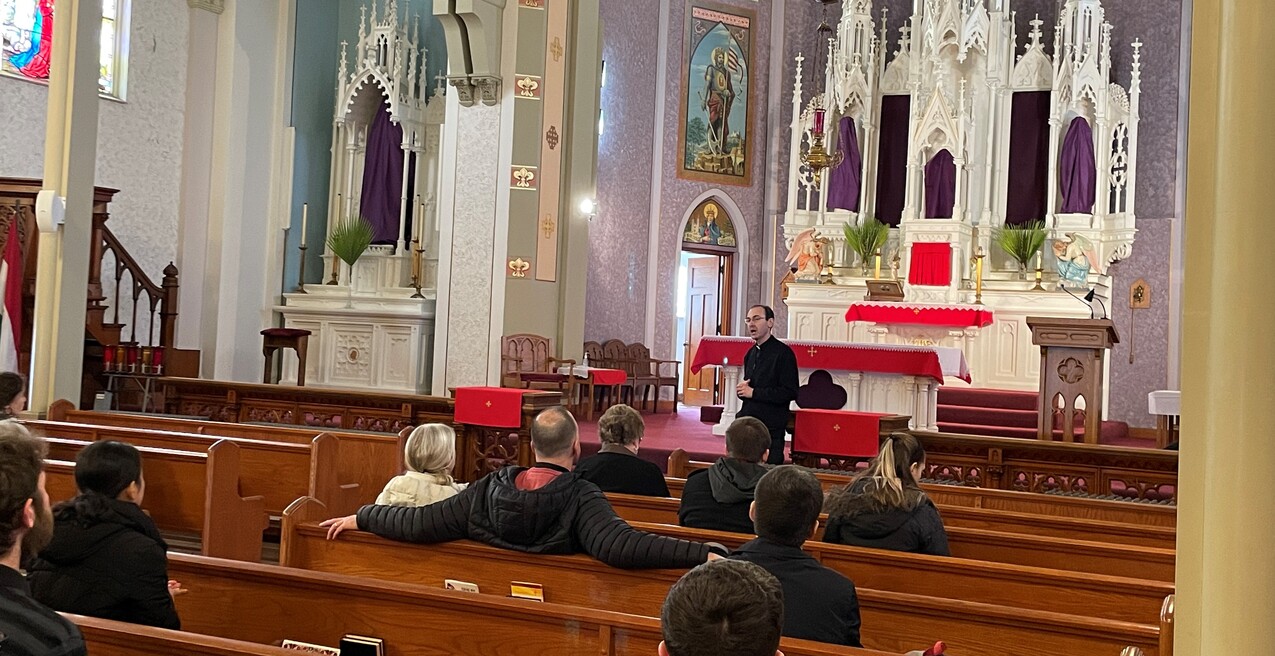 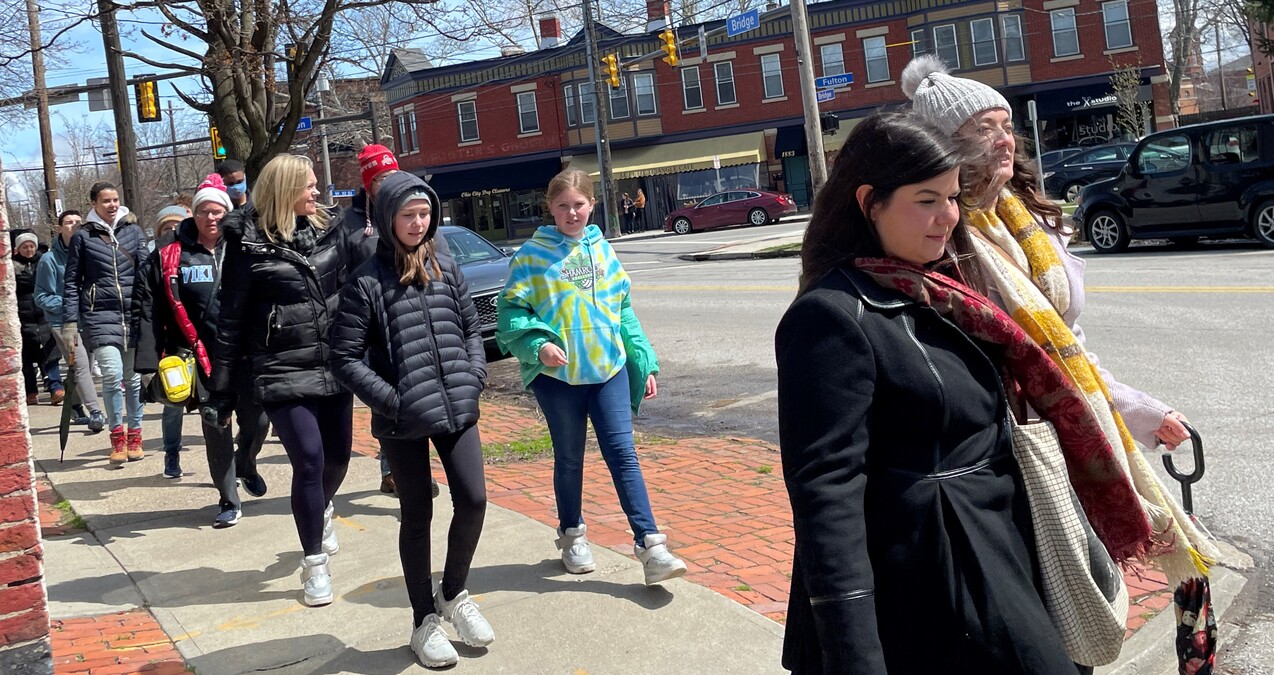 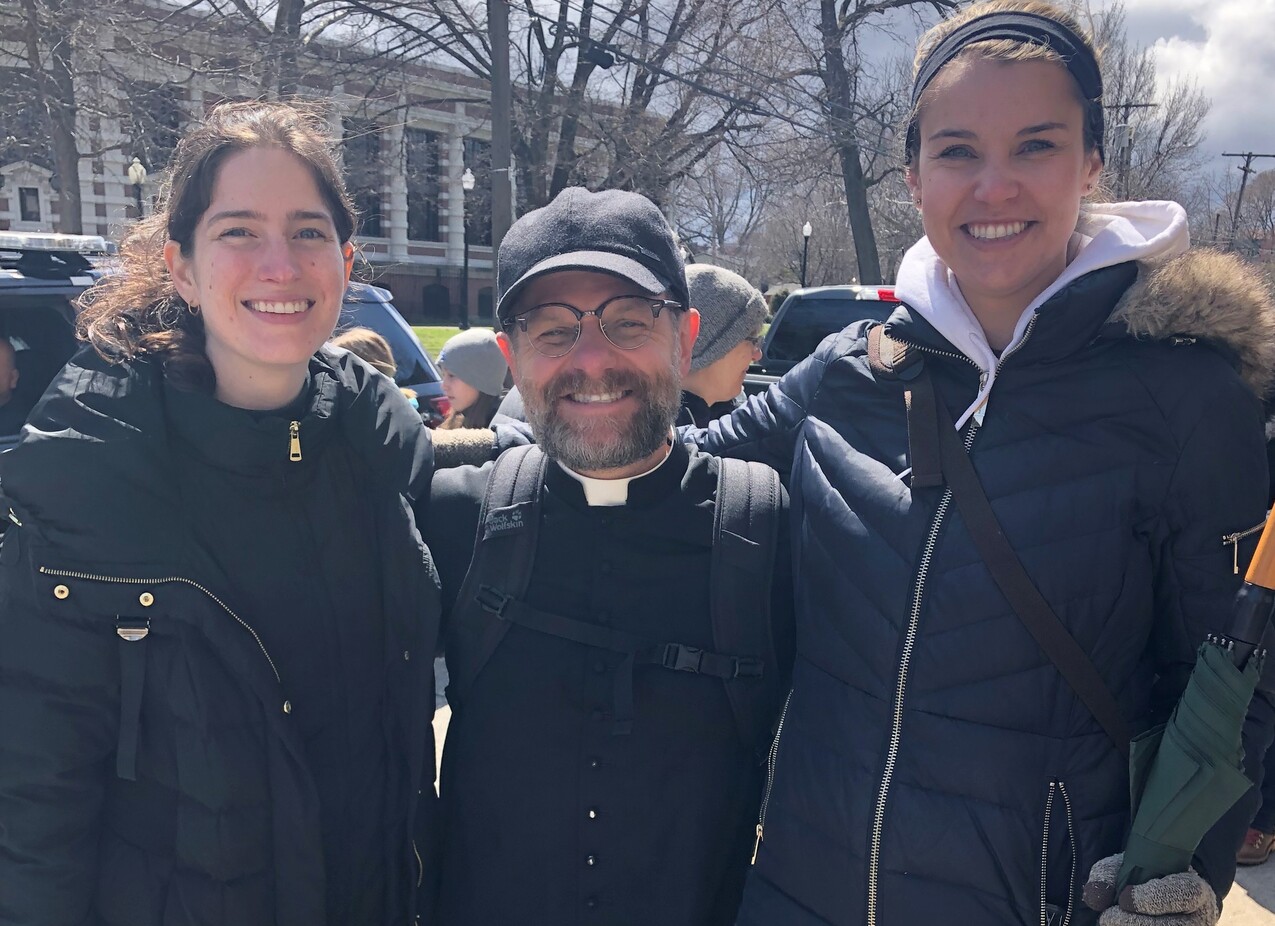 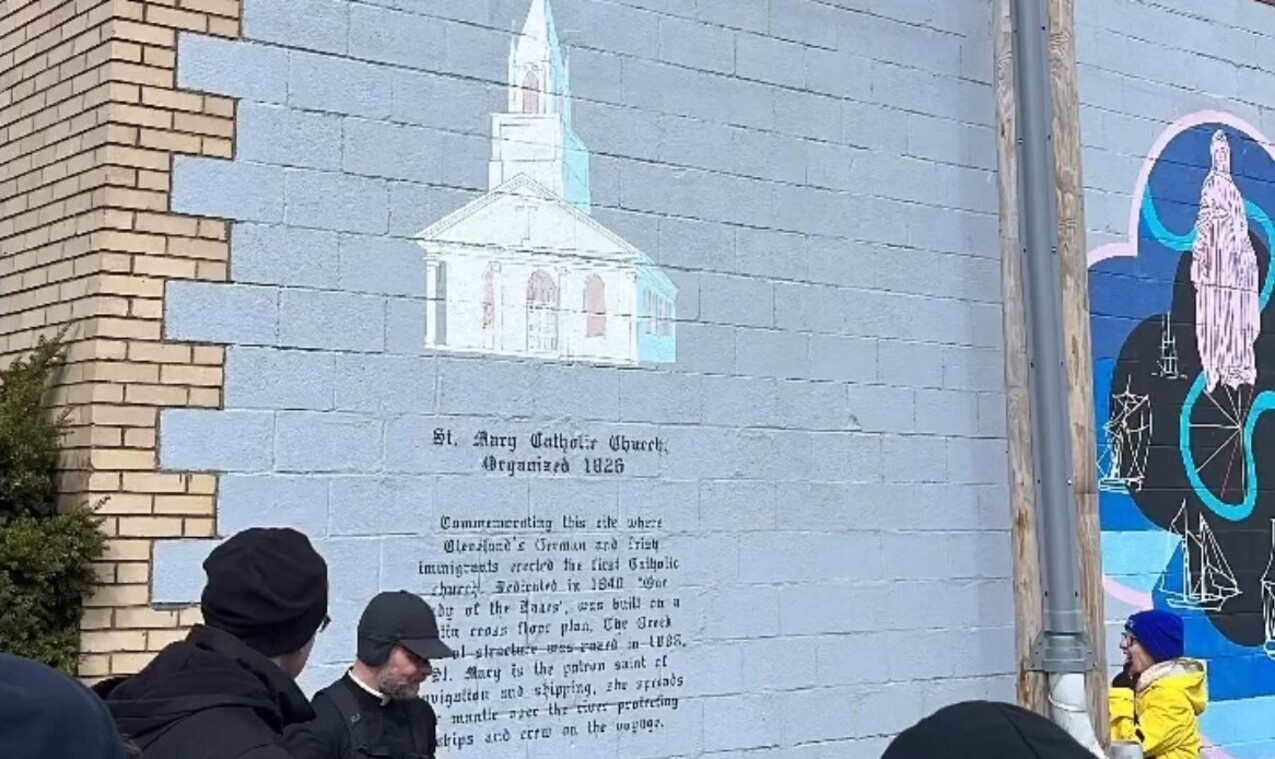 A steady stream of people entered the Cathedral of St. John the Evangelist the morning of April 9. They weren’t there for Mass or confession. Instead, nearly 100 people turned out for the first Seven-Church Walk, a walking meditation that focused on the seven last words of Christ from the cross. About 100 people participated in the pilgrimage, although some left early and others joined the group in progress. (See photo gallery above.)

Father Richard Bona experienced one of the pilgrimages in Washington, D.C., and was so moved that he wanted to bring the event to the Diocese of Cleveland. It is a variation of what’s called the station churches in Rome, where people move from church to church as they pray during Lent. He approached his seminary classmate, Father Damian Ference, vicar for evangelization and secretary for parish life and special ministries.

“I told him to go for it,” Father Ference said.

So, Father Bona mapped out six churches on Cleveland’s West Side that are within walking distance of the Cathedral of St. John the Evangelist. The cathedral was the starting and ending point for the pilgrimage. In addition to a meditation and short prayer time at each church, the pilgrims learned about the rich legacy of some of the diocesan parishes. Before leading the meditation, each pastor gave a brief history of his parish. They noted how the neighborhoods are changing, with gentrification taking place in many of the older areas of the West Side. As a result, there is a renewed opportunity for evangelization and parish growth.

The pilgrims stopped at:

The group returned to the cathedral for a closing prayer and some pilgrims attended the 4:30 p.m. Palm Sunday vigil Mass.

Those participating in the pilgrimage ranged in age from elementary school students to senior citizens. As they left the cathedral in the morning, most were using umbrellas to shield themselves from a cold, sometimes slushy rain. But by the time they arrived at the first stop – St. John Cantius – the sun was popping out. Although it remained chilly, the sun stayed out the rest of the day.

Most people walked the approximately seven-mile route. A police car accompanied them for safety.

John Veres of Independence, a parishioner at Mary Queen of Peace Parish in Cleveland, said Father Bona wanted to challenge some of the young adults in the diocese to live their faith more fully. He said the pilgrimage would help people better understand Jesus’ suffering as they meditated on his last words. Veres is involved with several Catholic young adult groups in the diocese.

“The beauty of the churches is transcendent. It speaks to the soul,” he added.

At St. John Cantius, Father Roach noted how Jesus chose his words wisely when he spoke from the cross because each time he spoke, it caused him excruciating pain. Yet, he still had mercy

Father Kropac invited the pilgrims to gather near a wall sculpture at St. Wendelin depicting the crucified Jesus with the Blessed Mother and St. John the apostle at the foot of the cross. He asked the group to meditate on Jesus telling Mary to “behold her son” and St. John to “behold your mother.” He noted that often the stained-glass windows, statues and other images in the church were used to tell a story and to help spread the faith.

Participants sometimes walked silently as they meditated and prayed, while others chatted quietly. They were advised to dress for the weather and to pack a lunch. Father Bona opened St. Emeric’s hall for their lunch break.

Many members of the group posed for a photo in front of the altar at St. Patrick Church.

“These churches are so beautiful,” one pilgrim was overheard saying. “They are hidden treasures. I hope this becomes an annual event.”

Father Ference said the event also helped showcase some of the older, inner-city parishes that many people may not have visited.