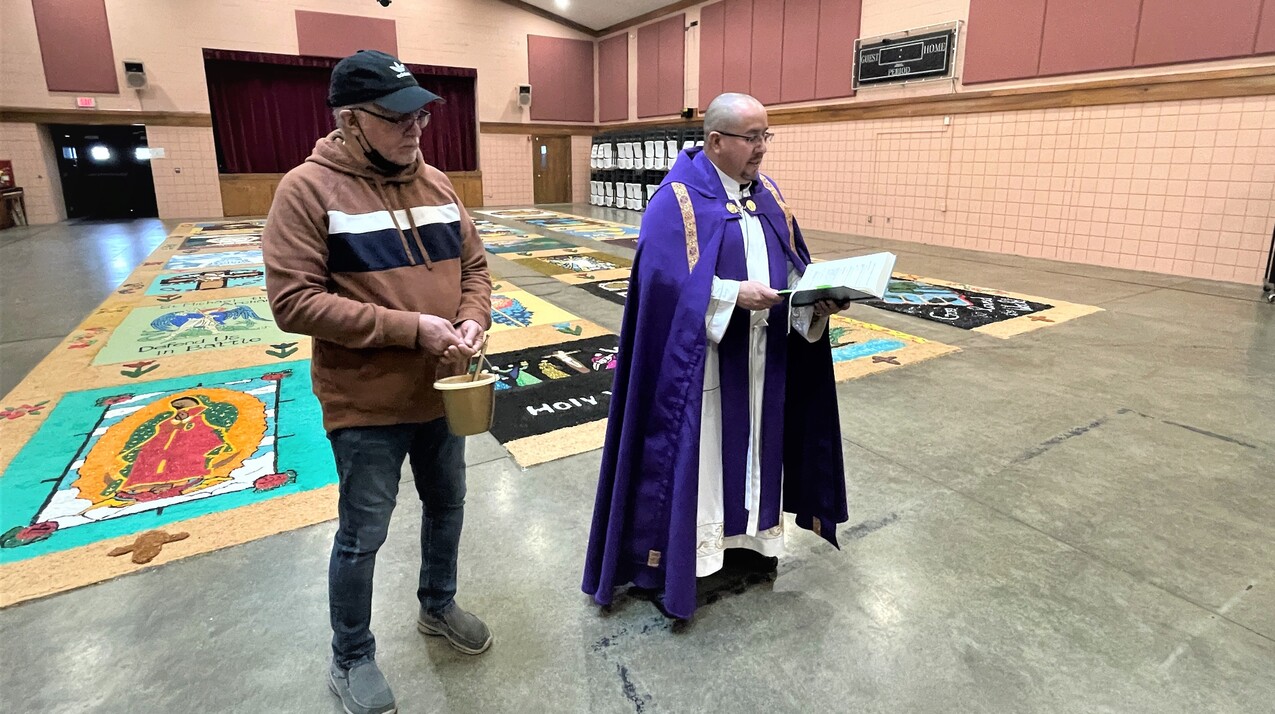 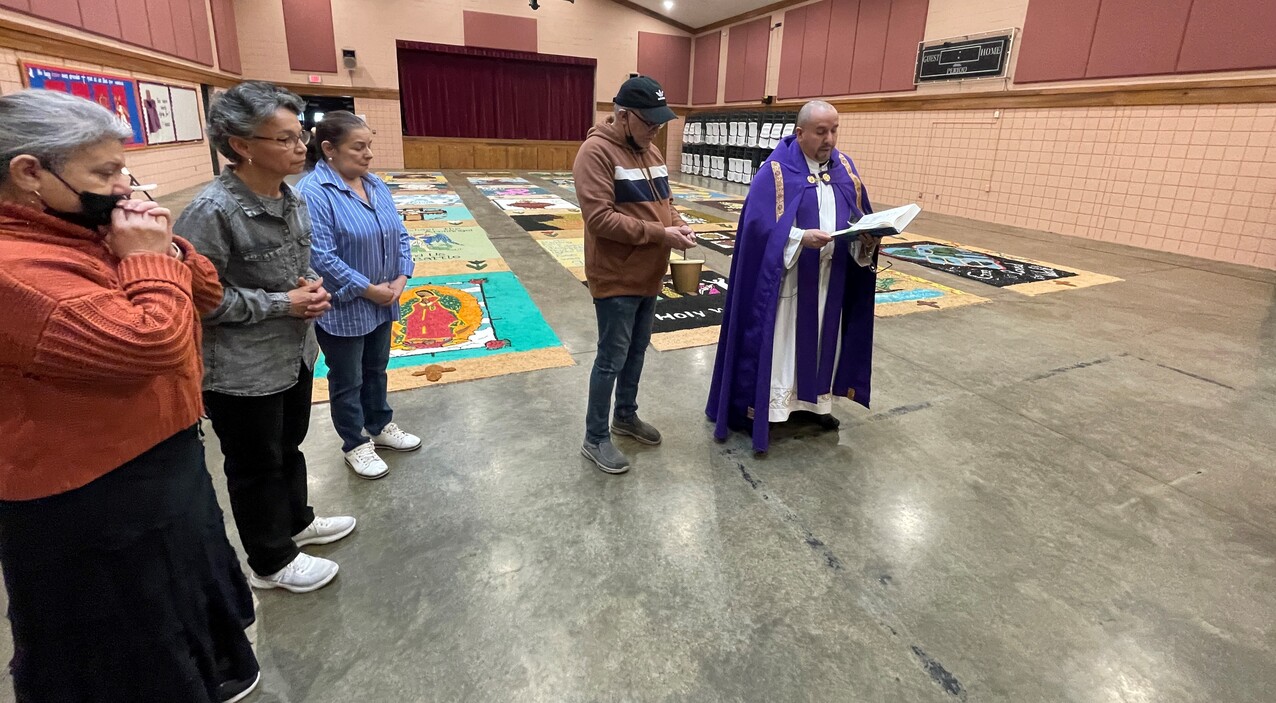 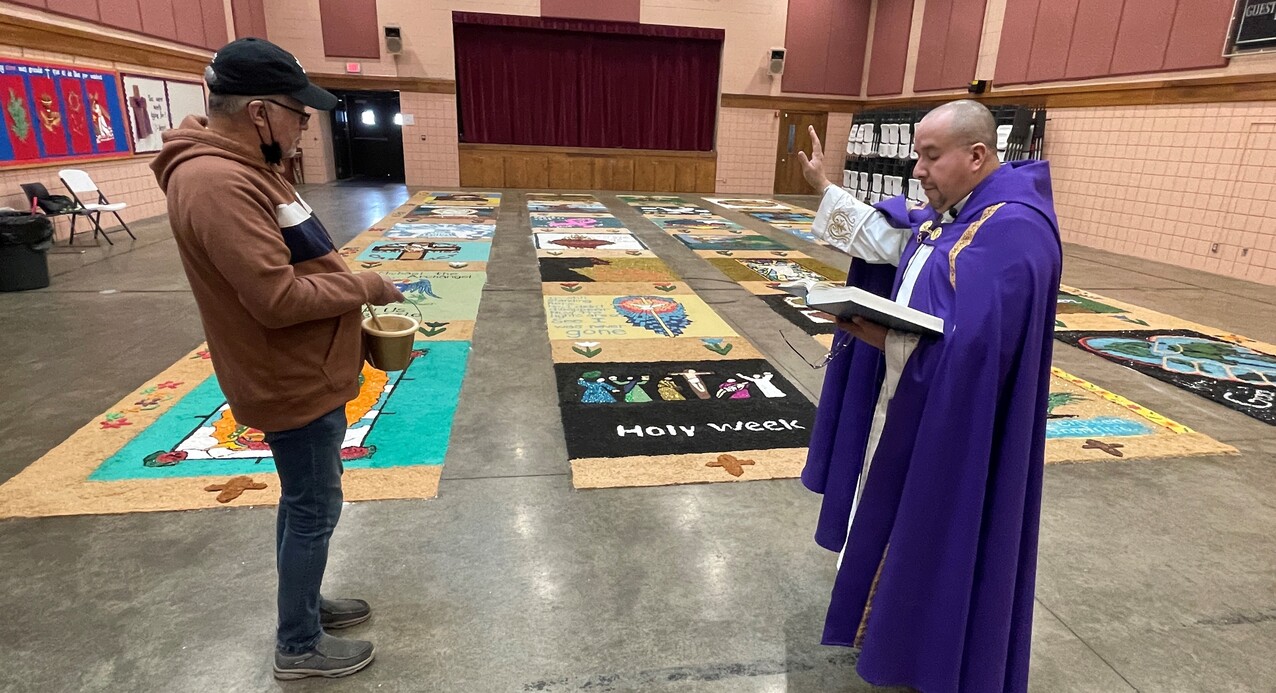 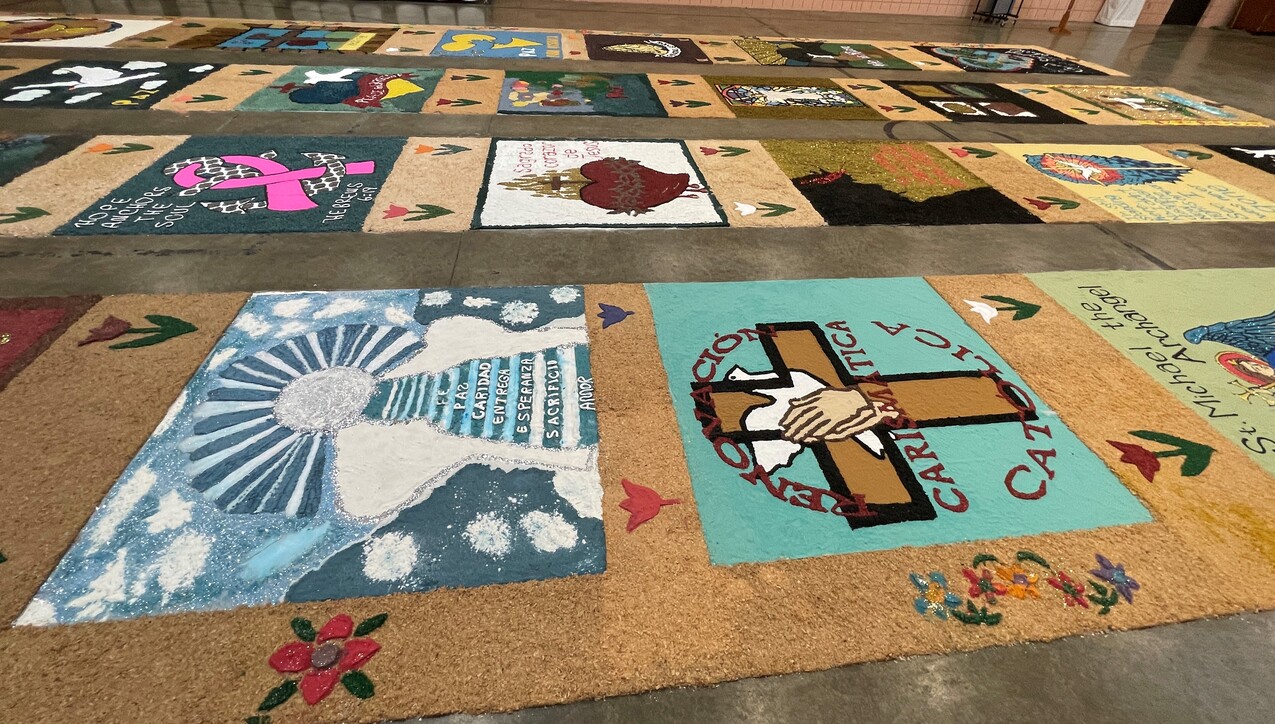 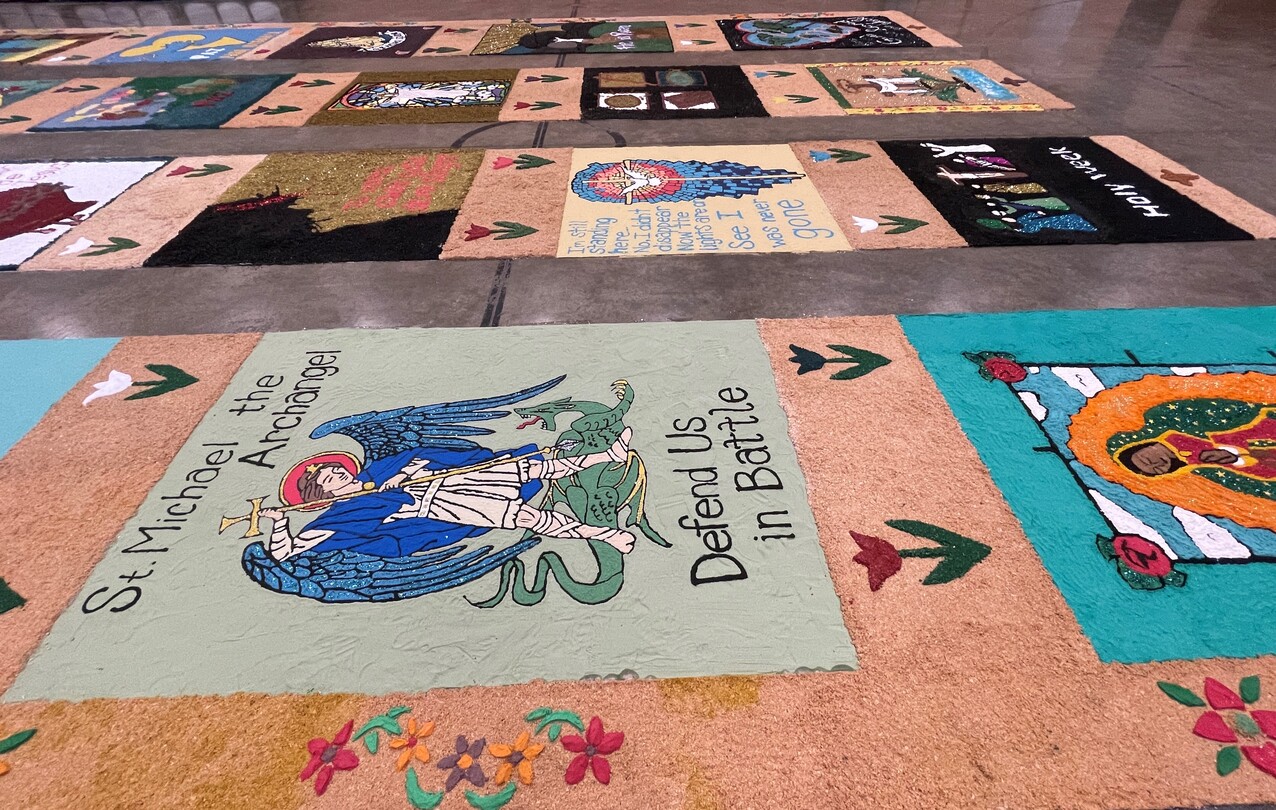 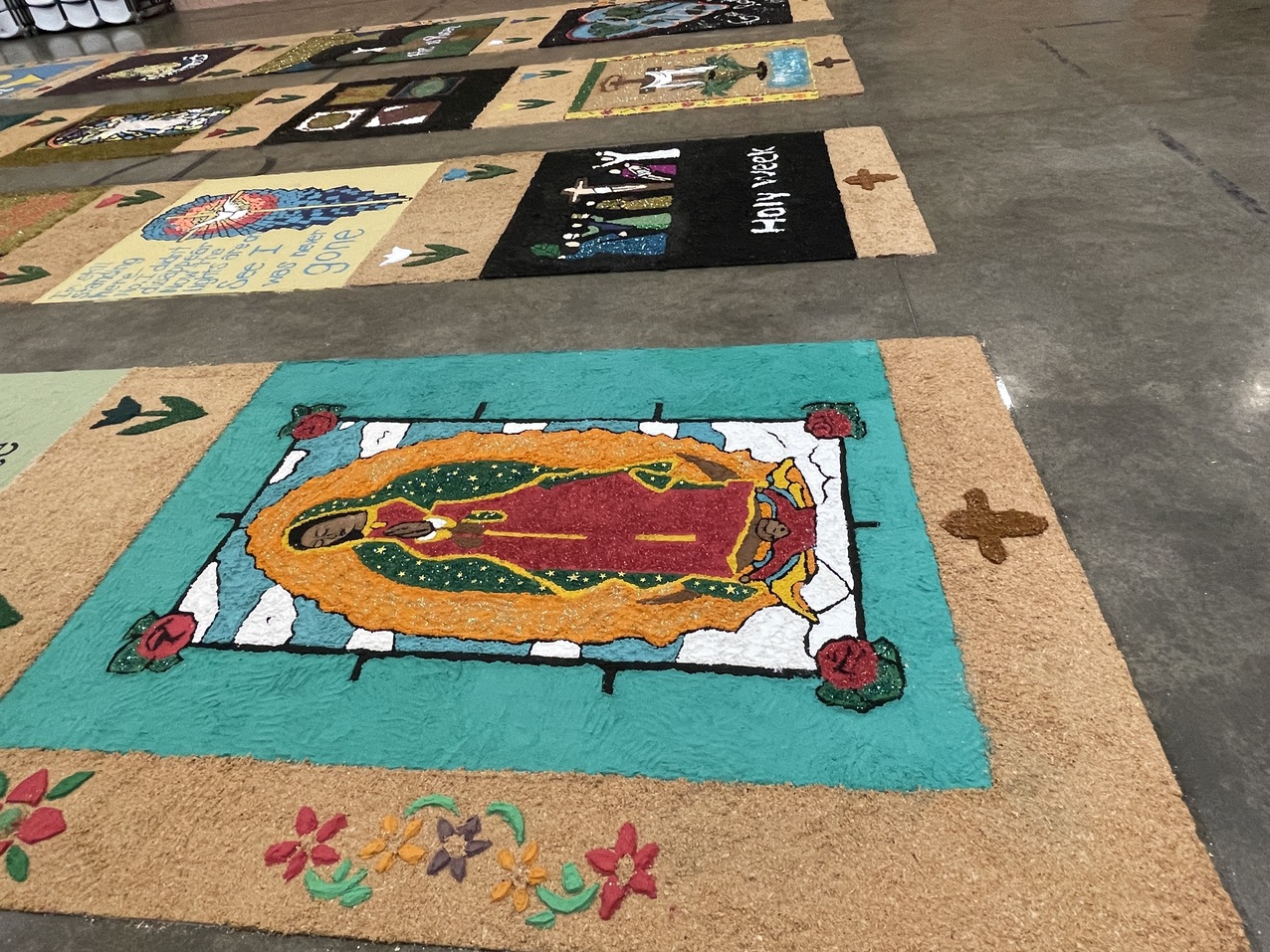 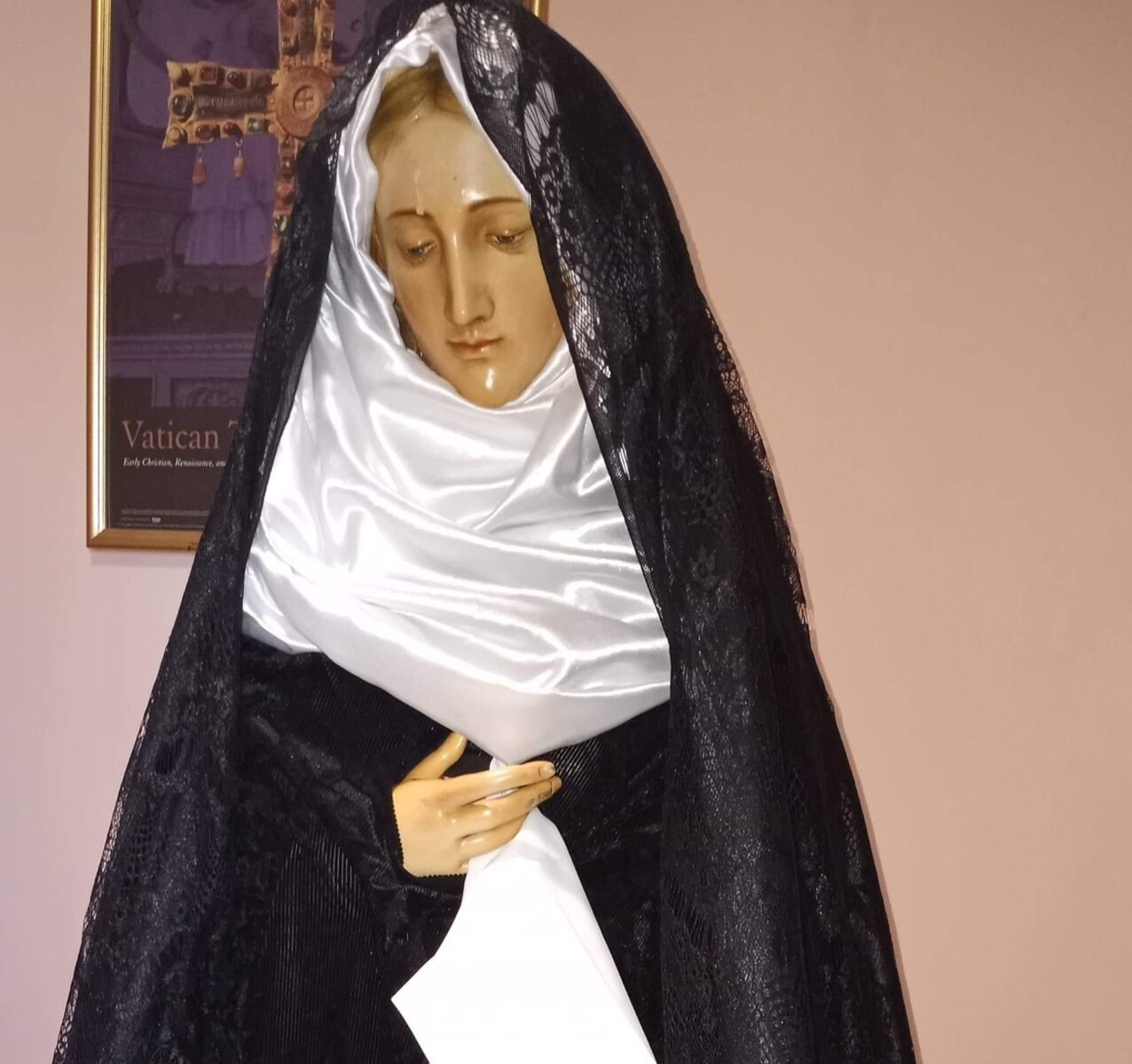 The parish gymnasium is lined with rows of intricately designed panels of religious-themed sawdust art, which can be viewed until the Mass of the Lord’s Supper at 7 p.m. on Holy Thursday, April 14, and all day Good Friday, April 15, until the 7 p.m. meditation on the Seven Last Words of Christ and the procession, during which the carpets will be trampled and destroyed.

Father Francisco “Paco” Honorato Garnica, CSJ, pastor said the public is invited to stop by to view the works of art. There were no carpets during 2020 as the coronavirus pandemic ramped up. Last year, there was a small version of the carpets. This year, the project is nearly back to the normal size.

There are 24 panels on the gymnasium floor – neatly laid out in four rows of six squares each -- depicting various religious themes. Several this year focus on peace, including a hope for peace in Ukraine. Another, created by Father Garnica, celebrates the 150th anniversary of the Congregation of St. Joseph, the religious order to which he belongs.

The Holy Week tradition began in 2013 as parishioner’s Eagle Scout project and it is continued by volunteers.

The carpets primarily are made of colored sawdust, sand, flour and salt – natural ingredients. Beginning on Palm Sunday, plastic was laid on the floor and the designs were traced on the plastic to make it easier for people to complete their panels. Some panels are created by Sagrada Familia parishioners or organizations affiliated with the parish, while others are from individuals, families or nearby churches or organizations. For example, Father Garnica said St. Michael the Archangel Parish created a panel this year. Volunteers had until April 13 to complete their panels. Father Garnica blessed the carpets on Holy Thursday morning.

Sawdust carpets have been a Holy Week tradition for centuries in some parts of the world. The tradition is believed to have started in Spain. It is common in Central America, especially Guatemala and El Salvador, where the Cleveland Diocese established a mission more than 50 years ago.

Father Garnica, a native of Mexico, said the carpets are popular there. Often they are outside and some lead through a neighborhood to the church. Just like here, he said they are trampled on Good Friday.

Sagrada Familia is adding a new element to its Good Friday liturgy this year. Father Garnica said a statue of the Blessed Mother has been dressed in black, like a Madonna in mourning. Parishioners are building a wooden “tomb” that will be carried into a corner of the church and a statue of Jesus will be laid inside. The Carpets of Holy Week will be destroyed during the procession through the parish building and into the church.

“It will be almost like a funeral procession,” Father Garnica explained. He said the statue of the Blessed Mother will keep vigil near the “tomb” until the Easter Vigil on Holy Saturday, April 16. The faithful are invited to spend time in prayer, silent reflection and adoration.

“When we sing the Gloria during the Easter Vigil, the ‘tomb’ will be lighted and opened so all can see the resurrected Jesus,” Father Garnica said.