Theology on the Rocks group learns about the paschal triduum 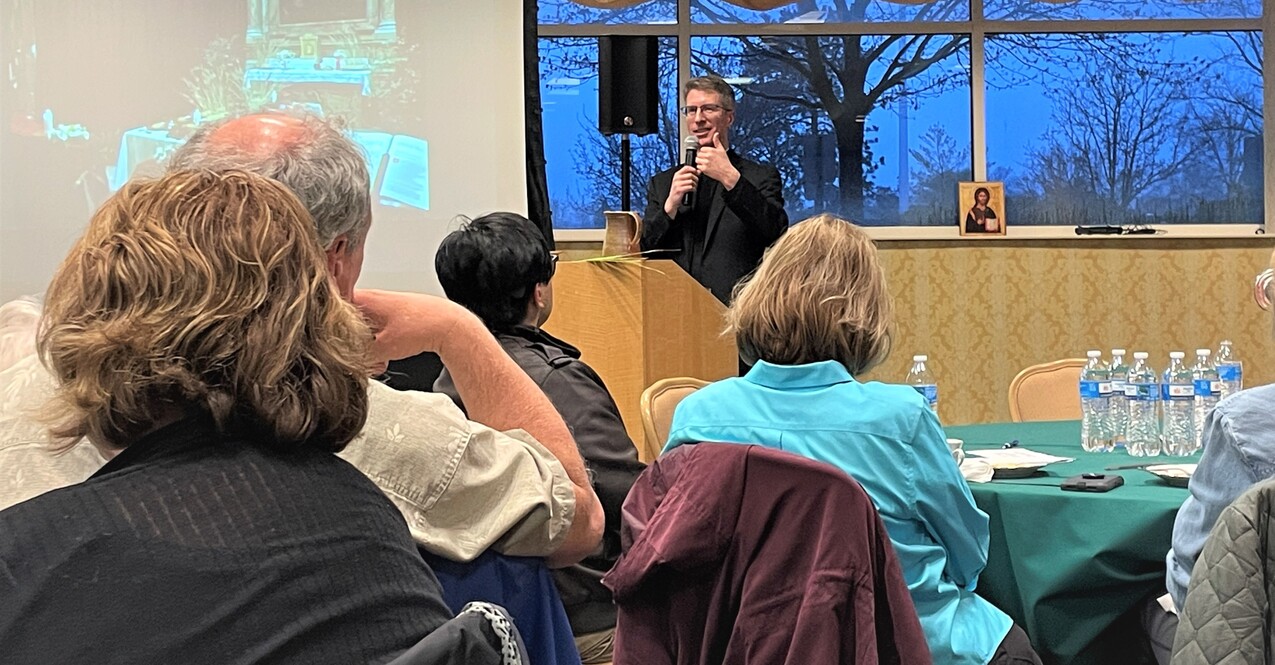 Nearly 60 people turned out on April 11 to hear Father Chris Trenta, a professor at Saint Mary Seminary and Graduate School of Theology, speak about the paschal triduum, the continuous three-day liturgy that begins on Holy Thursday and ends Easter evening. He made the presentation to Theology on the Rocks West, a Catholic-based discussion group for mature adults 40 and older.

Father Trenta explained that Lent ends on Holy Thursday, as the triduum begins. It took many years for the triduum, as it exists today, to evolve. “The triduum grew organically,” he explained, as the Church evolved. But the paschal mystery at the heart of the three-day liturgy has existed since the earliest days of the Church.

The Easter Vigil is a key part of the triduum, he said, noting this is when new Catholics are baptized and welcomed into the faith while others who have not completed their sacraments of initiation receive their first Communion and are confirmed. He said the Easter Vigil has been celebrated almost from the beginning of the Catholic faith.

He walked the group through the three-day liturgy, noting its elements re like penance for those in need of God’s mercy. At the end, on Easter, is the Resurrection.

“We have great hope of eternal life. We rise with Christ to new life and receive the Gospel,” he said. “As baptized Christians, when we suffer in order to love others, we receive God’s mercy.”

In many dioceses, Holy Thursday begins with the Chrism Mass, at which the sacramental oils are blessed and consecrated and priests renew their priestly promises. In the Diocese of Cleveland, this liturgy is celebrated on Tuesday of Holy Week. In the evening on Holy Thursday is the Mass of the Lord’s Supper, which reenacts Jesus’ washing the feet of his apostles and the institution of the sacraments of the Eucharist and holy orders. After the Mass of the Lord’s Supper, there is no dismissal. The Eucharist is taken in a procession to an altar of repose, where people can spend time in adoration. Also, the altar is stripped and the sanctuary is made as bare as possible in preparation for Jesus’ death and placement in the tomb. In addition, the church bells are silent until the Gloria is sung at the Easter Vigil, Father Trenta added. 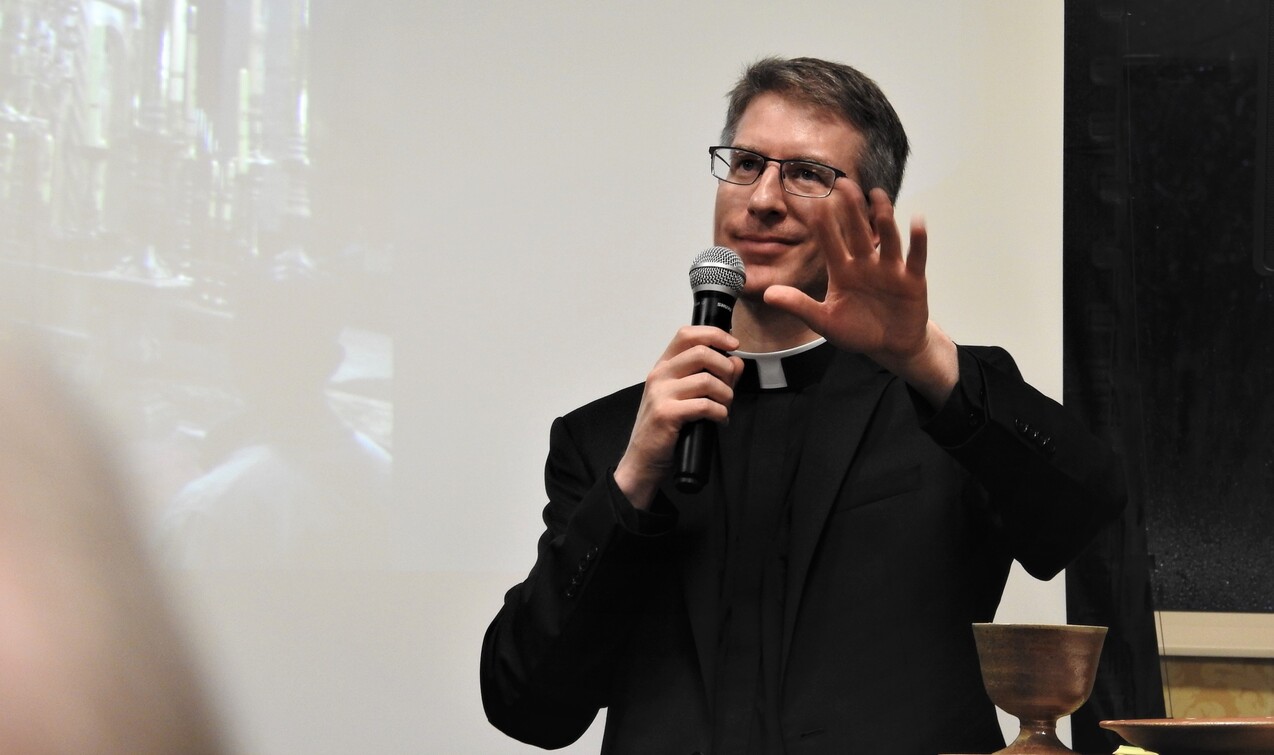 While studying in Rome, Father Trenta said he became aware of many Catholics who went from church to church for adoration during the night on Holy Thursday. In some churches, a table was set for the apostles, as it might have been at the Last Supper, complete with loaves of bread.

In earlier times, bishops washed the feet of their priests. Over time, priests began to wash the feet of men from the congregation, and in more recent years, Pope Francis changed canon law so anyone of any age can have their feet washed. This is symbolic of taking on the promise of service to others, which is part of our mission s members of the Catholic Church.

“The mystical body is called to rise, to go out and to serve,” Father Trenta said.

On Good Friday, Mass is not celebrated. Instead, Father Trenta said, there can be Stations of the Cross, a Passion liturgy or other similar things. In some churches, there is a reflection on the Seven Last Words of Christ from the cross.

During the Good Friday liturgy, he said we pray for a number of intentions including the Holy Father, those of other faiths, those of with no religion, etc., which leads to the veneration of the cross. The cross is uncovered/unveiled bit by bit as we remember what Jesus went through to give us eternal life.

In the early years of the Church, Father Trenta said crucifixion was considered scandalous, so crucifixes did not become common religious items until a few centuries later. Before that, people looked to the story of Jonah and the whale, which also was a symbol of suffering and resurrection.

After veneration of the cross, the faithful can receive Communion, which was consecrated at the Mass of the Last Supper on Holy Thursday.

“There is no Mass on Good Friday,” Father Trenta said, noting it is a time “for the Church to quiet itself. We’re in a sense grieving, journeying with a missing Christ,” he said, explaining that Jesus was in the tomb at this time.

On Holy Saturday, final preparations are made for those being received into the Church during the Easter Vigil. Food for the Resurrection/Easter breakfast can be brought to the church and blessed. “Ideally, blessed food should be the first thing eaten after receiving the Eucharist,” he said.

Father Trenta told the group that before Vatican II, there was a strict fast. Those 14 and older could not eat from Good Friday until after receiving the Eucharist on Easter (or at the Easter Vigil).

The Easter Vigil begins in darkness. A fire is built and blessed and a candle is lit so the faithful can see the light entering the church. He said there is an exultant chant of thankfulness to God for the gifts of creation. There are seven readings during the liturgy that retell the story of creation, man’s fall from grace, the formation of the people of Israel, famine, slavery crossing the Red Sea and baptism -- the history of salvation. 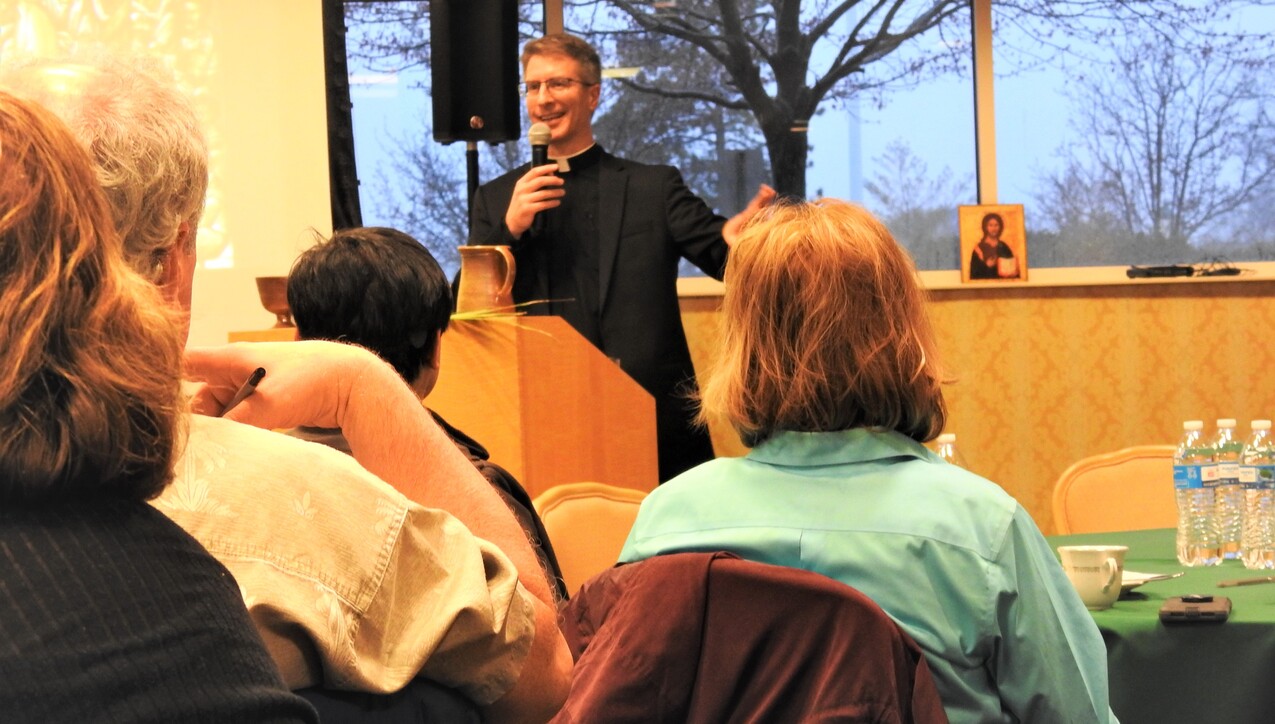 The congregation renews their baptismal vows and the Gloria is sung, with the church being fully lit and the bells ringing to announce the Lord’s Resurrection. “We also sing alleluia again,” Father Trenta said.

The baptismal rite includes the litany of the Saints, renouncing Satan, handing over of the white garment that signifies Christian dignity and foretells the pall that will be used at our funeral, the baptismal candle, anointing with sacred oil, pouring of water on the head (or immersion). This all leads to the Eucharist.

“The triduum is a full, three-day journey through the Passion and suffering after which Christ rises and enables us to live with him,” he said.

Sister Rita Mary Harwood, who retired recently as secretary of Parish Life and Development, will address Theology on the Rocks at its May 9 meeting at LaCentre in Westlake. Sister Harwood remains active with Migration and Refugee Services, Catholic Charities, Diocese of Cleveland. Theology on the Rocks West meets at 7 p.m. the second Monday of the month. Click here for more information.