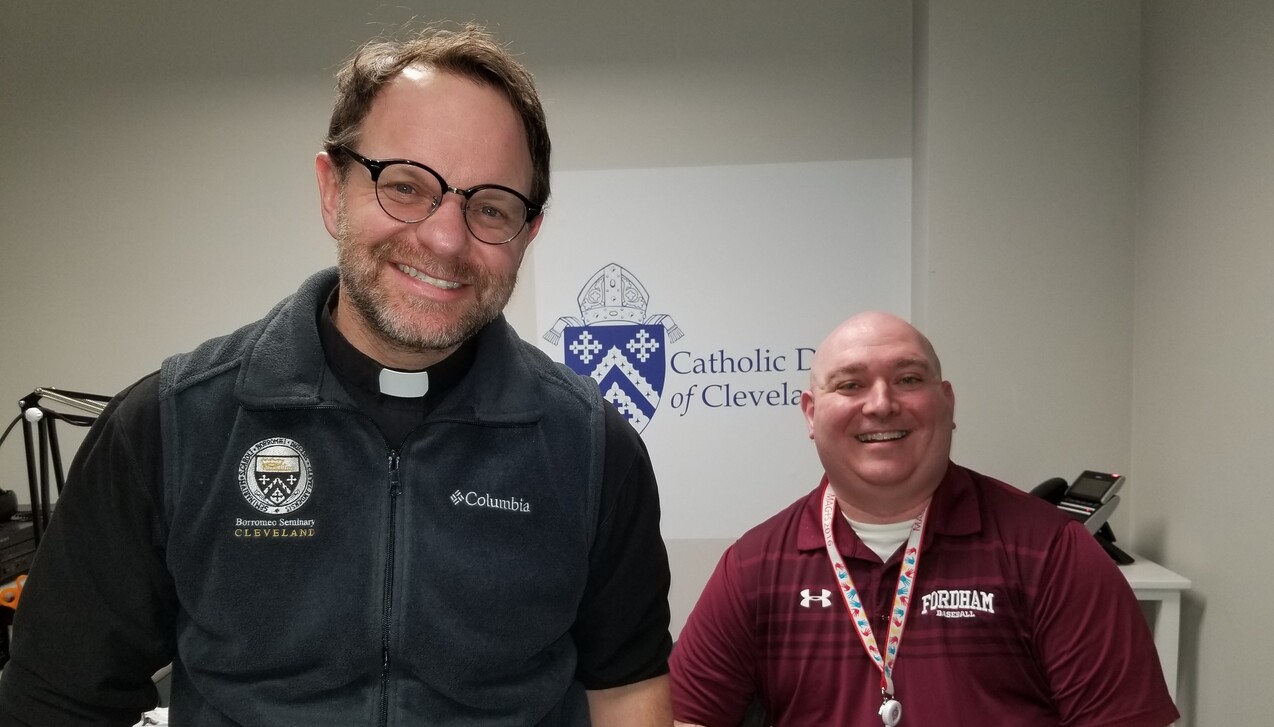 When it comes to evangelization, Father Damian Ference wants to leave no stone unturned.

As the first vicar for evangelization for the Catholic Diocese of Cleveland, he loves collaborating with the team in the Parish Life and Special Ministries Office, which he also leads. One of those collaborators, Mike Hayes, director of the Young Adult Ministry Office, has broadcast experience. While discussing new ways to evangelize, they decided to try a podcast. Soon after, “Question of Faith” launched.

So far, 18 Question of Faith podcast installments have been released. The episodes average 20 minutes in length. They tackle a question of faith each week and feature rotating guests including some people from the diocesan offices. Terri Yohman, director of the Marriage and Family Life Office; Francine Costantini, director of the Youth Ministry Office; and Miguel Chavez, director of the Missionary Discipleship Office are among the guests who have appeared. 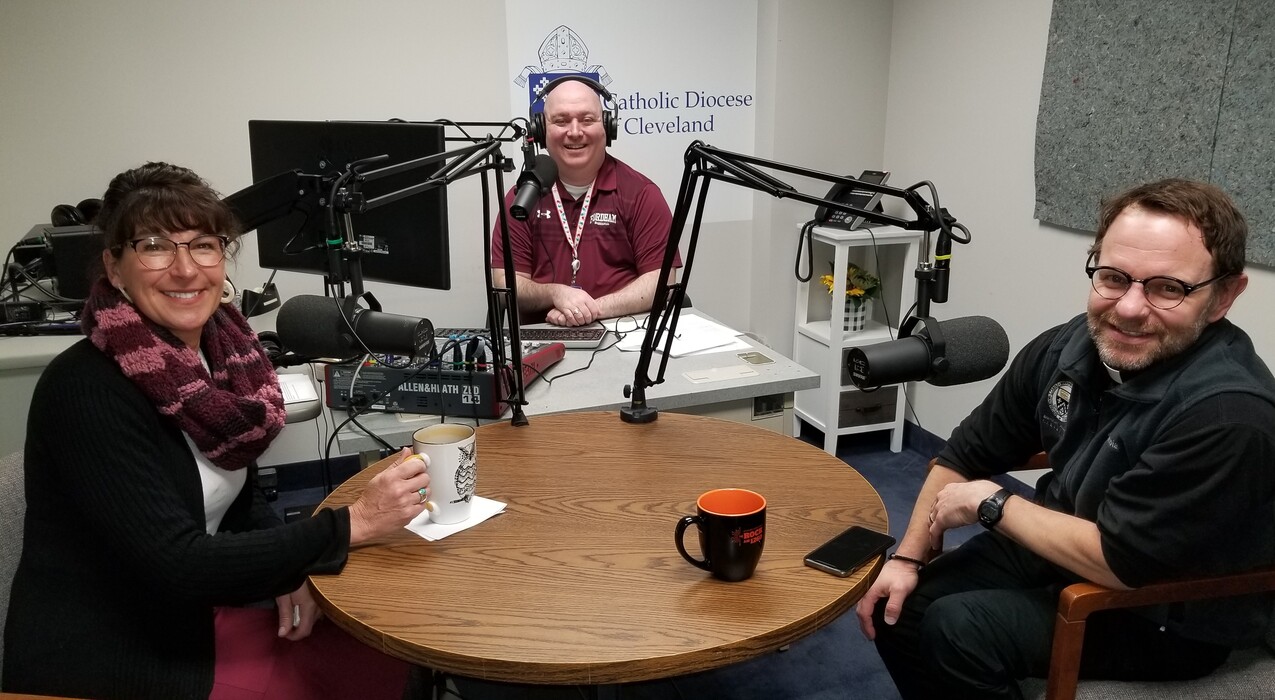 In addition to a guest discussing the weekly topic, each episode highlights a parish in the diocese and offers a snippet of the coming week’s Gospel. Podcasts are recorded in the Communications Department’s studio and released on Tuesday afternoons.

The initiative has been well received, with more than 1,000 downloads in its first few months. Episodes can be found wherever people get their podcasts, including platforms like Apple podcasts and Spotify. They also can be accessed here on the Young Adult Ministry page of the diocesan website.

“We invite people to submit questions of faith for the episodes,” Hayes said, noting there is a form available online. “Sometimes, we rip stories from the headlines,” he added. Other topics may be issues in the diocese or the Church in general.

Among the topics discussed so far on the podcast are:

“No question is out of bounds,” Hayes said. “You ask and we’ll answer honestly.”

Father Ference, who recently earned a doctorate in philosophy from the Pontifical University of St. Thomas Aquinas in Rome, Italy, offers a theologian’s perspective on the topics while the guests offer expertise in their areas. Hayes keeps the episodes on track and edits them before they are released.

Podcasts are popular now, but Hayes said about 20 years ago when someone mentioned the idea, he had to research it because the concept was so new. At that time, he was working in New York, He and another person were working with Paulist Father Dave Dwyer and they started Busted Halo Ministries. Father Dave, as he’s known, had a college friend who wrote a book on podcasts and they decided to try producing one. The idea proved very popular and morphed into what now is the popular “Busted Halo” radio show, heard daily on Sirius XM’s The Catholic Channel.

Hayes said Busted Halo also includes a robust online/website presence, retreats, speakers and more. The radio show complements the other aspects of the ministry. He produced the radio show for a short time after its premiere. 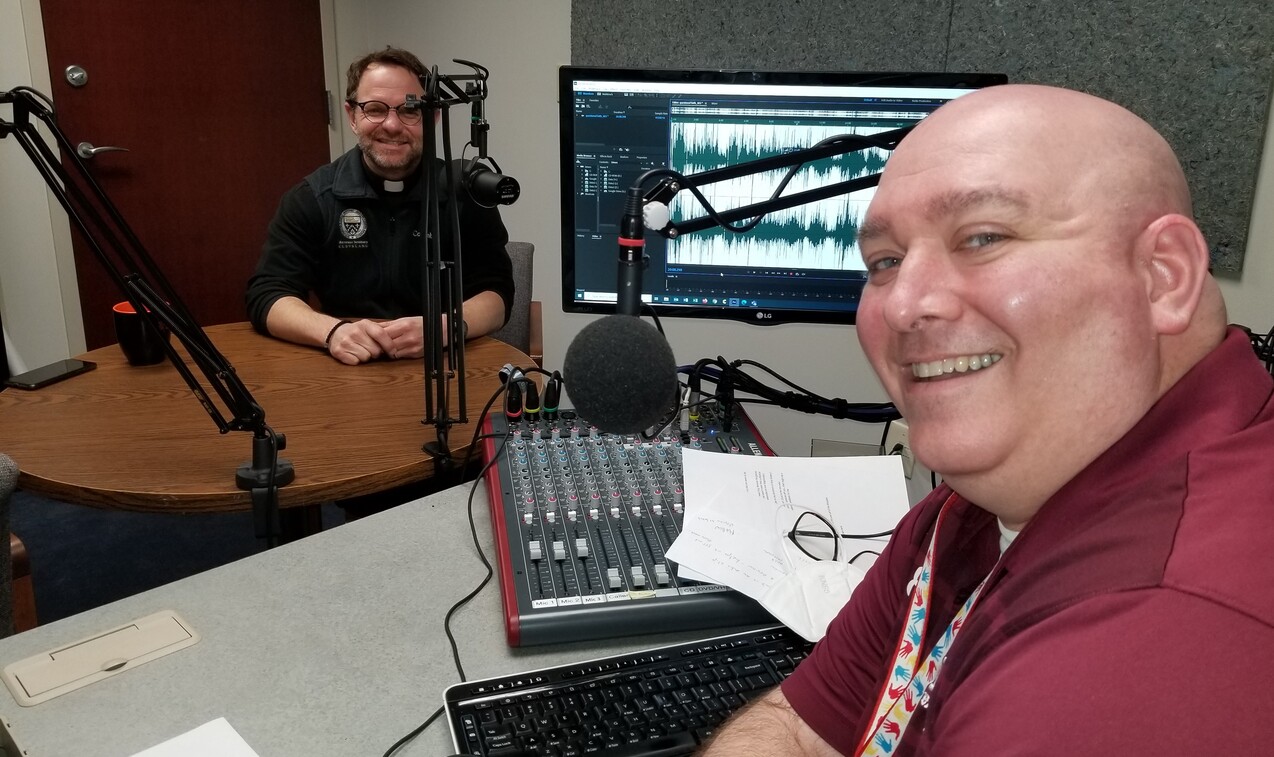 Hayes, who’s been involved with young adults throughout his ministry career, previously produced shows at a couple of New York City radio stations in addition to his work with Busted Halo. He’s also written two books.

“I’ve wanted to get back into this (podcasting) for a while,” he said. “I mentioned the podcast idea to Father Damian and he said, ‘Yes, let’s do it.’” The rest is history.

The shows are informal and produced live.

“It’s just a conversation among the three of us – Father Damian, myself and the guest,” Hayes said.

They plan to continue producing weekly podcast episodes as long as the interest remains. Future topics could include the Latin Mass, international news including the situation in Ukraine, ecumenical topics and more.