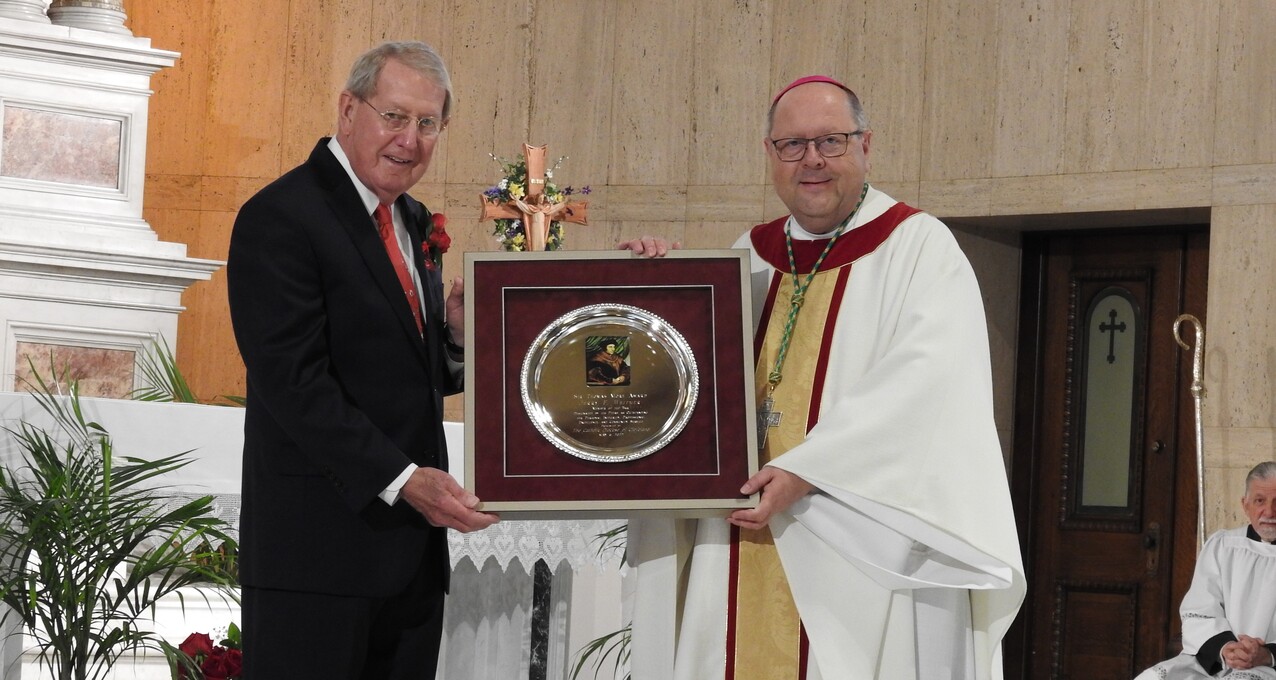 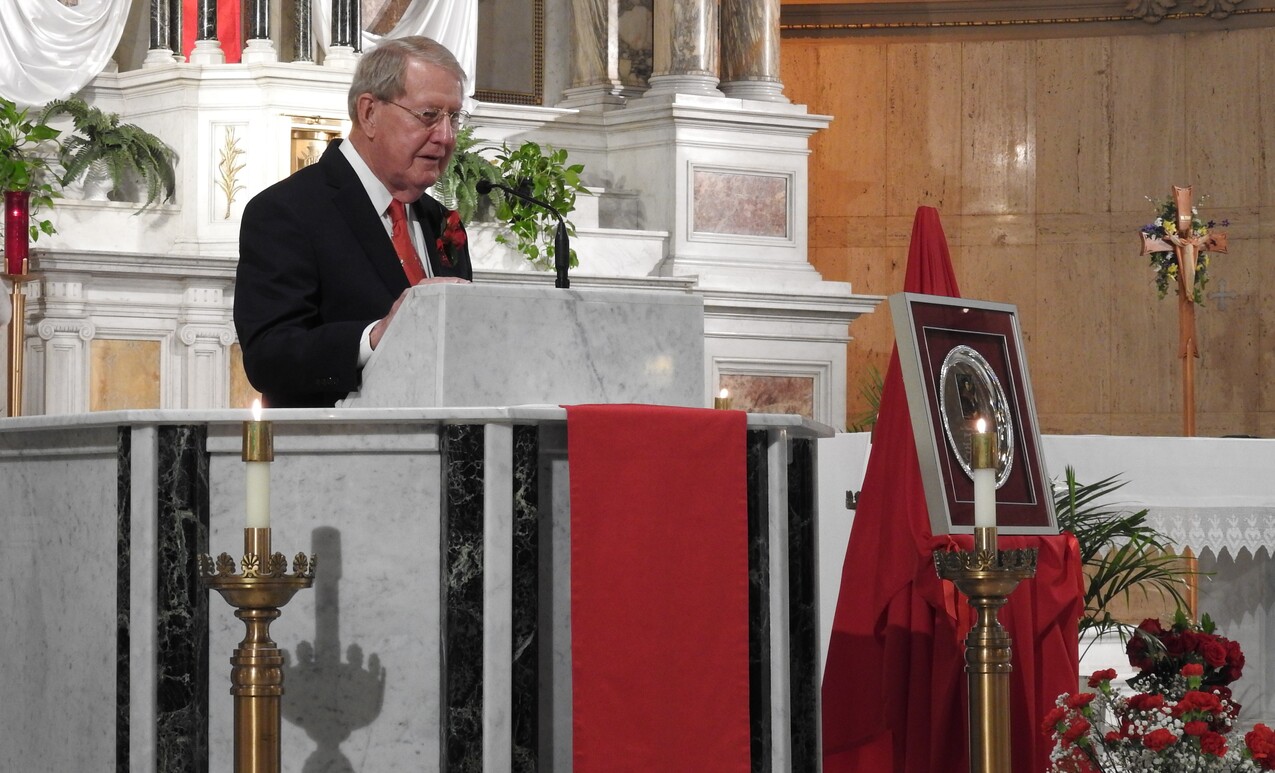 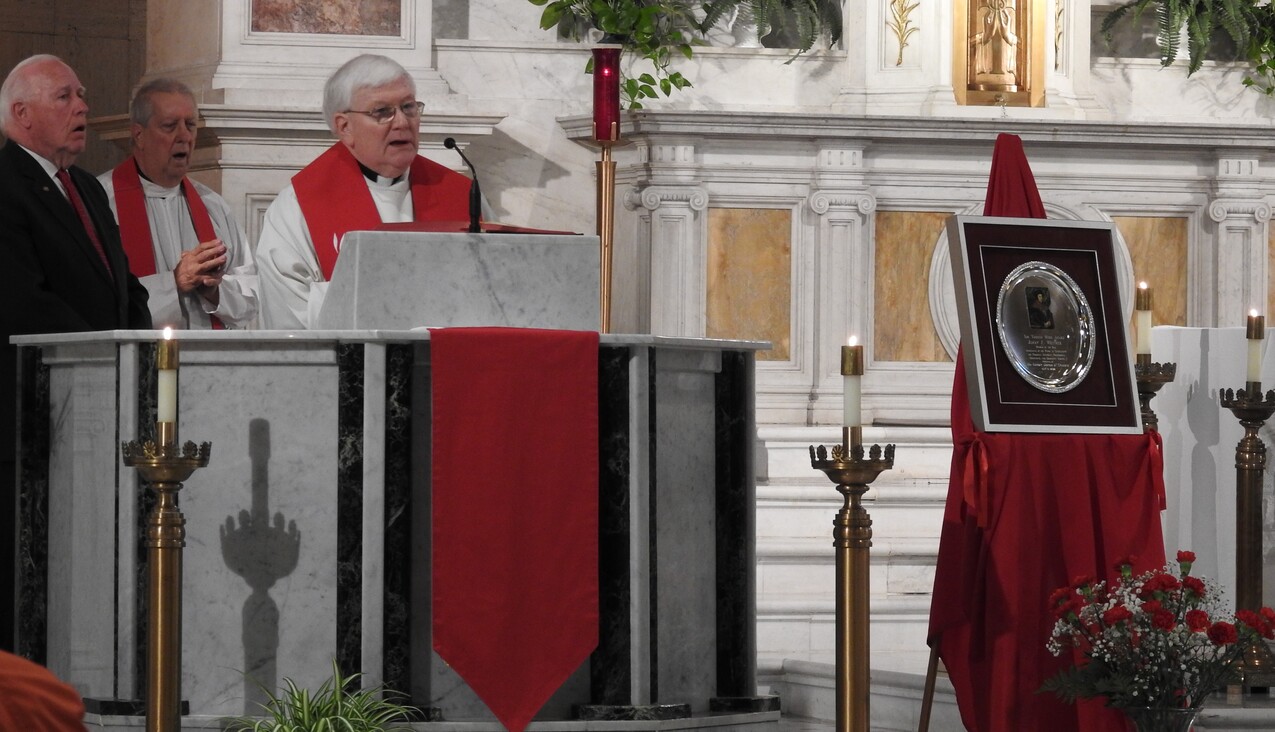 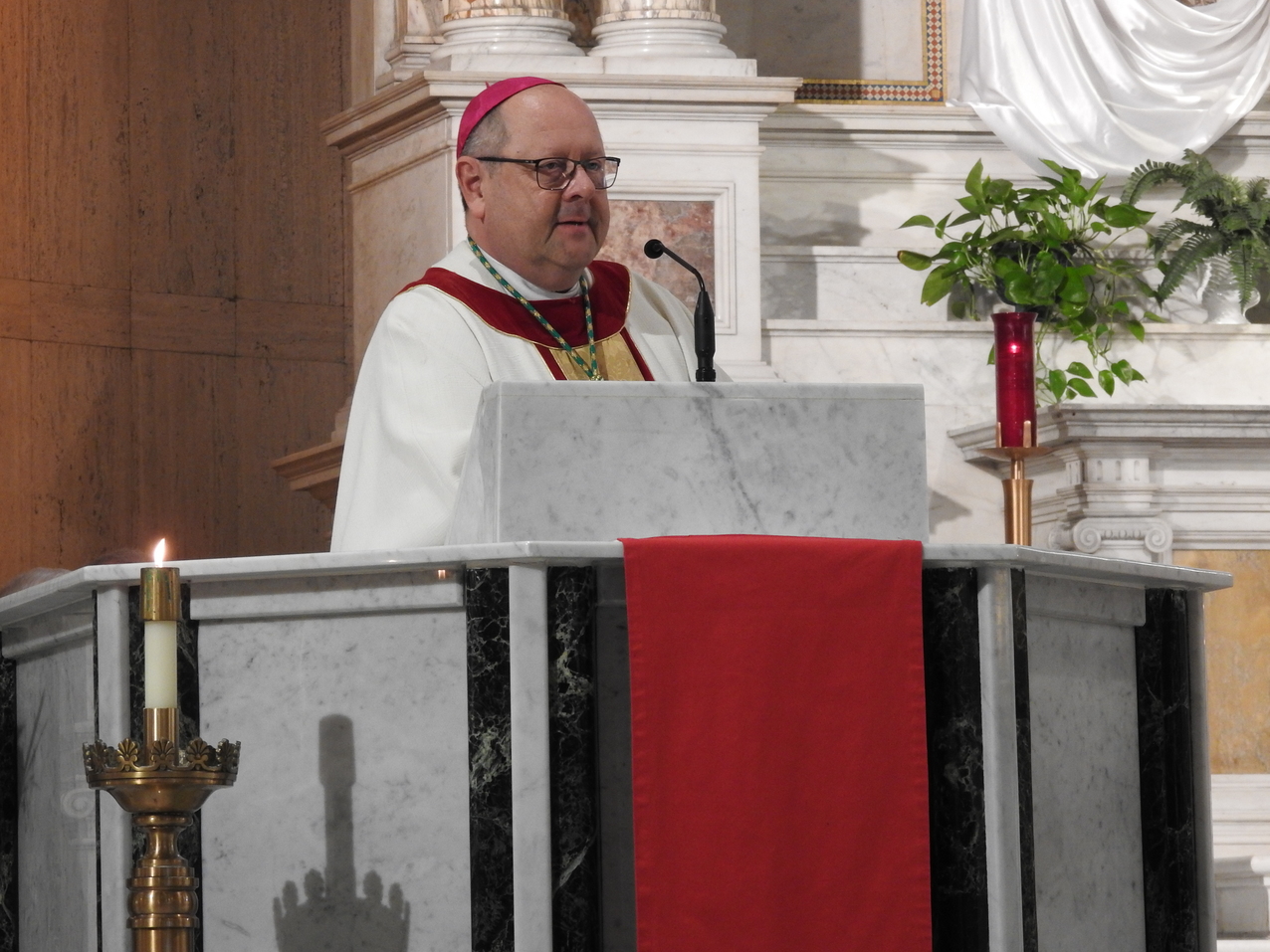 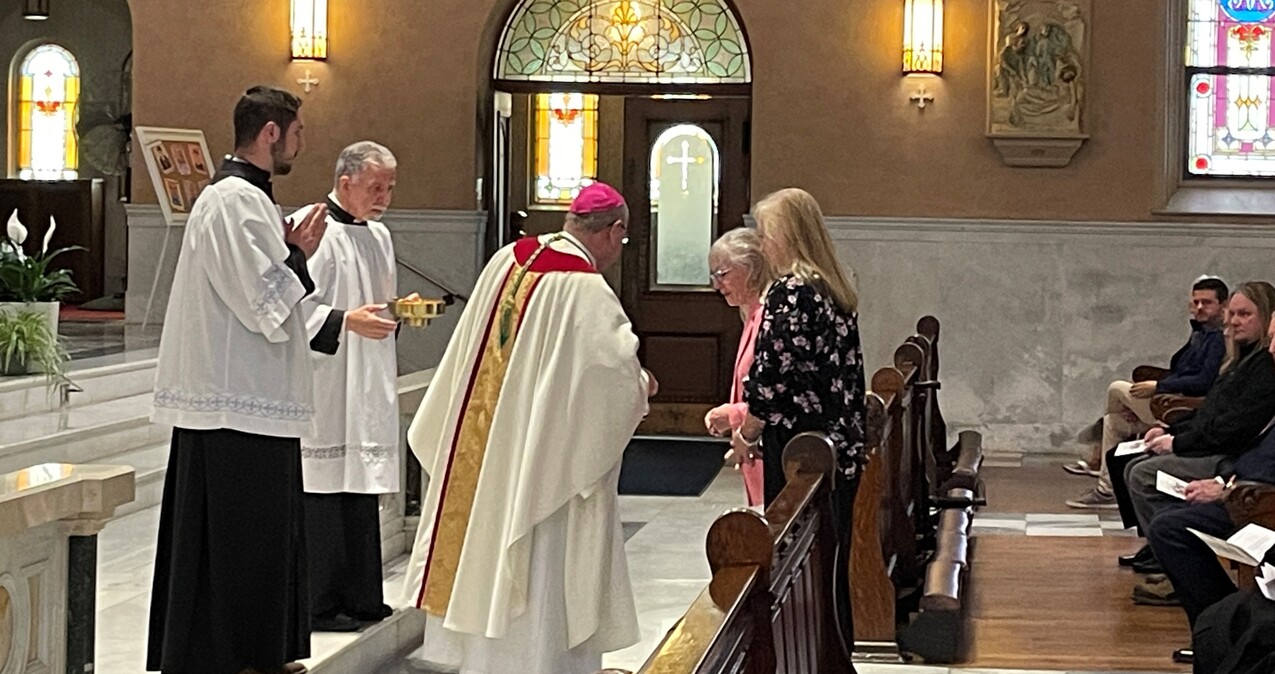 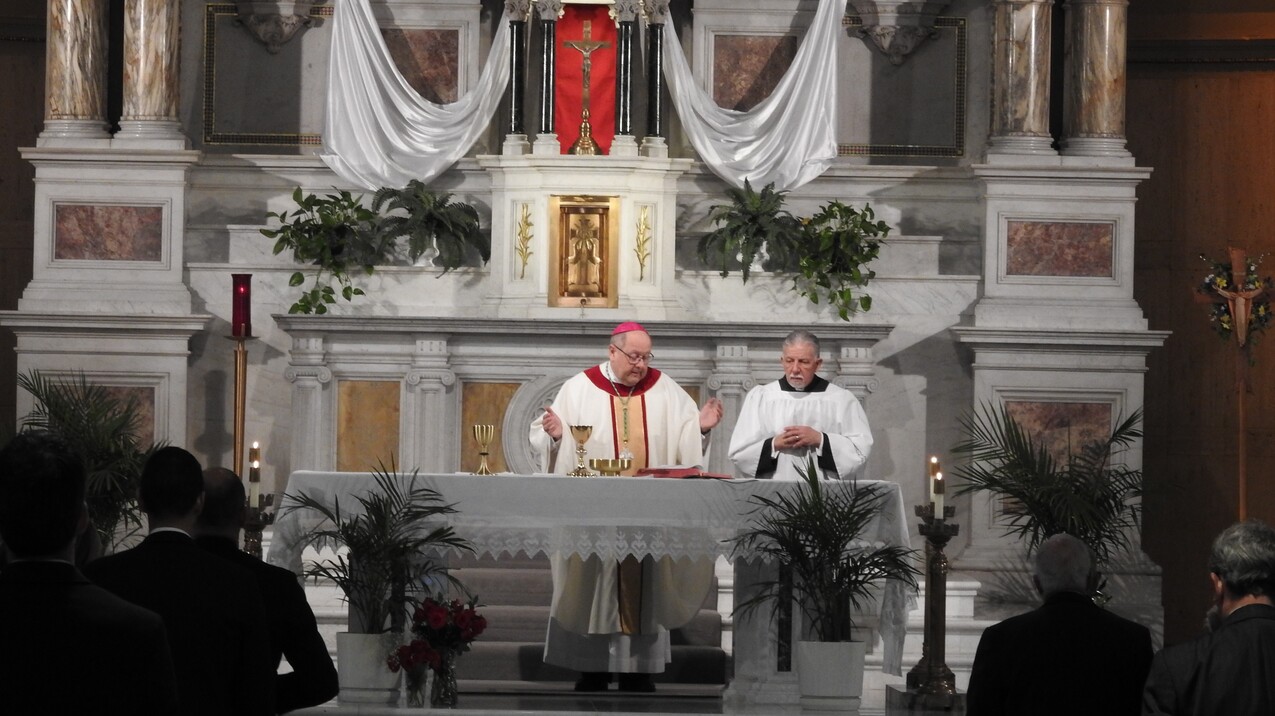 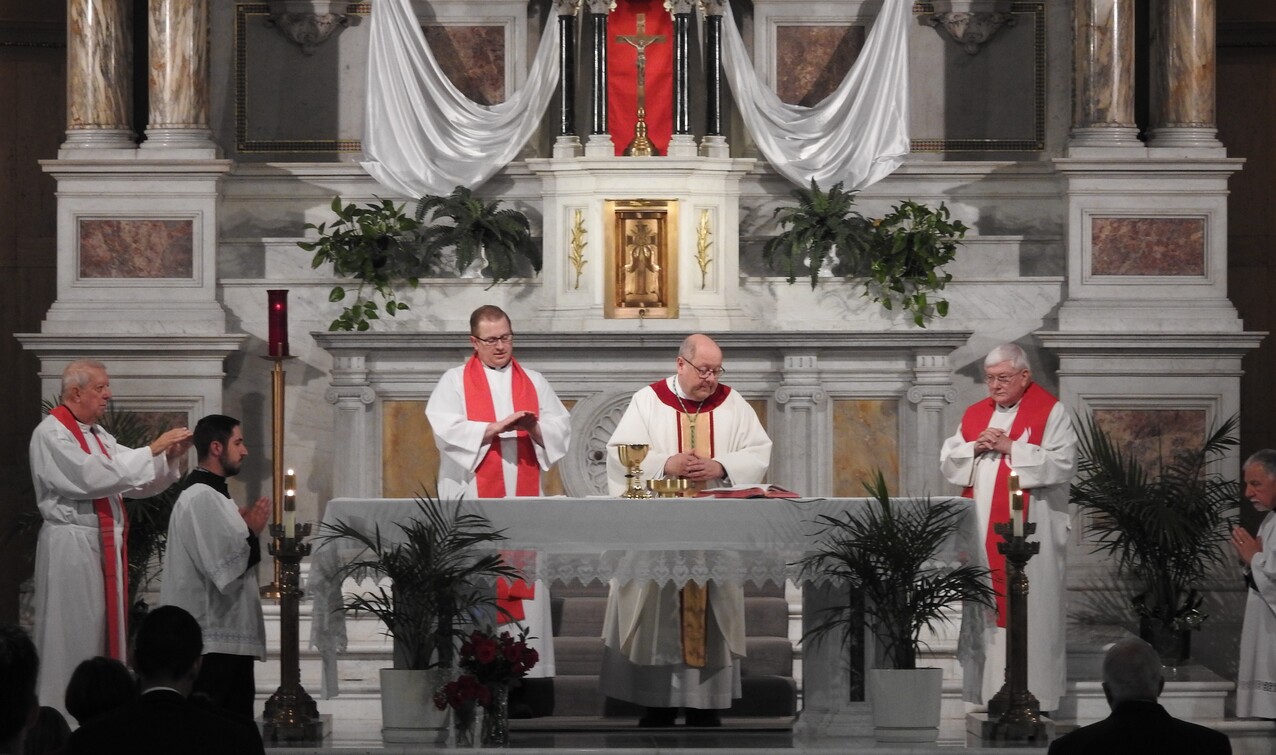 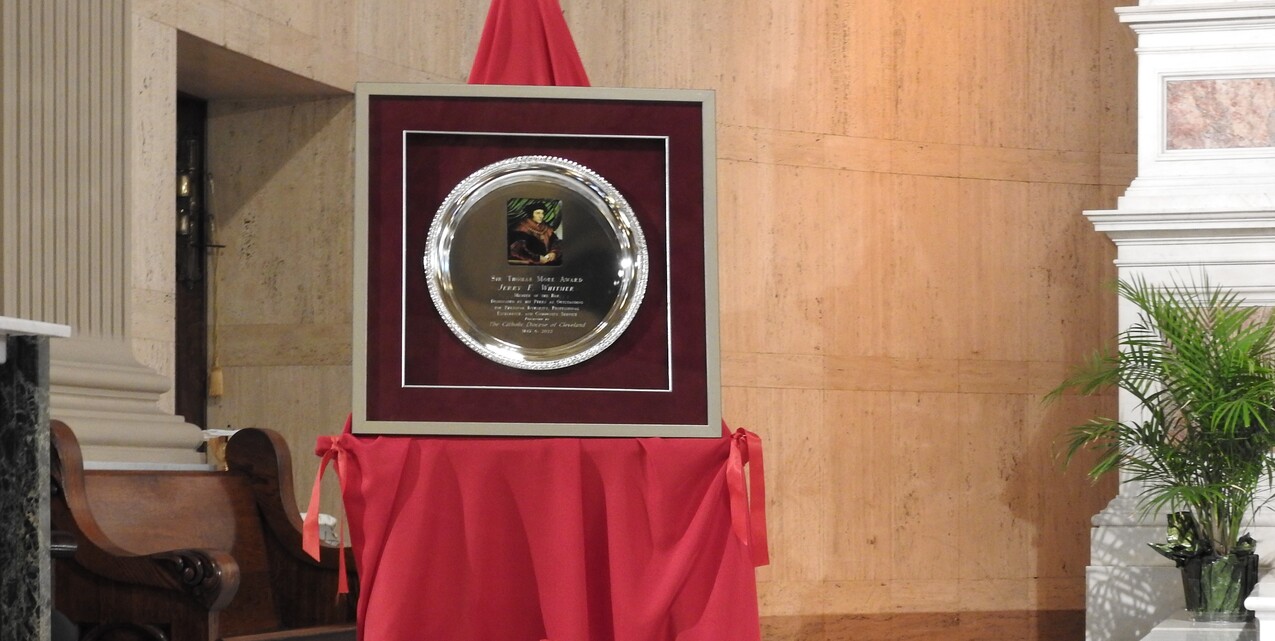 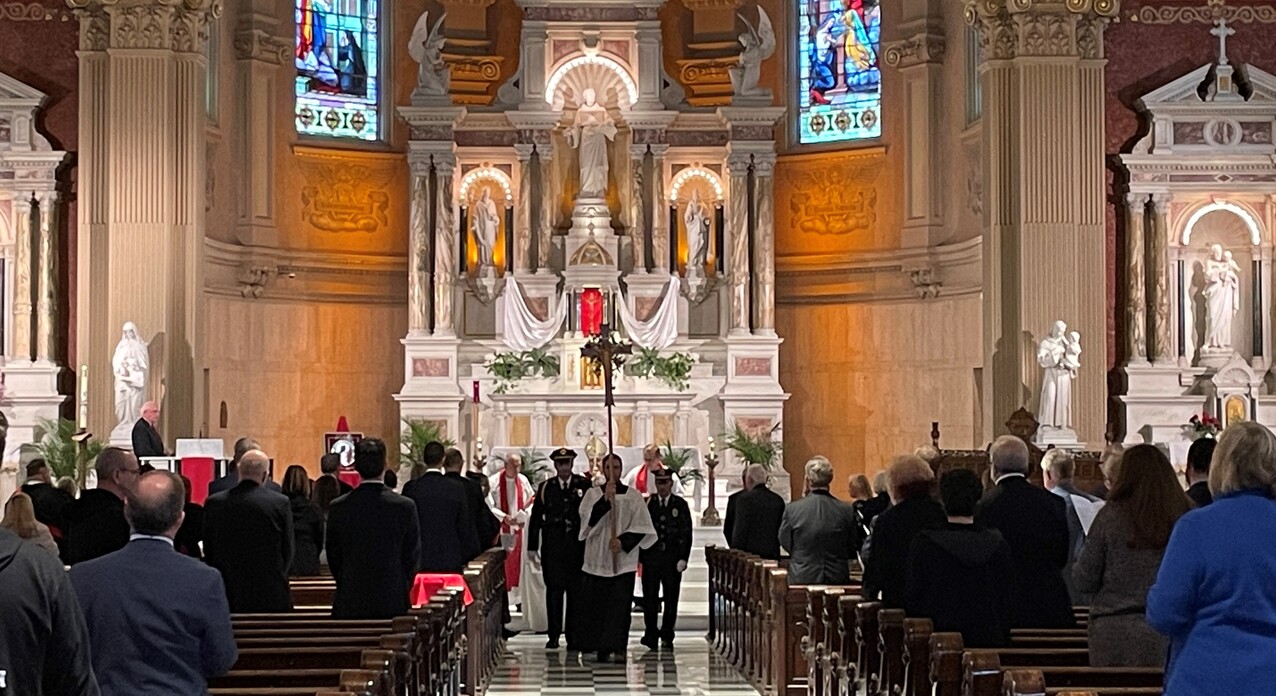 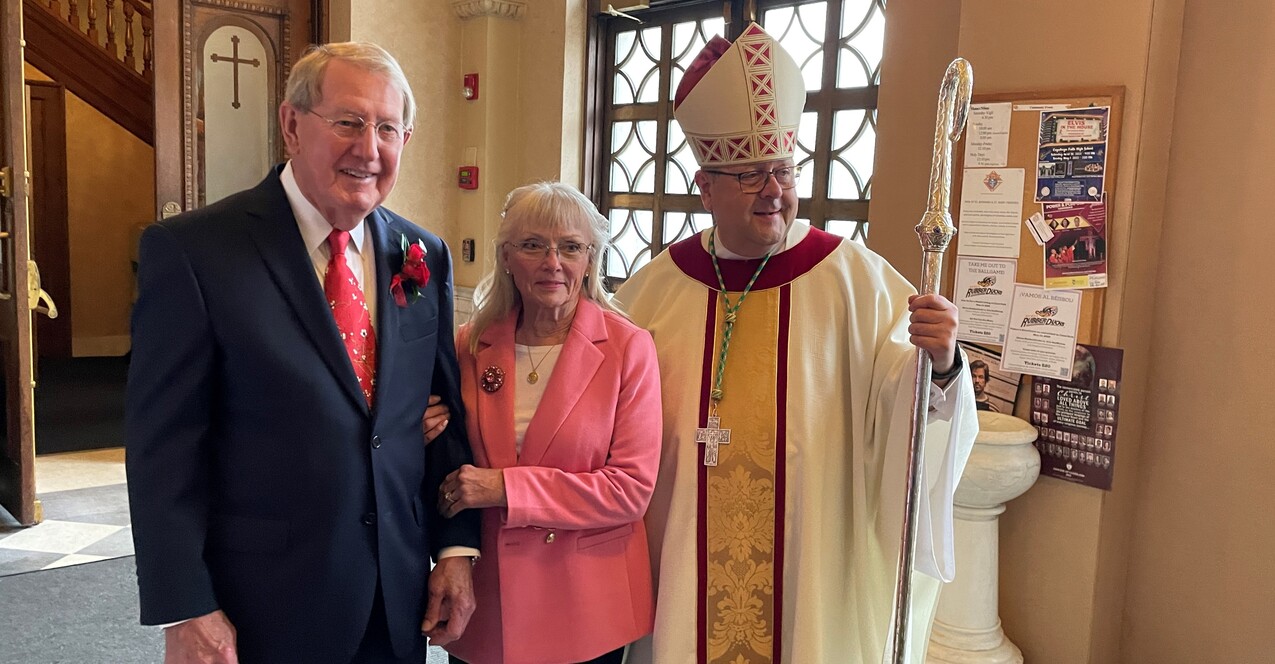 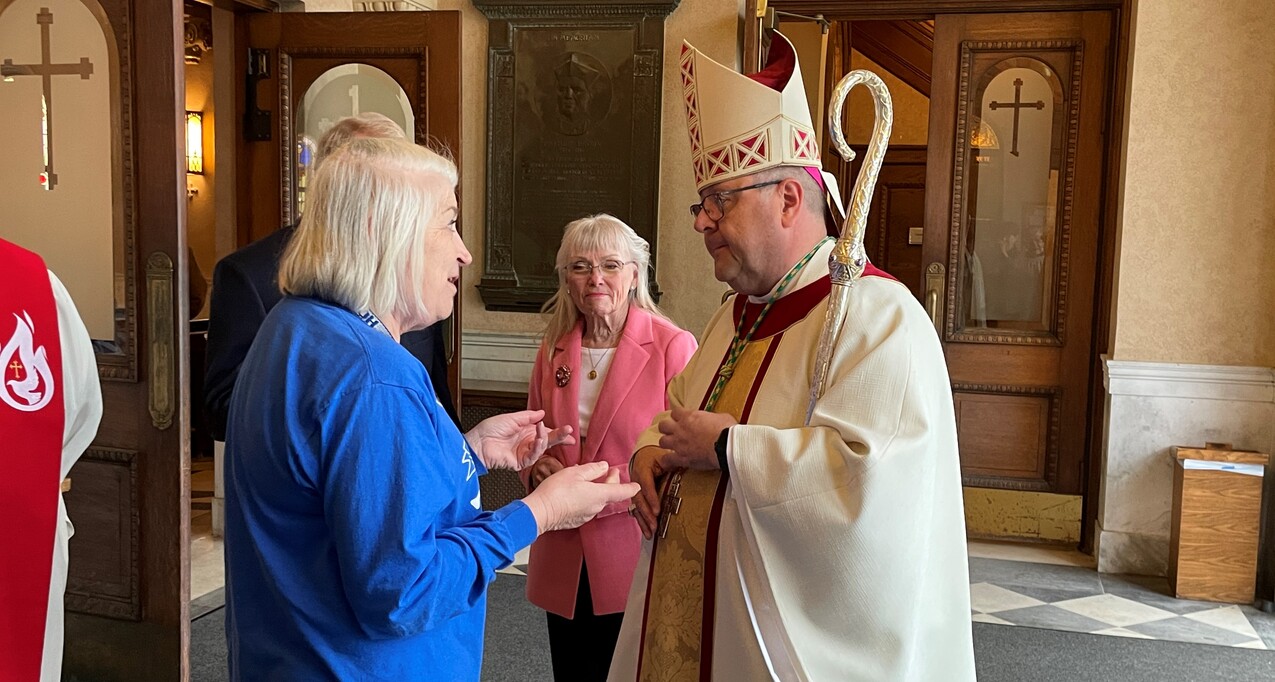 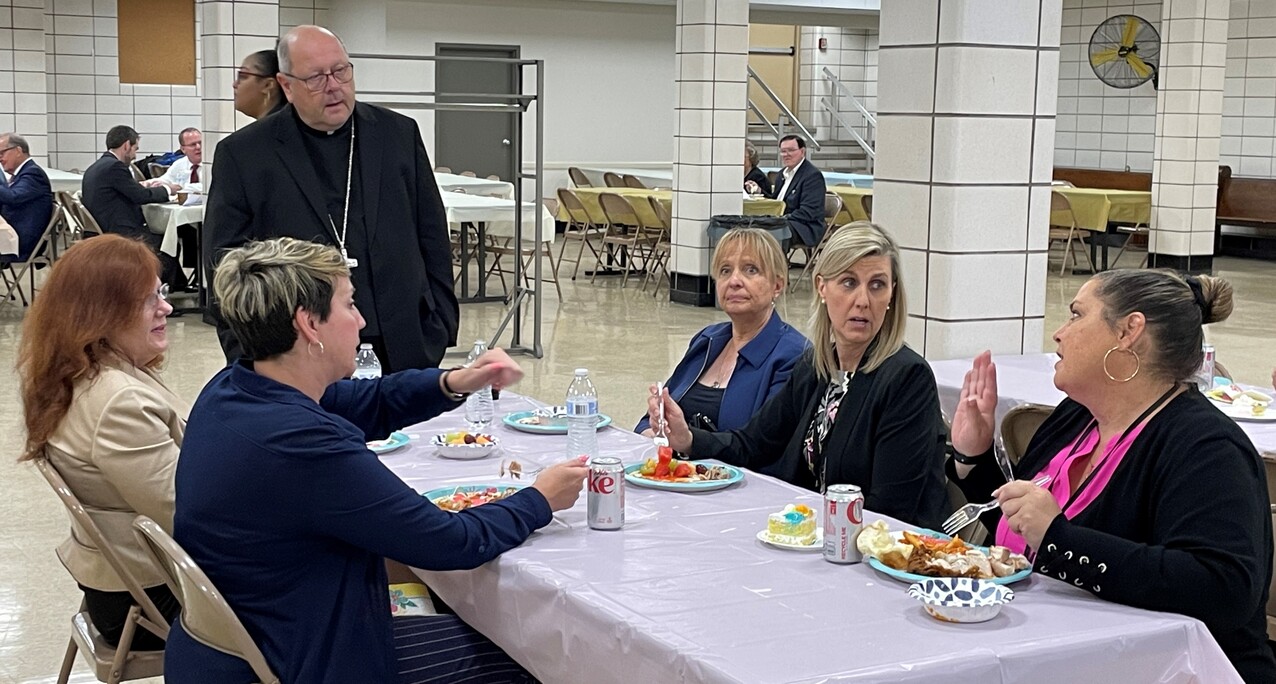 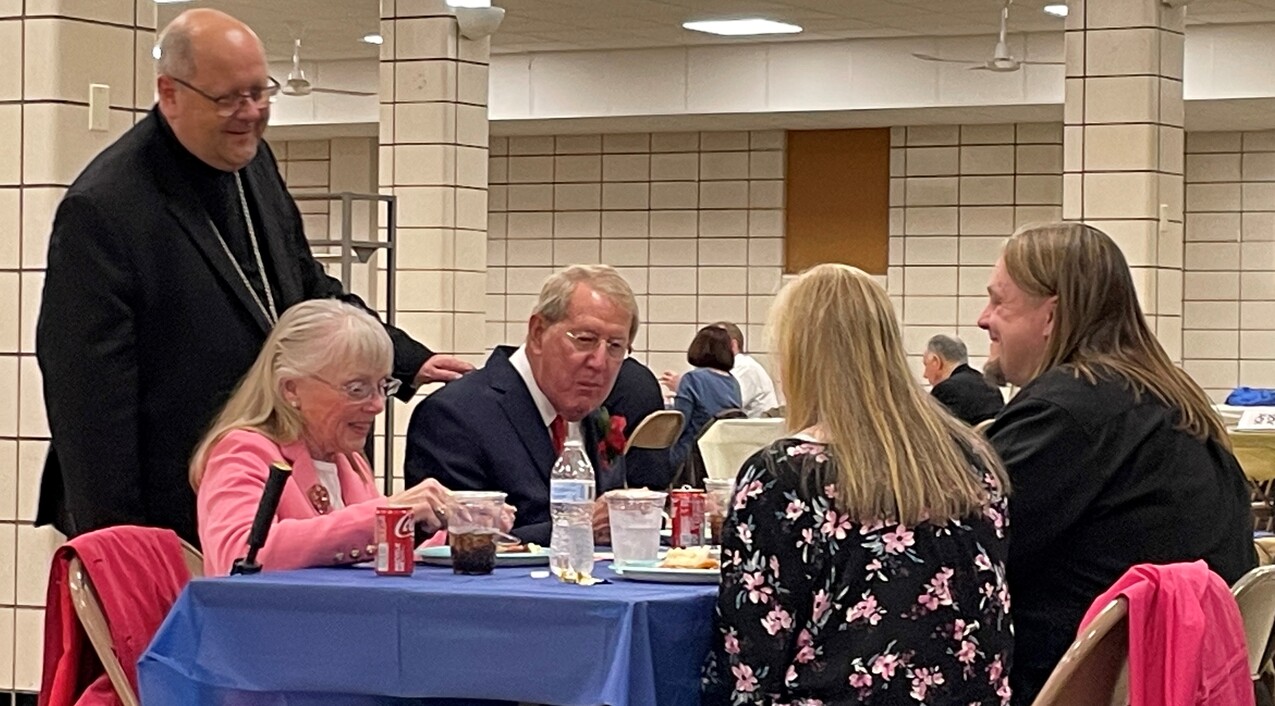 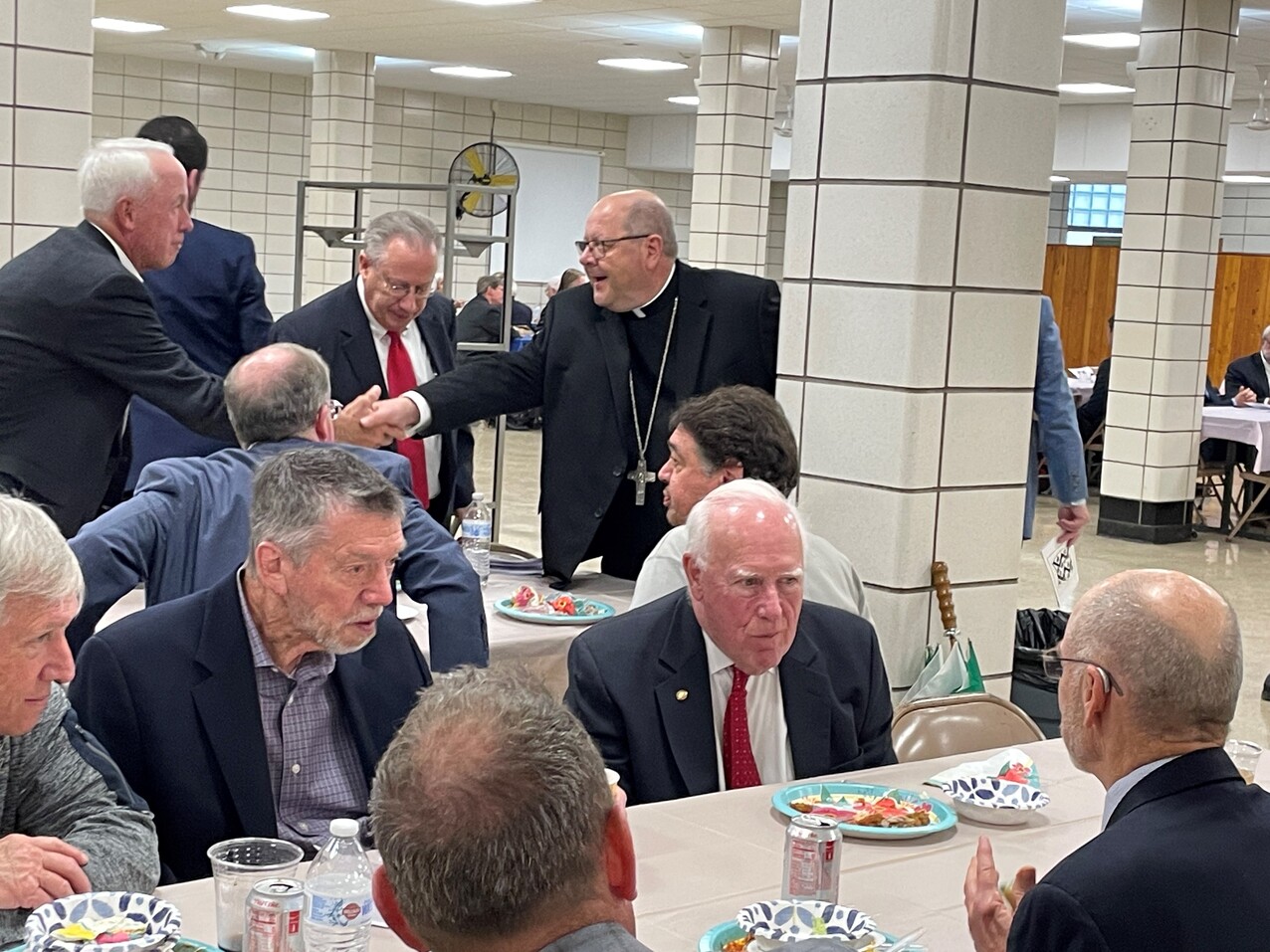 The Akron Bar Association continued its annual tradition of hosting the Red Mass during Law Week, which is celebrated the first week in May. It is an ancient tradition in the legal profession dating back more than seven centuries when the Roman Rota, a judicial office of the papal administration, instituted the custom of seeking God’s assistance for the work of the courts and members of the legal profession.

In England, the Red Mass can be traced to the reign of King Edward I, who died in 1307. Since its inception, it was the custom of the entire bench and bar to attend the Mass in Westminster Palace and later Westminister Abbey. The celebrant wore red vestments and the judges wore scarlet, which is how the name of the celebration was derived.

Judges serving in Summit County were invited to wear their black judicial robes and a red sash and to process into and out of the church before and after Mass. Members of the bar and other legal professions also attended the liturgy and the Akron Police Department provided an honor guard.

The bishop asked those gathered for the Mass if they have a heart for the gifts given to them. He reflected on his recent trip to the Diocese of Cleveland’s mission in El Salvador, noting the extreme poverty and the simplicity of life. One of the highlights of his visit was celebrating Mass at the site where four churchwomen, including two from the Cleveland Diocese – Ursuline Sister Dorothy Kazel and lay missionary Jean Donovan – were murdered in 1981 during the Salvadoran civil war. The bishop said the diocese still staffs two parishes there.

He recalled meeting a multigenerational family who lived in a small, two- or three-room cinderblock home built on the side of a mountain. “The kitchen was outside and there were chickens running around, but they were so proud of their home,” he said. “They were thrilled they could afford electricity because one of the family members was working and could pay for it,” he said. We take so much for granted, the bishop said, noting we may complain if the power or internet goes out even briefly yet many people in El Salvador don’t have these luxuries.

“We could learn from them,” he said. “They are a grateful people and are full of pride.”

Reflecting on the day’s readings, he said the Israelites complained about the food -- manna – that God had provided for them because they were tired of eating it every day.

“Jesus gives us food for eternal life – his body and blood – in the unbloody sacrifice of the Mass,” the bishop said, as we prepare for our journey to eternity. This is possible because God so loved the world that he gave us his only Son who died to make us free, he added.

“If we can believe that the second person of the Trinity – Jesus – walked among us, is it such a stretch to believe that he gives us his resurrected body in the Eucharist as food for eternal life?” he asked.

St. Paul (Saul) didn’t accept the gifts of the Church until a miracle took place, Bishop Malesic said, referring to Paul being blinded by a light from heaven. Three days later, his vision was restored miraculously by a laying on of hands – and then he became a believer.

“We are blessed to have the faith that was passed on by Peter, the rock upon which Jesus built his Church. All of us will take Jesus from this alter to our families, our jobs, our lives. We cannot divorce Jesus from our lives,” the bishop said. “We need to bring life to this world. People of faith should not bring darkness, but rather light and hope. Accept the gift of God and use it for the good of others.”

Before the final blessing, Father Rosing introduced Jerry Whitmer, recipient of the 2022 St. Thomas More Award. The award recognizes the virtues of integrity and public service that reflect those of St. Thomas More, who refused to compromise his beliefs and was executed.

The St. Thomas More Award was instituted by Cleveland Auxiliary Bishop Michael Murphy in 1978 and is presented annually as part of the Summit County Law Week celebration in recognition of the virtues of integrity and public service that reflect those of Thomas More, 1478-1535 He is the patron saint of adopted children, lawyers, civil servants, politicians and difficult marriages.

A native of Wauseon, Ohio, Whitmer graduated from Kent State University and Case Western Reserve University School of Law. He worked at several Akron area law firms and was a partner with the firm that evolved into Brouse McDowell. He served in various capacities with the firm, ultimately spending six years as managing partner.

Whitmer is active with the Akron Bar Association and served as president in 1990. He guided the association through the purchase of the Akron Legal News. Whitmer has received numerous awards and honors during his career.

“Thank you for this great honor,” he said. “It was a privilege to practice law with Brouse McDonnell and others over the years. It is unusual to hear my name connected to St. Thomas More,” he noted.

The bishop thanked members of the legal profession for allowing themselves to use their minds for good and to rise above the fray.

“I believe in the goodness of the law and that God is the ultimate law giver,” he said, reminding them of the importance of placing others above themselves. He also congratulated Whitmer and Father Rosing., who will be retiring soon as pastor of Holy Family Parish.

A lunch sponsored by Brouse McDowell was served in the church hall after Mass.