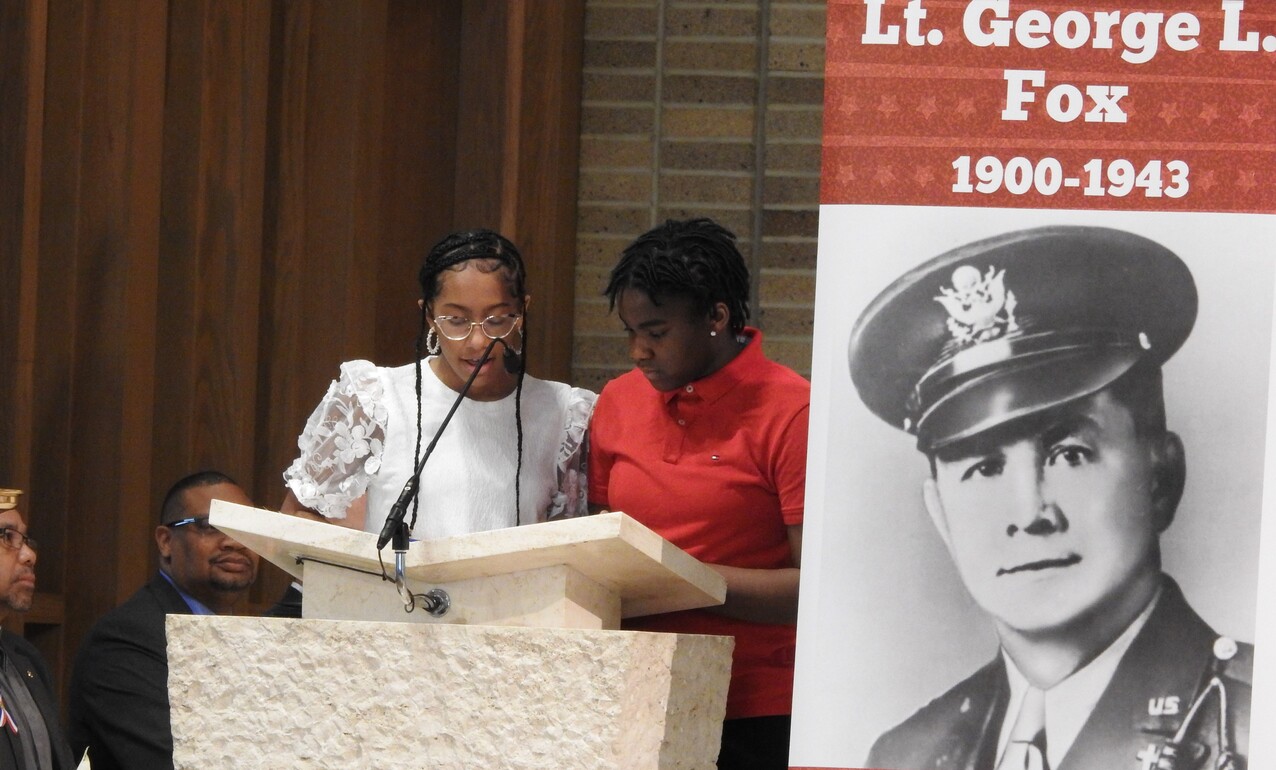 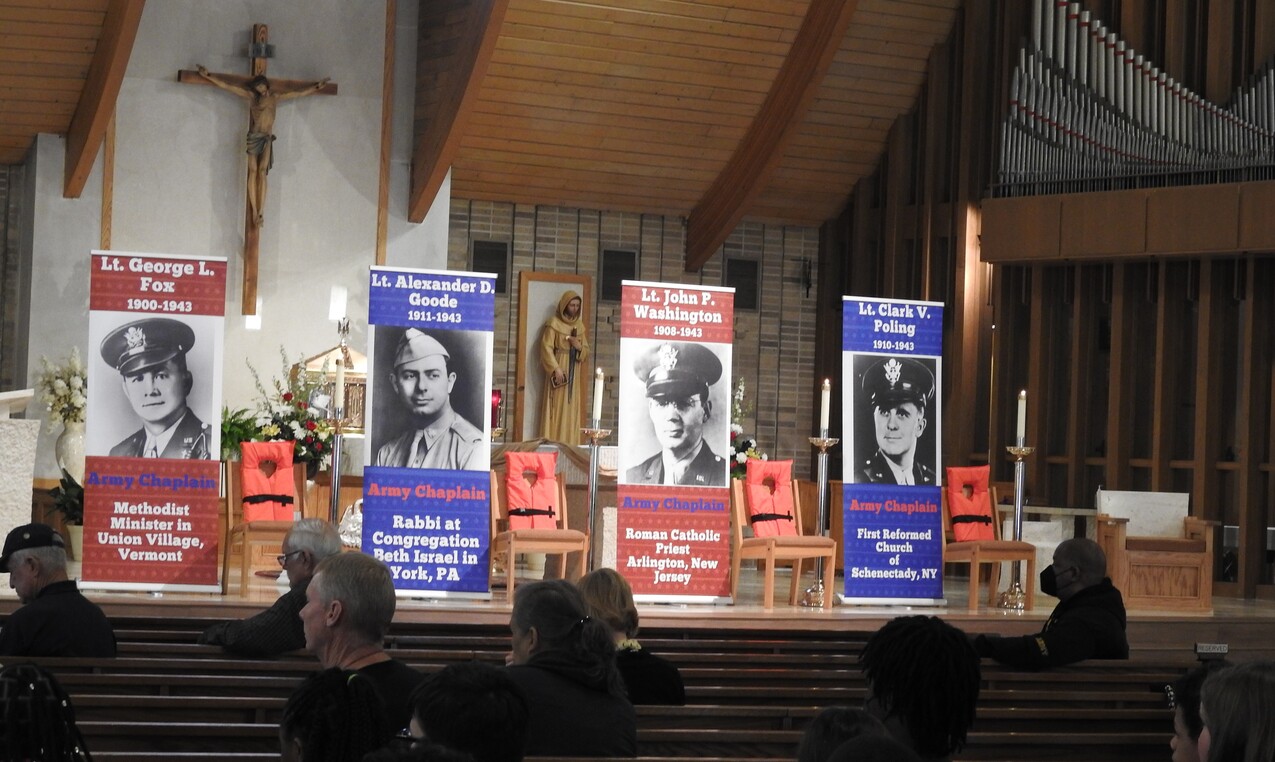 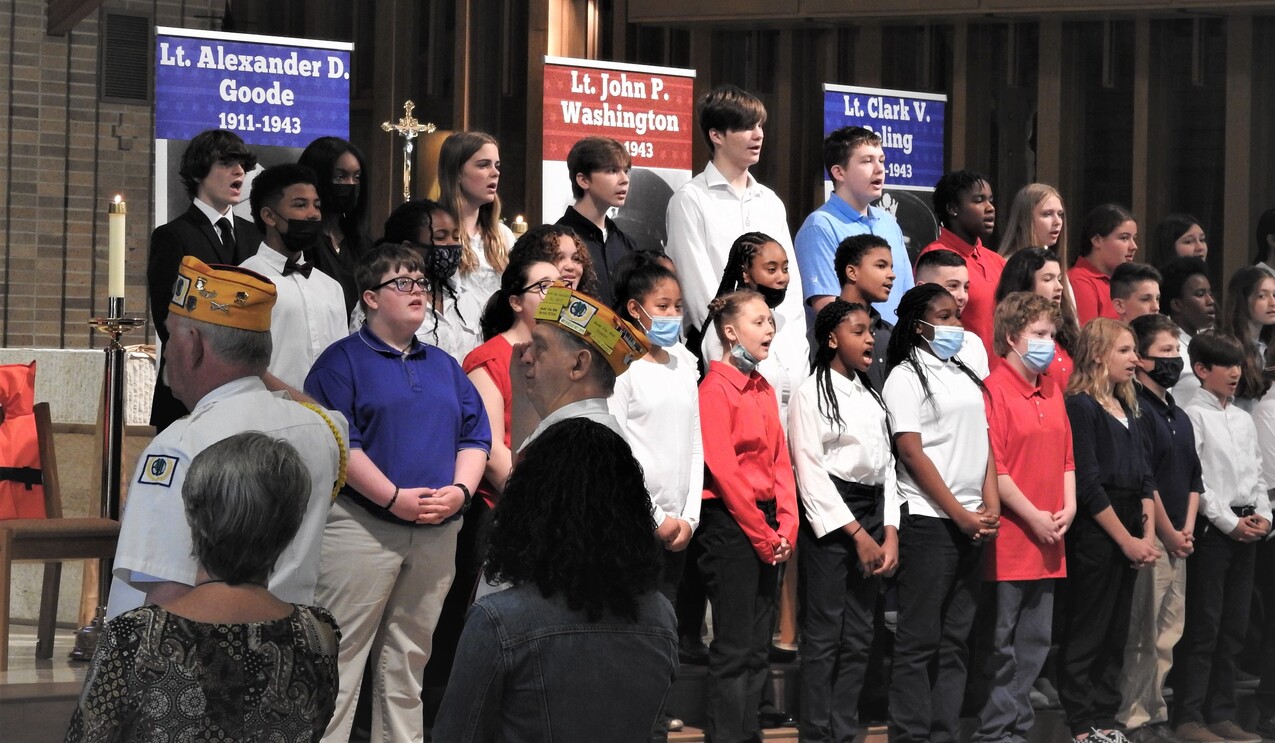 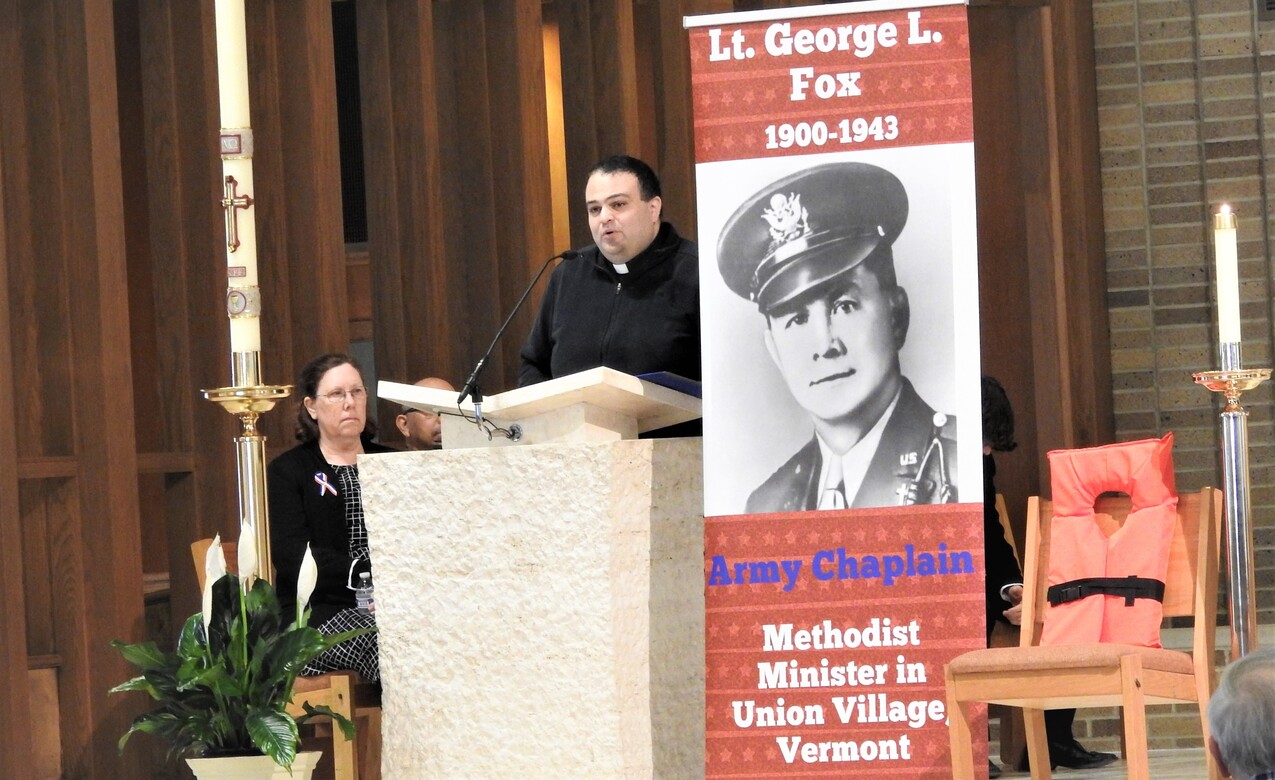 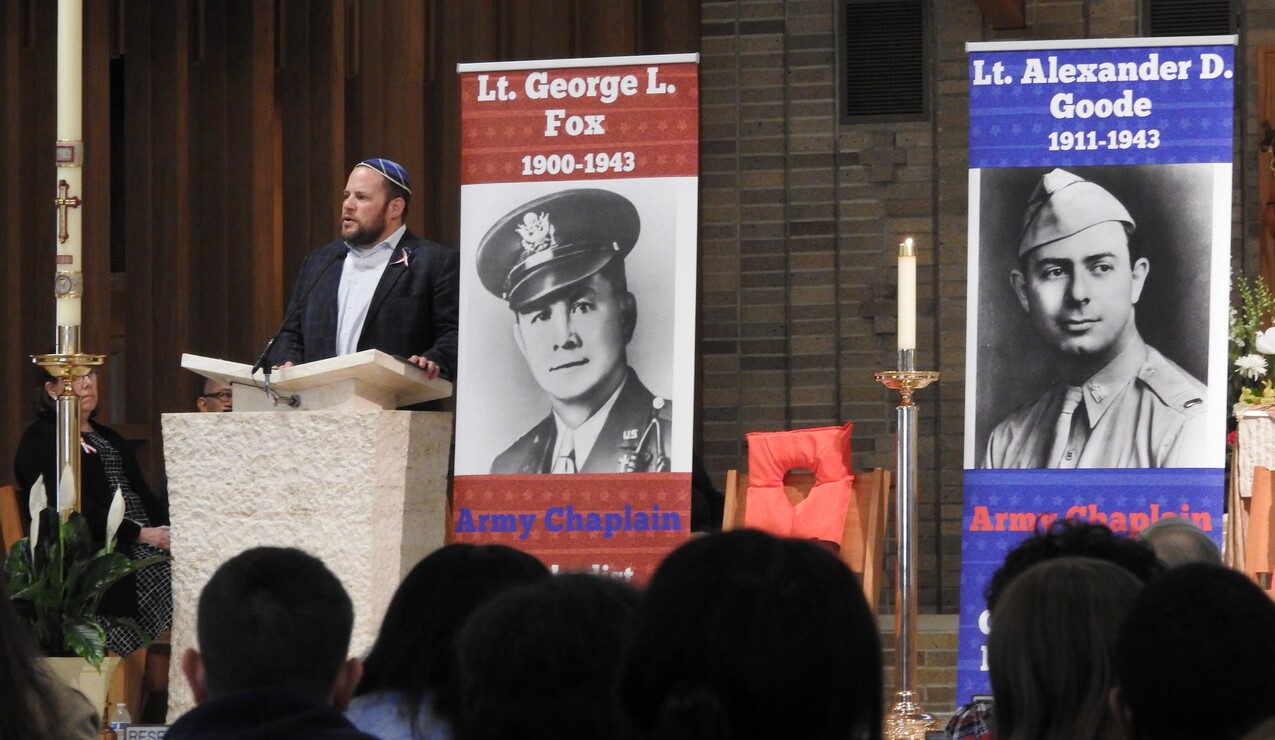 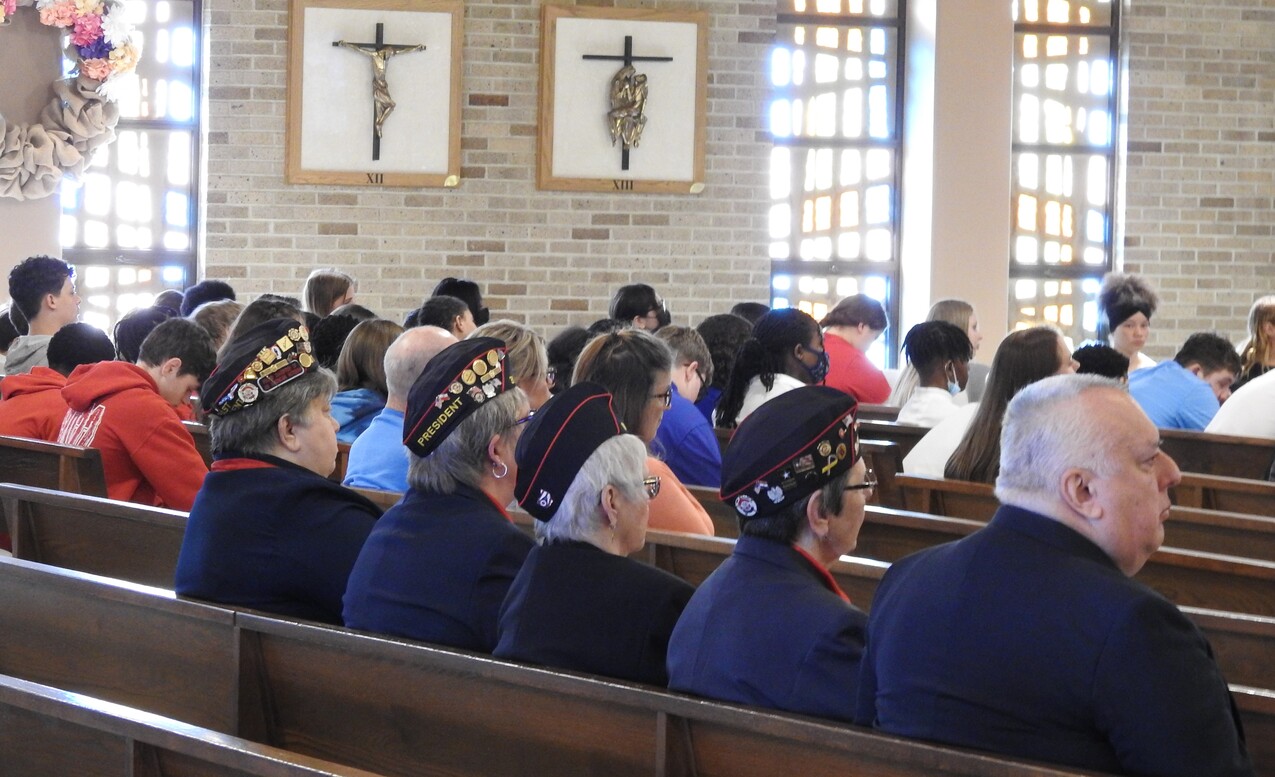 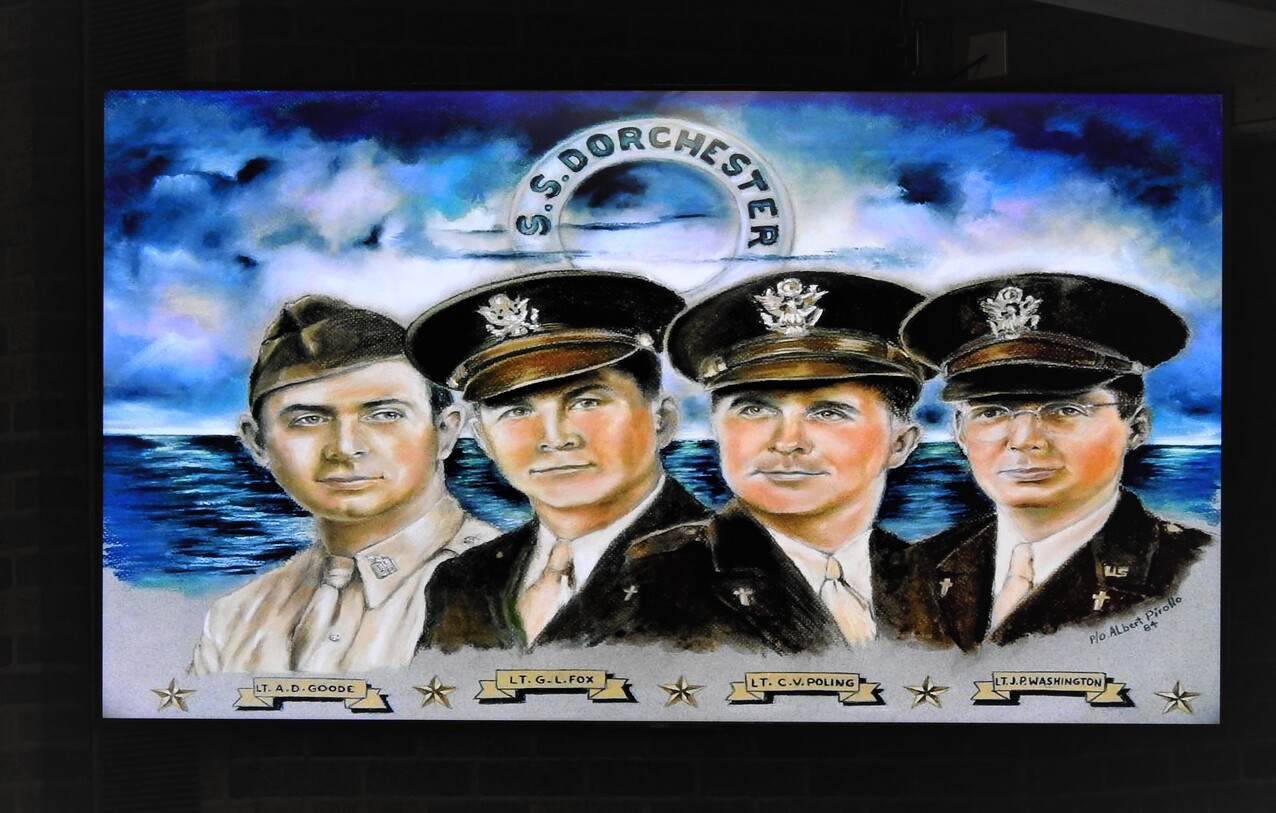 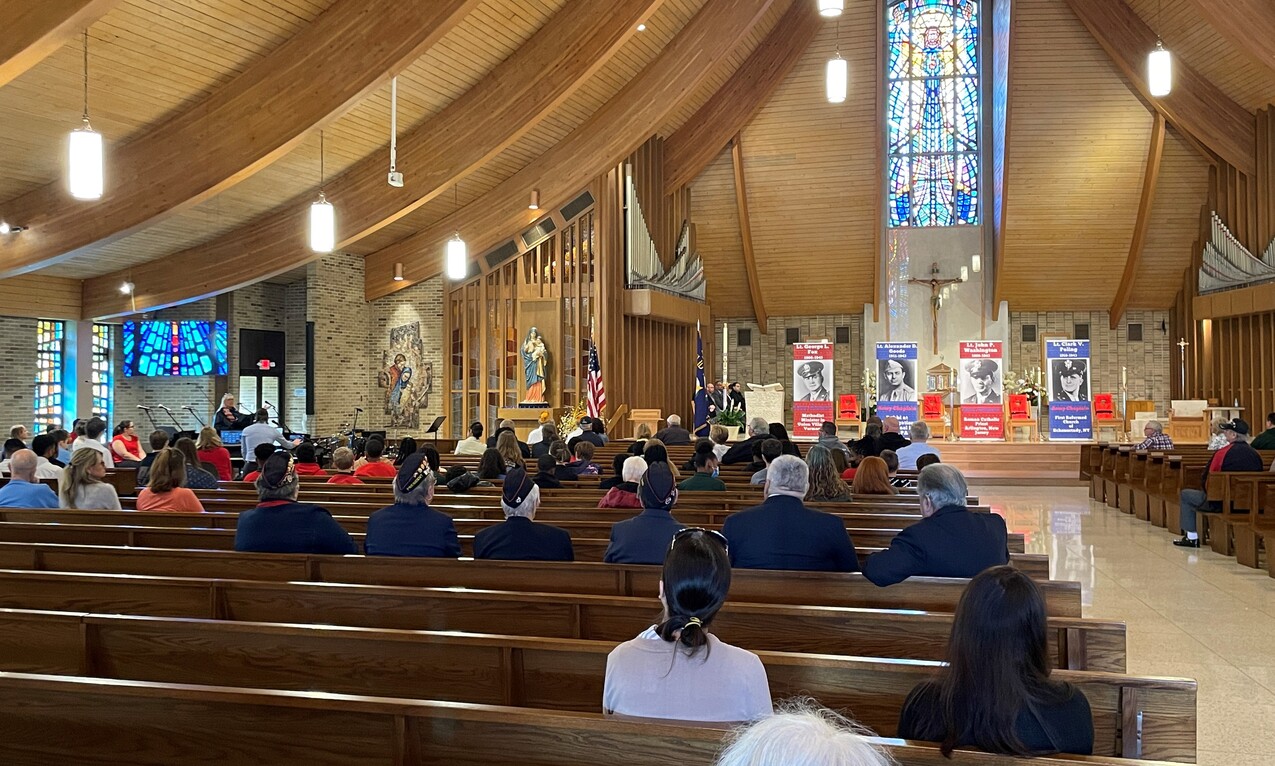 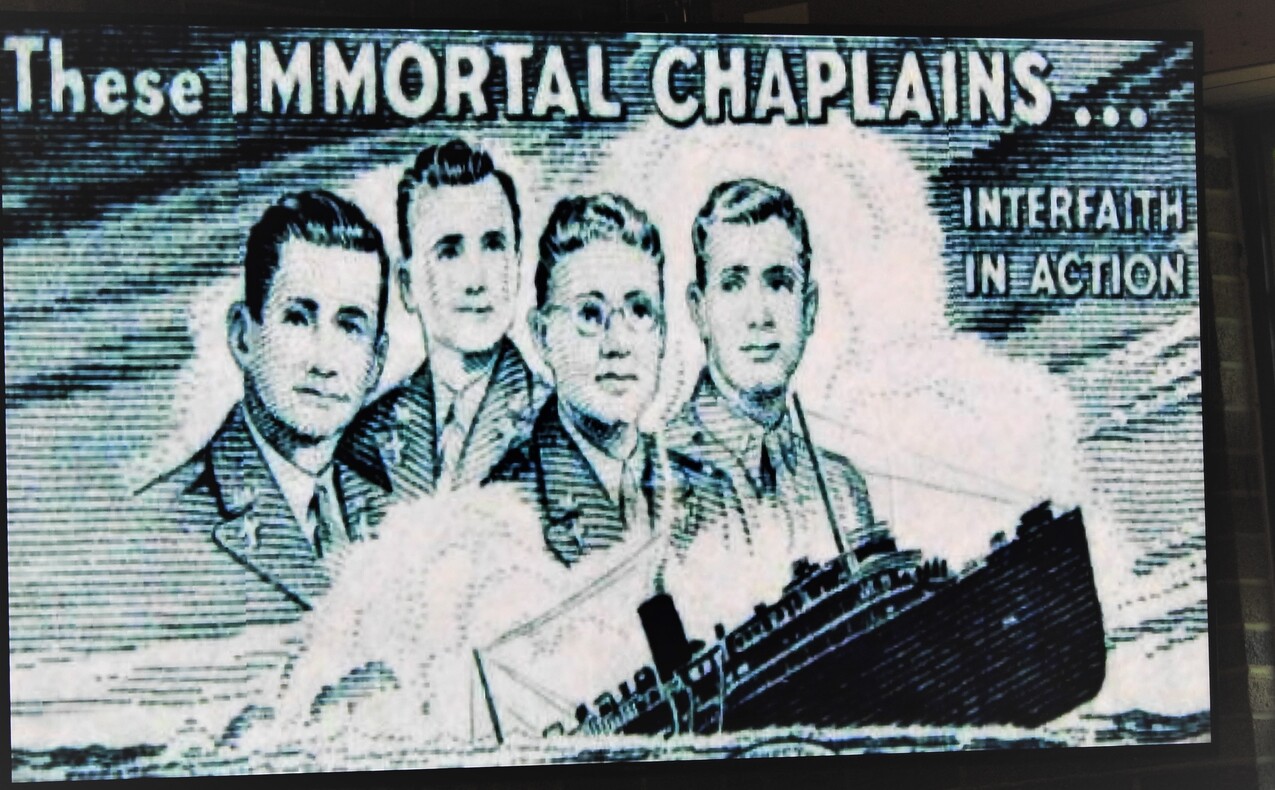 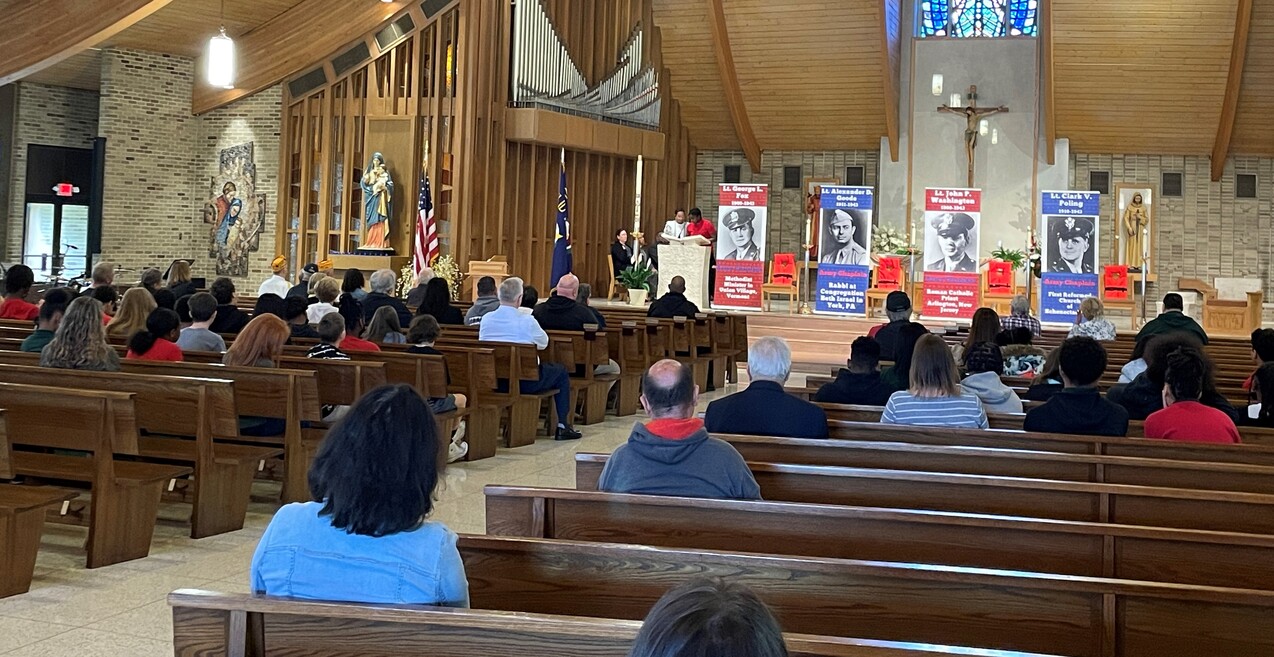 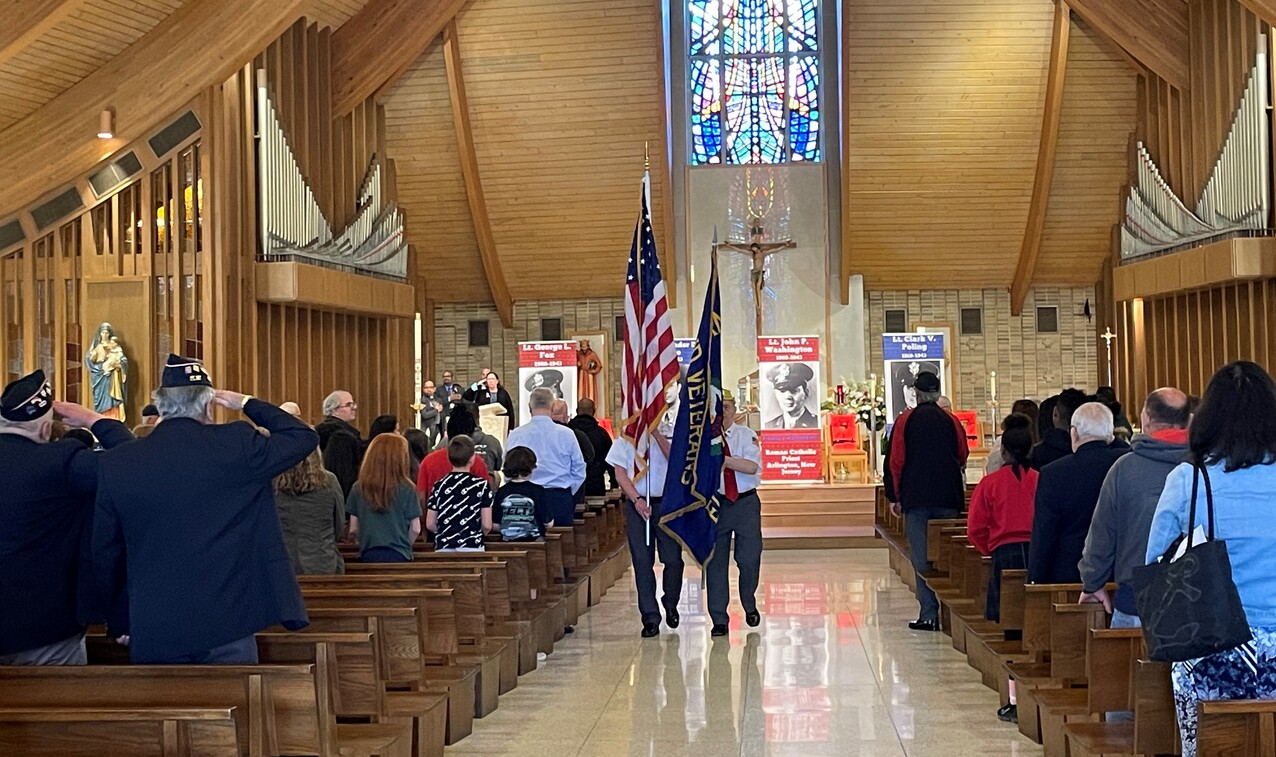 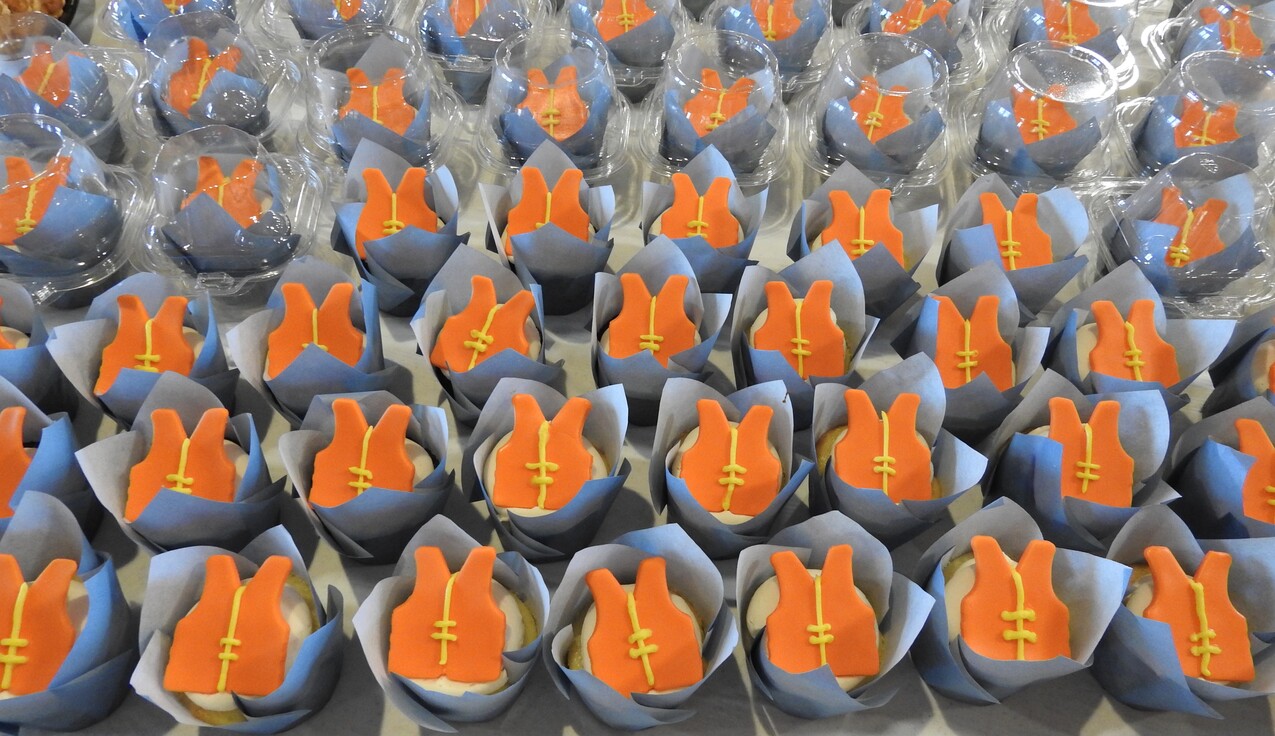 After a winter storm forced postponement of the scheduled Four Chaplains Day ceremony at SS. Robert & William School in Euclid, the event was rescheduled for May 5.

Father John Betters, parish pastor, noted the date was chosen because it was the National Day of Prayer and seemed a fitting substitute.

The ceremony took place in the church. Four large banners, each bearing the name, photo and religious affiliation of a chaplain, were displayed in front of the church. Next to each banner was a chair with a life jacket, a somber reminder of the sacrifice made by the chaplains.

The chaplains were among 902 service men, merchant seamen and civilian workers aboard the U.S.A.T. Dorchester, a civilian ship that had been converted for use as a military transport vessel. The Dorchester was part of a three-ship convoy that left New York on Jan. 23, 1943, heading to Greenland. It was torpedoed and sunk by a German U-boat in the early hours of Feb. 3, 1943.

The Dorchester’s captain ordered the men to sleep in their clothes the night of Feb. 2 and to keep their life jackets on because sonar on a Coast Guard cutter accompanying the convoy had detected a submarine. Also, U-boats were known to be patrolling the sea lanes. Many men ignored the order because of heat generated by the ship’s engines and it was uncomfortable to sleep in life jackets.

About 12:55 a.m. on Feb. 3, a torpedo struck the Dorchester, causing catastrophic damage and knocking out the electrical system, leaving the ship in the dark.

The chaplains’ paths first crossed in November 1942, when they attended a program for military chaplains at Harvard. A few months later, they were reunited when all four were assigned to travel on the Dorchester.

Each man worked to help calm the frightened service men aboard the sinking ship, guiding them to life boats, helping them find life jackets and even taking off their own life jackets and giving them to others. They also tried to comfort the injured and dying while remaining calm and reassuring.

Of the 902 men aboard the Dorchester, only 230 survived. Before boarding the Dorchester back in January, Lt. Poling had asked his father – who had been a World War I military chaplain -- to pray for him, “Not for my safe return, that wouldn't be fair. Just pray that I shall do my duty ... never be a coward ... and have the strength, courage and understanding of men. Just pray that I shall be adequate.”

As the ship went down, survivors in nearby rafts could see the four chaplains -- arms linked and braced against the slanting deck. Their voices could also be heard offering prayers and singing hymns before they disappeared into the sea. The air temperature was about 36 degrees and the water was a frigid 34 degrees when the ship sank.

The Distinguished Service Cross and Purple Heart were awarded to each chaplain posthumously. Congress wanted to confer the Medal of Honor, but was blocked by the stringent requirement that recipients must perform heroically while under fire. Instead, they posthumously received a Special Medal for Heroism, The Four Chaplains’ Medal. The special, one-time award was authorized by Congress and presented to their relatives by President Dwight Eisenhower on Jan. 18, 1961.

An interfaith, nondenominational Chapel of the Four Chaplains was dedicated Feb. 3, 1951, eight years after their deaths, on the campus of Temple University in Philadelphia, Pennsylvania. In 2001, the chapel was moved to the site of a World War II Navy chapel built in 1942 on the grounds of the former Philadelphia Naval Shipyard.

The chaplains also were honored with the release of a 3-cent postage stamp in 1948.

Martha Dodd, SS. Robert & William principal, made some brief closing remarks and offered a small gift to the speakers. She said the school’s No Place for Hate students helped organize the event.

Military and veterans attending the program received a patriotic ribbon/pin and were invited to a reception afterward, where they could enjoy cookies decorated like life jackets.

Click here for more information on the Four Chaplains.