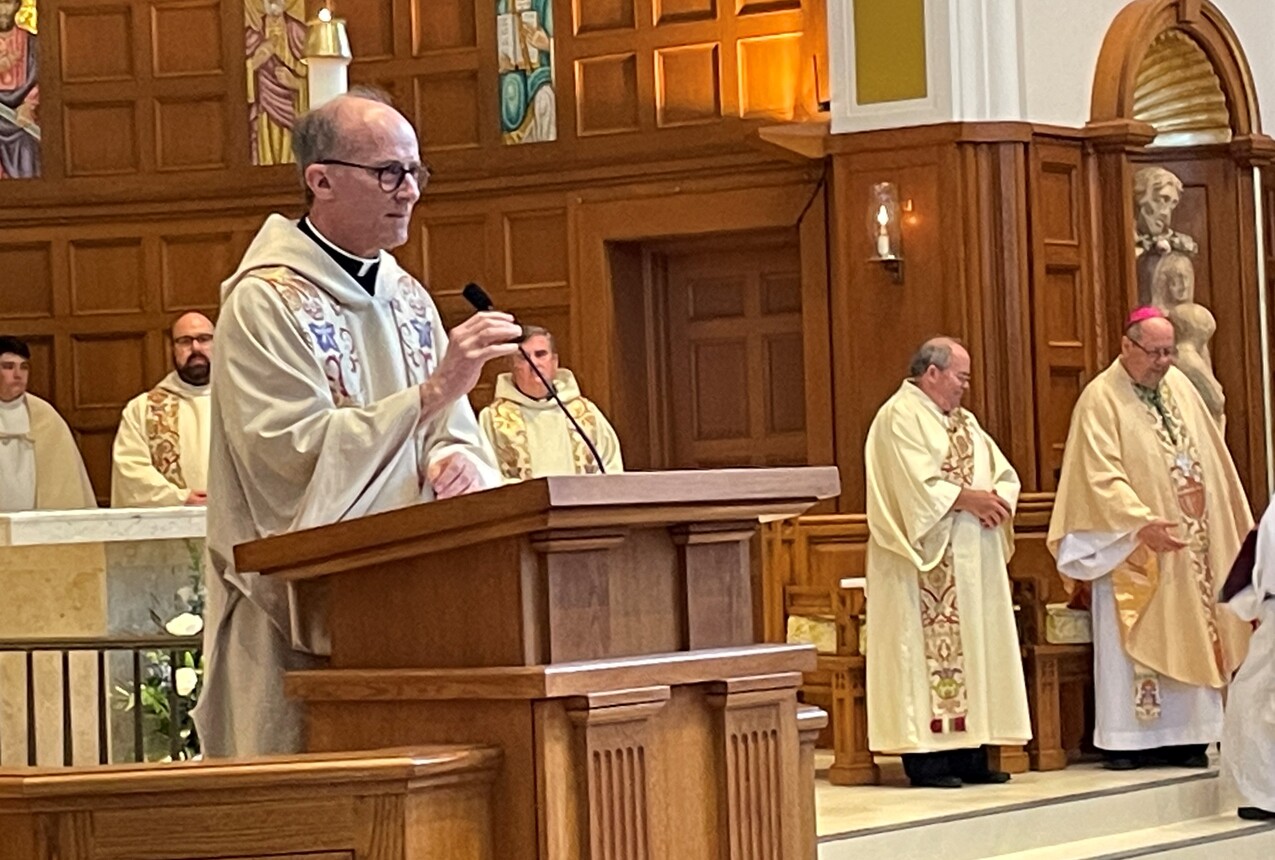 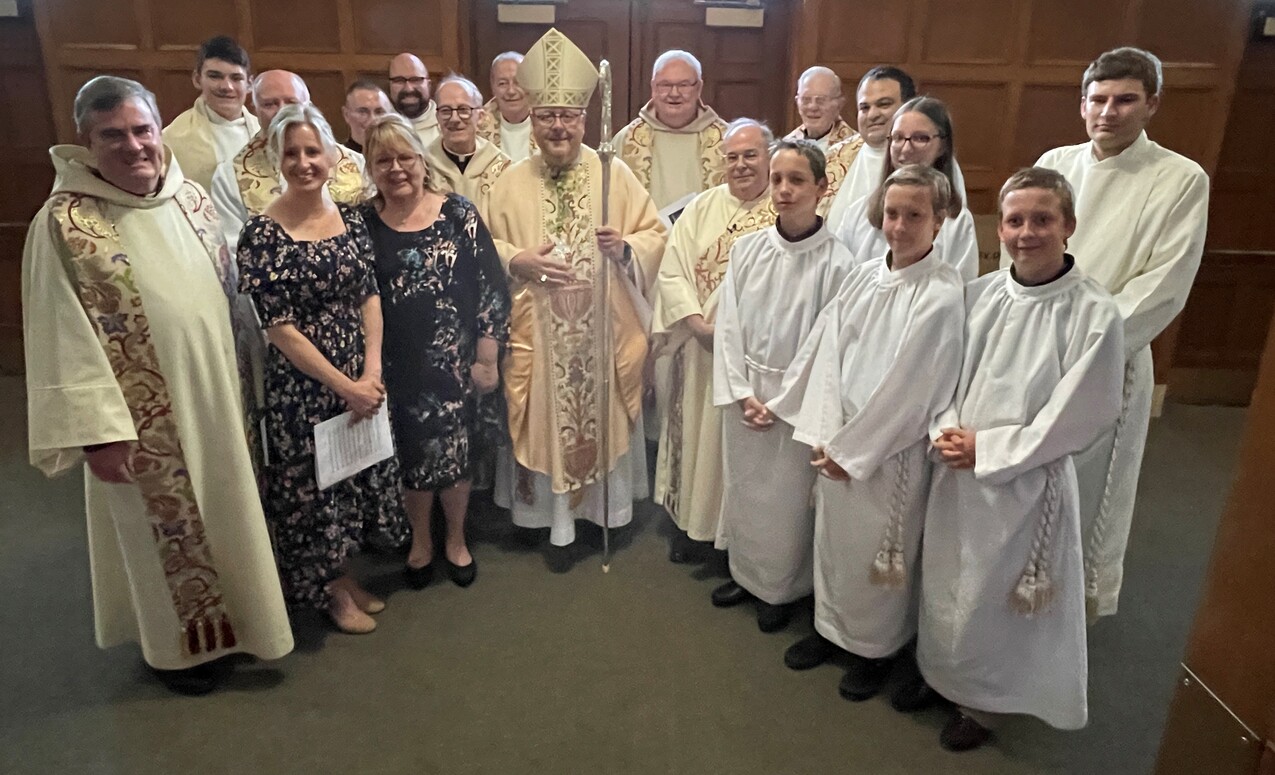 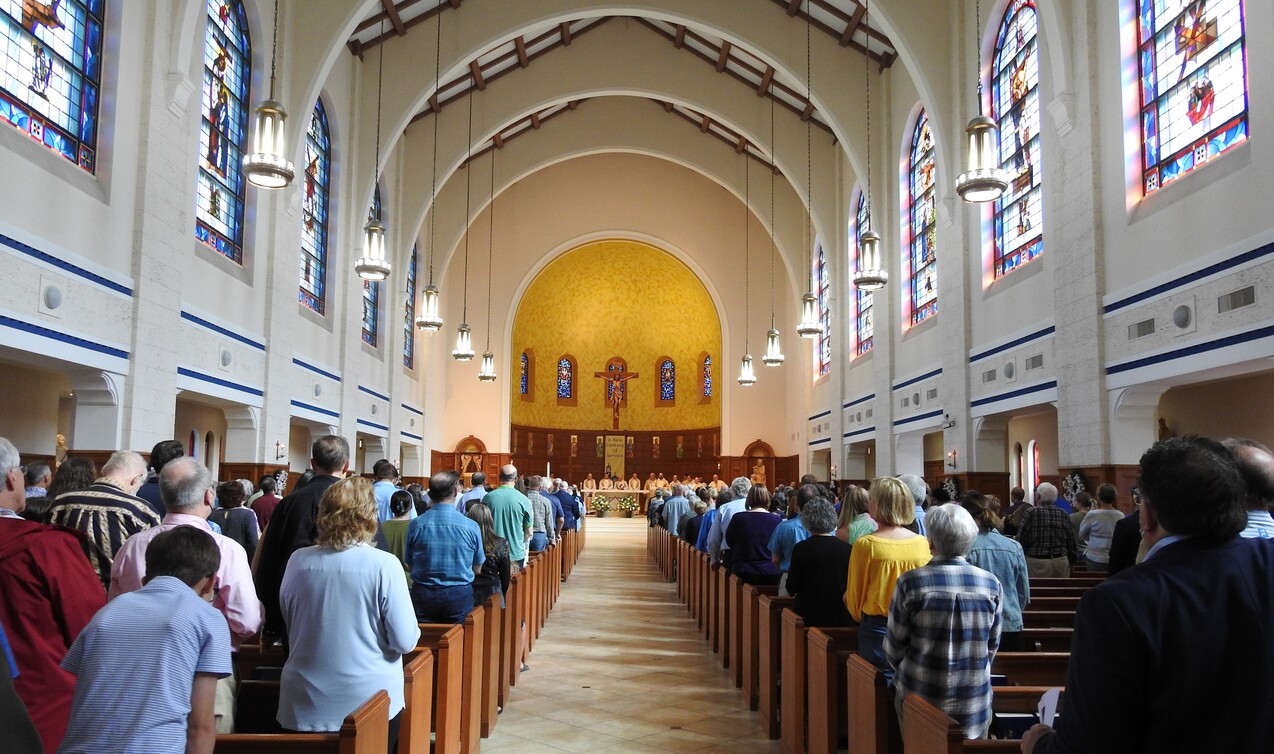 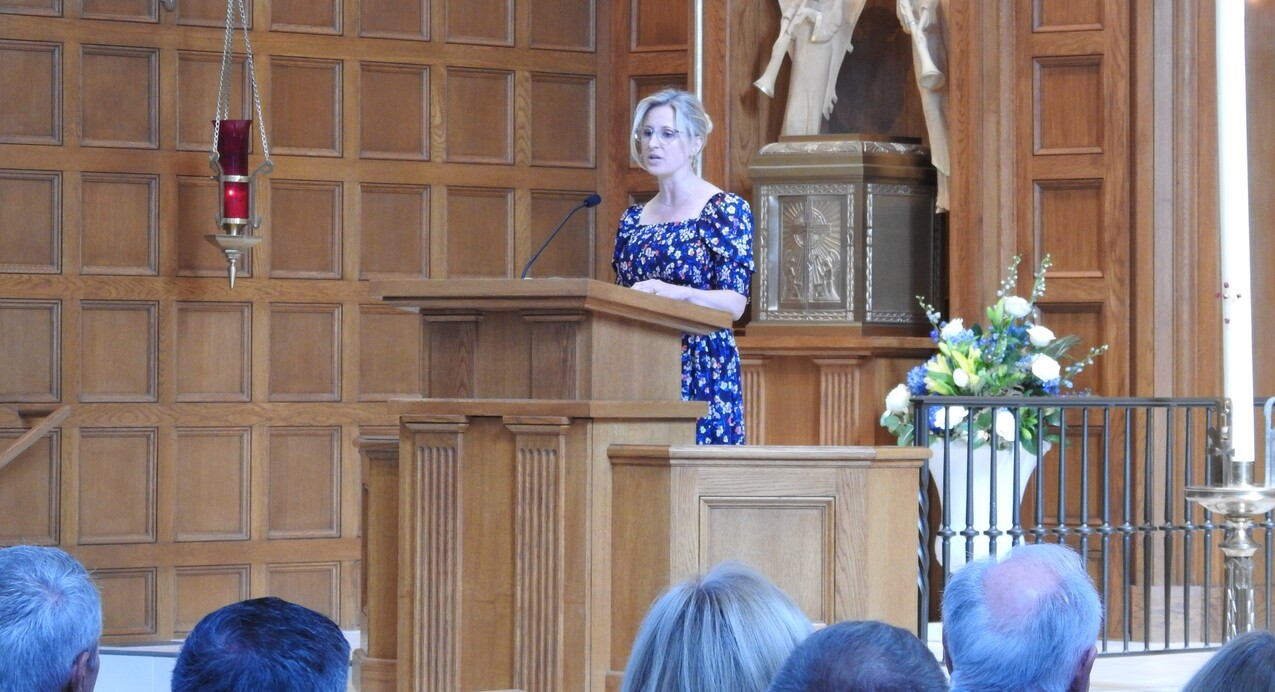 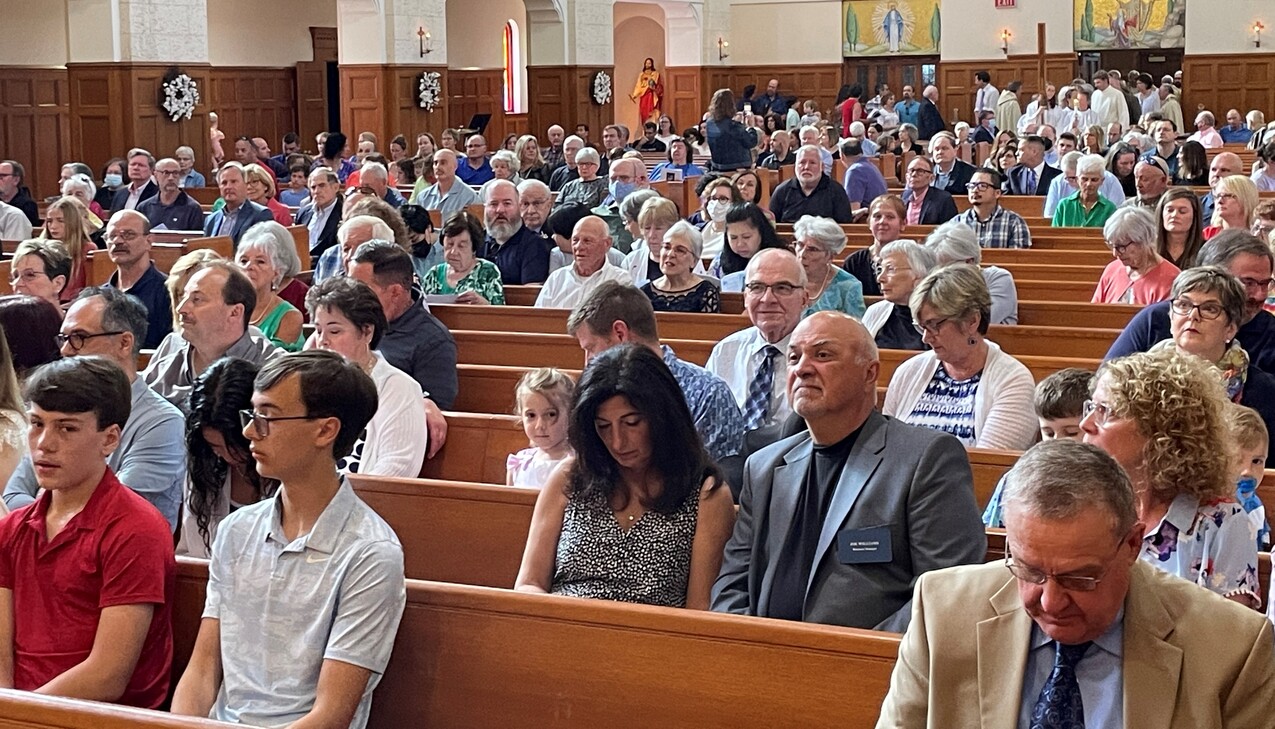 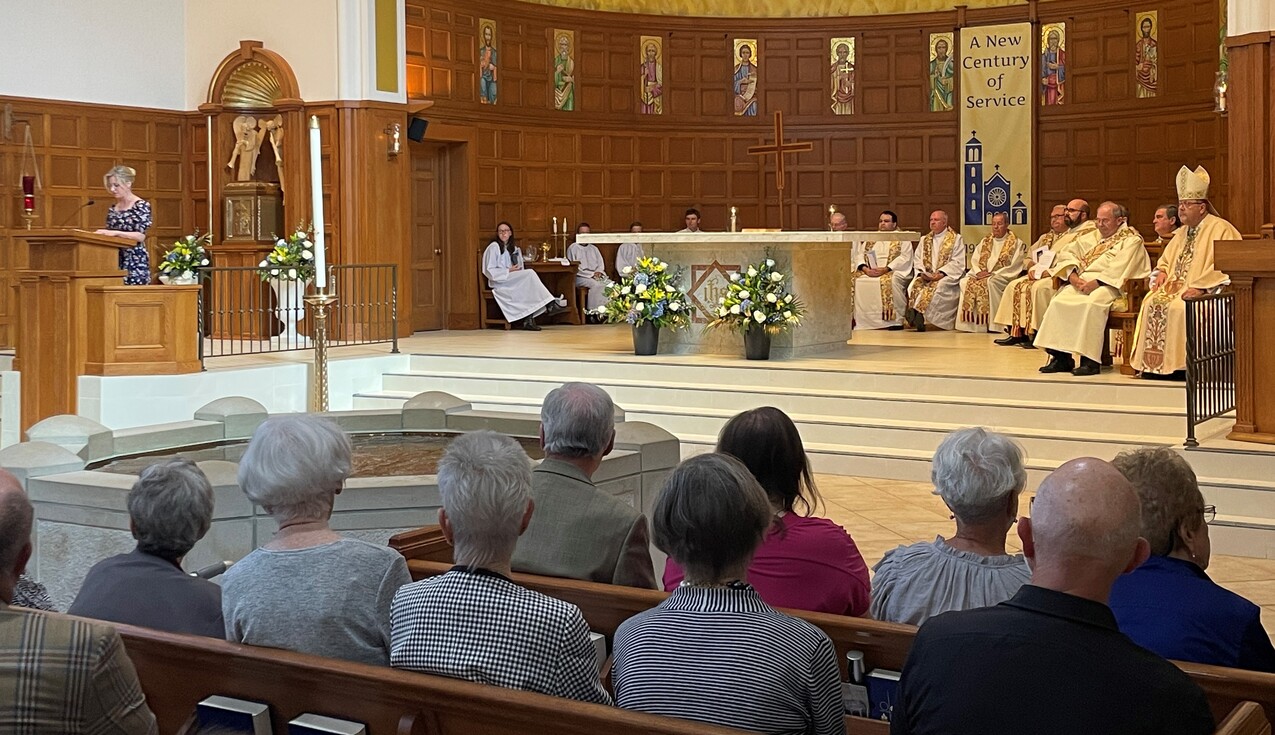 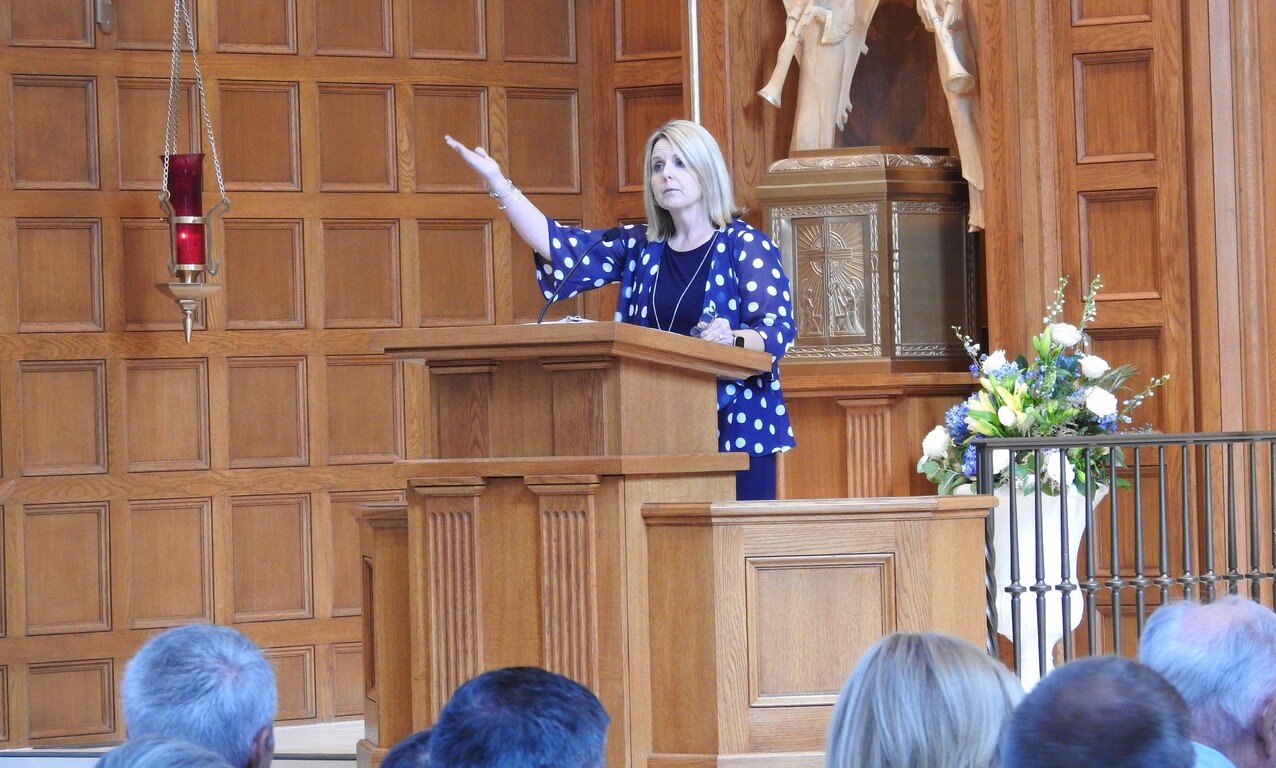 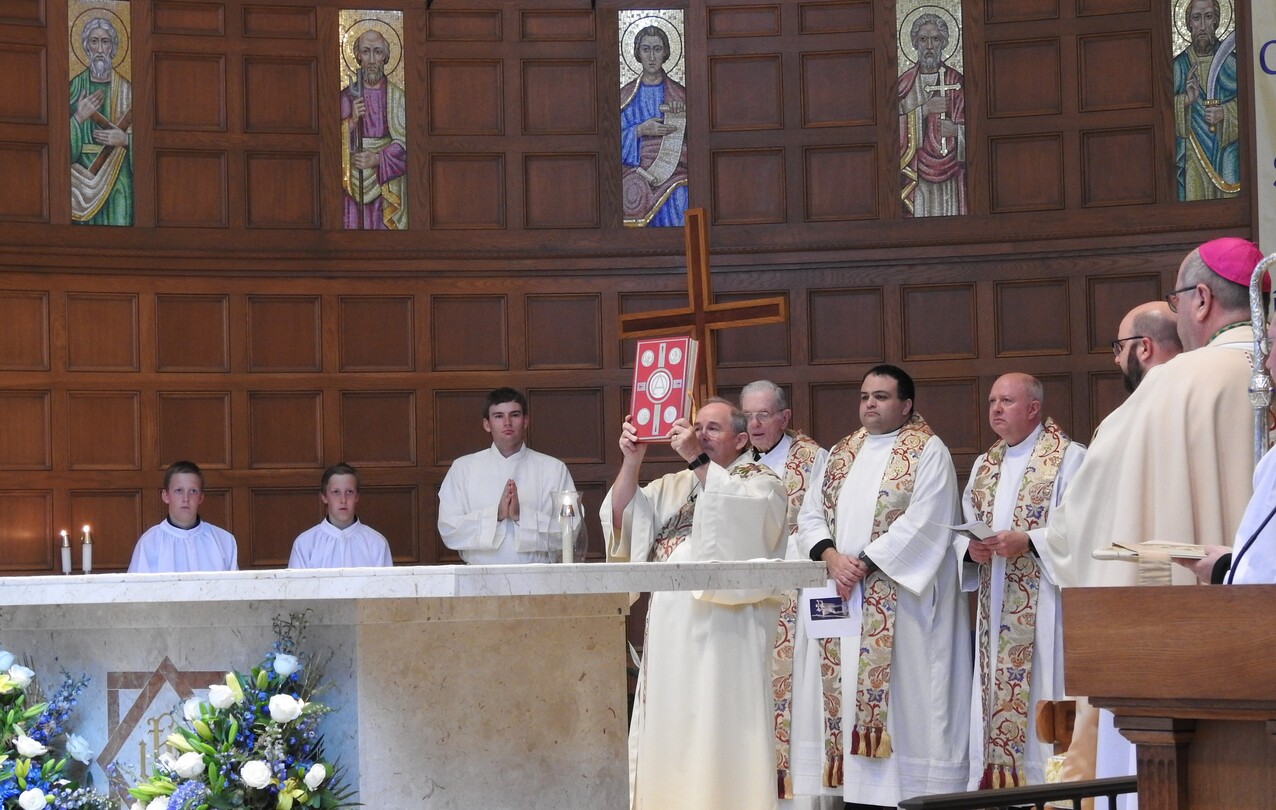 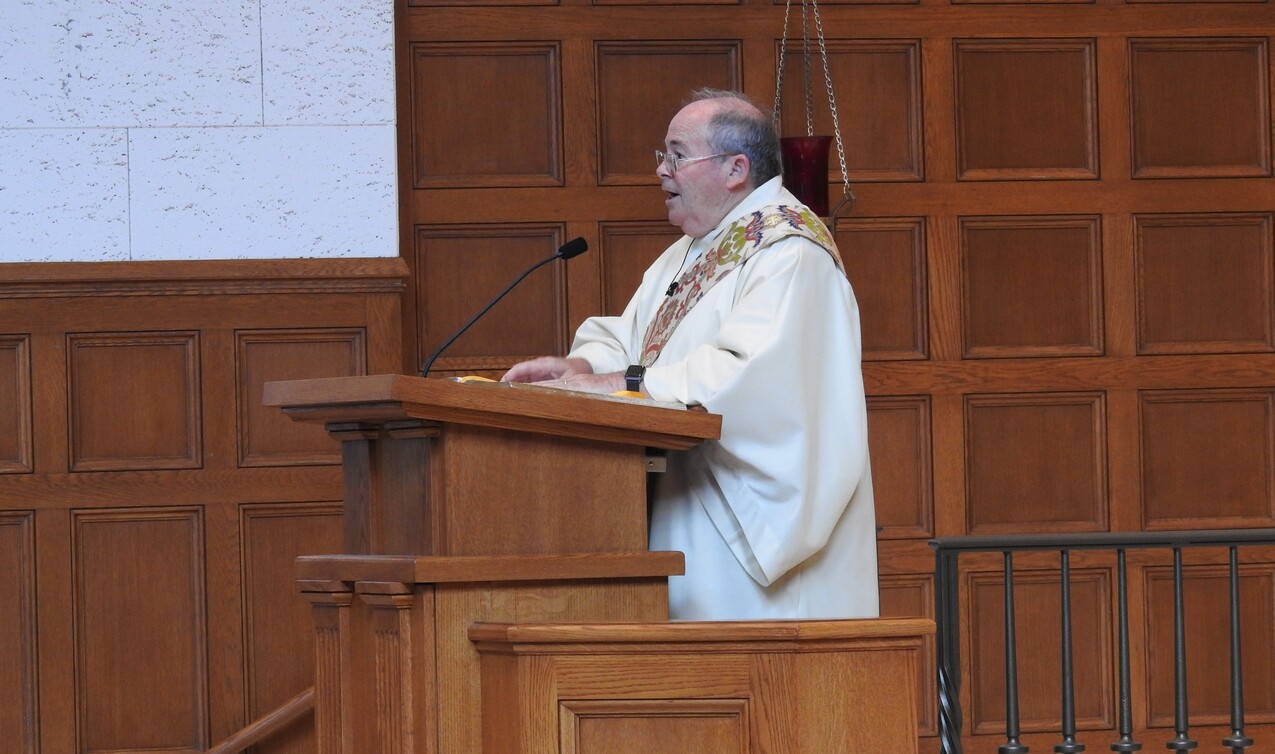 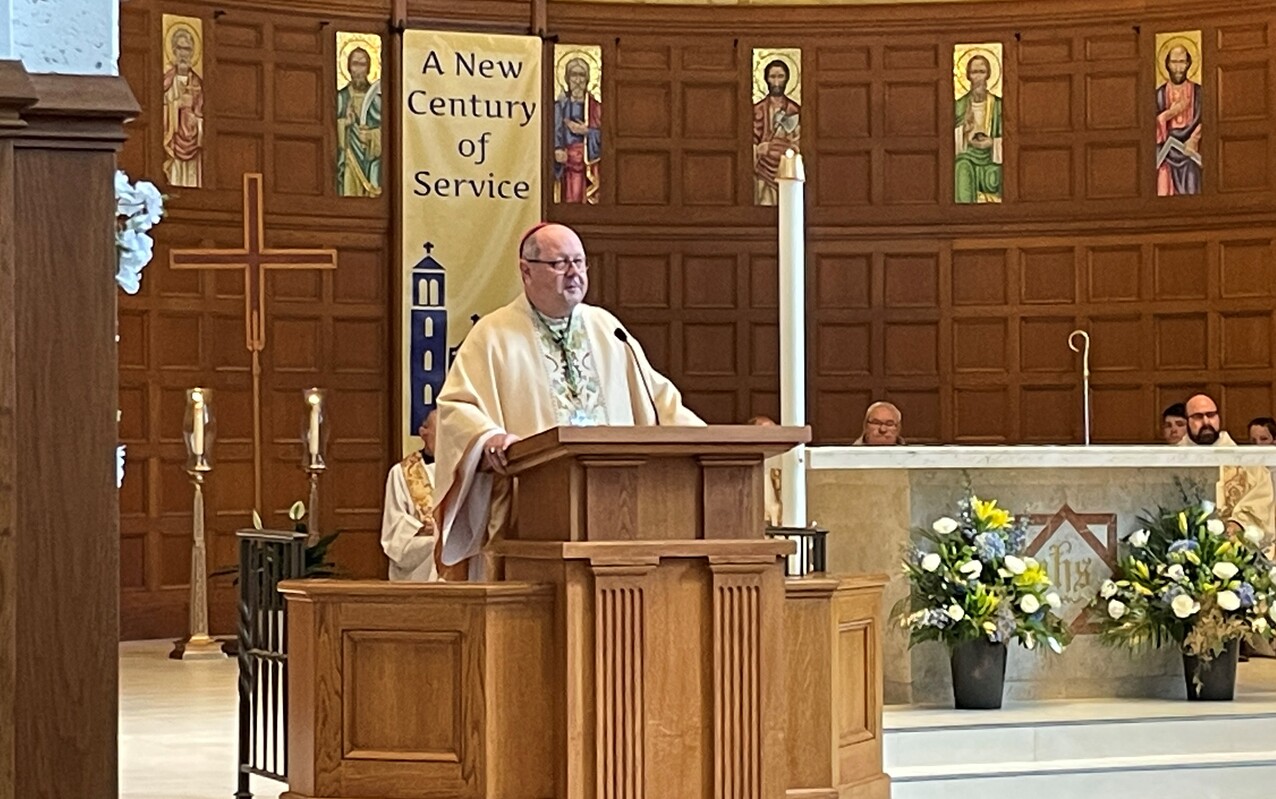 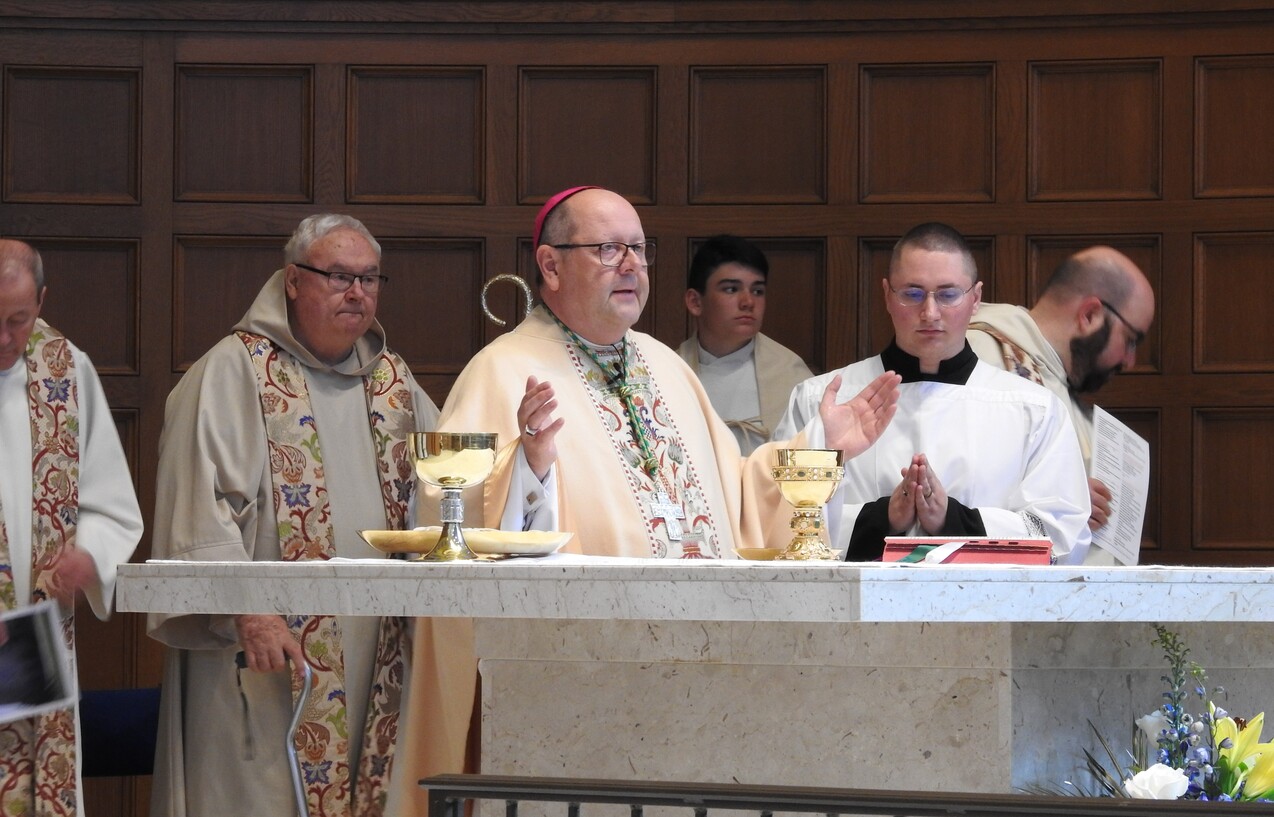 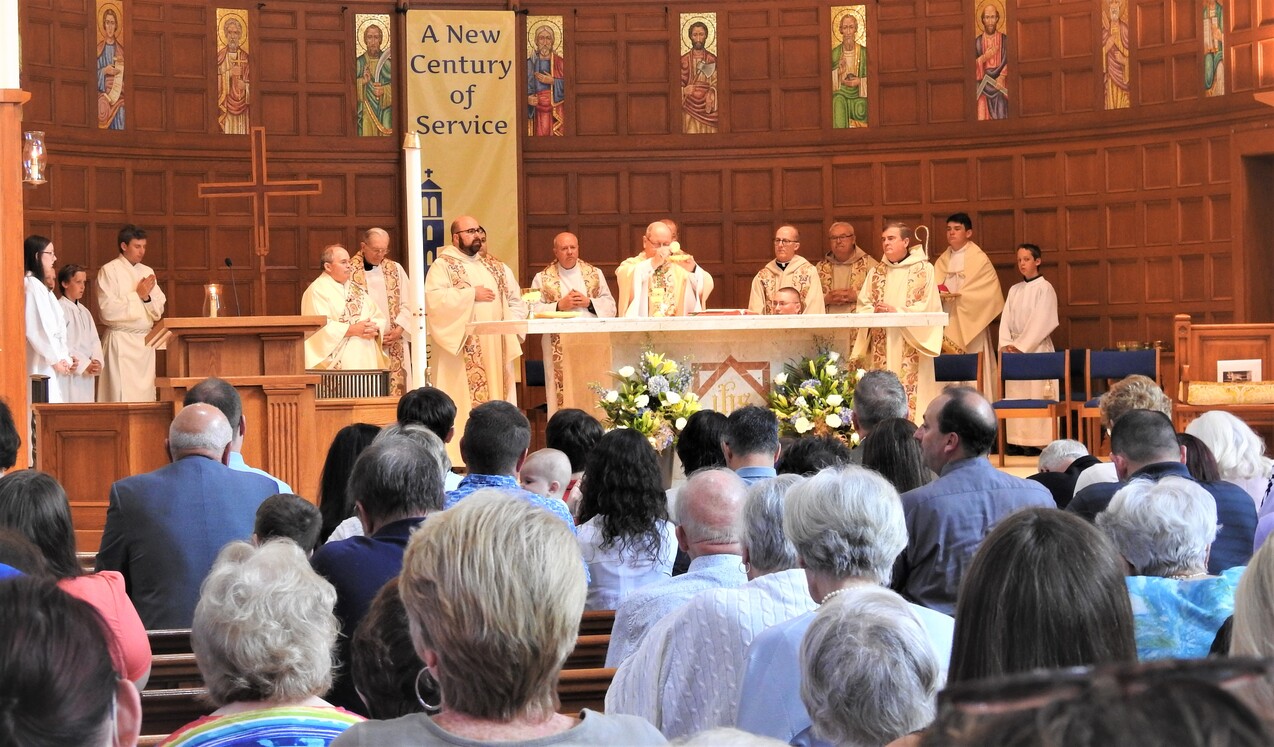 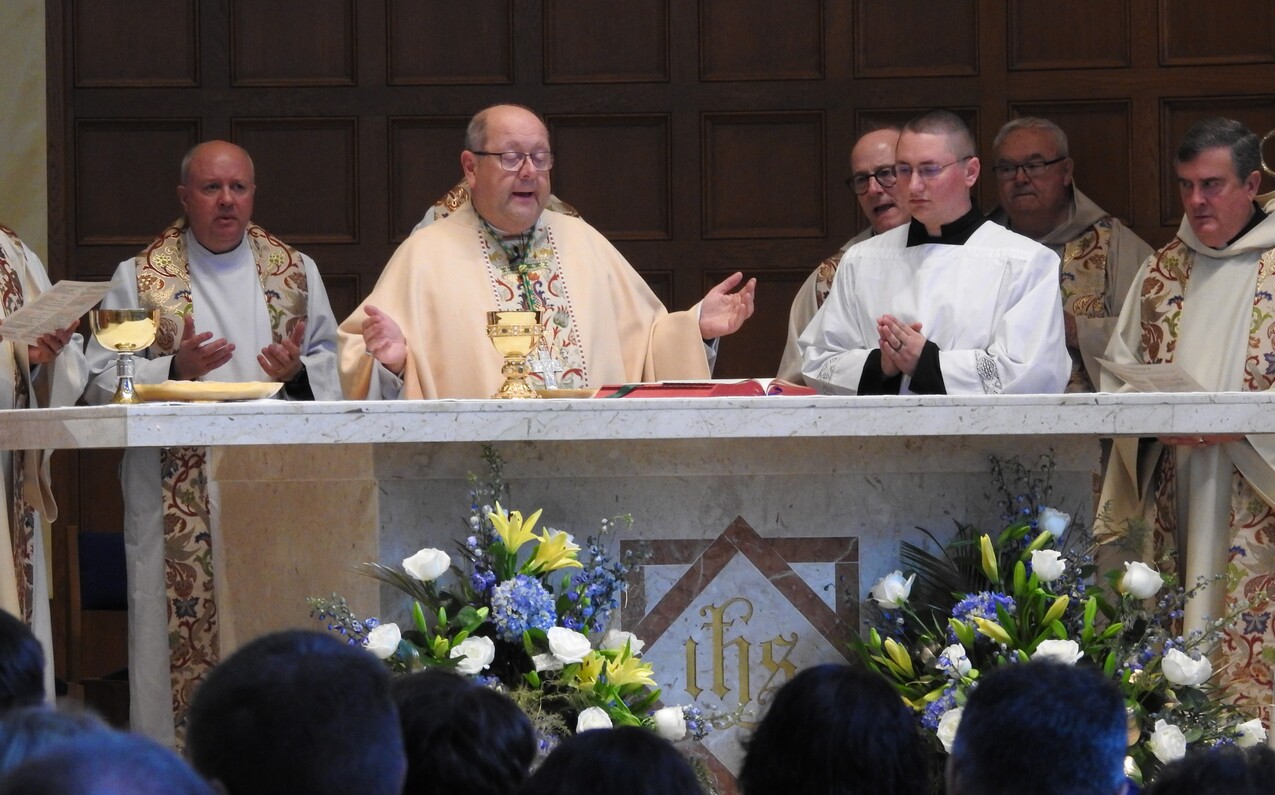 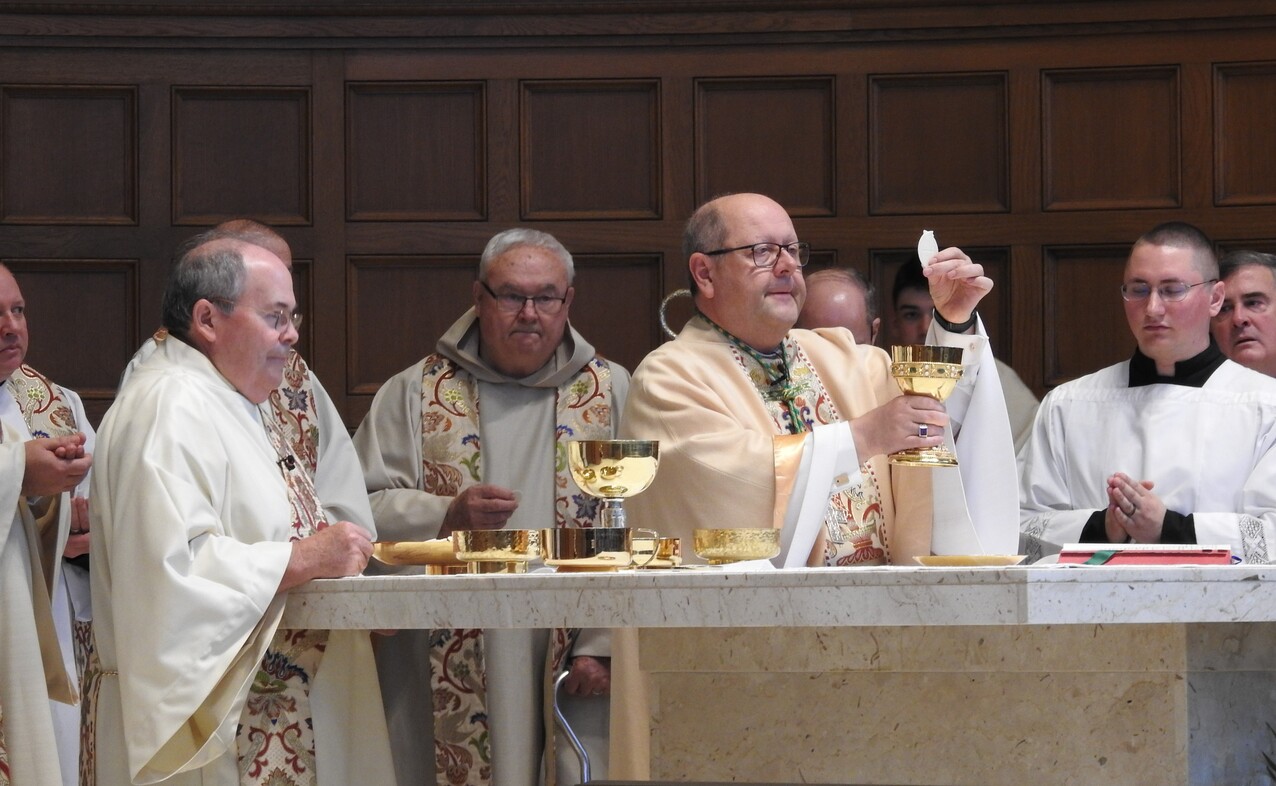 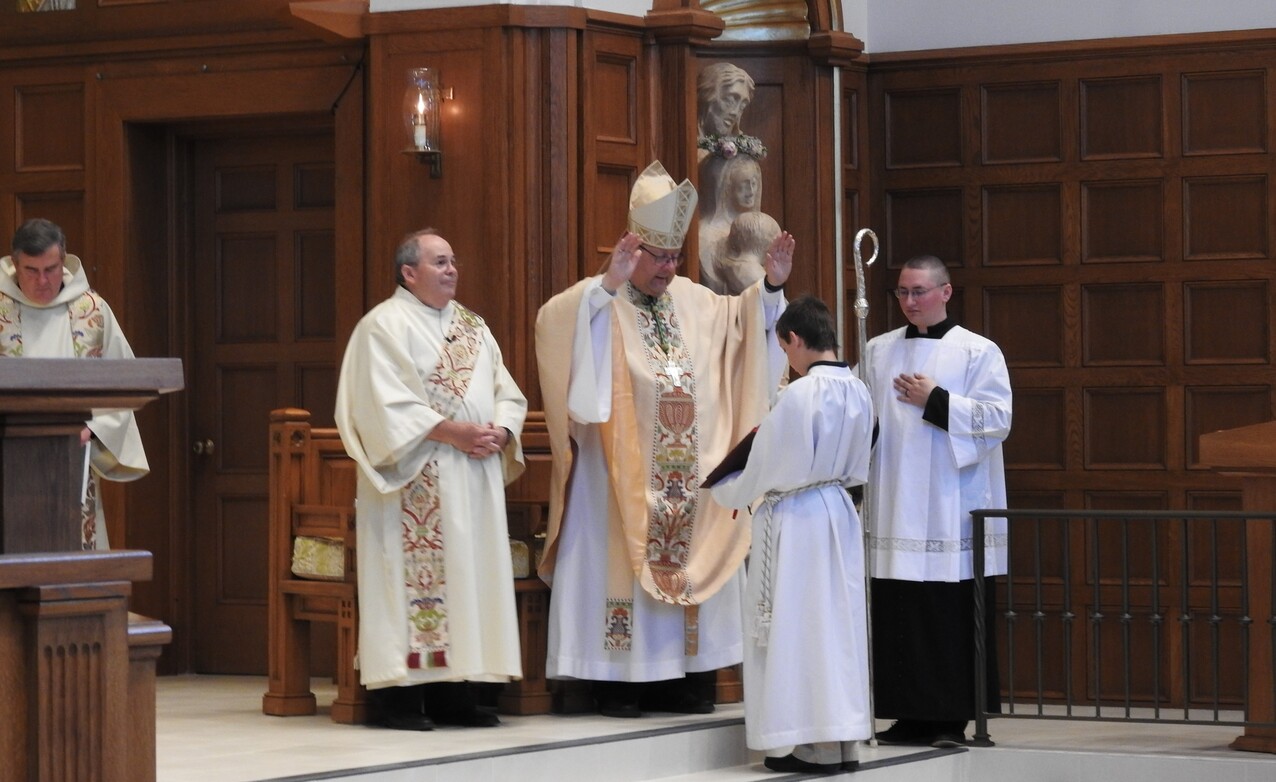 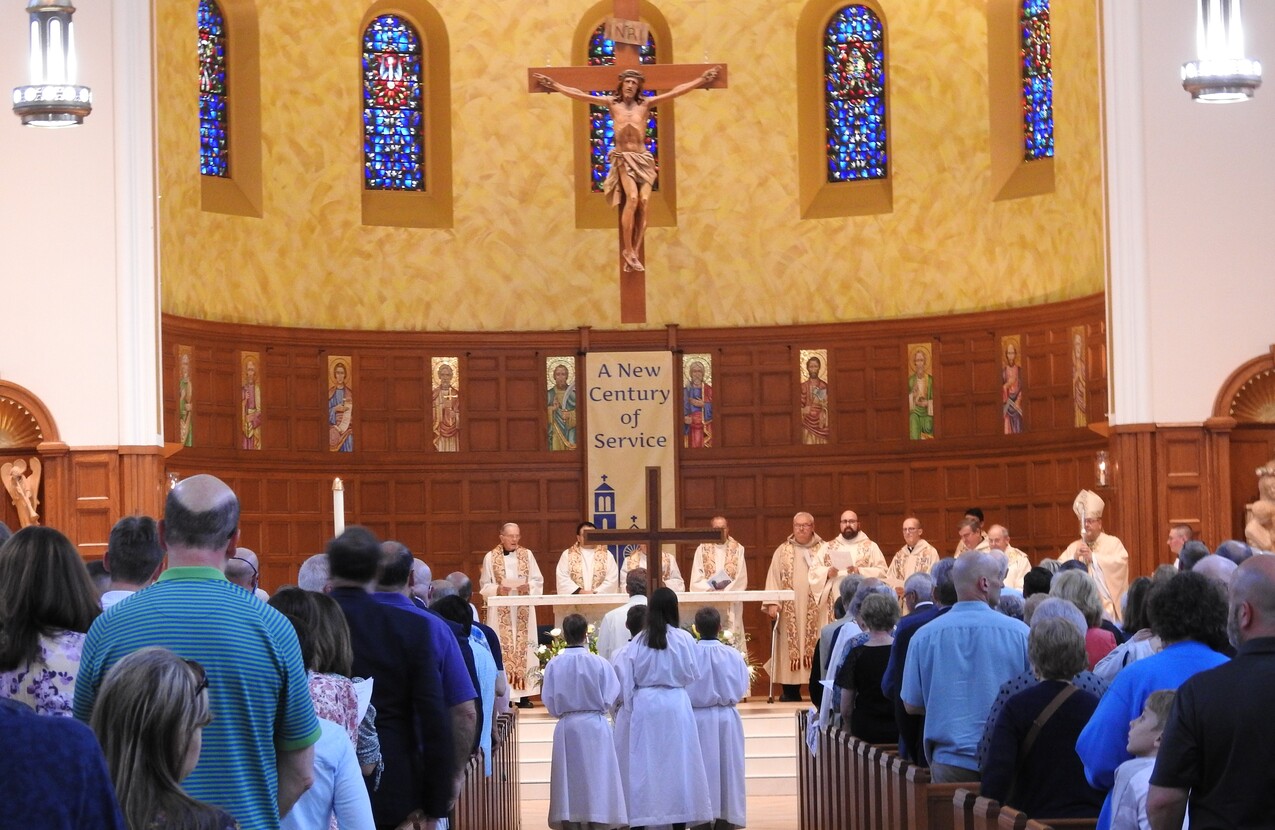 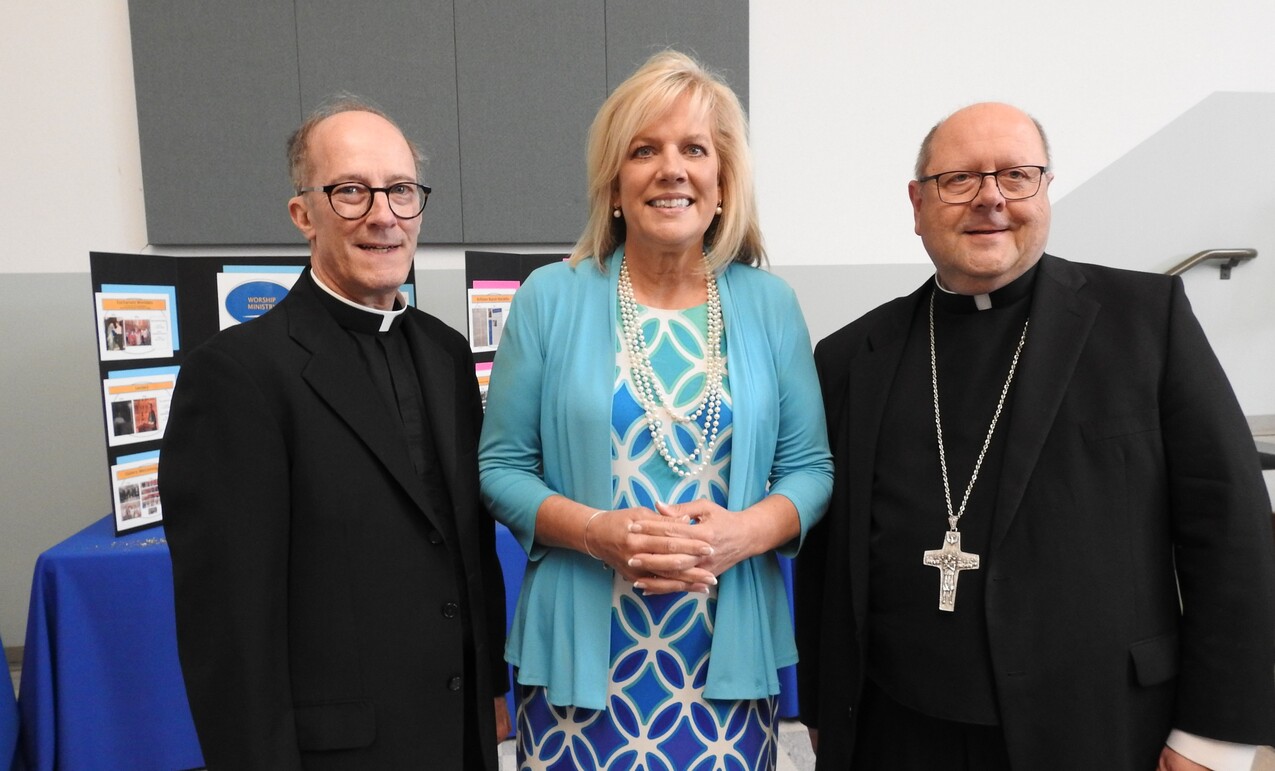 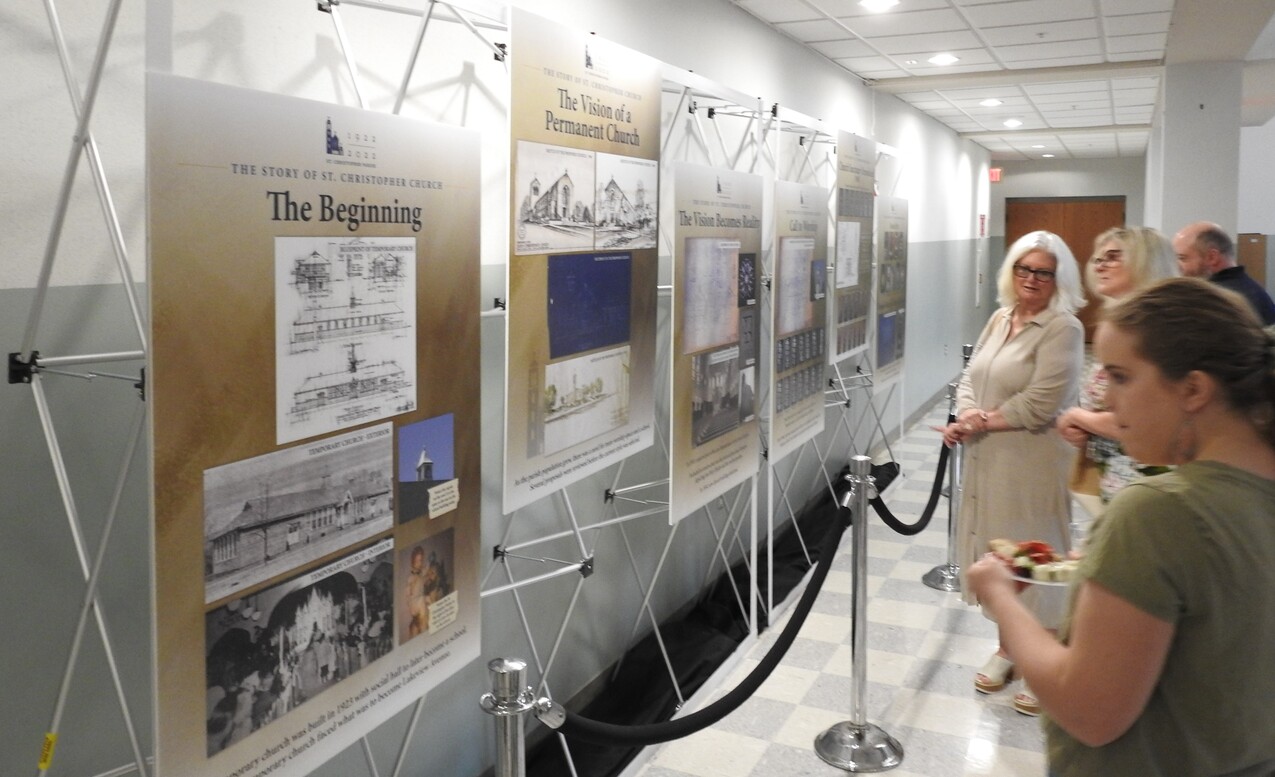 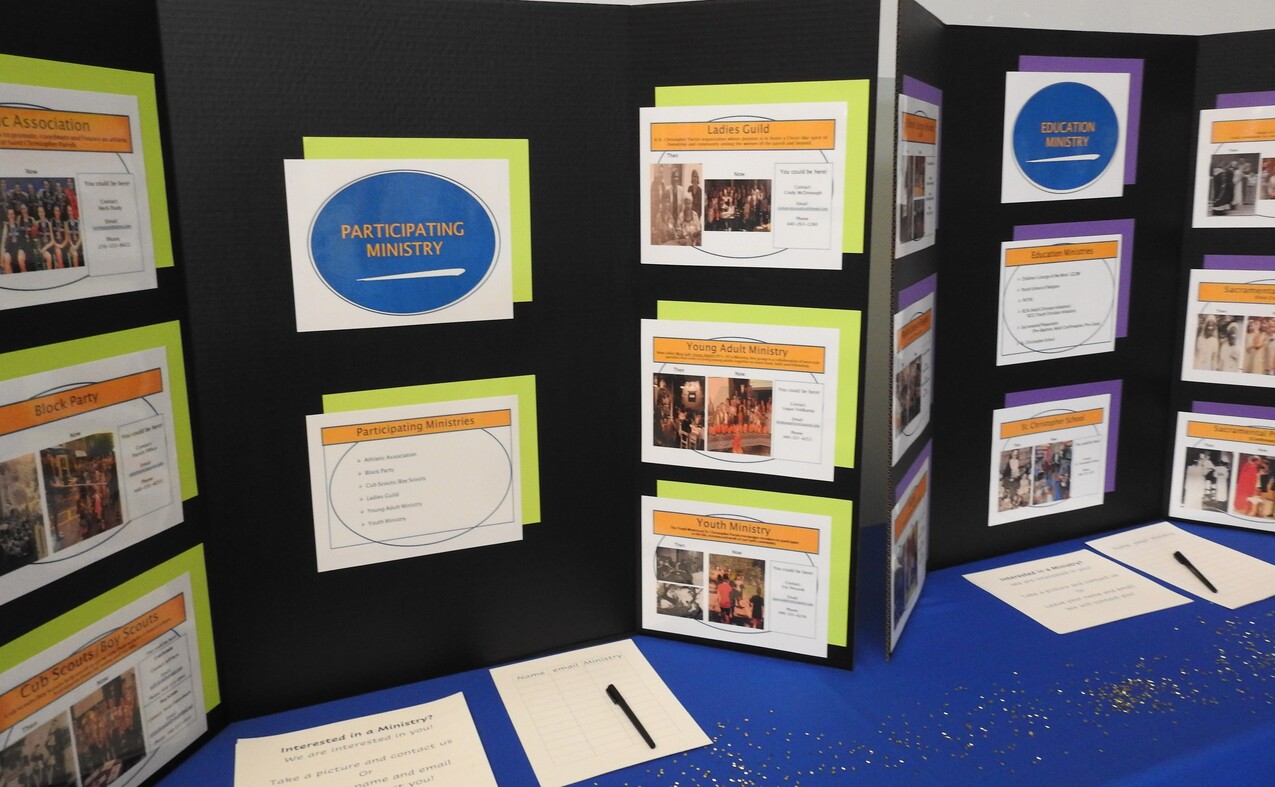 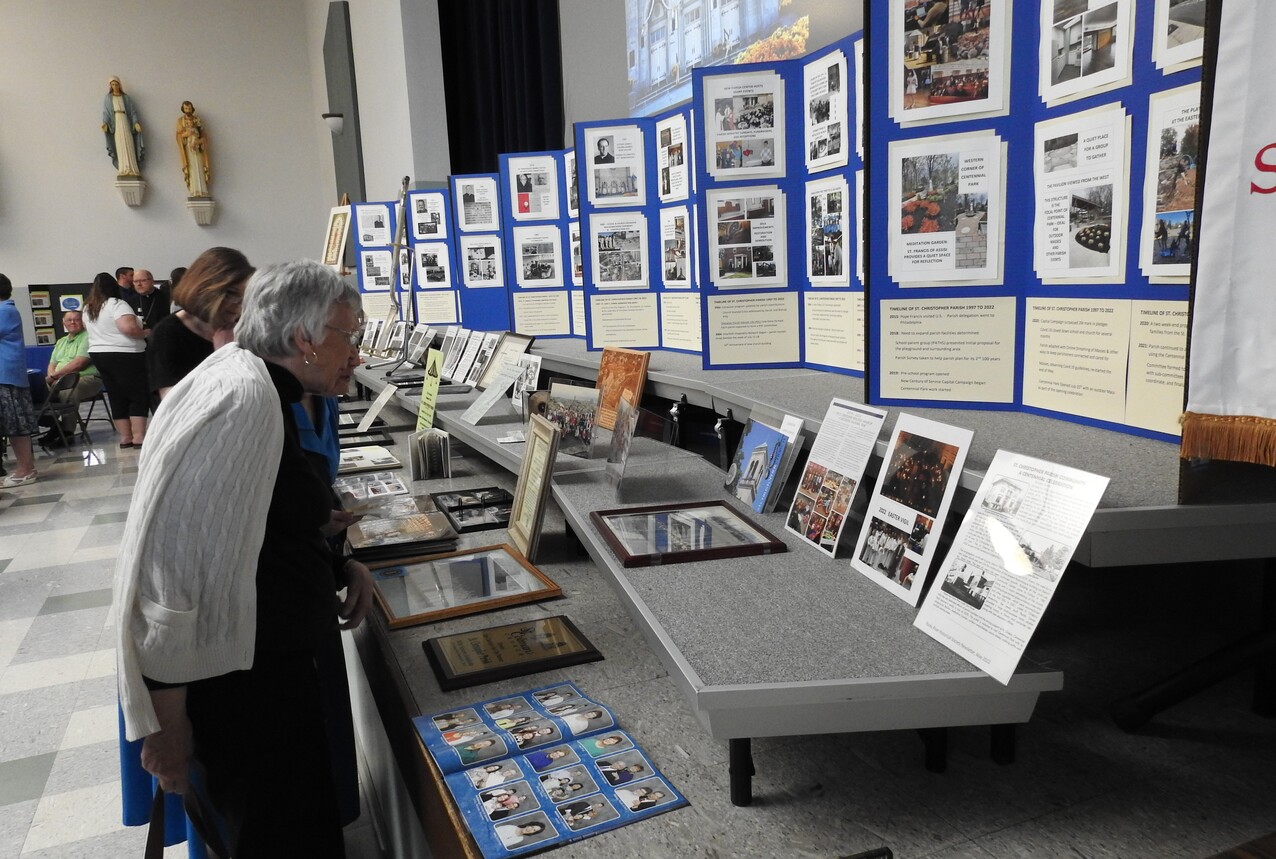 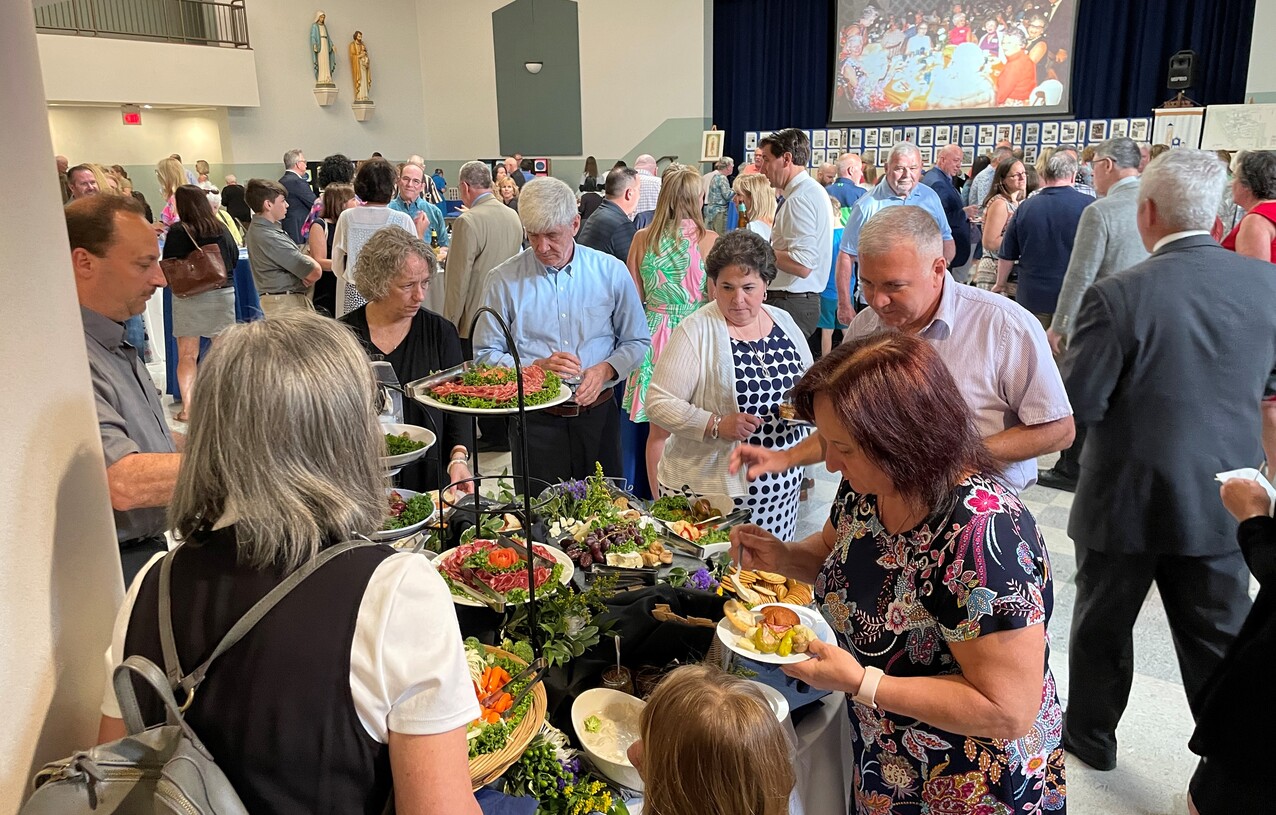 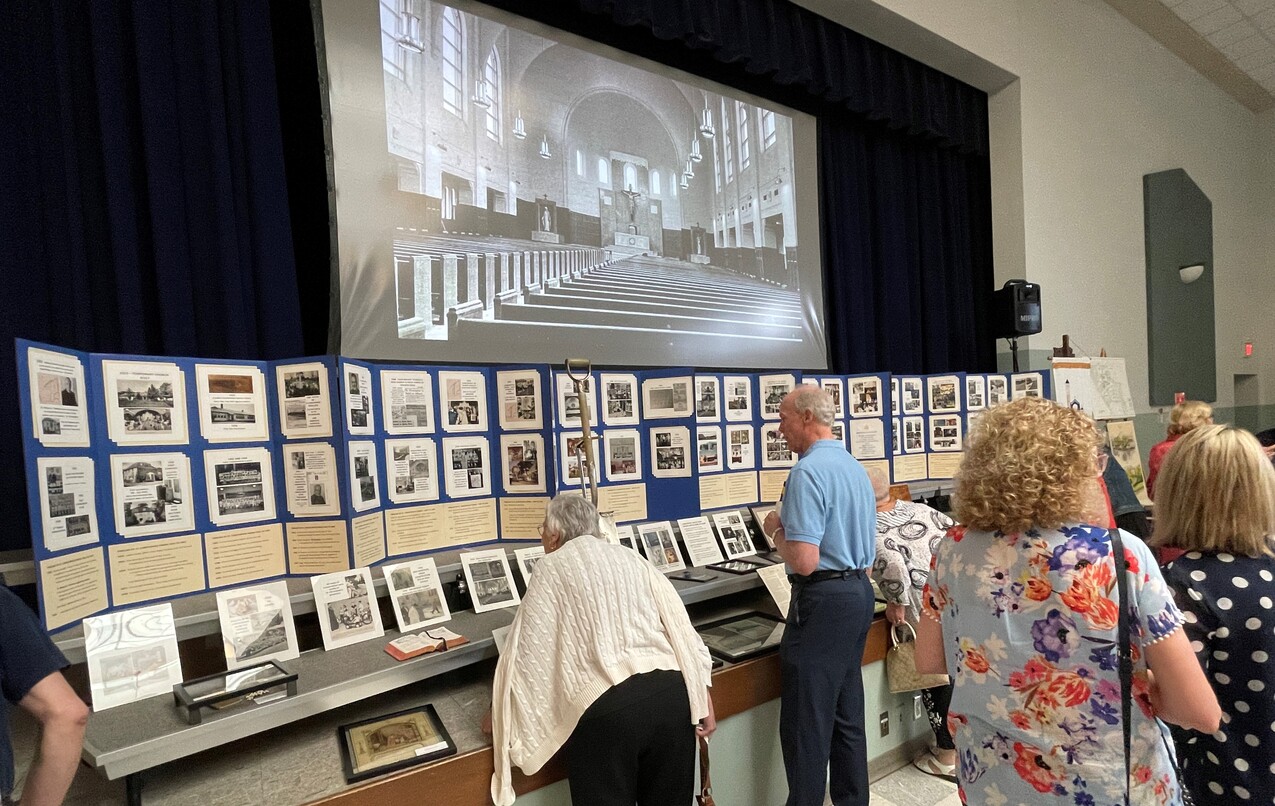 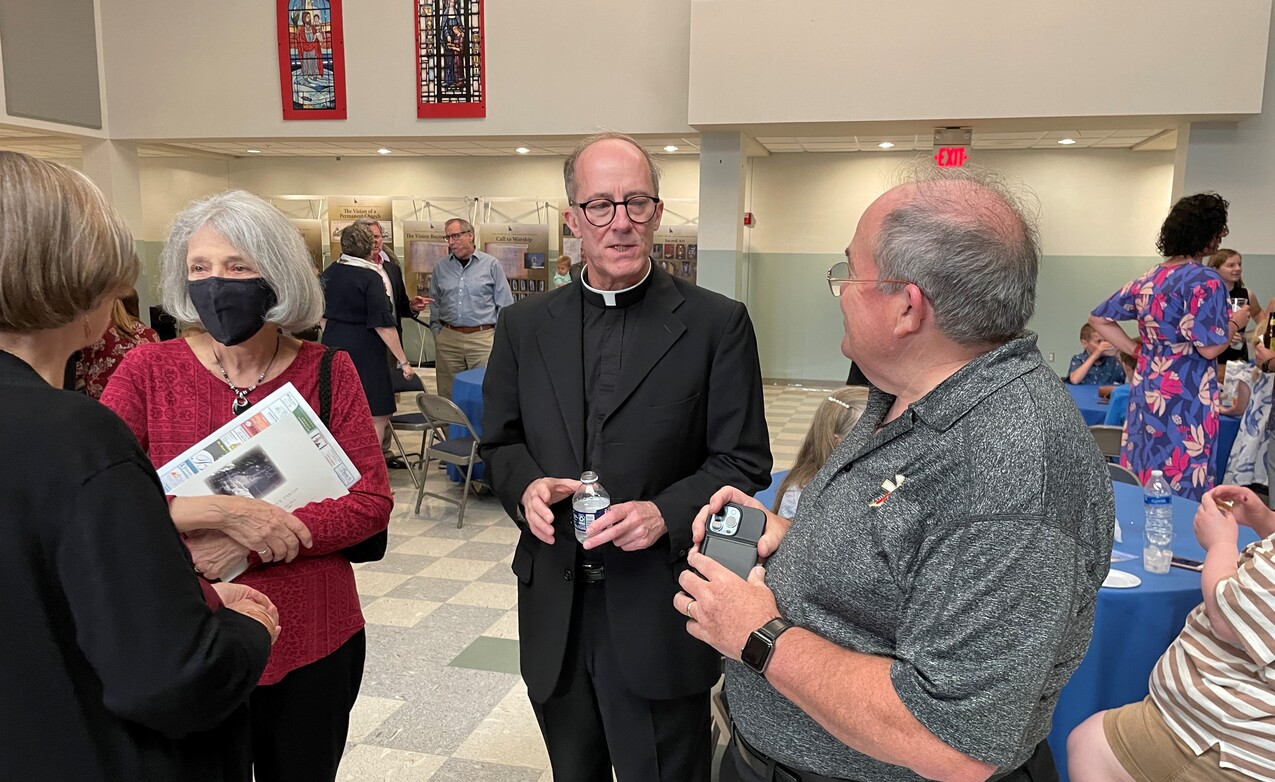 On May 14, 1922, about 40 families gathered at Rocky River Town Hall for the first Mass of the newly established St. Christopher Parish in Rocky River.

A much larger group turned out to launch the parish’s100th anniversary and a new century of service with a Mass celebrated by Bishop Edward Malesic on May 14. The parish now has about 3,100 families.

A lot has changed since the early days of the parish. At the time, Rocky River consisted of large tracts of farmland and the now bustling Wagar Road was little more than a dirt trail. Bishop Joseph Schrembs recognized the potential growth for the Cleveland Diocese west of the Cuyahoga River, so he carved out four new parishes.

St. Christopher’s first pastor, Father Richard Patterson, was the bishop’s secretary. He chose the name St. Christopher after the patron saint of travelers and motorists. The choice seemed logical because the automobile age was dawning and would play a role in transforming Rocky River into a bustling suburb.

In August 1922, the diocese purchased seven acres of land on Detroit Road and soon construction began on the parish’s first church building. The first Mass was celebrated on Palm Sunday in1923 and the building was dedicated on June 22, 1924.

The following year, Father Patterson began a parish tradition: the annual blessing – with a relic of St. Christopher -- of cars, trucks and motorcycles as they passed in front of the church. The parish later built a St. Christopher Shrine.

In 1926, St. Christopher School opened in two classrooms attached to the church building. The Sisters of the Humility of Mary welcomed students in grades 1-4. Three years later, two more classrooms were added.

The parish continued to grow, adding more classrooms and a rectory. By 1934, there were about 1,000 families registered. Msgr. Patterson served the parish until his death in 1947.

After Father Ahern’s death in 1958, Msgr. Bernard Weigand was appointed pastor. Under his guidance, the parish retired its mortgage, established a parish council and expanded the rectory. When he retired in 1973, Father Edward Prendergast became pastor. Among his contributions were overseeing the 1981 completion of the parish community center and converting the convent into classrooms and offices in 1991.

Father John Chlebo, the current pastor, began serving the parish July 1, 1997. In 2001, he oversaw construction of a new Parish Center with many useful amenities, including a large multipurpose room with a stage, a full kitchen and four smaller meeting rooms. Also included were a new library, computer lab, additional offices for parish ministries, a gathering area, prayer room and improved handicap accessibility.

In 2008, the church was renovated and a baptismal font for immersion was added near the altar. A statue of the Holy Family was added, the tabernacle was moved to a more prominent location, the sanctuary was made handicap accessible, stained-glass windows were added to the gathering area and prayer room and other improvements were made to the parish physical plant.

Bishop Malesic reminded the congregation that a parish doesn’t run itself. “It takes many people with the sharp focus of bringing people closer to Christ,” he said, thanking the priests, religious sisters and others who have undertaken that ministry. He urged them to “continue to proclaim the Gospel of life, justice, peace, hope and love.”

Love was the central focus of the day’s Gospel, the bishop said, explaining that type of love goes beyond all expectations. It is a self-emptying, humble and generous love, he said.

As he questioned how Jesus could be glorified in his death, which was so brutal, the bishop reflected on seeing the musical “Jesus Christ Super Star” recently. He talked about how realistic and bloody looking the scourging scene was. Adding a new dimension was some gold dust that was sprinkled onto the blood, making it somewhat shiny.

“We glory in the cross because the power of God redeemed us by Jesus’ death. Jesus dying for us shows us that sacrificial love will save us all, he said, adding Jesus rose on the third day. “That is the new life he promised to those who follow him. Love one another as I have loved you,” he tells us.

“This type of love is not rude or brooding. It always seeks the good of another,” he said. Jesus gives himself to us in the unbloody sacrifice of the Mass and then asks us to give ourselves to him, the bishop said.

Father Chlebo thanked Bishop Malesic for visiting and celebrating the centennial Mass. He also expressed appreciation for the parish staff, volunteers and others who made the celebration a reality. Festivities will continue, he said, with a weekend event planned for Aug. 26-28.

“You folks and your families – past and present – are the heart of this parish,” Father Chlebo said.

After Mass, the group moved to the Parish Center for a reception and displays encompassing the parish history, including memorabilia loaned by parishioners.