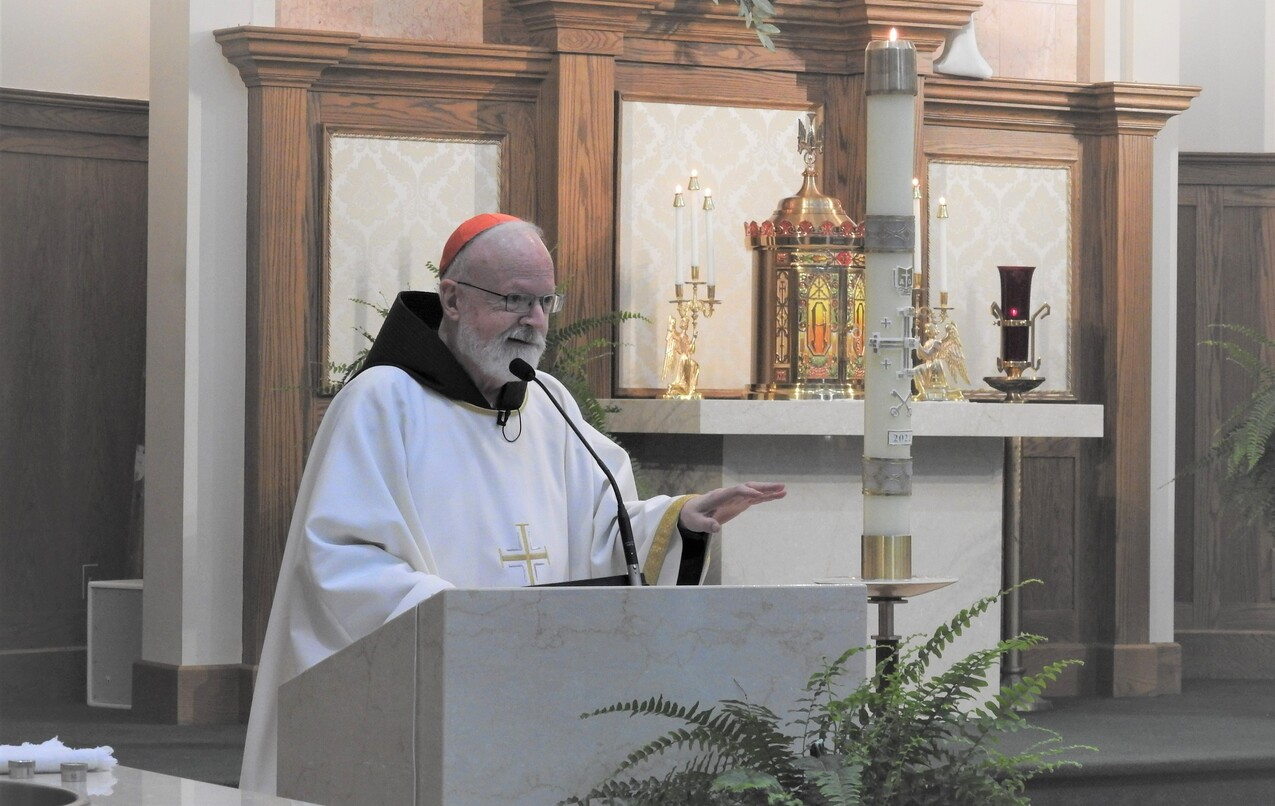 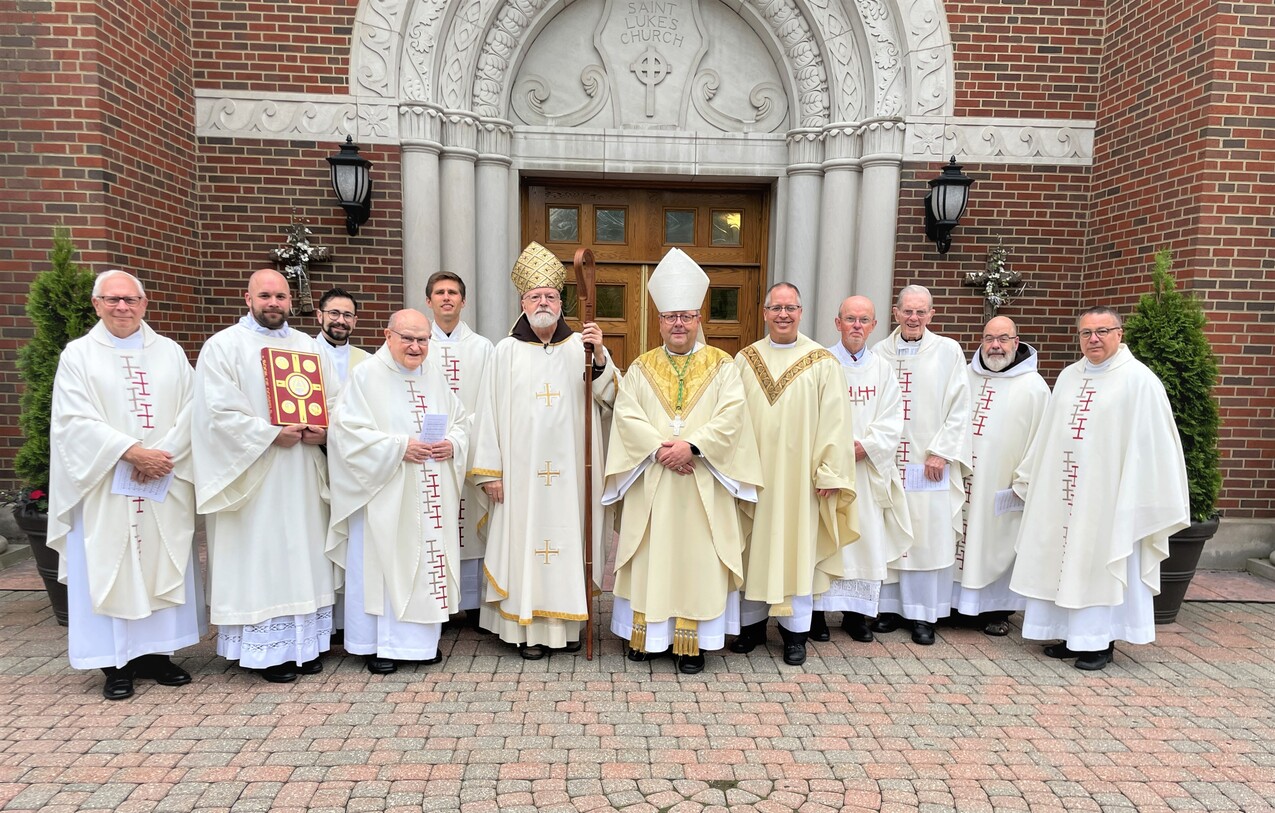 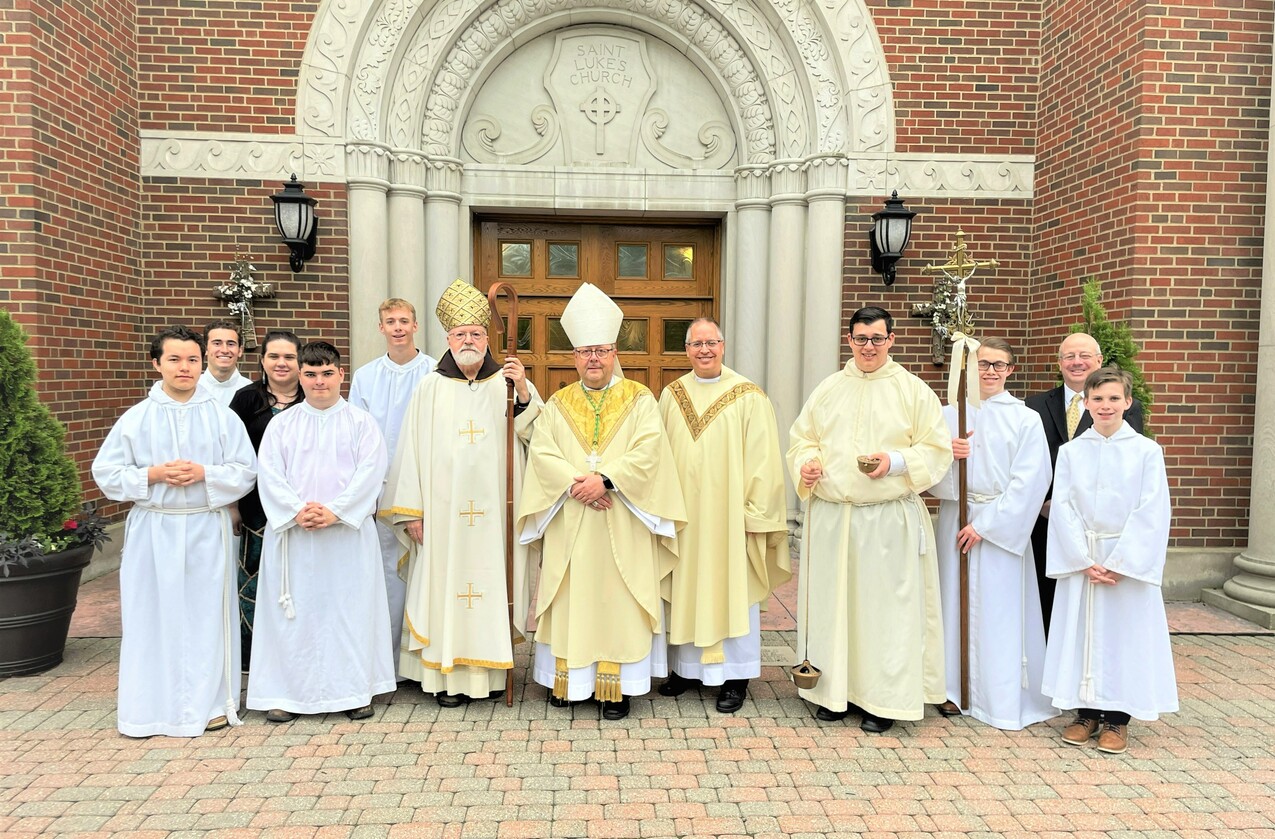 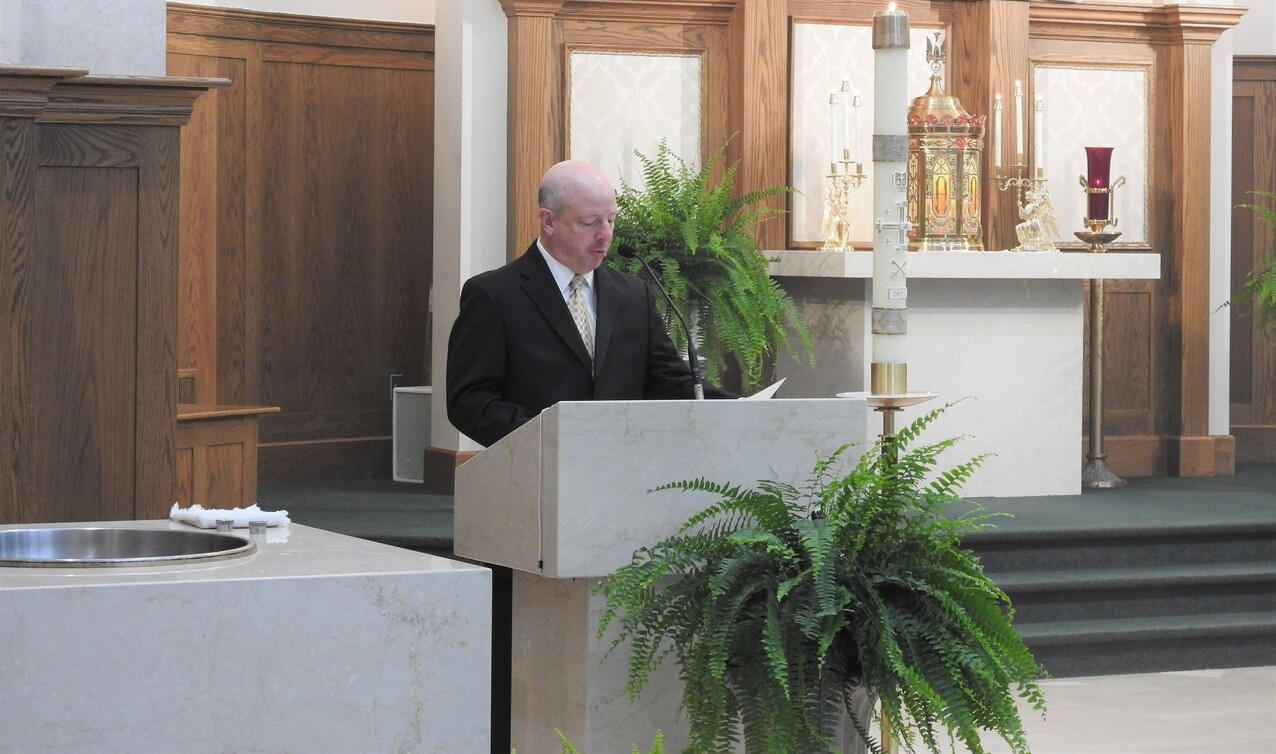 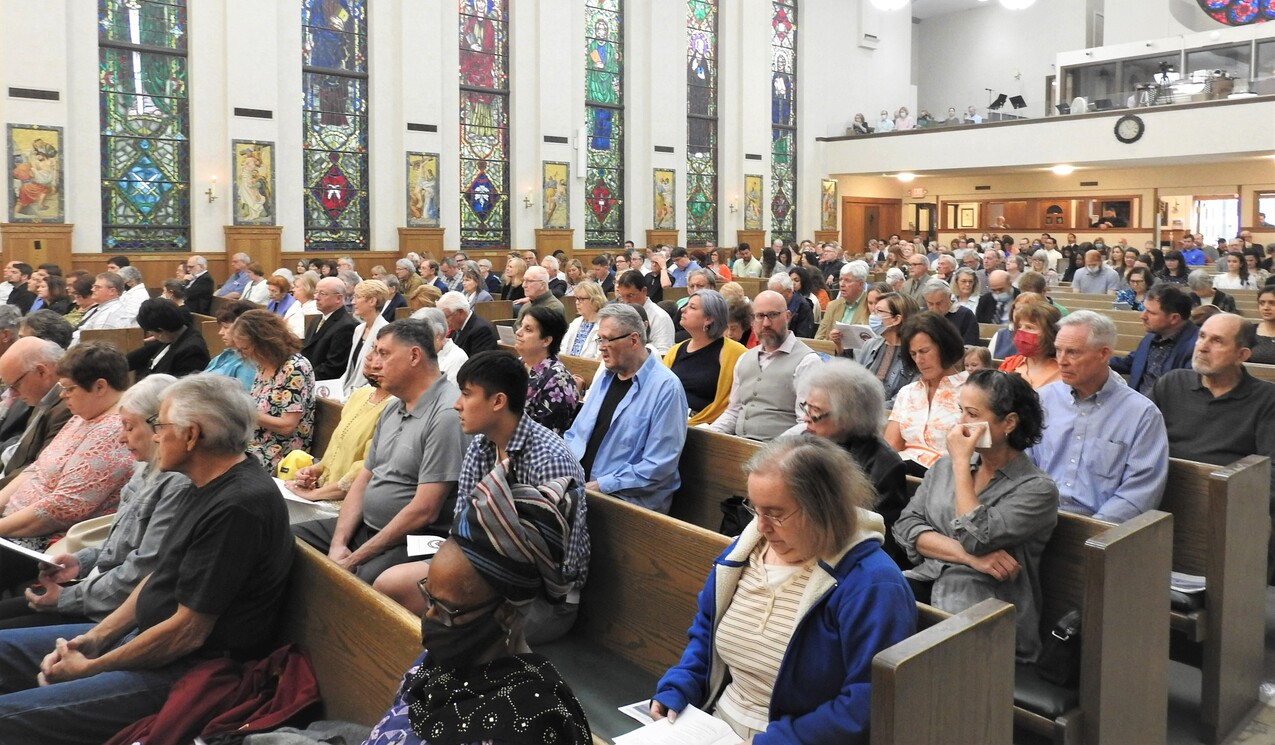 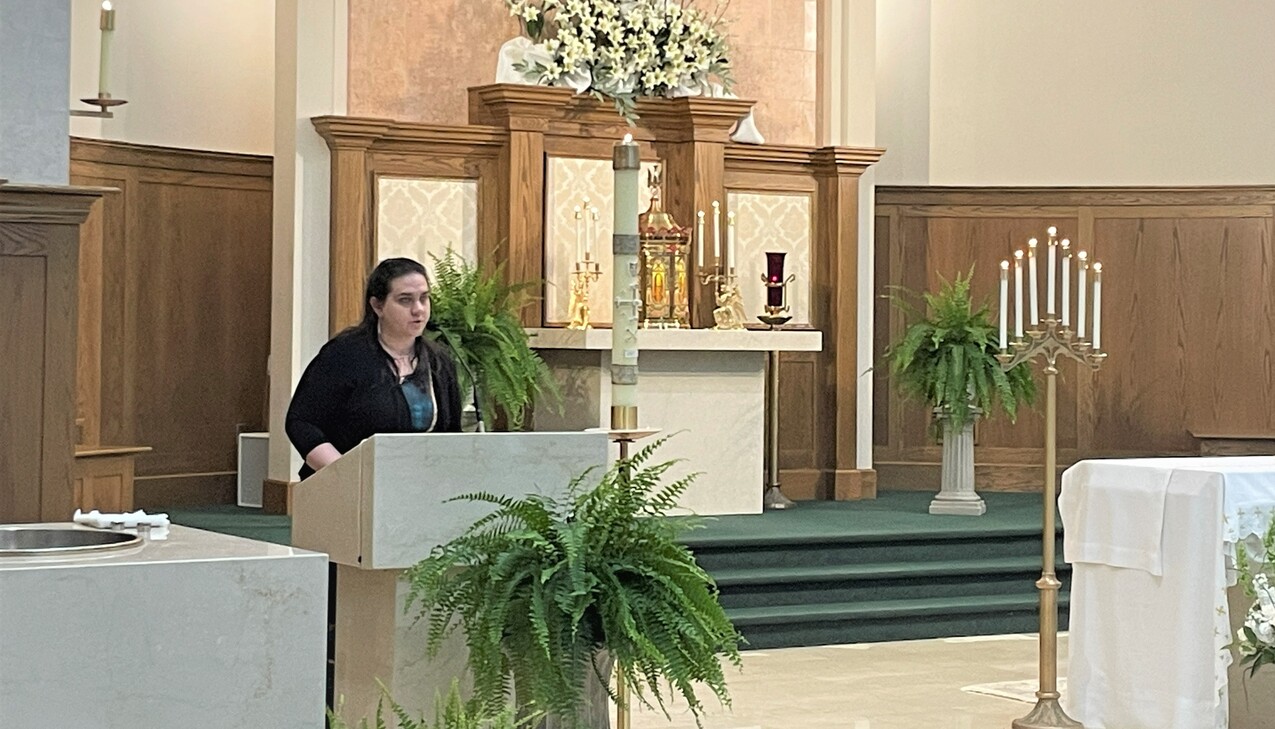 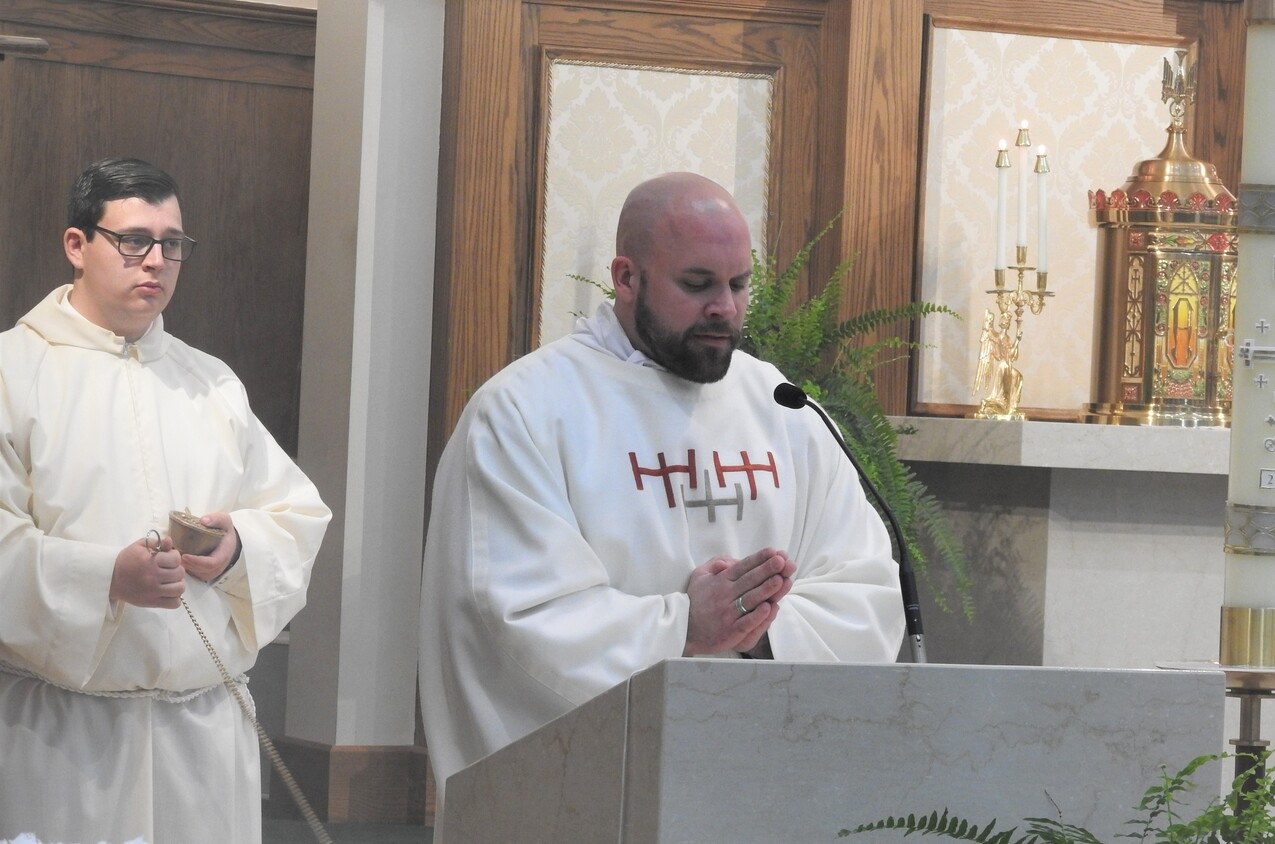 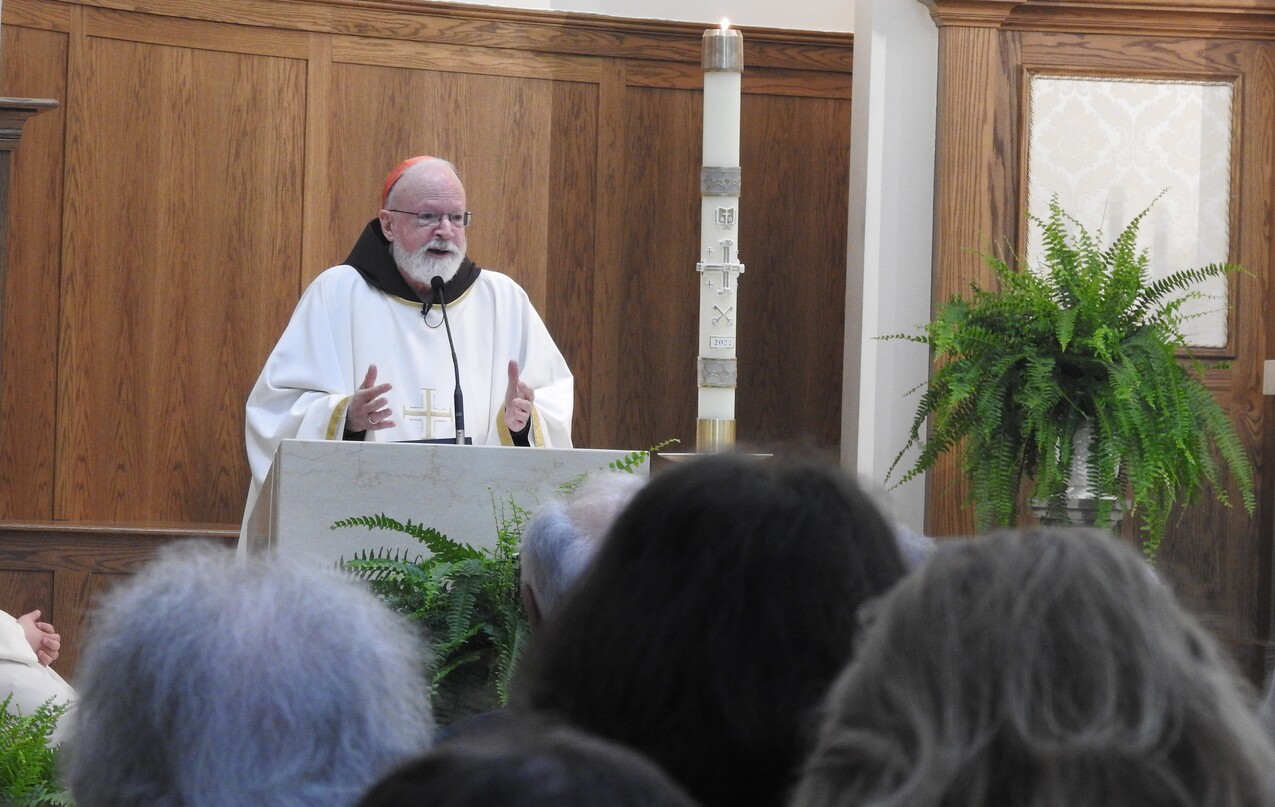 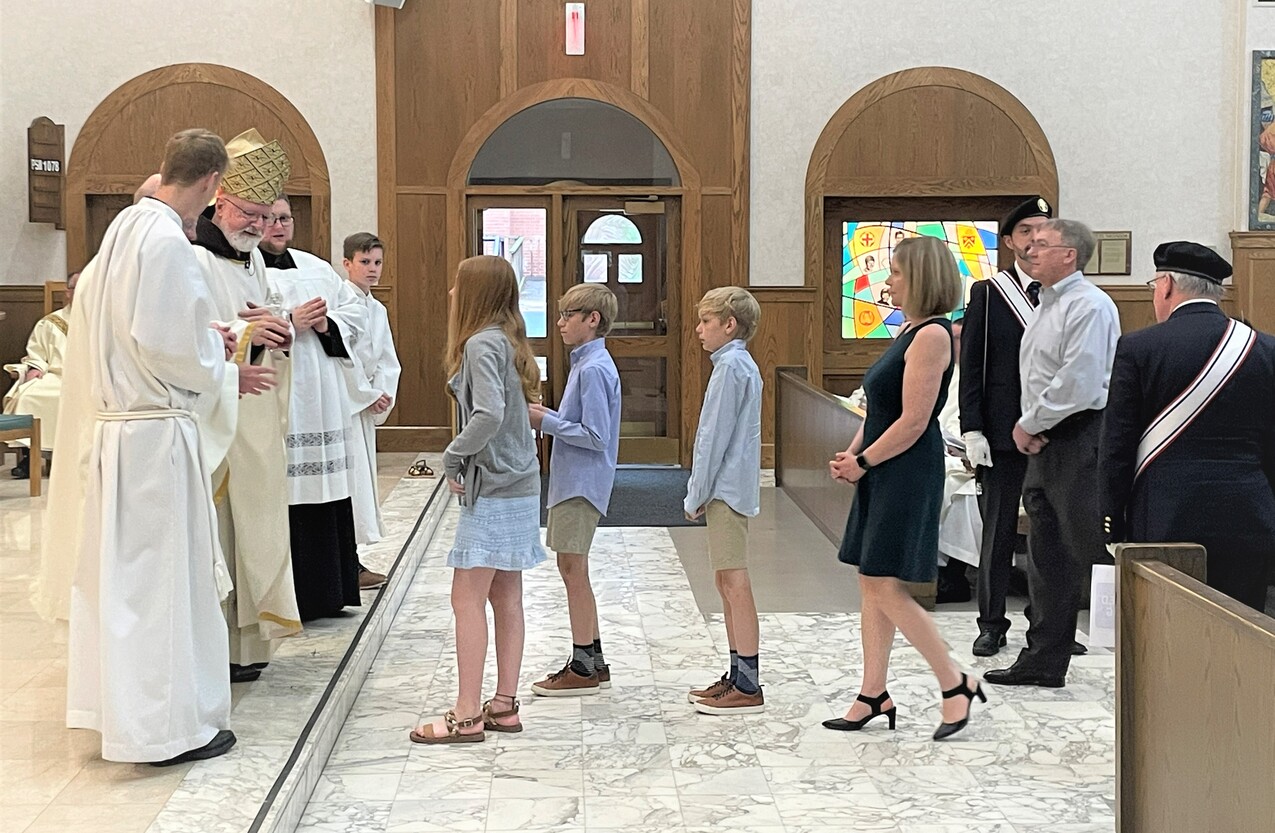 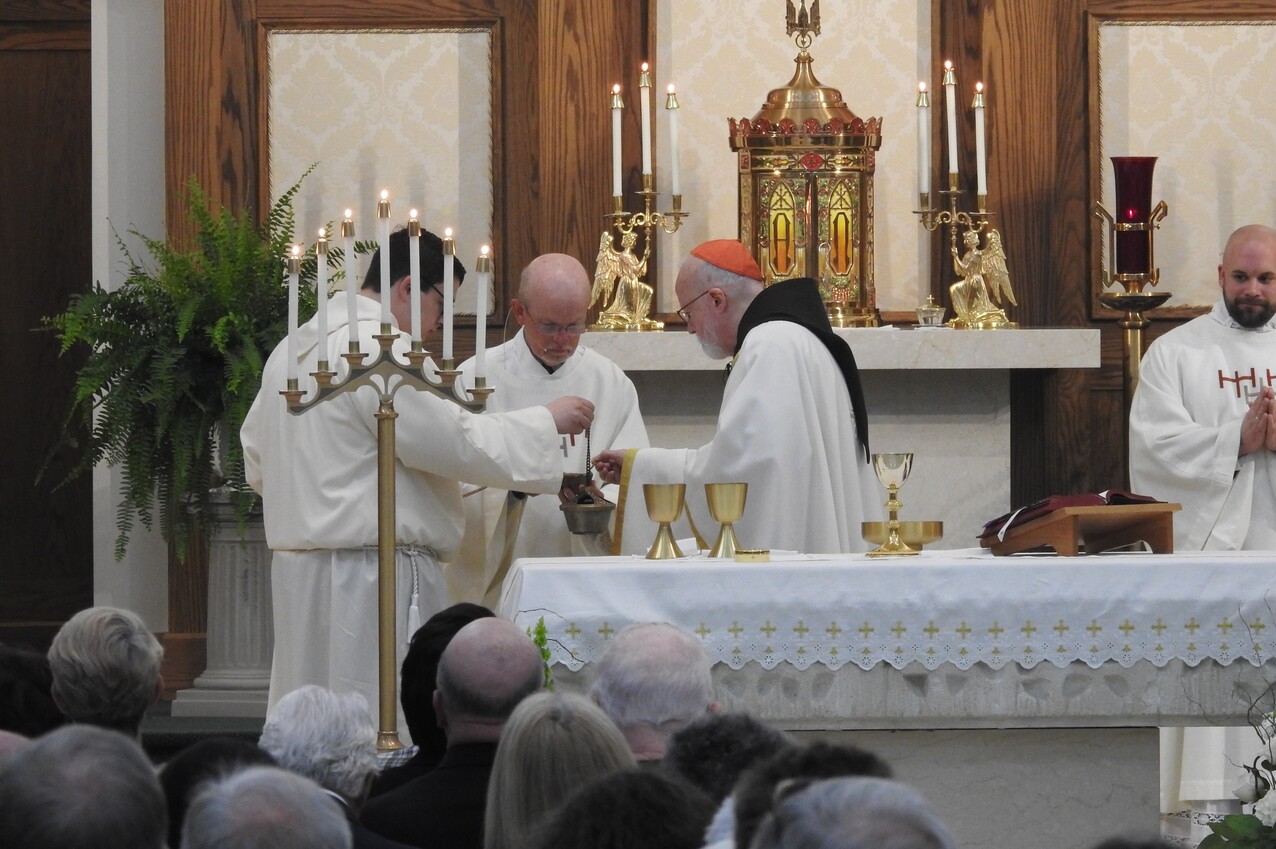 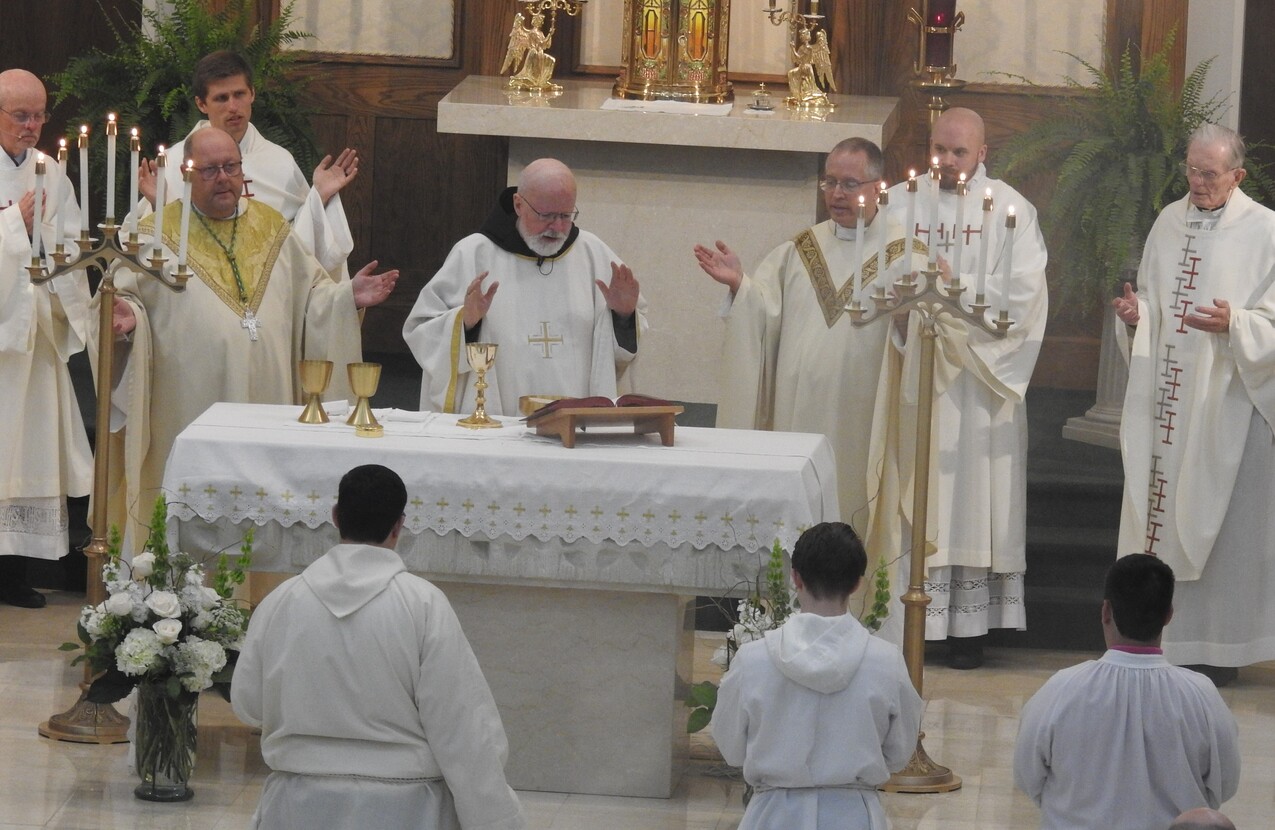 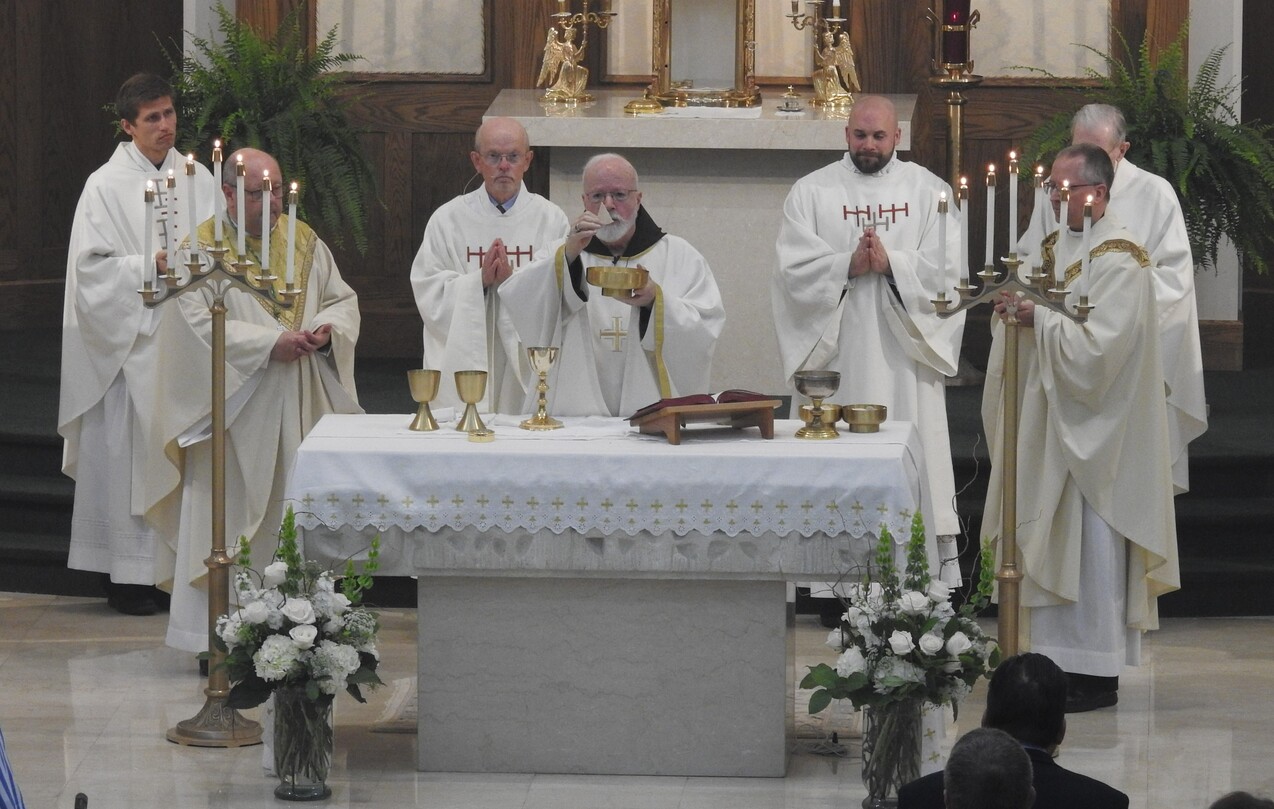 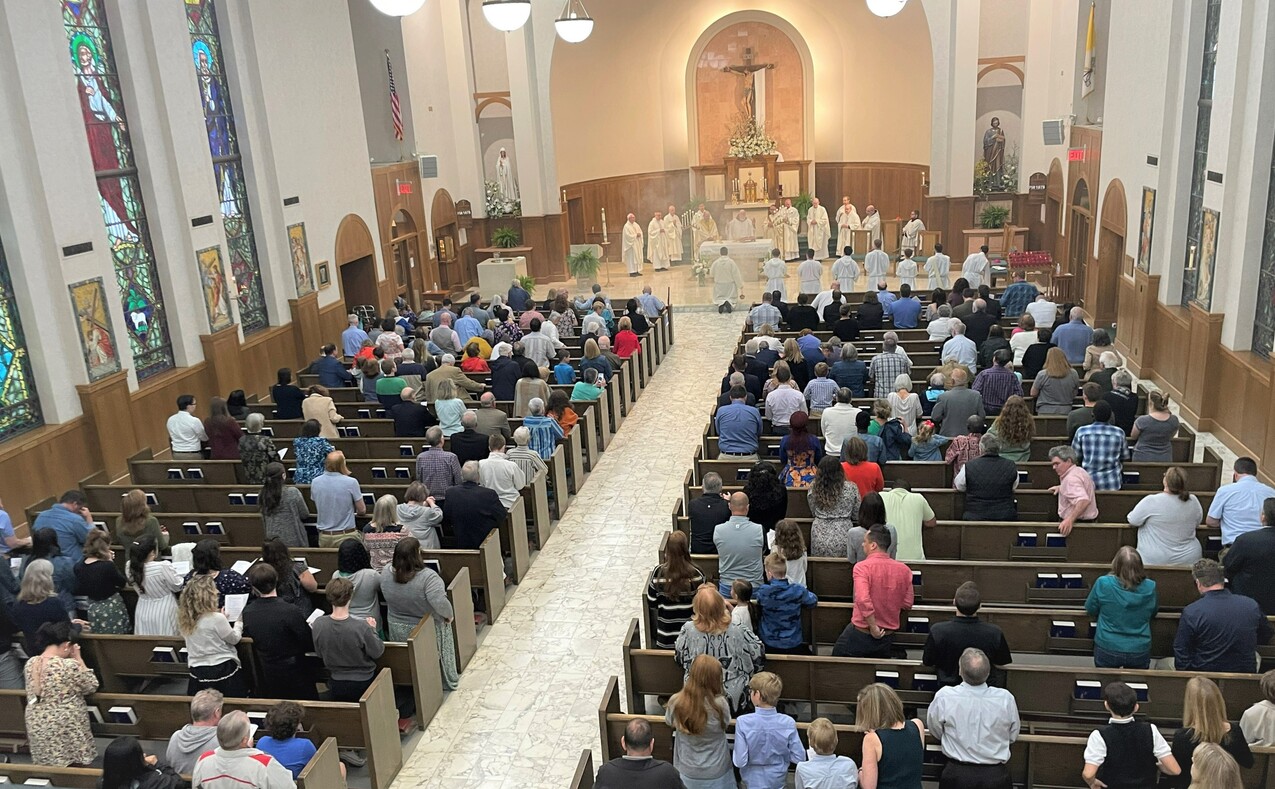 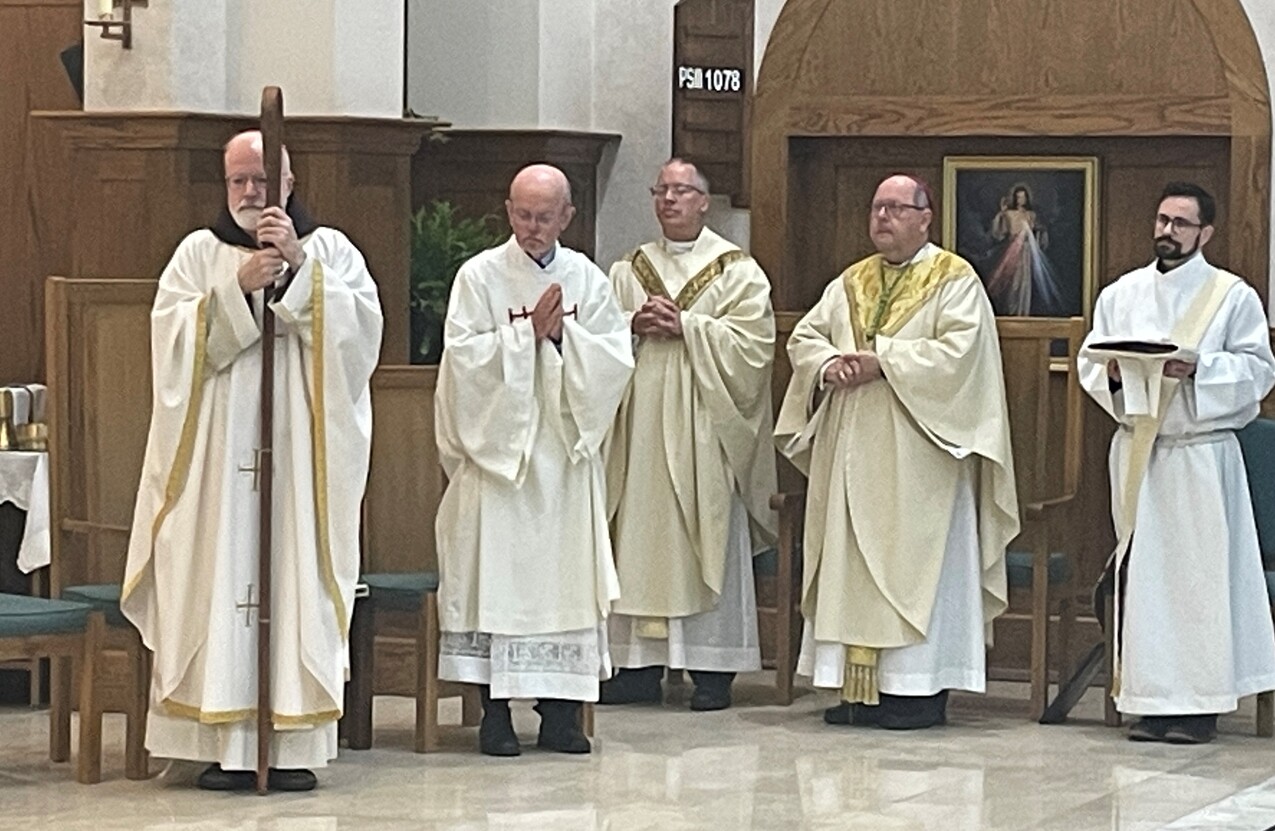 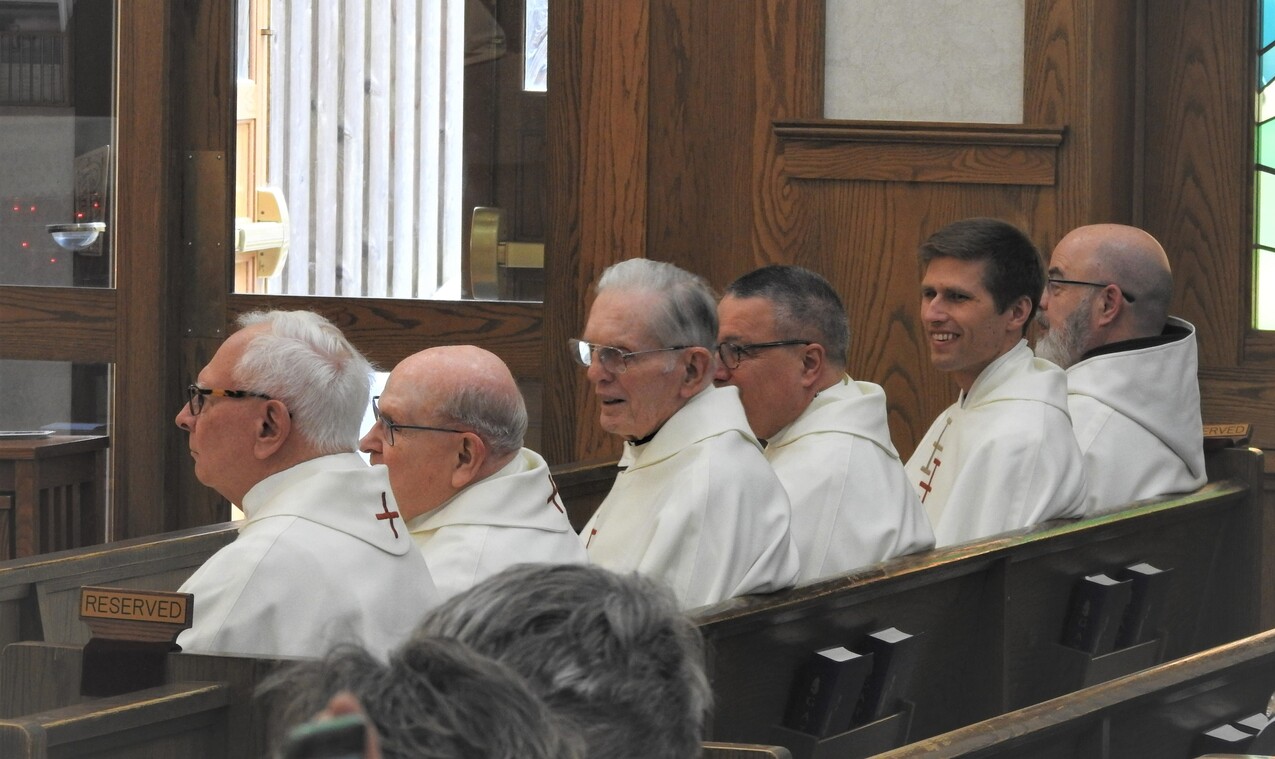 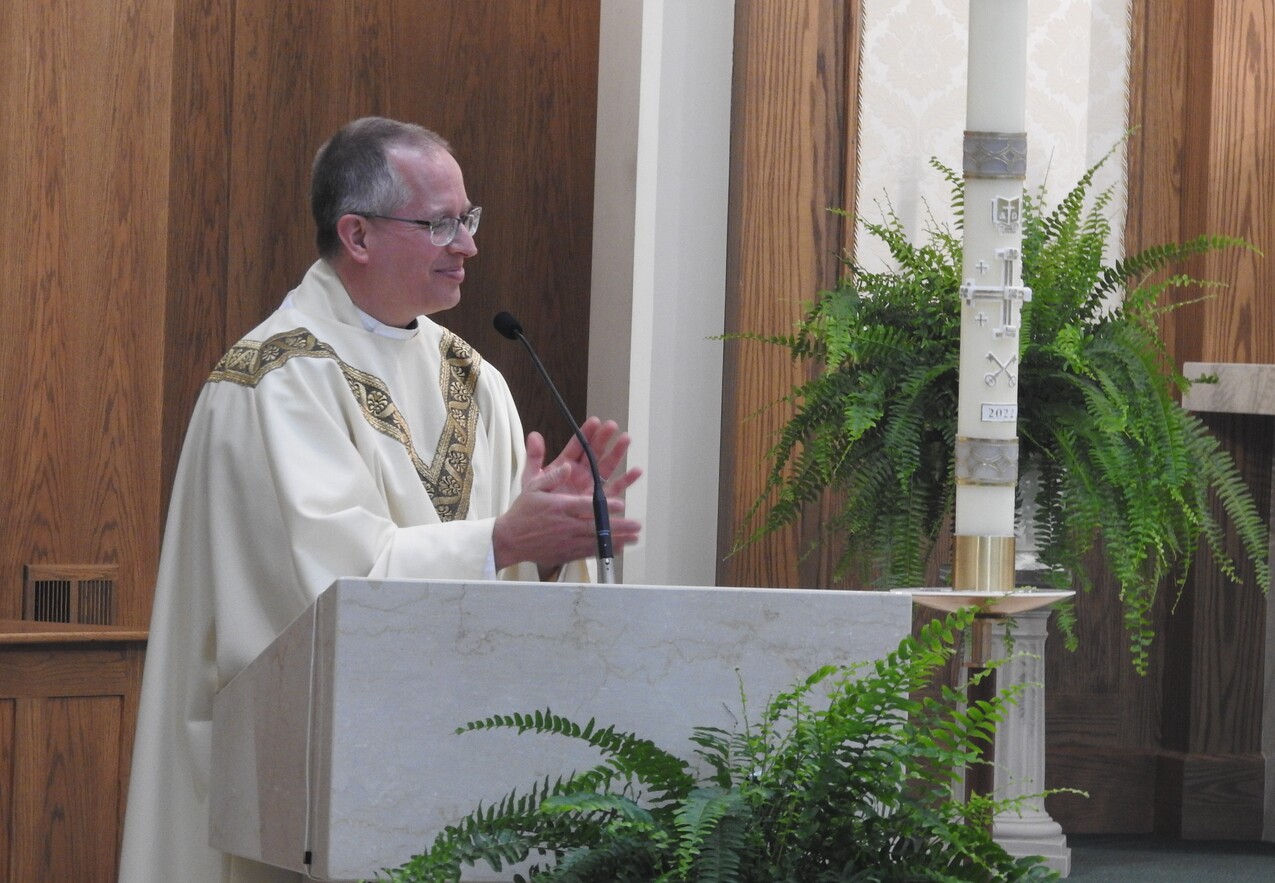 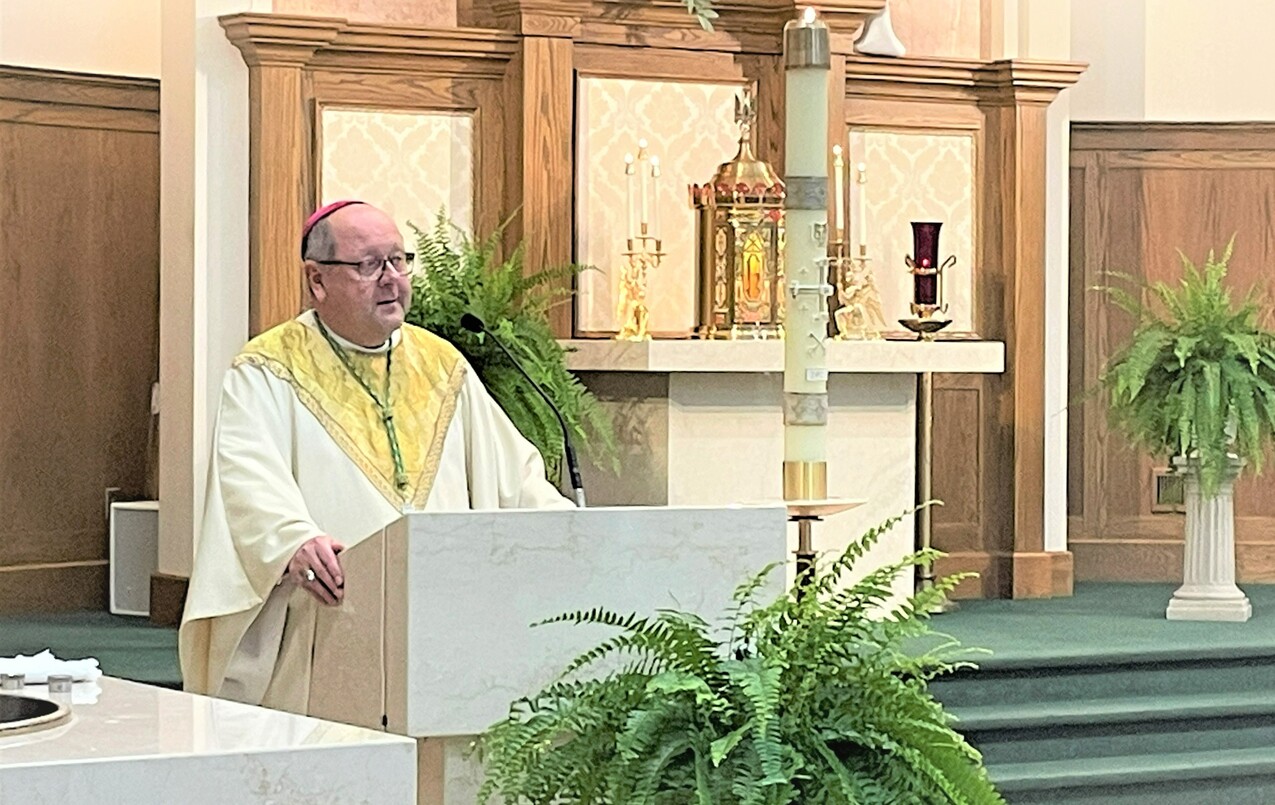 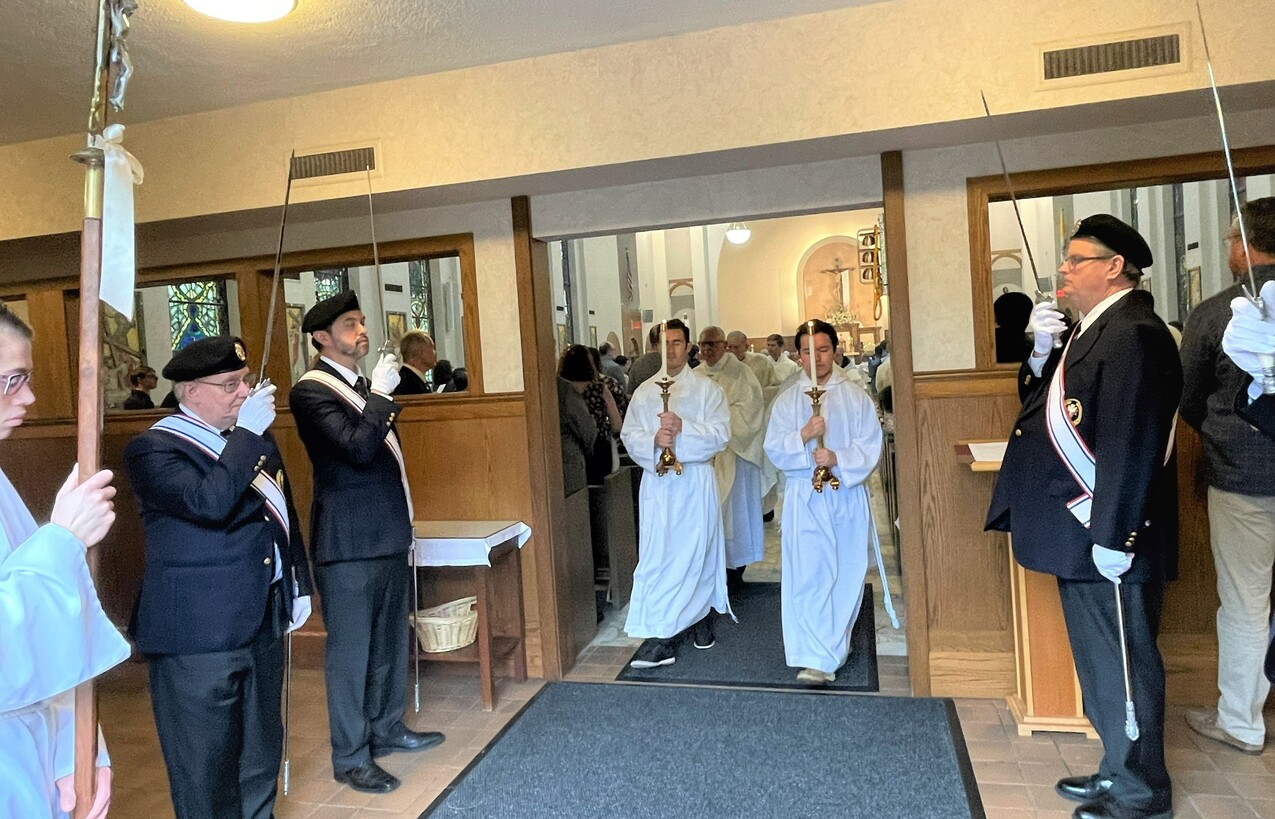 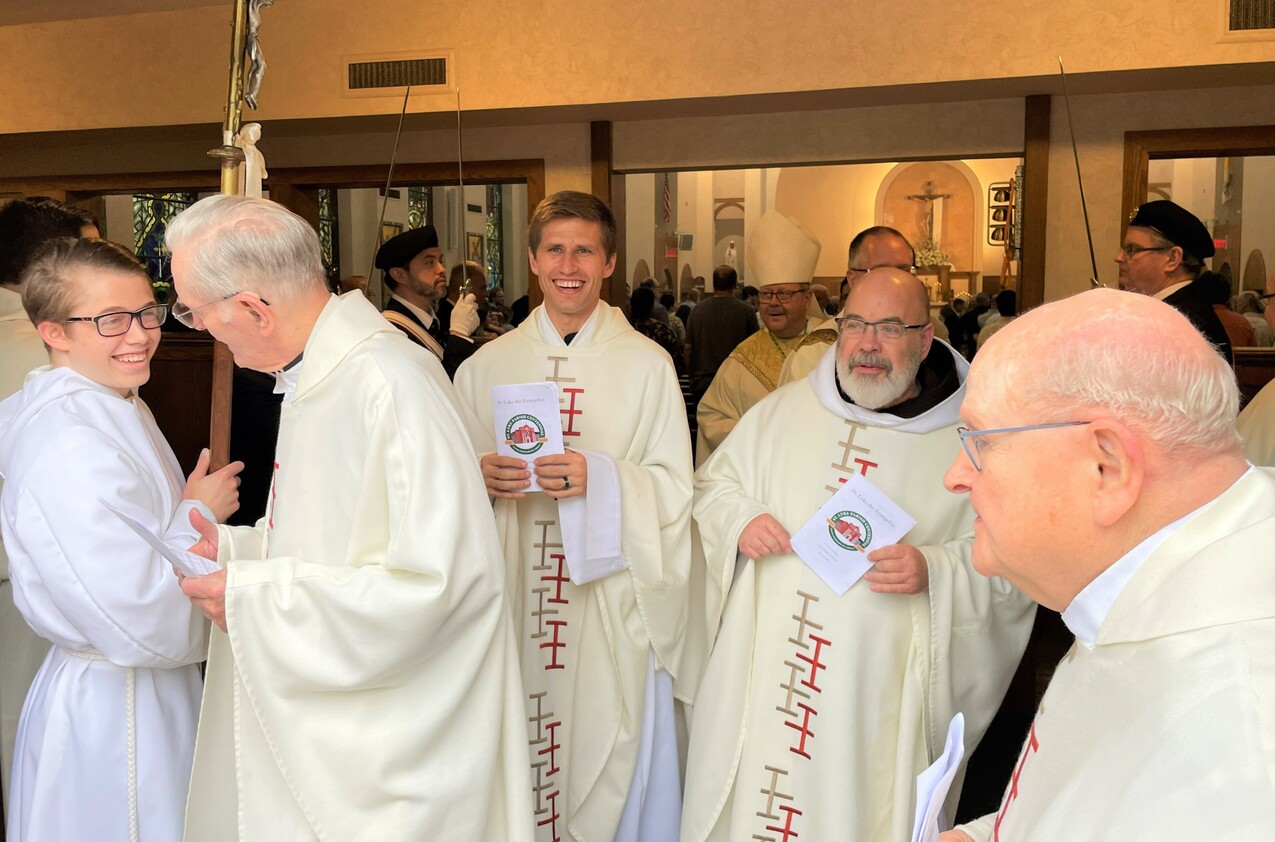 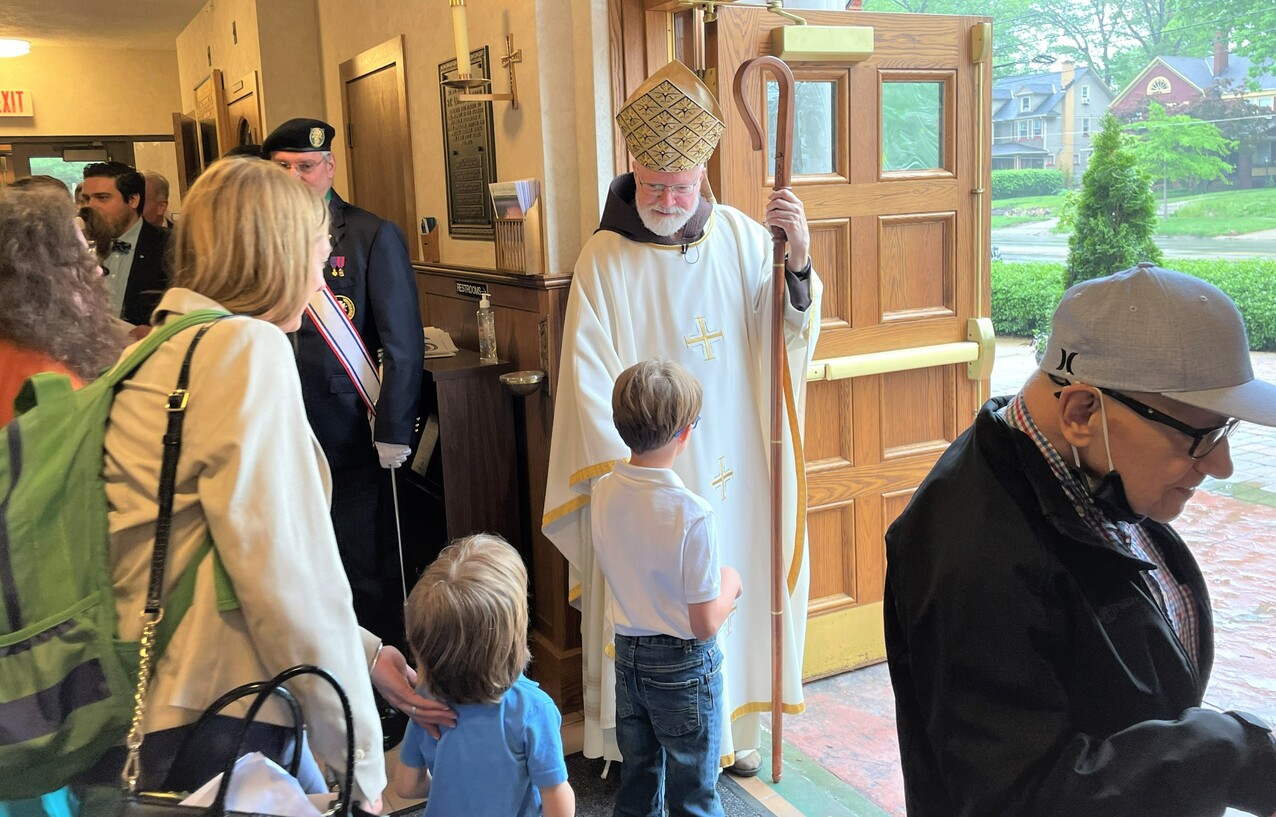 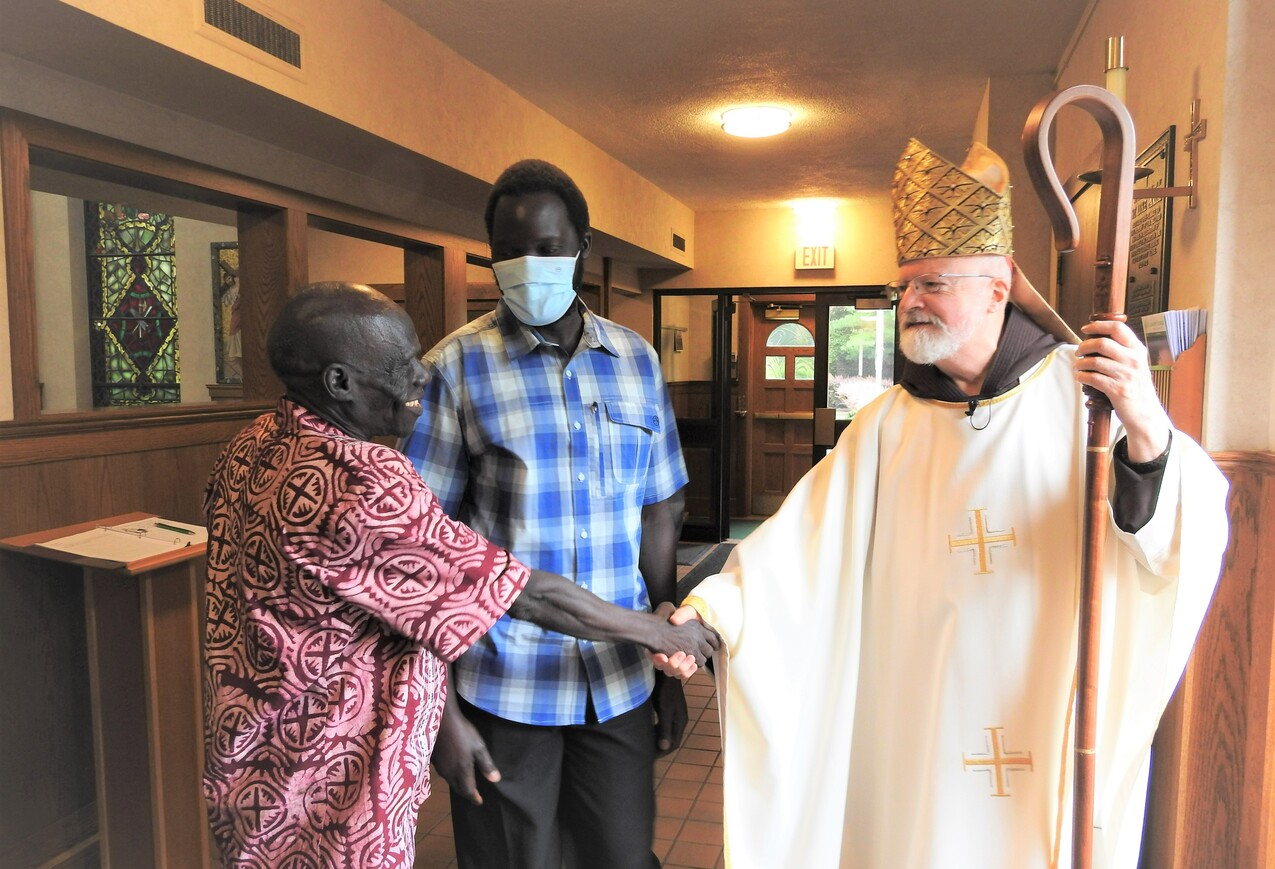 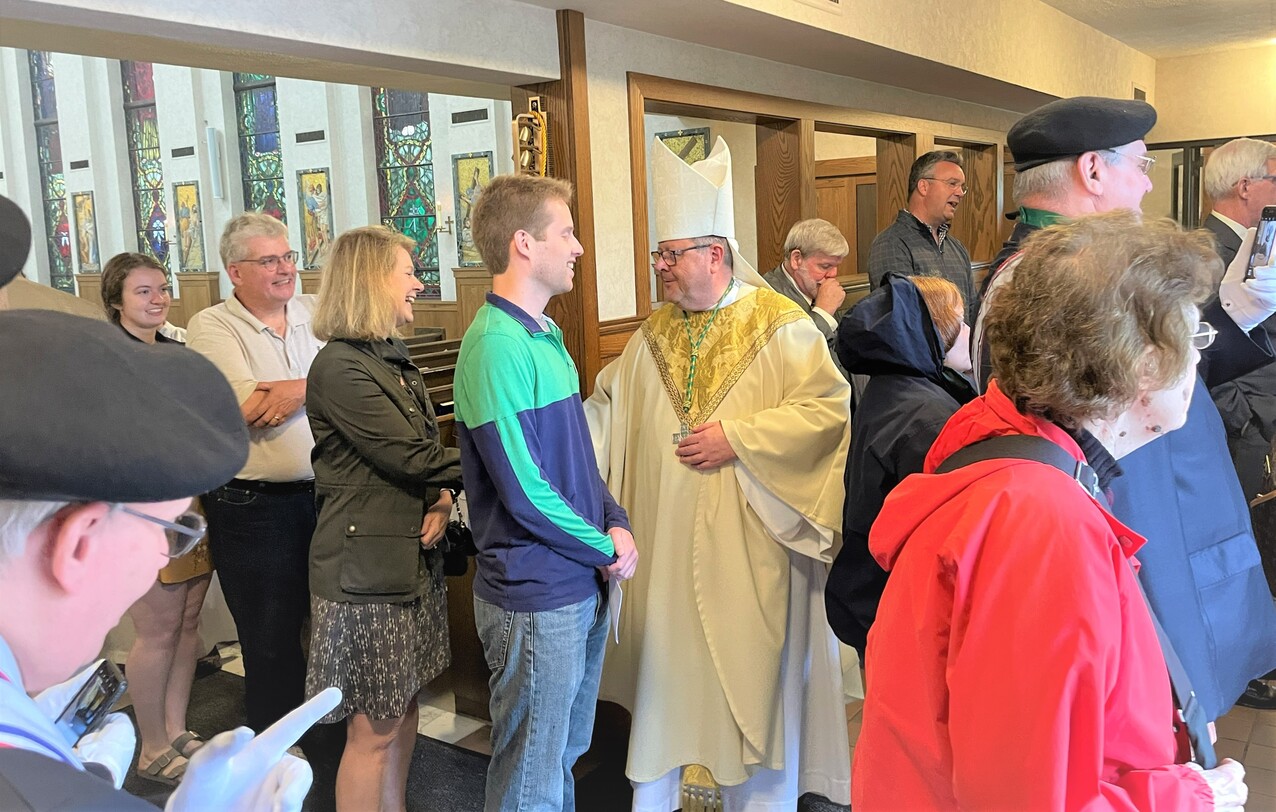 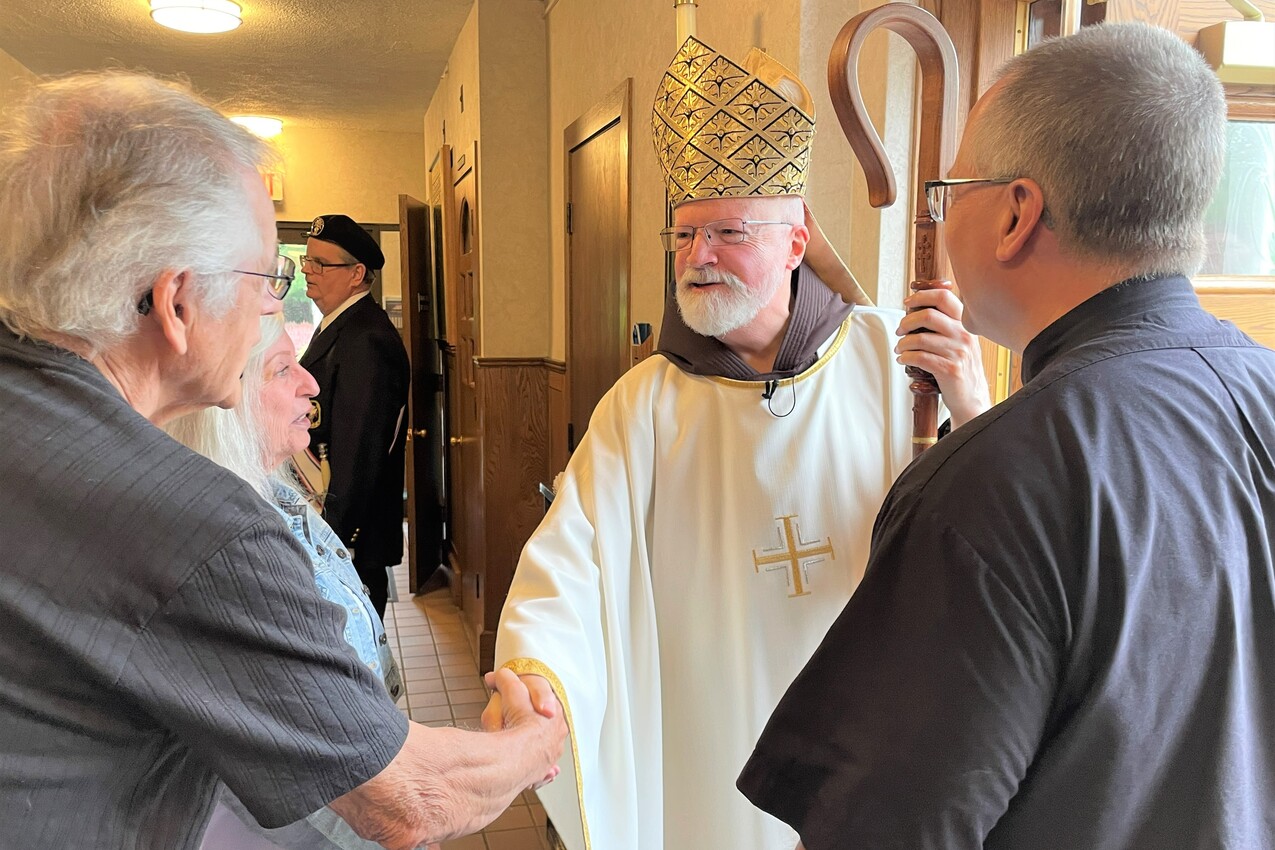 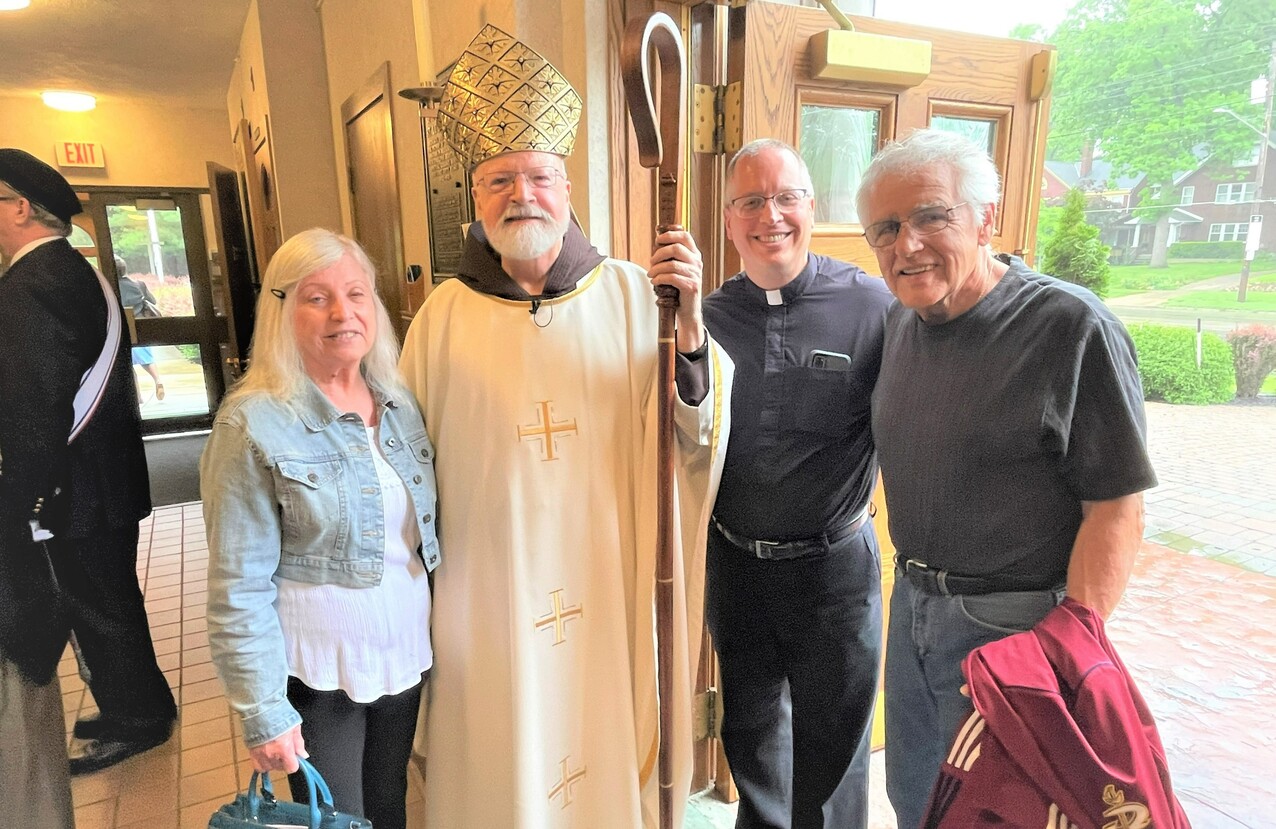 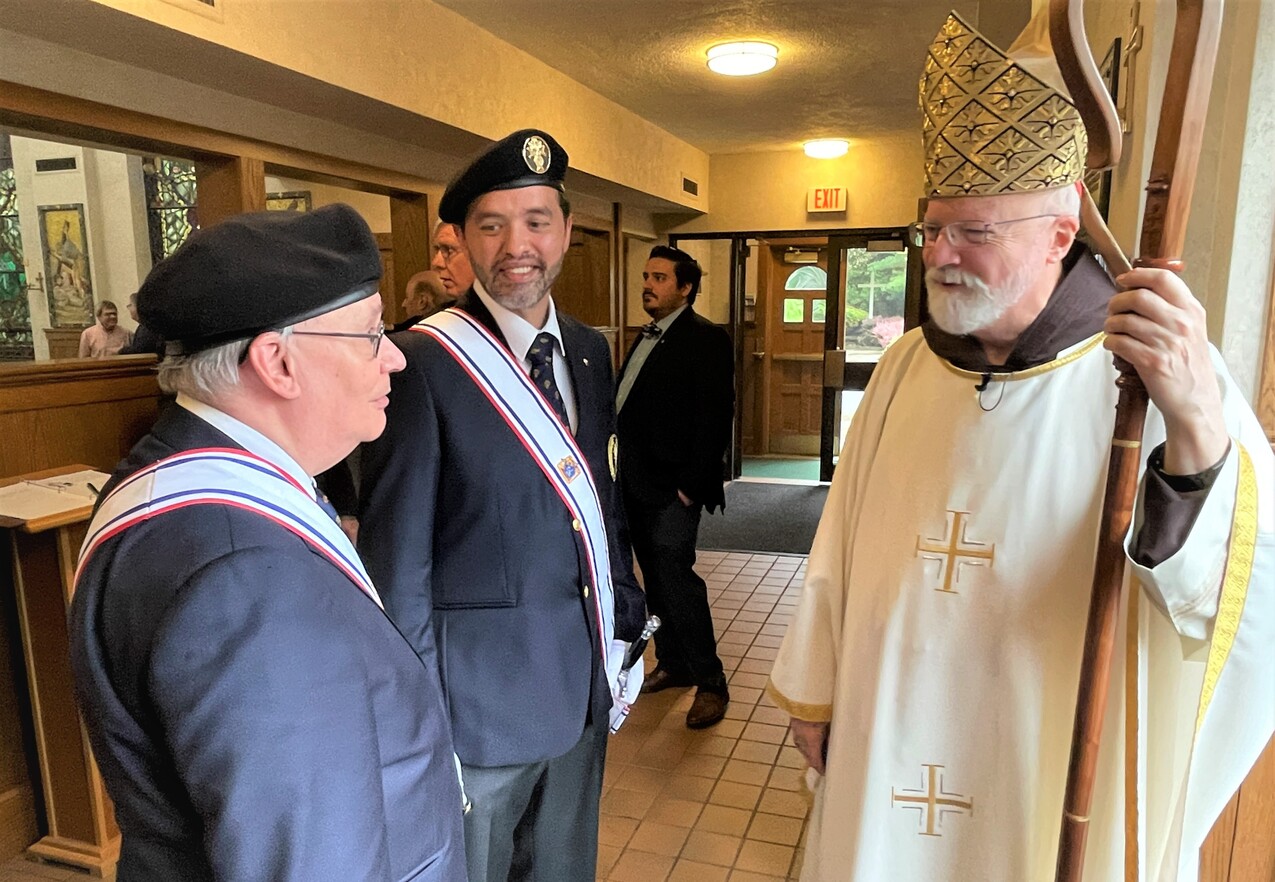 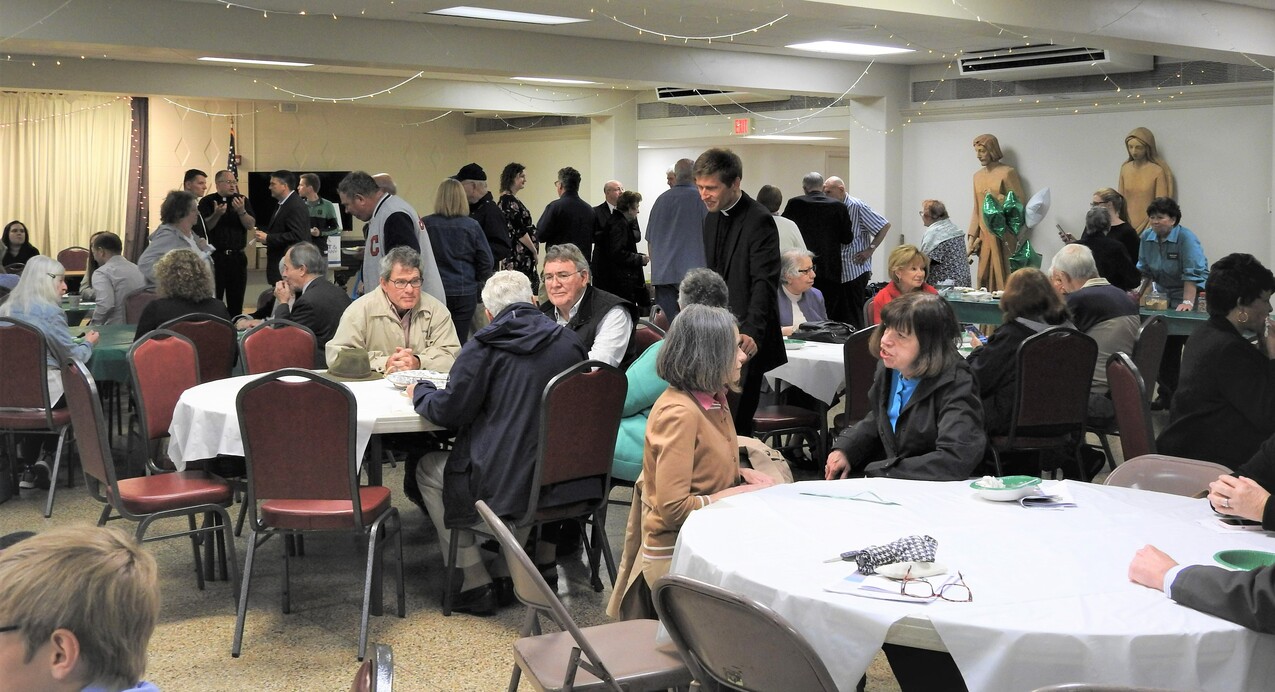 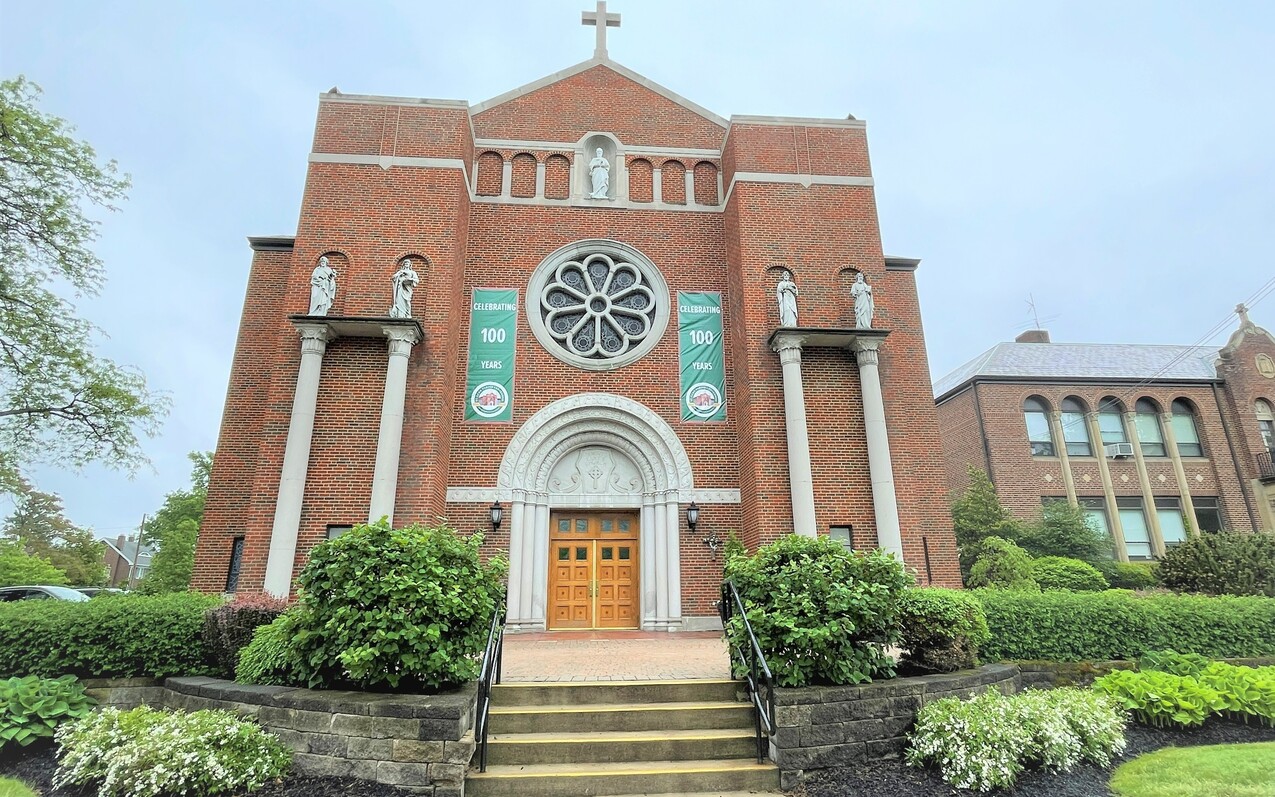 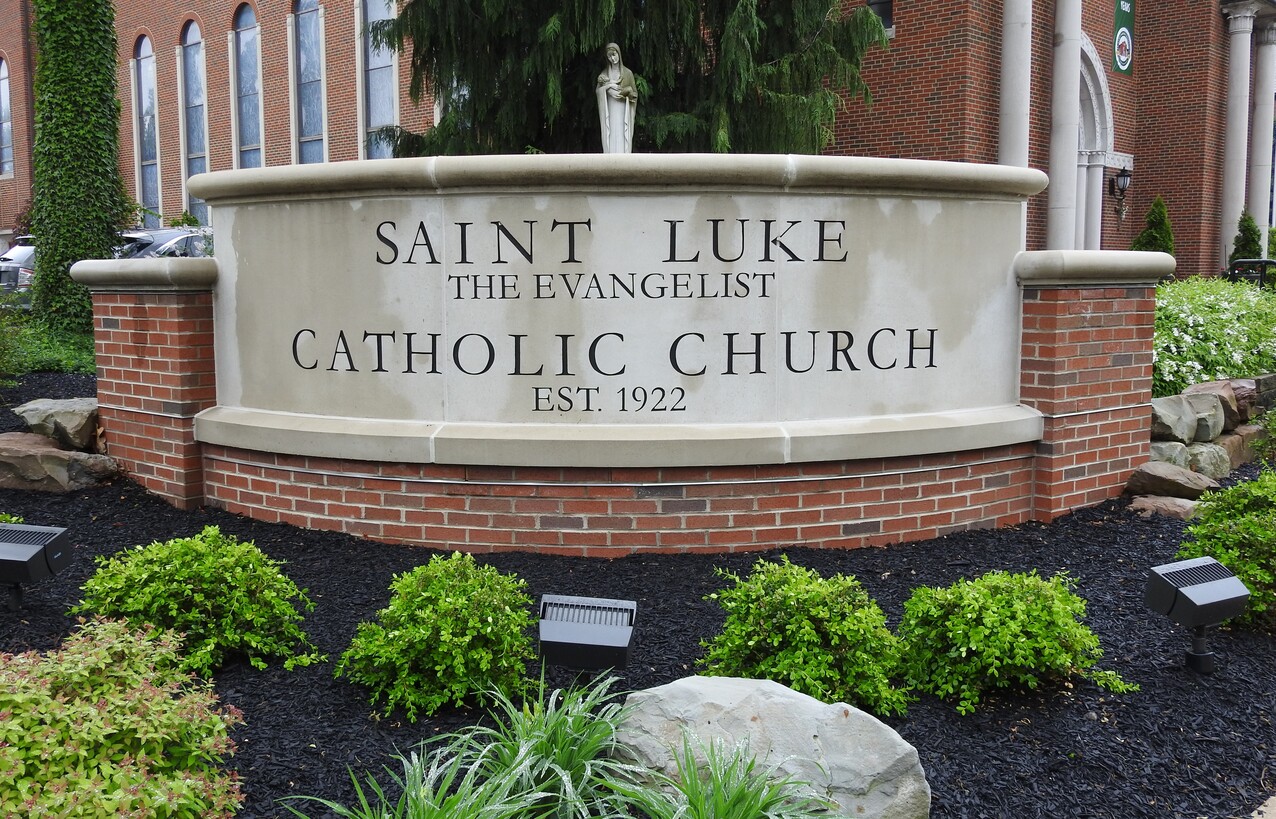 “I feel like the prodigal son returning to St. Luke after all these years,” quipped Cardinal Sean Patrick O’Malley, OFM Cap.

The cardinal archbishop of Boston was back in his hometown of Lakewood on May 22 to help his boyhood parish, St. Luke the Evangelist, celebrate its 100th anniversary.

The cardinal recalled his childhood at St. Luke’s, including serving Mass. He entered the Franciscans at about age 19. “In those days, when you went into religious life, you really went,” he said, explaining that contact with his family and friends was limited.

Before the church was renovated, the cardinal said he remember that there was a mural behind the altar. “It was controversial. I loved it, but some of the priests, not so much,” he quipped.

In the Gospel, the cardinal said Jesus assures us he will never leave us. Although he “left” after Holy Thursday, he rose from the dead and returned to us. He left again at the Ascension, but he remains with us. Cardinal O’Malley said Jesus gave us a “farewell speech” and gave himself to us sacramentally at the Last Supper, which was the first Mass and the first Eucharist.

“Jesus loves us, even if we’re in sin. He demands that we learn to love, to forgive. Jesus loves us to the end, to the extreme, and he makes himself a gift in the Eucharist,” the cardinal said. “His farewell gift to us at the Last Supper was the Eucharist.” He said Jesus asked his Father that we may be one and love each other. “The measuring stick for our love of others is the way Jesus loved us.”

Before his ascension, Jesus gave us a new commandment, the cardinal said. “He said, “Go, make disciples of all men.” The disciples knew the Lord would guide them in this new charge, he added.

The Acts of the Apostles contains Luke’s Gospel, sometimes called the Gospel of the Spirit. “St. Luke tells us how to carry on,” he said. There are saints’ relics in St. Luke’s altar, the cardinal said, noting their sacrifices – and those of more recent martyrs like the four churchwomen murdered in El Salvador in December 1980, during that country’s civil war. The cardinal knew St. Oscar Romero, who was assassinated months before the women while he celebrated Mass. “May their martyrdom be an inspiration to us. May they be a reminder and an example to go and make disciples of all,” he said, noting St. Luke Parish recently added a memorial to the churchwomen, two of whom -- Ursuline Sister Dorothy Kazel and lay missionary Jean Donovan – were from the Diocese of Cleveland.

What occurred in the early Church is similar to the synodal process that is underway, he said.

“We are the new disciples. We gather in the breaking of bread. We gather joyfully to carry the Gospel to the ends of the earth – to be continued. Amen,” Cardinal O’Malley concluded.

Father Elbert thanked the cardinal for his presence at the centennial celebration. He also expressed his appreciation for the parishioners who work to make St. Luke’s a vibrant faith community and those who helped plan the centennial activities.

Lakewood Mayor Meghan George sent the parish a proclamation declaring May 22 St. Luke the Evangelist Day in the city.

Bishop Malesic also made some brief remarks after Mass. “It is a delight to be with all of you on this most special centennial occasion,” he said, thanking Cardinal O’Malley and Father Elbert, as well as the parishioners – past and present – who are the heart of the parish.

“St. Luke Parish has a long and storied history. So much has been done over the last century. Think of all the Masses, all the baptisms and first Communions, confirmations and weddings. Think of all the funerals and the people who have gone before us from this parish marked with the sign of faith. There is so much to celebrate, and in 2022 so much to look forward to,” the bishop said.

“Today, this parish remains a beacon of light and hope here at the corner of Clifton Boulevard and Bunts, reflecting the light and hope of Jesus Christ,” he added. “We celebrate the past and we embrace the future, ensuring that the faithful of St. Luke Parish dedicate themselves to Jesus Christ in service to his Church. Your parish mission statement says it all: “Each one of us is called to be a witness to Christ as we seek to encounter and foster community among all God’s people through prayer, education, service and hospitality.”

The bishop concluded saying, “Thanks to all of you -- everyone who had and continues to have any part in keeping this wonderful house of the Lord vibrant. May God bless you always for your faithfulness and resilience, and may the Lord keep St. Luke Parish bringing people to him and serving the needs of the community for many, many years to come.”

The celebration continued after Mass with an ice cream social in the parish’s McBride Hall.