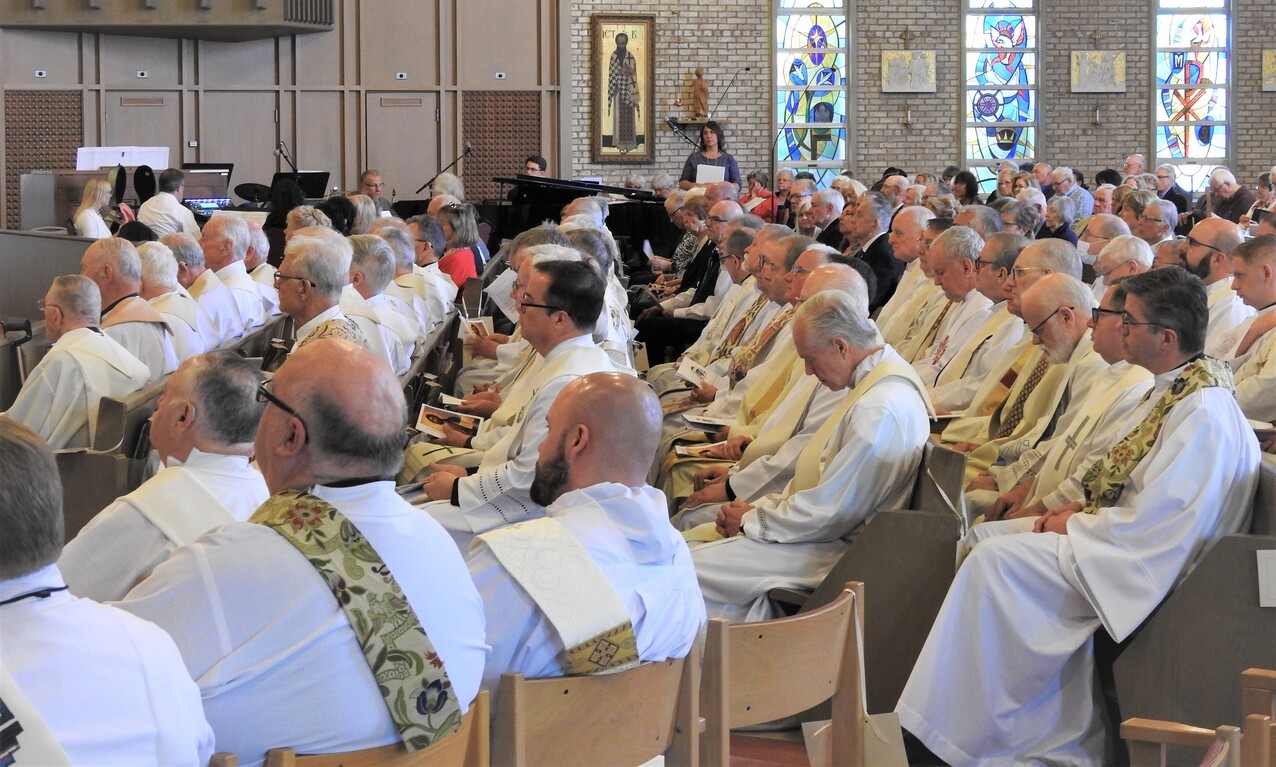 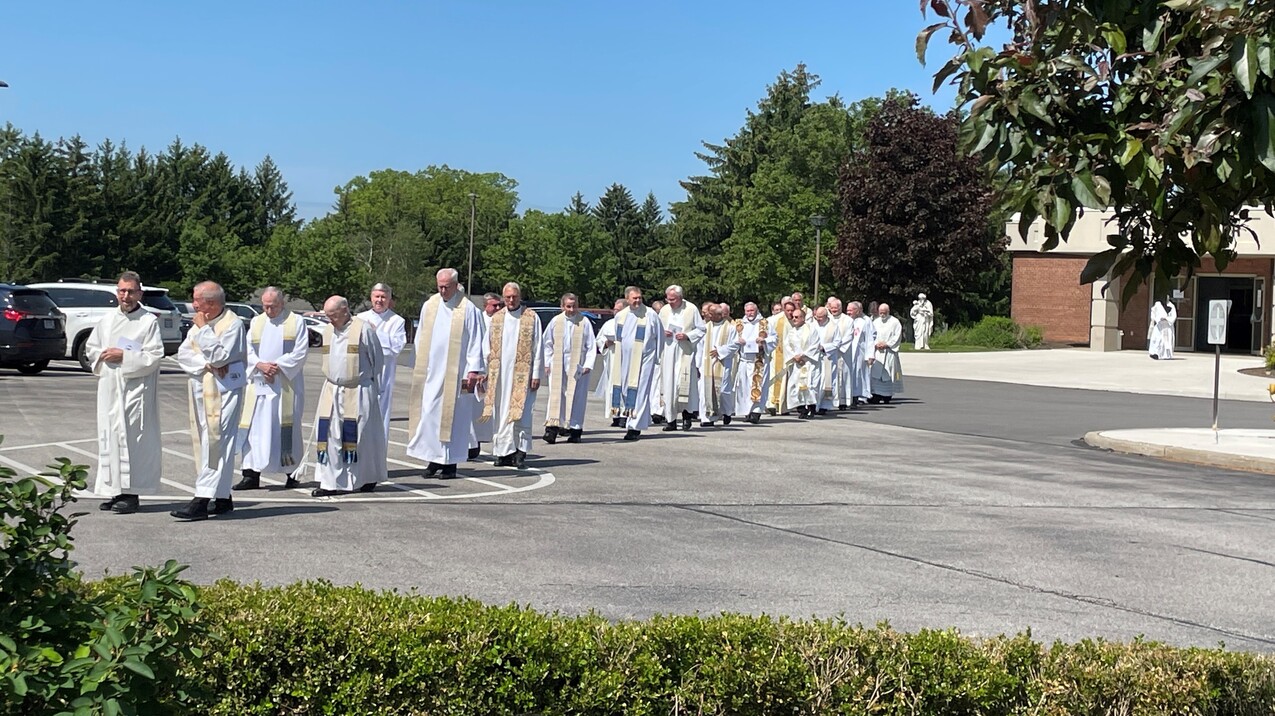 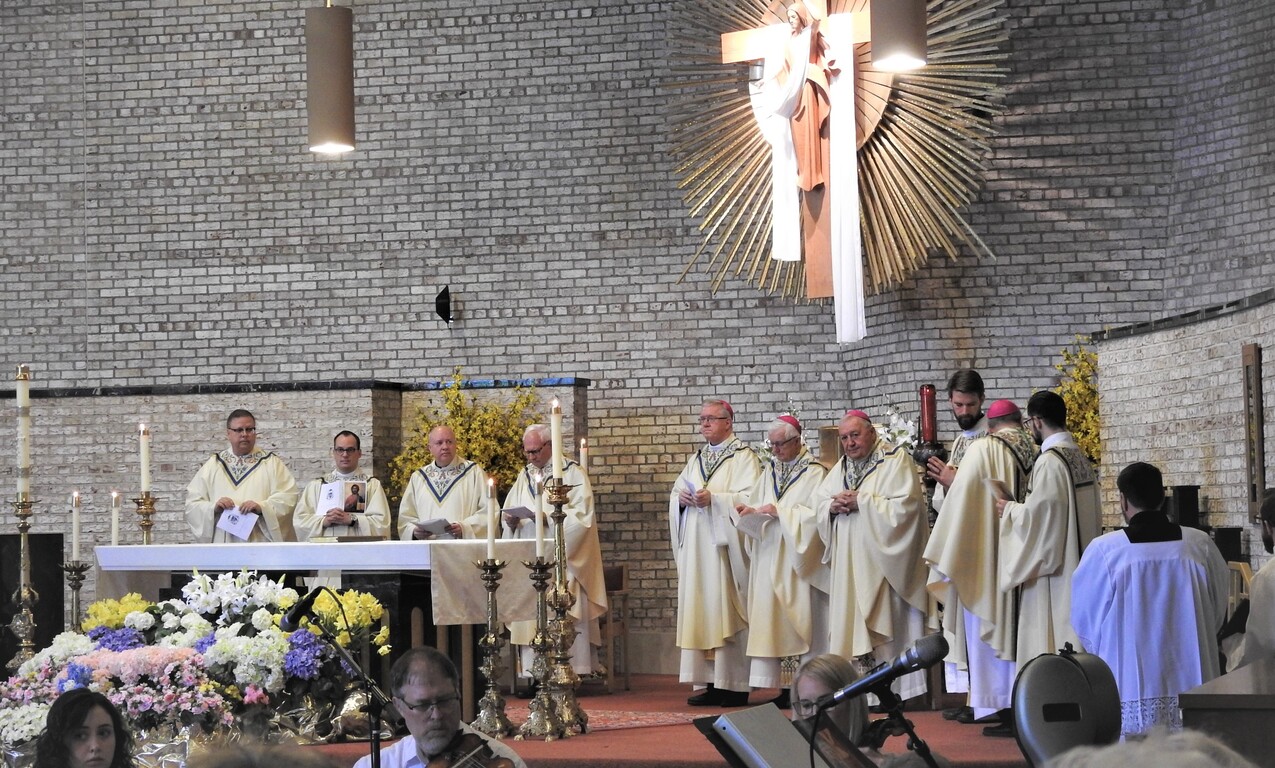 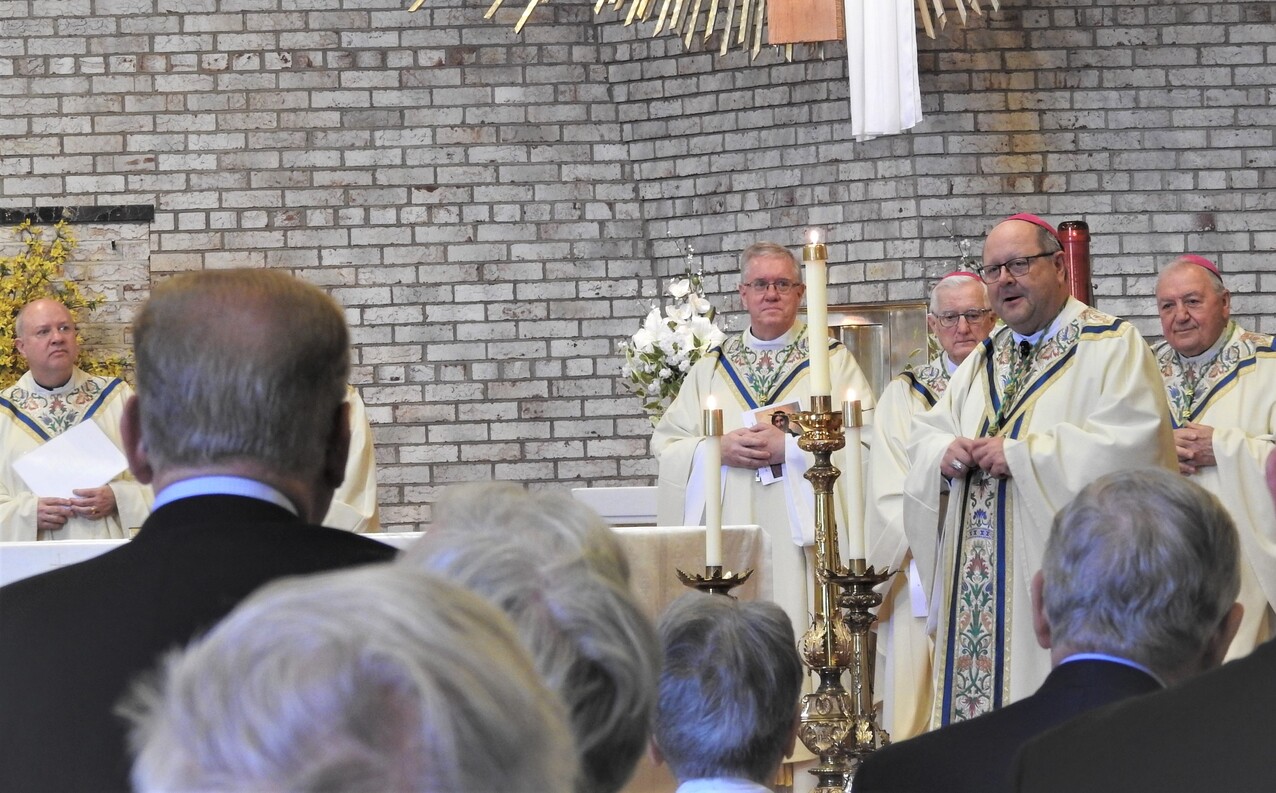 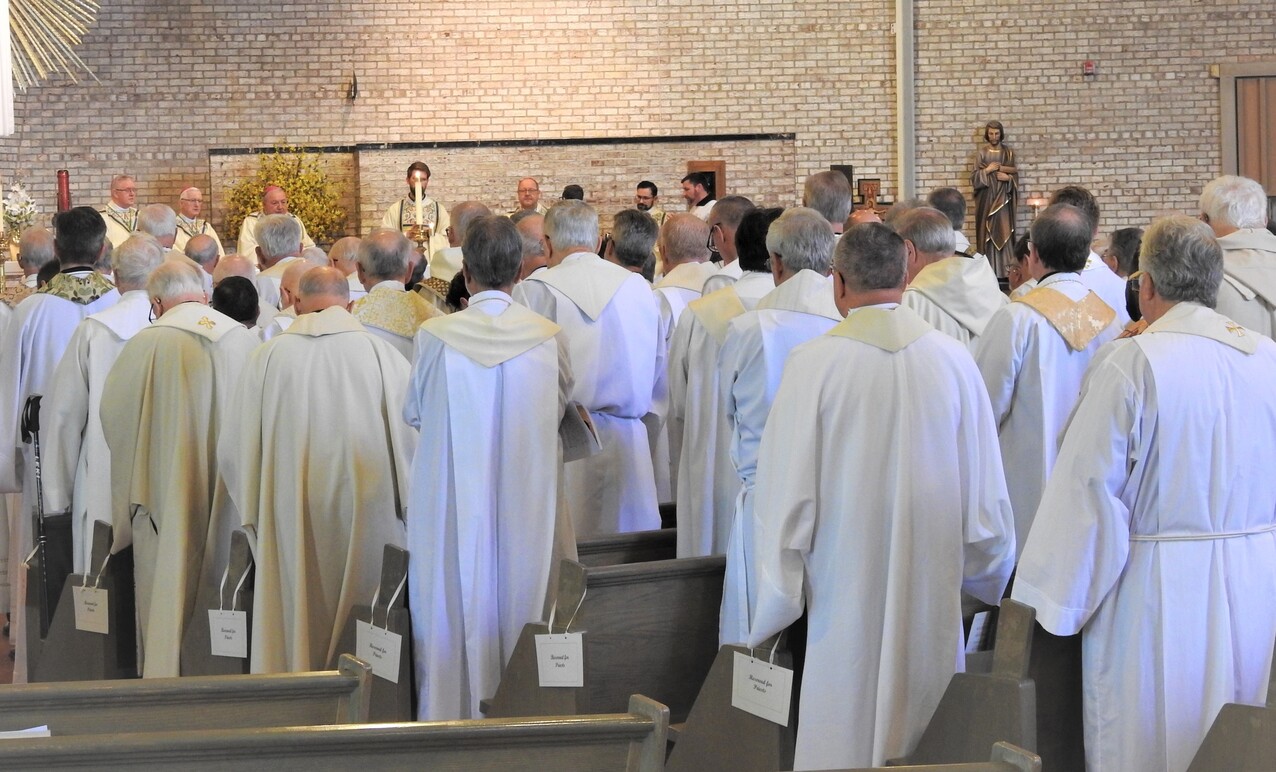 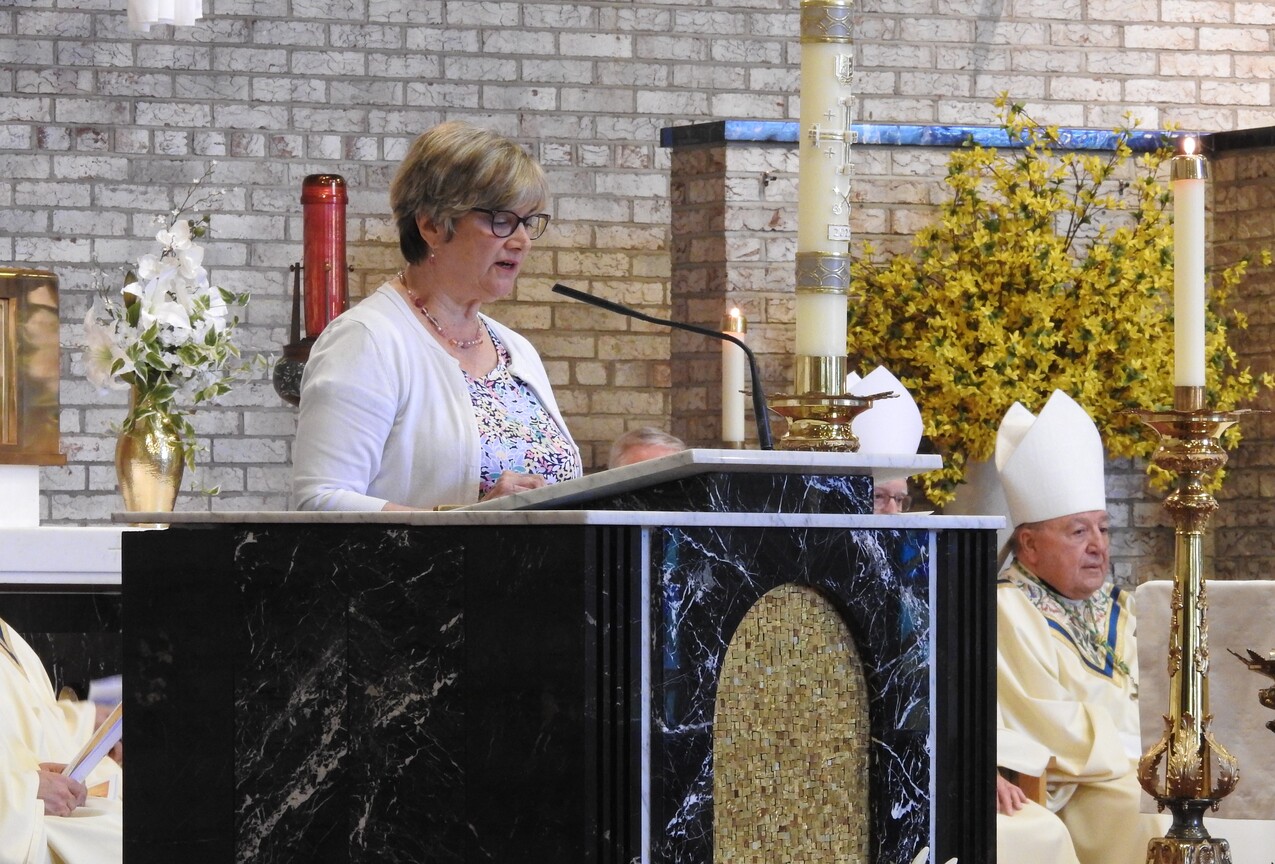 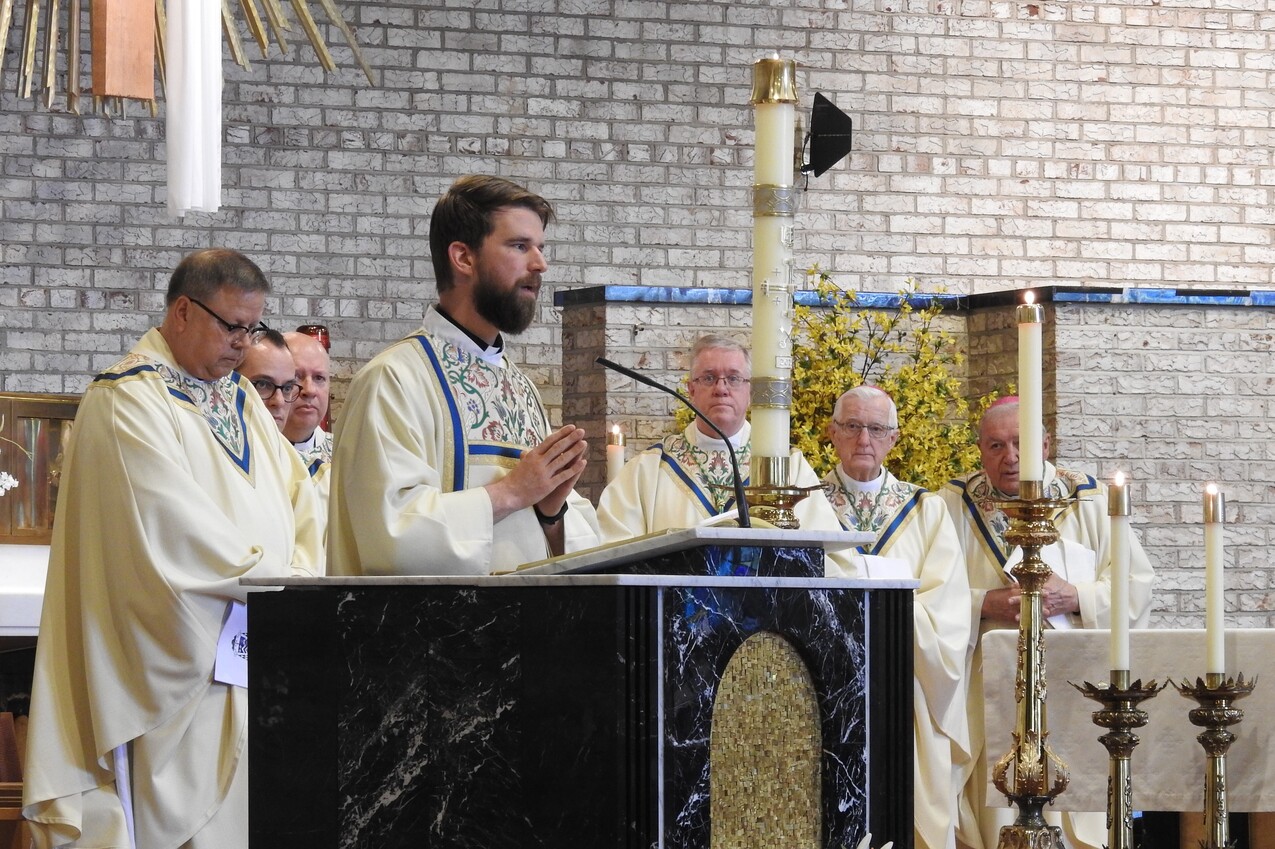 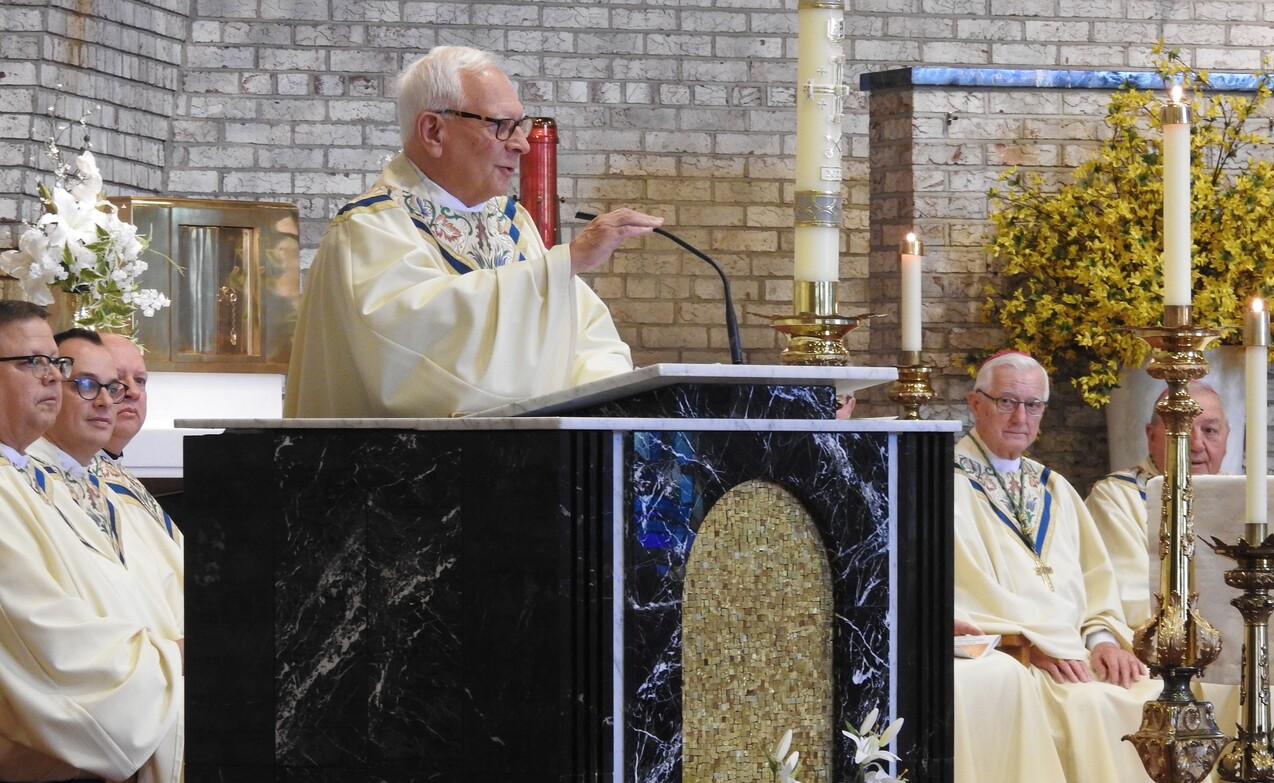 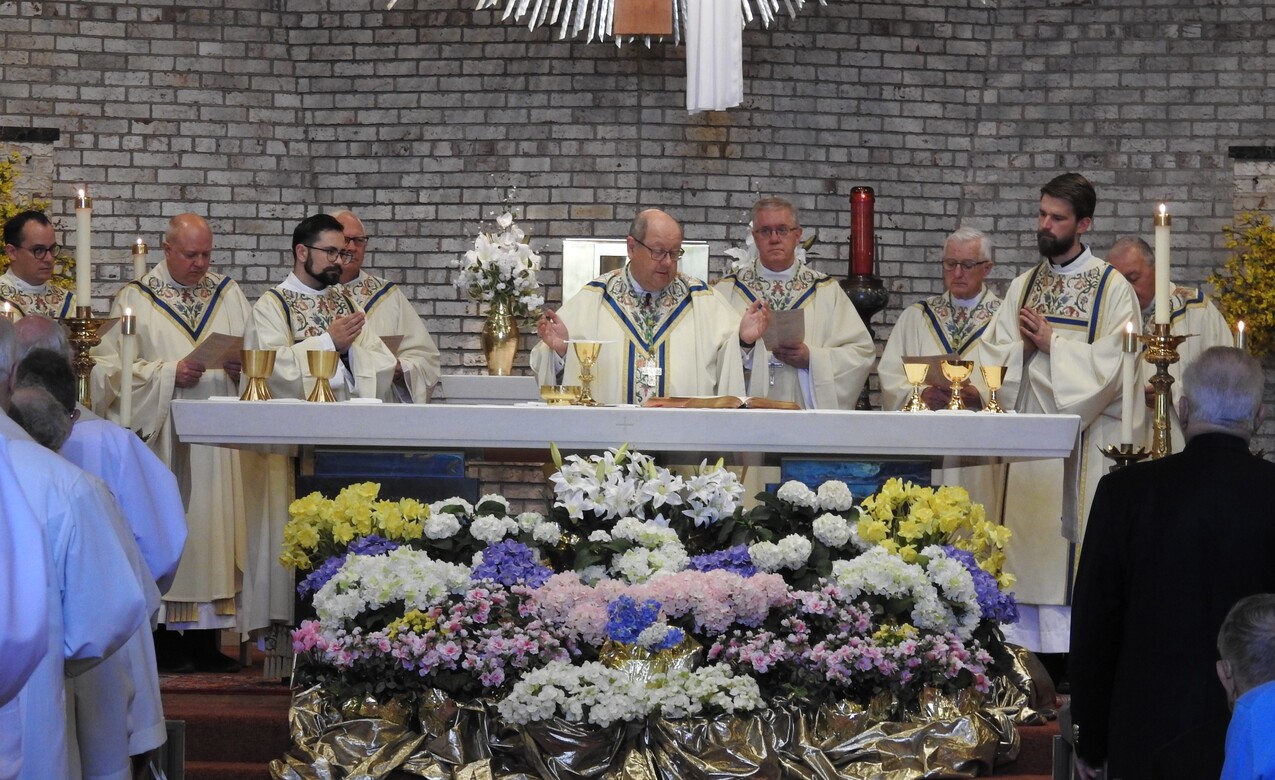 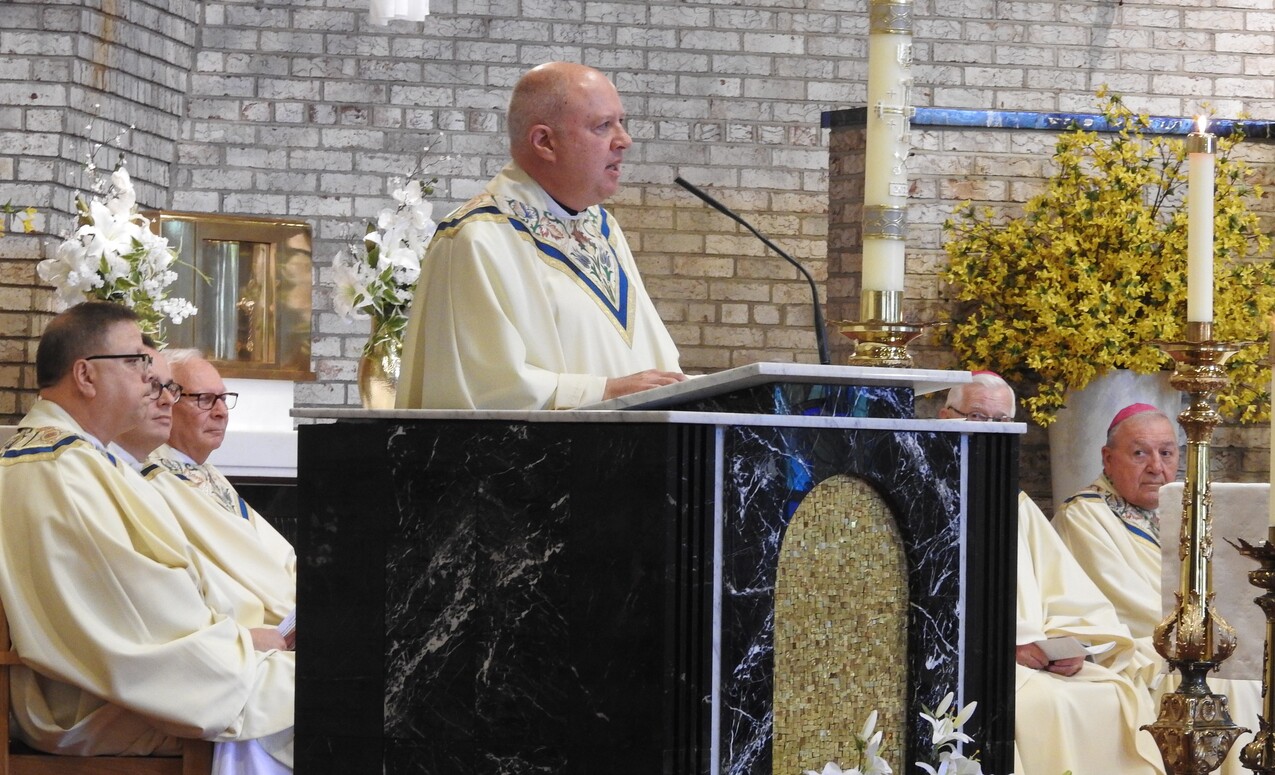 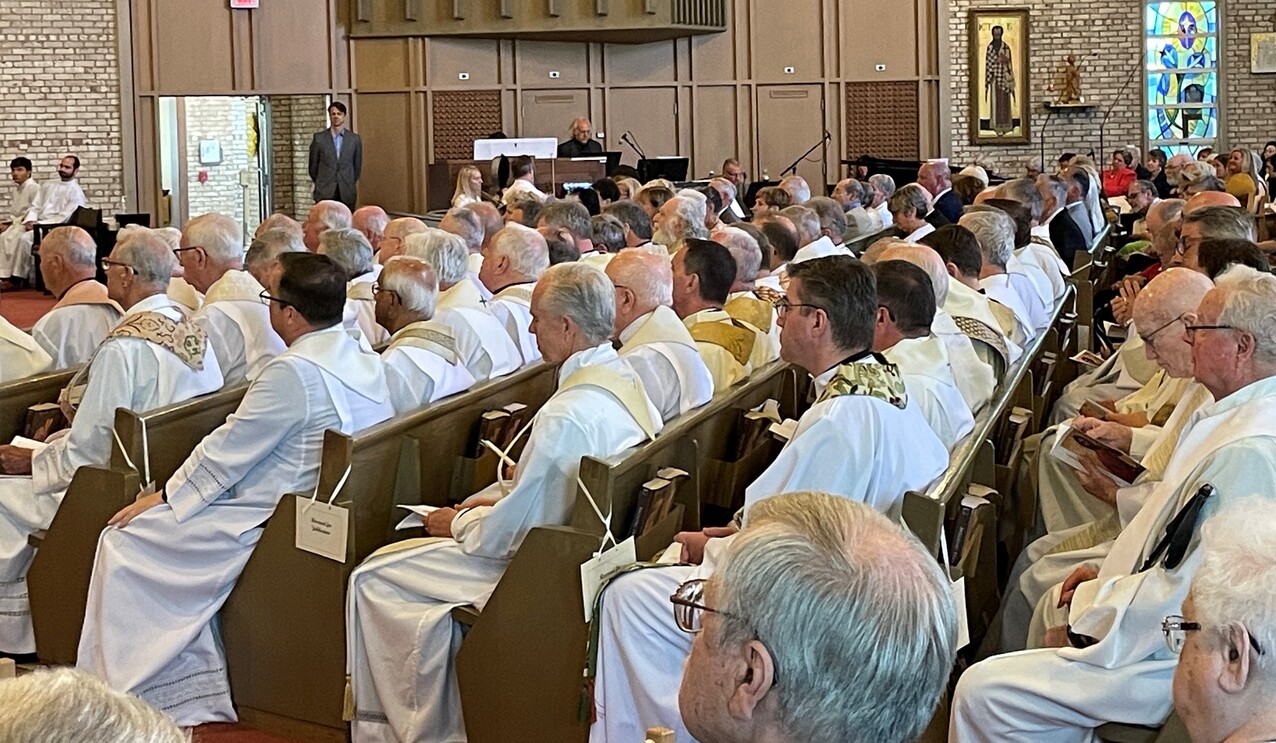 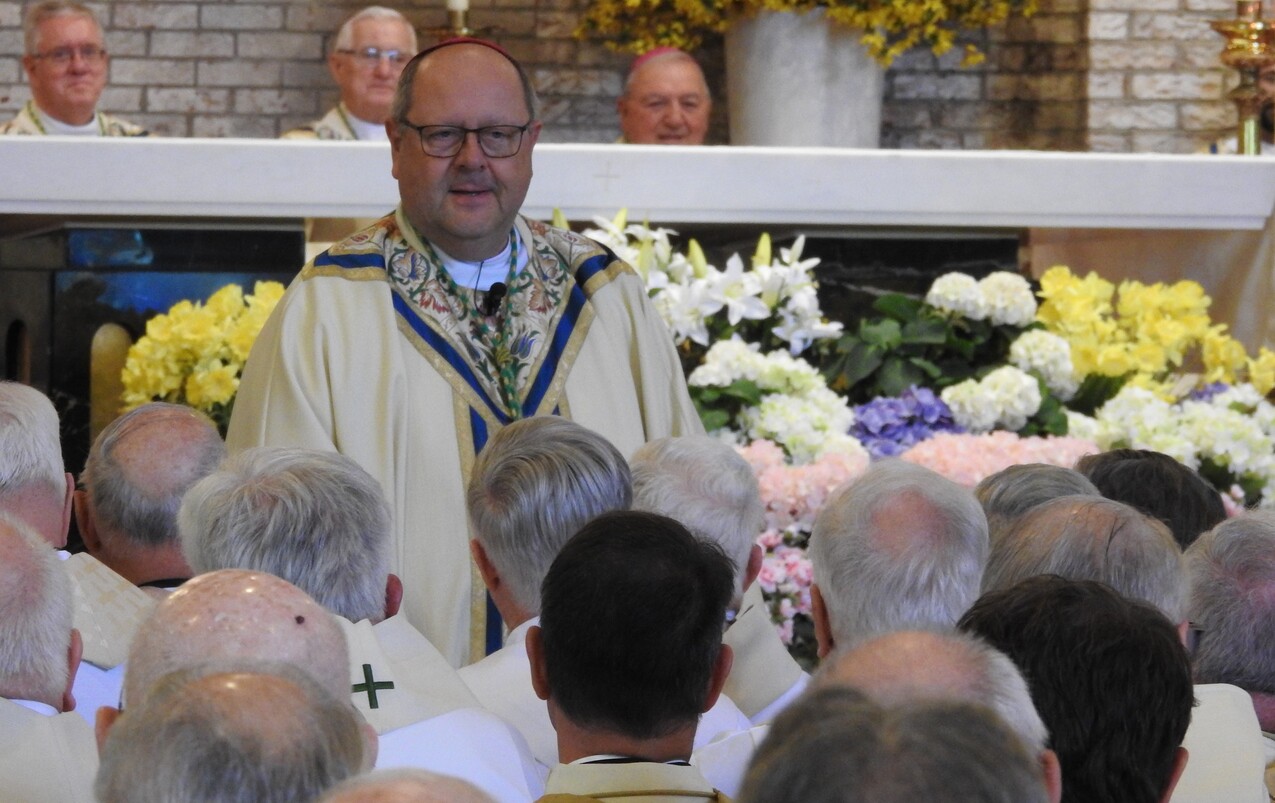 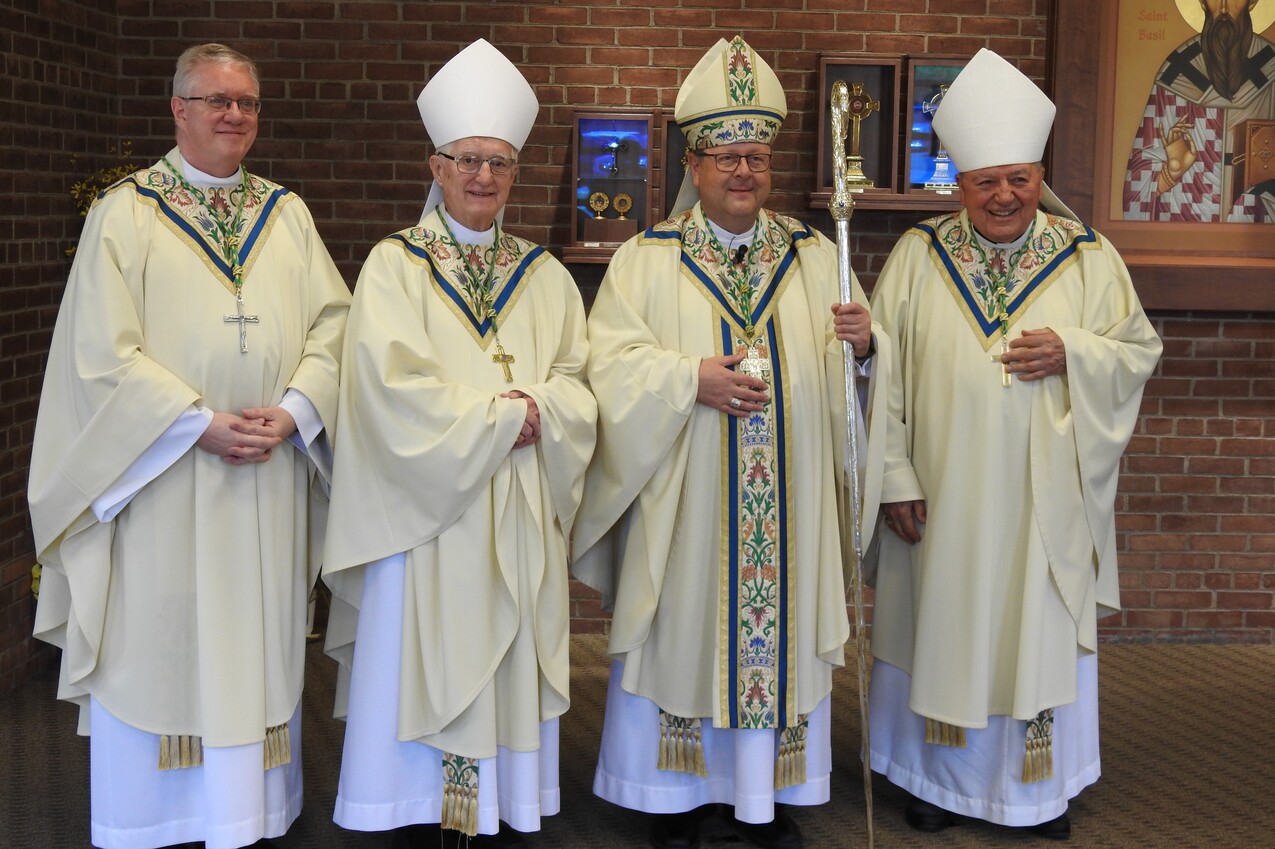 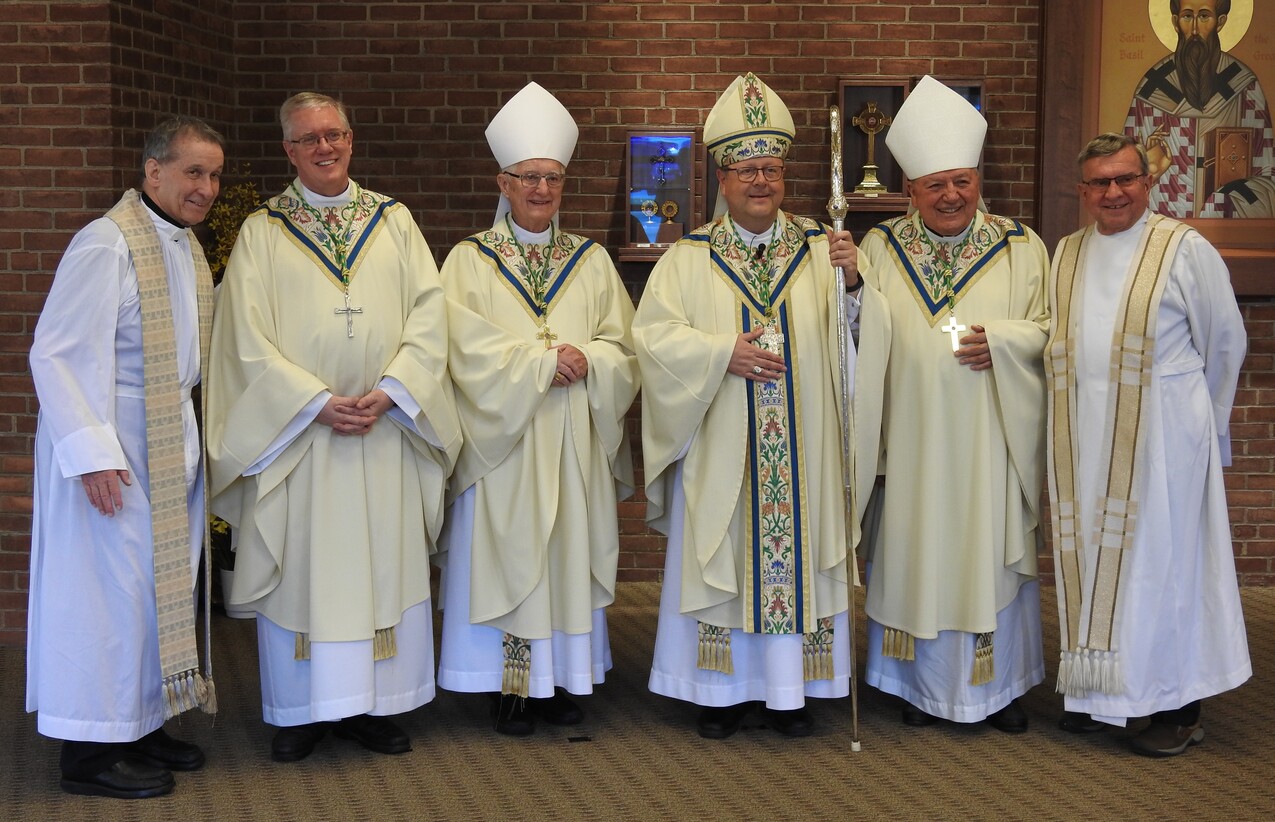 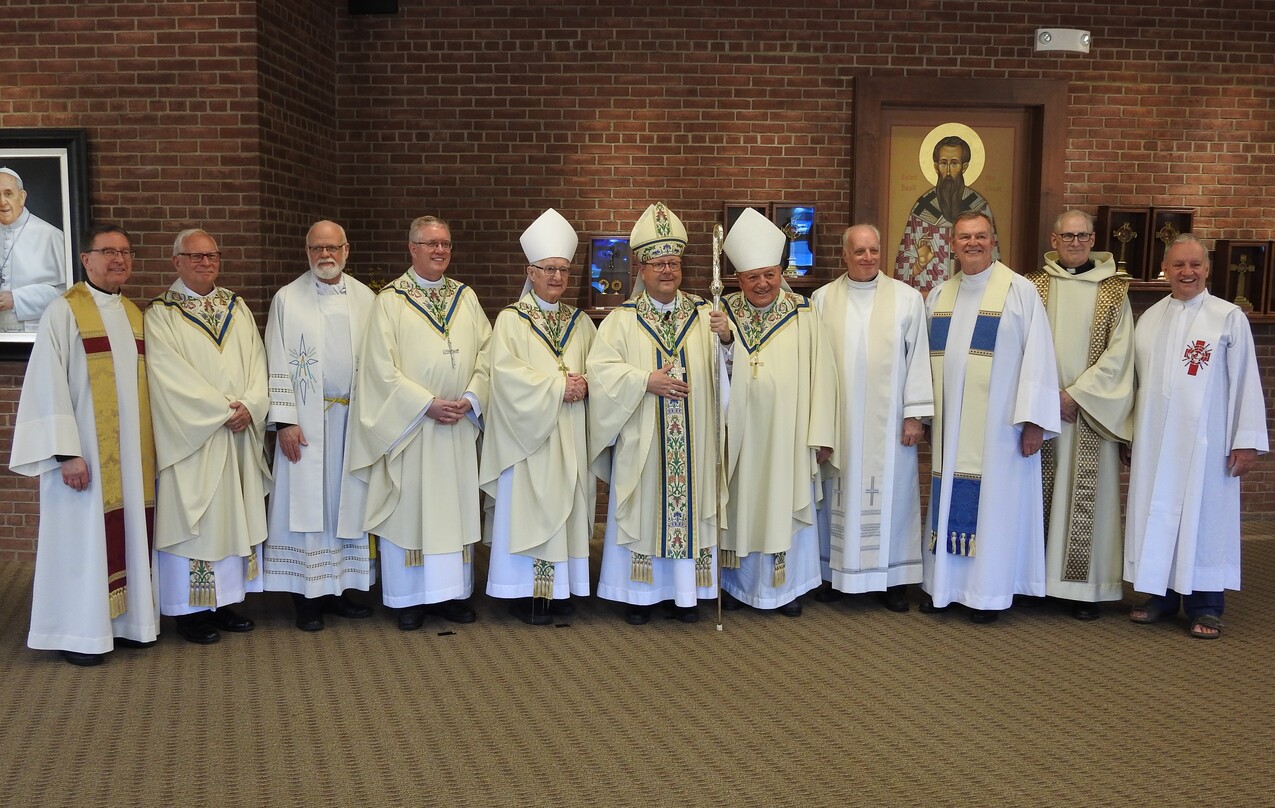 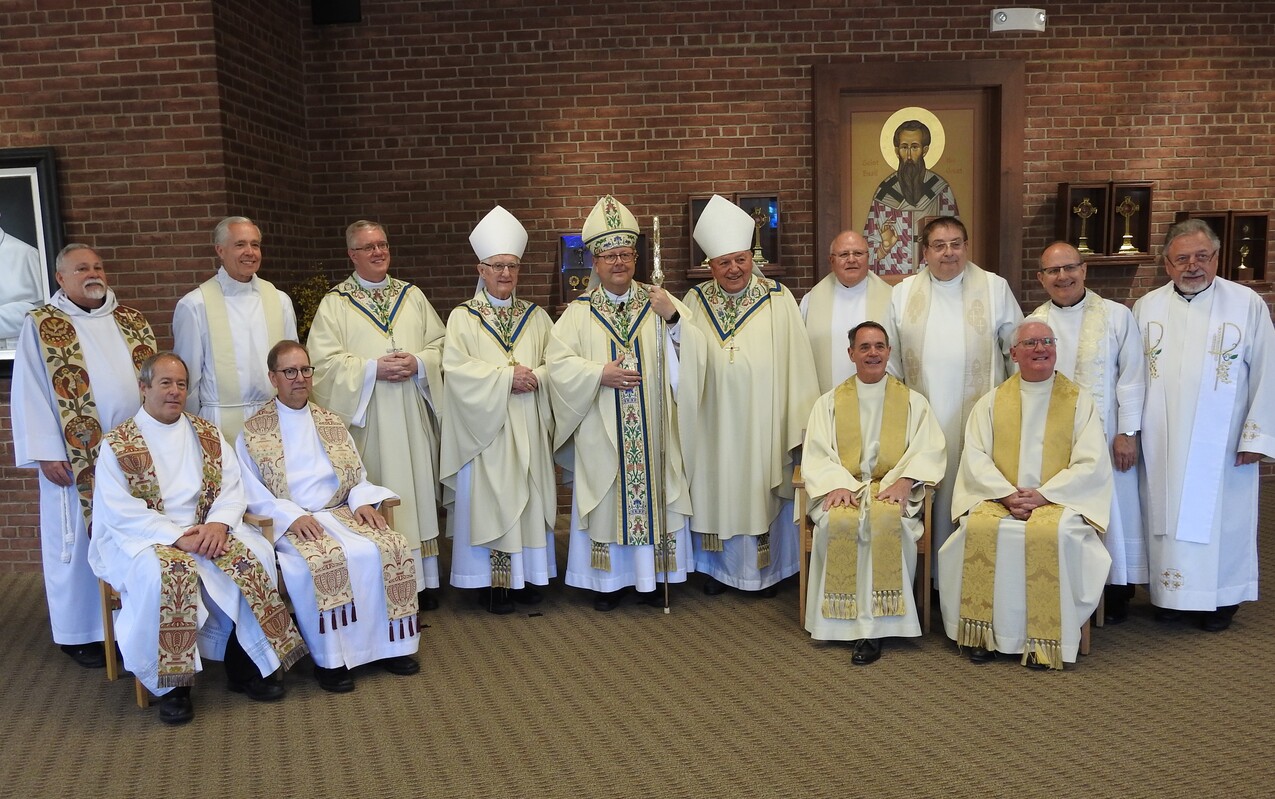 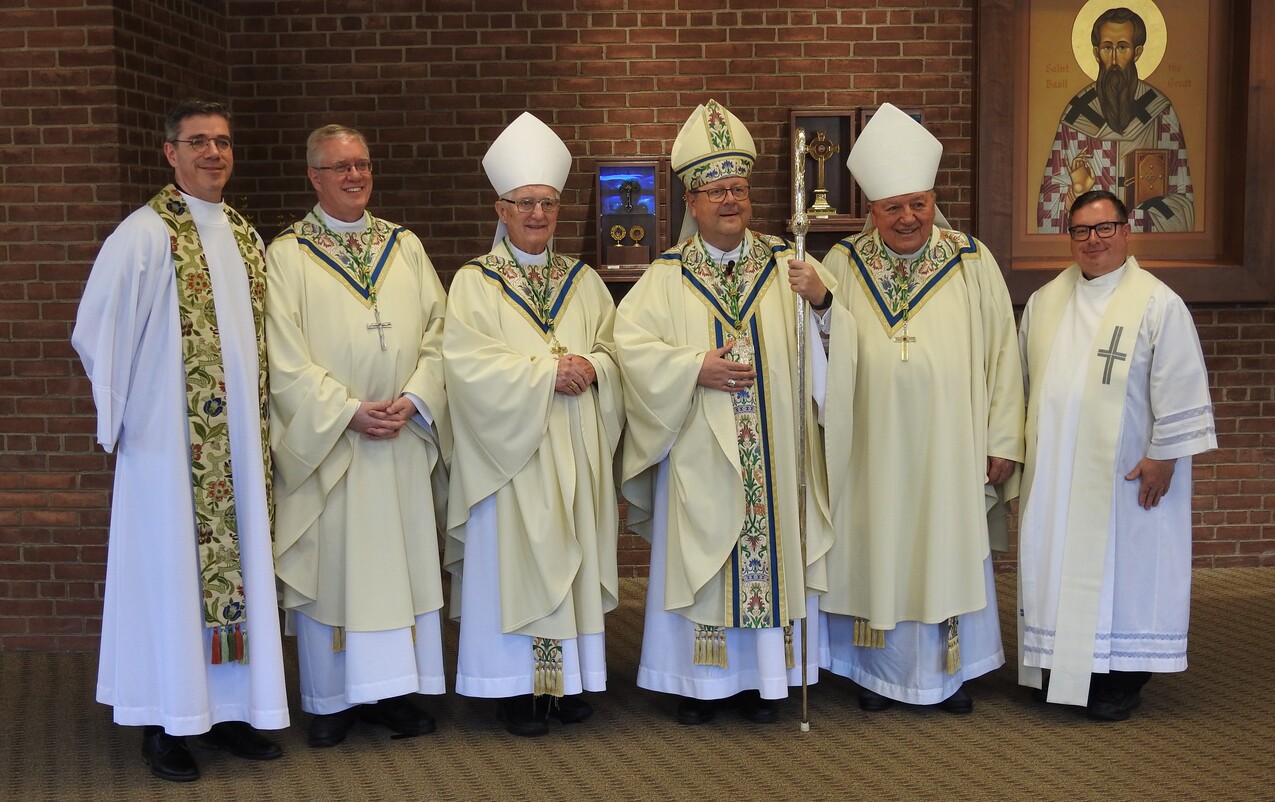 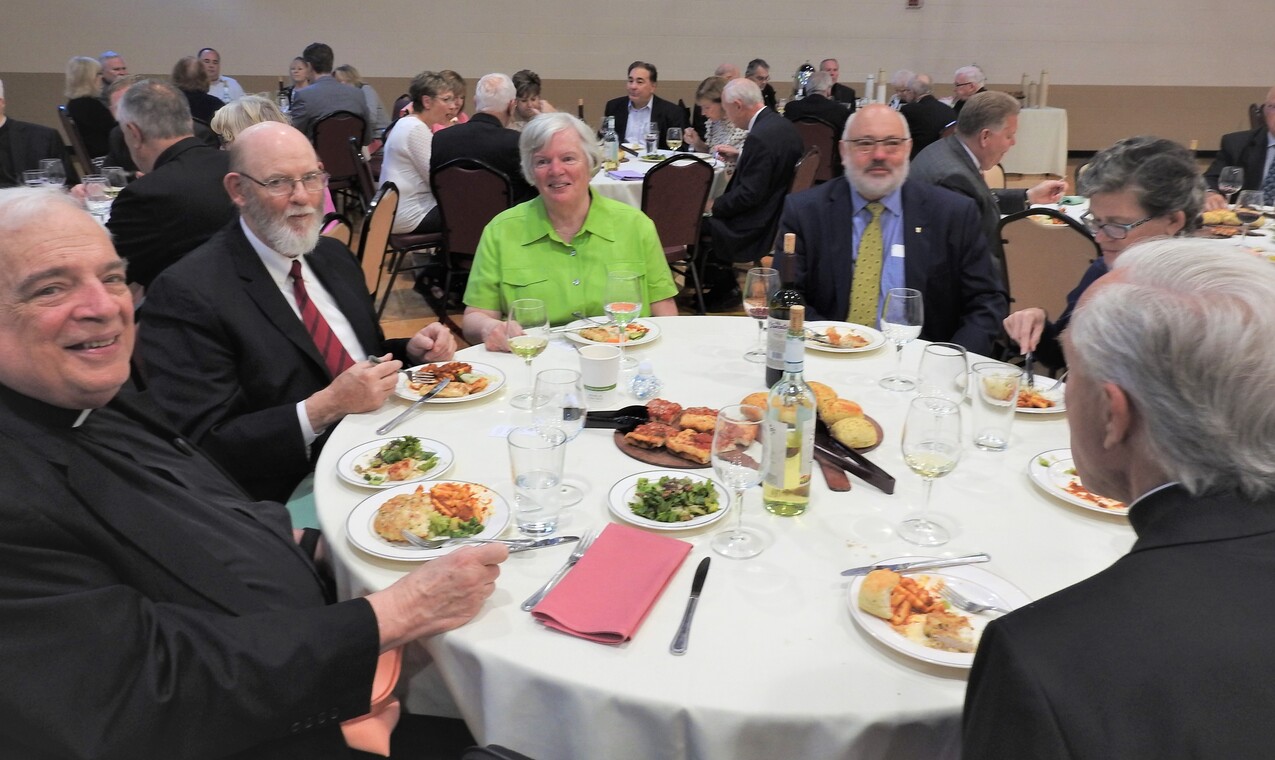 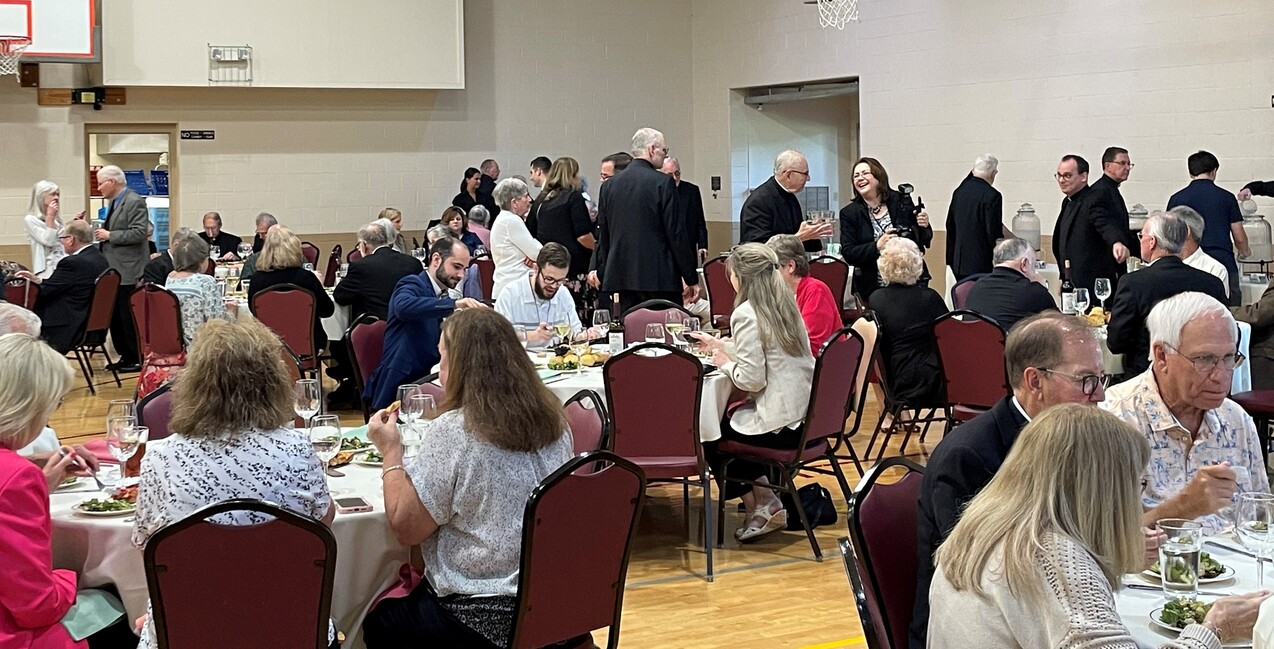 After a two-year hiatus because of the coronavirus pandemic, the in-person celebration of priest jubilees returned on May 24. The event, which marked the 60th, 50th, 40th and 25th anniversaries of the priests’ ordinations, included a Mass celebrated by Bishop Edward Malesic in St. Basil the Great Church in Brecksville and a lunch for the priests and their guests. The honorees celebrated their jubilees in 2020, 2021 and 2022.

Father Gary Yanus, diocesan judicial vicar, was the homilist. He marked his 40th anniversary as a priest in 2021.

Father Yanus began his homily by recalling the time he took his mother on a vacation to the Virgin Islands. As they entered the local church for Sunday Mass, an usher greeted them saying, “Welcome, sinner.” He said his mother looked at him and quipped, “They know you here?” The comment elicited laughter from the congregation.

The greeting was poignant, Father Yanus said, because it’s true. “We’re all sinners.”

As priests, he said they do their best to present the Gospel, but at times that is difficult. The world situation in the past two decades has made priestly ministry – being a herald of the Gospel – even more difficult, he said, referring to the “grave sins of some of our brothers.” But he said the Lord has expectations for them and as priests, they accepted that challenge. “We find a way to reintroduce the teachings of Jesus Christ and stay faithful to the Gospel,” he added.

Father Yanus said many of his brother priests have experienced difficulties in their ministry. He mentioned one priest who was concerned about a measure his city was considering regarding human life. He attended the city council meeting and spoke against the proposal, earning the admiration of some parishioners – but not all. “He expected it. He did what a priest must do – he spoke out.”

In recent years, priestly ministry has become more difficult,” Father Yanus said, noting some of the fallout leaves scars, which should remind them of their ordination promises to Jesus Christ.

He said Thomas, when confronted by the risen body of Jesus – a body filled with scars after the horrors he endured during his scourging and crucifixion – was able to put his hand into the wound on his side. “I find it interesting that the risen body of Christ still retained those wounds,” Father Yanus said, adding, “He bore those scars without shame or apology.”

Jesus was willing to endure the suffering and those scars to save us. He honored humanity, created by God, despite our flaws, he said.

“Our scars of the last 20 years are not pretty, but they tell a story,” Father Yanus said.

He talked about a recent presentation given by Father Damian Ference, vicar for evangelization, to the priests, focusing on the truths and beauty of the Catholic faith. Evangelizing and sharing the good news of our faith is like a balm for the scars of the past, he said.

Father Yanus mentioned the attributes of some of his fellow priests, including compassion, faithfulness and approachability, which make them good shepherds.

“The grace of ordination is appreciated. Sinners though we are, we are blessed in many ways. We are the symbols of Christ’s scarred hands and body in humble service to the Church we love,” he added.

Bishop Malesic told the group he was very glad to be able to celebrate in person with them. He commended Father Yanus for his moving homily, reminding his fellow priests “We need to continually reflect on what it’s like to be a priest.” He urged then to recall their ordination day and how they had no idea what their future ministry would bring.

“We’re all connected to God’s plan to save souls. Whatever the world throws at us, it may hurt, but at the end of the day, when we stand before God, we tried to do something good, to do his will, so we are part of something good,” the bishop said.

“I see your faithfulness and had work,” he said, thanking the priests for their ministry. He also commended the deacons and lay people for their help and support.

The bishop said he is marking the 35th anniversary of his ordination on May 30, which drew applause from the congregation. “The blessings have far outweighed the challenges,” he said. “We are all part of Christ crucified and by our wounds, we go back to him again and again.”

After Mass, the anniversary classes posed for photos with the bishops before heading to the parish hall for lunch.

The Mass was livestreamed by St. Basil Parish and can be viewed here.