Cutting garden keeps St. Sebastian Church blooming inside and out 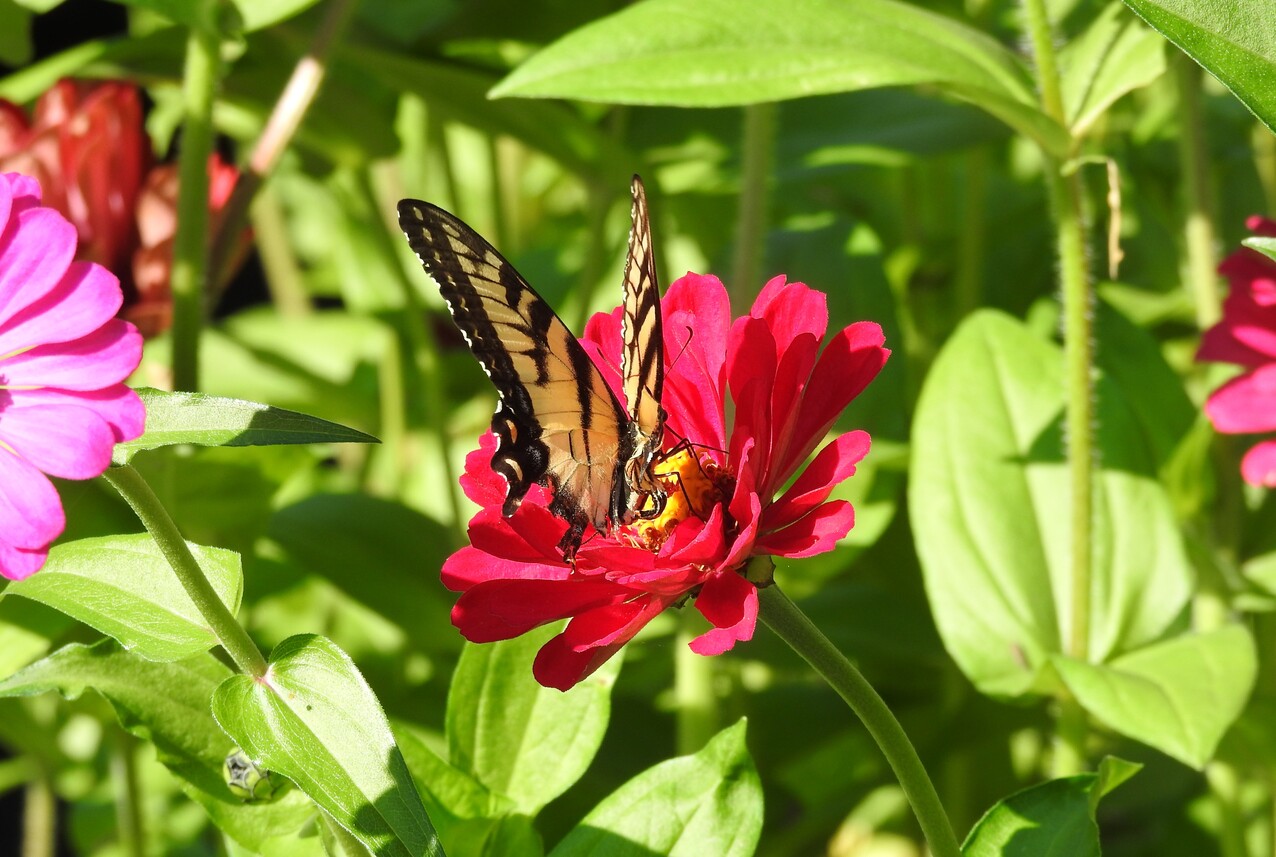 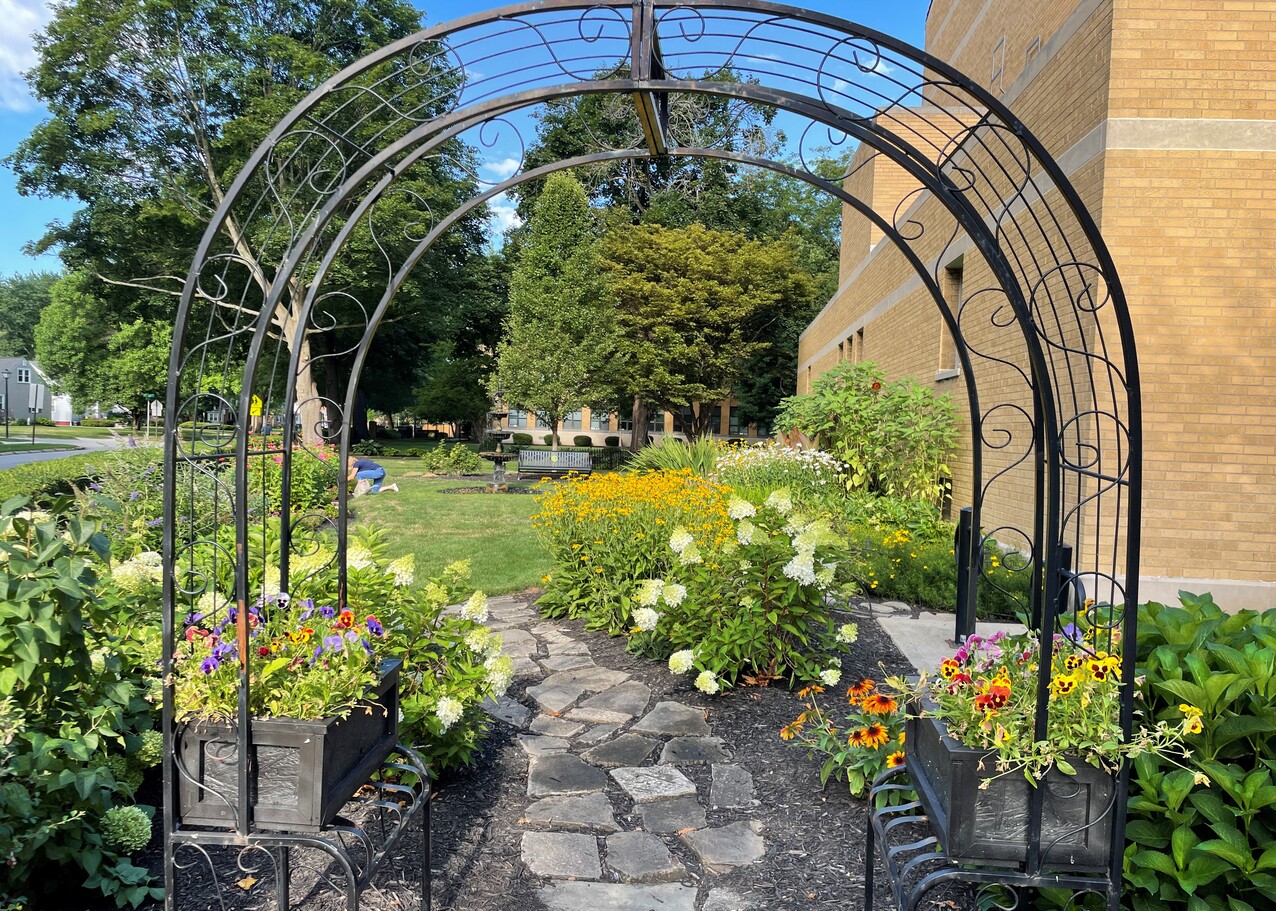 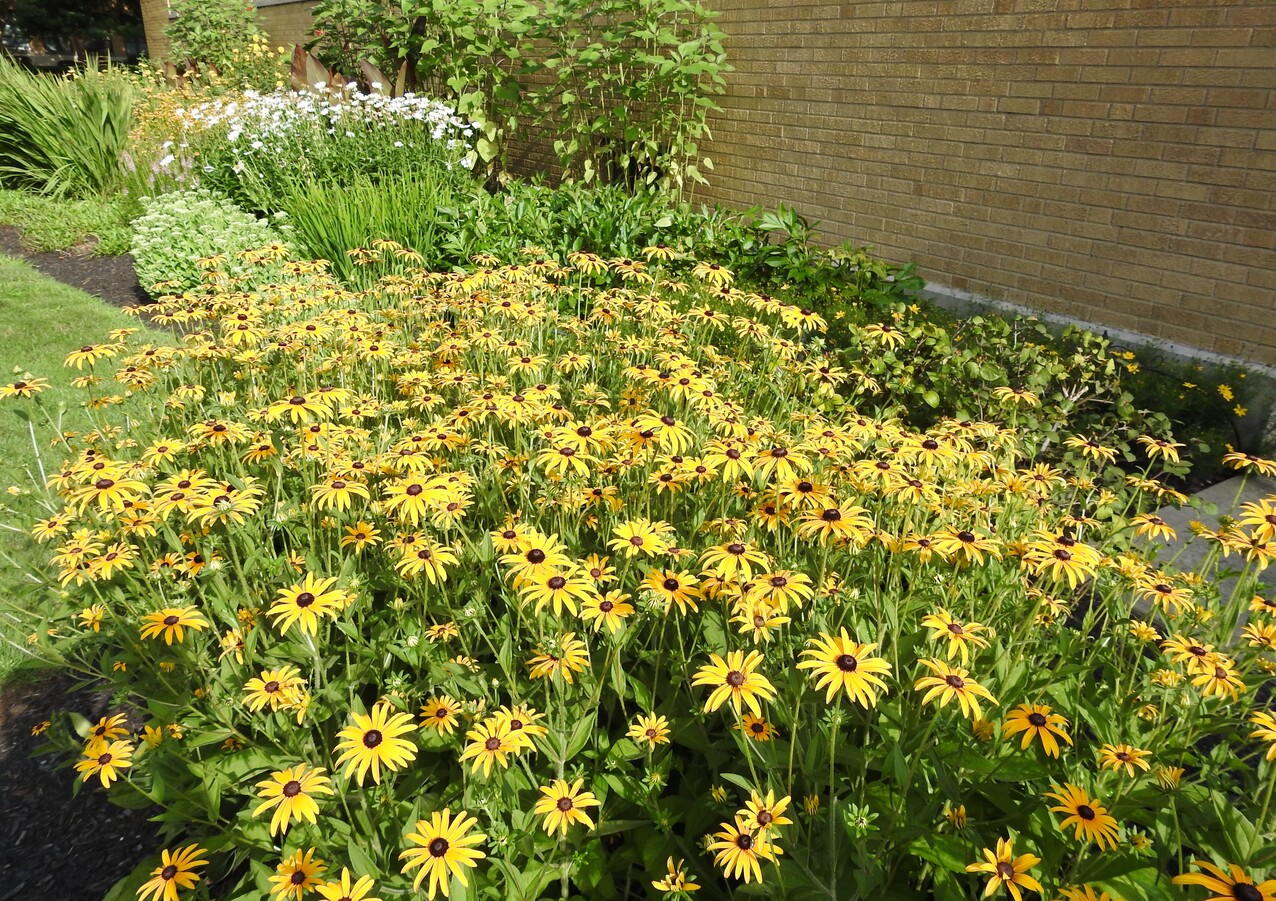 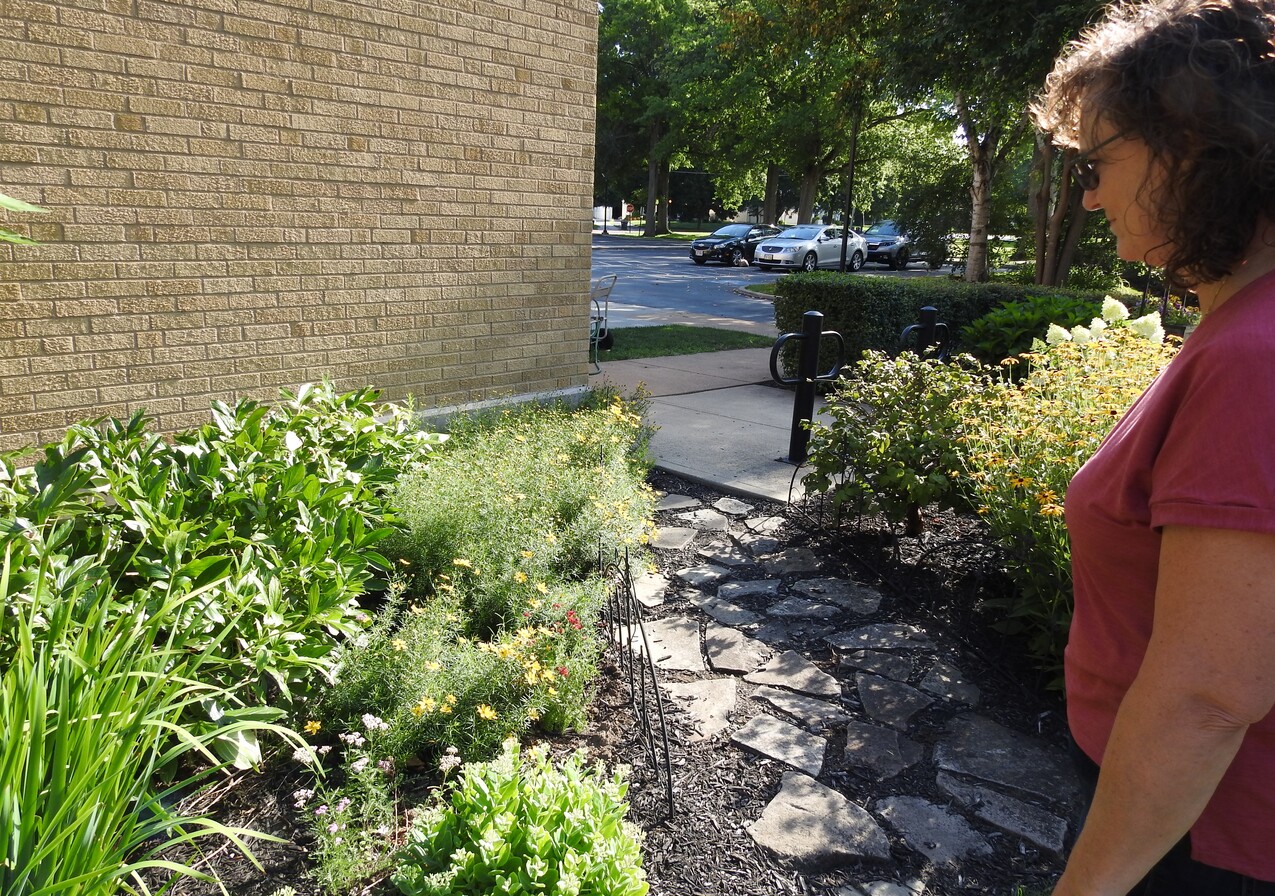 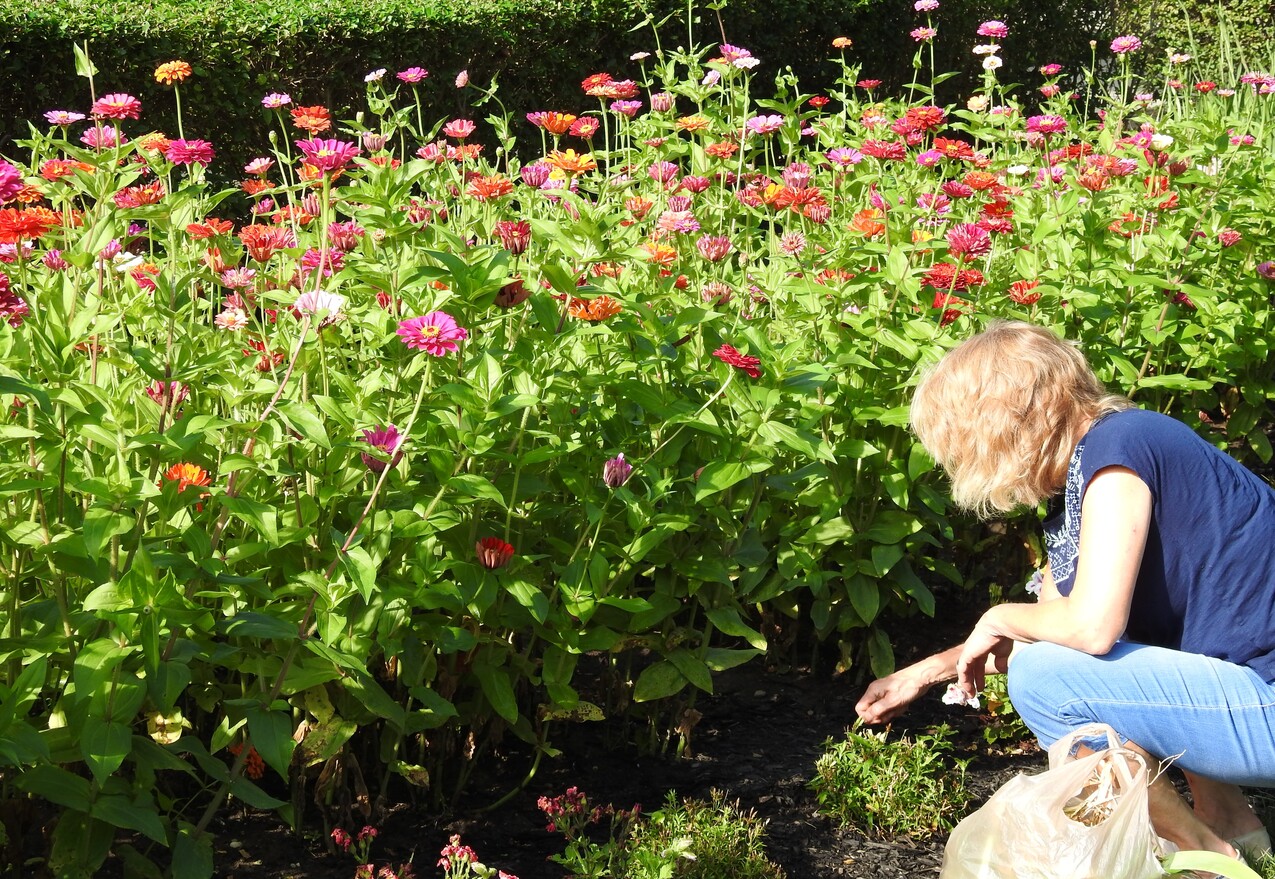 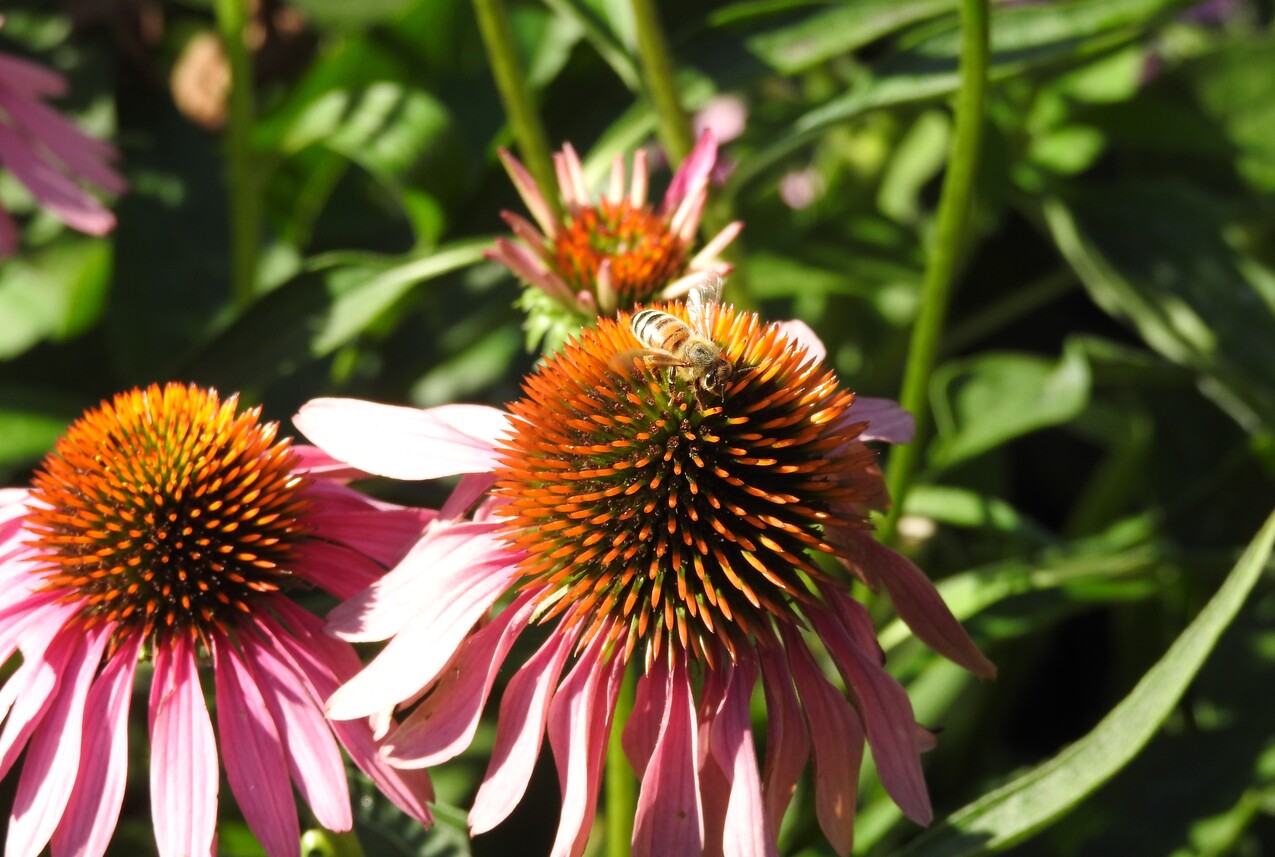 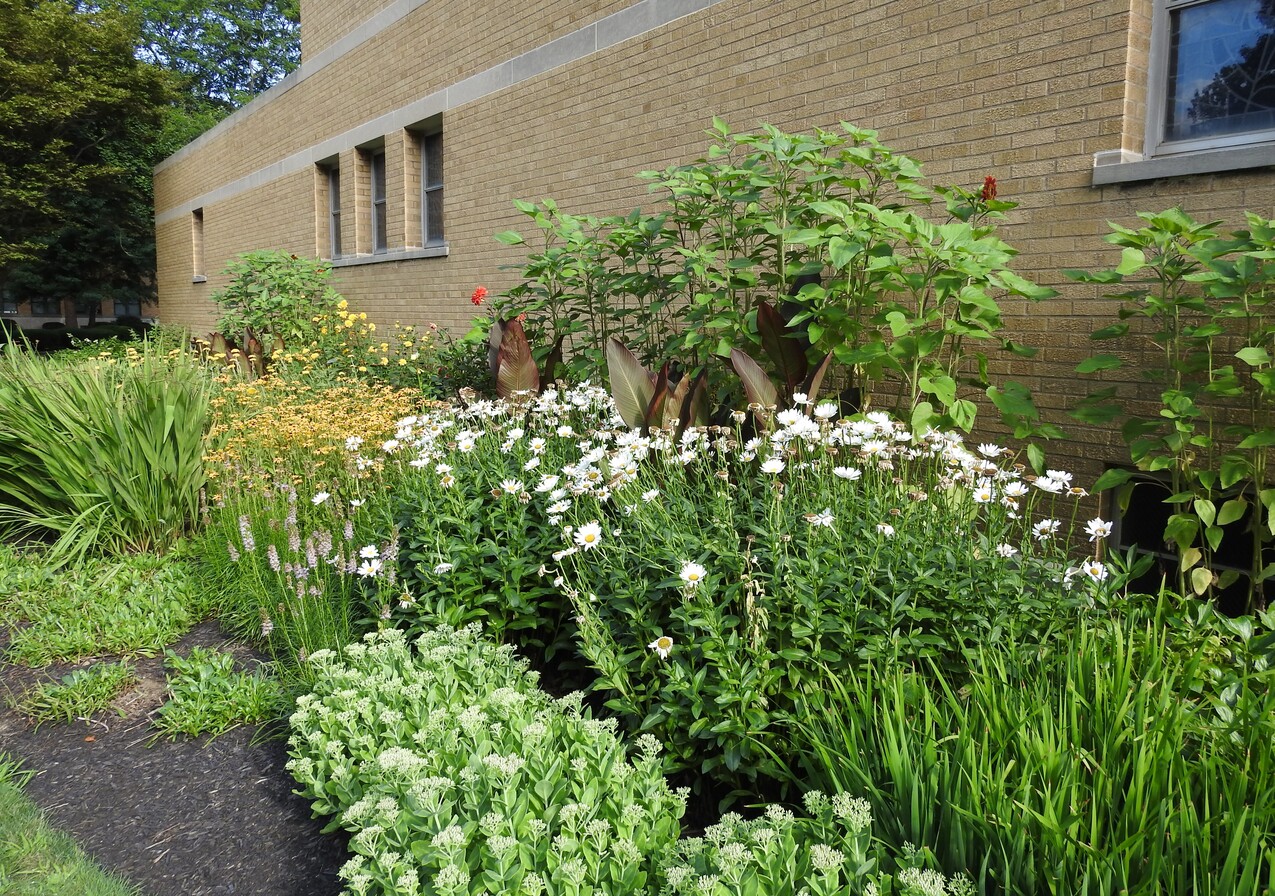 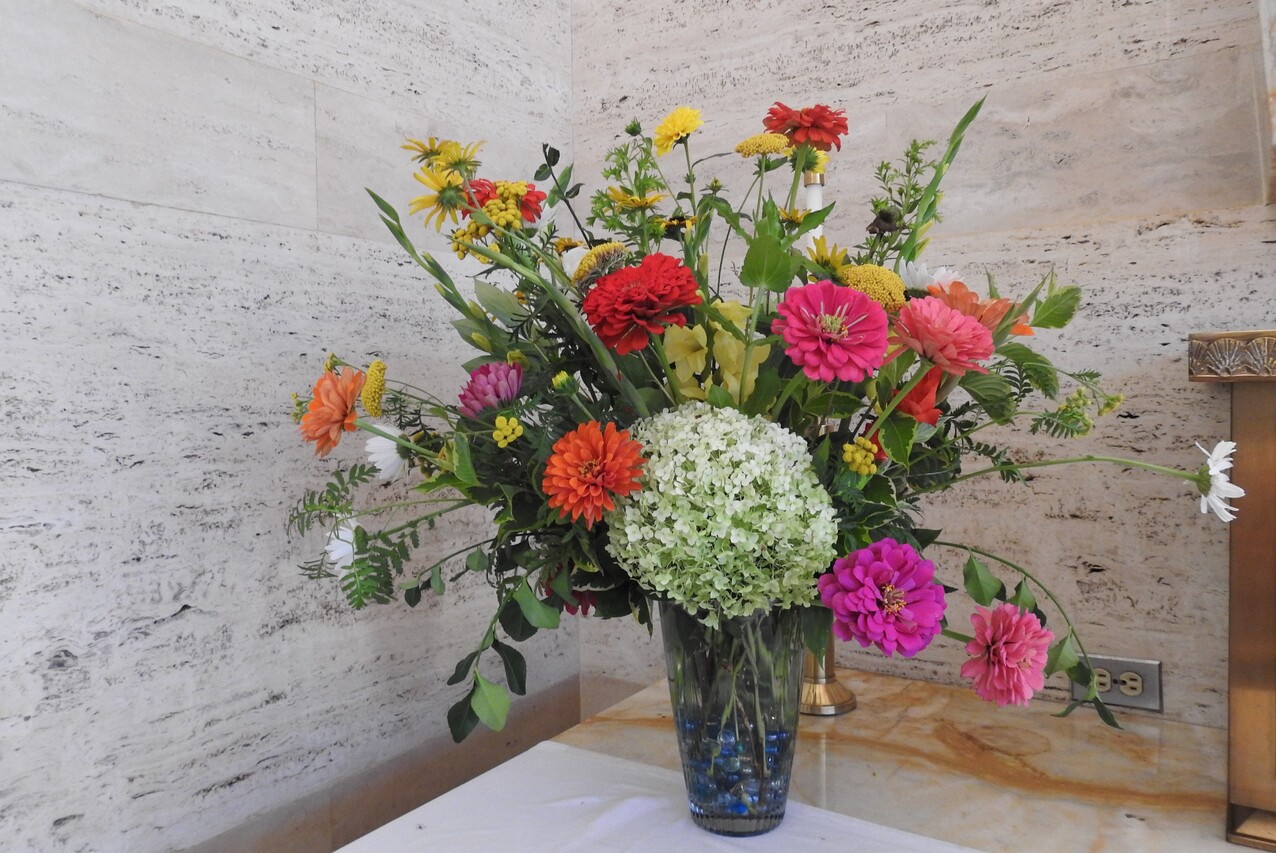 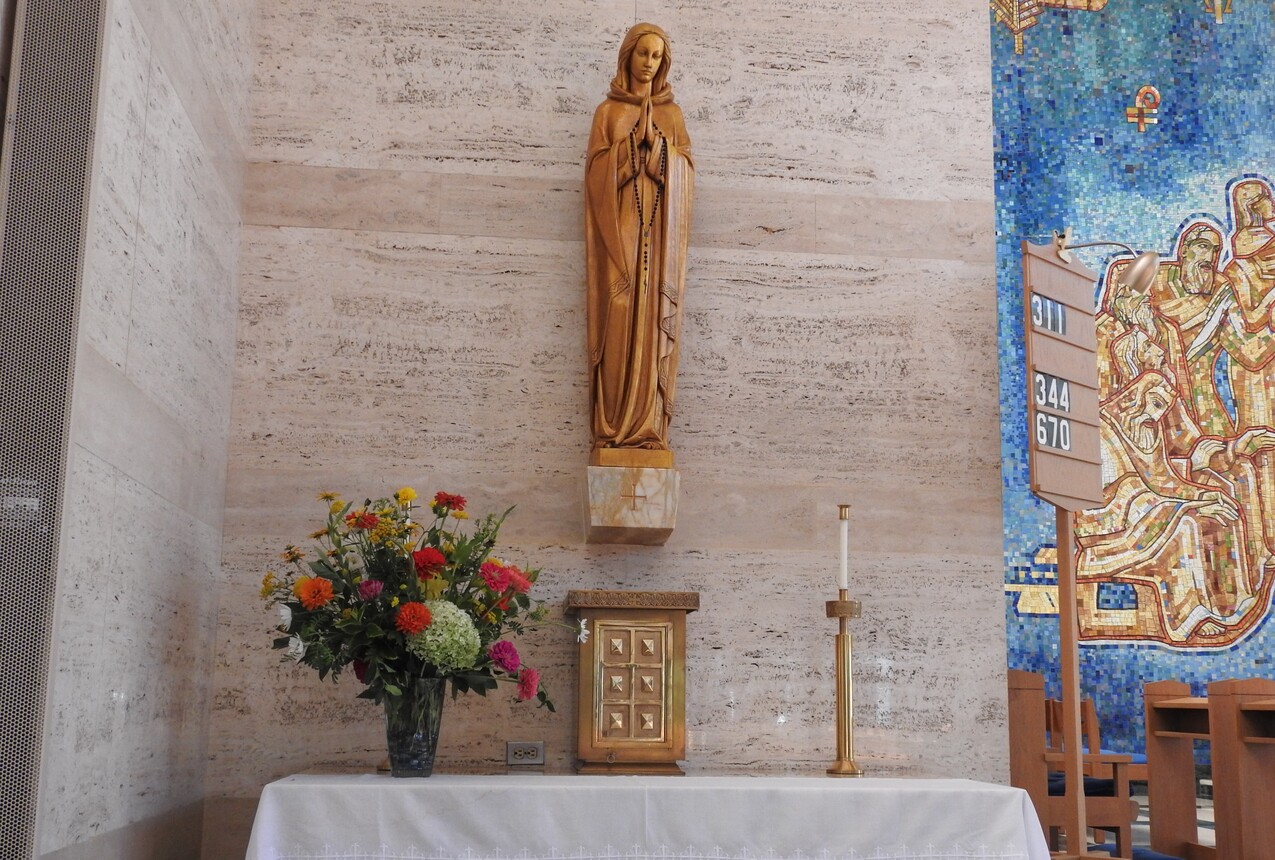 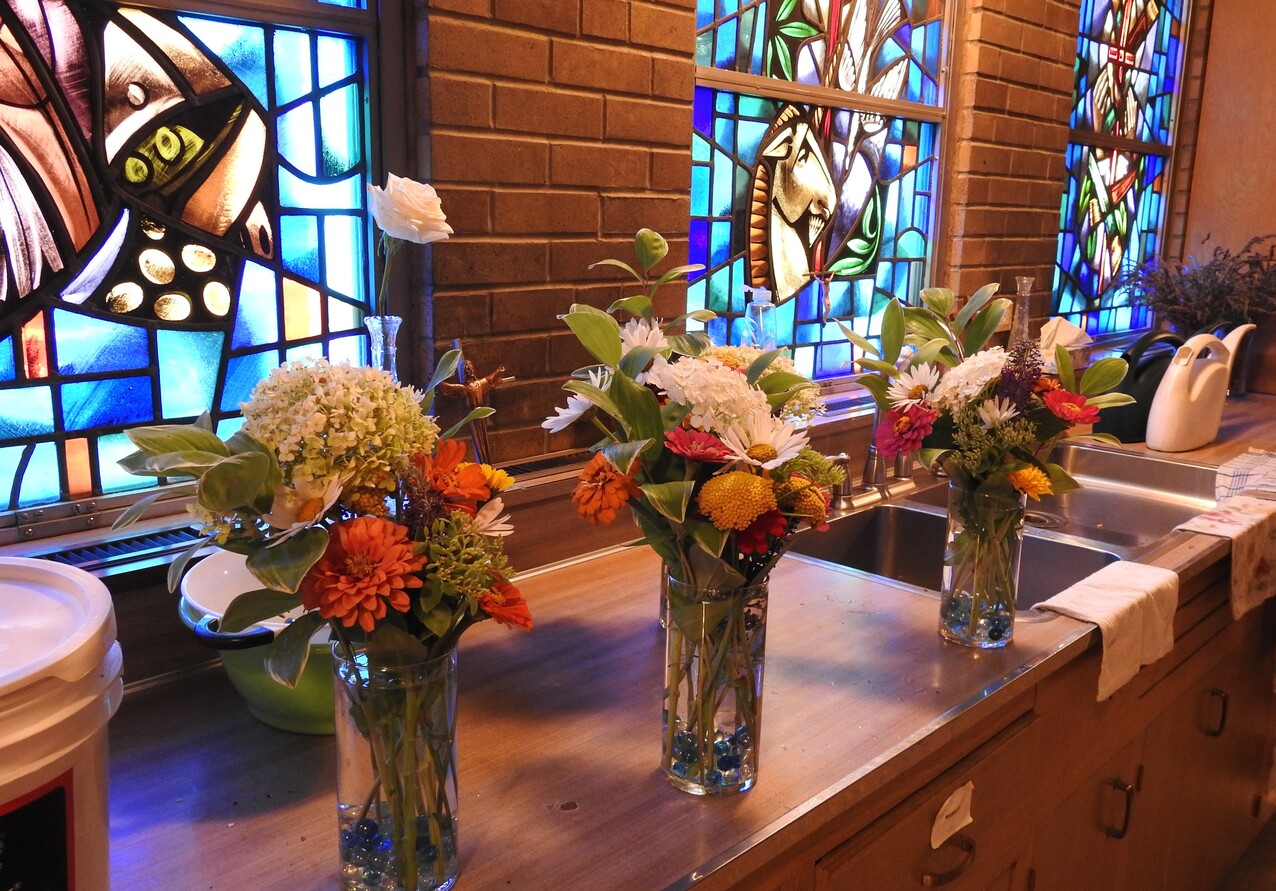 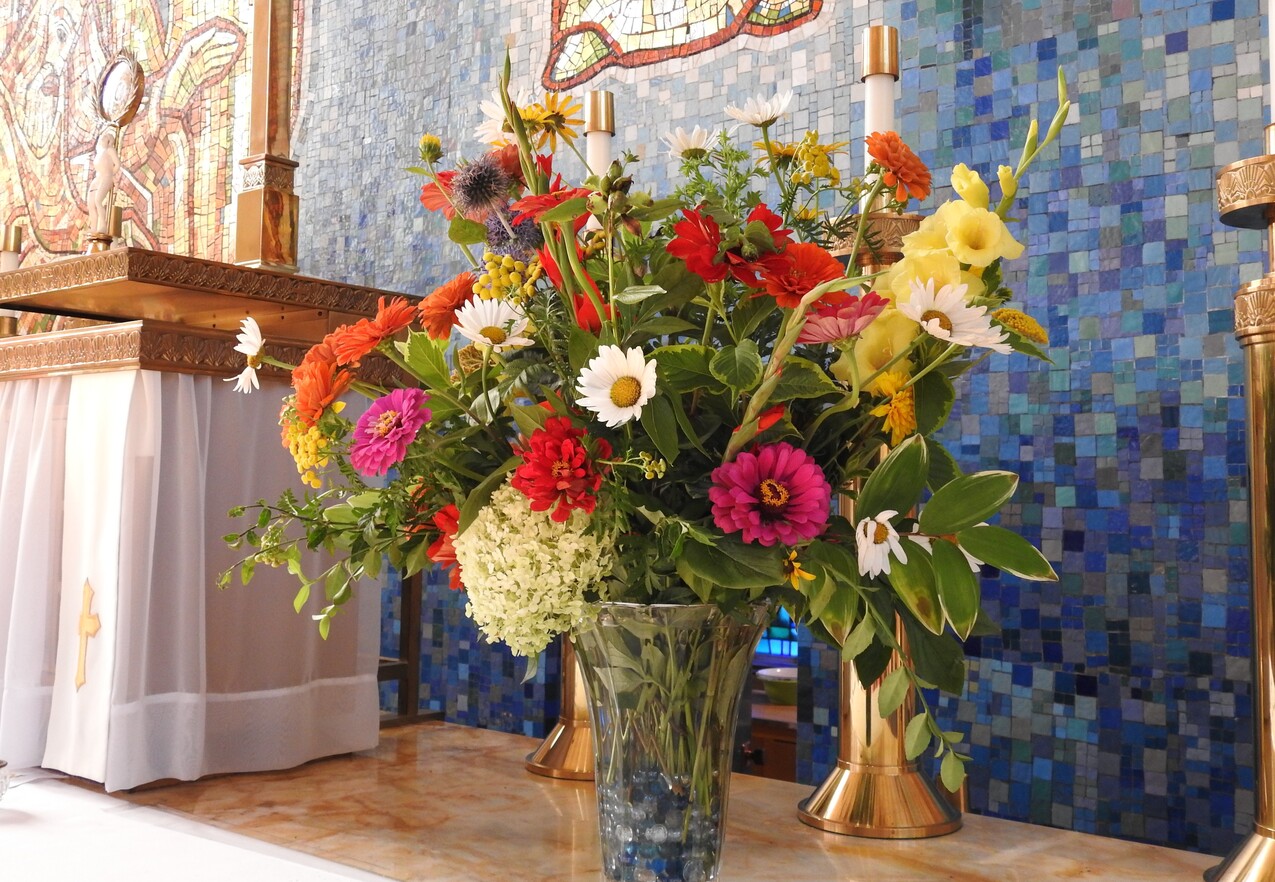 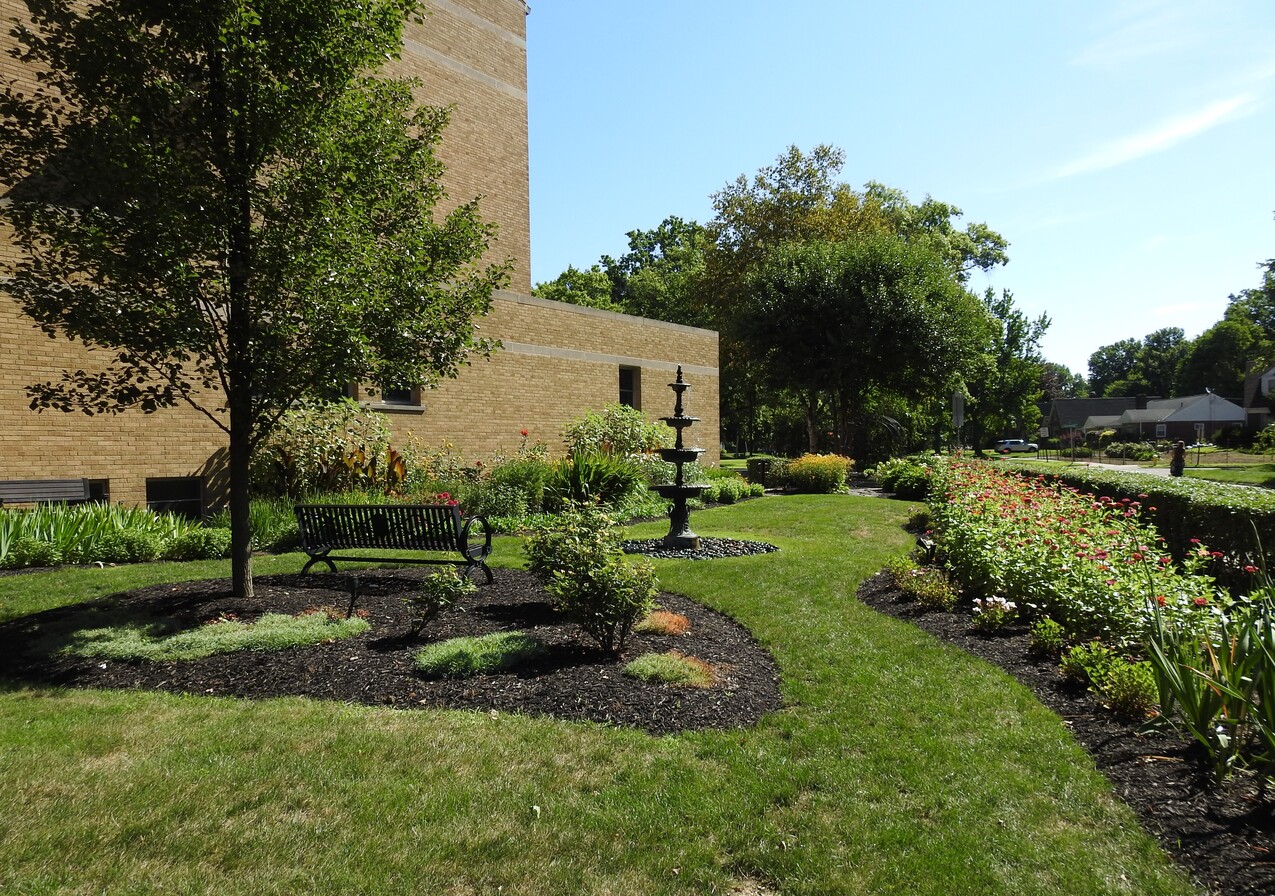 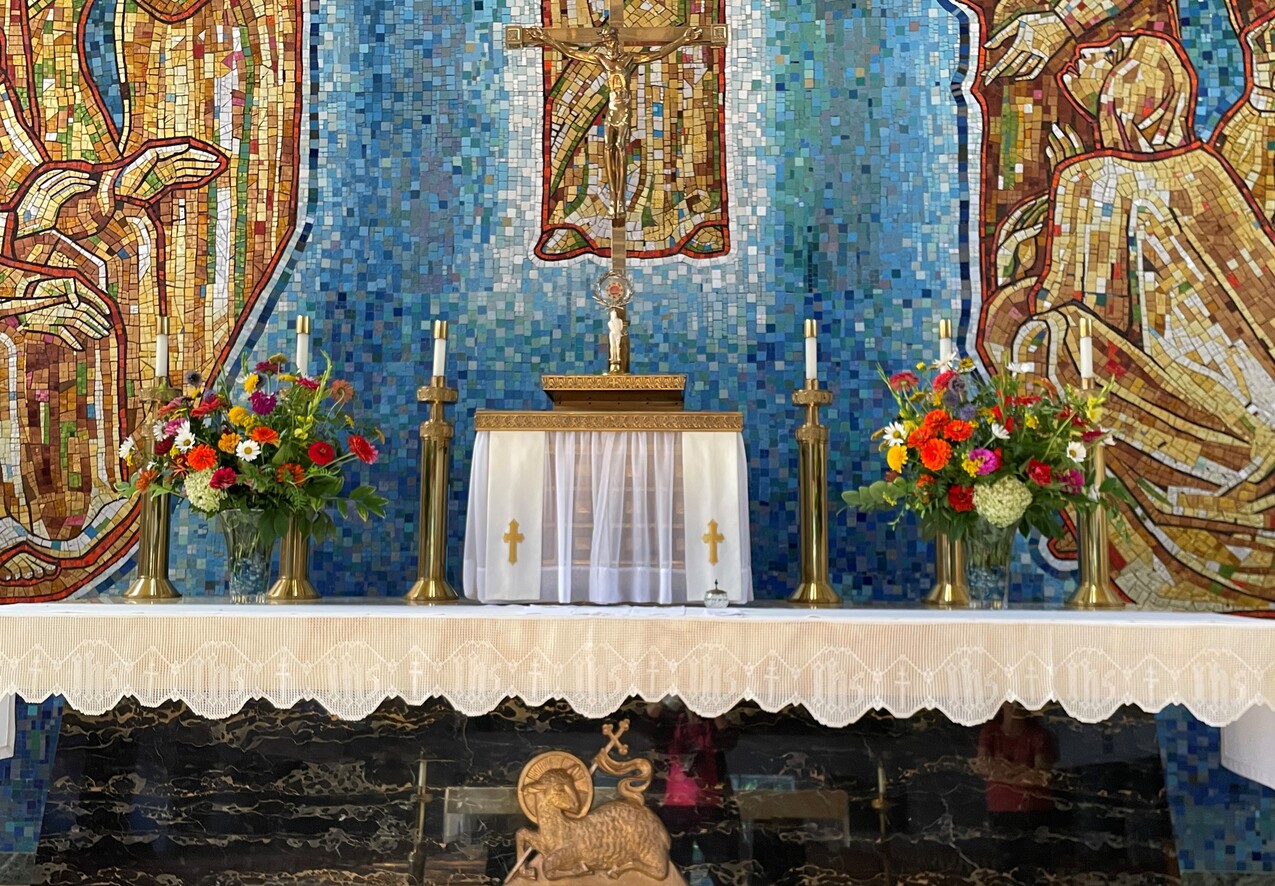 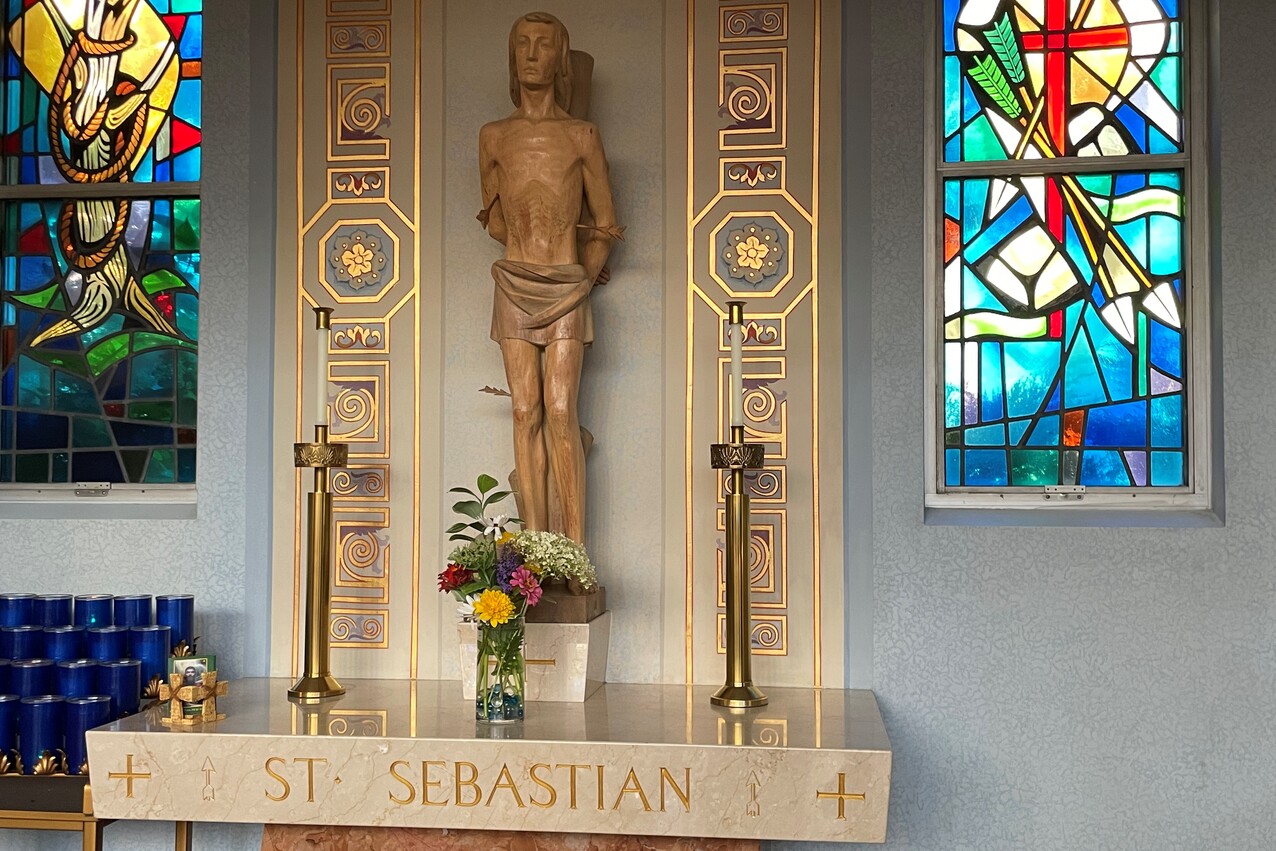 In 2008, Karen Spangler brought some brightly colored zinnias to her church hoping to add a splash of color to the altar area.

“Unfortunately, they looked lost,” said Spangler, who also serves as the sacristan. She explained that St. Sebastian Church in Akron is large and the altar is located quite a distance from the congregation. That means larger flowers were needed to ensure the arrangements were scaled properly to the church’s size.

But an idea was hatched. After some research, trial, error and fine-tuning, a cutting garden was developed on the parish campus. The volunteer-driven project provides flowers for the church throughout the growing season. Spangler said they identified flowers that are best for cutting and will last when used in arrangements.

Because of their height, sunflowers grow near the back of the garden. Spangler said the seeds were donated. The large, yellow flowers will bloom soon and will be paired in floral arrangements with some smaller blooms and greenery from the garden.

Tall, thin German irises, daisies, canna lilies, dahlias, yarrow and mums – a popular fall flower – are among the plants being cultivated by the volunteer garden crew.

“This one is nicknamed Lucifer,” she said, noting the irony of the name for a flower used in an arrangement for a church altar. Its blooms are bright orange and add color to the arrangement.

Spangler said people often share clippings of their perennials. “Gardeners love to share,” she said. It’s also a way for them to manage their gardens, since plants need to be thinned periodically. An avid home gardener, Spangler said she’s replanted some of her flowers in the church cutting garden.

In addition to the size, type and greenery of the plants, Spangler said color is considered. “We have some bright, red flowers that work well for arrangements around Pentecost,” she said.

Since the garden was established – with help from the parish grounds crew – in 2009, Spangler said it has provided most of the flowers for the altar during the growing season. “We still purchase the poinsettias for Christmas and the lilies and other plants for Easter,” she said.

Spangler pointed out some Martha Washington geraniums left from last year’s Easter plants that were transplanted into the garden. “They’re very pretty, but not very big.”

“It’s a low-cost alternative to bring flowers into the church. We have a small budget for mulch,” Spangler said. Volunteers provide the manpower to weed and water the garden. “We have about 10 people who work outside,” she said, noting each volunteer chooses a day to work in the garden. Another group of volunteers selects and arranges the flowers in vases for the main altar, two side altars and other altars along the side of the church.

“They generally cut and arrange the flowers on Thursday or Friday so they are in place for the weekend Masses and adoration,” Spangler said. Volunteers freshen up the arrangements on Monday so they last until replacements are prepared.

One recent Friday morning, volunteer Peggy Wellemeyer – who works outside and as an arranger -- busily weeded the garden as butterflies landed gently on blooms nearby and bees buzzed around stopping on other blossoms. Spangler said in addition to beautifying the church grounds and the altars, the garden is good for the environment since it attracts bees.

She credits Father John Valencheck, parish pastor for his support of the project. “He even found a fountain,” she said, pointing to a multi-level bird bath/fountain that attracts many birds.

There is an arched entranceway to the garden from the church parking lot. The carefully landscaped area also features a bench, making it a perfect place for meditation or personal prayer.

The garden is a collaborative venture, she said, since the parish grounds crew offers assistance with larger tasks, including setting up the space. The grounds crew is charged with maintenance of the parish’s large, parklike campus – located across from Akron’s Elm Hill Park -- that covers about a city block. It includes the church, rectory, parish offices and school, parking and garden areas and a ball field.

Spangler said some of Father Valencheck’s friends have admired the garden and are considering establishing cutting gardens at their parishes.

“We couldn’t have done this without the support of Father John, our wonderful, hard-working volunteers and help from the grounds crew,” Spangler said. “It’s part of the beauty of God’s creation."