‘A Pint with Bishop Malesic’ program renews Theology on Tap 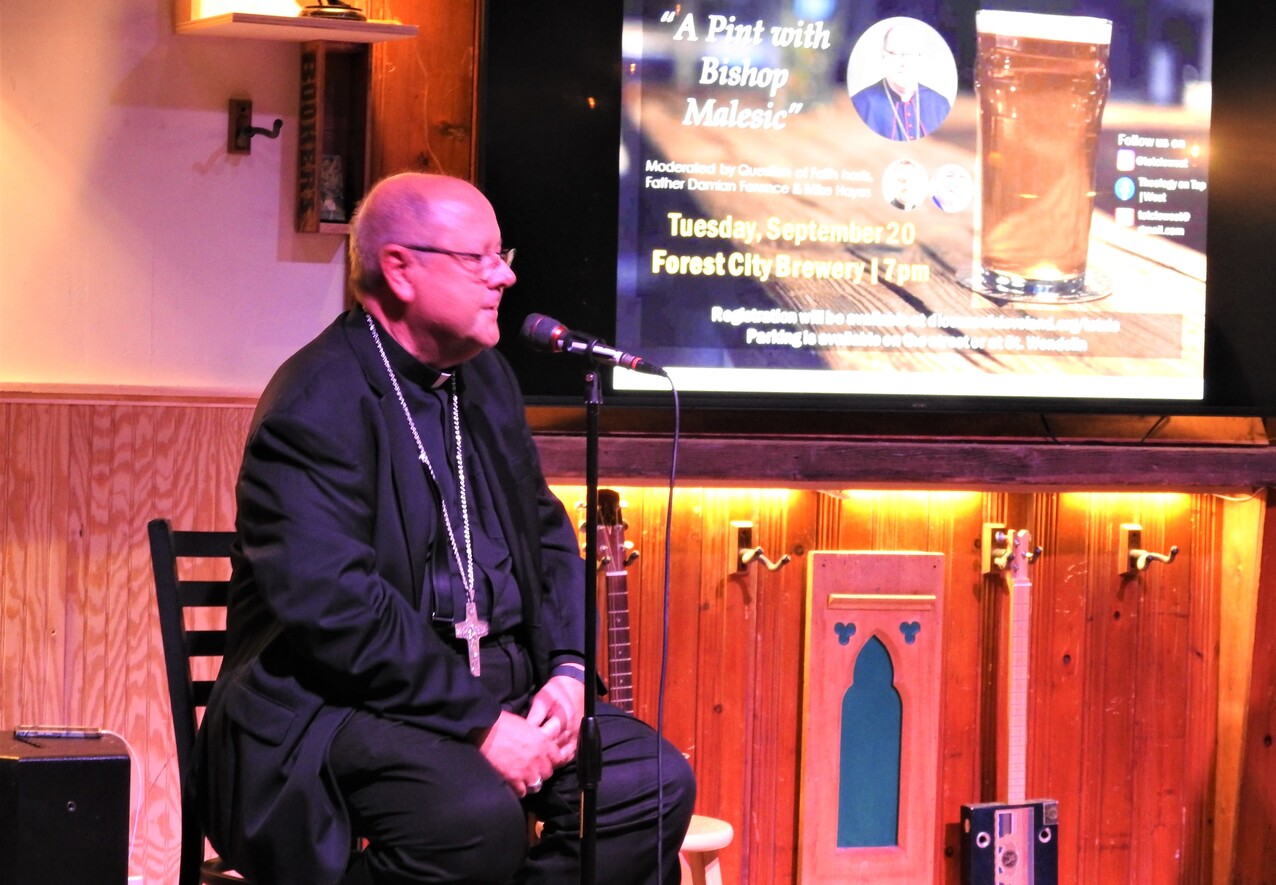 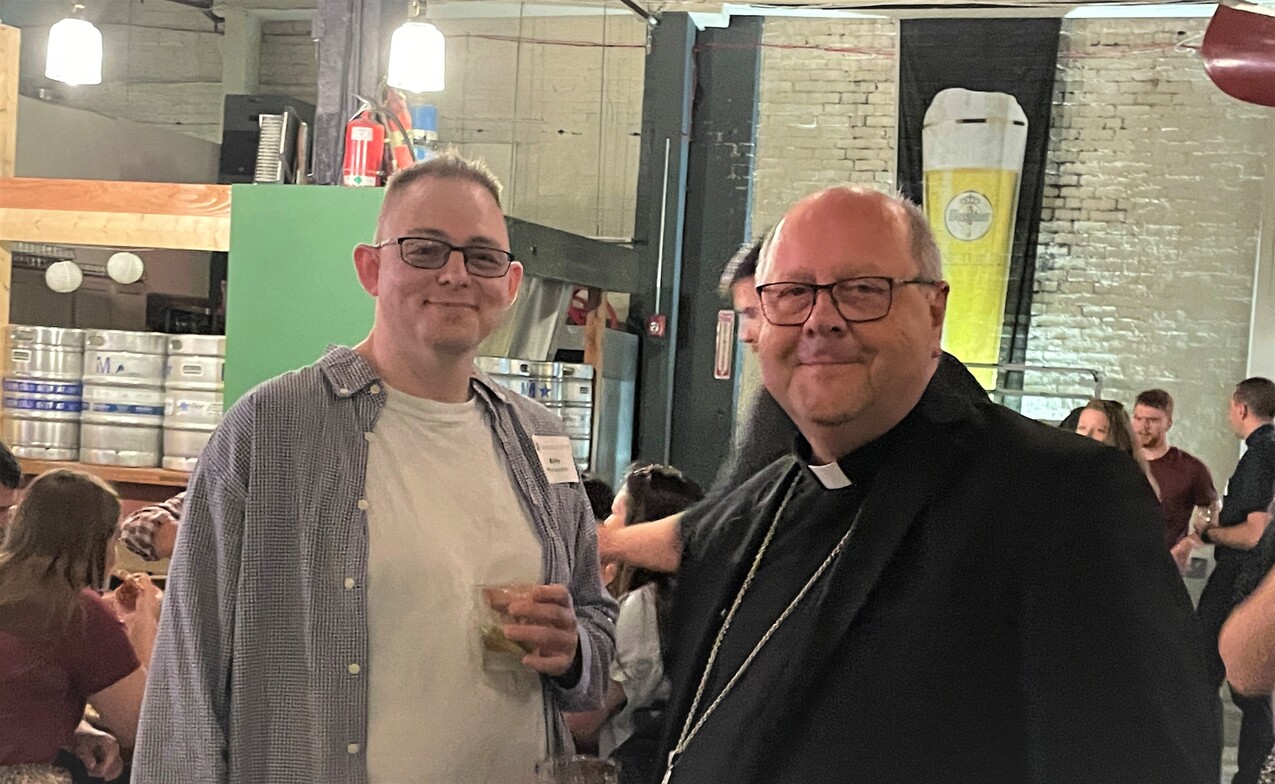 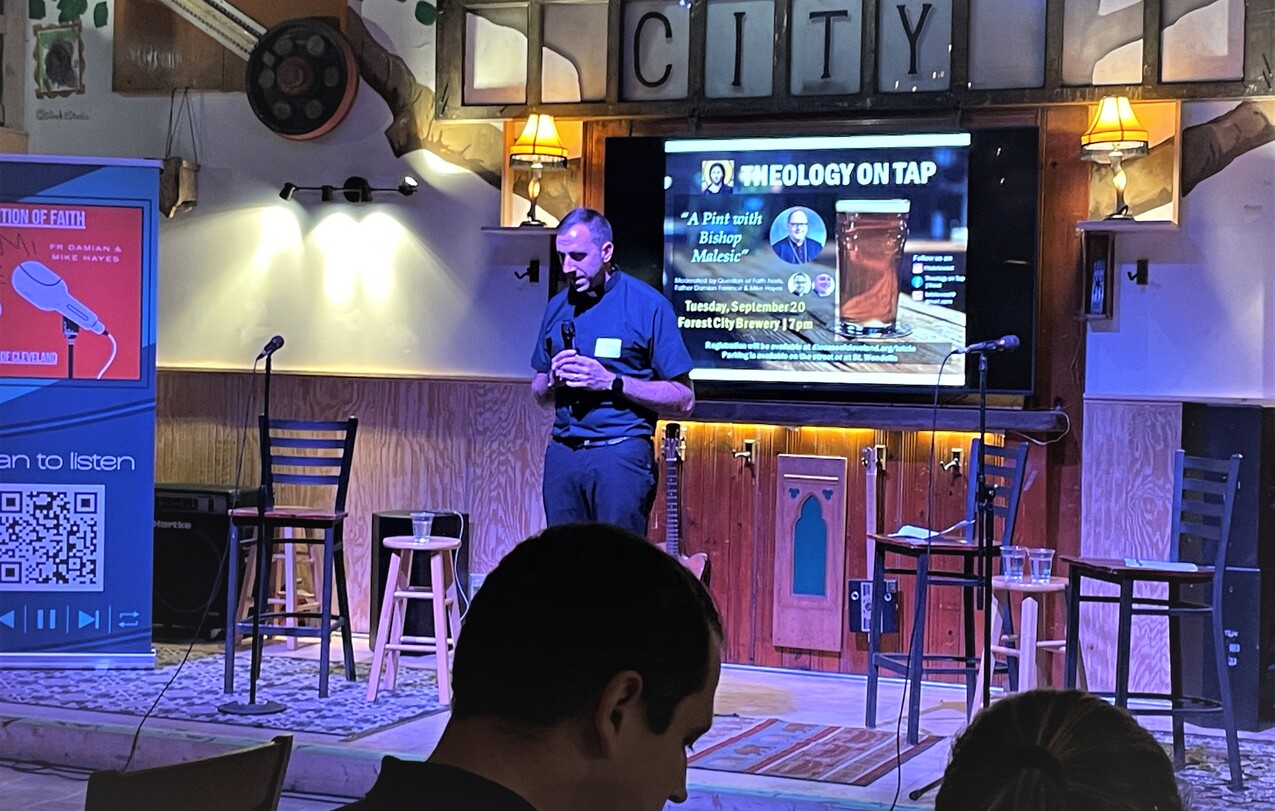 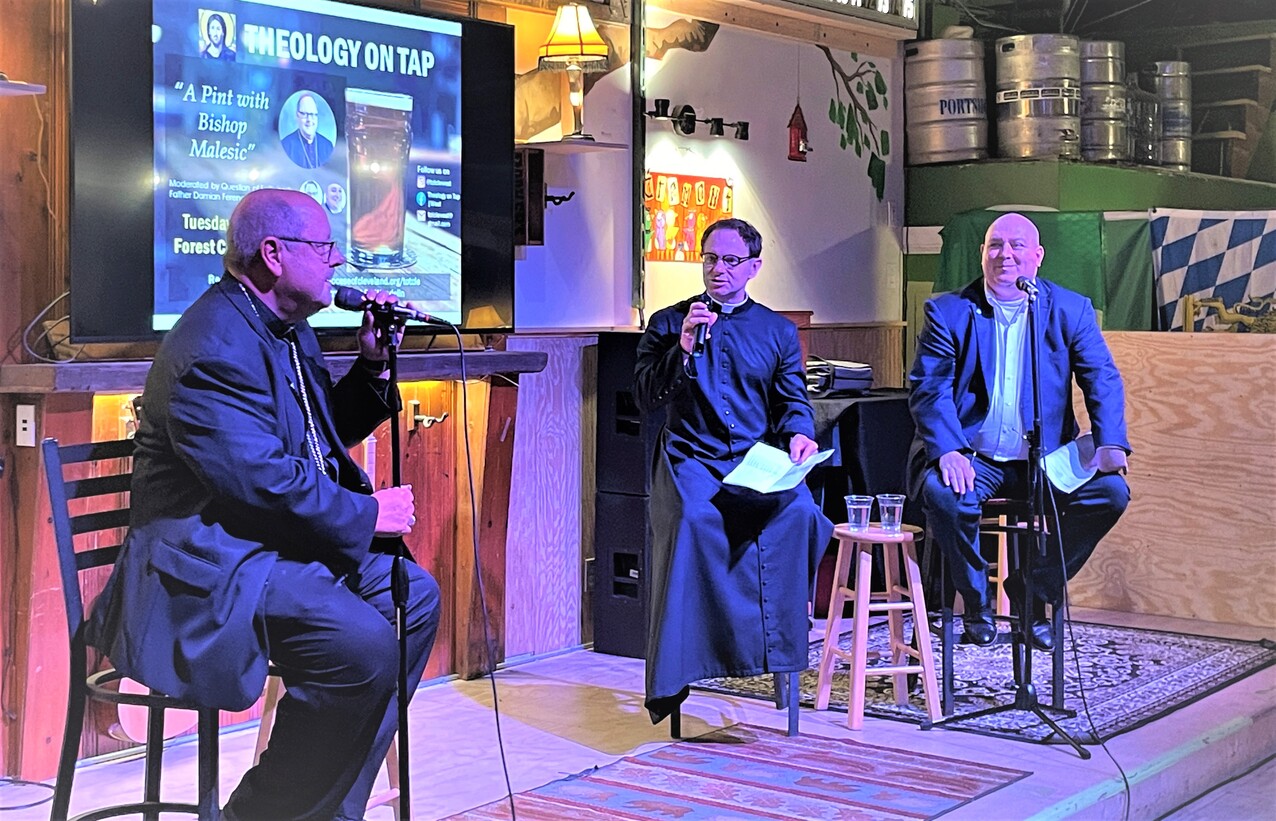 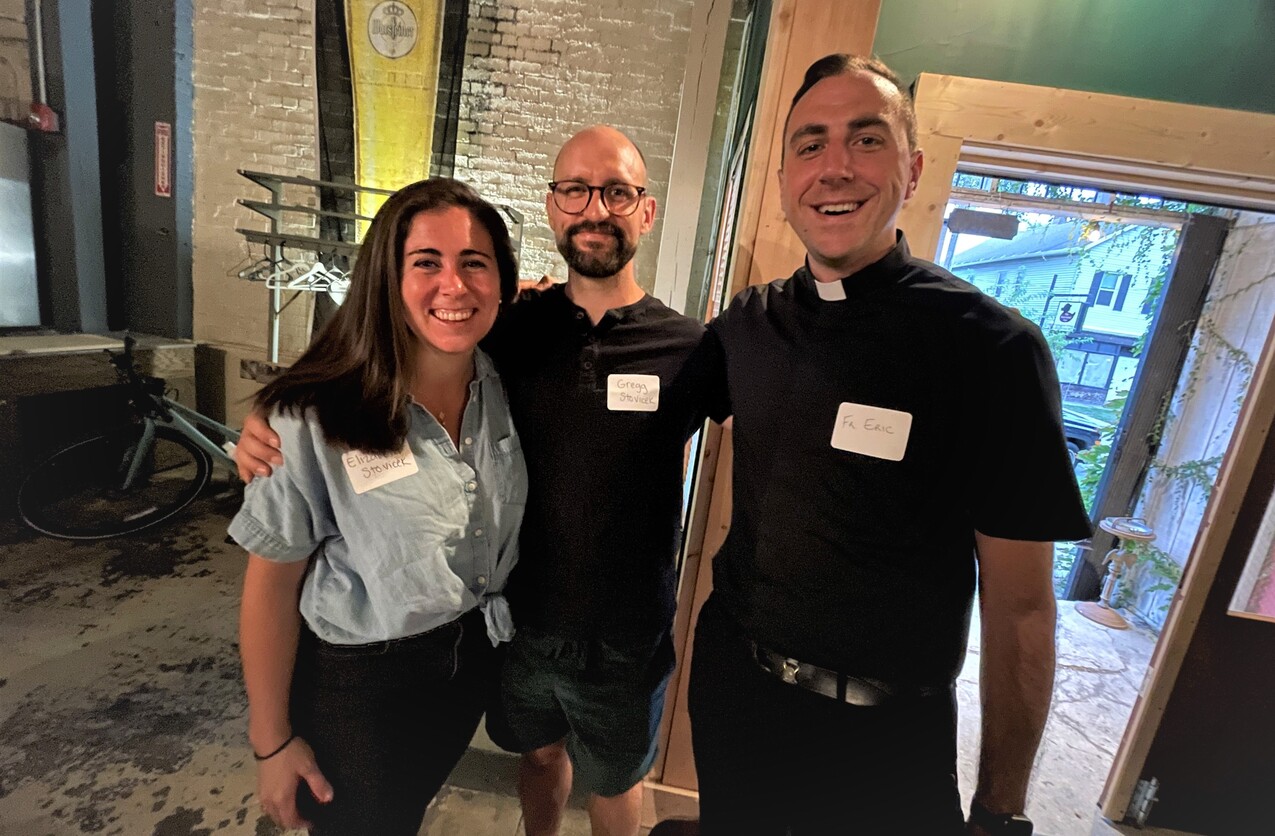 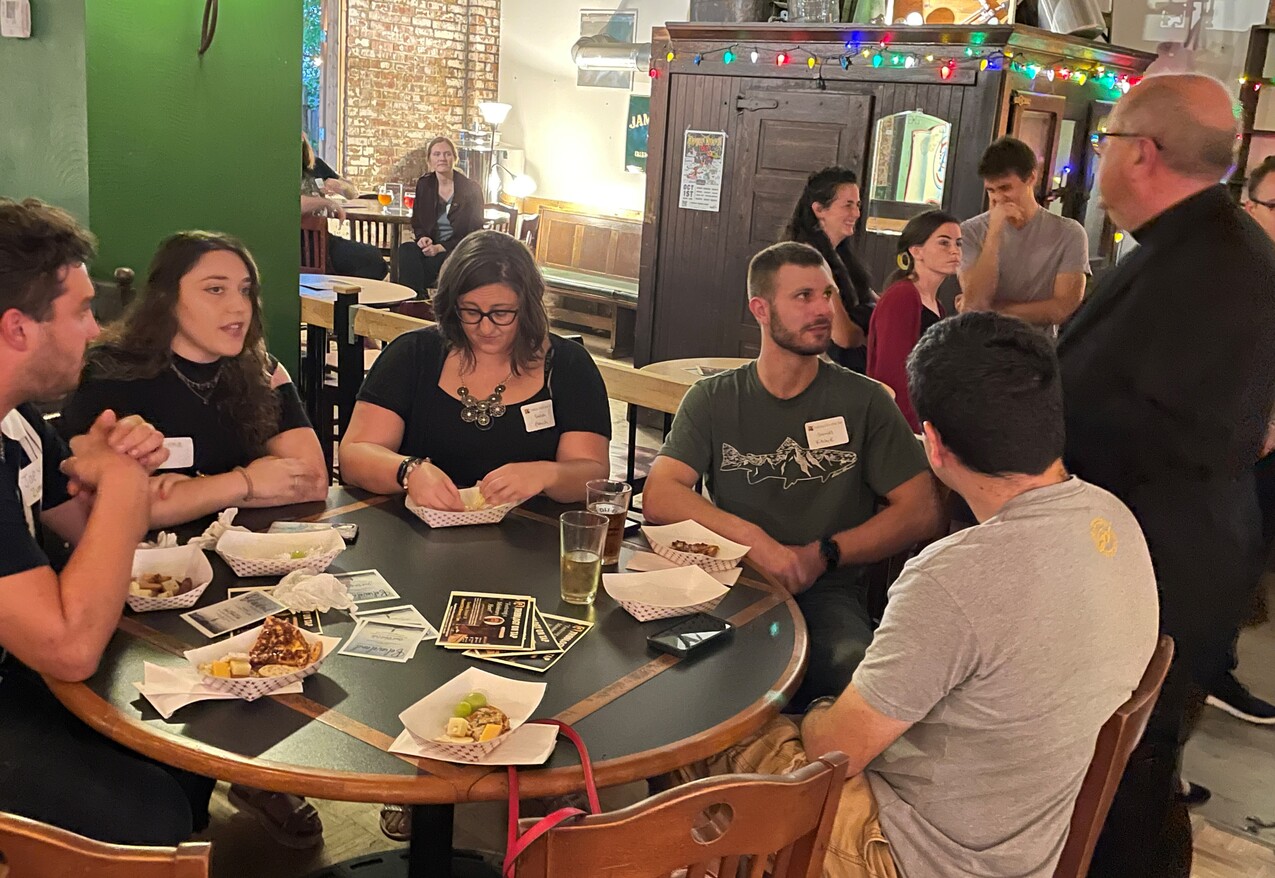 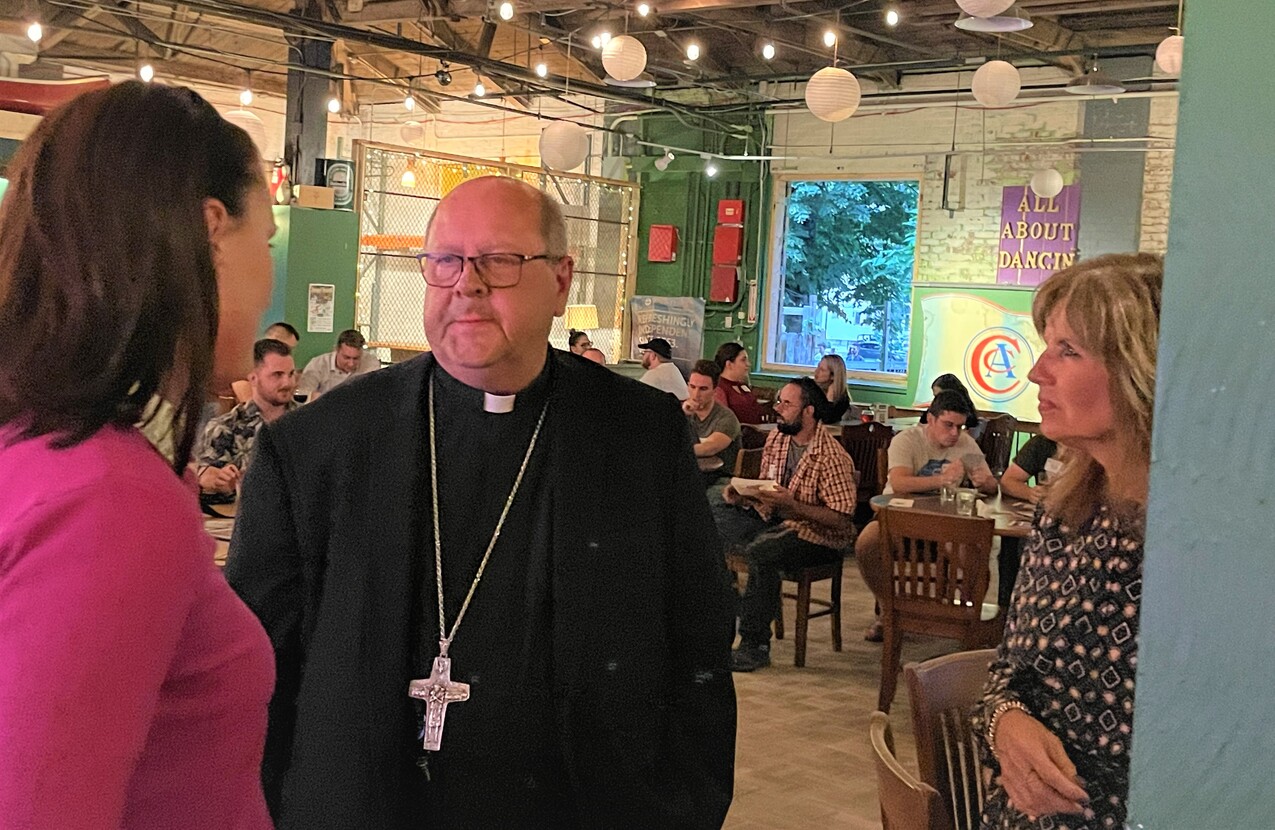 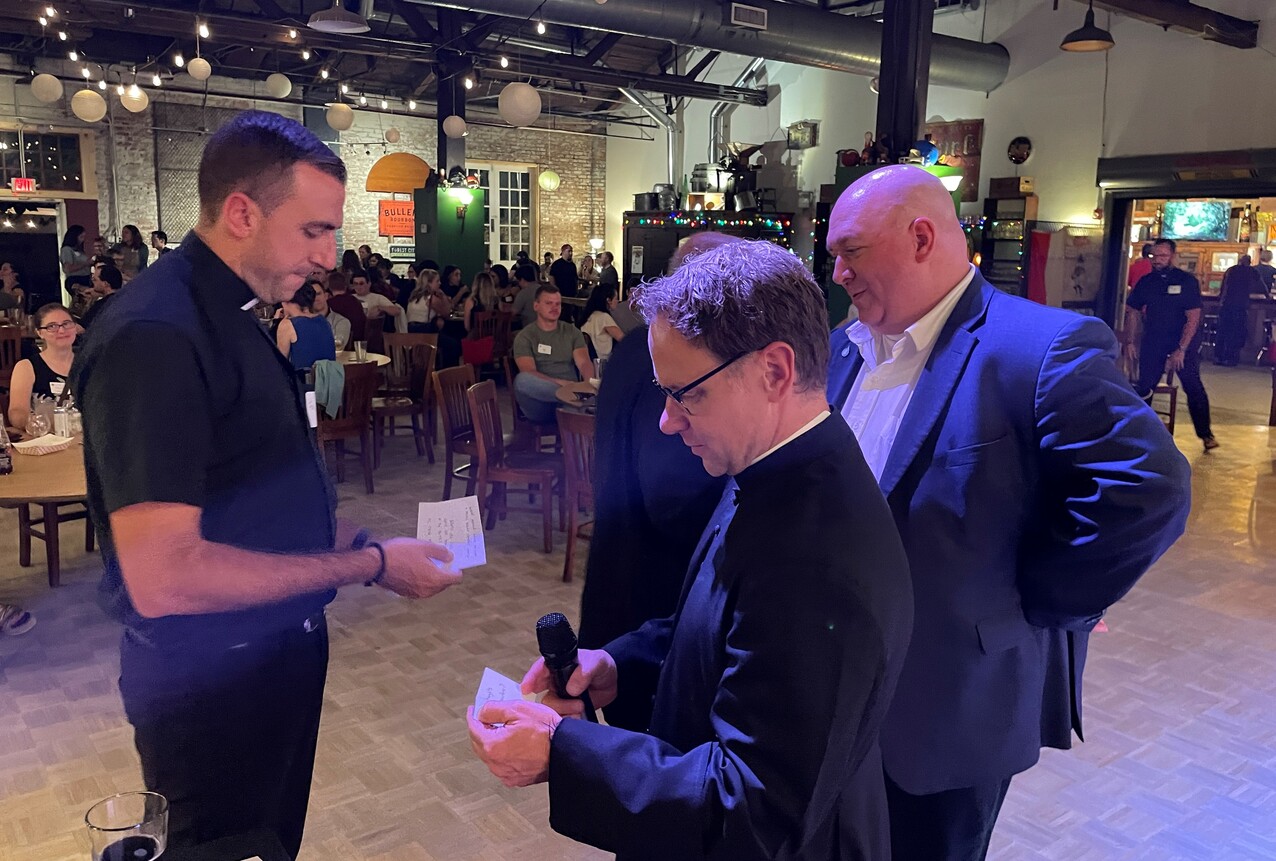 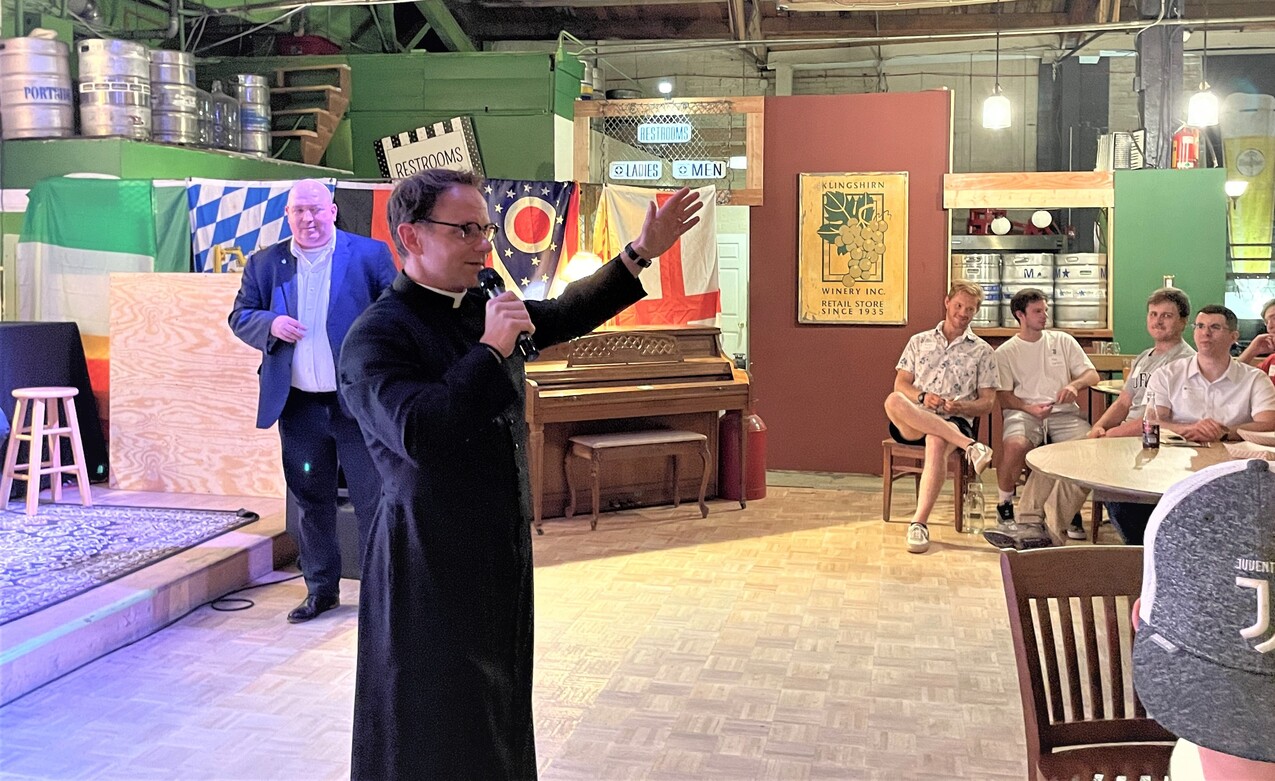 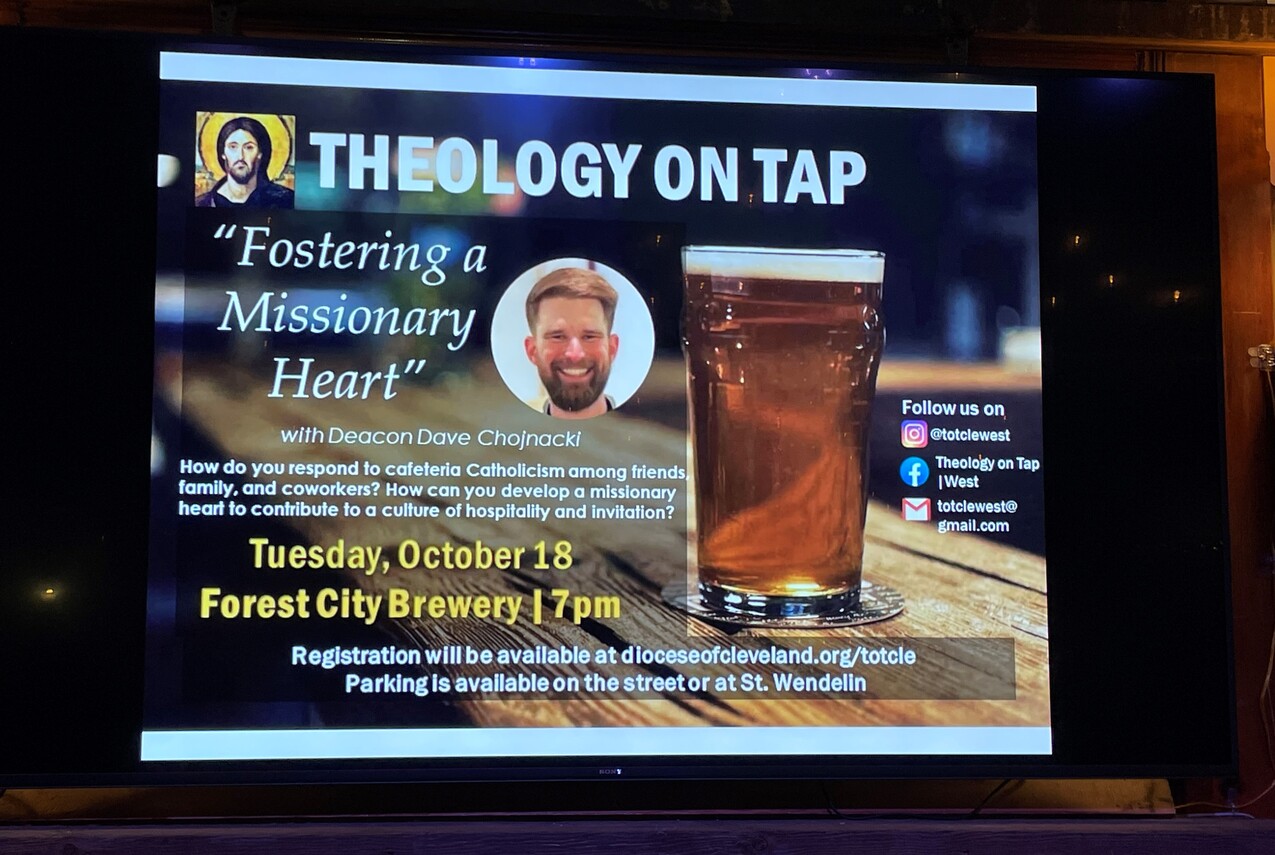 More than 100 people turned out Sept. 20 to have “A Pint with Bishop (Edward) Malesic” at Forest City Brewery in Cleveland’s Duck Island neighborhood. The vibe was energetic as young adults – and a few others – gathered to renew Theology on Tap. The group had been on hiatus, primarily due to the pandemic.

“It’s been 930 days since we last met,” said Father Eric Garris, assistant vocation director and a facilitator for Theology on Tap said as he opened the program. “But we’re back.”

Father Damian Ference, vicar for evangelization and director of Parish Life and Special Ministries, tag-teamed with Mike Hayes, director of young adult ministry, to run the program. Father Ference and Hayes produce a weekly podcast and noted the TOT program was an extension of that, with a live audience.

Bishop Malesic, who just marked his second anniversary as shepherd of the diocese, said he calls the area “Ohio nice. The lawns are manicured; the homes are painted. It’s a reflection of who’s here,” he said, adding the people are “warm, gentle, kind and understanding. You’re not perfect. Only Pennsylvanians are,” he quipped, as the crowd laughed.

The bishop said the diocese has a large school system with about 38,000 students, which is larger than some public school districts. He also credited his predecessor, Archbishop Nelson Perez, who leads the Archdiocese of Philadelphia, with the foresight to separate young adult and young ministry into two separate offices. Before being elevated to the lead the Diocese of Greensburg, Pennsylvania and then the Cleveland Diocese, Bishop Malesic had several years’ experience in campus ministry.

Hayes asked him how to deal with the divisions in the Church. The bishop explained that he tries to “stay in the middle. The Church is a family and it’s rare that there are not differences in families,” he noted. “The Church sets the lines and you need to color within them.” However, he said disagreements and discussions can be healthy and Jesus prays for us to all be one.”

Hayes asked the bishop how he knew what God wanted for him, which prompted the bishop to share his vocation story. He explained he anticipated leaving the Church at some point, but he became an intentional disciple in college and began looking seriously at what the Catholic Church teaches. “And it all began to make sense,” he said.

“Celebrating Mass excites me,” he said. “Ask God what he wants you to do and see where the Lord takes you.”

Father Ference asked if the bishop had any science and religion books he would recommend. Bishop Malesic said Bishop Robert Barron of the Diocese of Winona-Rochester, Minnesota and founder of Word on Fire ministries, offers some books on both topics. “Science and faith go hand in hand, like the two wings on a plane. You need both,” the bishop said. Some people may look at God as a mythological being but he’s a spiritual power, he said pointing out the relationship between religion and science.

Bishop Malesic also talked about the three-year Eucharistic Revival that kicked off this summer. He said the Church is placing an emphasis on the Eucharist since many don’t understand the real presence of Christ in the Eucharistic.

Father Ference and Hayes spent several minutes asking the bishop a series of questions, including the best and worst things about being a bishop: a rich understanding of the Church, the opportunity to meet the pope. But he said while he never wanted to be a bishop, he is blessed to have been chosen. As a pastor/parish priest, he knew his parishioners intimately. However, as a bishop, he is responsible for the spiritual well-being of many more people.

He also was asked the best and worst things about seminary life. “I liked the structure. The liturgies were the best. It was predictable,” he said. The worst part was what he called “liturgy wars.”

When asked what he missed most about Pennsylvania, he said his family and priest friends.

What does Ohio have that Pennsylvania does not? “A place to ski,” he quipped, noting Ohio’s terrain is much flatter than his home state, which has many hills and some mountains.

When asked what Cleveland has that Pennsylvania doesn’t have, he mentioned Playhouse Square. “I never thought I could walk, to see a major Broadway play,” he said, noting he lives downtown and is a short walk from the theater district, a short drive to hear the Cleveland Orchestra and he loves living near the water (Lake Erie). “But I wanted there to be palm trees,” he quipped, noting his love of warmer temperatures.

As for favorite foods, the bishop admitted he likes pizza and carbs, things he has to eat in moderation.

“What was young Ed Malesic like?” he was asked. “Good,” he replied, smiling. He had a newspaper route as a boy and said he often spent time visiting with his customers.

The group also learned he prefers the sound of the ocean to nails on a chalkboard.

Asked what he admired about another religion, the bishop quickly answered he likes the sense of faith and history in the Jewish religion/.

His vision for young adult ministry is that it must be Christ centered and we must resist the devil and outside forces that try to pull us apart.

Regarding the traditional Latin Mass, the bishop said there is a place for it and many people find it to be a good spiritual experience.

The evening wrapped up with a rapid-fire session during which the audience learned that St. Thomas More, St. Francis of Assisi, St. Therese of Lisieux, St. Padre Pio and Pope St. John Paul II were his favorite saints and blue is the color that best describes him.

“It’s an honor to be here. I admire you,” the bishop said, noting it’s not easy to be Catholic today. “Don’t let the devil get the best of you. Be proud of your Church and remember we all belong to the body of Christ.”

The next TOT will feature Deacon Dave Chojnacki discussing “Fostering a Missionary Heart” at 7 p.m. Oct. 18 at Forest City Brewery.