Educator Richard Clark remembered for his love of faith, family and contributions to Catholic schools 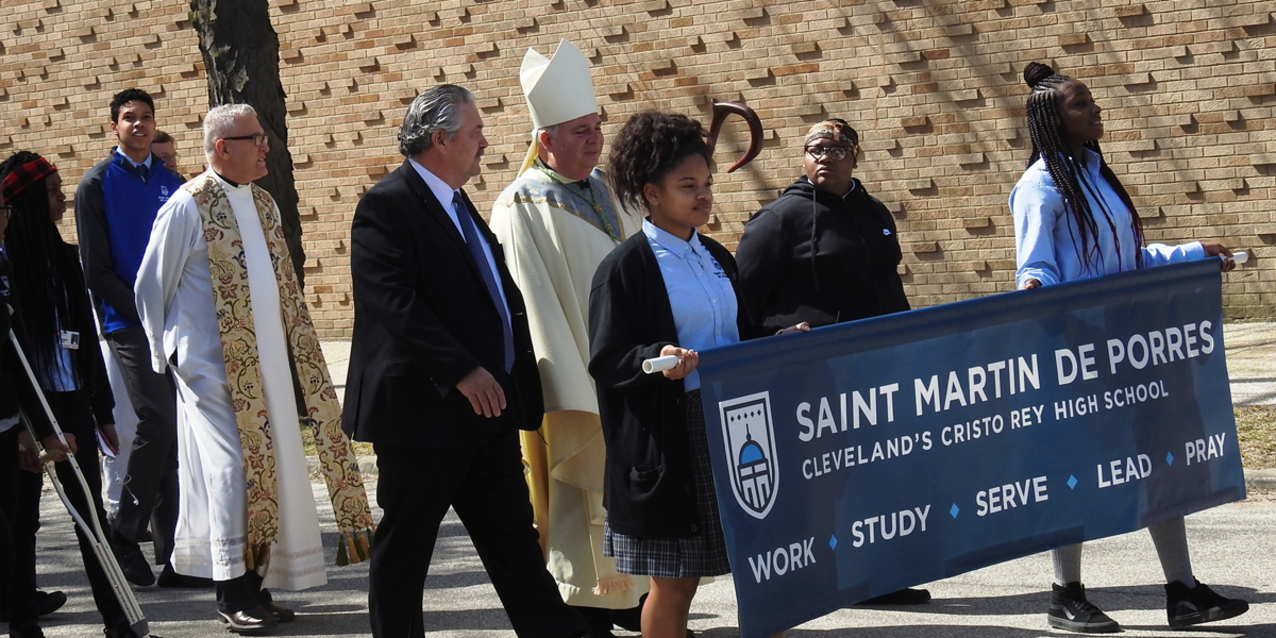 Hundreds turned out on Sept. 26 to remember Richard Clark during his funeral Mass at St. Vitus Church in Cleveland. Many prominent Jesuit priests concelebrated the Mass, which also was attended by Bishop Edward Malesic. The liturgy was livestreamed.

Survivors include his wife of 39 years, Moira, president of Magnificat High School; sons Will (Brittany) and Kevin and daughter Bridey; grandson Connor; siblings Maureen Delgado and Bill; and many friends. He was predeceased by his parents and a son, Colin.

A Boston, Massachusetts native, Clark grew up in Chicago, Illinois. He attended Georgetown University, graduating with a bachelor’s degree in theology. He also earned a master’s degree in religious education from Loyola University in Chicago.

His friend, Father John Foley, SJ invited Clark and several other friends and Jesuit educators on a trip to visit the Faith and Joy Schools in Peru, where Father Foley previously ministered in school leadership for many years. During that visit, the structure and mission of what became the Cristo Rey Network began to form. The network’s slogan and mission are “Transforming Urban America One Student at a Time.”

After the trip, Clark recalled feeling moved by the concept. When he returned home, he prayed and reflected on the steps needed to bring such an opportunity to students of modest means in Cleveland. He sought guidance from Father Robert Welsh, SJ, then Saint Ignatius president, who supported the idea. After obtaining support from individuals and corporations to help launch the school, Clark also sought permission from the late Bishop Anthony Pilla.

In September 2004, Saint Martin de Porres High School opened in Cleveland with 105 students – and Clark as president. One of his proudest moments was opening the newly built building at St. Clair and Norwood avenues. He and then-Cleveland Bishop Nelson Perez led the student body to nearby St. Vitus Church for a Mass to celebrate the building’s blessing and dedication in 2018. There are more than 1,000 SMDP alumni. 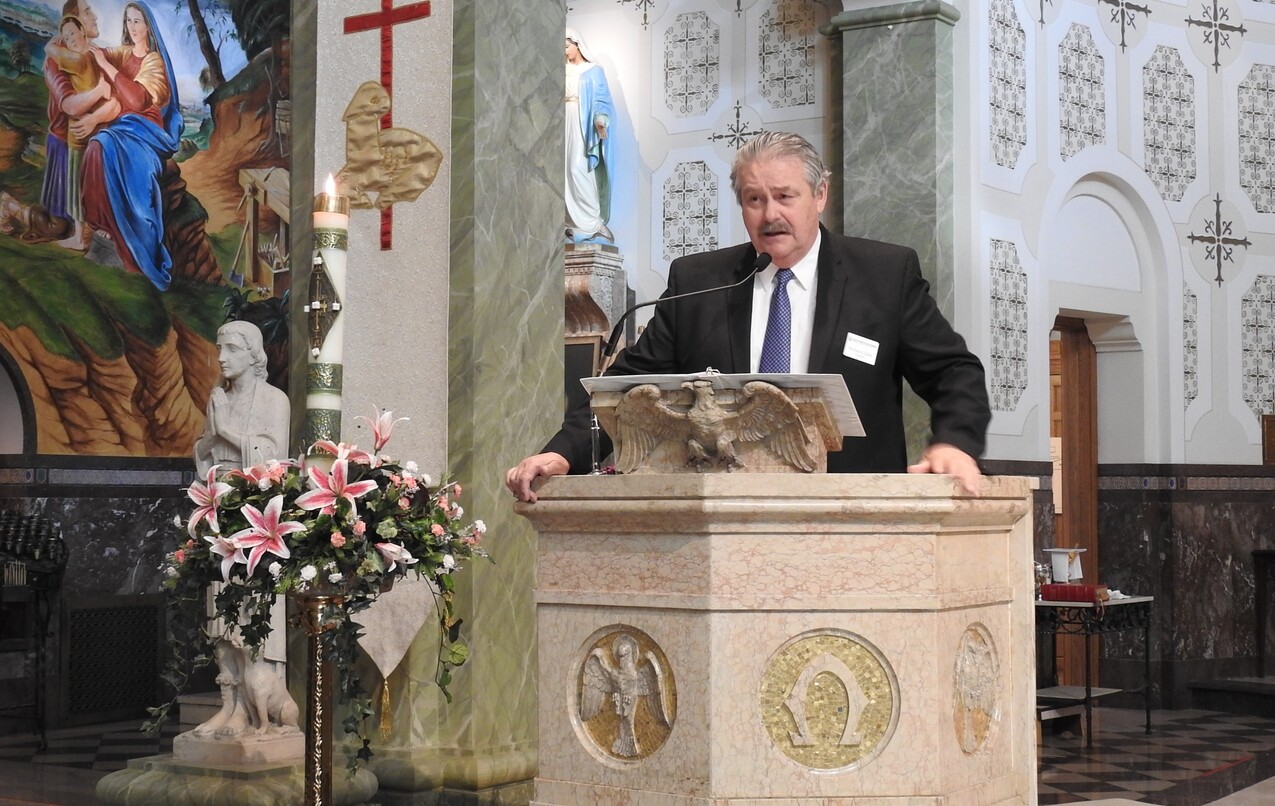 Clark took on a new challenge in 2020, when he helped bring Partnership Schools, a Catholic grade school management organization, to the Cleveland Diocese. Archbishop Lyke and St. Thomas Aquinas schools were the first replication of the successful network of Catholic grade schools. Later, Metro Catholic School and St. Francis School became part of the group. All four schools are in Cleveland.

Kafka said she and the Partnership Schools organization are grateful to have been able to witness Clark’s deep commitment to the city of Cleveland, “and the way Rich built community and friendship through his work. Rich’s talent for making friends has been exceeded only by his knack of enlisting those friends on behalf of the children he cared for so much. He formed us all into a community that he inspired, dared and even hounded into sharing his zeal, and together, we mourn him deeply.”

During his homily at the funeral Mass, Father Foley used the following comment from St. Irenaeus several times to capture Clark’s personality: “The glory of God is a man fully alive.”

Father Foley said Clark lived his life fully, always excited about cooking, teaching, baseball and his family. “Did you ever see him not excited or do something half-heartedly?” he asked. “He reminded me of St. Paul. He was literally a go-getter,” he said. While preparing for the homily, Father Foley said it was difficult to think of a time when Clark didn’t bring a smile to his face or make him laugh.

Remembering a biblical quote attributed to Jeremiah, Father Foley said often out of the blue Clark would say, “You duped me, O Lord, and I let myself be duped … God, of course, is the ‘super-duper.’”

Another story he shared was about the time the Cristo Rey Network, of which Father Foley served as president, was receiving an award from the National Catholic Educational Association at a swanky hotel in Washington, D.C. It was a formal event and he said Clark showed up in a tuxedo, but he was struggling as he walked across the lobby. “I looked down at his feet and he was wearing black patent leather shoes. But both were for the left foot,” he said, adding how Clark tried to figure a way to make the situation less noticeable, as the congregation laughed.

On a more serious note, Father Foley said Clark called him one day and asked if he’d ever read Chapter 9 of the Acts of the Apostles. “I said, ‘I guess so’ and he said, ‘Read it. It’s about us.’” The passage tells about St. Paul being knocked from his horse and hearing a voice tell him to go into the city where he will be told what to do. 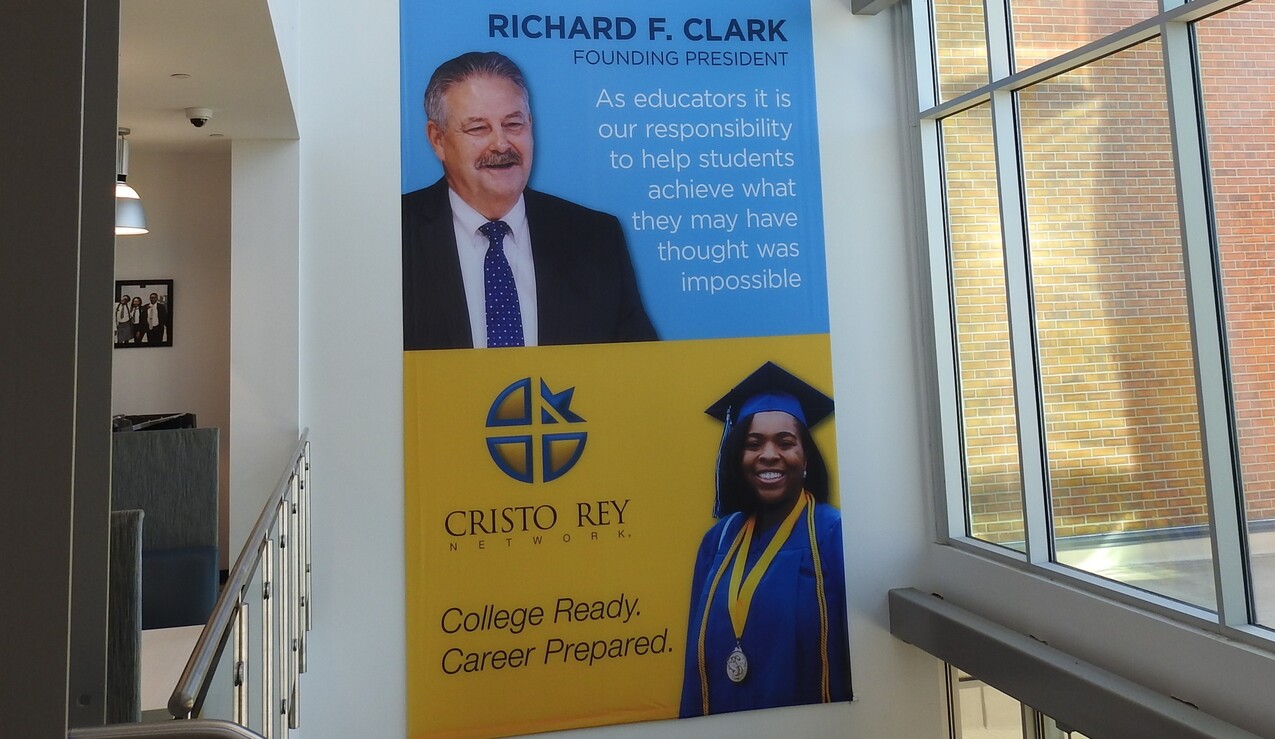 “It’s the resume of the Cristo Rey schools,” Father Foley said, noting the network focuses on helping inner-city students who are falling behind in their schoolwork and preparing them for college. He said he first Cristo Rey principal said they would be successful because “the students will tell us what works and what doesn’t work.” There is a tremendous lesson about not waiting until you are ready to do something, Father Foley said, asking, “How much good is never accomplished because we’re not ready?”

“Rich, we love you and there’s nothing you can do about it. May God be with Rich as he passes from this life."