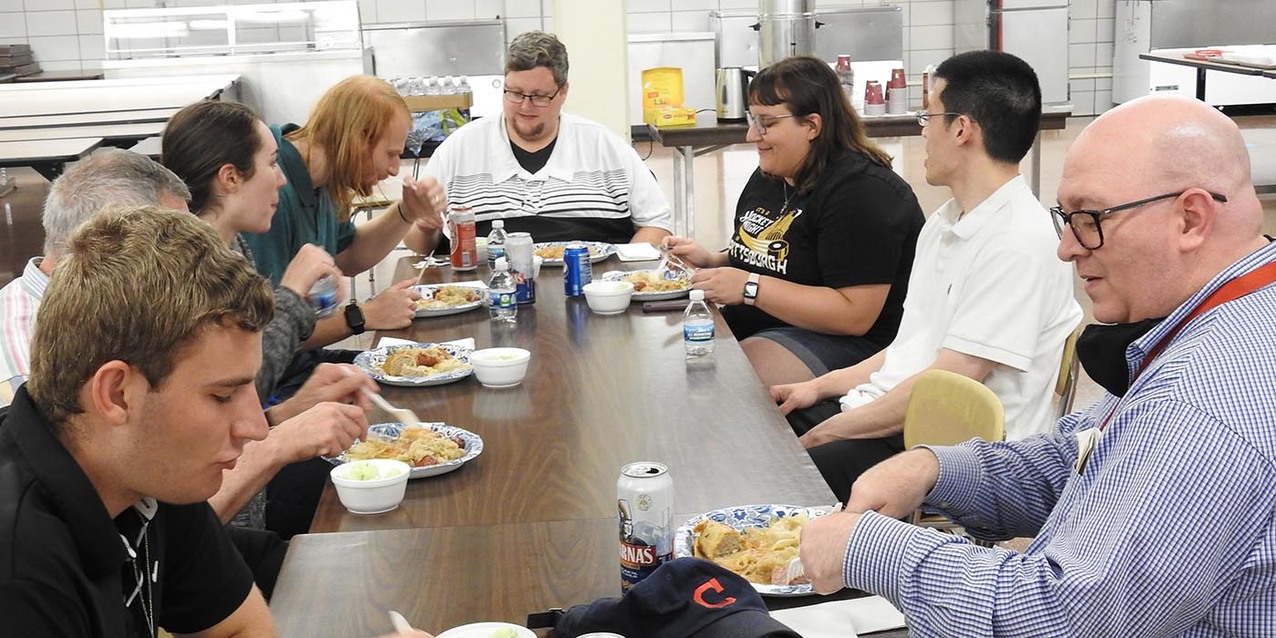 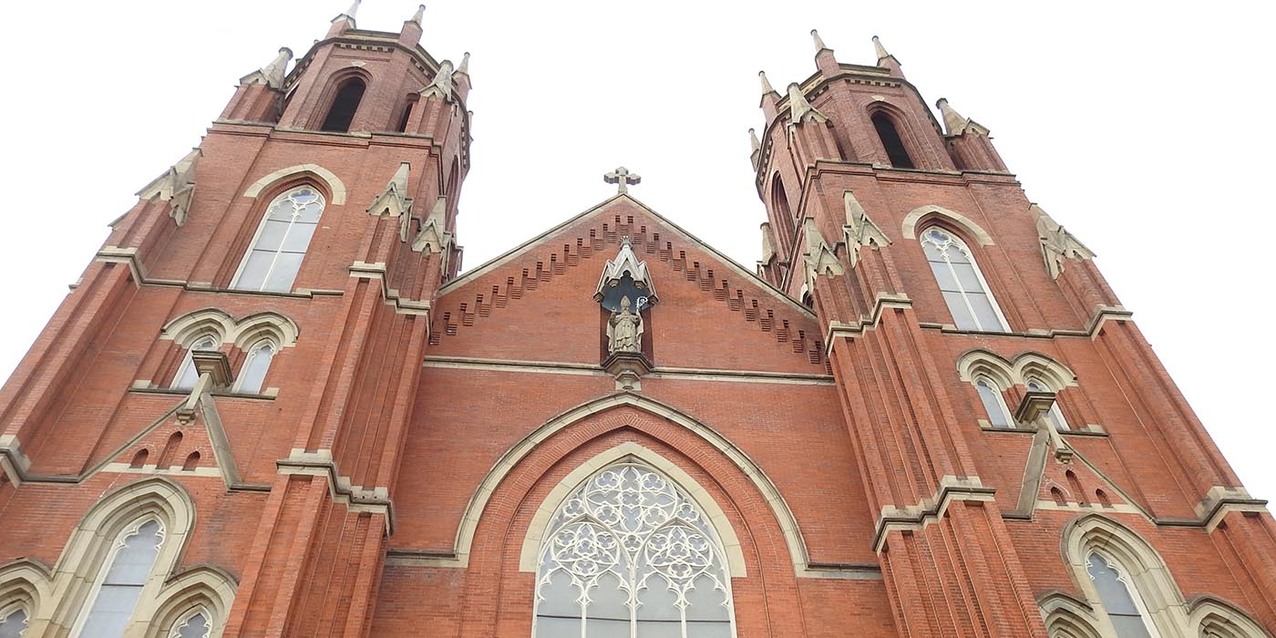 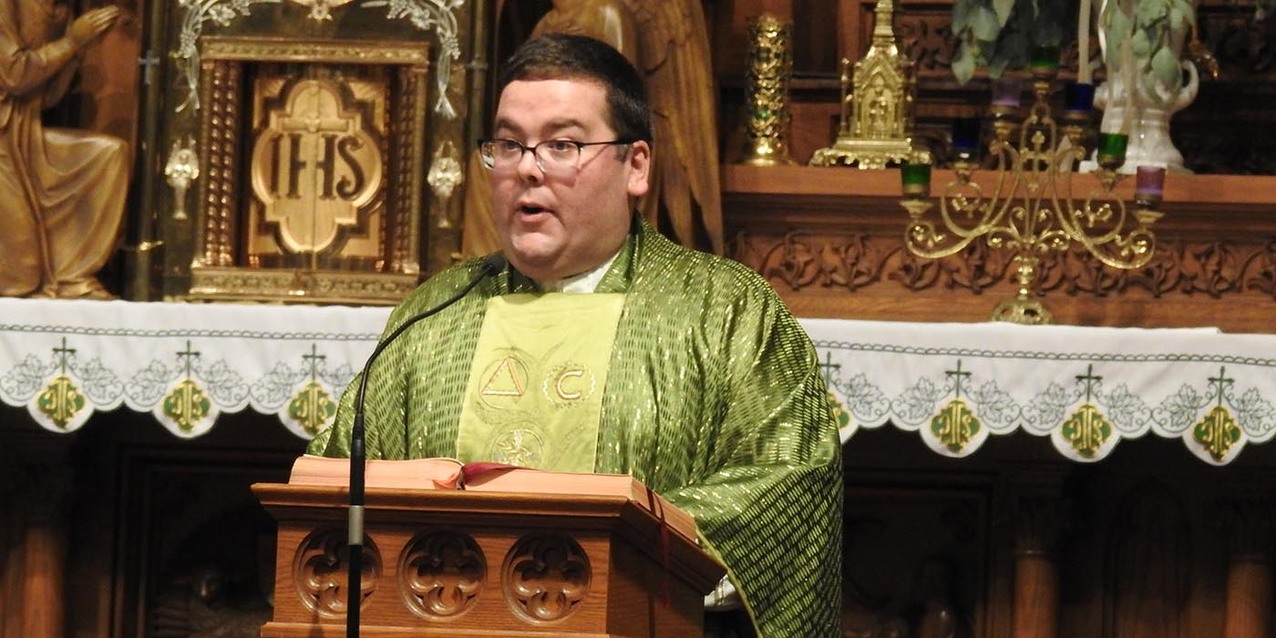 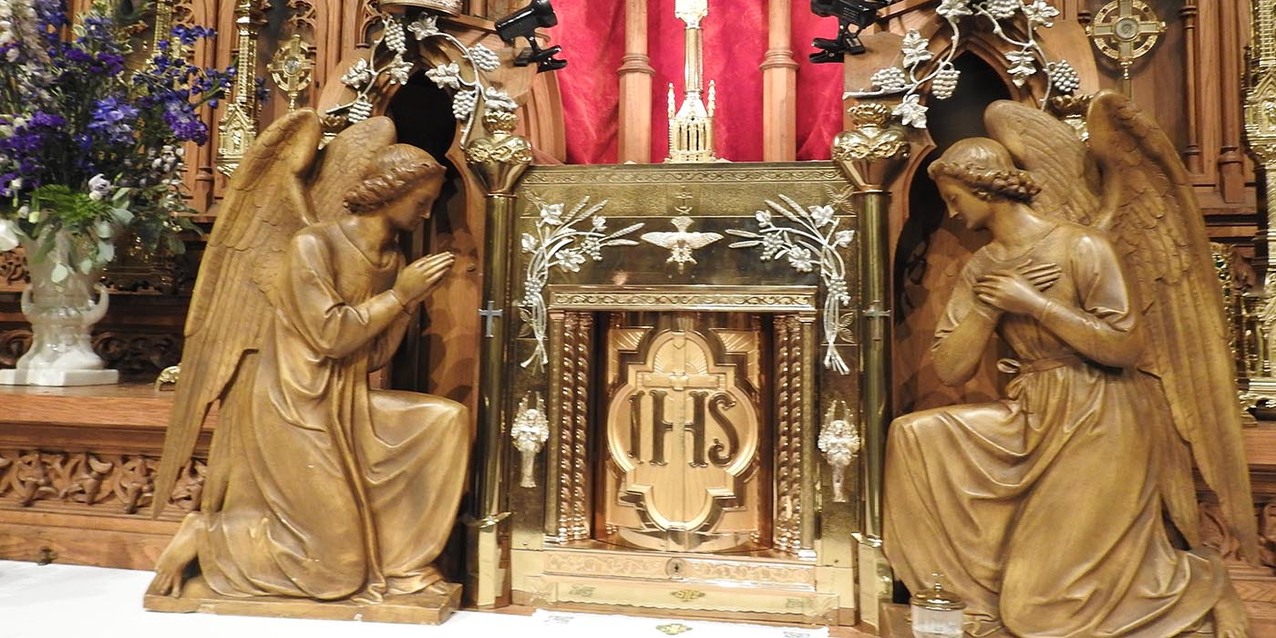 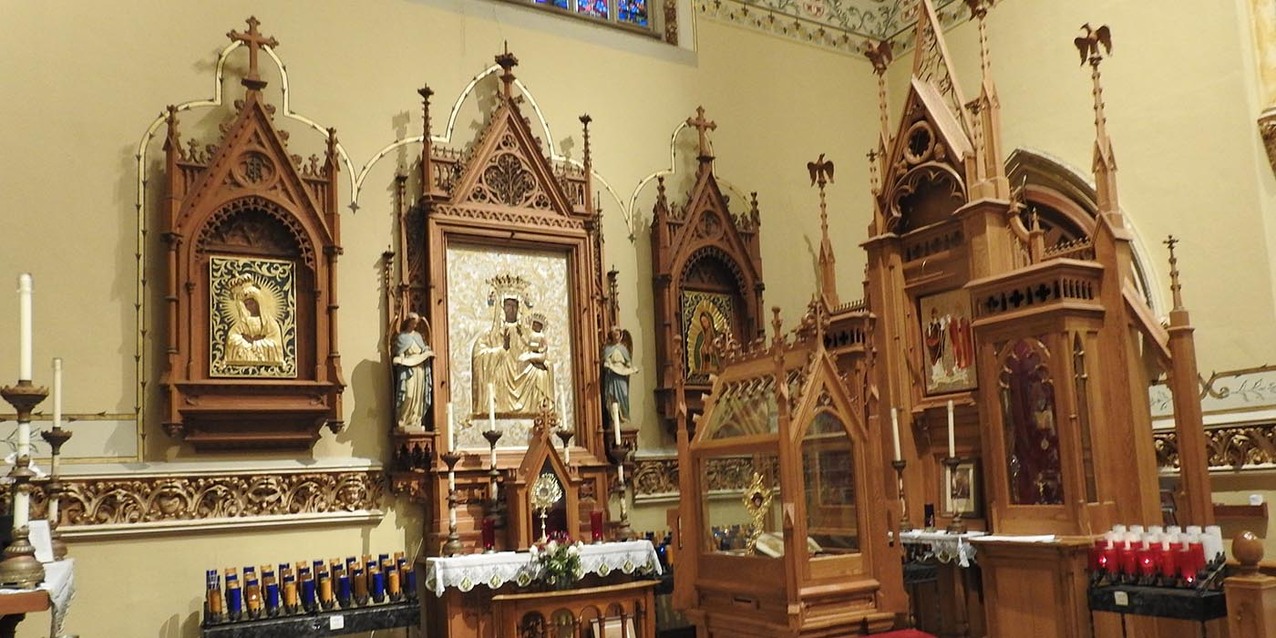 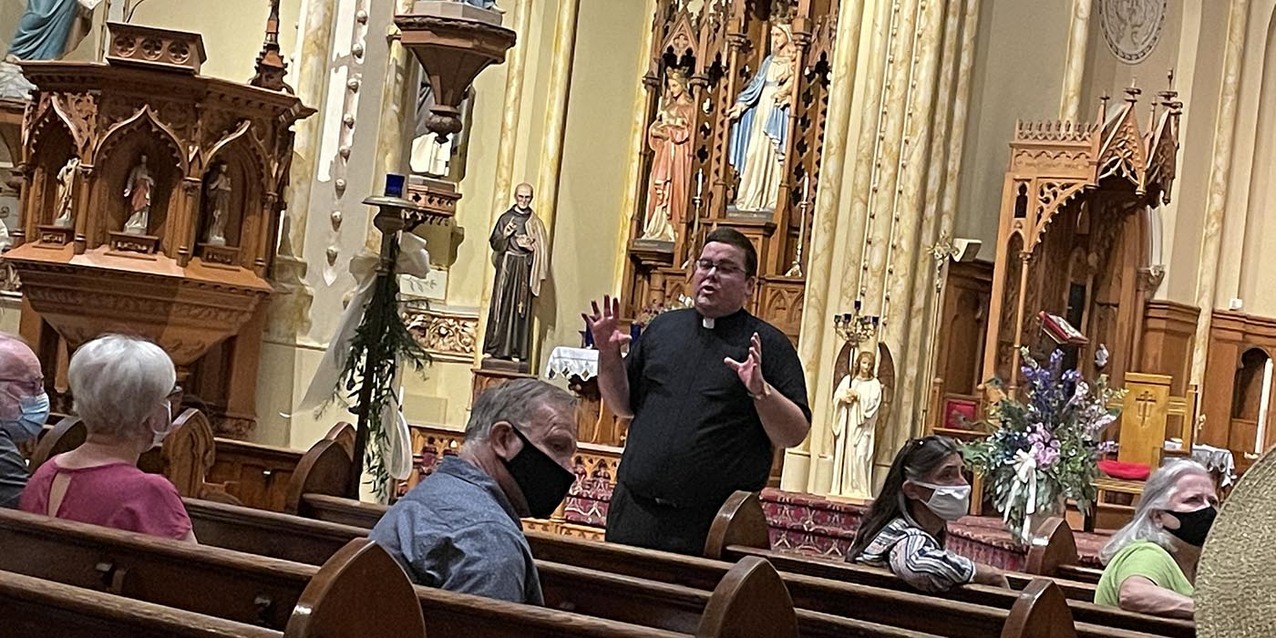 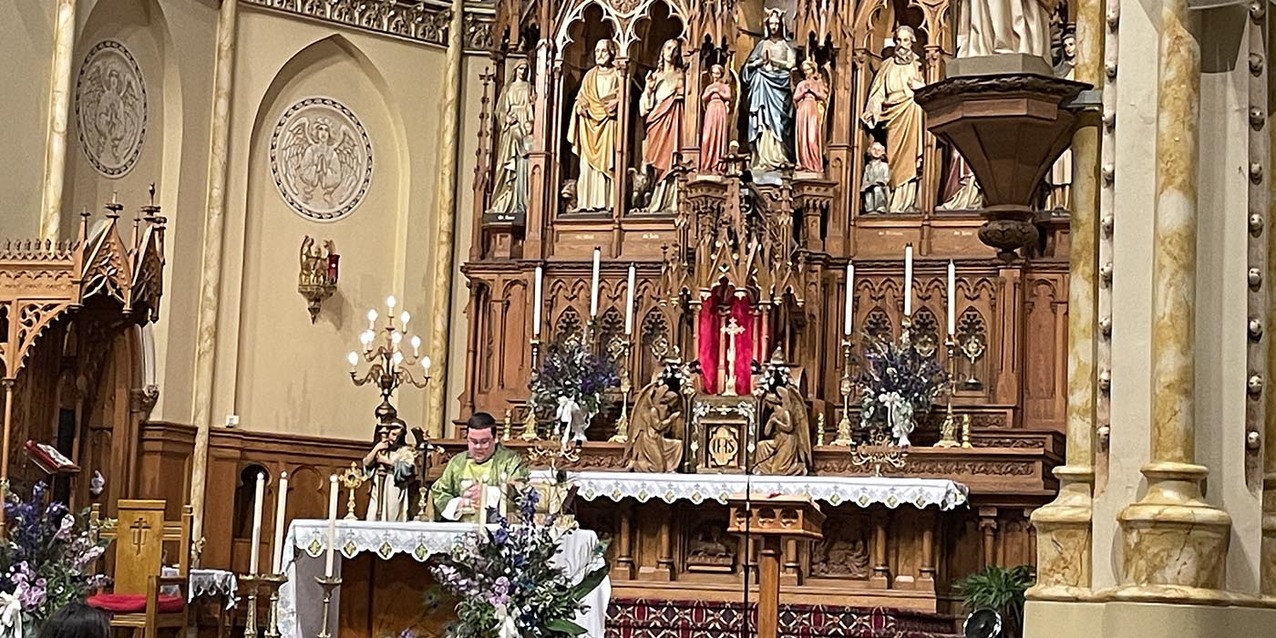 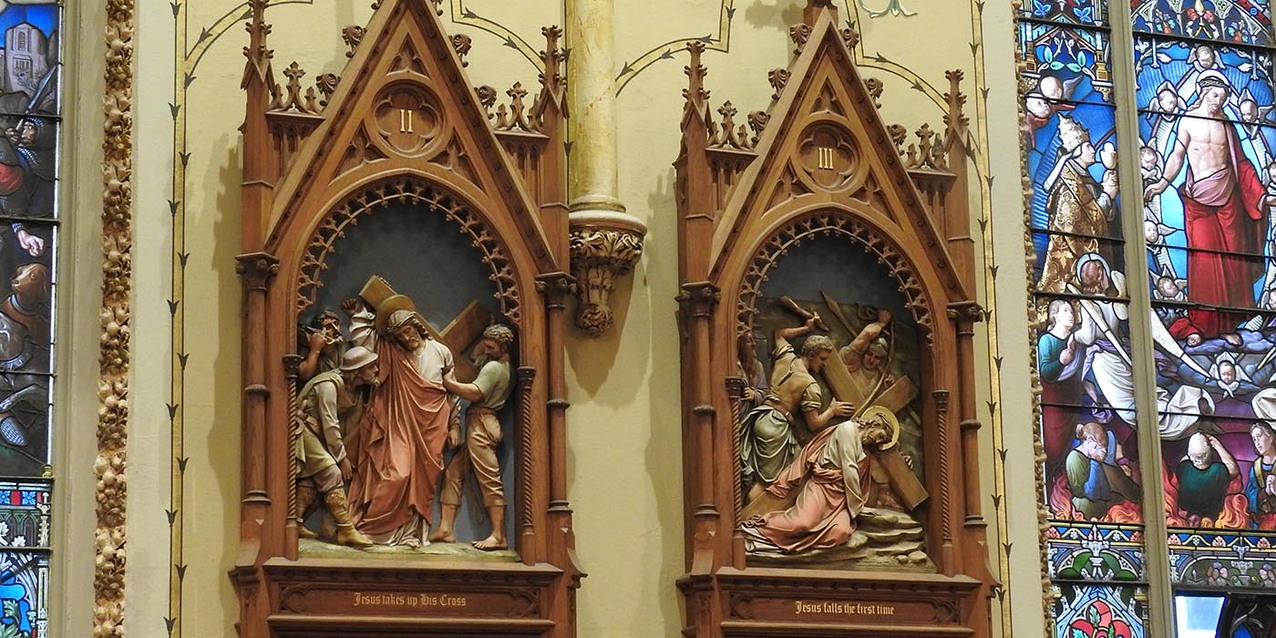 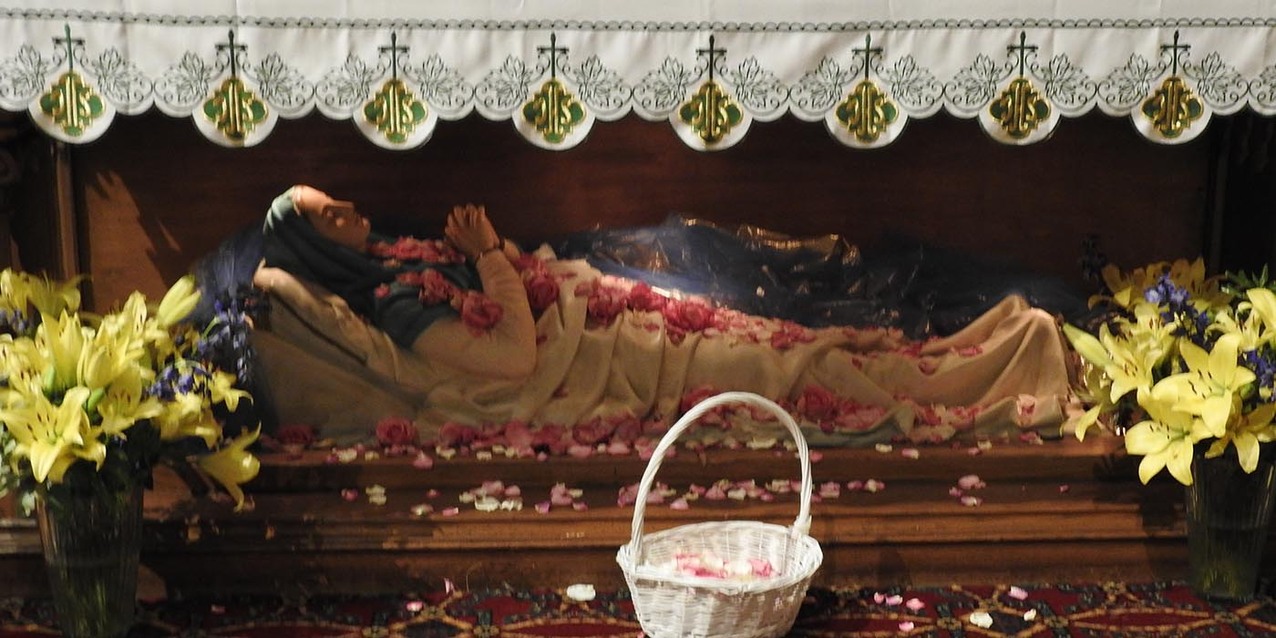 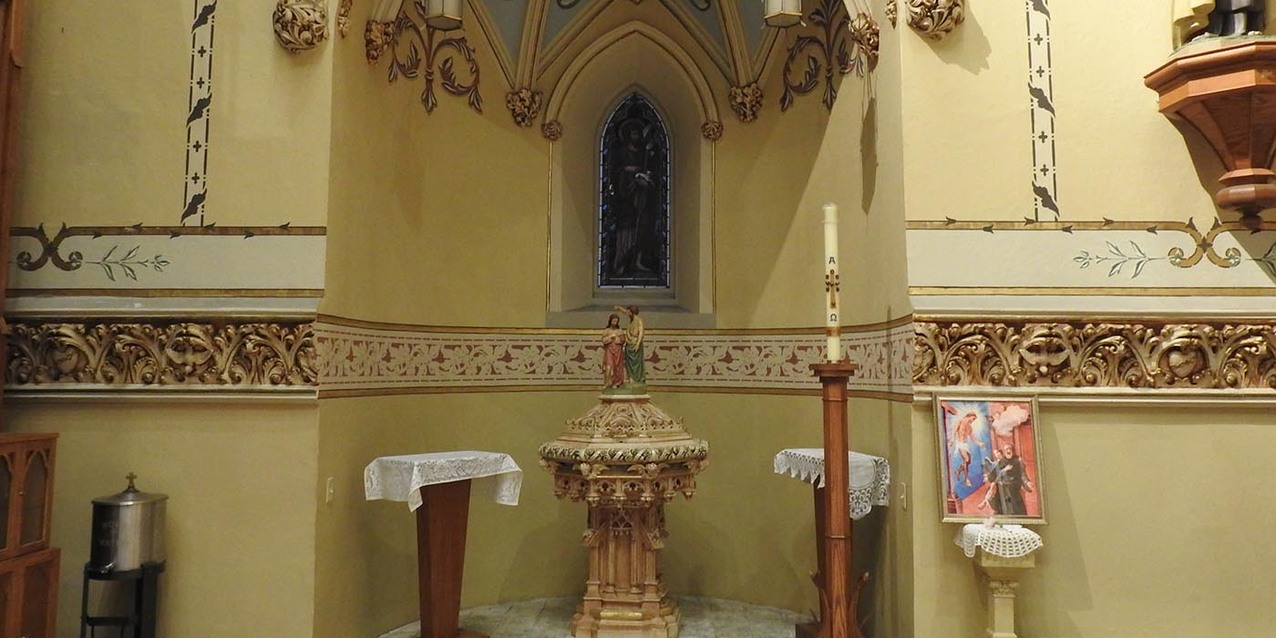 The Young Adult Ministry of the Catholic Diocese of Cleveland extended an invitation to join them for Mass, a church tour, food and fellowship.

The event, hosted by the Shrine Church of St. Stanislaus, Bishop and Martyr in Cleveland’s Slavic Village neighborhood, offered an opportunity to learn about the historic church.

Father Rob Ramser, parochial vicar at St. Angela Merici Parish in Fairview Park, and a son of St. Stanislaus Parish, embraced the opportunity to share the significance of his home church and to extend its hospitality.

The Aug. 17 event with Mass at 7 p.m., followed by a church tour. It ended with a buffet of homemade Polish food and fellowship in the parish social center across the street.

In his homily, Father Ramser reminded the congregation that “nothing is impossible for God. Money and prestige leave us empty,” he said, adding the challenge is whether Jesus is enough for us.

“It’s difficult because the world is a mess,” he said, asking, “What is it that Christ gives us? Let him take away some of our fear and worry. He wants us to know and love him – to be fully bathed in his glory. He can make us spiritually rich and to let us know whose we are.”

After Mass, Father Ramser pointed out some of the highlights of the church, which was built by the Polish immigrants after the parish was established in 1873. He said early parishioners worshiped in the abandoned St. Mary’s on the Flats Church, with a Polish priest from St. Adalbert Parish in Berea providing for their spiritual needs.

Thousands of Poles answered the call for workers at the Newburgh Rolling Mills and arrived in the area, which necessitated a larger worship space.

The Franciscans took over care of the St. Stanislaus parishioners in 1879 and moved the worship center to St. Joseph Church on Woodland Avenue in Cleveland.

The congregation continued to grow and needed their own place of worship. Farmer Ashbel Morgan sold 13 lots to the parish for $3,000. “The place where this church now stands once was a potato patch,” Father Ramser said.

The first church was a small building with a school on the first floor and the church upstairs. By 1885, with 600 families in the parish, a larger structure was needed.

The cornerstone for the current church was laid in 1886 and the building was finished five years later at a cost of $250,000. Father Ramser said the Gothic-style structure “is the mother church of the Polish people of Cleveland.”

The church literally was built by the people of the parish, he said, which saved a considerable amount of money and added to the pride in the church. The original structure was built entirely of brick and wood with no metal, he said, which also helped to keep costs down. It would cost about $65 million to build the church today, Father Ramser said.

The parishioners wanted their church to be something they could be proud of, Father Ramser said, “and to be a little bit of heaven on earth – a promise of what is to come.” Originally, the church had gas lighting, with electricity added later. The church is essentially the same as when it was built. A major renovation took place in 2000, which restored the interior, making it brighter after more than a century of use.

In 1969, Polish Cardinal Karol Wojtyla, later Pope St. John Paul II, visited the church. A special shrine in his honor – added when he was beatified – includes one of his miters and a first class relic. “This was also the first church to add a halo to his image after his beatification,” Father Ramser said. He told the group that people sometimes leave things in gratitude for answered prayers.

In 1909, a tornado destroyed the church’s twin spires – which were 232 feet high – and heavily damaged the roof, windows and the organ. The steeples had been a landmark for immigrants seeking the church. Parishioners rebuilt the damaged church within a year, but the city would not allow the steeples to be rebuilt to their original height. The current spires are 122 feet tall.

In 1913, the current rectory was built and in 1918, a convent was constructed for the religious sisters who staffed St. Stanislaus School. The current school building dates to 1907.

Father Ramser pointed out that male saints’ statues are on the right side of the church and the female saints are on the left. A new Divine Mercy Shrine is being developed on the left side of the church. He also pointed out under two side altars – the Crucifixion Altar and the St. Joseph Altar – in “tombs” are life-size statues of Jesus and Mary in repose. The Crucifixion Altar includes the all the elements of the suffering, sorrow and death of Christ. The statue of Mary, under the St. Joseph Altar, is covered in rose petals each year for the feast of the Assumption.

He also pointed out the tabernacle on the high altar, explaining the decorations on the edges and door were made from flash bulb filaments carefully gathered, flattened and fashioned into the decorative pieces by a Franciscan brother who served the parish as a sacristan for many years. He also made hosts for the church.

Parish records show that 127 men and women have entered the priesthood or religious life from St. Stanislaus. The most recent was Father Ramser, who was ordained by the late Bishop Richard Lennon in 2015.

The Franciscans served the parish until 2012, when the diocese took over pastoral care. Father Eric Orzech is pastor of St. Stanislaus and nearby St. Casimir Parish.

Click here for more information on the parish and its history.