Bishop Pilla remembered for his kindness, love as he is laid to rest 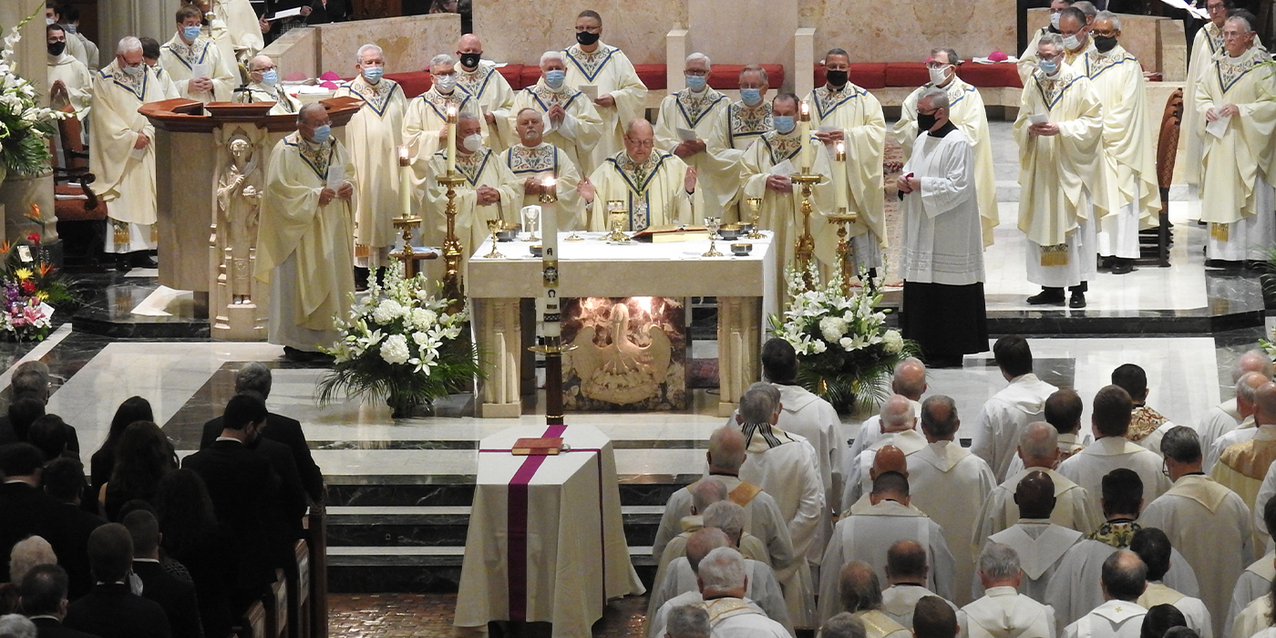 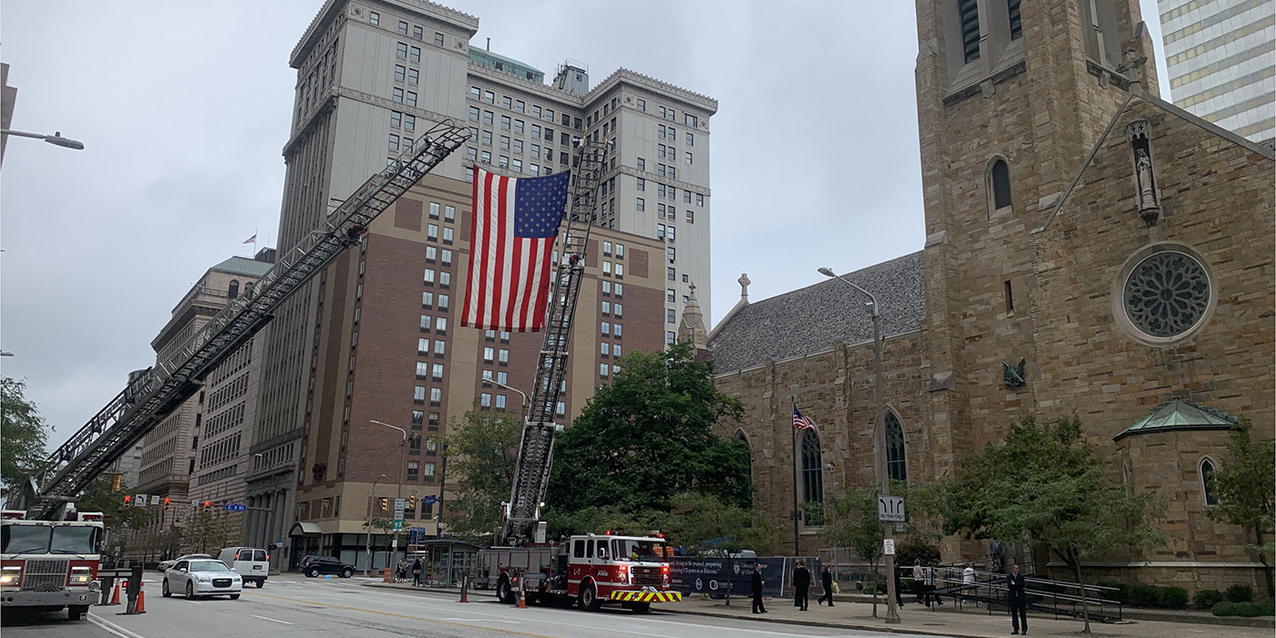 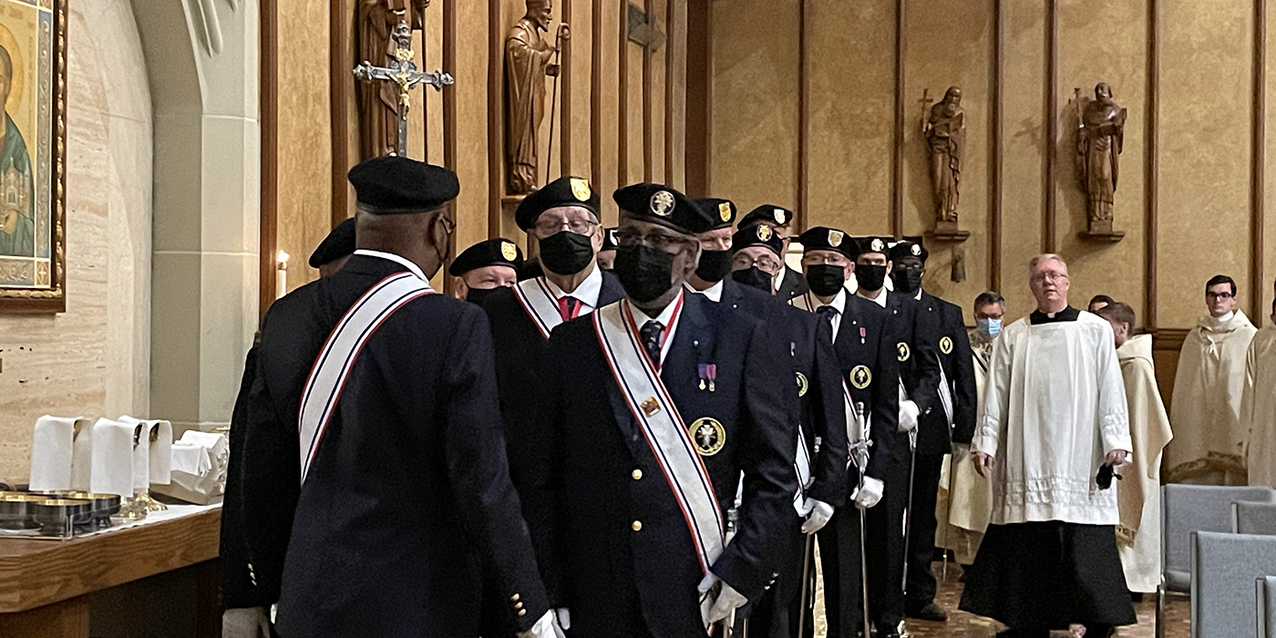 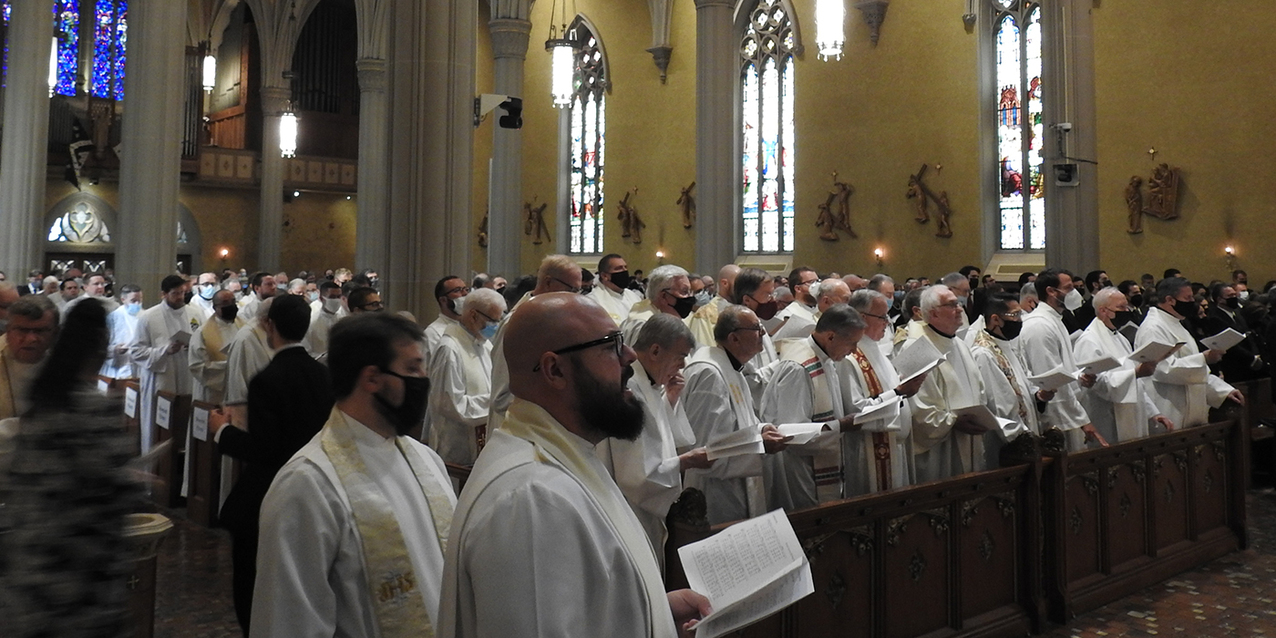 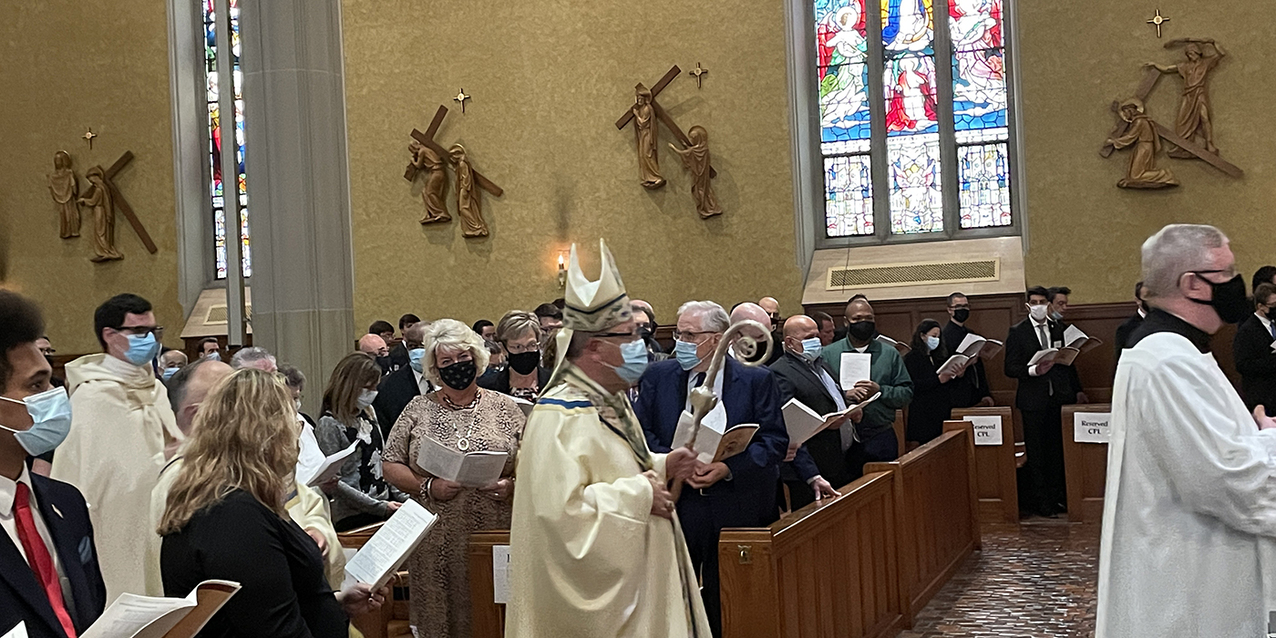 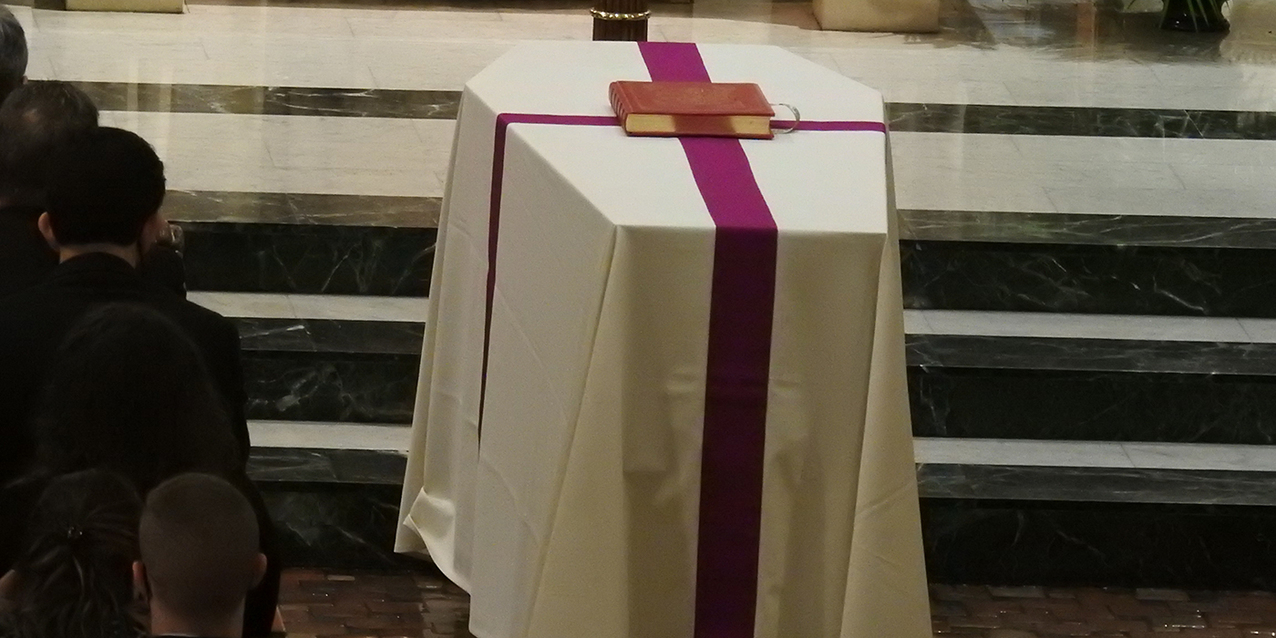 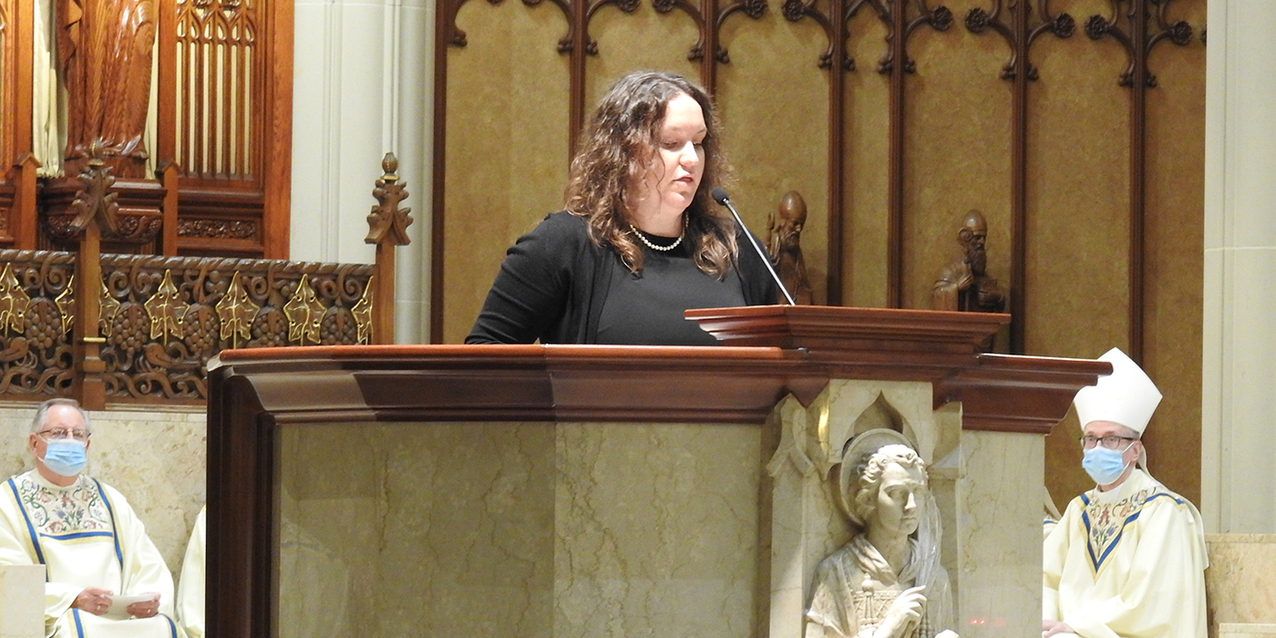 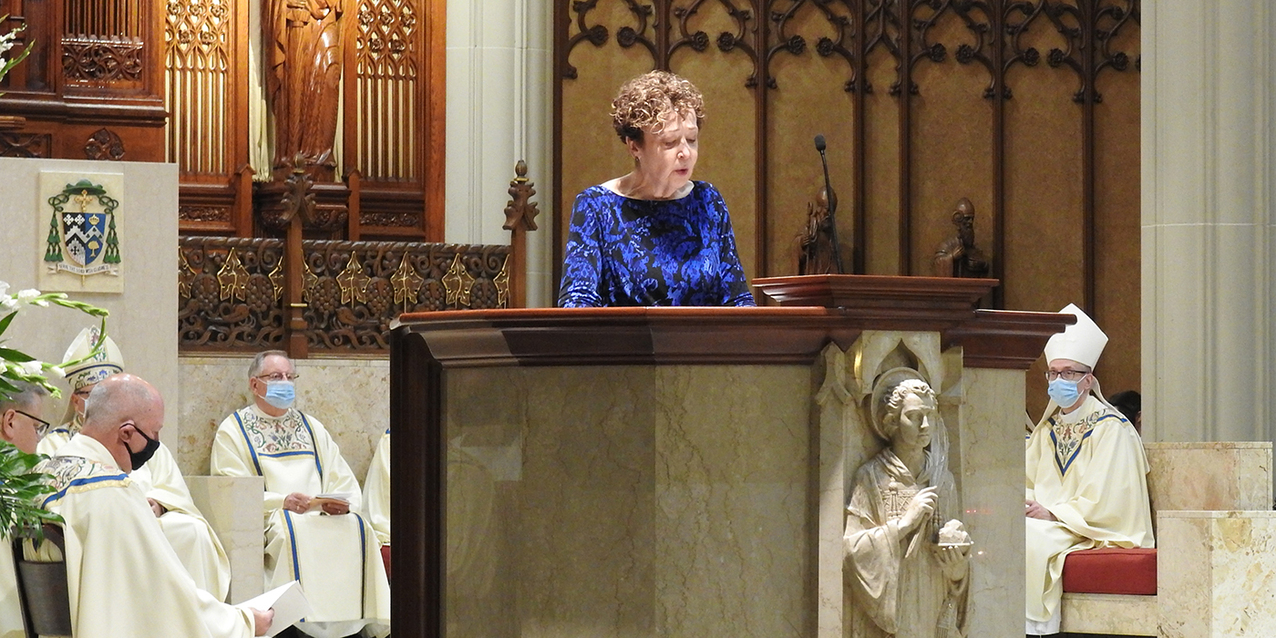 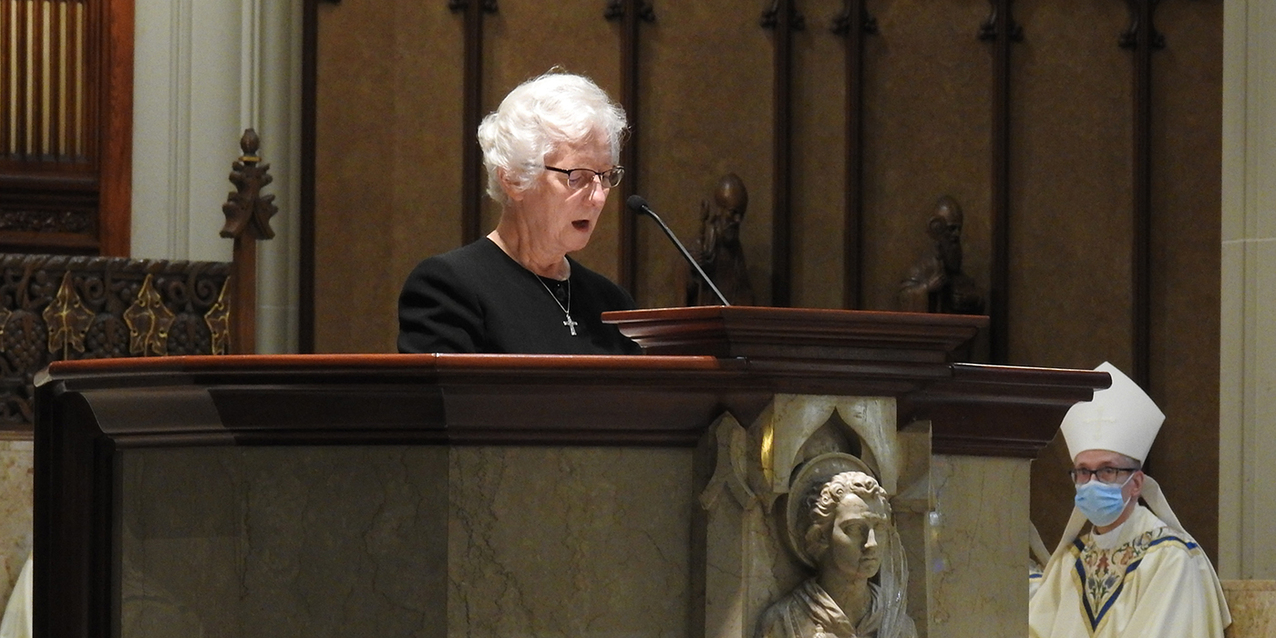 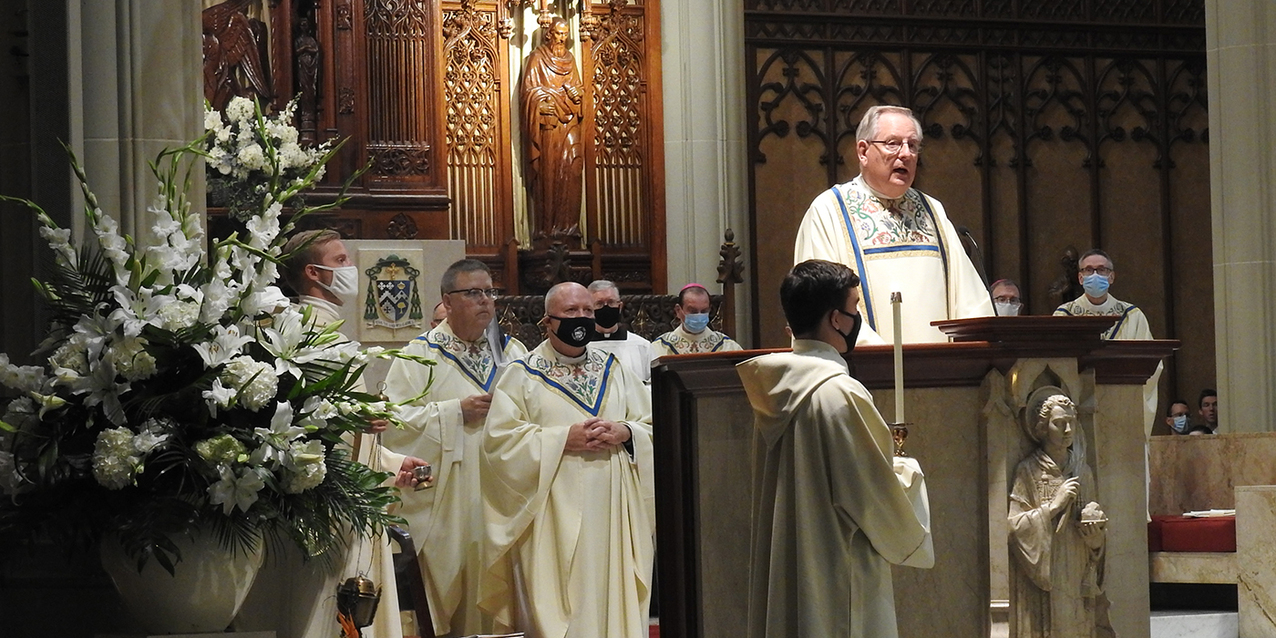 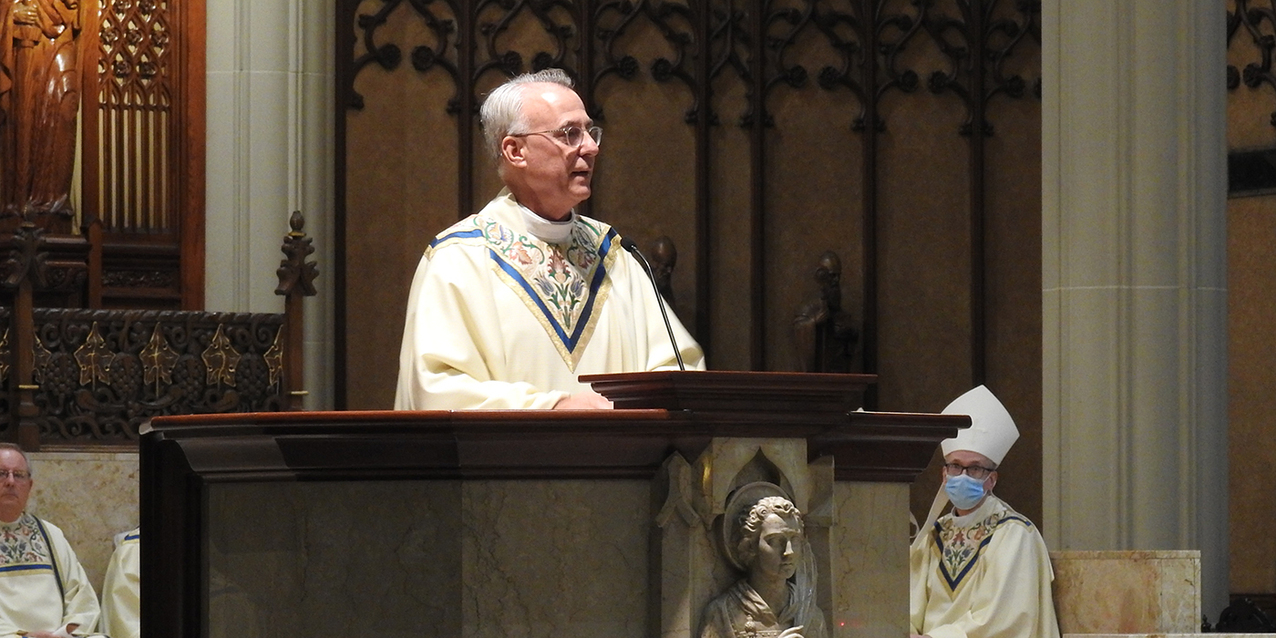 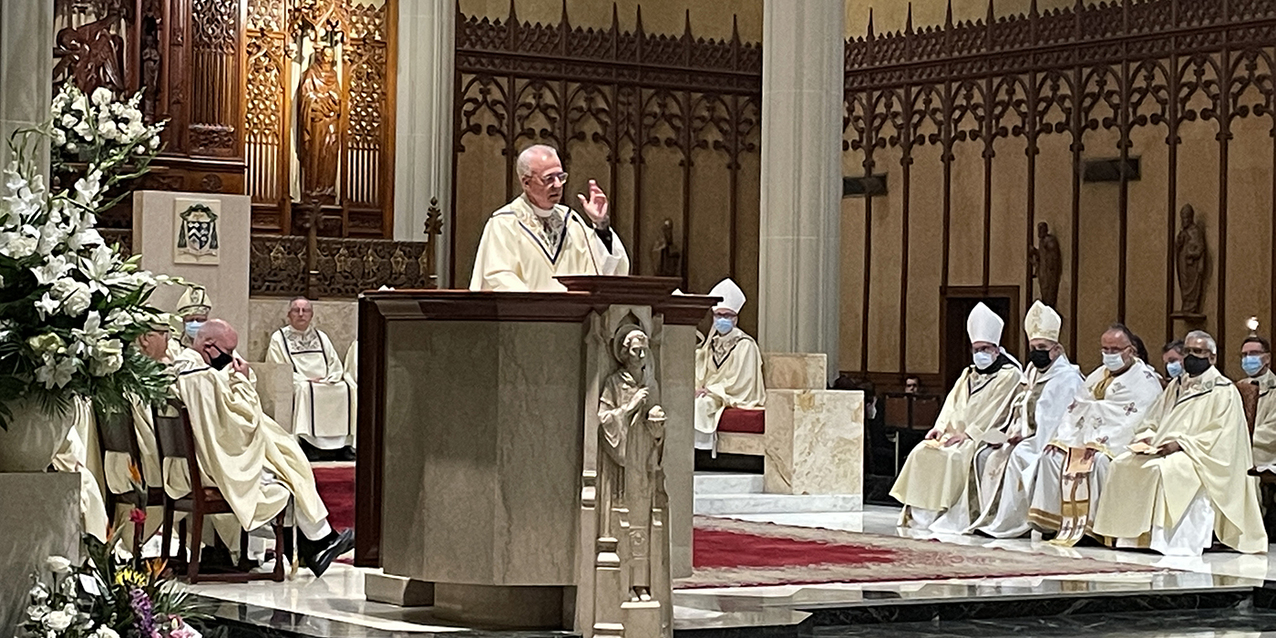 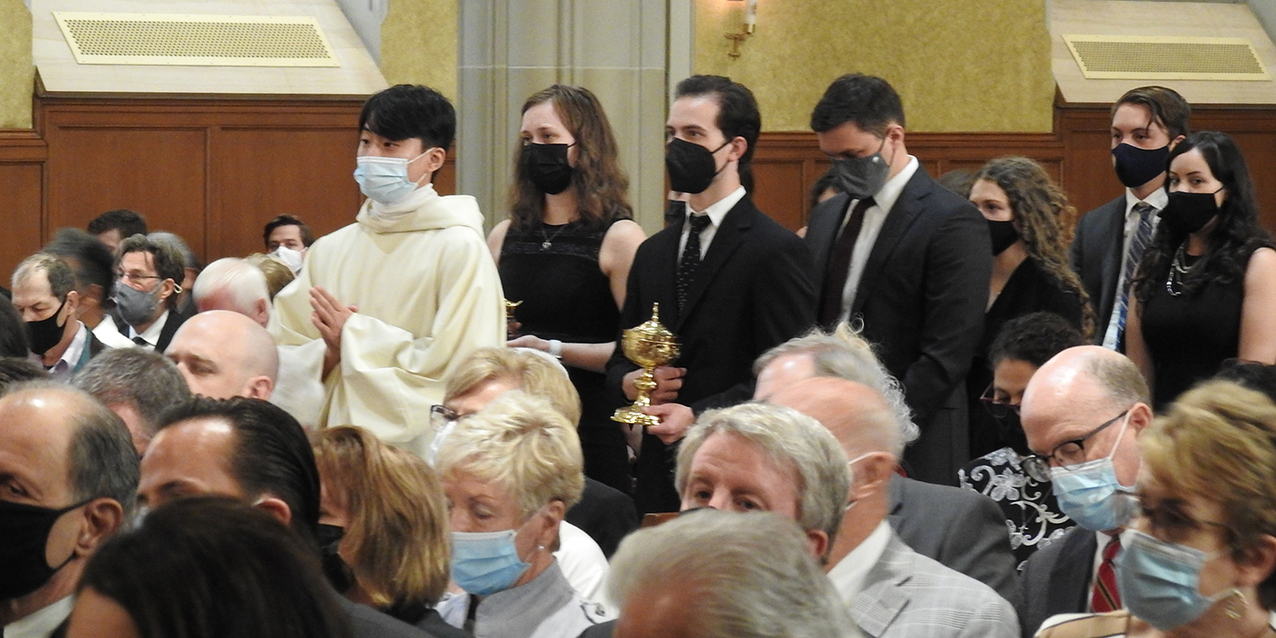 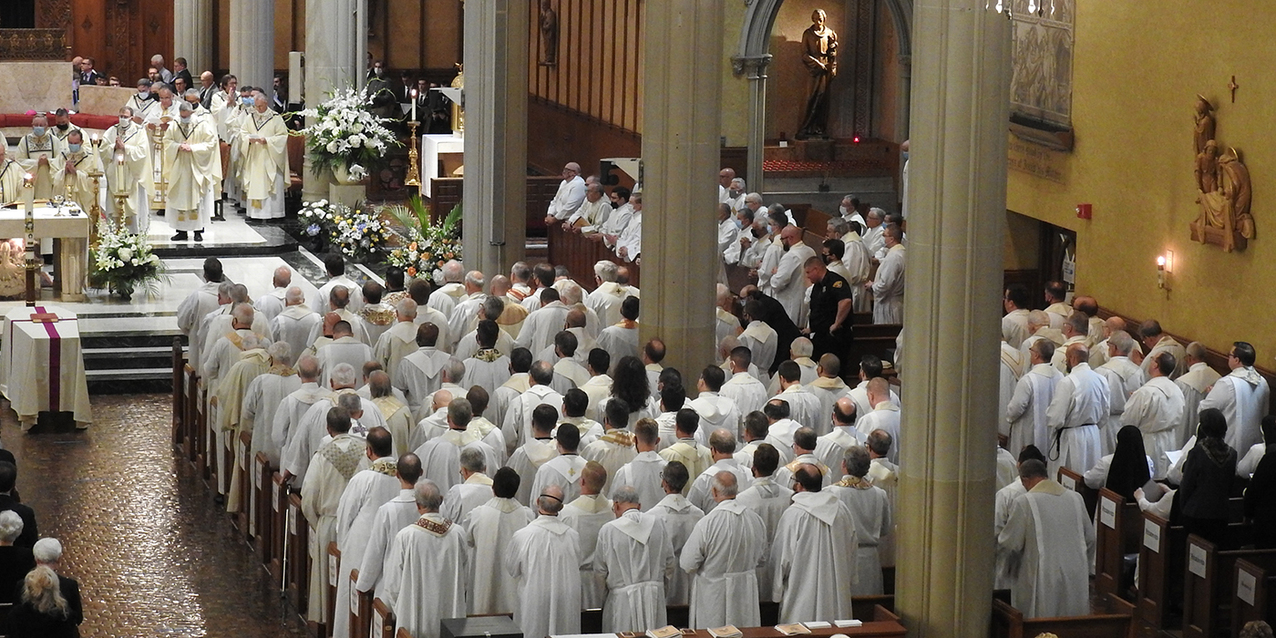 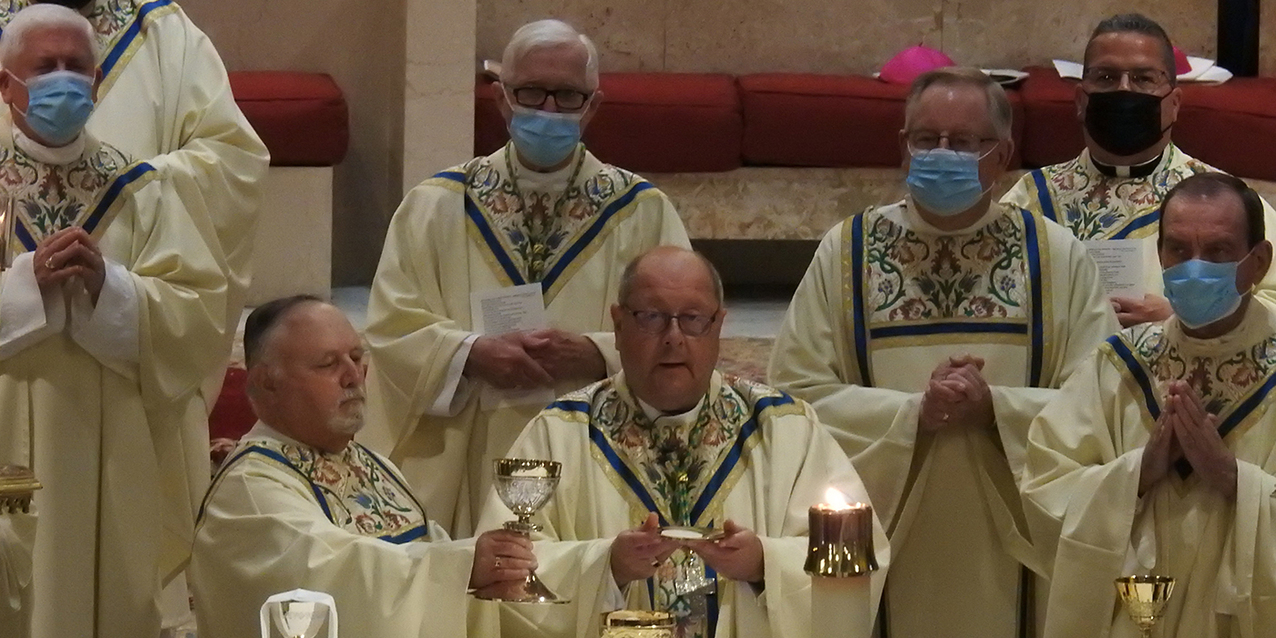 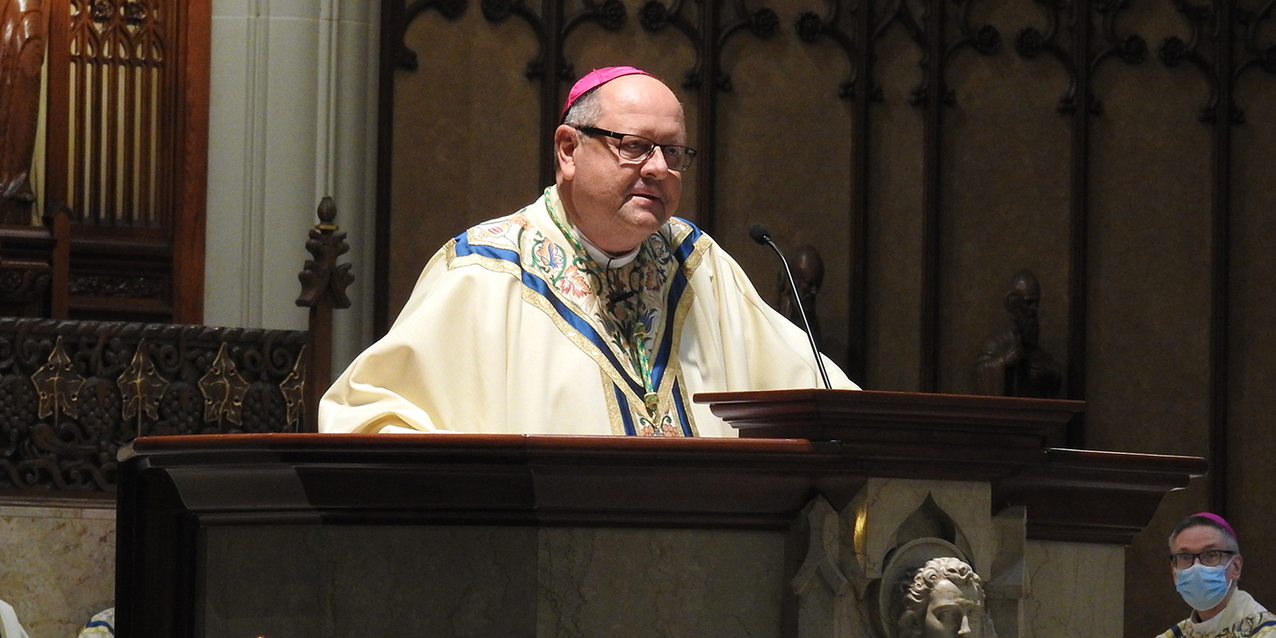 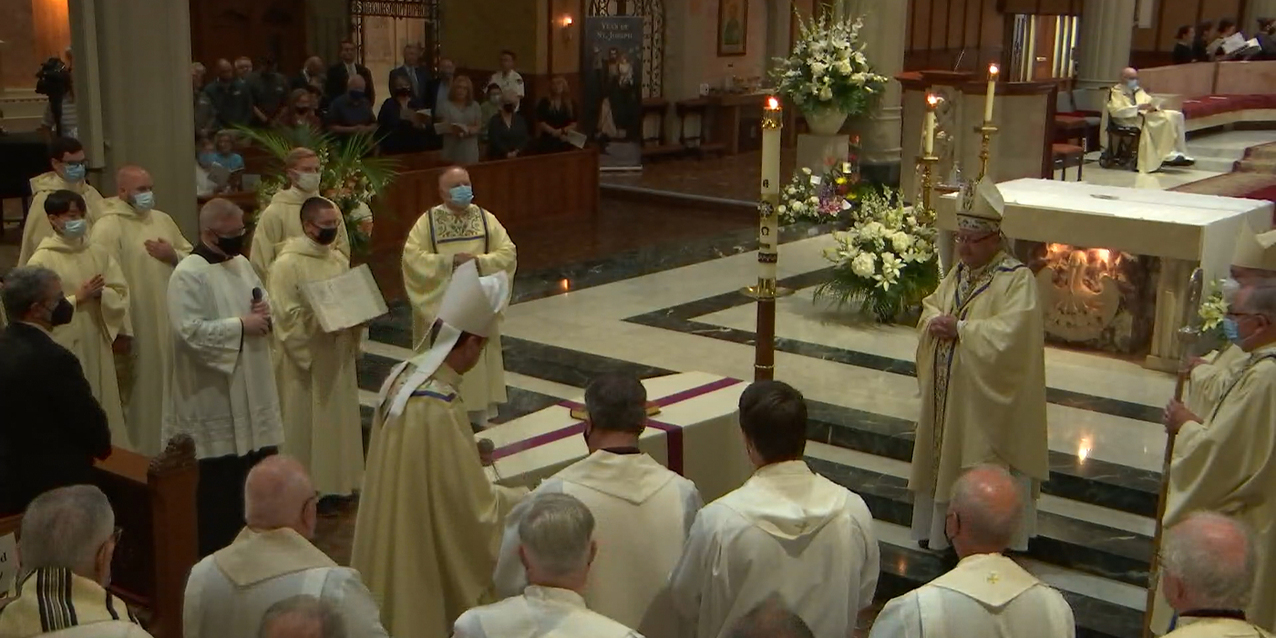 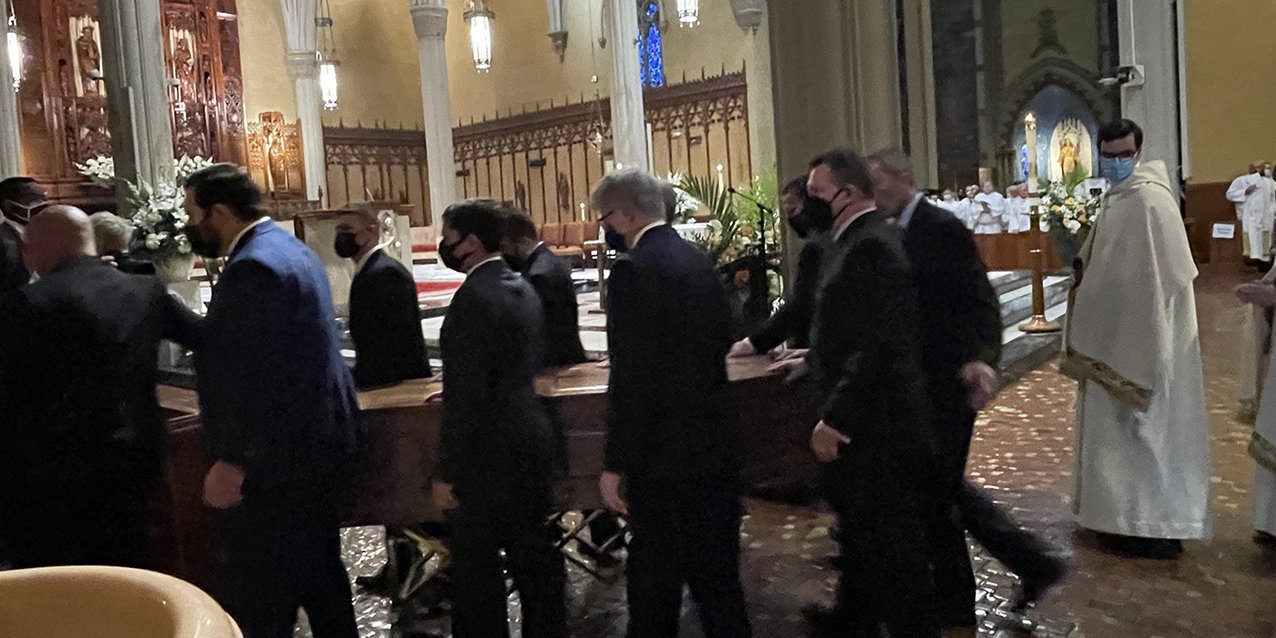 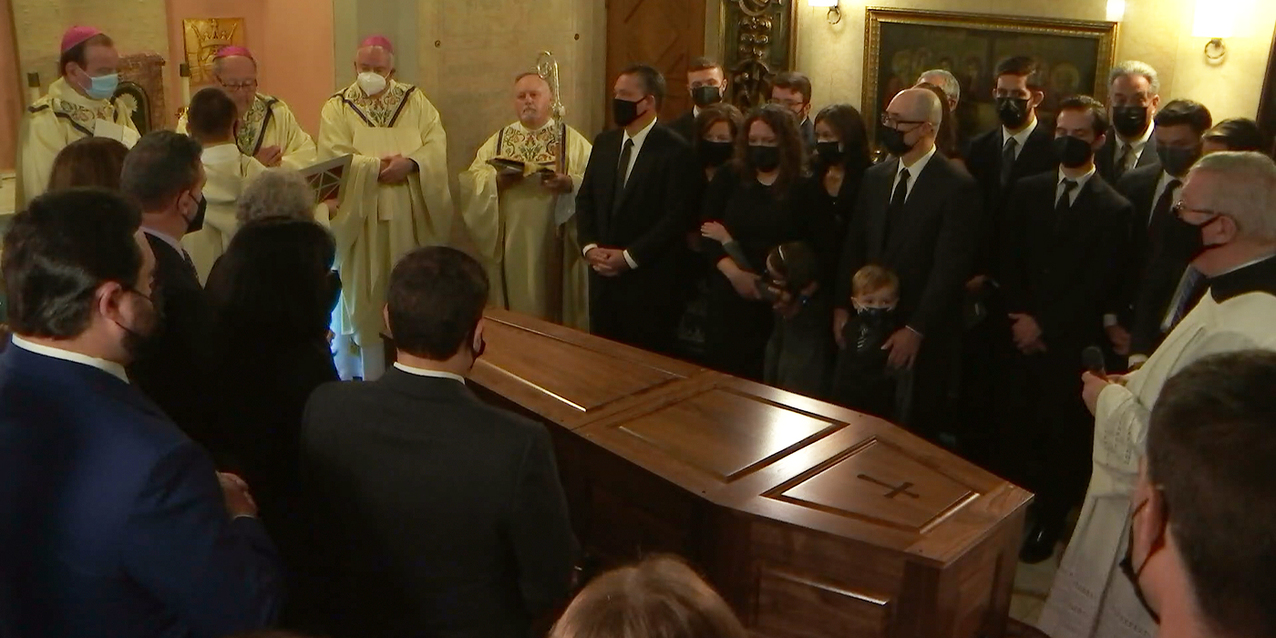 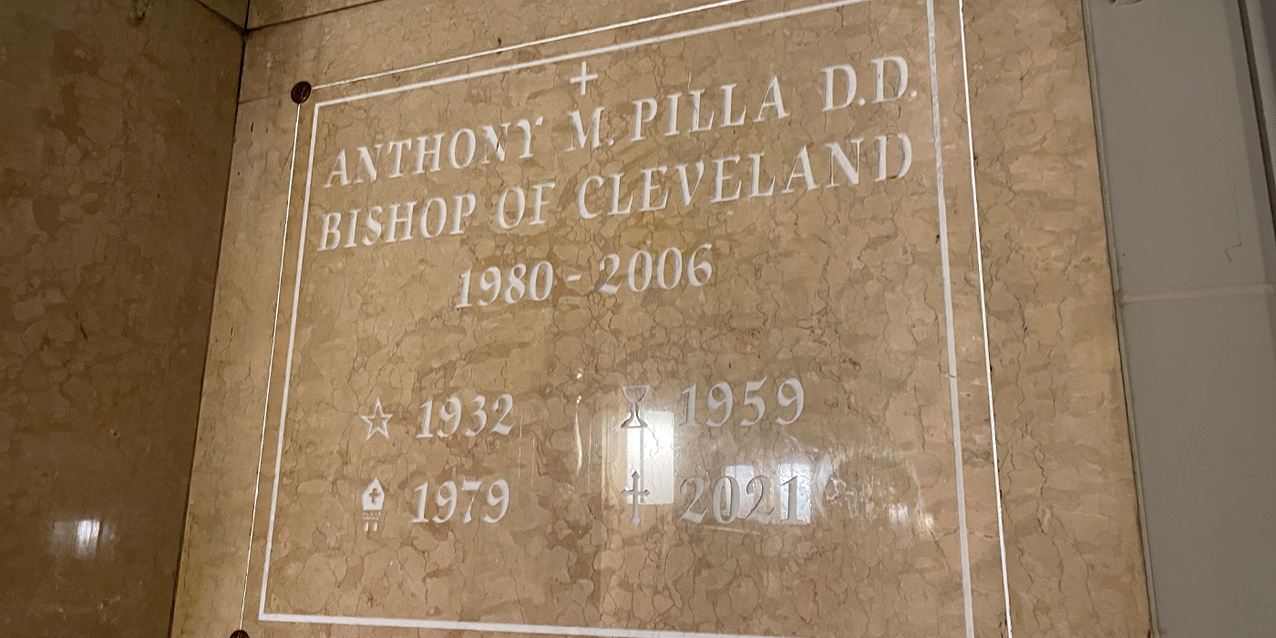 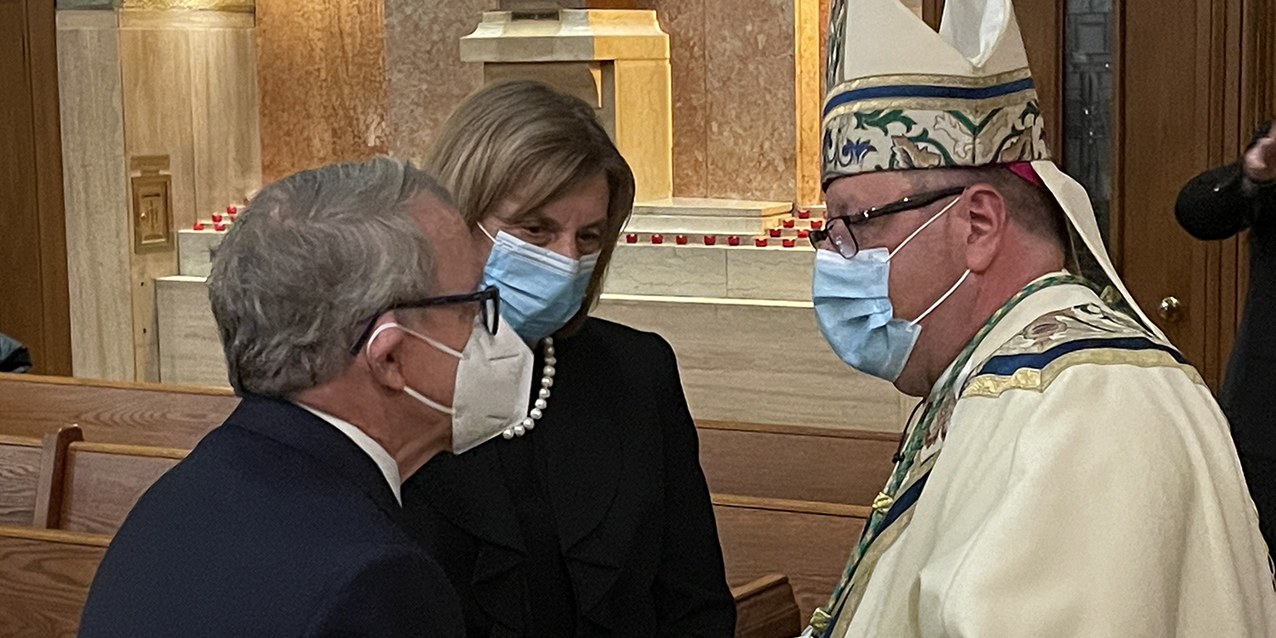 Father Edward Estok, pastor of St. Albert the Great Parish in North Royalton, admitted he was “a bit worked up” about delivering the homily at Cleveland Bishop emeritus Anthony M. Pilla’s funeral Mass.

But he remembered some advice given to him by the late bishop, whom he served for six years as priest-secretary. “Whenever I would get worked up in the office, he would tell me, ‘Ed, take a patience pill,’” Father Estok said, imitating the bishop and drawing chuckles from the congregation.

Bishop Pilla, the beloved ninth bishop of Cleveland and its first native son to serve in that role, died on Sept. 21 at age 88. On Sept. 28, hundreds of family, clergy, religious, diocesan employees and friends attended his funeral Mass in the Cathedral of St. John the Evangelist. Many others watched the livestream. Bishop Edward Malesic, the 12th bishop of Cleveland, was the principal celebrant. Bishop Pilla was interred in the cathedral’s Resurrection Chapel, the final resting place for many former Cleveland bishops.

Bishop Malesic read a message from the Holy See offering condolences on the death of Bishop Pilla. He said he was honored to use Bishop Pilla’s crosier and chalice at the Mass.

In his homily, Father Estok said Bishop Pilla called everyone family. “It was the all and real effect of his ministry for over 40 years among us and it is the commission for our journey ahead in the wake of the bishop’s passing from our midst,” he said. “As members of the Pilla family, we are charged by him, his life and ministry and now his death to ‘Live on in his love.’” which was the bishop’s motto.

He acknowledged the bishop’s beloved family – his sister-in-law, nieces, nephews, offspring and spouses – and offered sympathy as well as thanks for the care they provided to him in his final years.

When installed as the ninth bishop of Cleveland, Father Estok said Bishop Pilla introduced himself to his new Church community by saying, “I am your brother, Anthony.” Over the years, he asked us to consider a new model of bishop as our brother. “This approach to being a bishop came to him naturally,” Father Estok said, noting Bishop Pilla always said the two greatest gifts in his life were the priesthood and his parents.

Not long after his installation, Bishop Pilla told a friend that he couldn’t do “this bishop thing; it’s just not me.” The friend, Ursuline Sister Laura Bouhall, told him not to worry about being a bishop. “Just be Anthony and you’ll be fine.” And he was, Father Estok said.

Bishop Pilla chose “Live on in my Love” as his motto, Father Estok said, explaining that the translation he used for the motto was less of a command more of a commissioning. “Bishop Pilla accepted the charges and responsibilities of his new office, but he always modified his tasks and choices by this command to live his life in love.”

The late bishop was a painter and on his “personal palette of spiritual gifts (great intellect, discipline, teaching, loyalty, artistry and others) his preferred and most effective gift to employ as bishop was tender, brotherly love – the greatest gift,” Father Estok said, adding his commitment “to lead with love” first brought him to his knees in prayer. He never missed a day of celebrating the Eucharist and his prayerful devotion, especially to the Eucharist and Blessed Mother, changed him and brought him consolation and strength in difficult times.

Father Estok recalled how frightening it was on Sept. 11, 2001 after the terrorist attacks in New York City, at the Pentagon and in Shanksville, Pennsylvnia. As people fled downtown, he said Bishop Pilla wanted the two of them to celebrate Mass in the cathedral. “I knew he was convinced that his connection to the love of God in prayer was his pathway to his service to the Church in love. Like so many of you, I knew he prayed for me and it strengthened me,” he said.

Bishop Pilla’s first official act as shepherd of the diocese was to go to the airport in December 1980 with the Ursuline Sisters to welcome home the bodies of Sister Dorothy Kazel and lay missionary Jean Donovan, who had been murdered in El Salvador. “He extended the humble, tender love just where it was needed. That sadness met by love made all the difference.”

In fact, his leading by love prompted the Rev. Ken Chalker, a Methodist pastor, to declare Bishop Pilla “a bishop for us all,” Father Estok said. Another person said, “Bishop Pilla was Pope Francis before there was a Pope Francis.” He led by loving and it changed hearts. “It changed our notion of a bishop. It changed the Church for us who witnessed it and we with him changed the world around us,” Father Estok said.

He also recalled a woman from the Hispanic community who said the bishop loved everyone in such a way that “we suspected the blood running through his veins wasn’t only Italian, but he had multi-colored blood belonging to every group in the city … He had a heart of love for immigrant people, old and new.”

Father Estok said Bishop Pilla’s plan to “live on in my love” manifested itself in new structures and strategies in the Church over the years. He insisted “togetherness or collaboration must be the foundation of our mission and the basis of our hope.” He would say the primary goal of ministry cannot be to win an argument or to get your own way. It has to be to win the friendship of those we must accompany, which can be a challenge. “He loved the process that slowed things down so that everyone affected by a decision could catch up and hopefully, jump on board.”

He listed some of the bishop’s accomplishments, including:

In reflecting on Bishop Pilla’s life and ministry, Father Estok said his longtime assistant, Eileen Von Alt, often talked about the privilege of walking alongside “dear bishop,” as she called him, as like sharing in a Camelot experience. Rev. Chalker looked back on his years of working with the bishop, calling it “a unique time of grace.” Since his death, Father Estok said it’s like the end of an era.

As he thought about the end of the story, “I was reminded of these words of dear bishop at his retirement, ‘When we have walked this path of love faithfully, our boast will be nothing more than that; we have done our part – we have borne the light of hope for another leg of the journey. The most important judgment of us will be the measure to which our descendants follow where we have trod.’”

Father Estok said he thinks the bishop is talking to us. “Can we hear him? Will we listen? Can we be the living signs of his faithful service by walking forth from this place as the Bishop Pilla family and live on in his love?”

When he arrived in the diocese a year ago, Bishop Malesic said he asked Bishop Pilla for some advice on how to lead his new flock. “His advice was just be kind to the people.”

Bishop Malesic said the last time he saw Bishop Pilla was at the feast of the Assumption in the Little Italy neighborhood. He celebrated Mass in Holy Rosary Church with Bishop Pilla in attendance, and then Bishop Pilla celebrated noon Mass. The traditional procession followed, but Bishop Malesic said he thought it might be too strenuous for Bishop Pilla. However, he noticed him walking through the crowd after Mass. “He was in his element, with his people and enjoying every minute of it. He was, as the pope says, getting the smell of the sheep,” the bishop quipped.

He also recalled how much Bishop Pilla enjoyed spending time with seminarians. In fact, a vide was made a few weeks ago when he addressed them, telling them he’d been a priest for 62 years and he wouldn’t want to do anything else.

“How many professions can you get into where you get up every morning and you can make a difference?” Bishop Pilla said to the seminarians.

Bishop Malesic said he and Father Schlegel were driving to an appointment not far from the bishop’s residence when they learned of his death, so they drove to his home and prayed over his body. “He looked so peaceful,” the bishop said. “He was wearing a T-shirt with Mary holding a young Jesus. It seemed so appropriate.”

He said that faith gives us peace today as we mourn the bishop’s passing. “Death doesn’t have the last say for people of faith. God gives us life in abundance. That is why we can both mourn and celebrate at the same time.”

When Bishop Malesic asked clergy members who were ordained by Bishop Pilla to stand, at least half of the clergy in the congregation stood. “He loved you all and I’m coming to know you as good priests.”

The bishop offered thanks to those who planned the liturgy and the civic and religious dignitaries who attended, including Gov. Mike DeWine and his wife Fran, and he extended sympathy to all for their loss, including the late bishop’s family and Von Alt.

“His loss will leave a hole in your lives, but he continues to do what priests do – pray for you,” Bishop Malesic said.

Bishop Pilla asked that his funeral be simple. “I’m sorry, bishop, but you made that impossible,” Bishop Malesic quipped. “May you rest in peace and may the Savior say, ‘Well done, good and faithful servant. Enter into your eternal rest.’”

The diocesan archives prepared a digital exhibit in thanksgiving for the life and ministry of Bishop Pilla. Click here to view it.

More information about Bishop Pilla, including a video tribute, is available here.