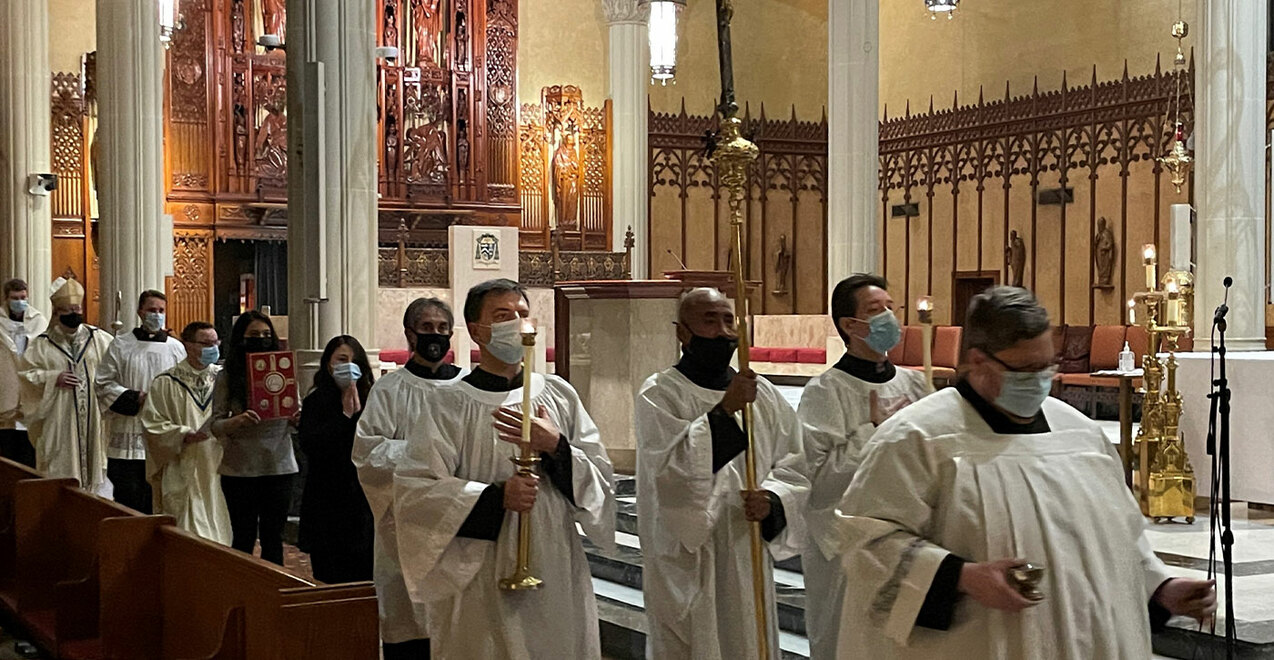 Dozens of young adults joined others in the congregation for 5:30 p.m. Mass on Nov. 21, the solemnity of Christ the King, also known as Jesus Christ, King of the Universe, at the Cathedral of St. John the Evangelist. Bishop Edward Malesic was the celebrant, with Father Damian Ference, vicar for evangelization, as concelebrant. 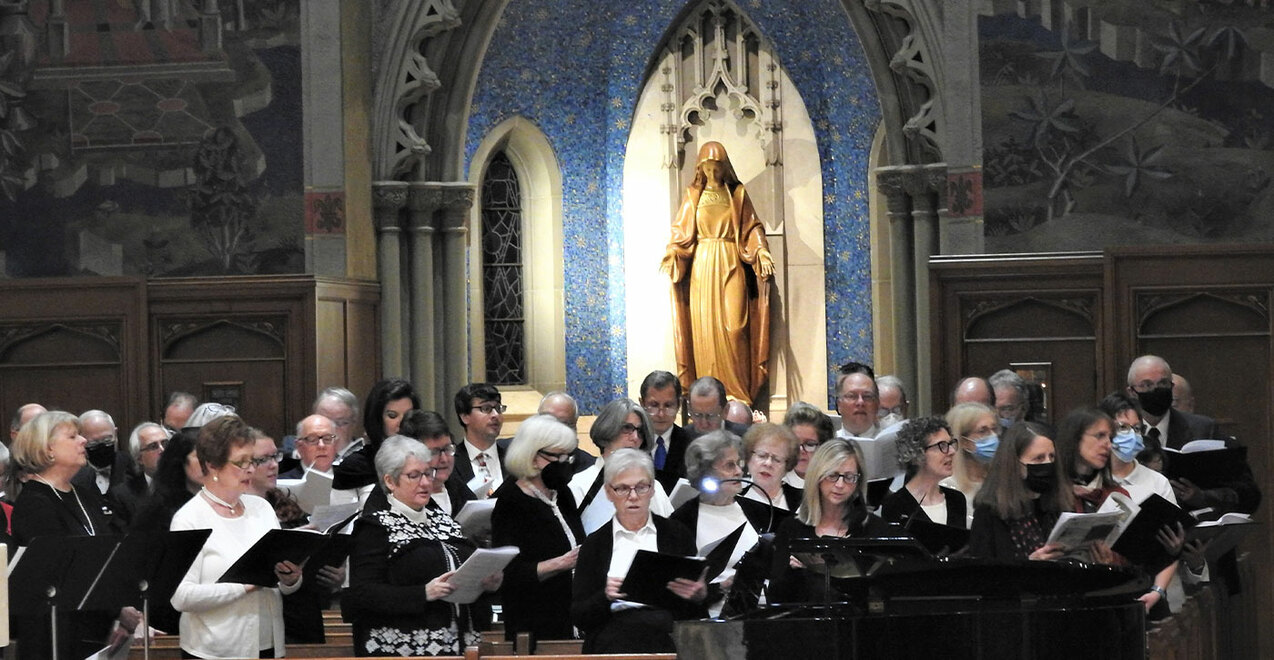 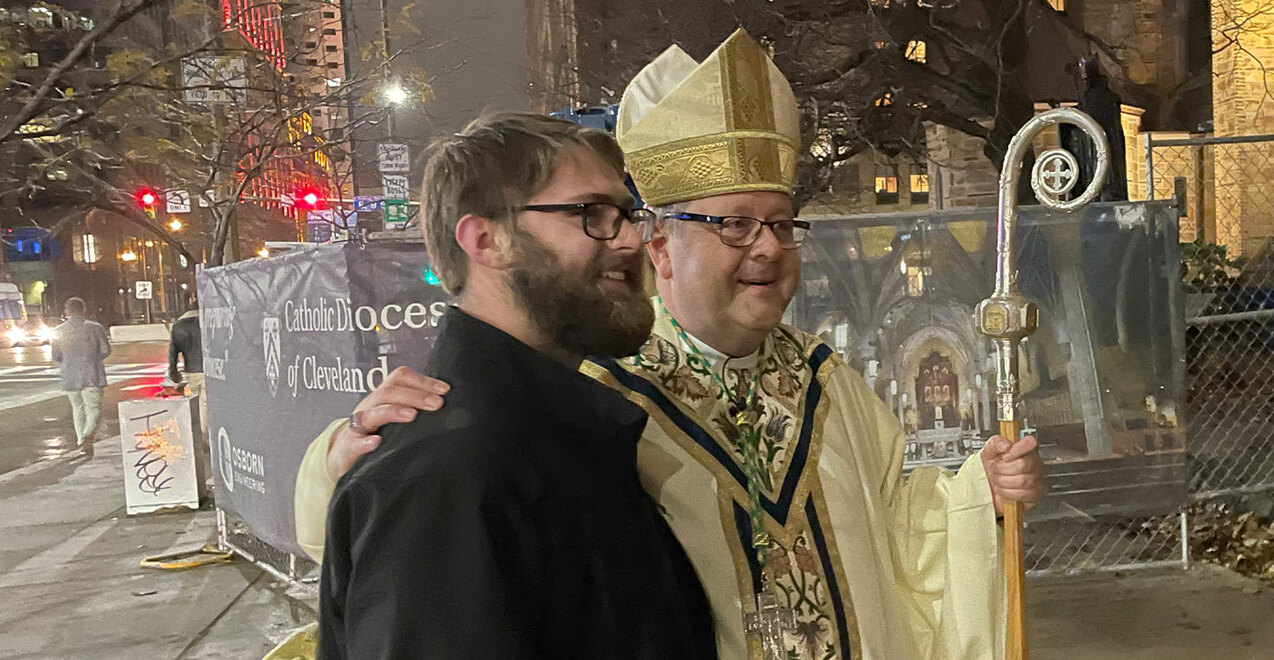 The bishop, who returned from the United States Conference of Catholic Bishops’ fall meetings in Baltimore, Maryland, and the National Catholic Youth Conferencein Indianapolis, Indiana, that afternoon, said he hopes the young adult Mass will become an annual event. It marked World Youth Day, which had been celebrated on Palm Sunday until this year, when Pope Francis moved it to the solemnity of Christ the King. The liturgy was organized by the diocesan Young Adult Ministry office, headed by Mike Hayes.

It also was the vigil of the feast of St. Cecelia, patron saint of musicians, the bishop noted. As a musician himself, he said the feast is special to him. 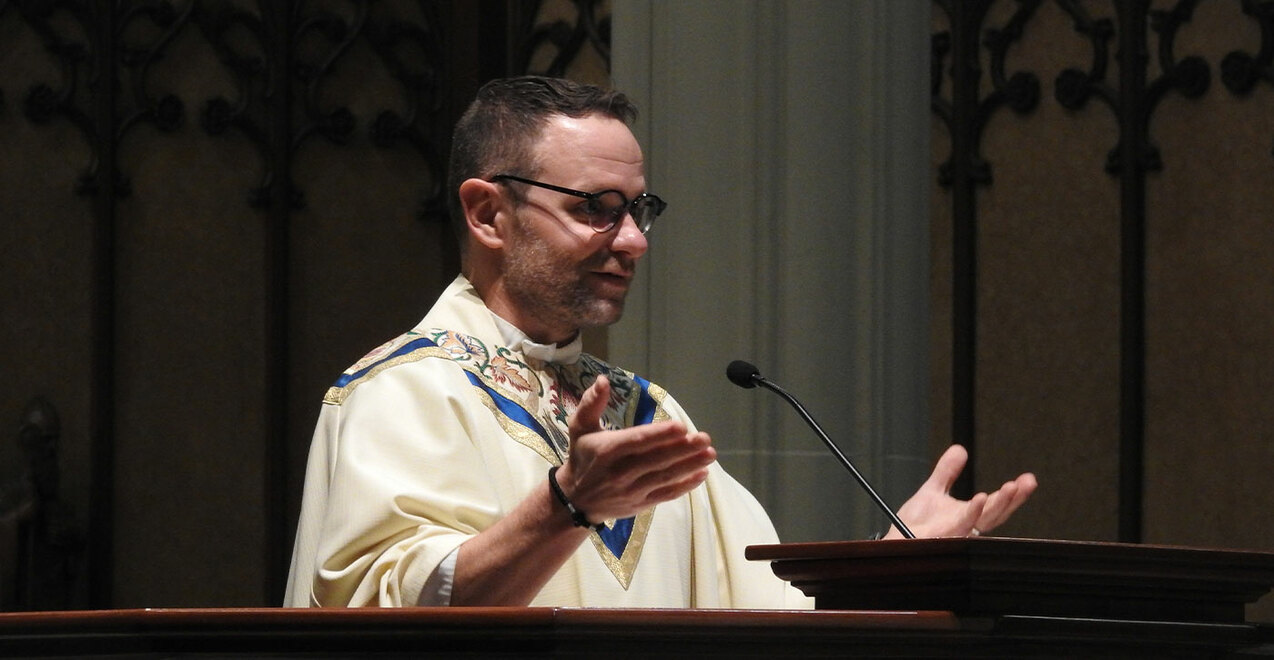 Father Ference was the homilist and spoke about the origin of the solemnity of Christ the King, which he said is a fairly new feast, instituted in 1925 by Pope Pius XI.

Jesus Christ, king of the universe, was born into poverty, he said. He lived a humble life, but was a great teacher, showing his disciples the kind of king he was by washing their feet at the Last Supper, where he instituted the priesthood and the Eucharist.

“What does our king look like?” Father Ference asked, pointing to a large crucifix hanging in the cathedral. “His crown was not rubies and diamonds, but thorns. There is our king.”

We often are pulled away from God, but there is a way back: through his Son, Jesus, king of the universe, he added. 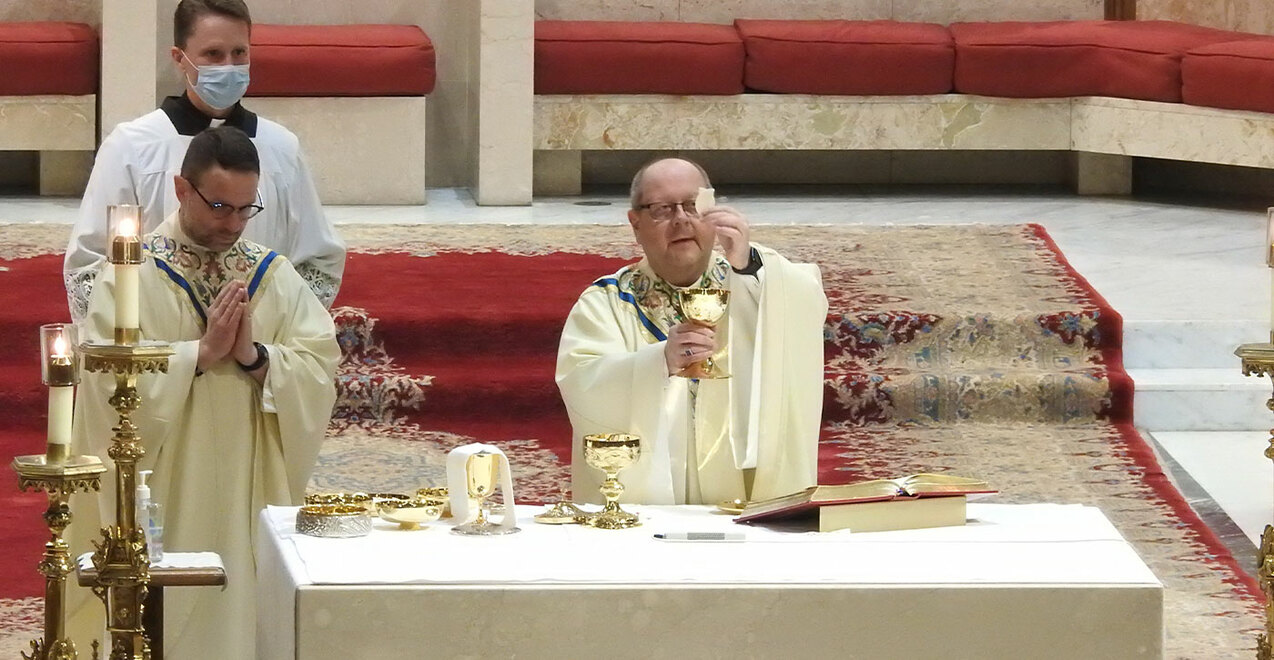 During Mass, the priest says, “It is right and just,” which is why we need to worship God and to give him thanks for all he has done for us. “He wants to make us new, to redeem us by his sacrifice.”

God’s kingdom is eternal and universal, Father Ference said. “All are invited to this kingdom of truth and life,” a place of grace, justice, love and peace. “That’s what the Lord wants to do for us.” The Lord should live in our hearts, but sometimes worldly influences and sin may push him out, so we go to confession, he forgives us and there is room for him once again, Father Ference explained. 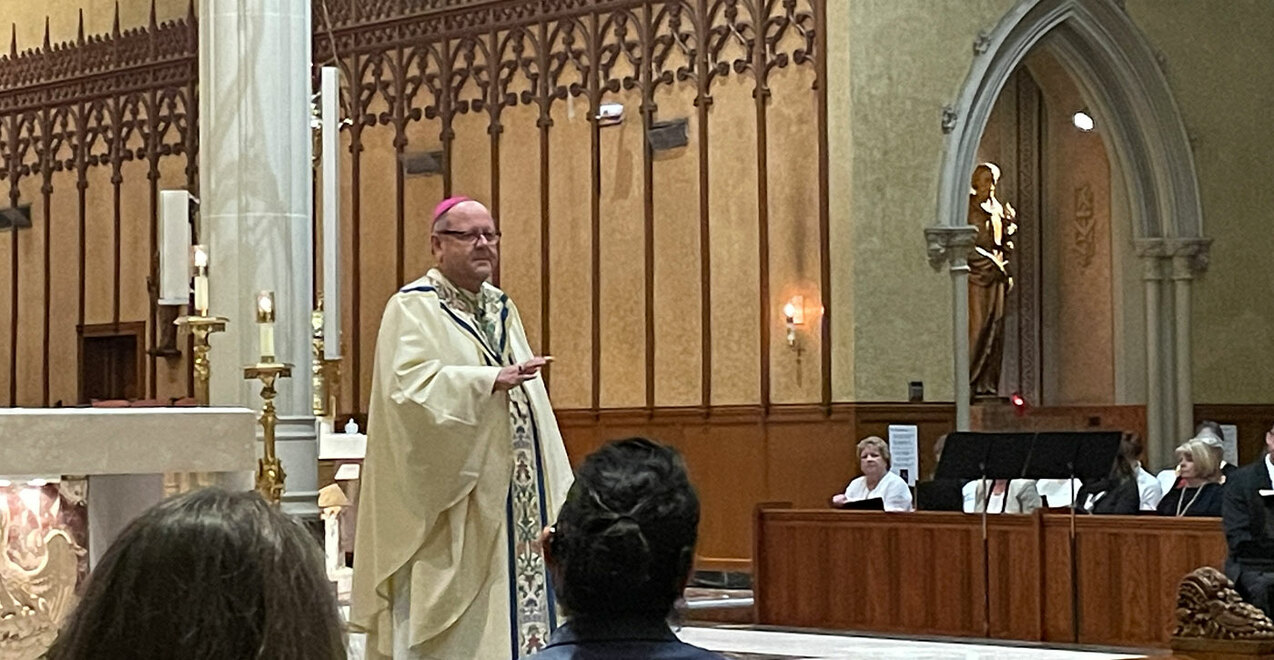 “He wants to sanctify us and to make us who we should be. Then, at the end of Mass, we’re sent as missionary disciples to find others who don’t know him. As young people, you are sent to bring Jesus to the world in a way no one but you or me can do,” he said.

He also shared details of St. Cecelia’s life, noting that she was born to a wealthy family and was to be married; however, she wanted the Lord to be her only partner. She was sentenced to die in a steam chamber, where she began singing – but didn’t die. She released, struck with a sword and injured seriously. No one was permitted to help her as she lay dying on the street for two or three days, Father Damian said. Yet, she evangelized, even while dying, by using her fingers to indicate three in one for the Trinity.

“Jesus loves us. He is alive and he wants to make us like himself. Jesus is indeed Lord,” Father Ference said.

After Mass, Bishop Malesic shared some of his NCYC experiences, noting it was his second time attending. 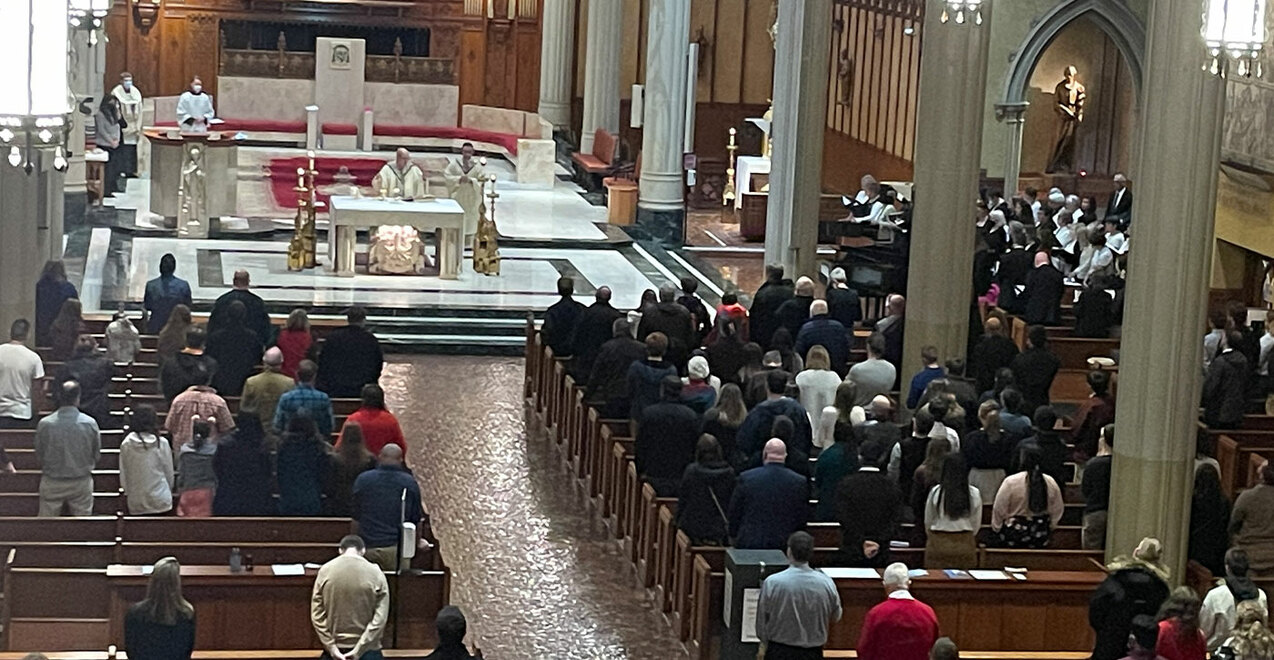 “Young people are thirsting for Christ,” he said. However, they feel they can’t speak publicly of their faith “or they’ll be ‘canceled.’ But they could do it freely in Indianapolis,” he added.

“The Church isn’t perfect, but it’s where Jesus wants us to be. And 11,000 young people were being drawn to Jesus, he said, adding they are being called to be saints. He recalled the second night of the conference when it was time for Eucharistic adoration and the servers brought in the incense. “They could smell it and they knew Jesus was there. They had been shouting and talking, but suddenly they fell to their knees and were quiet, knowing they were in the presence of their Lord and king. I don’t know what else could get 11,000 young people to be quiet like that – except Jesus,” he added.

The bishop said he almost wished he could be a teenager again and relish “the simple joy of being in the presence of the Lord.” 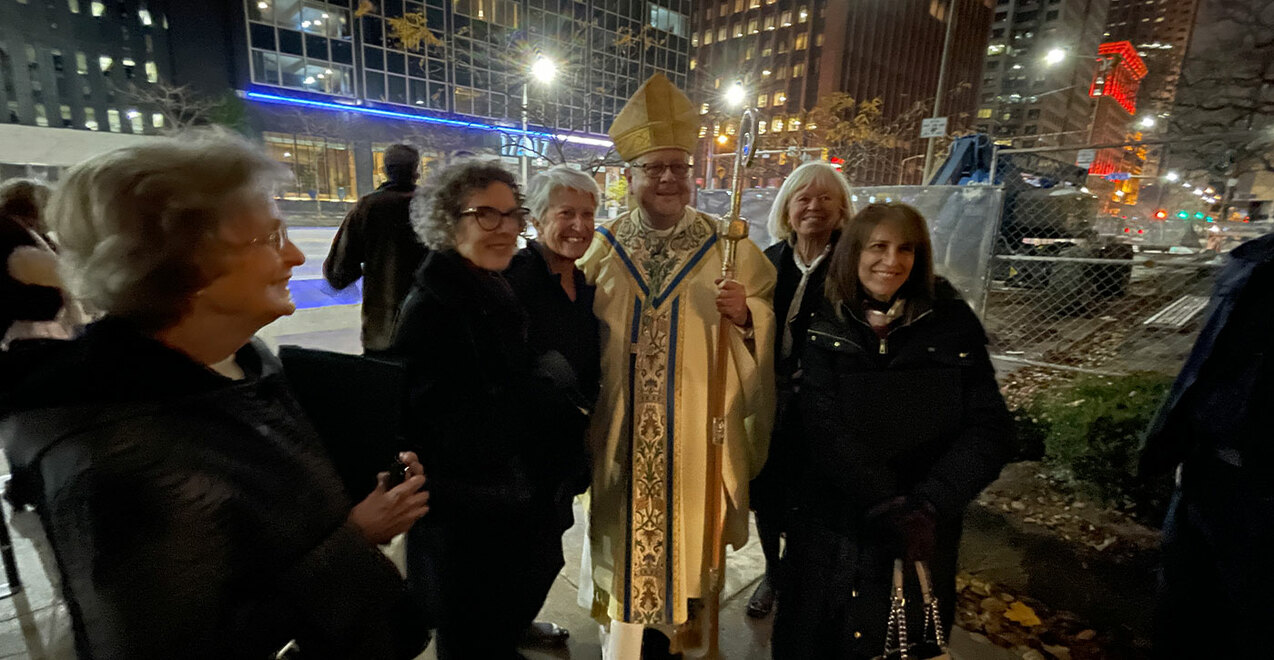 He reminded the congregation that faith is a personal thing, but it must never be private.

“We live in a world that needs truth, joy and light. This world needs a king and we must proclaim that. You need a king and I know who he is: Jesus,” he said, telling the group they should tell others, “Come and see what I found.”

Jesus is the one who will save the Church, Bishop Malesic said. “We have to tell our story. Jesus Christ call us as sinners and redeems us.” That sacrifice takes place during each Mass, which is why the bishop said the most joyous celebrations he has ever been to are the celebration of holy Mass.

“This is where life happens, where we come to be fed so we can feed others.”

Father Ference invited the group to travel to nearby St. Peter Church, where about 80 people enjoyed refreshments, social time and evening prayer.