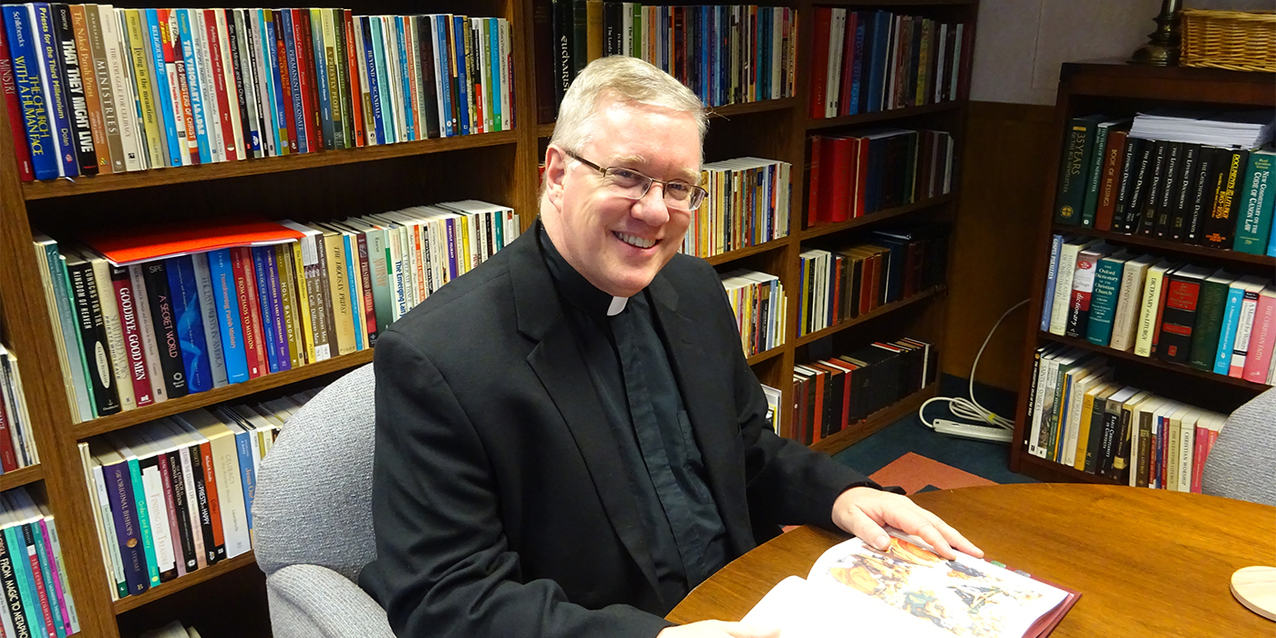 For more than three decades, the Woost family has made a mark in parishes, schools and the formation of priests in the Catholic Diocese of Cleveland. Three of the seven brothers are priests: Father Mike, Father Dave and Father Tom. Another brother, Jon, is completing his aspirant year in the permanent diaconate program.

Their impact in the diocese ratcheted up a notch on May 9, with the announcement that Pope Francis had appointed Father Mike Woost, 63 and the second-oldest son, as auxiliary bishop of the diocese.

Bishop-elect Woost said May 1 was a typical Sunday. He had just celebrated Mass at St. Mark Parish in Cleveland’s West Park neighborhood -- where he helps on weekends – and returned to the seminary, where he lives.

“I answered the phone and the caller said, ‘Father Woost, this is the apostolic nuncio, Archbishop (Christophe) Pierre. How are you?’ I said fine, and told him I had just celebrated Mass and returned to the seminary.”

Then came the two key questions: “Are you alone? Can you talk?” the nuncio asked.

“He said the Holy Father had appointed me the auxiliary bishop of Cleveland. I was stunned,” Bishop-elect Woost said, recalling the conversation. “I didn’t know what to say.”

They had a pleasant discussion and he asked if Bishop Edward Malesic knew about the appointment. Archbishop Pierre said he was aware, but that the bishop-elect should call him, which he did right away.

“Bishop Malesic took me out to dinner that night and we had a nice conversation,” he said. “He was very gracious. He has been such a blessing to our diocese.” Part of the discussion focused on how his role would change in his new position as bishop-elect.

“This announcement is great news for the Diocese of Cleveland,” Bishop Malesic said. “I am grateful to the Holy Father Pope Francis for the appointment of Bishop-elect Woost as an auxiliary bishop. He is a highly respected, capable and faithful man who will be a good helpmate with me in shepherding the wonderful people of our diocese. I look forward to working closely with Bishop-elect Woost and ask our people to pray for him as he prepares to be ordained as a bishop of our Church.”

Youngstown Bishop David Bonnar said this about the appointment: “The Diocese of Youngstown rejoices in the good news that our Holy Father, Pope Francis, has tapped Father Michael Woost, a priest of the Diocese of Cleveland, to become an auxiliary bishop and work alongside Bishop Malesic. For many years, Father Woost has been a formator for our men in priestly formation who have attended Saint Mary Seminary in Cleveland. Bishop-elect Woost’s love for the priesthood and sacred liturgy are a gift to the Church. It gives me great joy to congratulate and welcome him to the fraternity of bishops.”

“Last week was a very long week because I couldn’t tell anyone,” Bishop-elect Woost said, explaining that the appointment remains confidential until it is announced officially through Vatican channels. That happened at 6 a.m. May 9.

However, he did tell his immediate family the night of May 8 to ensure they knew before the news became public. “They’re pretty excited,” he said.

“Ever since the announcement, I’ve been getting texts and messages of congratulations. They’ve all been very positive. It’s so gratifying,” the bishop-elect said. “I’m very grateful to God and humbled and grateful to the Holy Father for the appointment,” he added.

One of the first things he had to do was choose a date for his episcopal ordination. His first choice was Aug. 4, the feast of St. John Vianney, patron saint of parish priests. “It just seemed appropriate,” the bishop-elect said, noting his many years of work at the seminary where he helps with priestly formation.

The nuncio, Bishop Malesic and Cincinnati Archbishop Dennis Schnurr, all of whom will have roles in the ordination, agreed on the date. Bishop-elect Woost said he plans to ask Auxiliary Bishop emeritus Roger Gries and Bishop Martin Amos, retired bishop of Davenport, Iowa and a son of the diocese, to be his co-consecrators.

In addition to his duties on the seminary faculty, Bishop-elect Woost sometimes serves as a master of ceremonies at official liturgies for Bishop Malesic. Recently, the bishop also appointed him interim director of the diocesan Office of Worship. One of his responsibilities will be to prepare a detailed liturgy plan for his episcopal ordination. “And as interim director of the office, I have to approve it, also,” he noted.

During the coming weeks, he will select an episcopal motto and obtain a coat of arms. The bishop-elect said he and Bishop Malesic have talked about the many things he has to do before his ordination.

After he takes on his new role, Bishop-elect Woost said he likely would continue to live at the seminary and maintain an office there. He said the bishop is open to him possibly continuing to teach a class at the seminary. In addition, he will oversee the Office of Worship until Bishop Malesic decides how to proceed with that position.

When asked how his priest brothers took the news of his appointment, he said they’re excited and happy for him. “They keep me grounded,” he added.

Father Dave Woost, the fourth of the brothers, was ordained in 1991 and has been pastor of Divine Word Parish in Kirtland since 2004.

Father Tom Woost, the youngest, was ordained in 1997 and has been pastor of St. Brendan Parish in North Olmsted since 2008. In January, he was appointed administrator of St. Richard Parish, also in North Olmsted.

Jon Woost, the fifth of the seven sons, is discerning ministry in the permanent diaconate. “Jon and his wife Carrie have really enjoyed the classes during his aspirant year,” the bishop-elect said.

The three priest brothers, who were featured as the cover story for the May/June 2020 issue of Northeast Ohio Catholic magazine, said faith is the centerpiece of their family. They prayed regularly, before and after meals, and attended Mass together, Bishop-elect Woost said. “Our parents wanted us to be happy. They wanted us to choose what made us happy,” he said. And for three of them, that was the priesthood.

The bishop-elect graduated from Saint Ignatius High School in 1976 before enrolling in Borromeo Seminary, followed by Saint Mary Seminary and Graduate School of Theology. After his priestly ordination on June 9, 1984, he served as parochial vicar at Immaculate Conception Parish in Madison 1984-1989. He was diocesan vocations co-director 1989-1995 and then pursued advanced studies in liturgy at The Catholic University of America, earning a licentiate in sacred theology in 2000. He has been a faculty member at Saint Mary Seminary and Graduate School of Theology for the past 22 years and became interim director of the Office of Worship earlier this year. He also serves as dean of students, formation advisor, chair of the Department of Liturgical and Sacramental Theology, director of liturgy and master of ceremonies at the seminary. Previously, he was formation advisor for Borromeo Seminary. Bishop-elect Woost also serves on several committees at the seminary, has written extensively and conducted numerous retreats, parish missions, formation and sacramental programs.

Regarding his new role, Bishop-elect Woost said he is eager to work with Bishop Malesic and the priests of the diocese as they minister to the faithful. “I am also looking forward to his (Bishop Malesic’s) wisdom and guidance,” he said.

The ministry of a bishop is unique, the bishop-elect said, explaining that it is a sacramental sign. Bishops belong to the universal Church community, the body of Christ, and they unite people to Christ as they proclaim the message of the Gospel.

“I hope my ministry does that. I want it to be a ministry of communion. I am excited and looking forward to it,” he added.