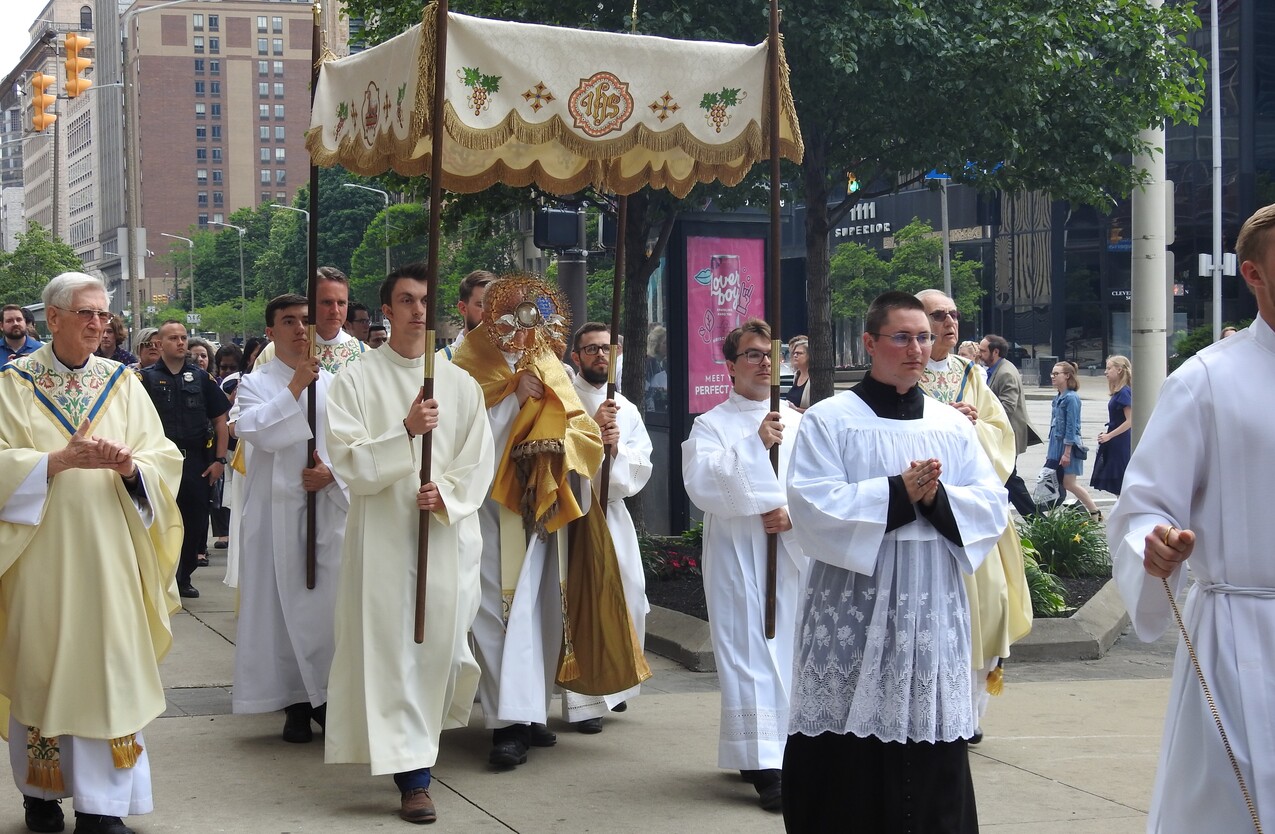 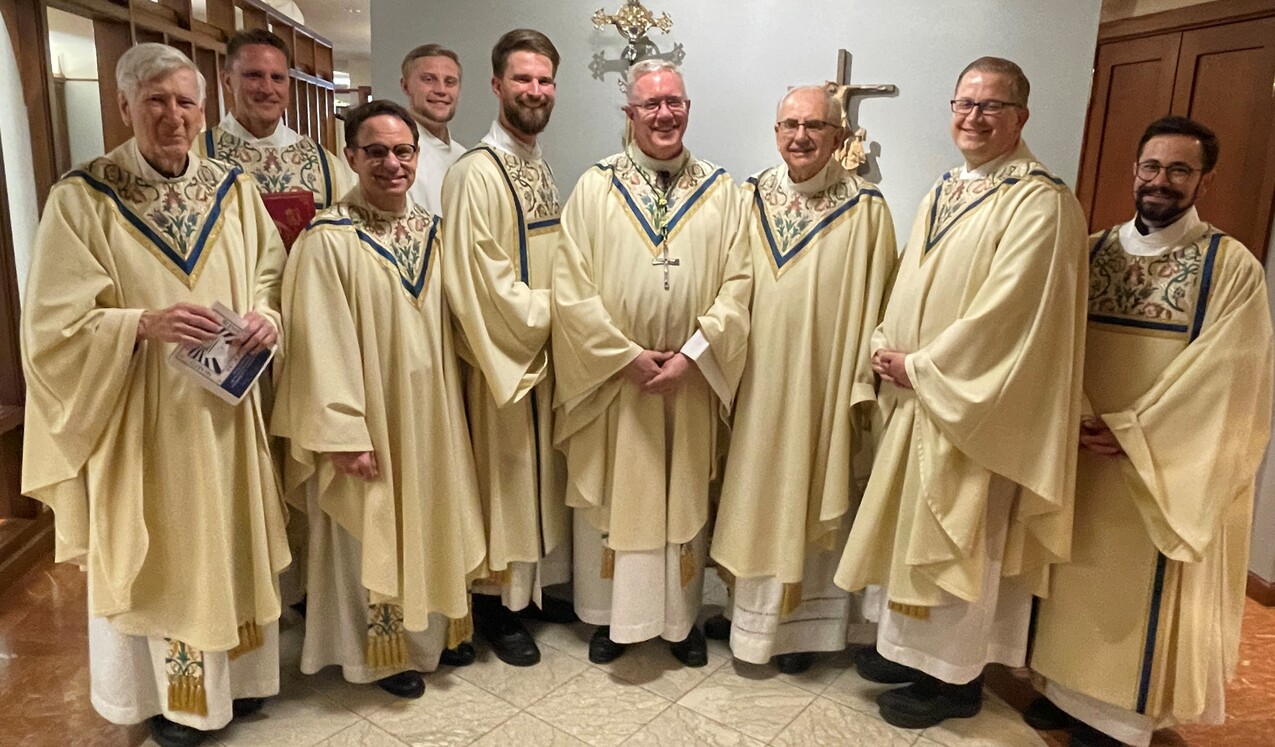 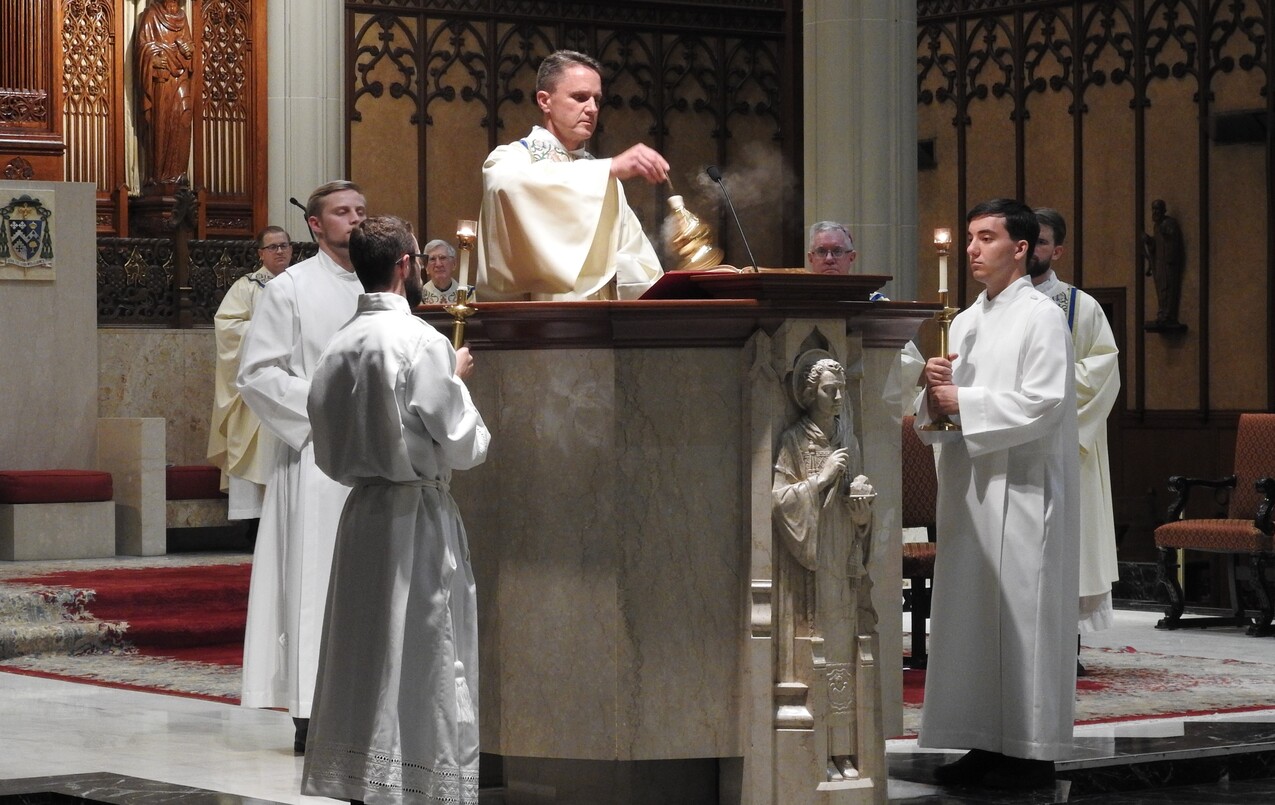 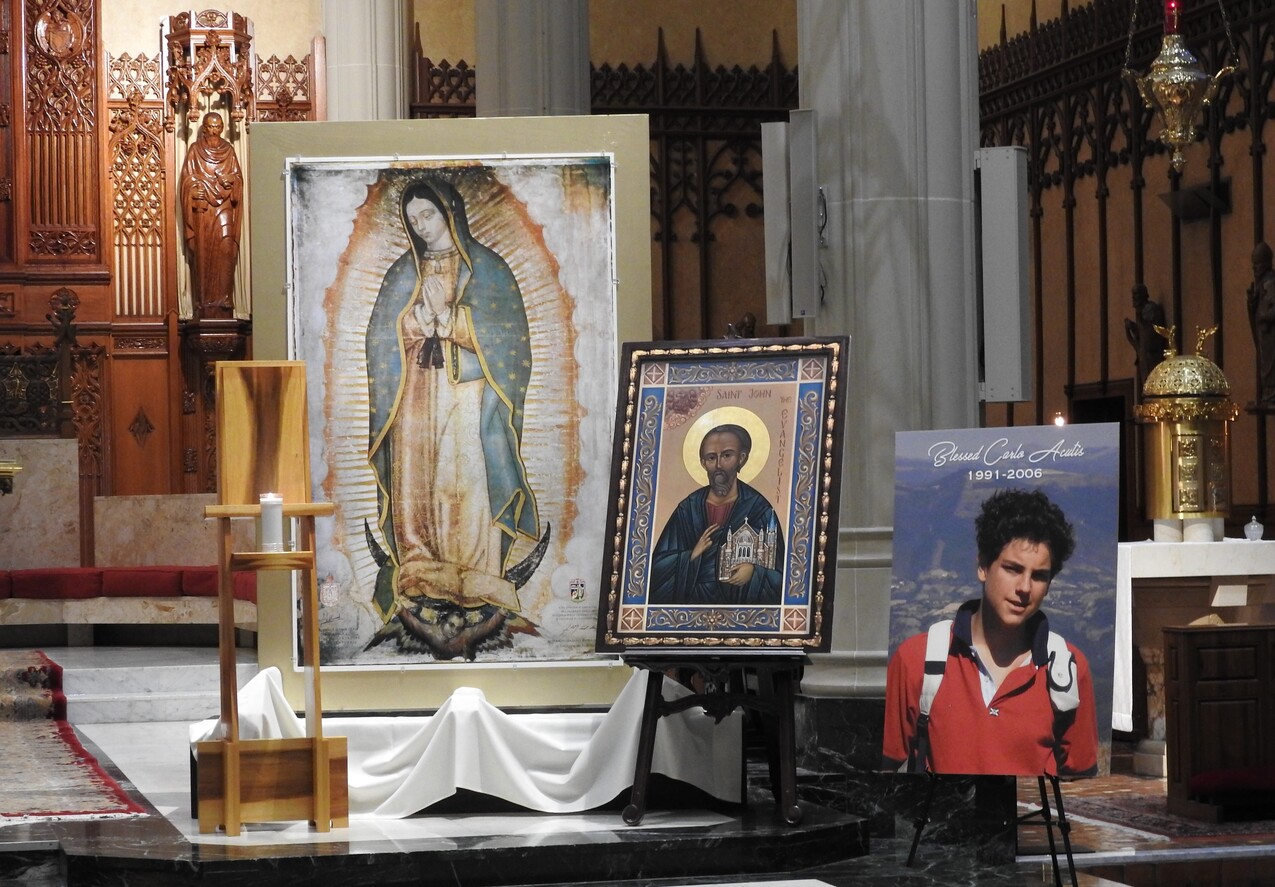 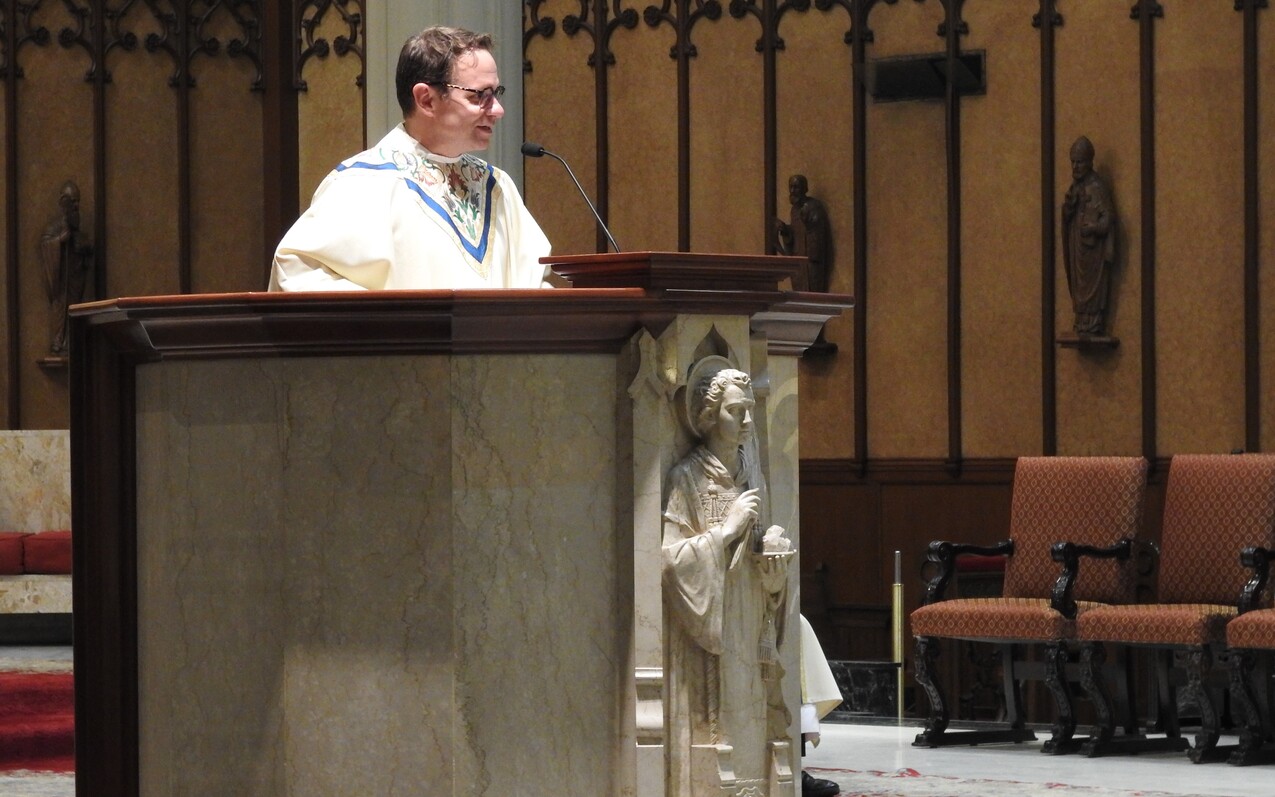 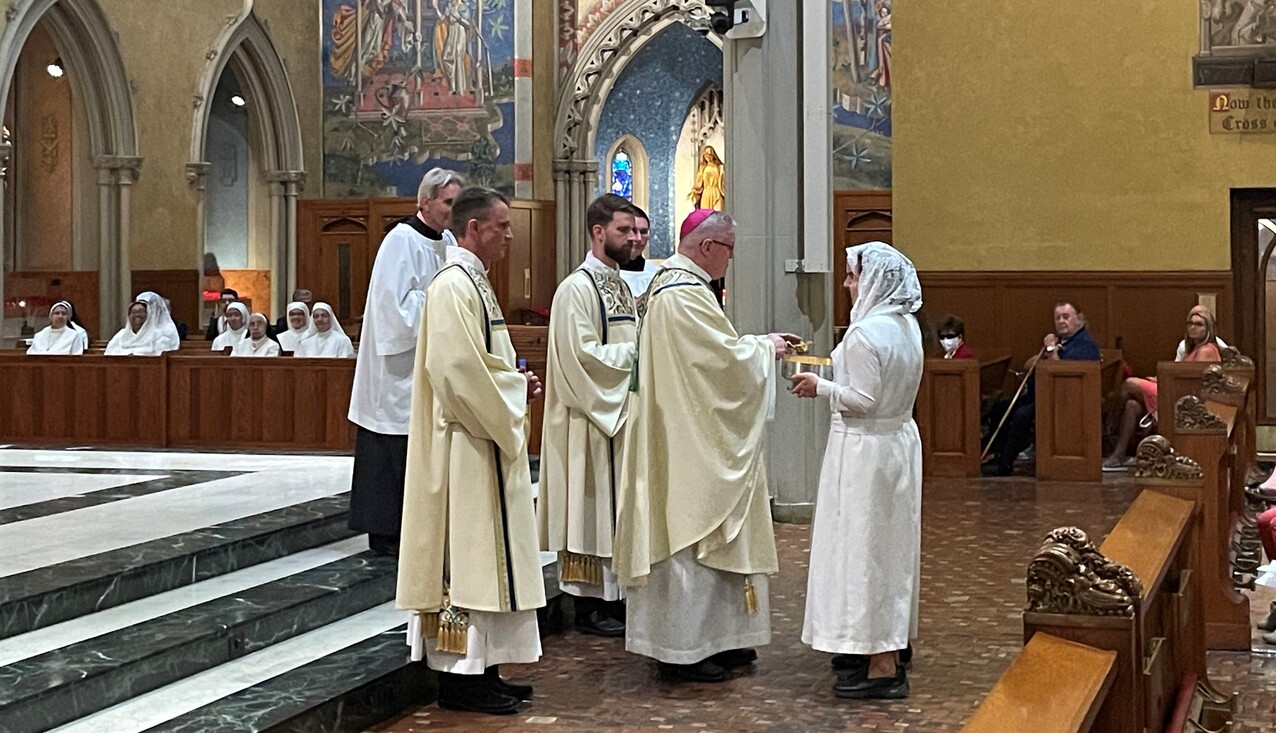 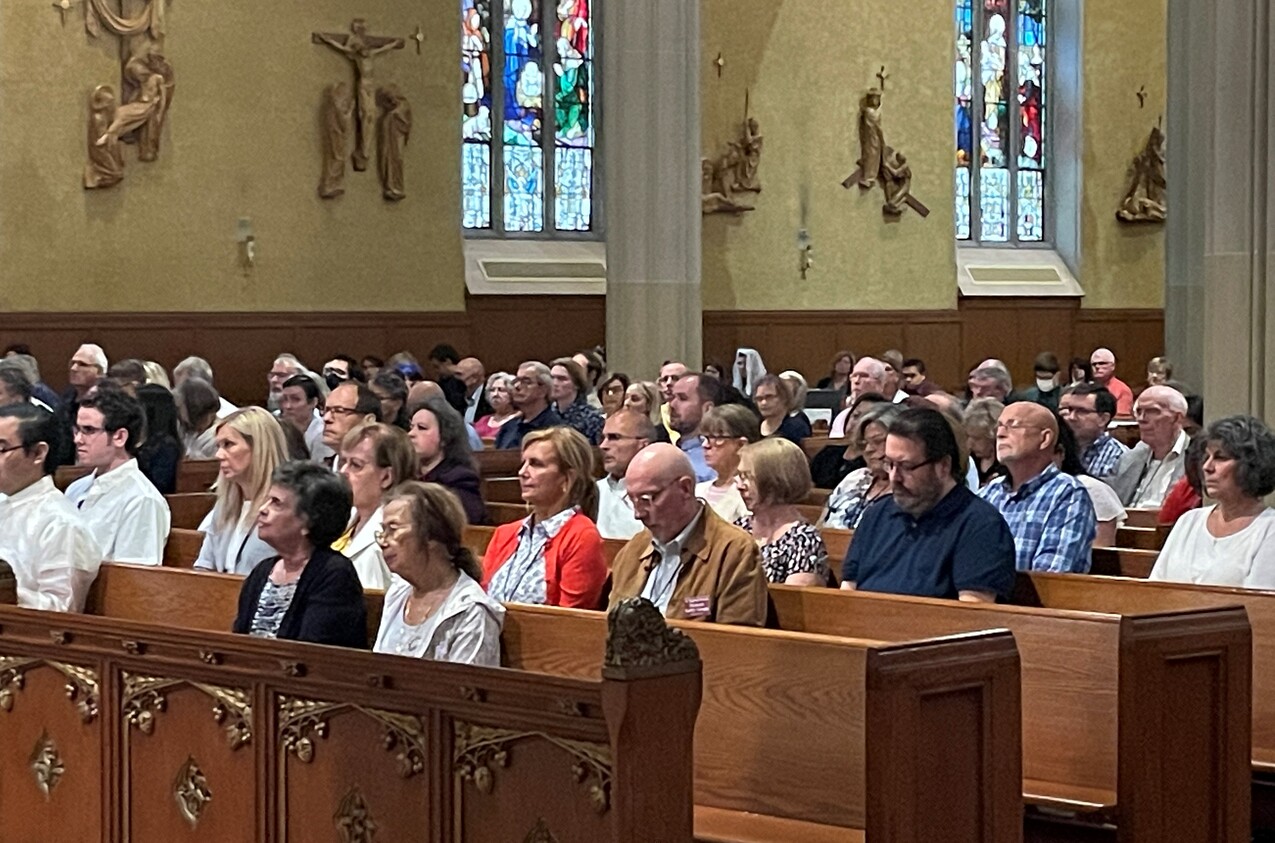 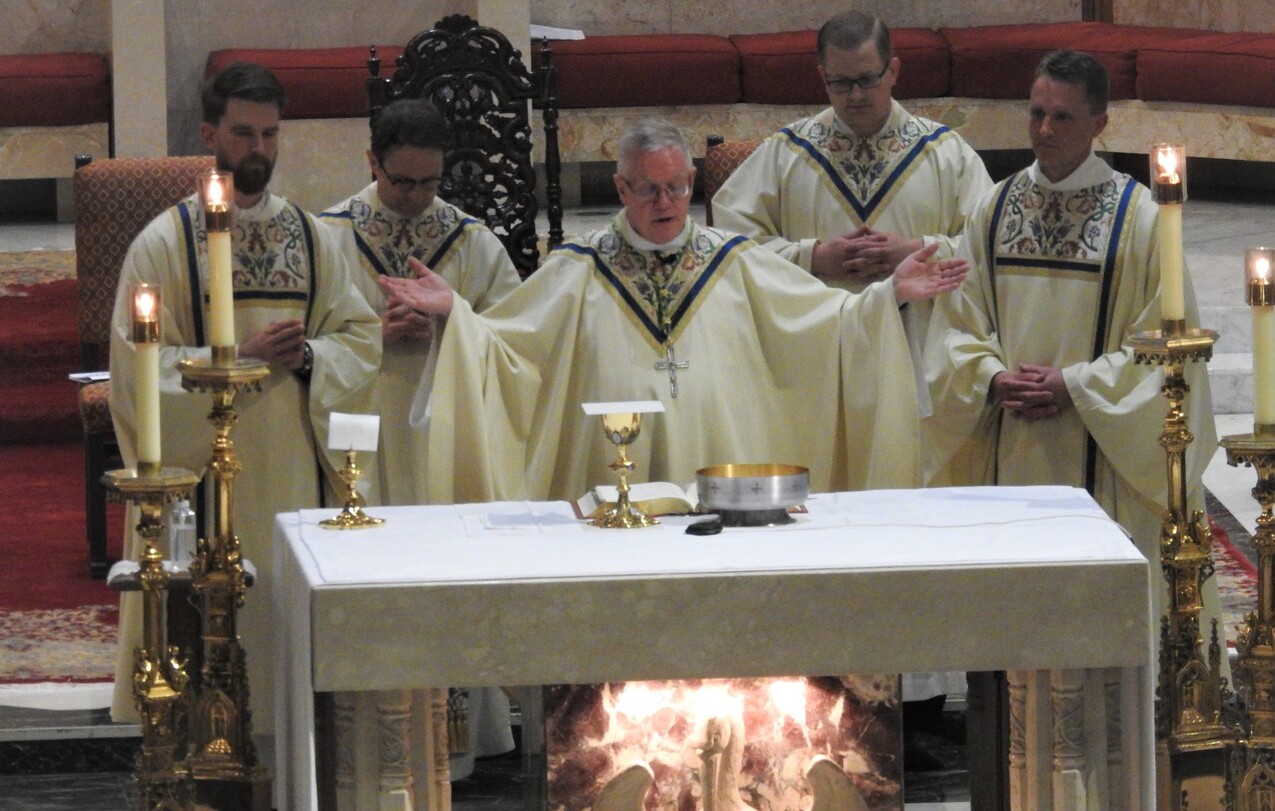 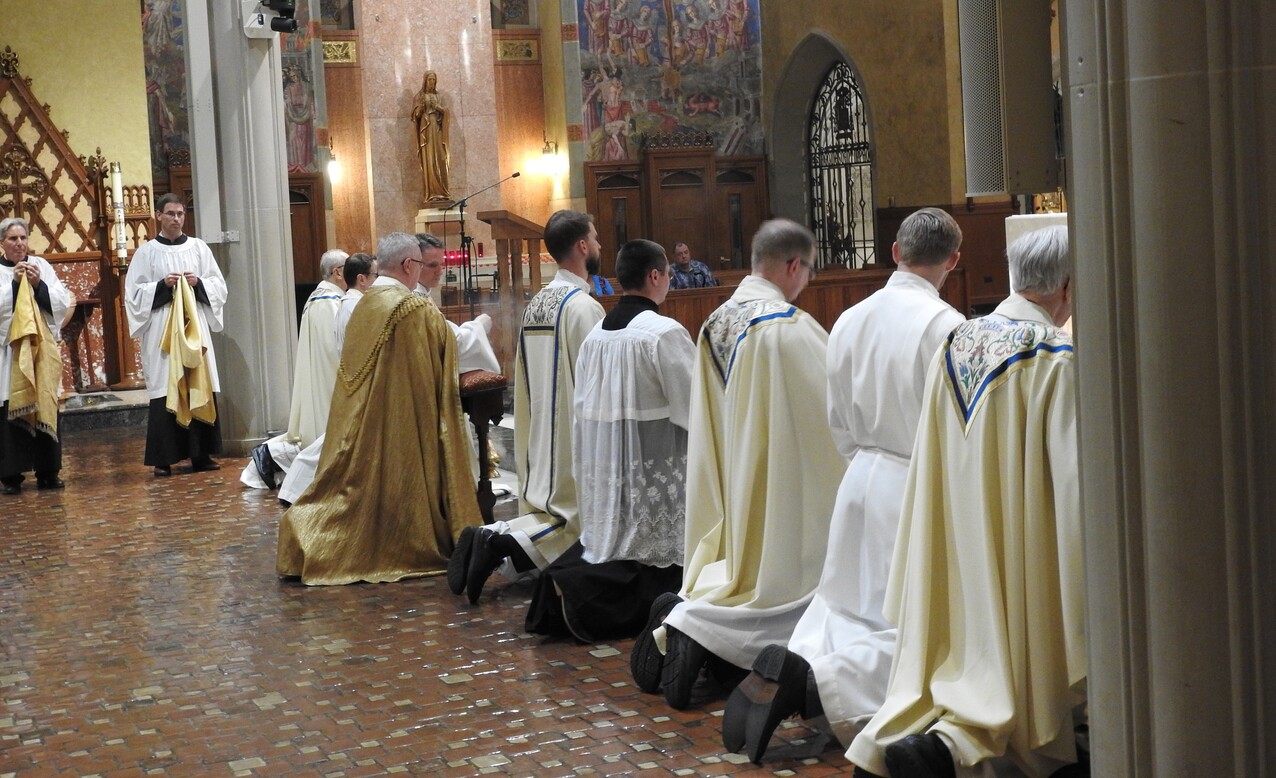 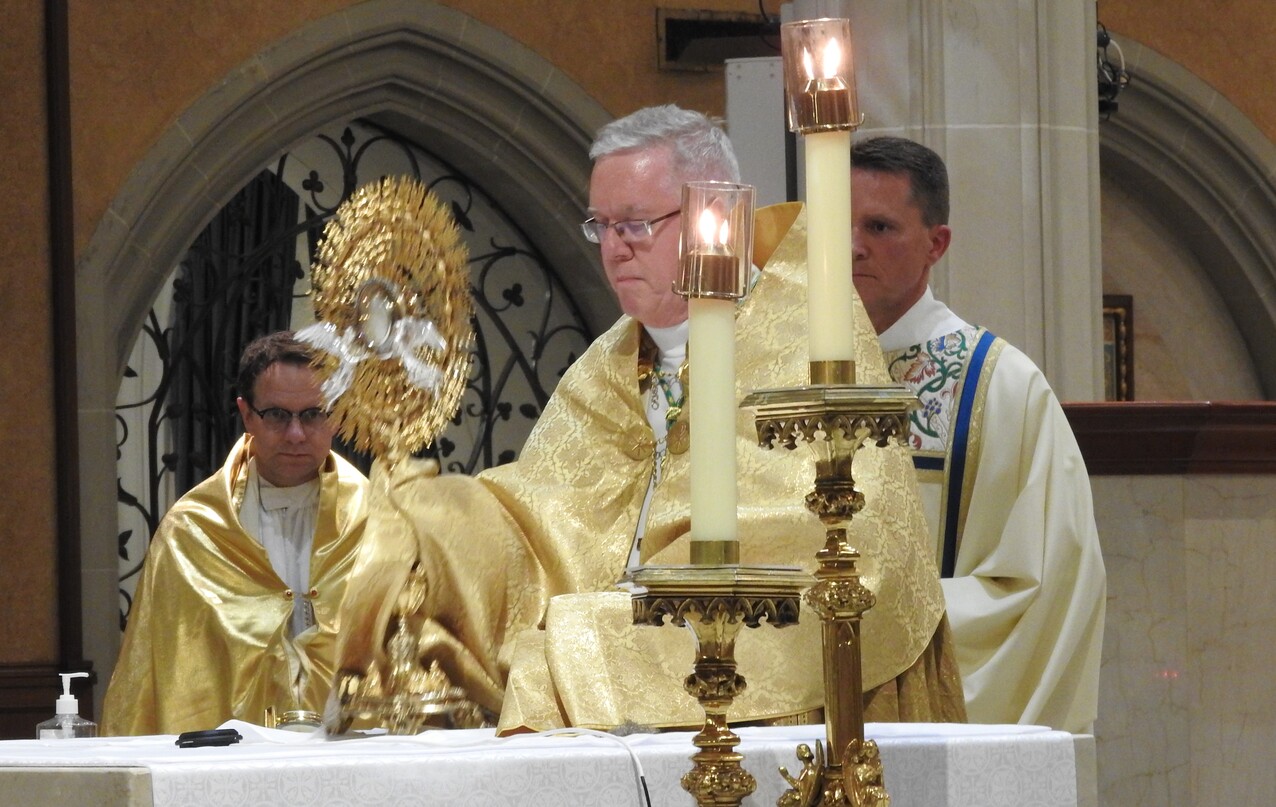 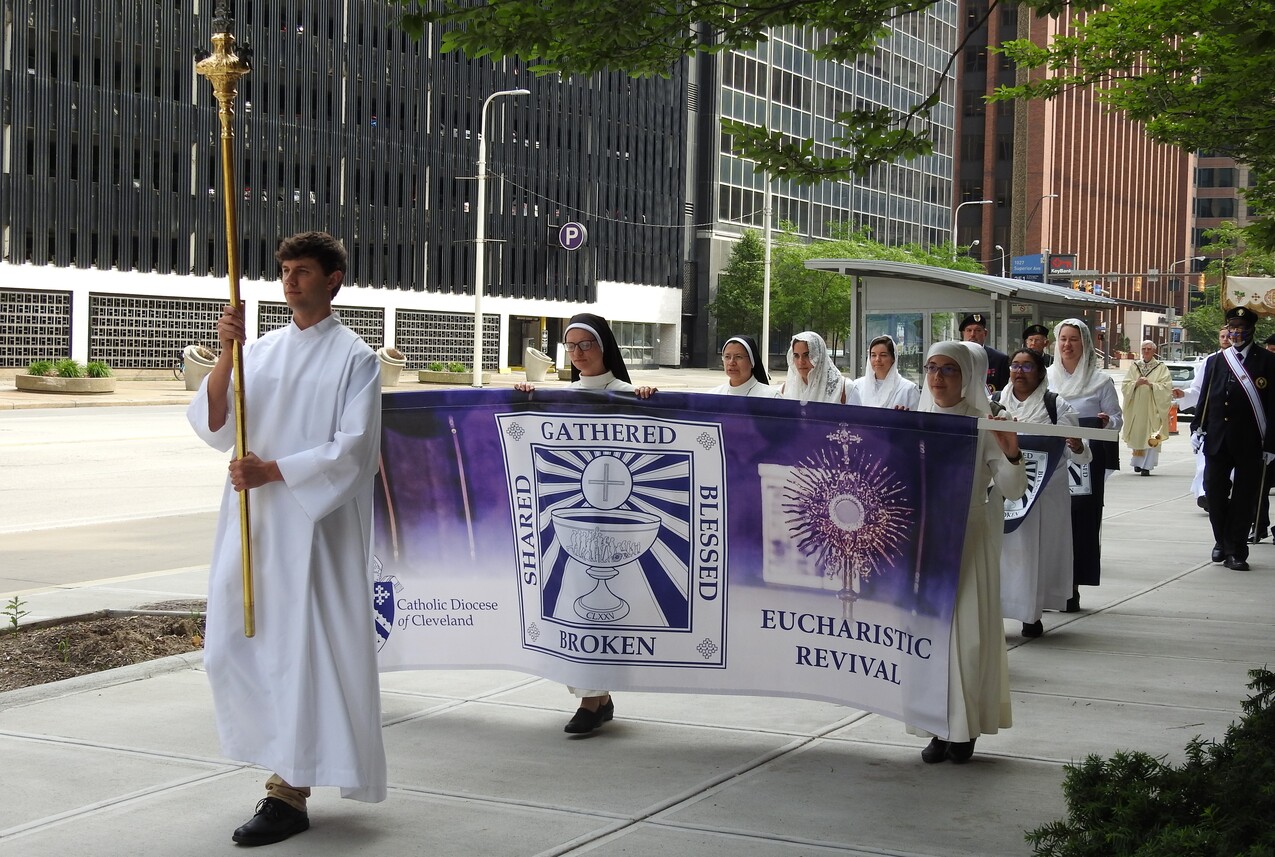 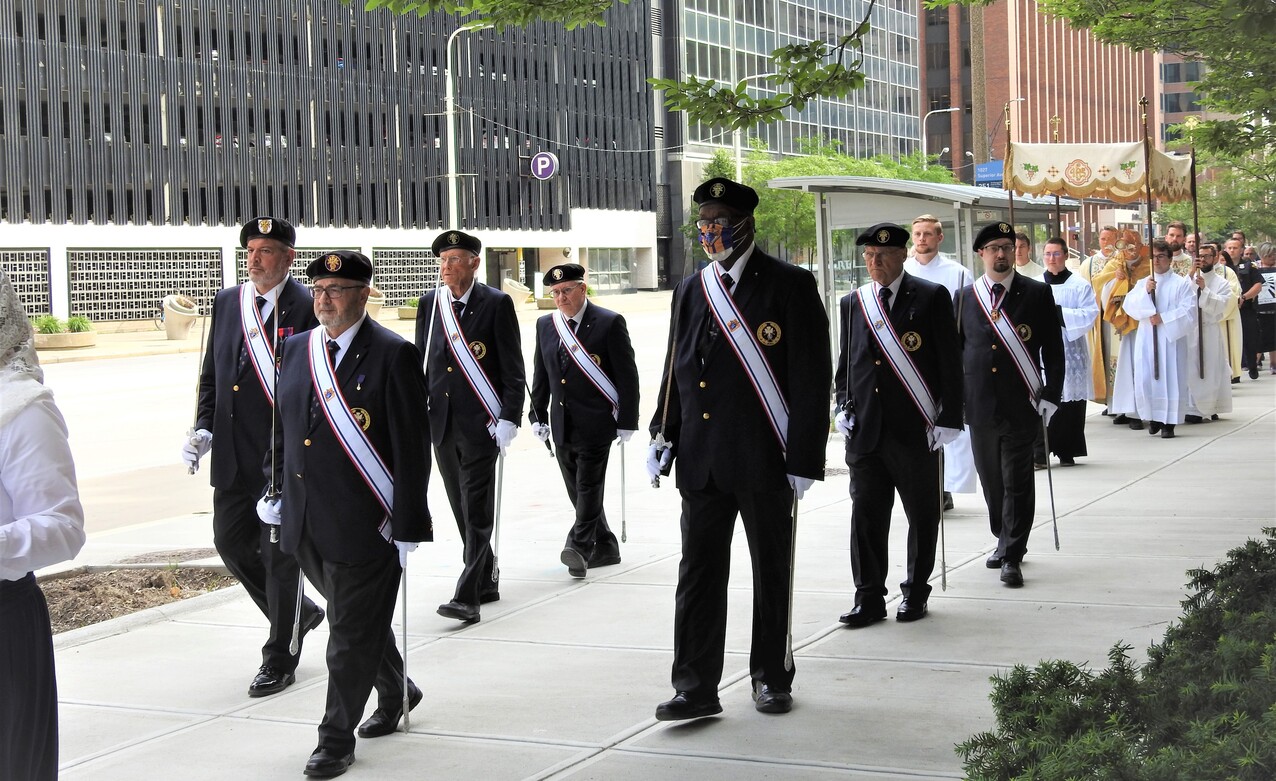 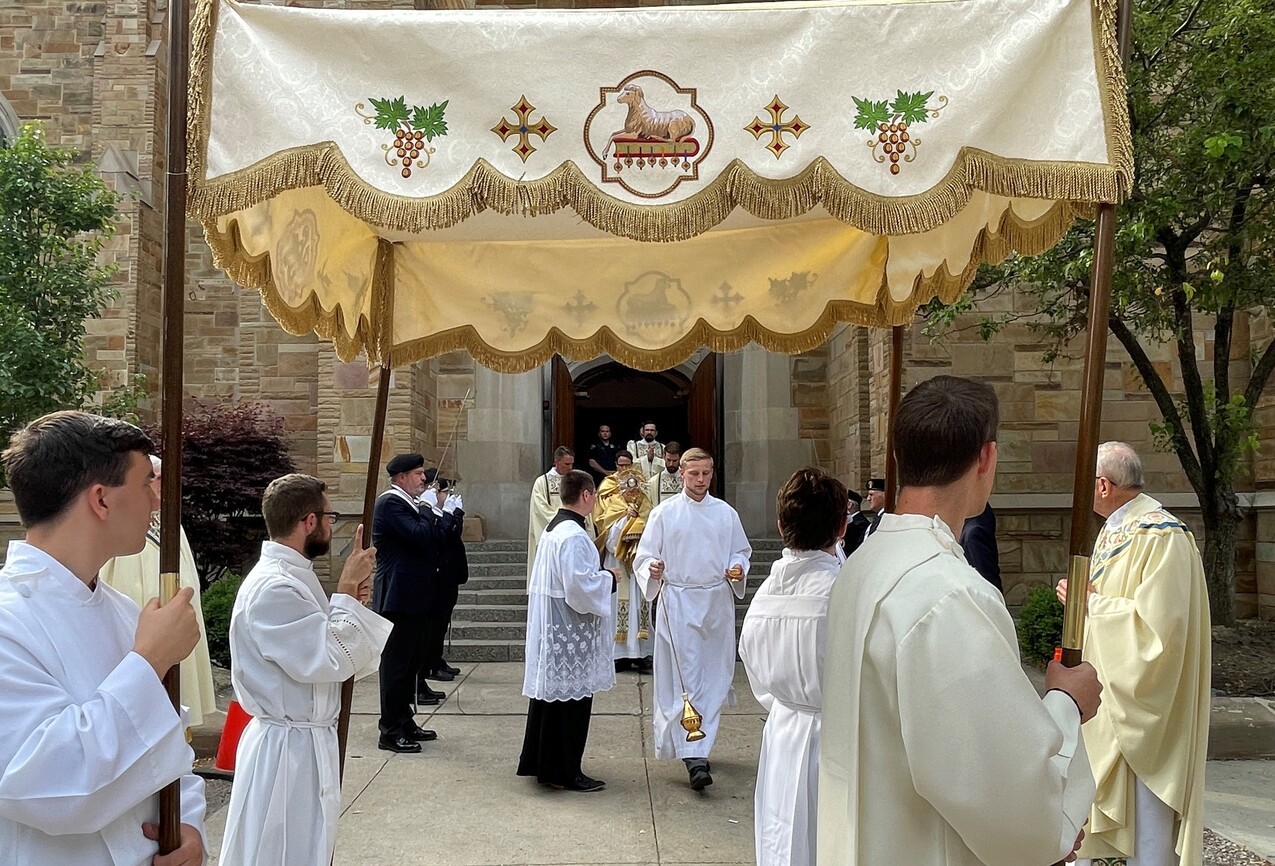 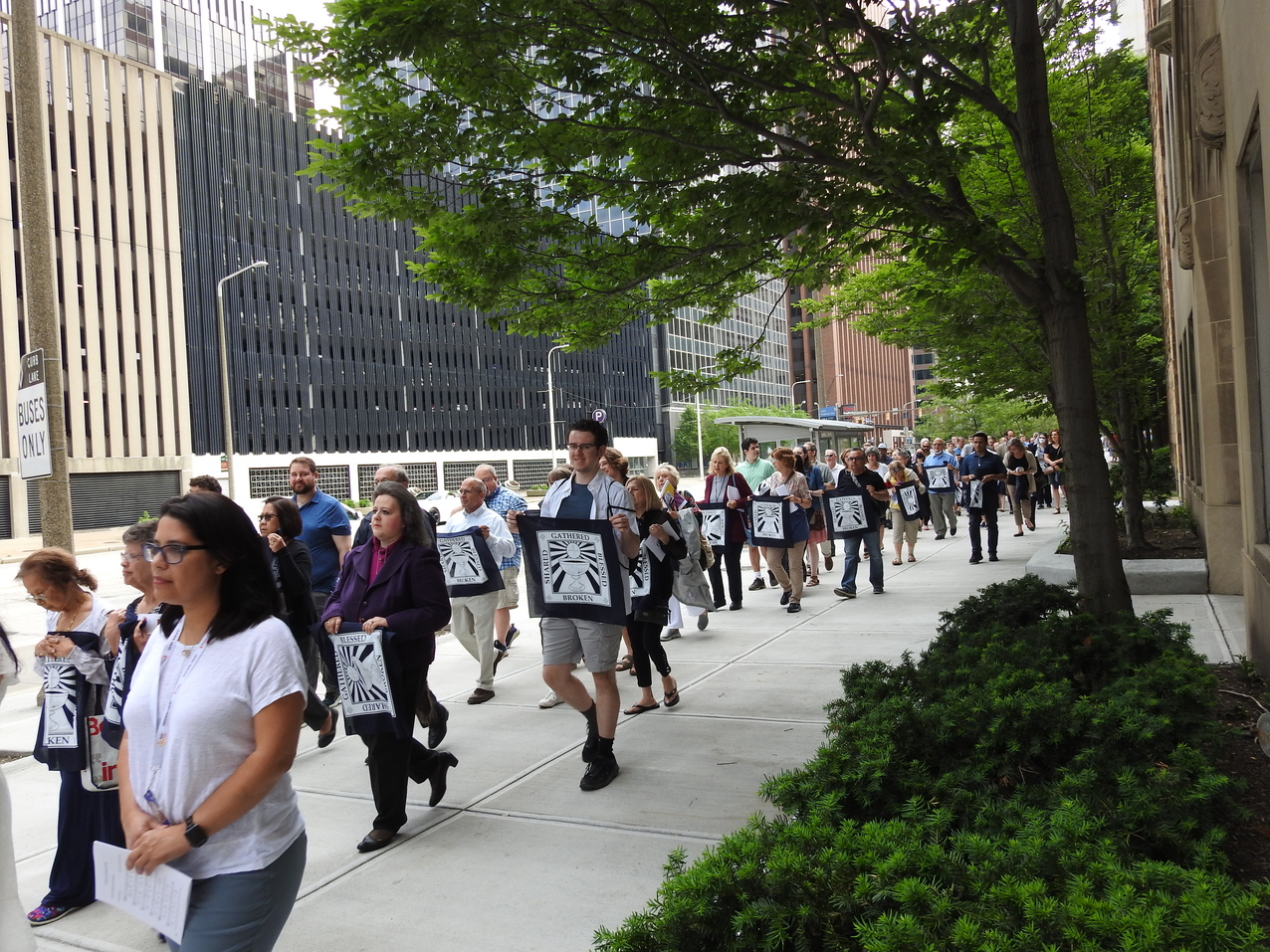 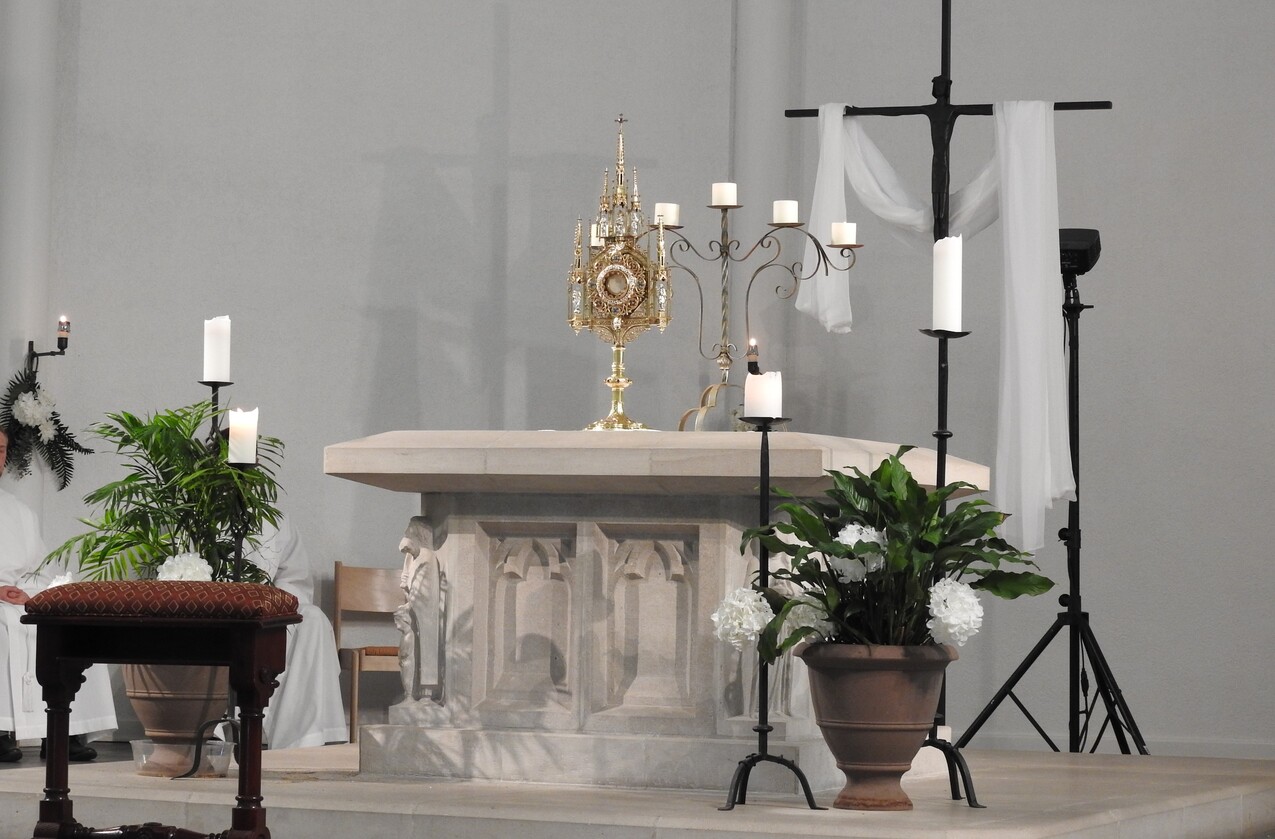 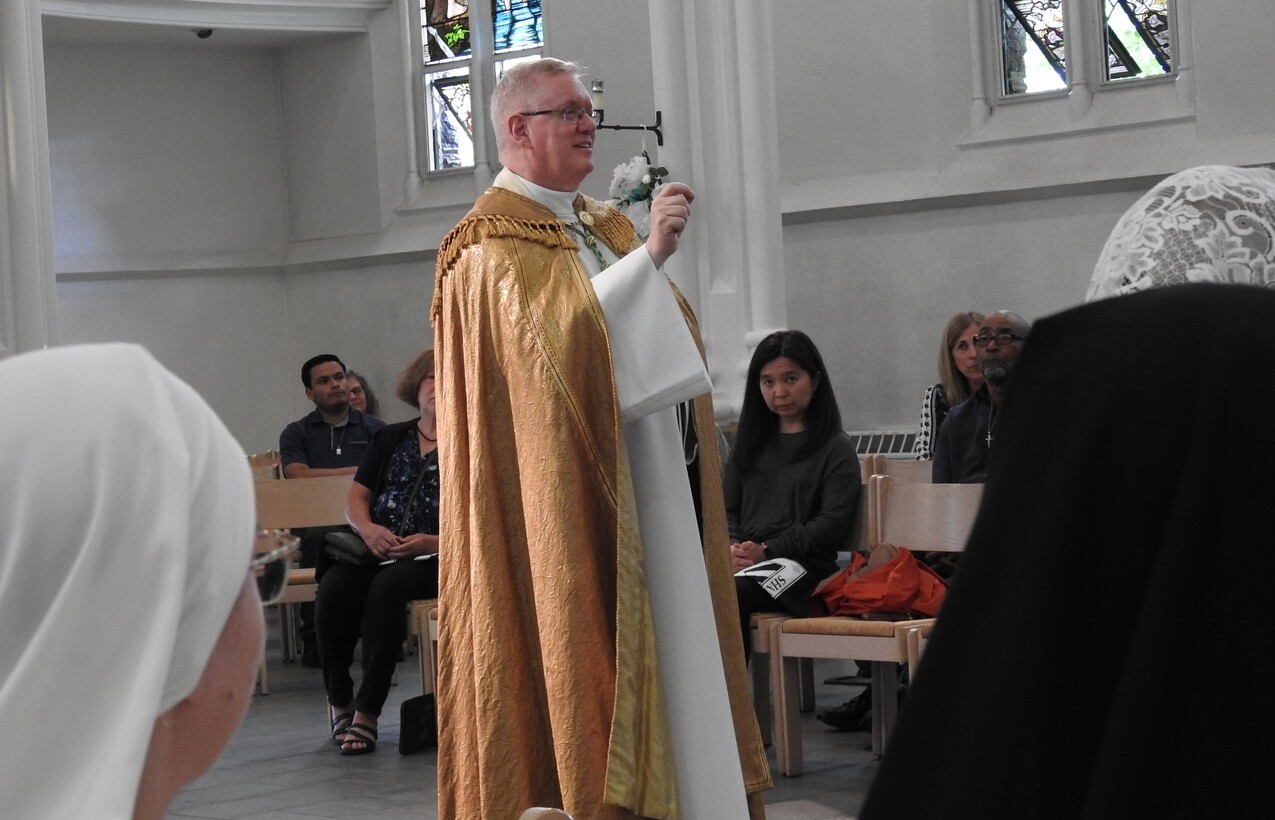 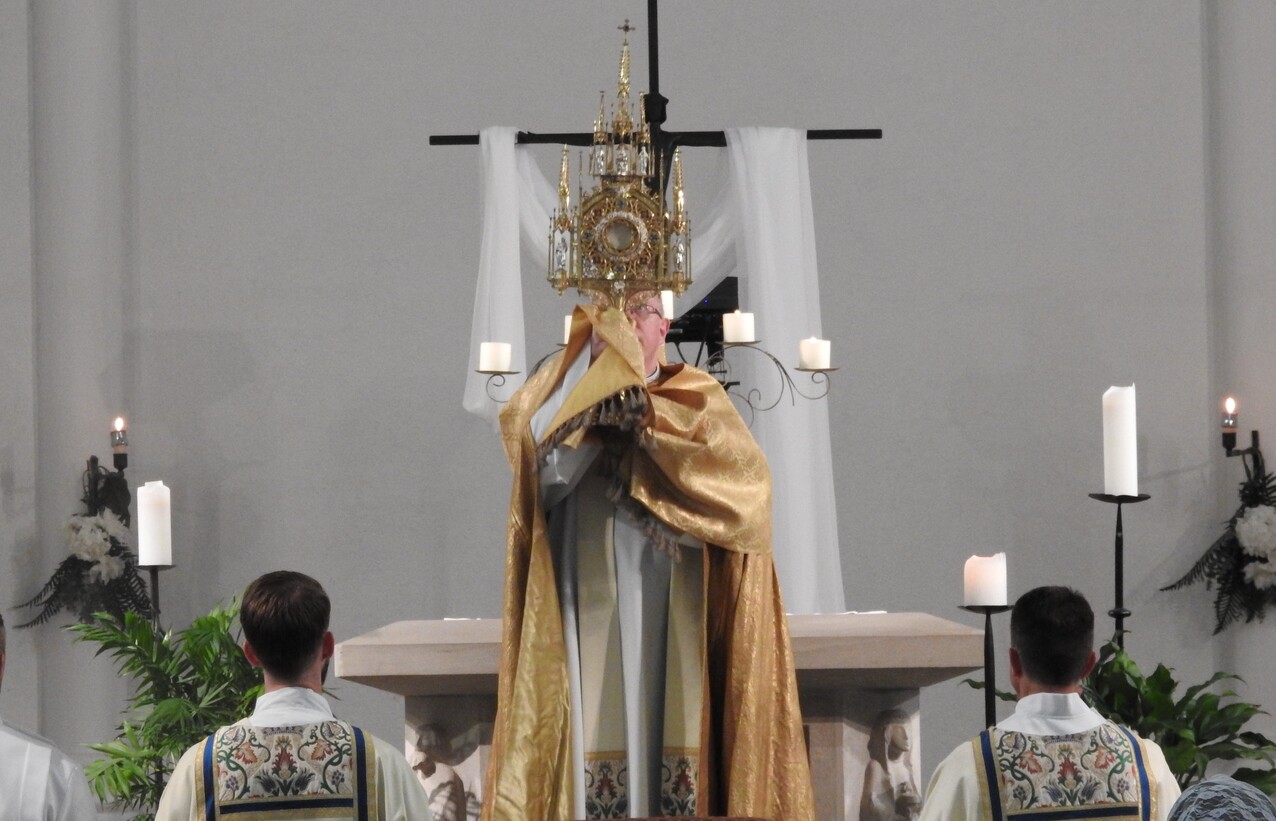 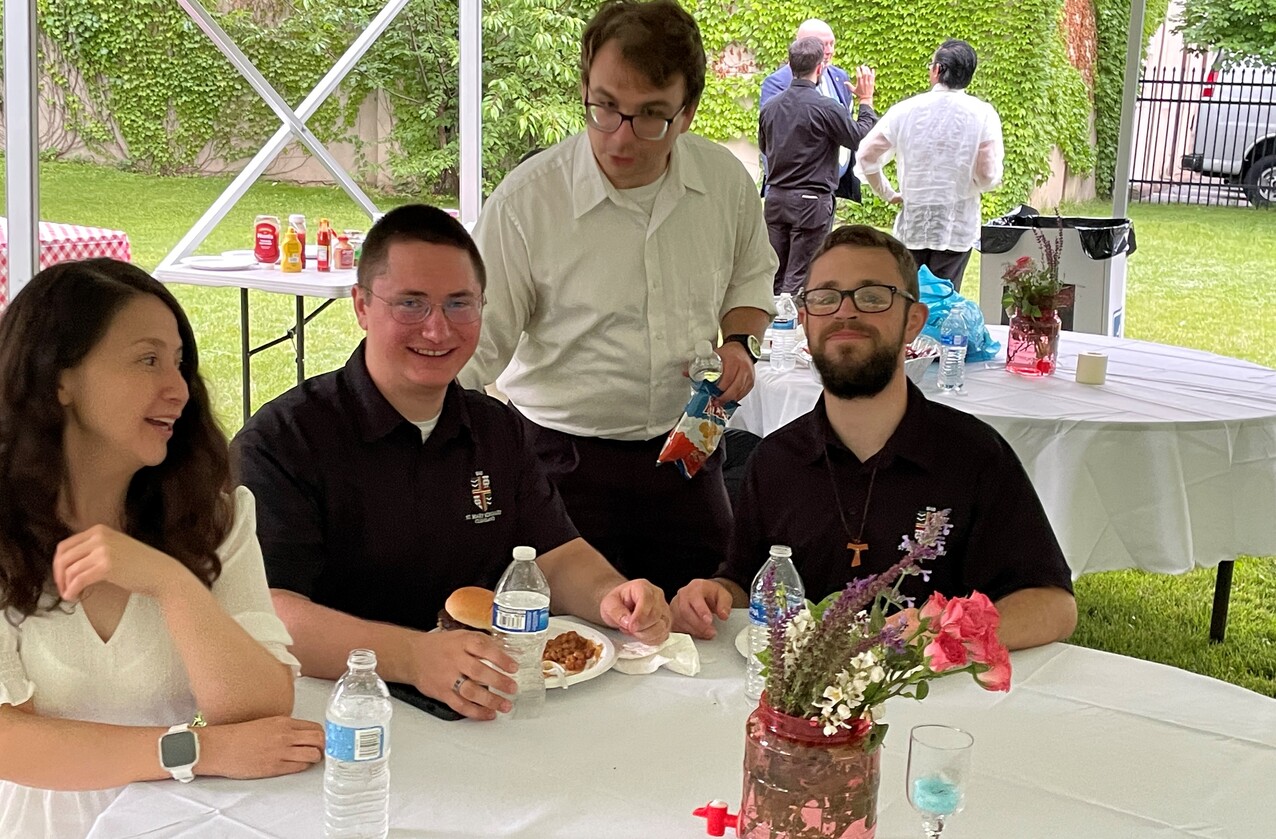 Although the National Eucharistic Revival officially begins this weekend with the feast of Corpus Christi – the solemnity of the most holy body and blood of Christ – the Catholic Diocese of Cleveland started the process a week earlier on June 11.

After concluding the diocesan pre-synodal process with a daylong event that drew nearly 300 people to Cleveland’s Public Auditorium, all were invited to process to the nearby Cathedral of St. John the Evangelist for a Mass to open the revival.

Bishop Edward Malesic had planned to celebrate the Mass and lead the Eucharistic procession after Mass. However, because of his father’s funeral, he was unable to attend, so Bishop-elect Michael Woost stepped in.

The bishop-elect read a letter from Bishop Malesic expressing his disappointment at being unable to attend in person. He explained he was in Harrisburg, Pennsylvania with his family after burying his 104-year-old father the day before (June 10). “I appreciate your understanding,” he wrote.

“Even though the formal portion of the Synod on Synodality came to a close in our diocese, we must continue the listening process with respect,” he wrote, encouraging the faithful to remain “vibrant, vital and always faithful to Jesus who is the way, the truth and the life. I am saddened that I could not be here with you,” he said, directing them to “Take Jess from the church to the streets,” which they would do after Mass with the Eucharistic procession.

During the Mass, the three images that were present in the cathedral for the opening of the diocesan synodal process – Our Lady of Guadalupe, St. John the Evangelist and Blessed Carlo Acutis – once again were in the sanctuary. They marked the transition from the synod to the revival.

Father Damian Ference, vicar for evangelization and director of the Office of Parish Life and Special Ministries, was appointed by the bishop as co-director of both the diocesan synodal process and the Eucharistic Revival. He was a concelebrant and the homilist and the opening Mass for the revival.

The pandemic helped remind us that the Church is meant to be together, to walk together, he said. “We must get together and model for the world what it’s like to listen to each other. Our world needs this,” he said, emphasizing the importance of working together.

Our respect and love also must be extended to those who are different than we are. Jesus goes to the peripheries and listens to people with love and respect, he said, as we should.

“In the Eucharist, Jesus Christ made himself the real presence to feed us. For 2,000 years, Jesus has been feeding us with himself. He doesn’t abandon us. He’s always here … He makes us who we are,” he said, adding that “Jesus sends us from this place (the cathedral/church) to take that grace to others glorifying the Lord by his presence.”

After Mass, Bishop-elect Woost carried a monstrance as he walked about a half-mile under a baldacchino (an ornate canopy) along Superior Avenue to St. Peter Church, one of the oldest churches in the diocese. It was established in 1853, just six years after the diocese was created.

The Knights of Columbus served as an honor guard for the Mass, procession and XLT/adoration that followed. Members of the Mercedarian Sisters of the Blessed Sacrament carried a large banner at the head of the procession while the faithful received bandanas imprinted with the diocesan revival logo: Gathered, Blessed, Broken, Shared.

The bishop-elect was the homilist at XLT. As he stood before the monstrance on the altar, he asked, “Who’s looking at who?”

He told those gathered that we come to the Lord with our own needs and desires and we find love, hope and fulfillment.

Worshipers spent time in reflection, prayer and song before the XLT/adoration concluded. Afterward, the congregation moved outdoors under a large tent for a cookout and social.