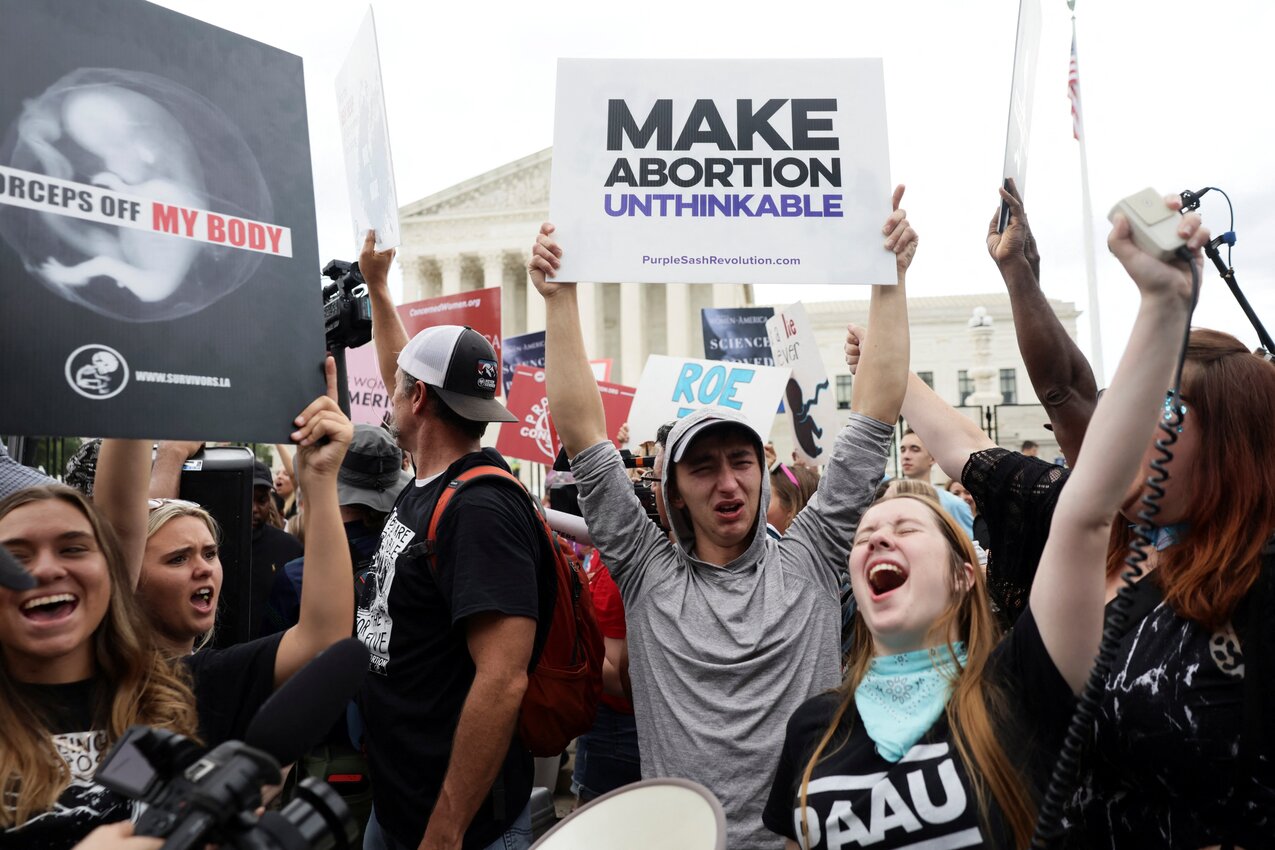 “This is a day that will long be remembered. It's a historic moment not only in the nation, but in the life of the Church," said Mary von Carlowitz, director of the Diocese of Cleveland Office for Human Life, after hearing that the Supreme Court of the United States overruled the Roe v. Wade decision.

In a 6-3 decision announced the morning of June 24, SCOTUS overturned its nearly 50-year-old Roe v. Wade decision that legalized abortion in this country. The current case was Dobbs v. Jackson Women’s Health Organization, which focused on an abortion clinic in Mississippi opposed to the state’s law that banned abortion after 15 weeks of pregnancy.

The court’s 213-page ruling was not unexpected. A draft opinion penned by Associate Justice Samuel Alito was leaked about a month ago. The June 24 ruling emphasizes that there is no constitutional right to abortion in the United States.

“We’ve been praying for this day for nearly 50 years. Our brothers and sisters across the diocese will praise God for this affirming view of life,” Von Carlowitz said. “We’ve waited so long and had much pain along the way.”

She said her office has been working to ensure that the necessary resources and support are available for any women who need them. “We have been journeying with expectant and post-abortive moms and will continue to do so. Now comes our finest hour. Going forward, we rejoice in this moment for justice as we look to the future and our continued commitment to advocate for the dignity and sanctity of life at every stage. We’ve been here all along and will continue to accompany mothers in need.”

The decision’s timing – on the solemnity of the Most Sacred Heart of Jesus and first anniversary of her tenure as office director – was not lost on Von Carlowitz. “This is truly a day of praise as we enter this new post-Roe world as instruments of love, mercy and compassion for all women, the preborn and the family.”

Von Carlowitz said her office has many resources available to help pregnant women and to support post-abortive women, including referrals for counseling and medical assistance, housing, day care, infant layettes and more. Click here for the Office for Human Life web page.

In addition, Catholic Charities, Diocese of Cleveland, has a helpline, 800-860-7373, to assist with emergency needs.

The court's reversal of its long-standing abortion ruling returns abortion policy decisions to the state level. At least half of states plan to ban or restrict abortions with this decision in place. Ohio enacted a ban on abortion after six weeks of pregnancy. There are no exceptions for rape or incest. The ban was challenged in court, but less than an hour after announcement of the SCOTUS decision, Ohio Attorney General Dave Yost tweeted that his office filed a motion in federal court to dissolve the injunction and allow enforcement of the ban.

"We hold that Roe and Casey must be overruled," Justice Samuel Alito wrote in the court's opinion. Casey v. Planned Parenthood is the 1992 decision that affirmed Roe. The SCOTUS’ landmark 7-2 Roe v. Wade decision was announced in 1973.

"The Constitution makes no reference to abortion, and no such right is implicitly protected by any constitutional provision, including the one on which the defenders of Roe and Casey now chiefly rely -- the Due Process Clause of the 14th Amendment," he added.

Catholic bishops across the country and other pro-life groups who have supported a reversal of Roe immediately reacted positively to the court's decision that comes at the end of this year's term.

From the United States Conference of Catholic Bishops’ statement: “Our first thoughts are with the little ones whose lives have been taken since 1973. We mourn their loss, and we entrust their souls to God, who loved them from before all ages and who will love them for all eternity. Our hearts are also with every woman and man who has suffered grievously from abortion; we pray for their healing, and we pledge our continued compassion and support. As a Church, we need to serve those who face difficult pregnancies and surround them with love.”

Cleveland Bishop Edward Malesic said in part: “I wholeheartedly applaud today’s decision by the U.S. Supreme Court which reverses the grave injustice of 1973, when Roe v. Wade decided that a whole class of human beings, the preborn, are outside the protection of the law and had no constitutional right to life. Since that decision, more than 60 million innocent lives have been sadly ended. Now that Roe is overturned, states will again be able to protect the lives of preborn children and in doing so, also protect millions of women from the tragic consequences of abortion.”

The Ohio Catholic Conference said in part: “The Catholic bishops of Ohio are encouraged by the United States Supreme Court Decision in Dobbs v. Jackson Women’s Health Organization. This is a positive step toward a desperately needed conversion to a culture of life in our country, one that respects the inherent dignity and sacredness of every human being from conception to natural death. This decision enables the possibility of the state of Ohio to fully protect the lives of preborn children. The Catholic Church in Ohio – including its dioceses, eparchies, parishes and social service ministries – remains committed to serving women in crisis pregnancies, both before and after delivery, with both material resources and personal accompaniment so that they can flourish and contribute to the common good."

Protestors, who were anticipating the decision, had been outside the court building in Washington, D.C. for days. Those on both sides of issue also were at the court when the document first leaked in early May.

The Dobbs opinion is similar to the leaked draft that called Roe "egregiously wrong from the start."

Justices Stephen Breyer, Sonia Sotomayor and Elena Kagan wrote a joint dissent that said: "Whatever the exact scope of the coming laws, one result of today's decision is certain: the curtailment of women's rights, and of their status as free and equal citizens."

They also noted that their dissent "with sorrow -- for this Court, but more, for the many millions of American women who have today lost a fundamental constitutional protection."

“We know that the struggle is not over. As we look to the future, we want to ensure that our parish communities are places of welcome for all mothers in need and that we are instruments of unwavering hope, mercy, love and compassion for all women,” Von Carlowitz added.