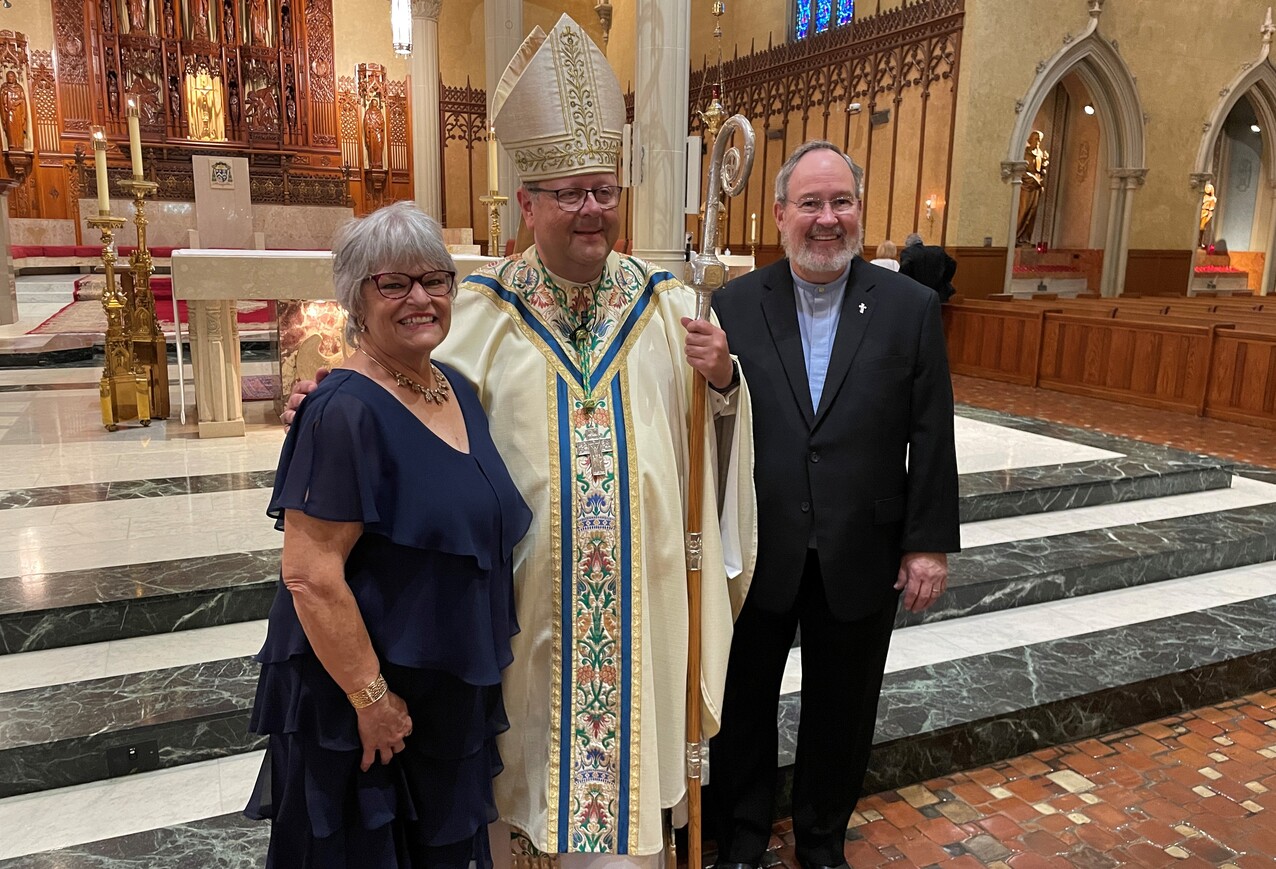 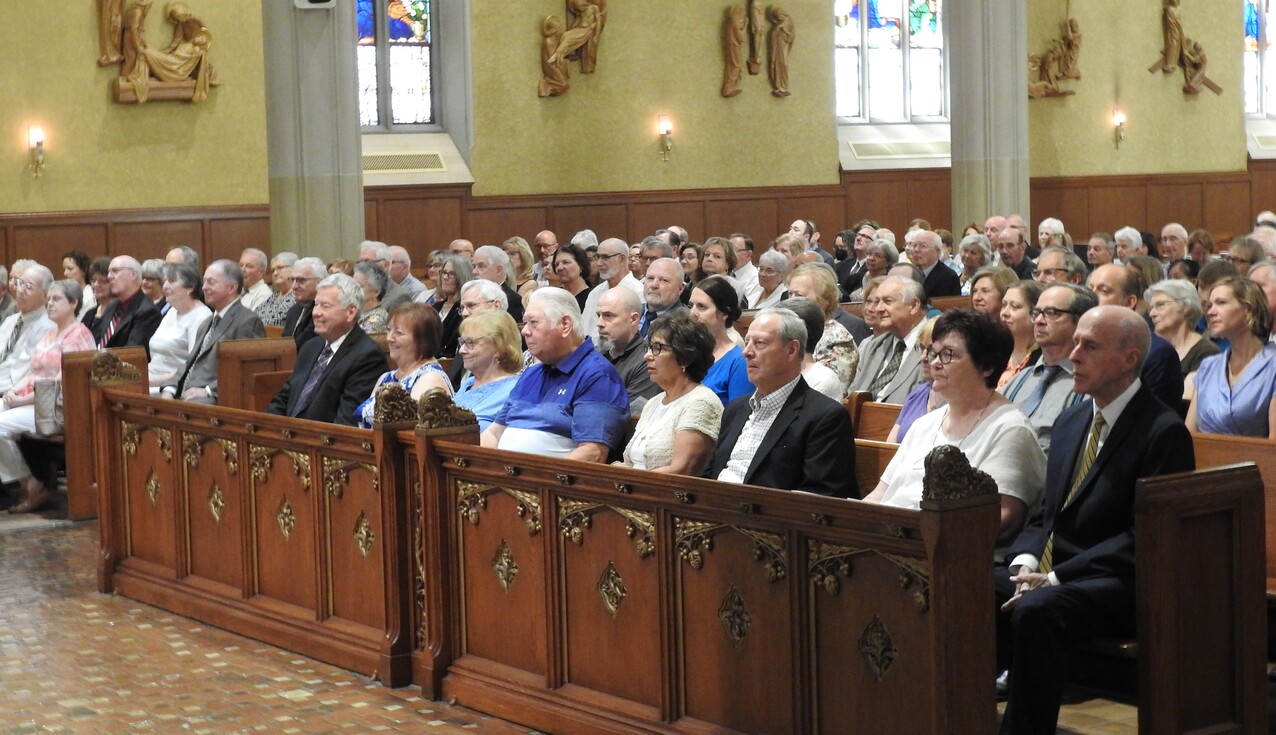 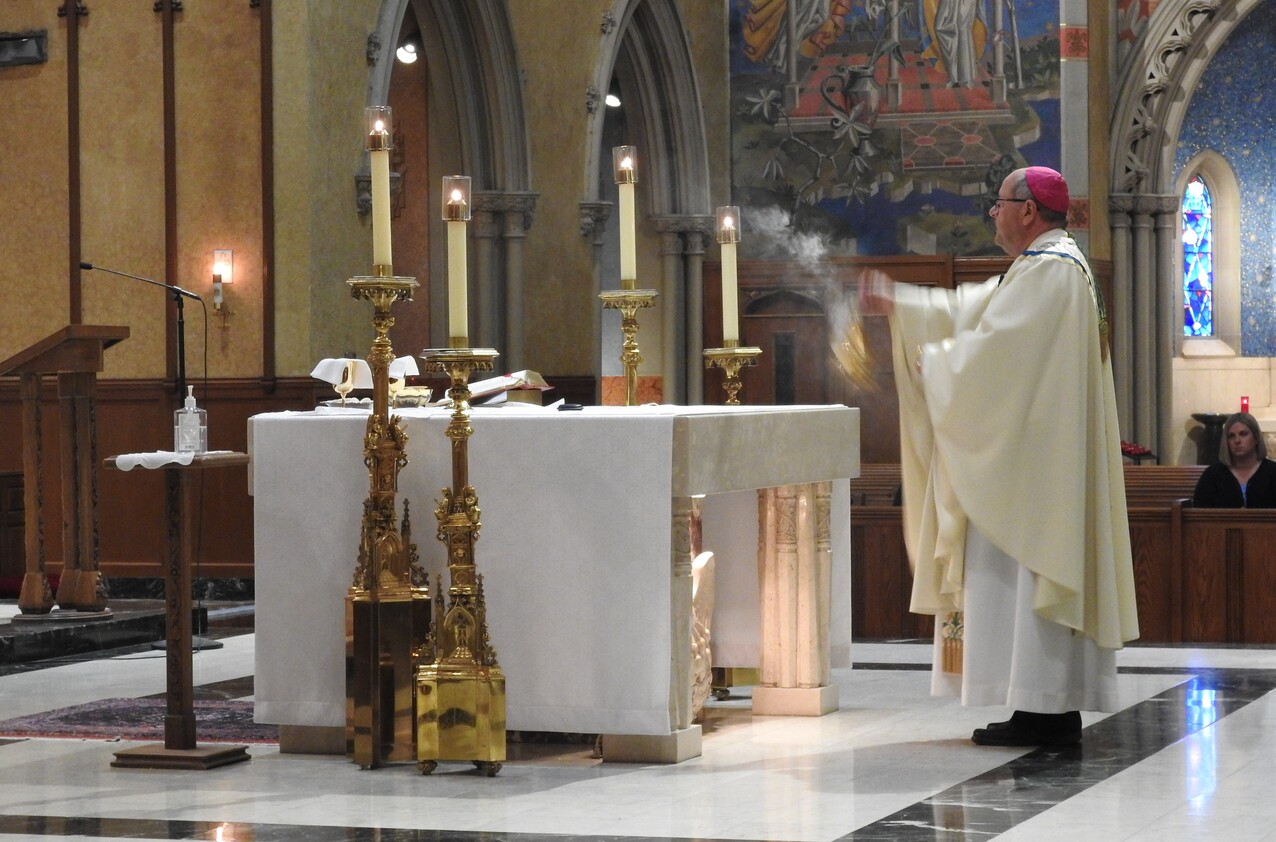 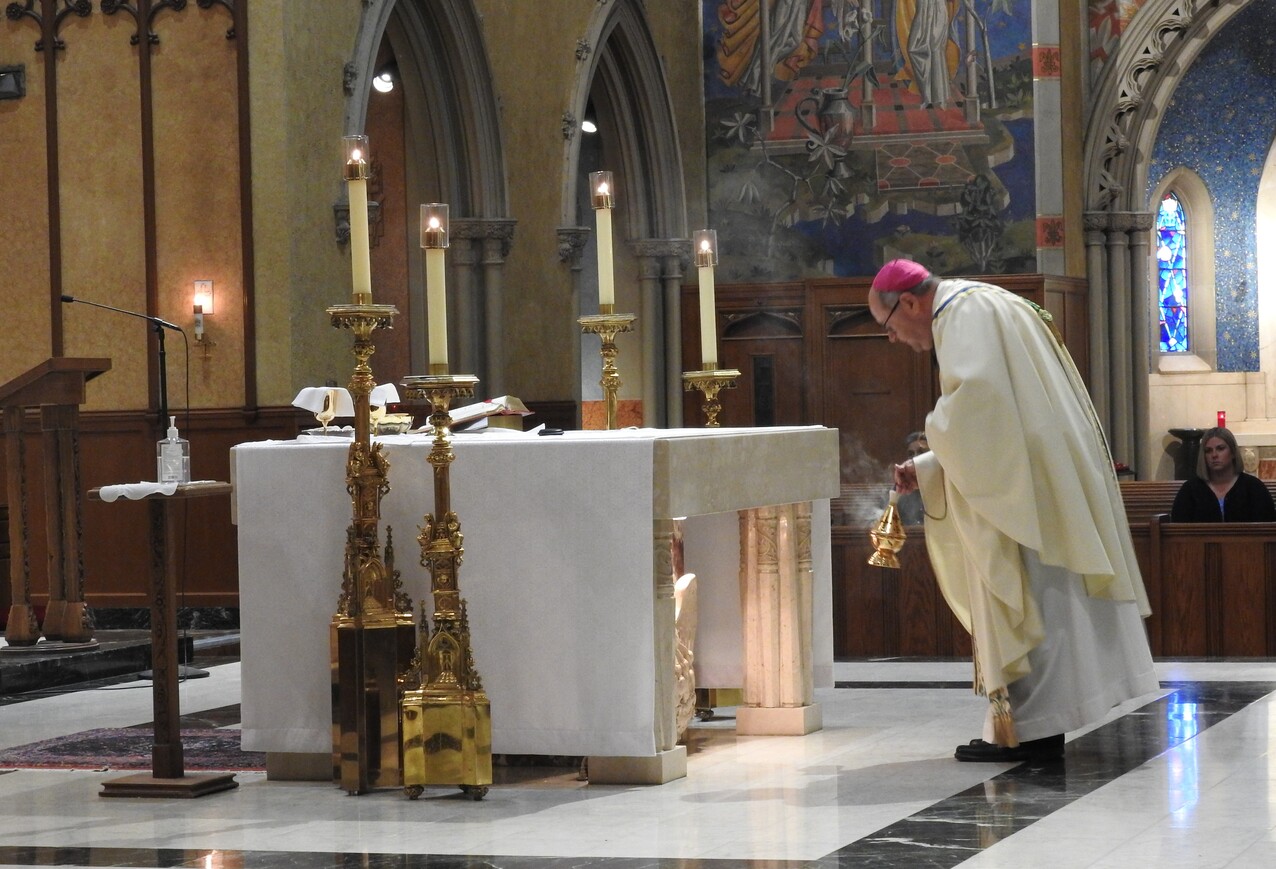 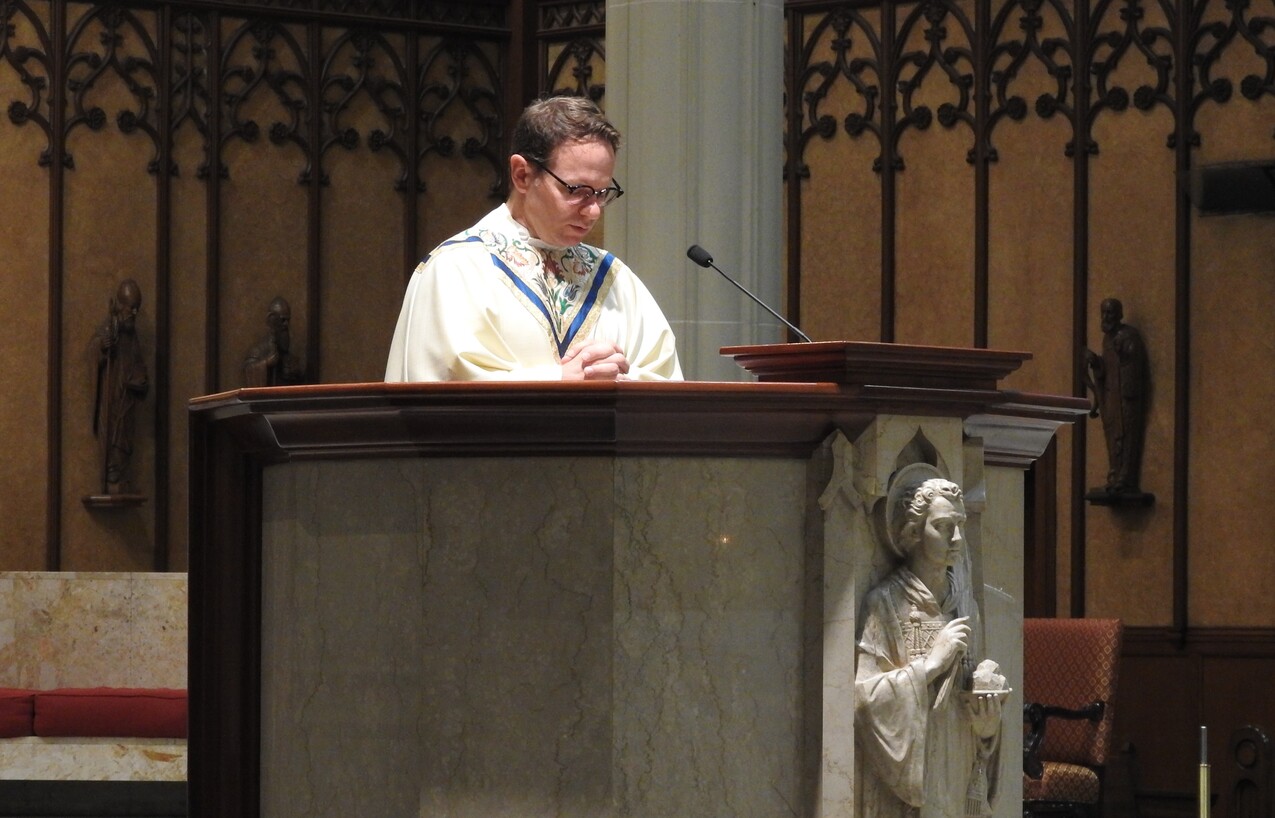 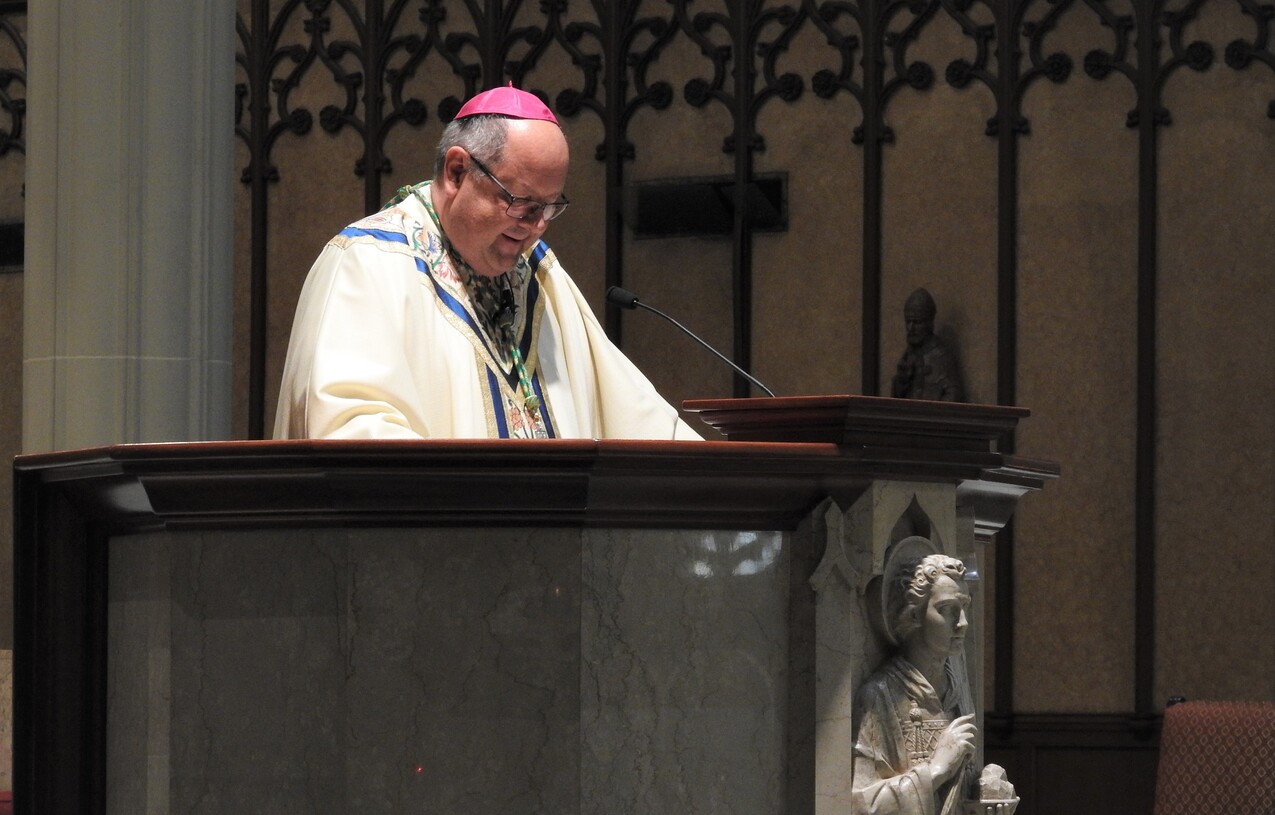 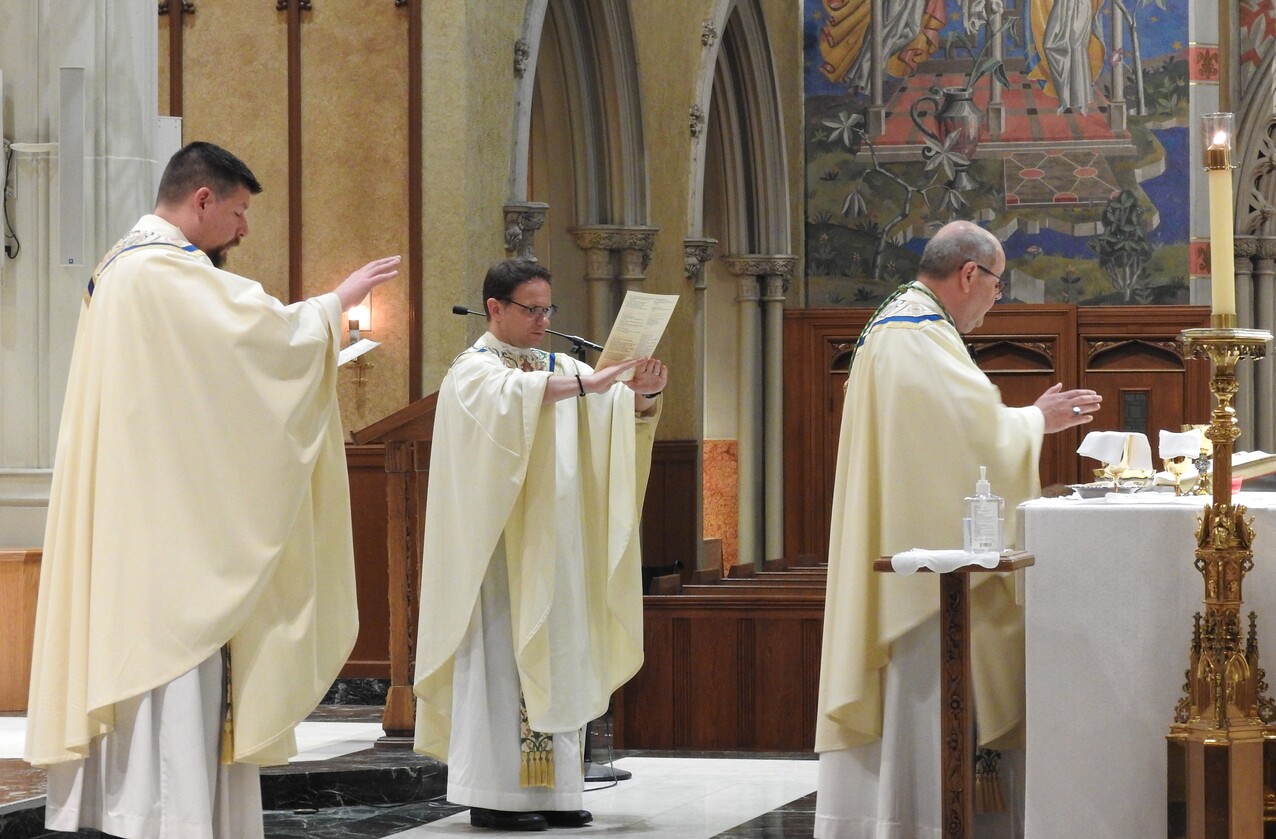 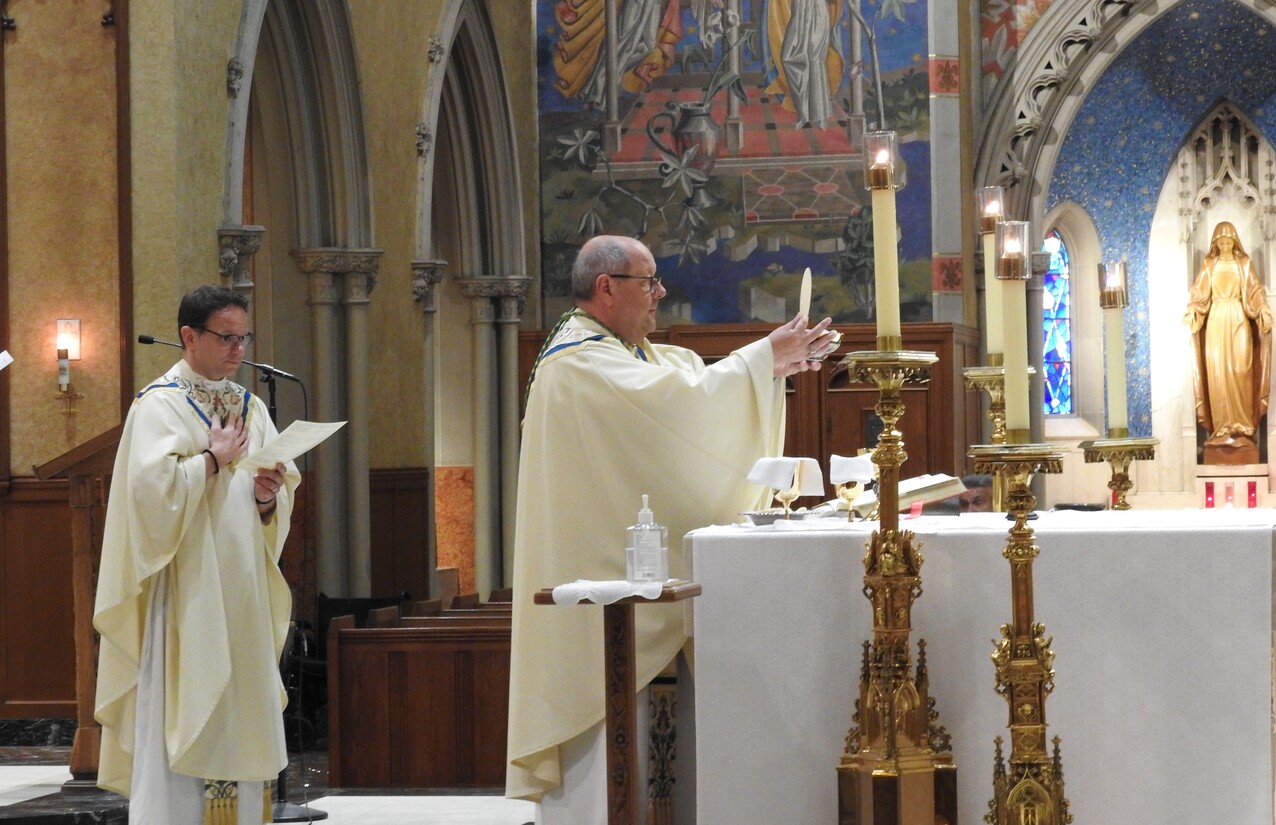 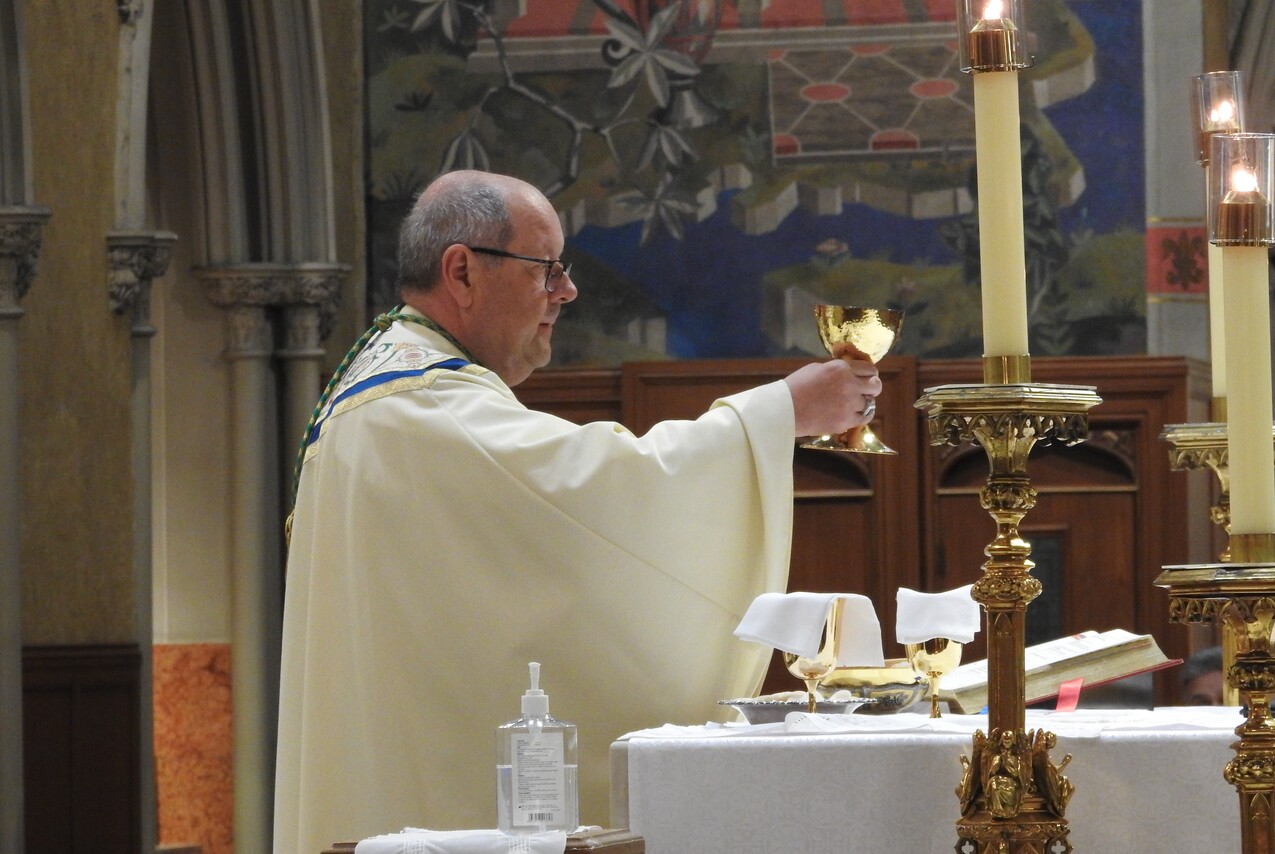 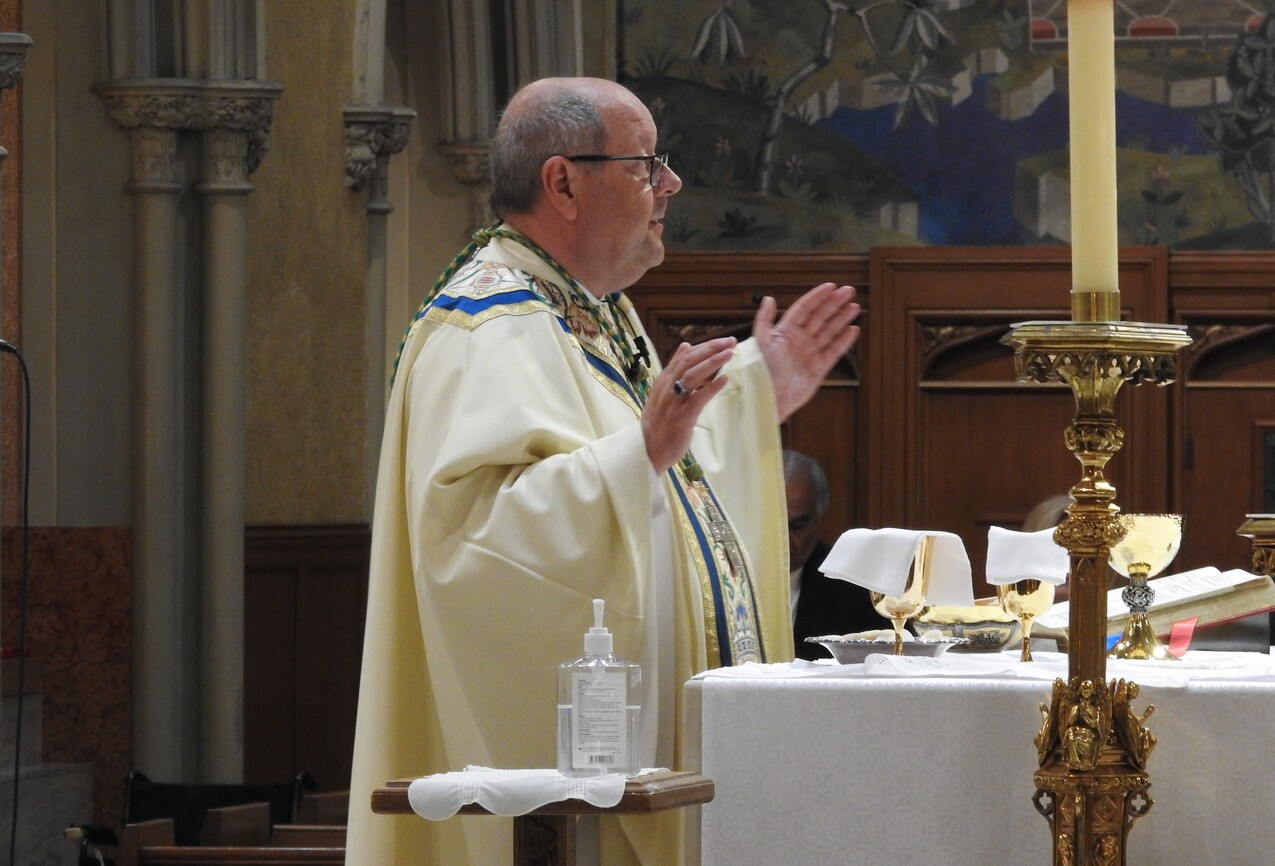 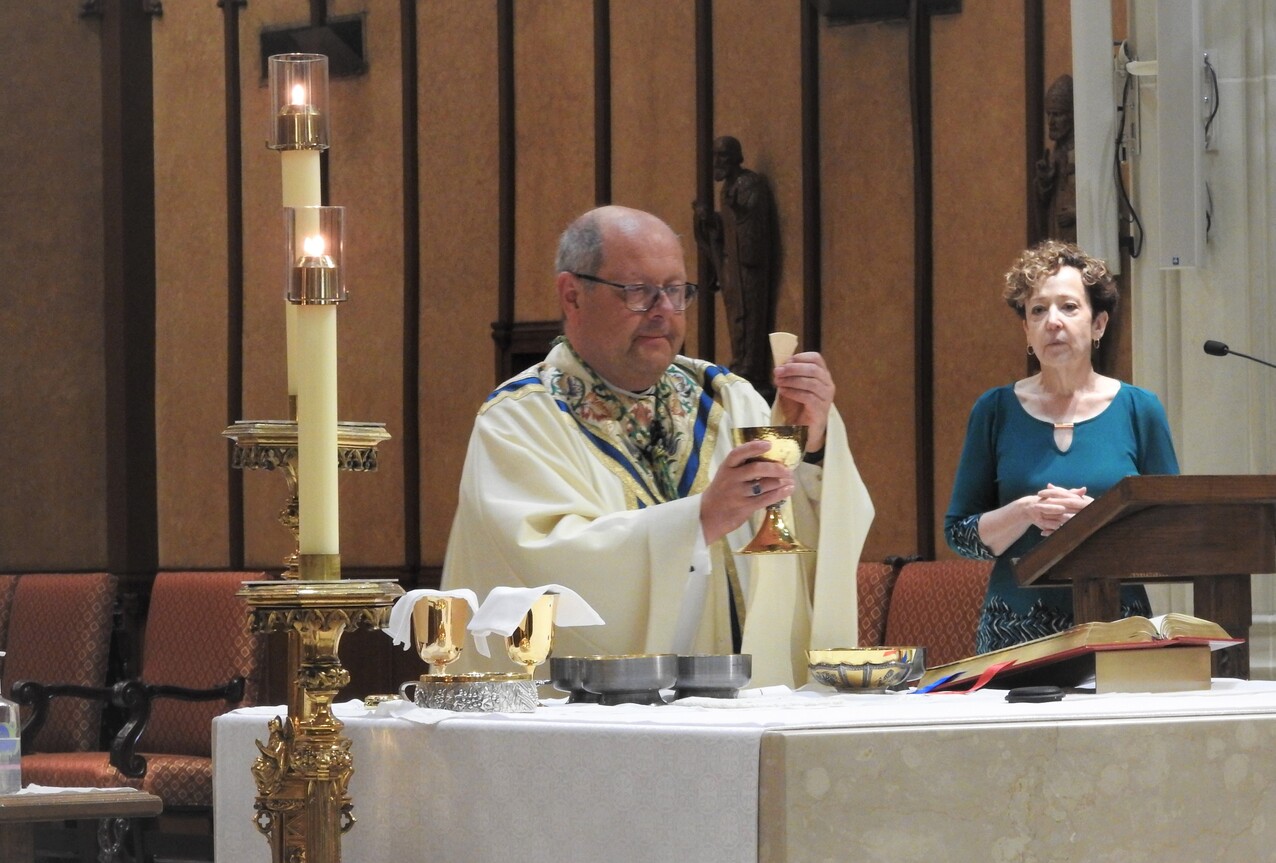 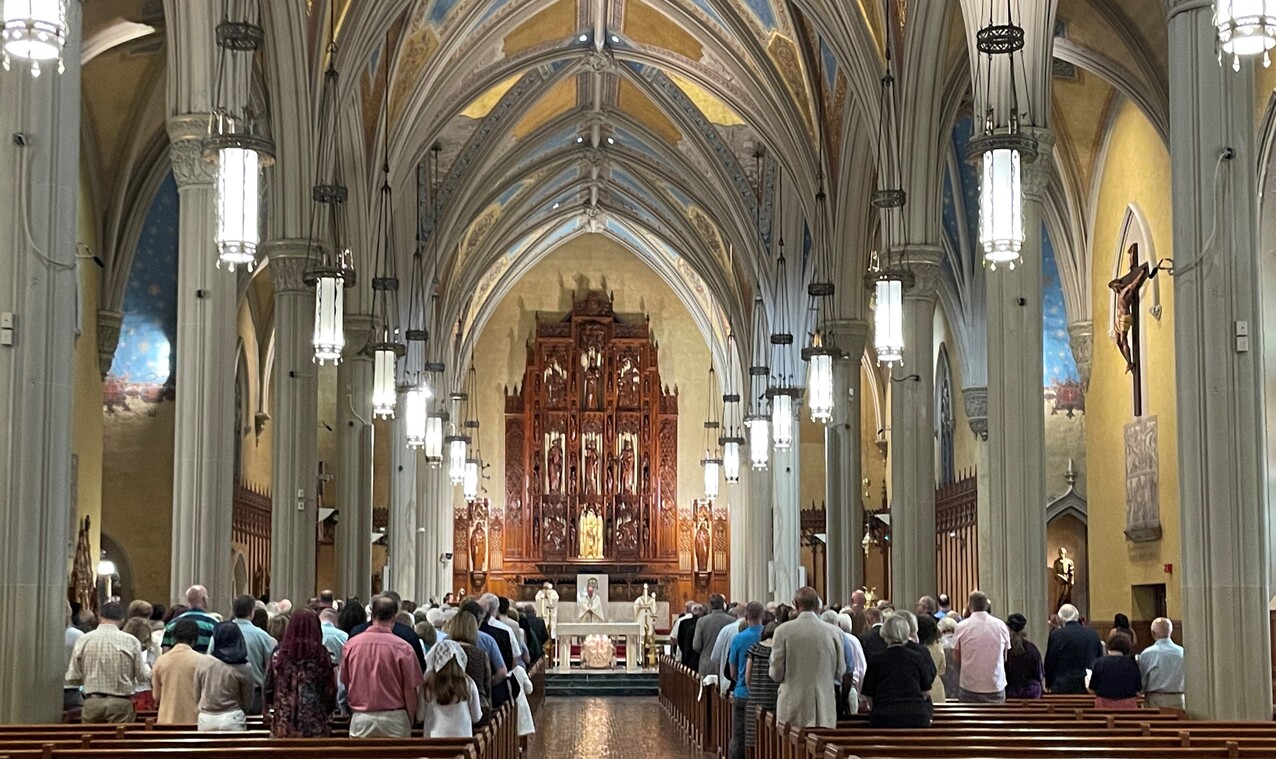 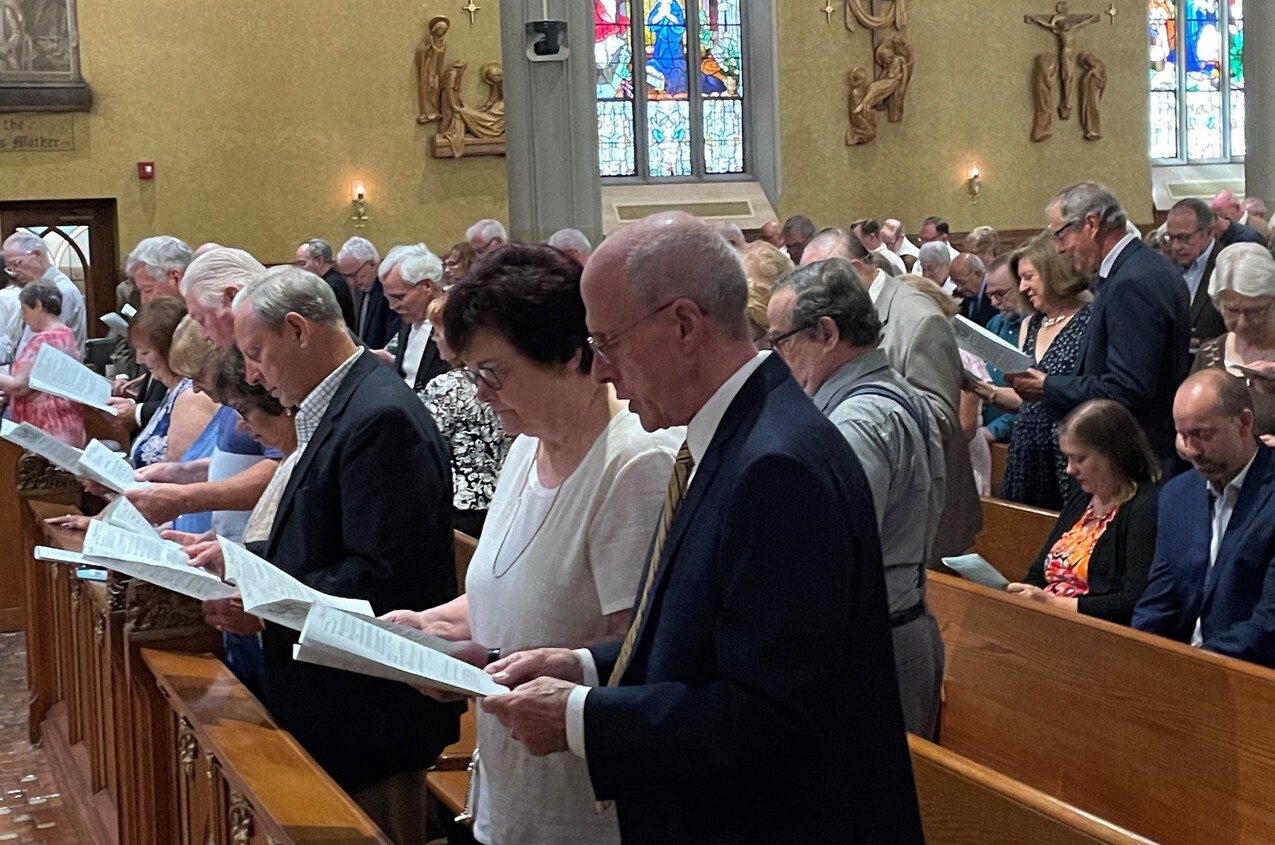 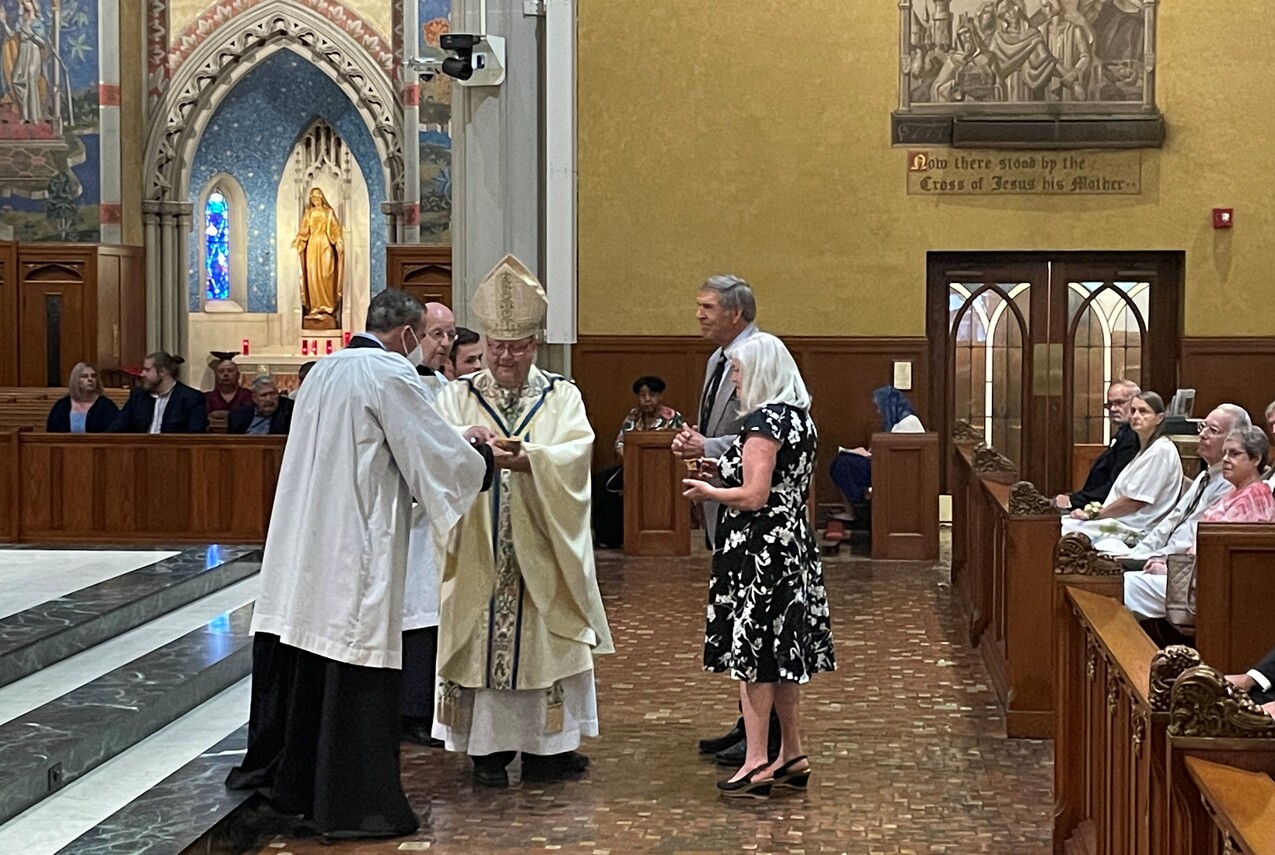 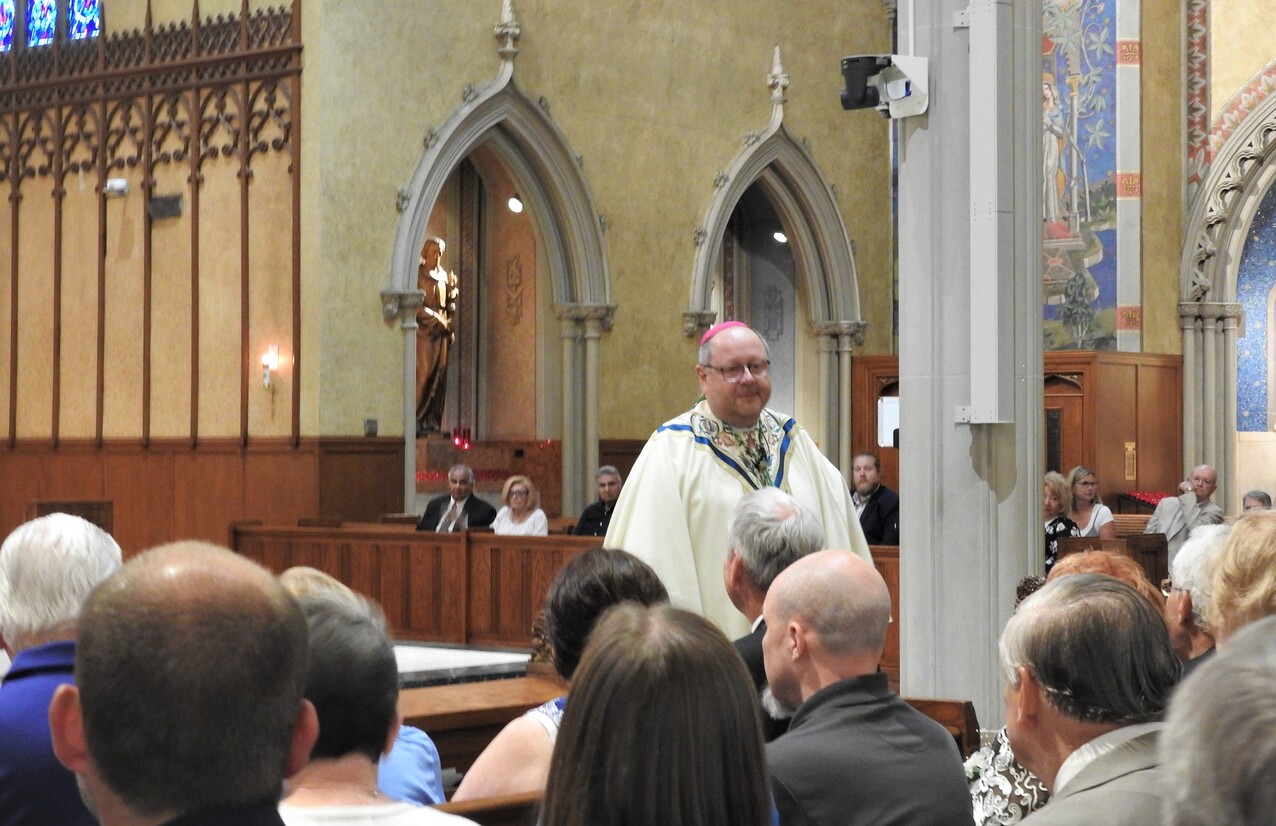 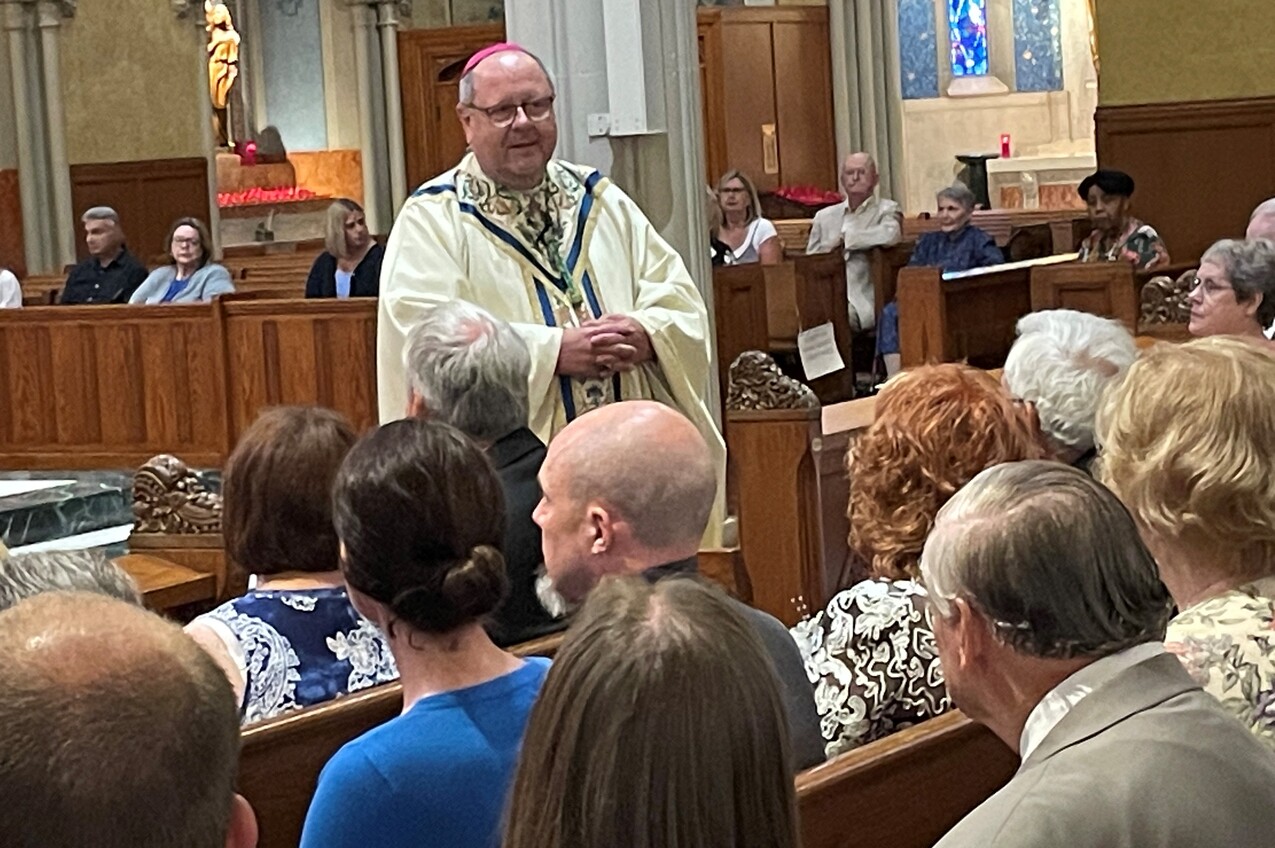 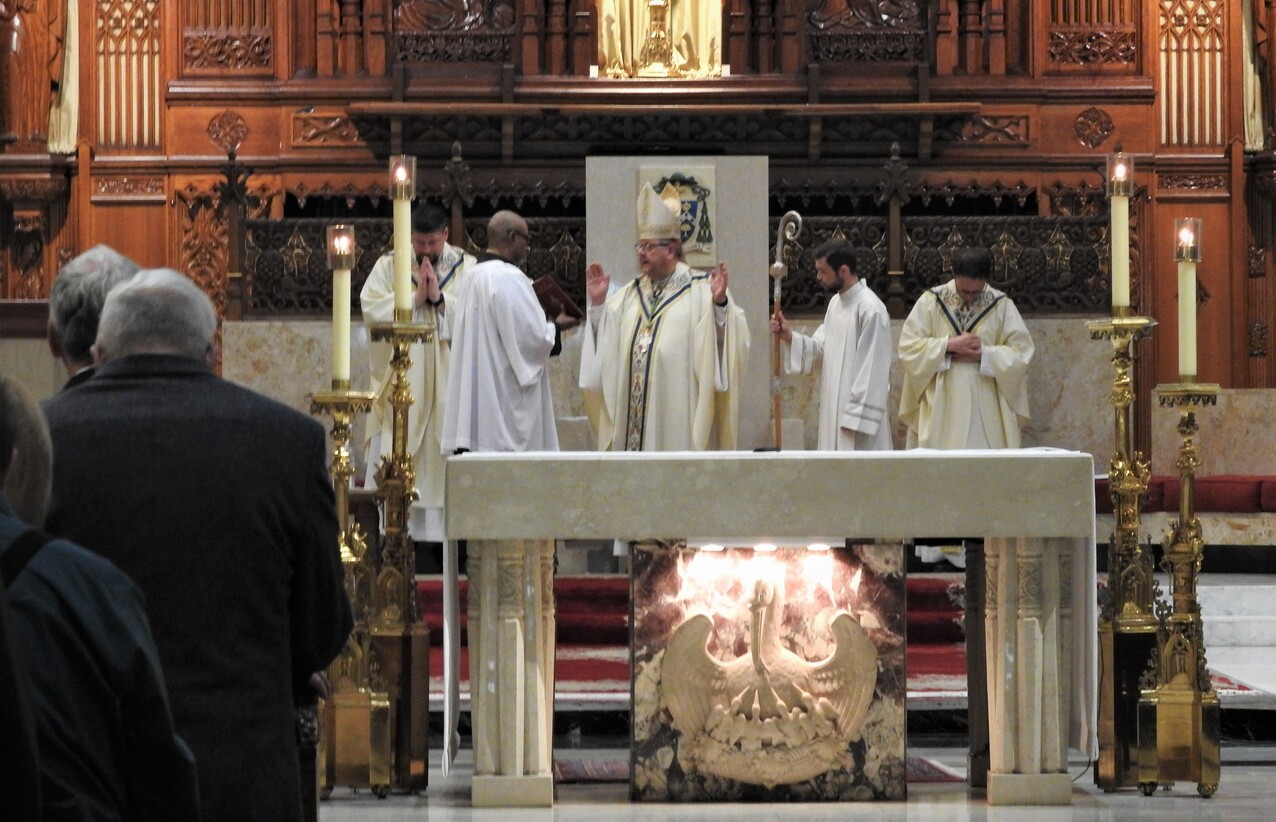 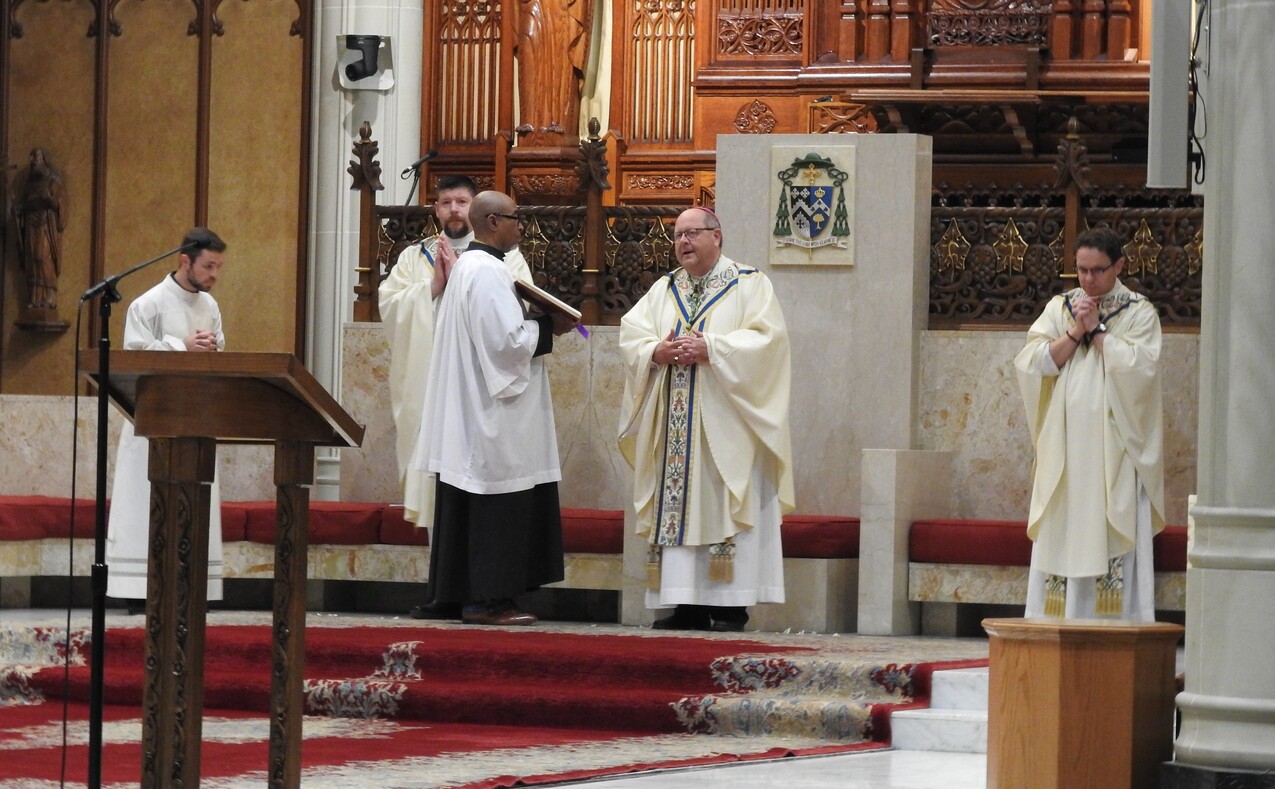 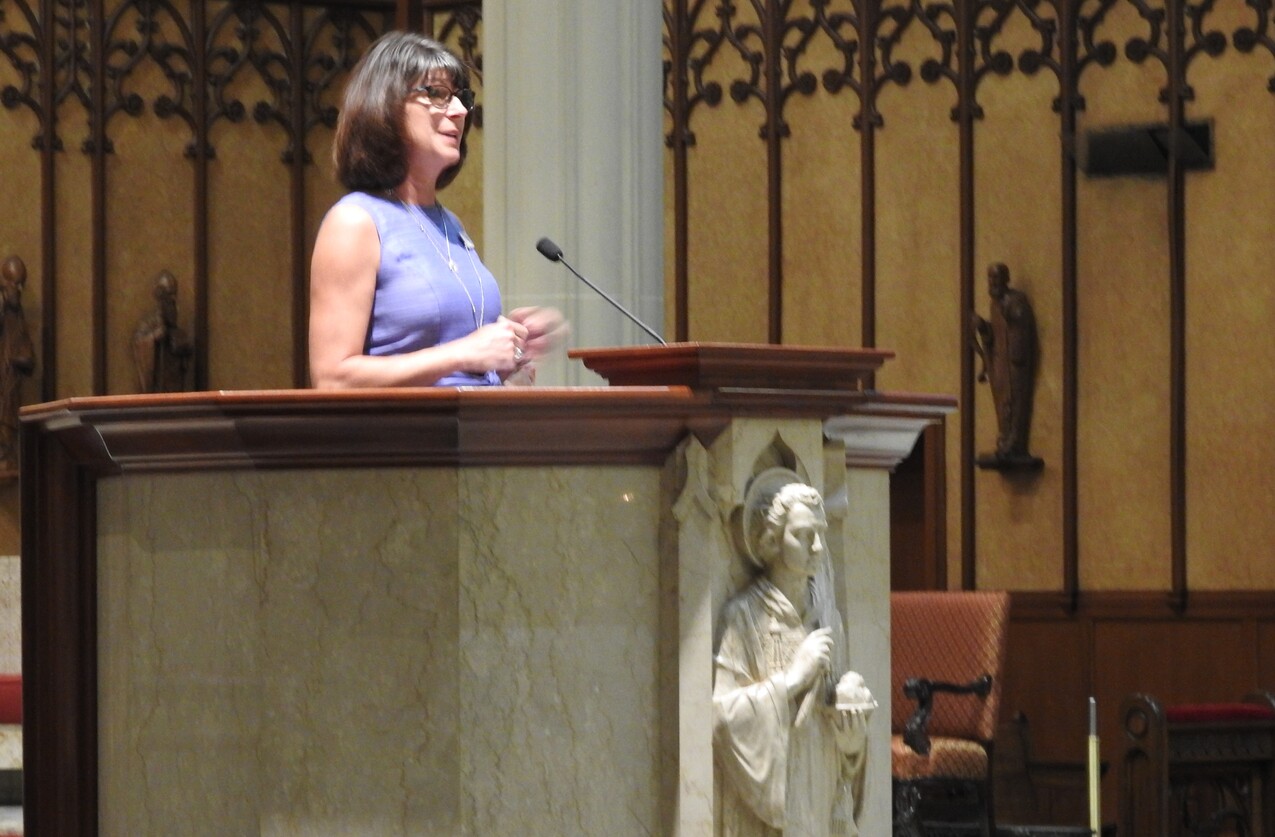 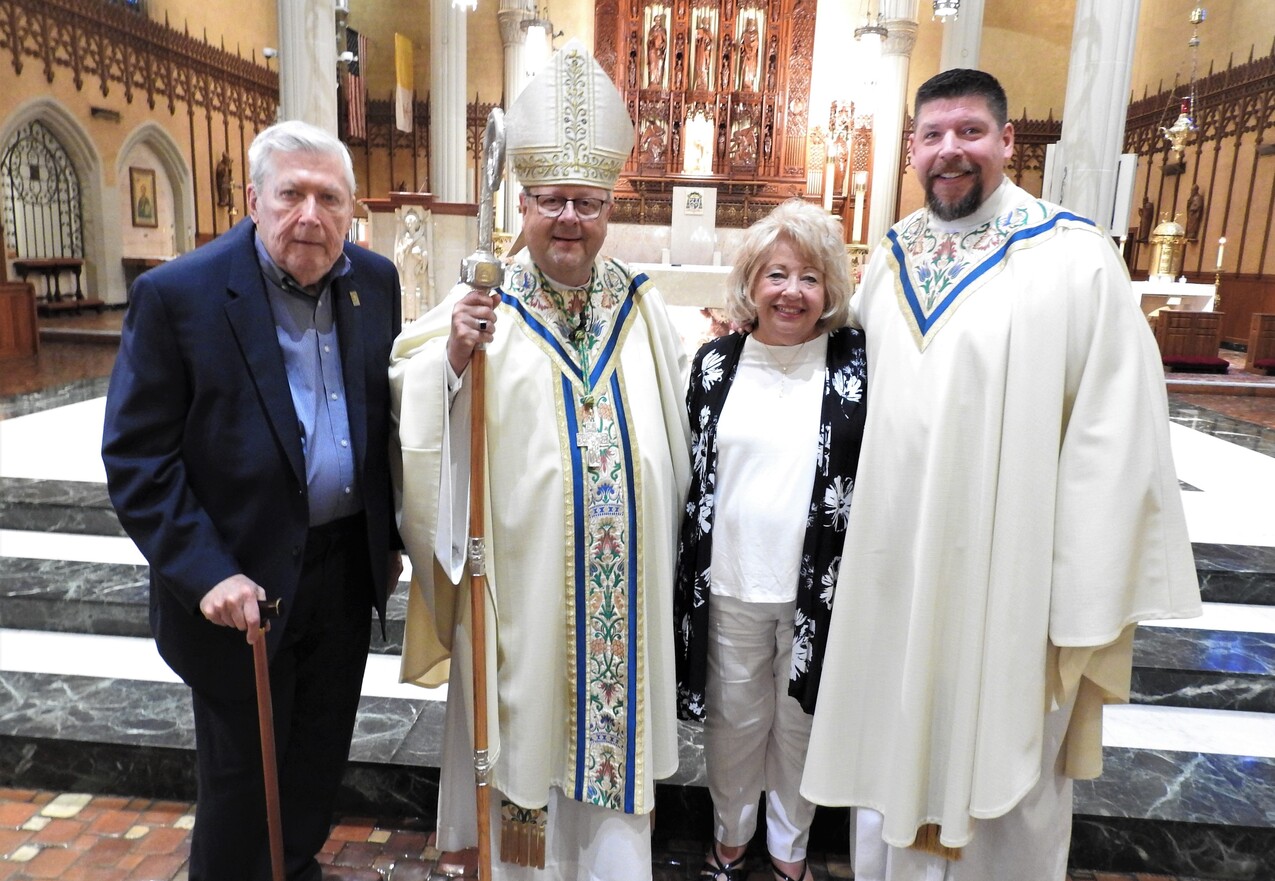 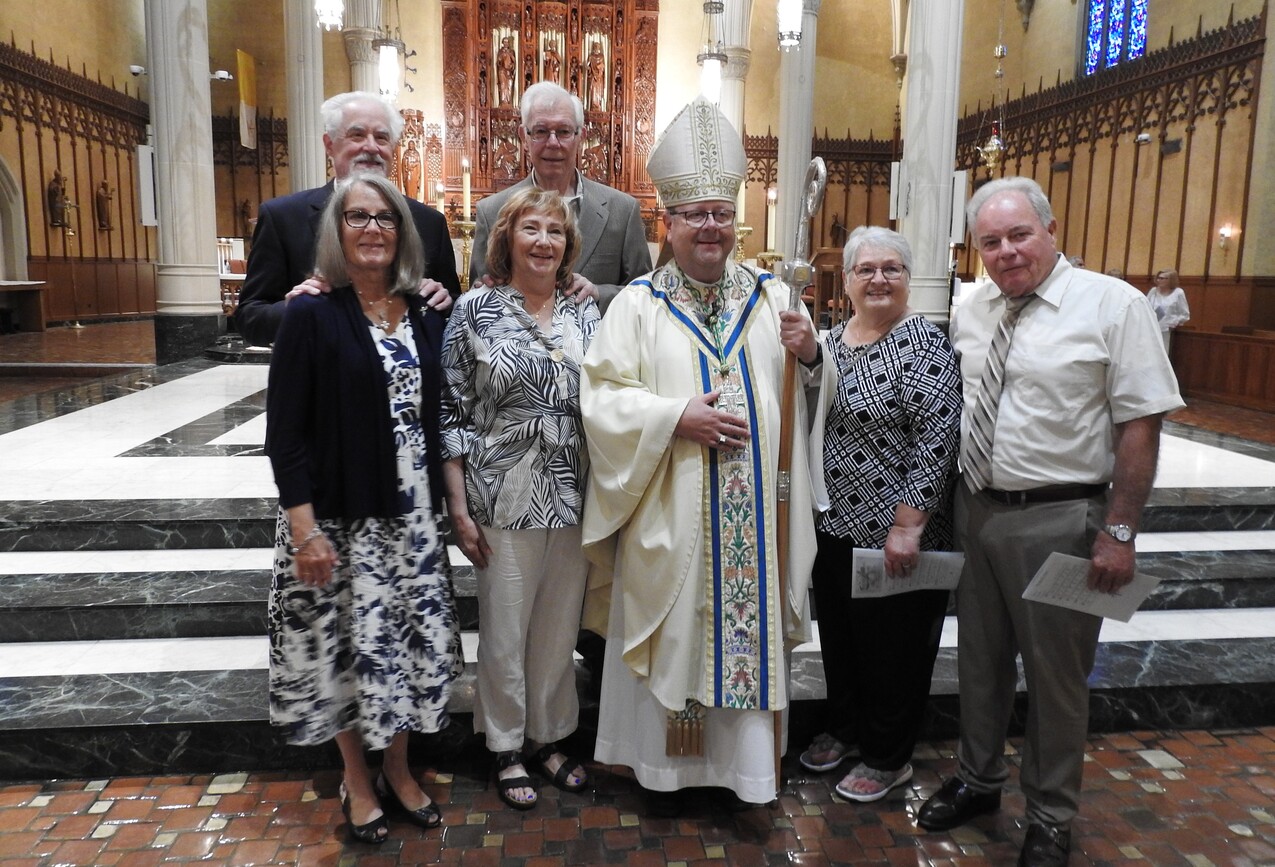 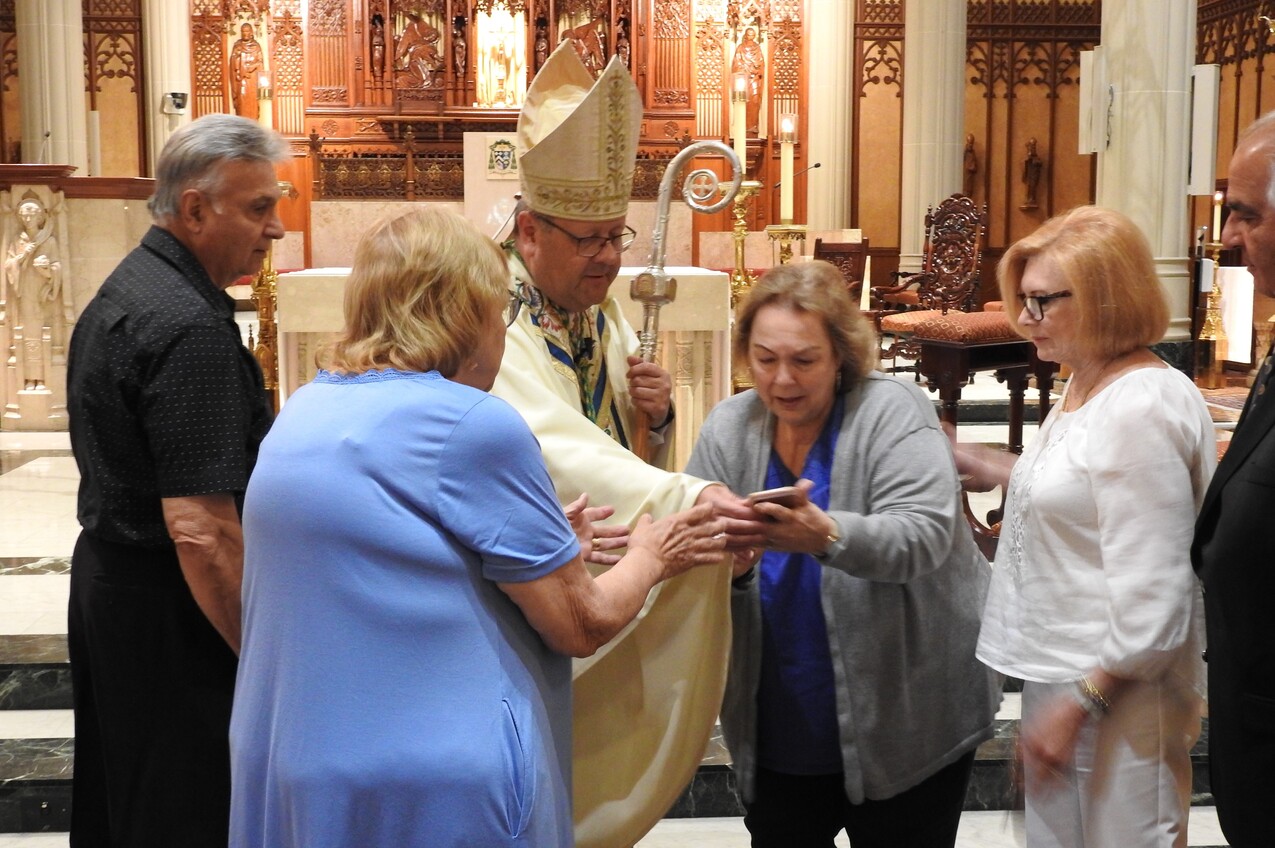 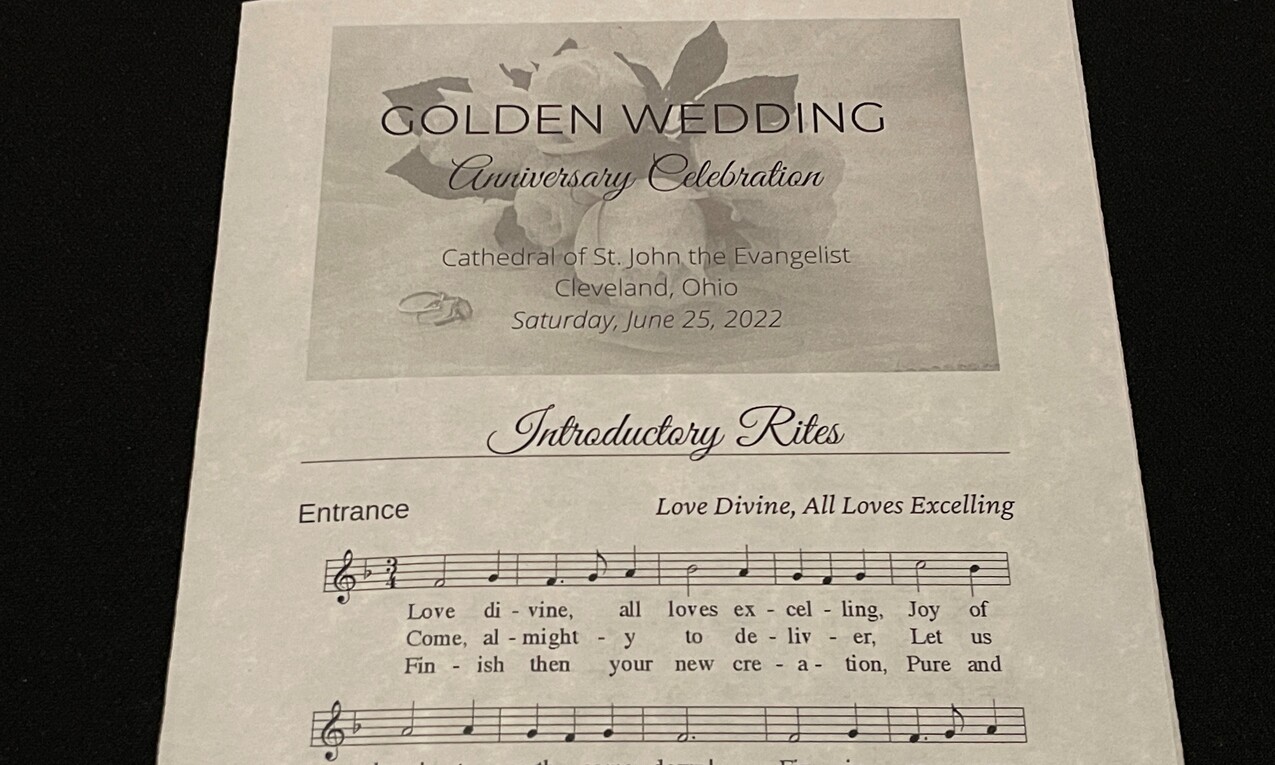 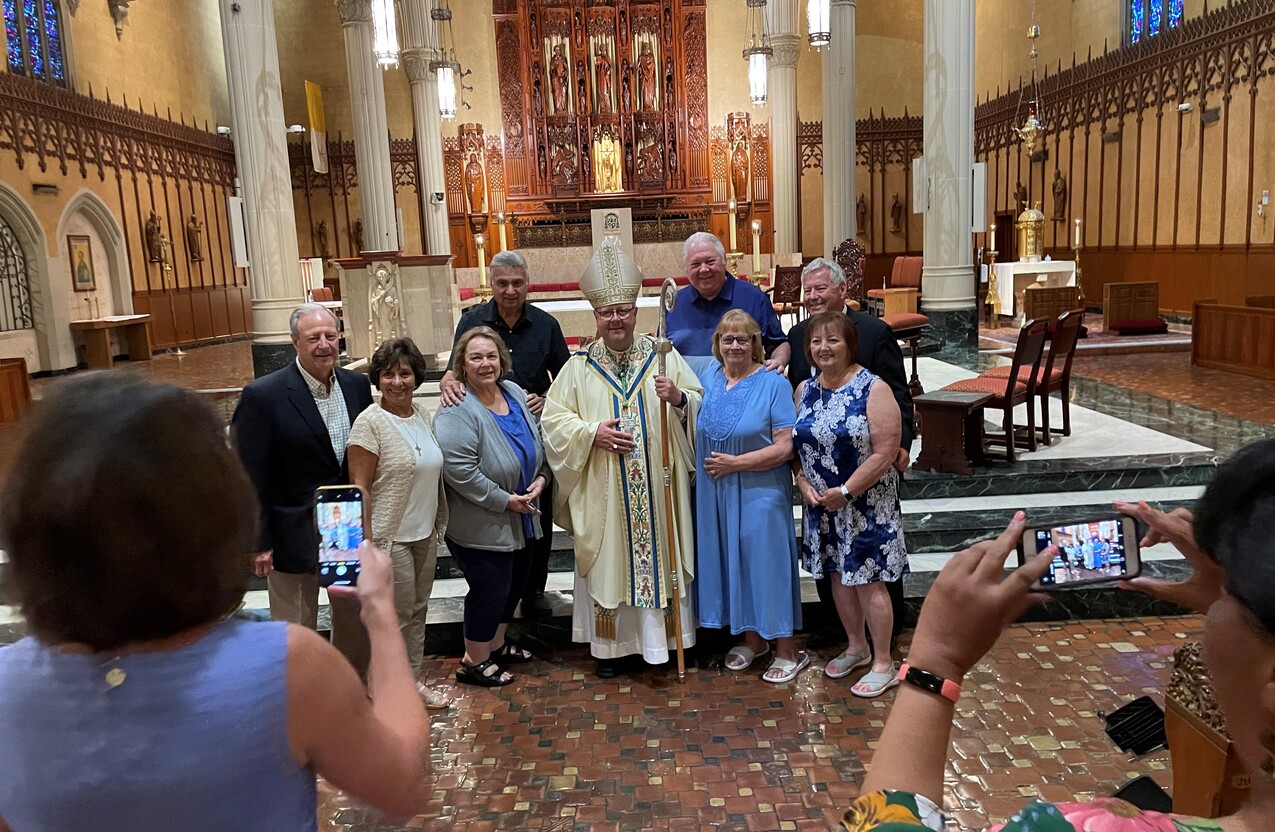 Nearly 200 couples registered for the diocesan 2022 Golden Wedding Anniversary Celebration. The event resumed June 25 in the Cathedral of St. John the Evangelist after a two-year interruption because of the coronavirus pandemic. Couples married in 1972 or earlier were invited to participate. The Mass was livestreamed and can be viewed here.

“This is one of my favorite Masses of the year,” Bishop Edward Malesic told the anniversary couples and their guests. Concelebrating the Mass were Father Damian Ference, vicar for evangelization and director of Parish Life and Special Ministries, and Father Chuck Butkowski, pastor of St. Adalbert Parish in Berea. His parents were among the golden anniversary couples.

The bishop shared the story of a man who was invited to a friend’s home for dinner. The guest told the host that he was touched at the terms of endearment he used for his wife of nearly 50 years. But the host caught the man by surprise when he admitted, “To tell you the truth, I forgot her name three years ago,” the bishop said, as the congregation laughed.

He took the congregation on a trip down memory lane, recalling gasoline was 32 cents a gallon in 1972 and a new car cost less than $4,000. It was the year of the Watergate break in and the Dow Jones closed above 1,000 for the first time in history. The Space Shuttle program launched and he mentioned a few popular TV shows, such as “All in the Family,” “Maude,” “Mary Tyler Moore” and “Sanford and Son. “We sat down to watch together,” he said, noting there were no DVRs or livestreaming.

Bishop Malesic also shared some of that year’s popular songs including Roberta Flack’s “The First Time Ever I Saw Your Face,” asking the couples if they remember the first time they saw each other. Eventually, they began to understand another Top Ten song from 1972, Nilsson’s “Can’t Live if Living is Without You.”

On their wedding day, he said the women might have related to Wayne Newton’s hit song “Daddy, Don’t You Walk so Fast” as they started down the aisle of the church.

As the couples started their lives together, the bishop said it likely wasn’t easy.

“Each of you could tell the story of your miracle of 50 years,” he said, asking them to think honestly about when they first woke up, looked at their spouse and wondered what they were thinking when they married that person.

“But, you echoed the lines of another Top Ten son of 1972 by Al Green, ‘Let’s Stay Together’ because staying together was what you had promised when you said you would take each other in good times and in bad, in sickness and in health, until death would part you. You made those promises to one another and meant what you said. Being here today is proof of that all of us to see. Again, not easy, but you have shown us that it is not only possible, but preferable,” the bishop said.

“As someone once said, ‘Love at first sight is nothing special. It’s when two people have been looking at each other for years that it becomes a miracle,’” he added.

He said the couples learned over the years what it meant to be husband and wife and they figured out that staying the course and remaining strong together was the best way to find happiness, which was found in caring for each other. “Isn’t that what love is all about, really?” he asked. Jesus shows us true love from the cross because in giving of ourselves we find the blessing of life.

No matter their differences of opinion, any tensions that come from two people spending time together in the same place, they supported each other, challenged each other, affirmed each other and became so closely united that they could not be separated, Bishop Malesic said of the couples. “God joined the two of you together. He made you to be one flesh that cannot be separated.”

As they grew older, the bishop noted the couples faced other issues, perhaps health, problems with their children, with their aging parents, etc. “You did your best to provide for your family during the shifting cultural and spiritual environment as you hummed another Top Ten song, ‘American Pie,’” he said.

Now as the couples enter the golden years of their marriage, he said they can share their story and “how you got from there to here, from 1972 to 2022. My guess is it had a lot to do with the words thank you, I’m sorry and I love you,” the bishop said.

In the day’s Gospel. Jesus said joy comes in loving as we’ve been loved, he said. “You have been loved by God and you have shared that love with one another and with us. It should give you joy to know you have meant so much to your families, to your neighborhoods and to your Church. You have shown us what love means,” Bishop Malesic said, explaining it’s not a fleeting feeling, but the decision to be with someone for a lifetime. “Jesus says it this way: No one has greater love than this, to lay down one’s life for one’s friends.”

He told the couples that is what they’ve done for a half century. “You have shown the greatest love by giving yourselves to each other, even laying down your loves for one another, changing what you wanted to do because your spouse wanted to do something else, worrying about your spouse in difficult times, wondering what you could do to make your spouse happier and sometimes sacrificing greatly for your spouse. This is the type of love that Jesus says brings joy to us.”

God started it all, the bishop said, but putting them in the right place at the right time. “This was your vocation, given to you by God – to love one another and to show us what God’s love is like God called you to be together as husband and wife to be witnesses of his love, a love that is enduring in thick and thin, a love that is persevering, a love that makes all of us a bit better for having witnessed it in all of you.

The couples received a special blessing and were invited to take photos with the bishop after Mass.

The event was organized by the diocesan Marriage and Family Life Ministry, headed by Terri Yohman.