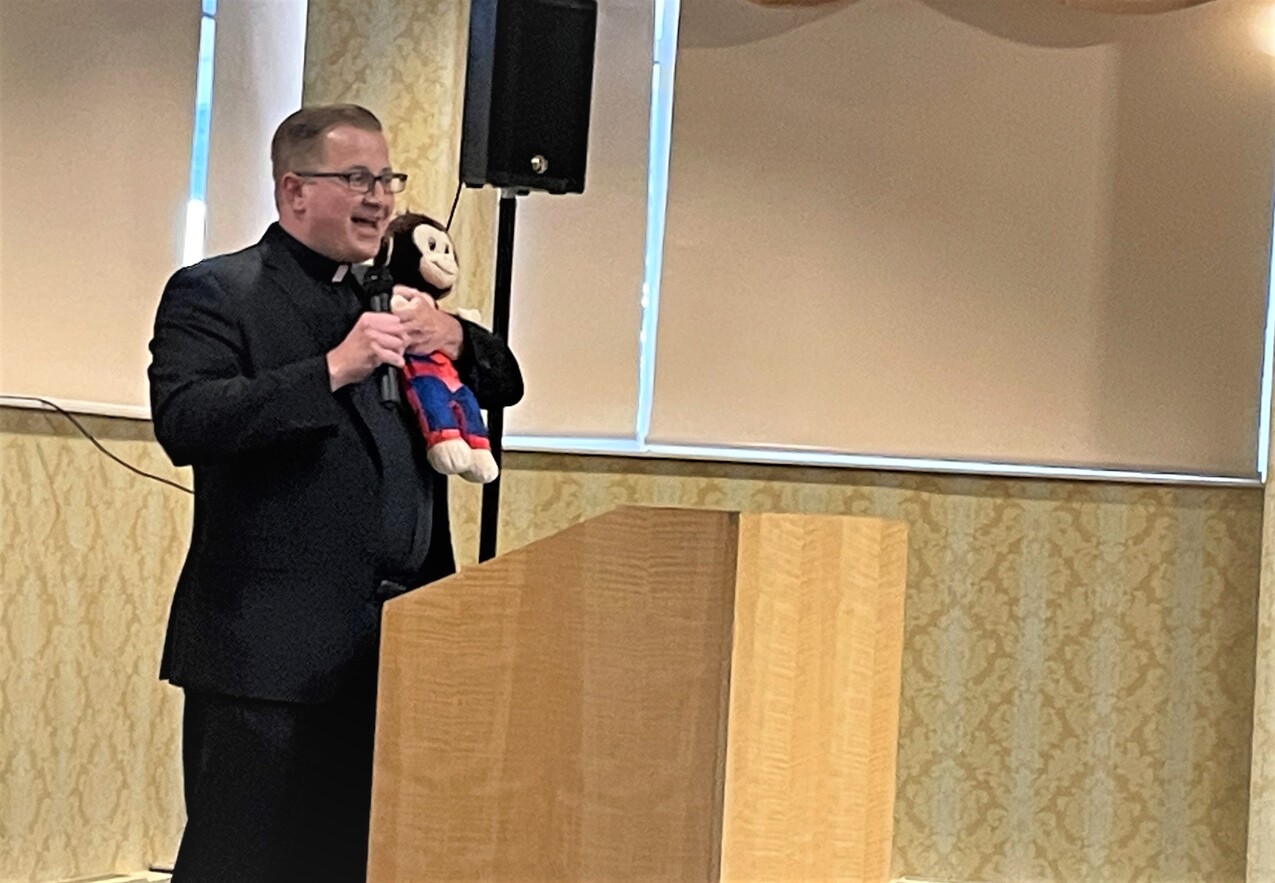 Mary Von Carlowitz, director of the diocesan Office for Human Life, and Father Chris Zerucha, pastor of St. Bernard and St. Mary parishes in Akron shared facts, thoughts and resources offered by the Diocese of Cleveland and other entities to help women with unexpected pregnancies.

Their recent talk to the Theology on the Rocks group looked at both the theological and practical sides of “Pro-life in a Post-Roe World,” a timely topic as Respect Life Month (October) is underway.

Father Zerucha focused on the theological aspects of being pro-life while he shared the story of his sister’s unexpected pregnancy and how it impacted his family. As someone who counsels those in difficult situations like the one his sister faced, Father Zerucha said the tables were turned when his family was the one struggling with the issue. It turned out to be a blessing, he said, referring to his niece and showing off a stuffed animal that contains a recorded message telling him she loves him.

“The inalienable rights of the person must be recognized in all cases,” he said, adding there must be sanctions for violating an unborn person’s rights. St. John Paul II staunchly defended the right to life, noting that mercy is available to those who truly repent. He questioned how a person can be OK with murder and under what circumstances.

Von Carlowitz looked at the practical side of things and how important it is to offer support and resources to someone struggling with a difficult thing like an unplanned pregnancy. 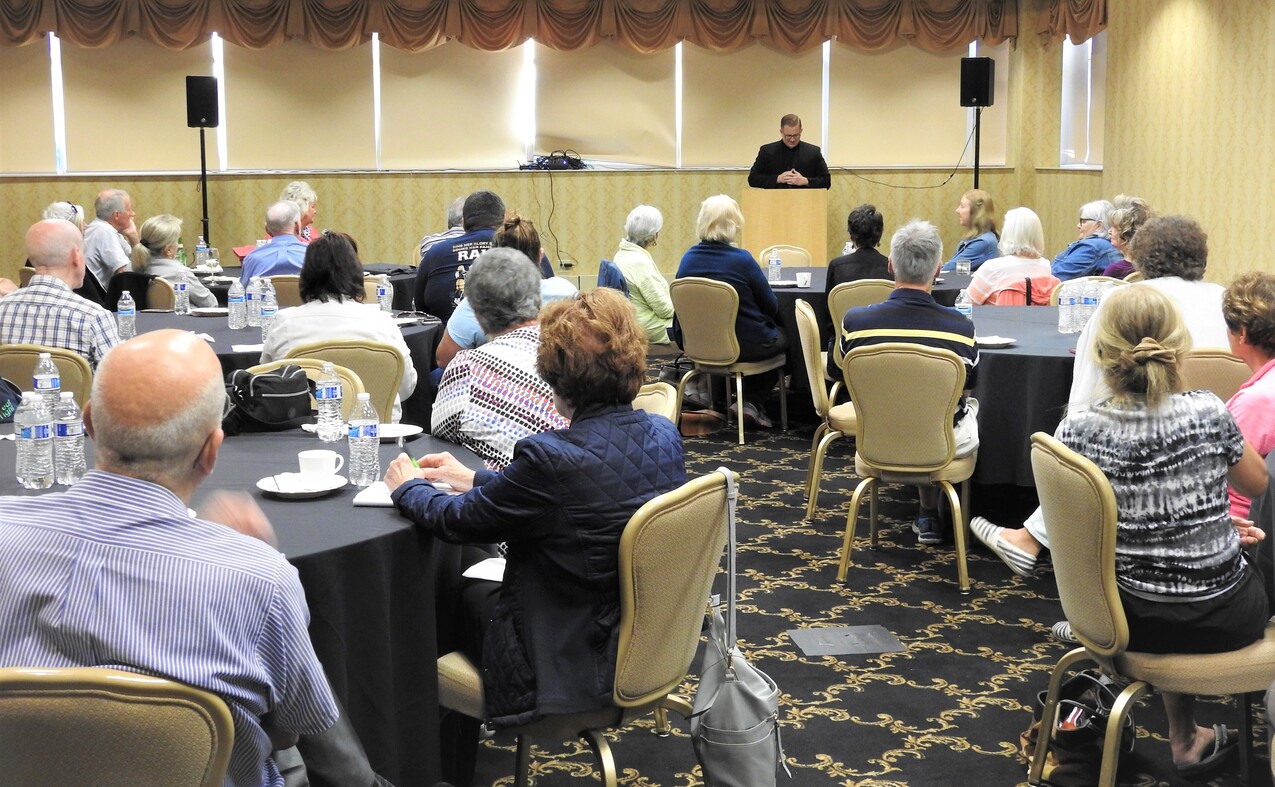 “I’m here for them when the rubber hits the road,” she said. Von Carlowitz noted the importance of family and how we must find it everywhere. “It’s important to see the face of Christ in all and to call each other by name, to recognize each other.”

We must consistently celebrate life in all forms and at all phases, Von Carlowitz said, including trafficking, the death penalty, etc. She also pointed out the importance of using the term unexpected pregnancy instead of crisis pregnancy and babies, not fetuses. “They are unborn lives waiting to be born,” she added.

Von Carlowitz, the mother of nine and grandmother of six, said her personal journey wasn’t easy. “We moved 15 times and lived in a hotel a couple of times. But so many people were there for us. We always found joy wherever we were at.”

Something as simple as providing a campership for some of her children to attend Camp Christopher to discovering the Christ Child Society and their willingness to help made a positive impact on the life of her family.

She pointed out Erin Hathaway, director of Zelie’s Home, a ministry that helps pregnant women in need thrive by connecting them with housing, job services and other support as they get back on their feet and care for their babies. Unexpected pregnancies can disrupt lives, but there are services and programs to help the mother and to protect the child.

Von Carlowitz said she happened to be in New York when the Dobbs decision was announced in late June. She recalled seeing anger and distrust, reminding the group it’s important to learn the facts and to know that life begins at conception.

She also shared the story of a young woman who was considering an abortion after becoming pregnant. The woman had hoped to become a doctor and felt that it wasn’t the right time to have a child. She visited Ivy’s Home with her boyfriend and was surprised to find it was like a spa. They discussed her options and took her for an ultrasound.

“In the bathroom, behind the mirror, was a prayer wall that was unseen,” Von Carlowitz said. After the ultrasound where the woman could see her baby and hear the heartbeat, she decided she couldn’t terminate the pregnancy. However, her boyfriend didn’t agree with her decision and left her alone. She was terrified to hell her parents. When she did, “her parents wrapped her in love,” Von Carlowitz said.

The woman delivered a healthy baby boy who is loved very much. “God isn’t done with me yet,” the woman said.

Von Carlowitz said the Dobbs decision returned the abortion issue to states, but added things aren’t over yet. Ohio had a trigger law banning most abortions that was set to take effect after the Dobbs decision. However, courts have stayed the law temporarily as the legalities are weighed.

“We must share what we know with others,” she said, adding, “We’re all imperfectly made but we share a great father.”

Von Carlowitz emphasized the importance of every parish having help for every mother who needs it. “Jesus told us to accompany people, including walking with mothers in need,” she said. There are many programs and resources available such as the Gabriel Project, Project Rachel, Bethesda House of mercy and more to help women wrestling with an unplanned pregnancy or in the aftermath of an abortion. “We should all know how to help and where to refer people,” she said.

“God’s mercy is available to all. Babies who couldn’t be born will be waiting for their mothers to hold them. God has a plan for every person, and fathers are part of that plan, too,” she added.

“Sometimes an issue seems so overwhelming but if we offer help, it will make a difference,” Von Carlowitz said. She shared the story of a pregnant woman who had a rundown car that wasn’t large enough for another child or another car seat, so she was considering an abortion. A sidewalk advocate connected her with a van and a car seat, solving her transportation crisis and the woman decided not to end her pregnancy.

“See the face of Christ in every person. That is so important,” Von Carlowitz said. “An unexpected pregnancy also creates unexpected opportunities for charity.”

Her office prepared folders filled with information and resources and is distributing fliers with QR codes to help connect women with important resources. The fliers/information cards will be available in restrooms and other places where women can access them. The Office for Human Life recently revamped its website and included additional resources and information. 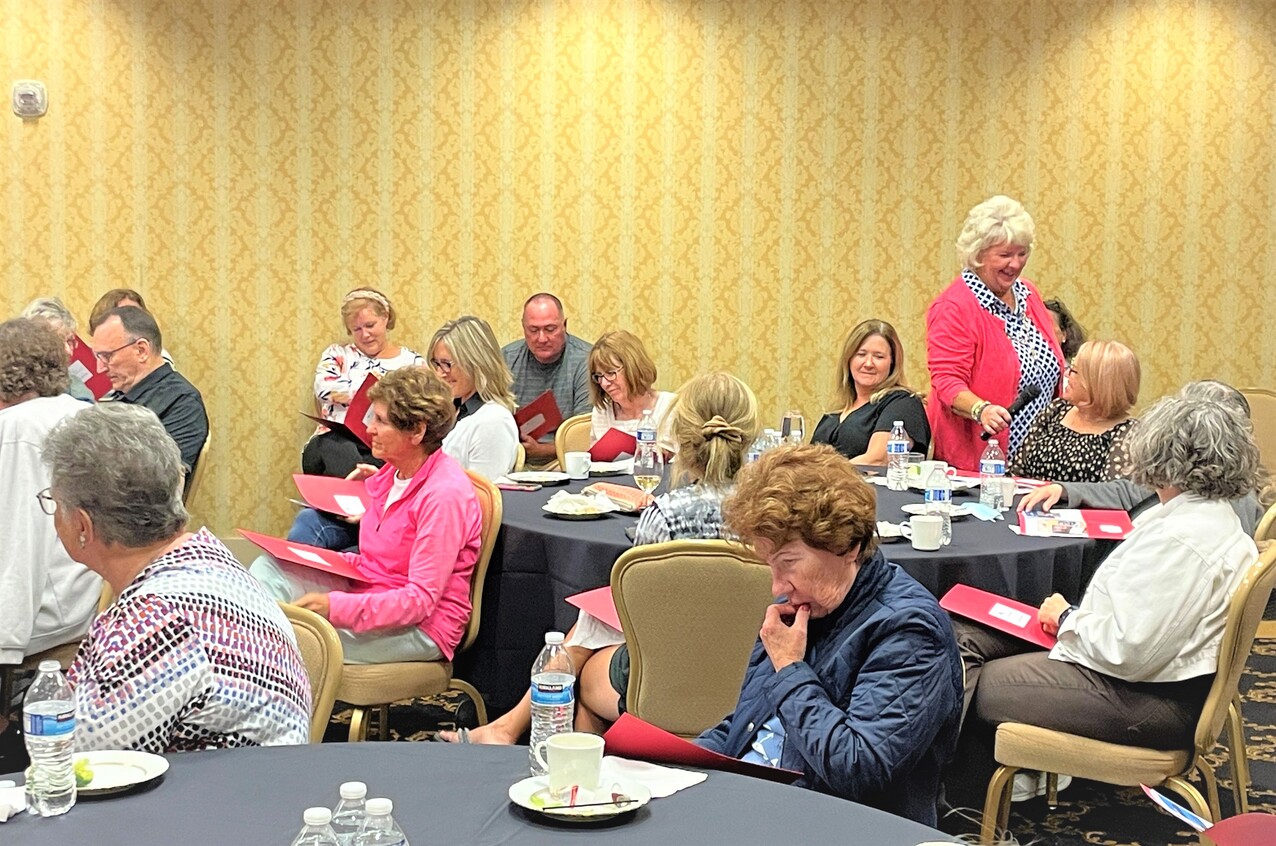 Von Carlowitz said there will be another March for life in January 2023 in Washington, D. C. One also took place in Columbus earlier this month. She invited people to consider participating, if possible.

Father Zerucha recalled how the parish where he was assigned during his sister’s unexpected pregnancy supported her, sending cards and messages of support, something she never forgot.

“Walking with moms in need is a process,” Von Carlowitz said. And women who opted for an abortion may still be struggling with the aftermath years later, so there are programs and resources available to help them, as well.

Father Zerucha reminded the group again that God’s mercy is available to all who seek it and are willing to accept it. He and Von Carlowitz said it’s important to be sensitive, pointing out Americans have spent nearly 50 years operating under the Roe v. Wade decision that legalized most abortions.

“We have lots of work to do to show the other side of the story,” Von Carlowitz said.